The backcountry is a necessity for me. It offers salvation, quiet stillness, and a childlike wonder when all of life’s chaos gets too loud. But even here, out amongst the evergreens and birch trees, the granite cliffs and red clays, peaceful serenity isn’t guaranteed. The air can be punctured by internal-combustion motors. When that happens, my quiet vanishes, and I return to the workaday world. 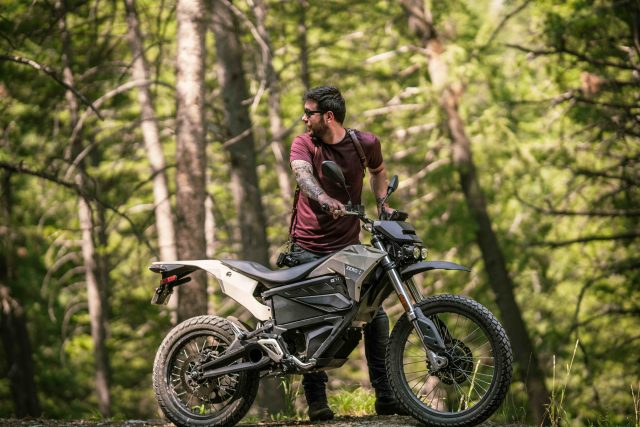 Internal combustion has dominated solo transportation for decades to the point that they’re inescapable. These machines are bred to get you damn near anywhere you point their tires. They conquer mountains and streams and every hard enduro course from this side of the Mississippi to Romania. They offer access that few machines outside of a helicopter can, and I love them and their capabilities most days. But these piston-driven machines ruin the peacefulness of the woods. Zero’s all-electric dual-sport FX motorcycle doesn’t share those issues and allows the rider to create a bond with the environment with childlike wonder. 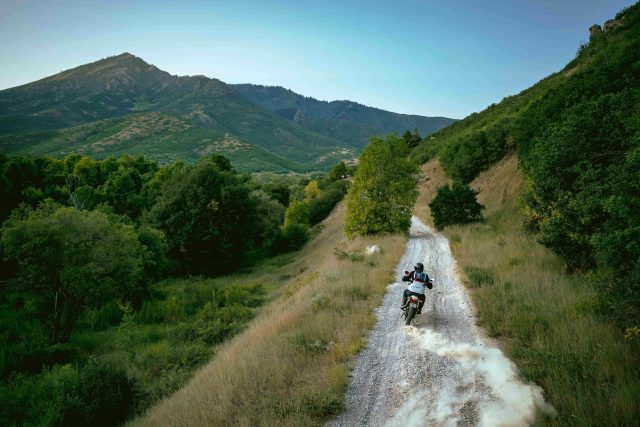 I’ve driven electric cars and ridden electric motorcycles before. They’re quiet, fast, and feel eerily like modern steel rollercoasters—at least when you’re clipping apexes on paved mountain roads. But there’s something about running through tree-lined single-track trails, climbing rocky passes, and searing across grassy fields in near-complete silence that opens your mind once again to the wonders around you. It allows you to, lose your mind, but find your soul,” as John Muir wrote. 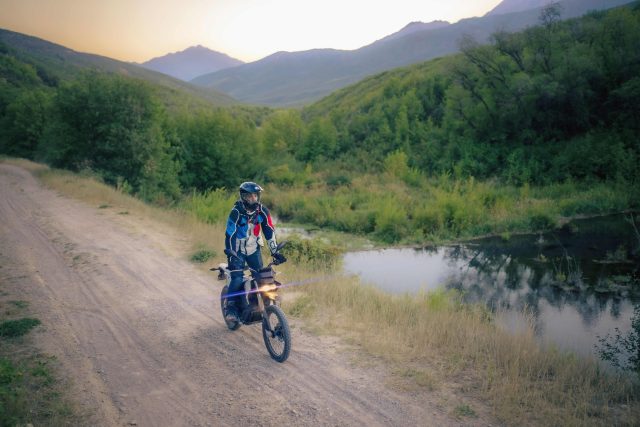 Zero says its machines are the “next step in motorcycle evolution.” In that case, I don’t think Zero specifically set out to reclaim the wilderness for off-road motorcyclists. I think the company just wanted to make rad motorcycles that happened to be electric and push the boundaries of electric technology in the motorcycling world. But after spending the last two months with the Zero’s keys in my pocket, the FX does feel like an evolution. Not in the sense of technology or changing the act of riding, but an evolution in how you experience the world around you.

Flying through the national forests near my house, aspen leaves flowed in the wind, branches snapped underneath the motorcycle’s tires, bird’s cawed, elk bellowed, and grassy reeds hit my boots. All in abject silence. It felt good. It was cinematic, as if I were in a movie scene scored by Hans Zimmer or Steve Jablonsky. The FX transported me back to my childhood. 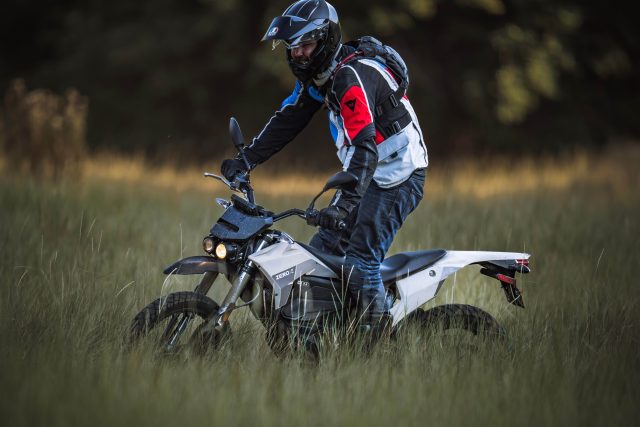 I remember days as a kid when I didn’t see another person from morning until dusk. Dashing off into the large forest that rose from behind my childhood home, I spent my days lost in its confines. I found creeks and lakes, climbed trees, and ran through open grassland, blades of grass slapping my chest, arms, and legs. And nature’s sounds filled my ears. I learned so much about the outdoors by just listening to it while I ran. I haven’t found many ways to relive those memories as an adult, but with the FX, I was back to exploring for the sake of exploring. 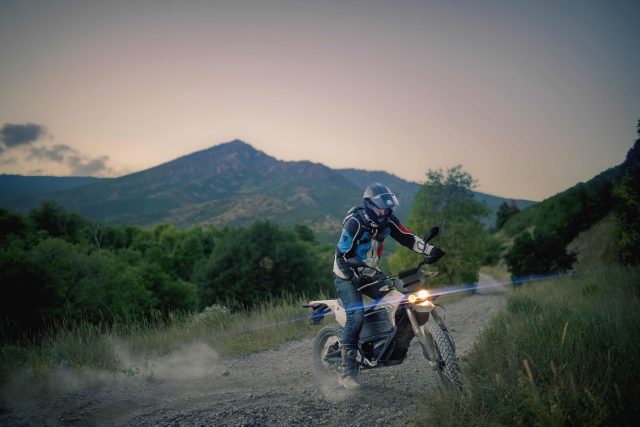 Exploration is what the FX does best, even with its Pirelli MT90 A/T dual-sport tires, as it went everywhere I aimed. I climbed rocky inclines, splashed my way through water crossings, kept the front end up in mud and silty dirt, and scaled mountains. I rode as I ran in my youth, though it has better range than my Skittles-fueled child legs. 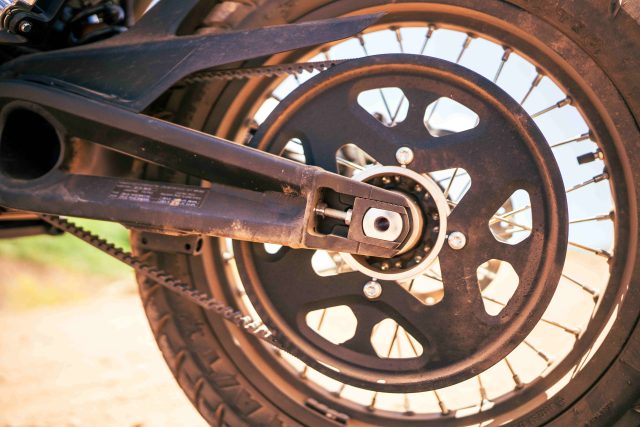 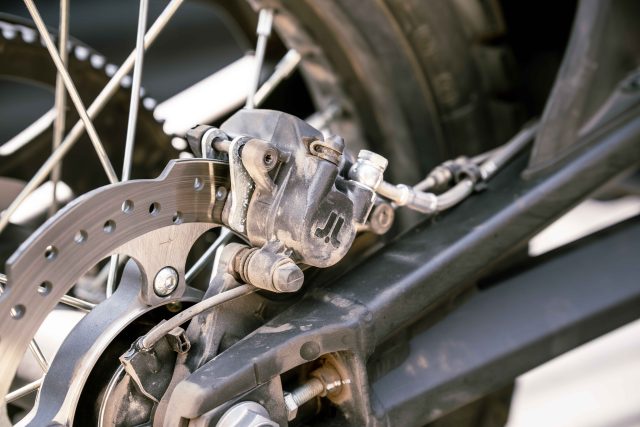 The FX’s 7.2-kWh battery pack is good for between 60 to 80 miles of off-road range, depending on the rider’s stature. Although 40 horsepower doesn’t sound like much compared to today’s middleweight ADVs pushing 100 ponies, the nearly 80 pound-feet of torque makes blitzing your way through any level of off-road trail easy. Control of all that twist is extremely manageable, though. Although there are preset torque settings in its Eco and Sport ride modes, its Custom setting allows you to fine-tune where peak torque comes in. That made it simple to pick lines and stick to them, even on more gnarly trails. 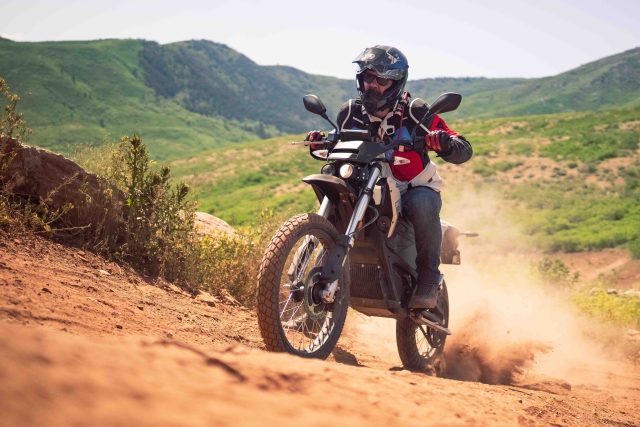 Suspension is handled by Showa both front and rear and gives you 8.6 inches in the front and 8.9 inches in the rear to play with. I’d like more, but again, Zero’s mission for the FX wasn’t to be an off-road wunderkind. It’s firmly a dual-sport, and the aftermarket exists. I’d personally swap the belt for Zero’s chain kit for more rugged durability, drop the dual-sport tires for something akin to Pirelli’s Scorpion Rally series tires, swap out the suspension for more travel, and put a front fascia/light kit on to lean heavily into a Dakar aesthetic. 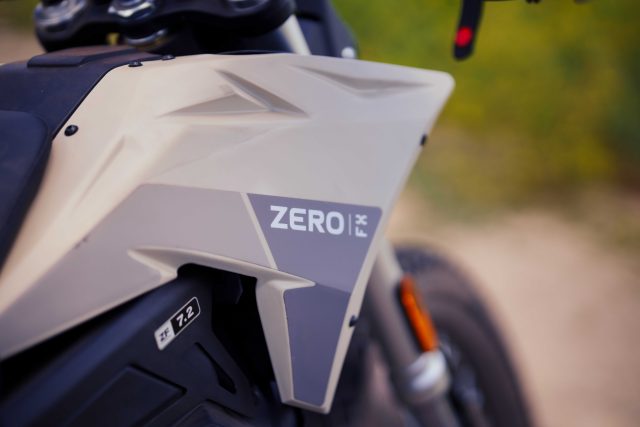 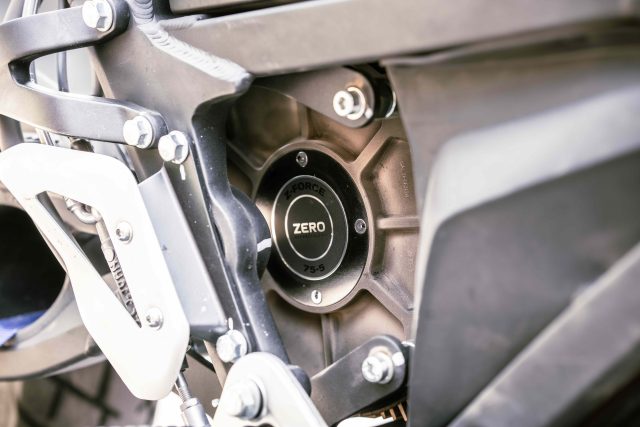 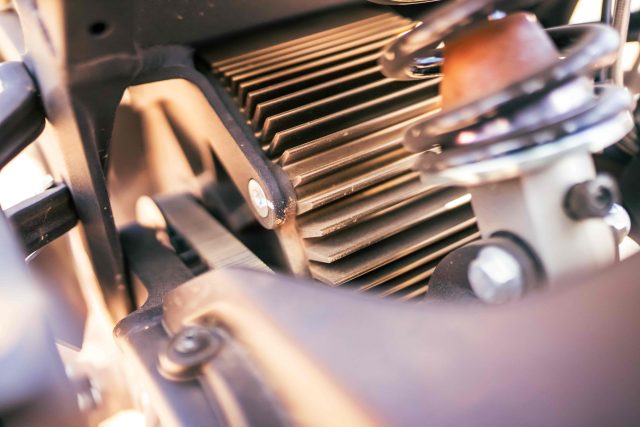 There’s also peace of mind with the Zero. Not that you won’t encounter breakdowns—I snapped a snapped belt and picked up a nail in the tire—or just the reduction in maintenance, but the peace of mind you won’t accidentally ignite a record-setting wildfire. Our community is so fearful of small sparks that could reduce Bureau of Land Management (BLM) territory to ash that sometimes we have to forgo our adventures or pay extra attention to our machine’s vitals. But there’s no fear with its all-electric powertrain. You could drop it on the driest brush you’ve ever seen, and you’d be safer than you would be at most gender-reveal parties. 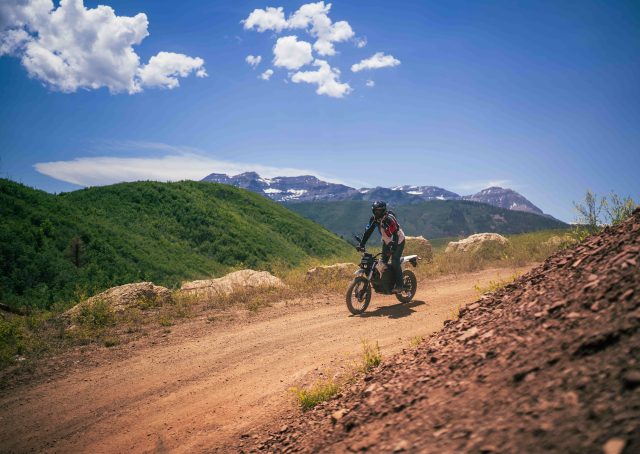 I will point out that the FX isn’t competing against things like Ducati’s DesertX, Yamaha’s Tenere 700, or BMW’s F850 GS Adventure, so get those out of your mind. It’s not a true ADV. It more closely resembles Husqvarna’s 701 Enduro or any of Honda’s CRF series dirt bikes in both range, comfortable seat height and riding position, overall look, and price ($11,995). They’re light machines you throw into the back of your pickup and haul out to the wilderness. I live close enough and have a truck, so the Zero’s range was never an issue. When I went exploring, I didn’t feel consumed by range anxiety. I couldn’t go out into the woods for days on end. I’d take something a little more stout for that anyways.

But that’s not what this motorcycle is about. 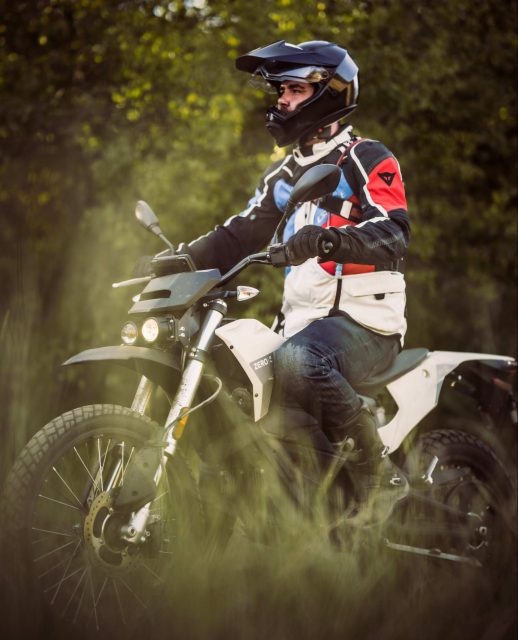 There are few things as wonderfully peaceful and exhilarating as silently riding the Zero FX through lush, dense forests and open grasslands. In a world that so often pushes you to be an adult and hold your breath, the FX lets you exhale and reconnect with that 10-year-old kid you used to be. You’re free to explore and rediscover your sense of adventure atop its saddle and truly immerse yourself in the environment around you. You’re not just a visitor, because riding the Zero FX, you’re offered the opportunity to be a part of it.

Jonathon Klein is currently the managing editor of The Drive, using his decades of car expertise to stoke a yearning for adventure in its readers. He’s been known to scribble pretty words about the foster care system, adoption, tattoos, sex, life, outdoor gear, adventures, food, and technology. In his travels, he’s interviewed Jeff Goldblum and Killer Mike for The Drive, jumped Aston Martins for Automobile Magazine, clocked 200 mph in a McLaren 720S for Playboy and sampled his best life behind the wheel of a Ferrari Dino Evo for Road & Track. You’ll find his writing in Field & Stream, MotorTrend, PopSci, The Manual, Task & Purpose, Autoblog, Yahoo, Motor1, Robb Report, RideApart, and others.