I woke up to find my tent in my face. Why had my shelter collapsed, leaving me wrapped up in a lasagna of damp nylon? I lay motionless, listening for any clues that might suggest the cause of my predicament. It was early and quiet, but not too still for the competing solos of birdsong. The clear notes faded into the bush, giving a sense of space, vastness, and emptiness. There was nothing for the sound to reverberate off of, just the enormity of the sky above.

I wriggled out of the tent after finding my clothes and locating the zipper to the door. Standing next to the crumpled pile of green fabric, slowly waking up, I surveyed the situation. The guylines had been ripped from the ground. Some tent stakes were still in the dirt; others had broken free with their cords. This was a deliberate act.

Walking around the crime scene, it suddenly dawned on me, just as the sun glinted through the acacia and mopane trees. All around my tent were dinner-plate-sized depressions in the ground, many overlapping. They extended a few meters on either side, a broad swath of footprints leading to the bank of the Chobe River. I had pitched my tent in the center lane of the hippo highway leading to the water. During the night, a herd had taken their usual route and finding a new obstruction in their path, simply trampled over it. Somehow I had slept through the whole episode.

We all have to start somewhere. For everyone, there is a pioneering trip, the introductory taste of gravel travel that reveals a new world of wheeled exploration and leaves us want- A Scandinavian in hot pants and a hippo brigade inaugurate a young man into a lifelong pursuit of adventure. ing more. For many of us, it’s a weekend camping outing or even a road trip with civilized accommodation. I was lucky and took my plunge headfirst into the deep end: two weeks in Botswana. Only I had zero preparation. I had gone camping a few times previously, but my command of bushcraft and grasp of wilderness travel skills were essentially nil.

I was living in Zimbabwe at the time, and my parents wanted to see the Kalahari Desert and the immense, pristine game parks of Botswana. Not being experts either, they booked a trip with what, looking back, might have been called a pirate guide service. Permits? Indemnification forms? Proof of vaccinations? Who needs them? This was just the start of the adventure.

My first clue should have been the vehicle for the trip, but being the rookie, I didn’t know any better. Now, I know. It was a Land Rover Series IIA long wheelbase, its faded limestone paint blending into the pale sand. It was pretty close to stock: no slide-out fridge, no awning, no slick drawer systems, no dual battery setup, no solar array, or multioutlet USB chargers. In fact, it had none of the accessories and accoutrements whose accumulation has seemingly come to represent the purpose of overlanding. The only modifications were a flimsy roof rack and an auxiliary fuel tank.

Our guide introduced himself as Tor. He was Swedish. It didn’t occur to me to question what a Scandinavian was doing guiding wildlife safaris in the Kalahari. Tor was a lot like his Land Rover: old-fashioned, temperamental, and minimalist. His lanky frame moved with the easy grace of one unburdened by the complications of modern life. Like his Landy, Tor was a basic model from an analog era. Most of the time, he strode barefoot through the bush (snakes, thorns, and all), clad only in a miniature pair of shorts that would have made Magnum, P.I. look like a Los Angeles Laker. His sinewy muscles were taut under a roughened layer of deeply tanned skin. The sustained intensity of the African sun lingered on his body, his clothing, and his paint job.

Tor was alternately gruff and taciturn. After a few days of bouncing through the dust on squeaky leaf springs with him, I wondered what made Tor tick. I think he was a misanthrope. He didn’t seem to like people, and he had little patience for a young American ignorant in the ways of the bush. My theory was that he had grown frustrated with structured first-world European society and had sought a life of solitude in one of the emptiest, most beautiful places on the planet. Out here in the desert, he had found a home in the company of his Land Rover and the elephants, perhaps finding the closest thing he might call to happiness.

I, too, found the company of elephants. One night, a lone bull walked through our campsite. In itself, this was not unusual. This particular elephant, however, took an interest in a tree on the edge of our camp and decided to stay. He huffed, snorted, and shuffled around in a delicate waltz that looked impossibly graceful for an 11,000-pound creature, and he made a meal of the tree—which happened to be right next to my tent.

Not only was I once again in imminent danger of being crushed by an enormous wild animal, but I also slept through the entire visit. My parents were gravely concerned in the morning. Were it not for the worried looks, broken branches, and the disturbed ground, I wouldn’t have believed their story. All they could do was watch from a safe distance and hope the elephant wouldn’t pirouette over my tent. The journey took us deeper into the Kalahari. Days would pass without us seeing another person. The few vehicles we came across always stopped for the drivers to exchange information about route conditions and wildlife sightings. More than once, we drew incredulous stares and comments along the lines of “You’re brave to be out here in that thing. What year is it—1969?” Tor retorted, “1971.” Off we went along the sandy track.

One afternoon in the penetrating heat and hypnotic drone of insects, we took a foray on foot to track some buffalo. They were huge as well. This time I was awake, and they didn’t try to stampede over my tent, so I considered the encounter a success. Back at the Land Rover, the engine wouldn’t start. Tor fiddled around a bit, turning the key a few times, operating primitive controls protruding from the stamped metal dash whose functions I did not understand.

Upon further investigation, Tor announced that we had run out of petrol. Unfazed, he explained that the vehicle had a second tank for exactly this situation. Tor fiddled around again, flipped more switches, and a cloud of consternation descended over his brow like the first storm of the rainy season sweeping across the veldt. As best he could tell, the fuel pump in the auxiliary tank wasn’t working. Now what? We waited, presuming that someone would come along—eventually.

By this point in the trip, our food supplies had dwindled. Rummaging around in the metal pantry box, the most readily edible nourishment we could find was a tin of Vienna sausages. My dad opened the can and drew out a long, slender, Pepto-Bismol-pink sort of hot dog. Impaling it with a knife, he reluctantly took a bite and passed it around. “Baboon pricks” was how he described them before we had finished chewing. Finally, another vehicle did pass by, and Tor was able to siphon fuel from the second tank to the first. The Landy sputtered to life, and we made for Maun, the main outpost between the central Kalahari and the Chobe. I was done with Tor but had fallen in love with his rickety Land Rover and the places it took us.

A month earlier, I had no idea what lay ahead. My parents told me about their plans and laid out the options. “We’re going to take a trip into the desert in Botswana,” they said. “If you want to come, you can. Before you make up your mind, you must understand that it will be hot, uncomfortable, dusty, bumpy, and difficult. You won’t like the food. But it will be an experience that you always remember. If you don’t want to go, that’s fine. You can stay in Harare with your grandparents, and they will spoil you rotten. What do you say?”

I answered without hesitation. The choice was always going to be the desert. Not only would my third-grade classmates be livid with envy, but ultimately my parents were right—yet only in part. It was a memorable journey to be sure, but none of us could have anticipated down what path that creaky Series IIA would point me. From that first taste of the wilderness, a lifelong obsession sprang. Thirty-six years later, I’m still driving across the bush in a Land Rover. As for the tent, I hope I have that part figured out now 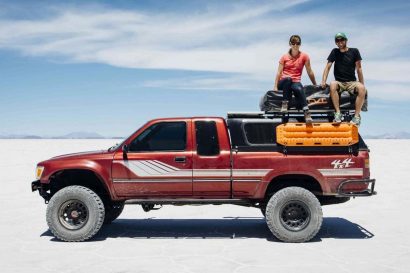 2016 Overlanders of the Year: Richard and Ashley of Desk to Glory 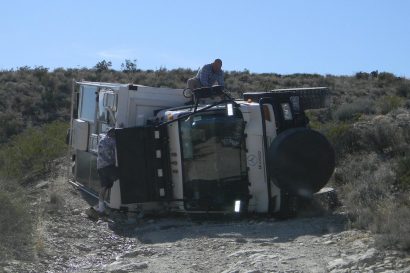 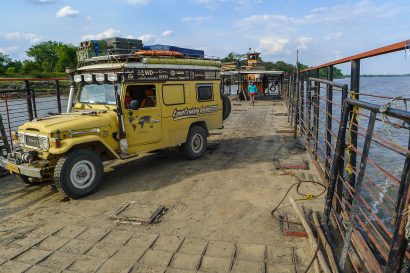