When Yakima first announced the release of their roof top tent last year, three attributes from the press release immediately caught my attention. The 95-pound weight for the smallest of two sizes made it one of the lightest roof top tents on the market, and because Yakima has spent several decades perfecting all manner of roof racks and accessories, it utilized an innovative quick-release mounting system. Best of all, in a market rife with expensive offerings, it was promised with an approachable entry price of just $1,000.

I was also relieved to see Yakima had the good sense to understand their prospective buyer as roof top tents have become popular acquisitions for travelers well outside of the traditional overlanding audience. Not everyone needs a tent for a yearlong traverse of Africa, but rather a convenient solution for weekend getaways. As such, their new SkyRise is light, compact, easy to install and remove, and works as well on a Subaru CrossTrek as it does a Land Rover Defender.

To achieve the weight and price objectives, Yakima’s designers opted to make their tent with a carefully chosen selection of lightweight materials. Instead of the heavy synthetic canvas used by many manufacturers, the SkyRise is constructed of 210-denier ripstop nylon. The rest of the structure is fabricated from light but sturdy aluminum components with a proven architecture that has been around for more than a half century. There’s no sense reinventing the wheel, right? 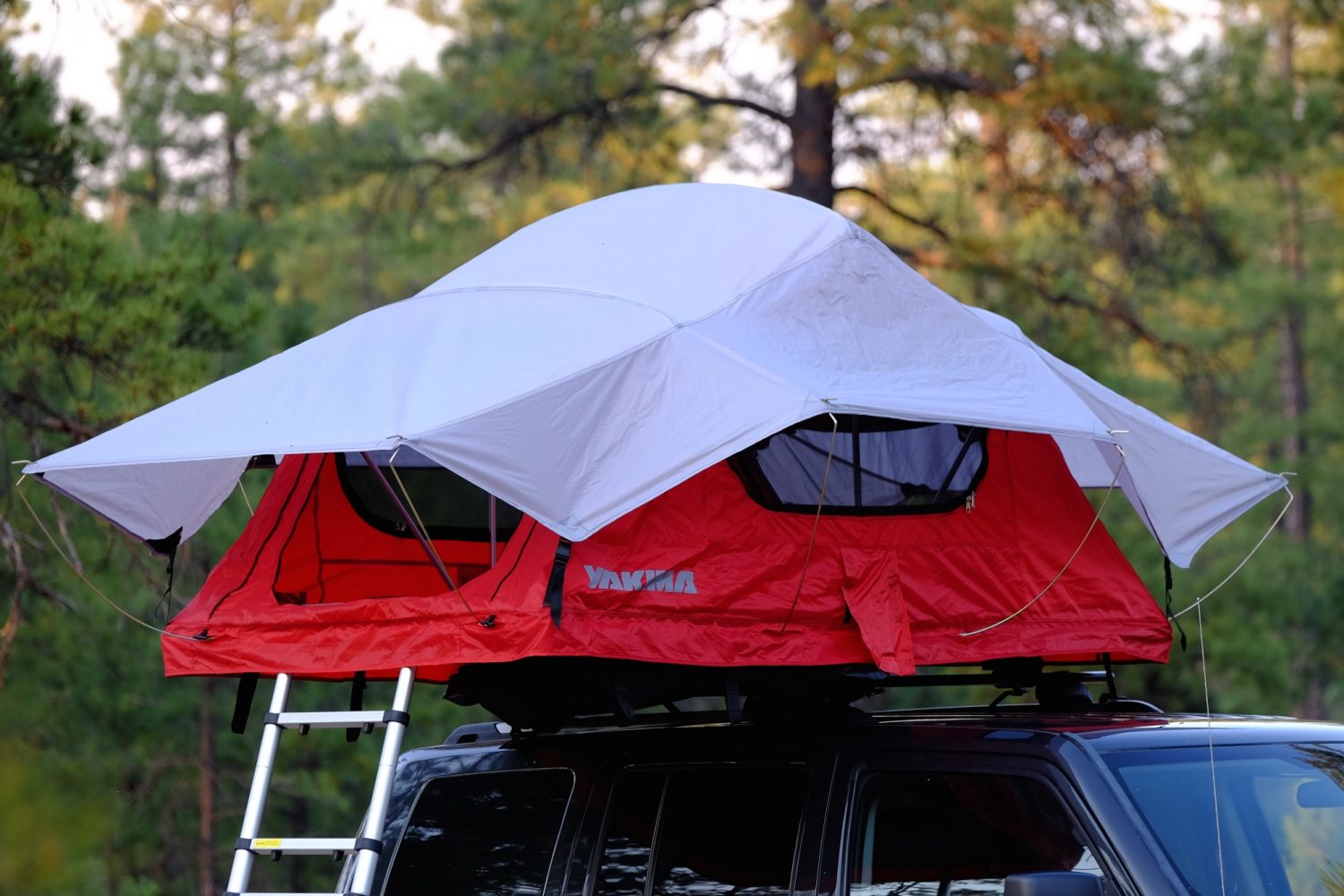 In the last few years I have tested more than a dozen different roof top tents, the unboxing and setup contributing heavily to my initial impressions. Whereas many tents arrive ready to hit the road, while others demand extensive preparation, Yakima’s tent requires modest assembly as a means of reducing the shipping dimensions. On the upshot, the kit includes everything necessary to get it roof-ready including tools and detailed instructions.

The bulk of the assembly involves attaching the four mounting brackets to pre-drilled holes in the base panel. I was pleased to see Yakima made accommodations to allow the mounting of the tent to open off the side or rear of the vehicle. The final step involves attaching the ladder, cover, and then clamping the SkyRise to any of a number of compatible crossbars. In my case I perched the SkyRise atop a burly Yakima CoreBar rack system.

With the tent loosely resting atop my car, the unique clamp mechanisms permitted the ability to adjust the final position in side-to-side and fore-aft directions. For those of us with rear lift gates, the ability to place the tent far enough forward to clear the gate while still centered over the crossbars is critical but easily achieved. Once the tent was located as desired, a few twists of the tensioning knobs had the SkyRise fixed in place, and two Yakima SKS locks ensure it stays put. From box to roof, the entire process took less than 30 minutes, although it did require a second set of hands to lift the unit onto my vehicle.

Given its standard folding format, setup of the SkyRise isn’t much different from other products in the category. It involves removal of the cover, unfolding the base, securing the ladder in the appropriate position, then attaching the eight steel support stays to the nylon rainfly. For use in warmer, drier conditions the rainfly can be omitted for maximum air pass-through. Although nowhere near as quick to pitch as a hard shell roof top tent, most soloists can be tucked in bed in as little as 7-10 minutes—with practice. Takedown requires a bit more time, much of that spent fiddling with the reattachment of the cover. 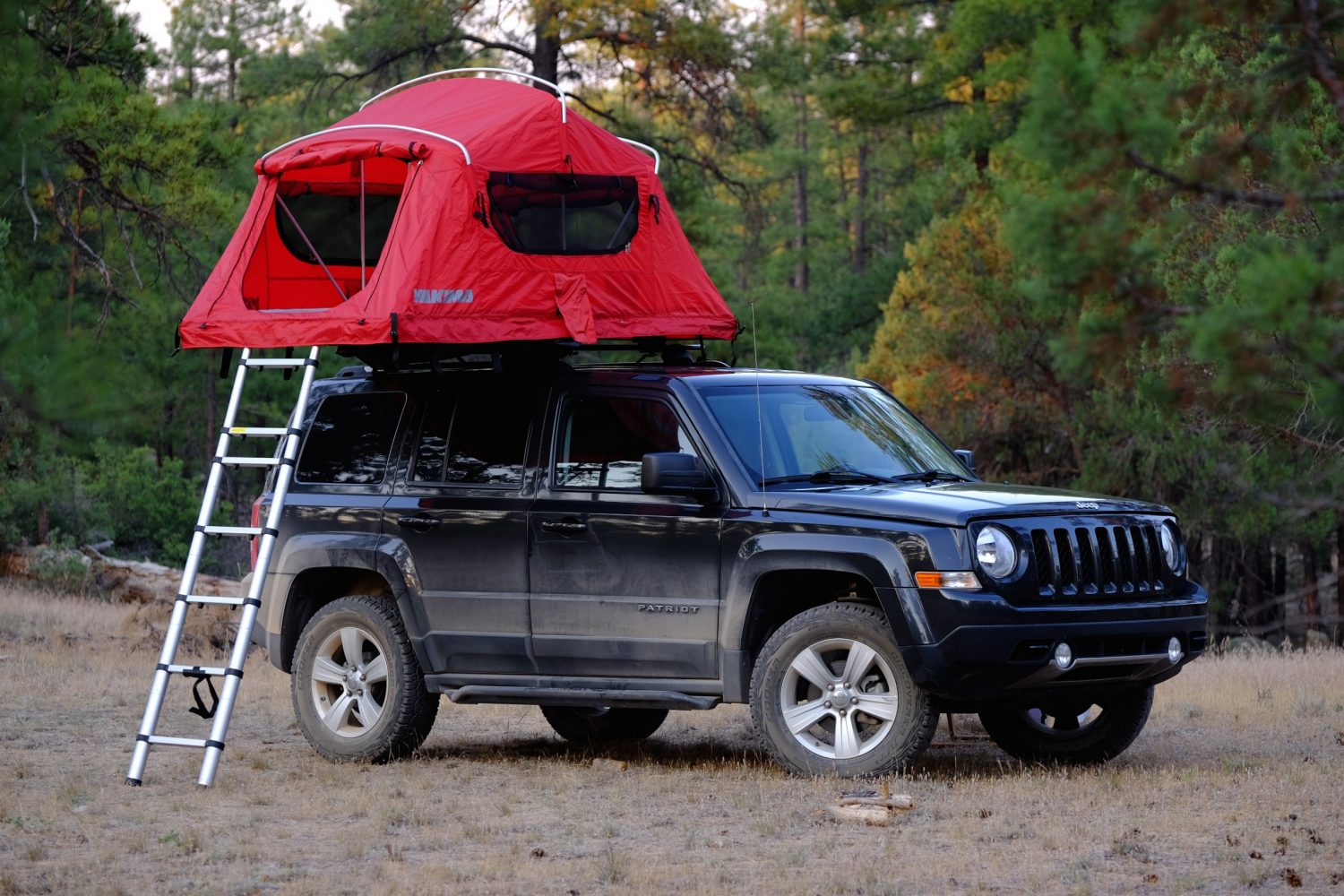 For use without the rainfly, the three upper aluminum support bars can be removed for a cleaner exterior. I leave them on when clouds are present as it speeds up the attachment of the rainfly. Better safe than sorry.

For Yakima’s first ever foray into sleep shelters, the final product demonstrates the designer’s familiarity with overlanding and roof top tents in general. Traditional elements were retained like the use of a thick foam mattress and mesh-backed windows and doors on all four sides. The rainfly includes large eaves to protect the door and windows without stifling ventilation, and internal pockets keep essentials close at hand. Adding to the livability of the interior is a large mesh-backed opening on the roof panel with a clear plastic skylight in the rainfly. Whereas many tents are gloomy places to dwell, the SkyRise feels bright, airy, and plush. If I have a nitpick, it is the use of red fabric. I understand it’s Yakima’s signature color, but I would have preferred a more calming tone, particularly when the morning’s first rays of sunlight hit the tent walls. 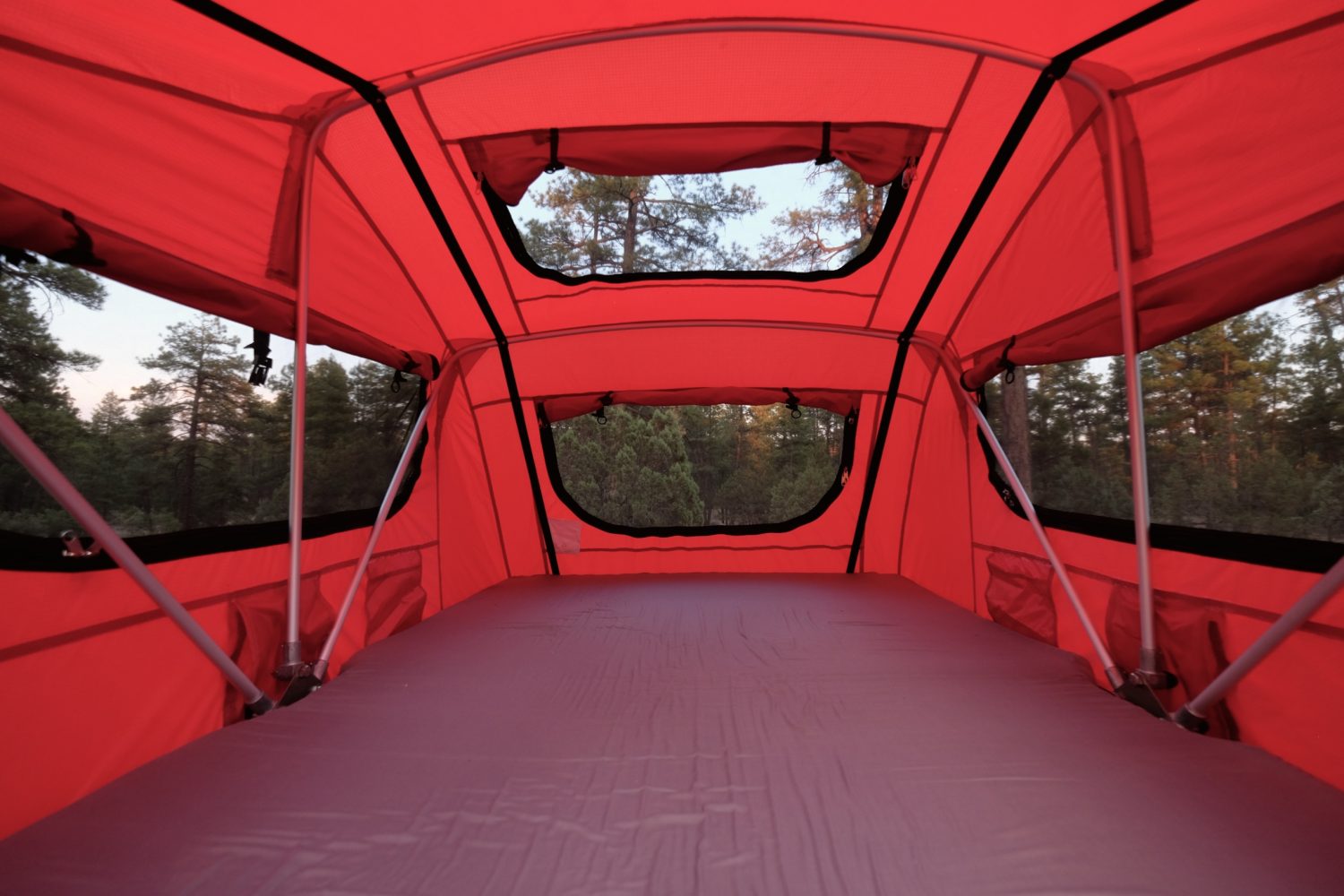 Notes from the field

Over the years I’ve come to appreciate the many nuances of roof top tents and what prospective buyers hope to glean from a product review. How good a tent is requires a detailed evaluation of the individual components and how they fit into the whole.

Mattress – At 2.5 inches, the mattress is sufficiently thick, but might be a tad on the soft side for some sleepers. After long nights my hip bones feel a little sore, indicating I’m likely depressing the foam too far. However, given the low MSRP of the SkyRise I wouldn’t expect a more expensive mattress. 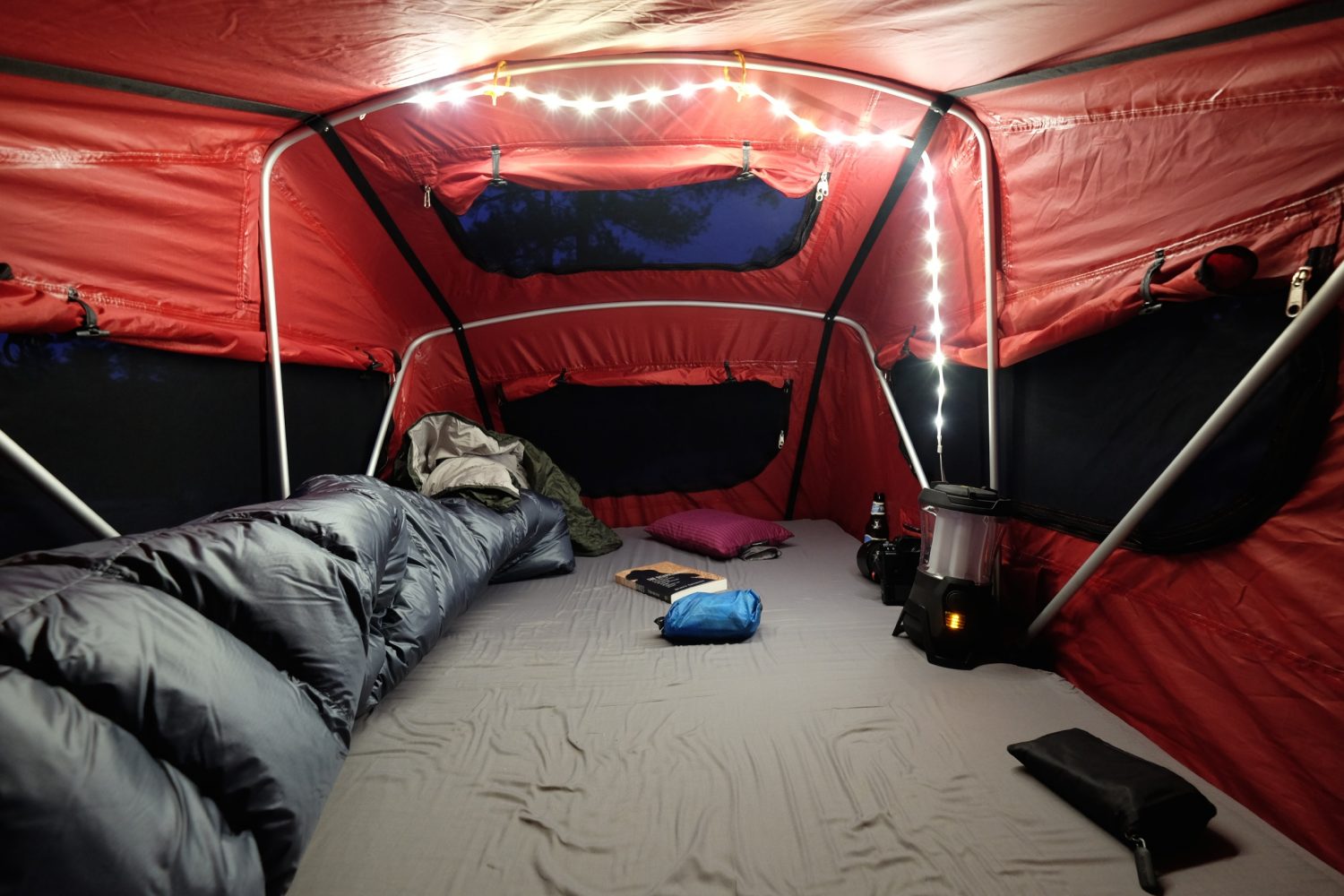 The SkyRise makes for palatial camping for one, but still spacious for two.

Ladder – This is the same ladder used on a number of roof top tents across the industry. Easy to deploy with secure locking mechanisms, collapsing the individual sections is a bit awkward due to the small lock releases on each rung, but it works well. On the plus side, the rungs are wide, reasonably comfortable on bare feet, and the overall structure is stout with no noticeable flex. 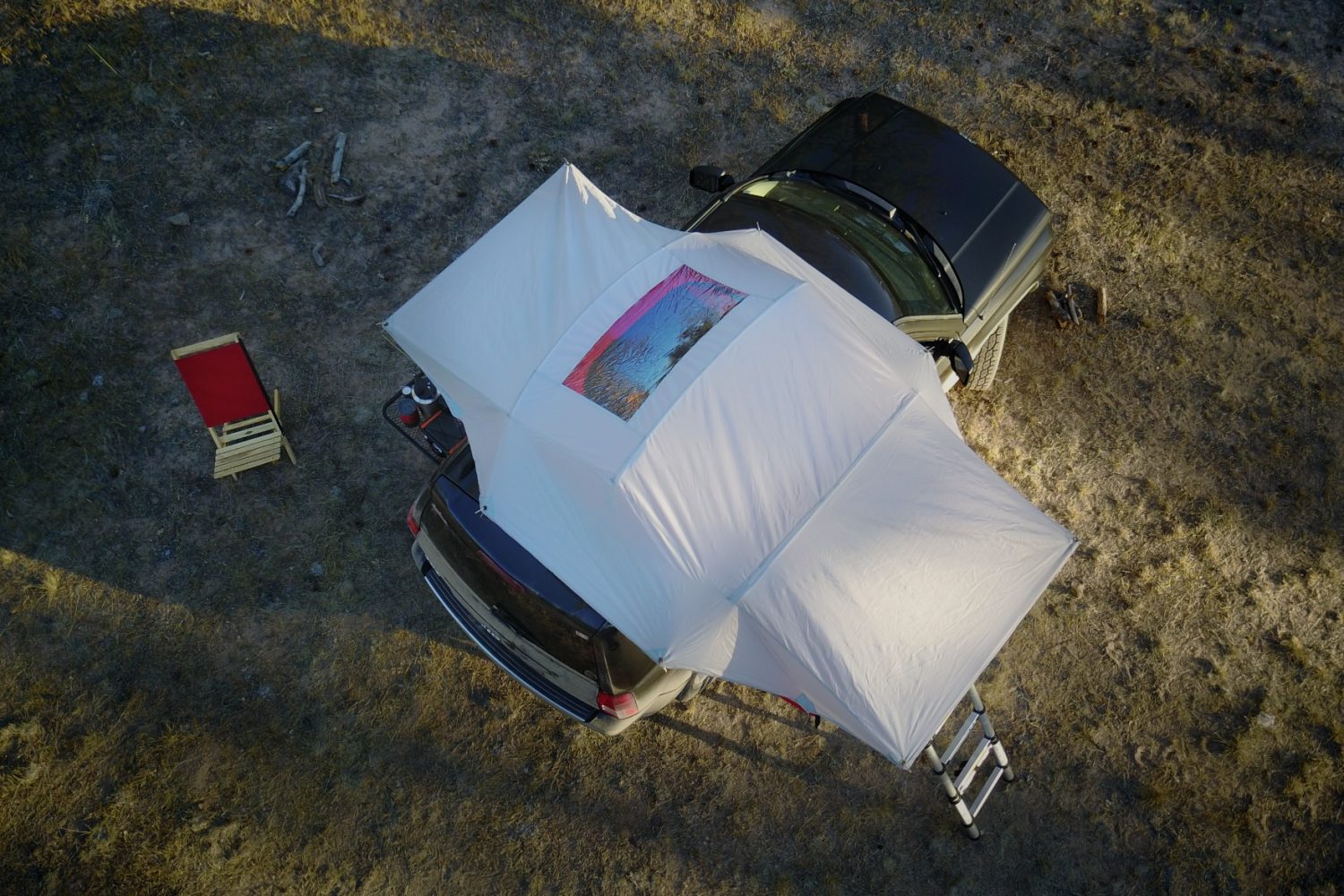 Sleeping platform – At 48 inches wide and 84 inches long, the sleeping platform is large enough for most sleepers, but tall guys might find the small SkyRise a touch tight. At 6’1″ I’m right at the maximum length without bumping into the walls more than I care to. With 28 square feet of sleeping space, it’s roughly the size of a small backpacking tent, which is more than ample for two normal-sized and well-acquainted humans.

Cover – Covers are a necessary evil for the traditional folding roof top tent and the Yakima cover has many of the same foibles all covers suffer. The zippers on the two far corners are easily mucked with dust, and should have been omitted or made of larger gauge tracks. I’ve taken to simply not using them and find I can still slip the cover over the tent. With six lateral webbing buckles and a full perimeter velcro enclosure, the cover is securely attached and does well to keep dirt out of the inner tent. I did seal the major seams as they leak otherwise when driving in a hard rain. 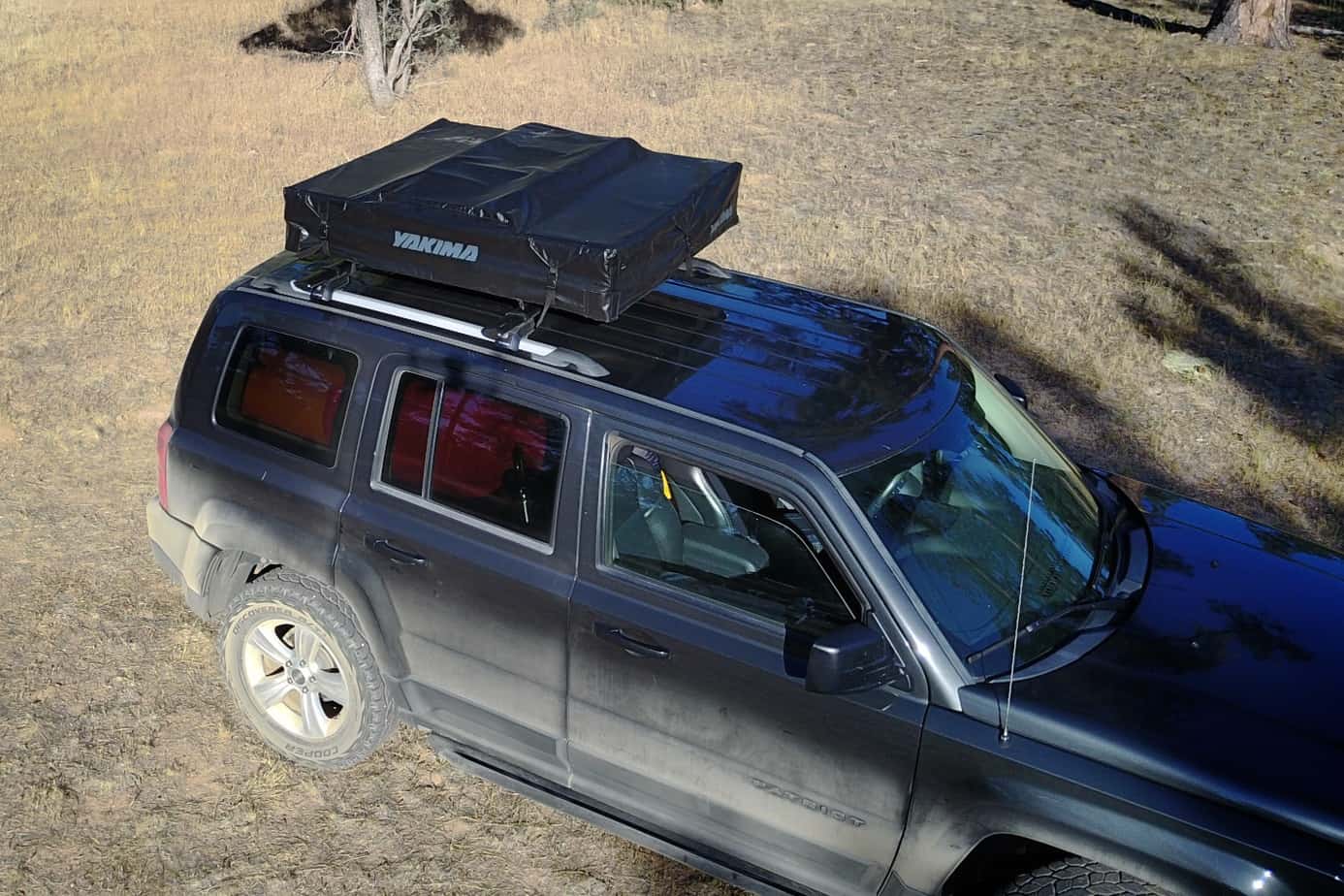 Mounts – I love the convenience of the mounting system as much as I loathe the bolt-on brackets used by all other tent manufacturers. I’m through losing knuckle skin to those systems and think all tents should employ Yakima’s quick-release clamps. The only drawback is the added height as it sticks up a touch higher than traditional mounting systems. That’s a compromise I’ll gladly accept for the convenience. I would recommend the SkyRise based on the mounts alone.

Rainfly – I have a couple of very minor quibbles with the rainfly. For starters, the steel stays used to support the fly were a little tricky to install on the first go. Two of the mounting holes had to be redrilled to accommodate the stays. I also had the opportunity to test the SkyRise in a windy blow and noticed considerable buffeting. I didn’t fear damage, even with gusts over 2o mph, but it would make for a rough night’s sleep in those conditions. I also have to report one very minor leak during my rain tests. Despite comprehensive taping of the seams, I found it necessary to seam seal at least one critical band of stitching along the clear window. In defense of Yakima, I have evaluated roof top tents valued at twice the price and noticed similar issues, if not far worse.

Tent canopy – Aside from my earlier comment about the color, I’m impressed by the large windows, door, and skylight, all critical to air-passthrough. I have not had many opportunities to use the SkyRise in temps below 40ºF, nor in wet environments, but those ventilation features will likely help reduce condensation. The 42-inch peak height also offers plenty of headroom, and the door aperture is large enough to permit an easy entry and exit although the opening is a little on the low side. 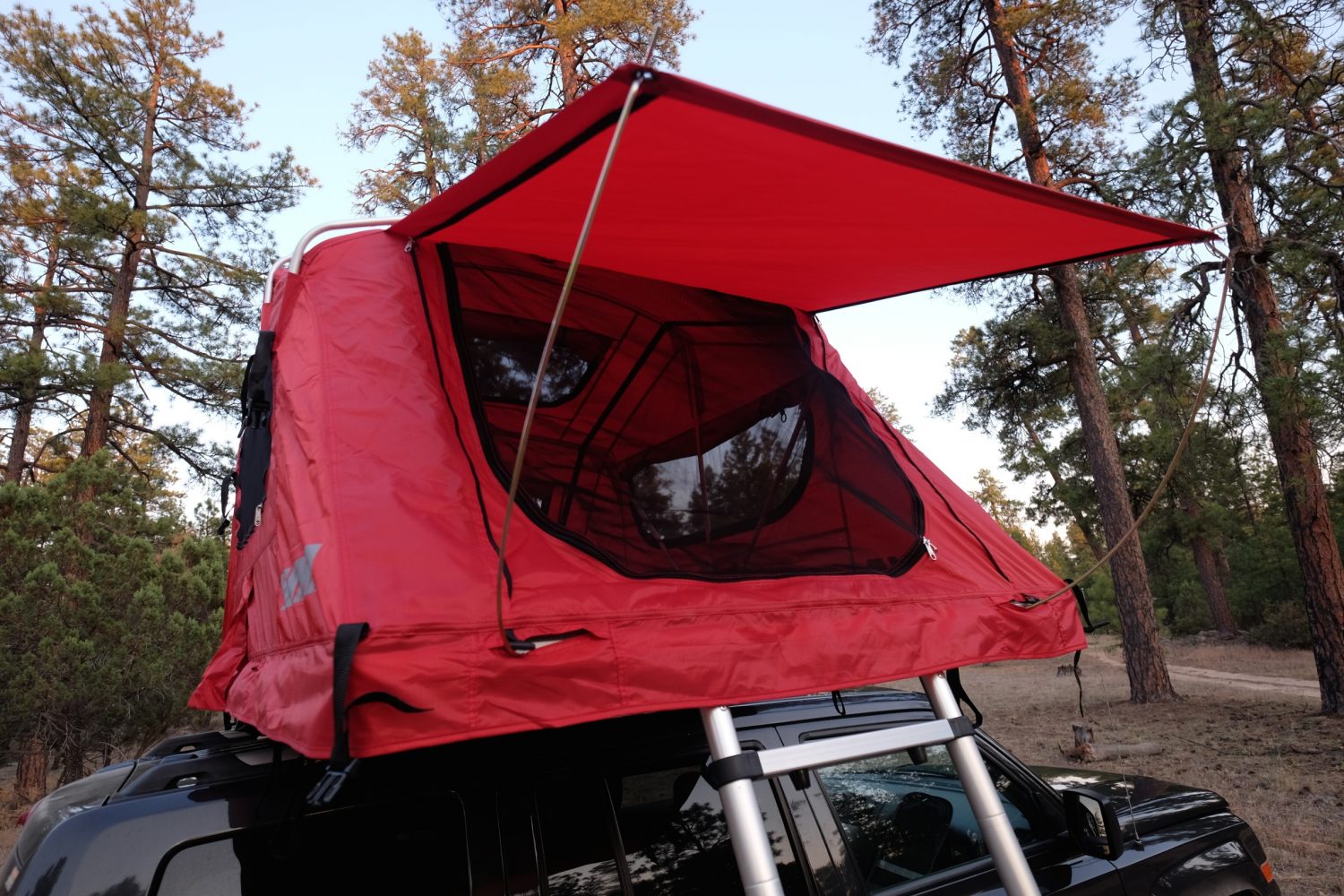 After several weeks with the SkyRise I have come to appreciate it for what it is. I have to frame my assessment within two primary considerations, and chief among them is the price. Whereas other tents sell for up to $3,000, the SkyRise represents a considerable value. Unfortunately, cost-trimming does rear its head in a few areas. Aside from the minor leaking issues I encountered, the inside of the tent was littered with metal shavings from the factory. A quick pass with a shop-vac was the obvious remedy, but anyone parting with $1,000 might be off-put before they ever spend a night in it.

During the initial assembly I did have to fidget with a few of the bolts, but everything slipped into place rather well. There were two uncompressed rivets on my test tent, but overall, I didn’t encounter any deal breaker issues. I recently evaluated a $3,500 tent with far worse manufacturing woes, so Yakima is not alone with regard to some of these minor missteps. And again, I have to continually remind myself, this is one of the least expensive roof top tents on the market. 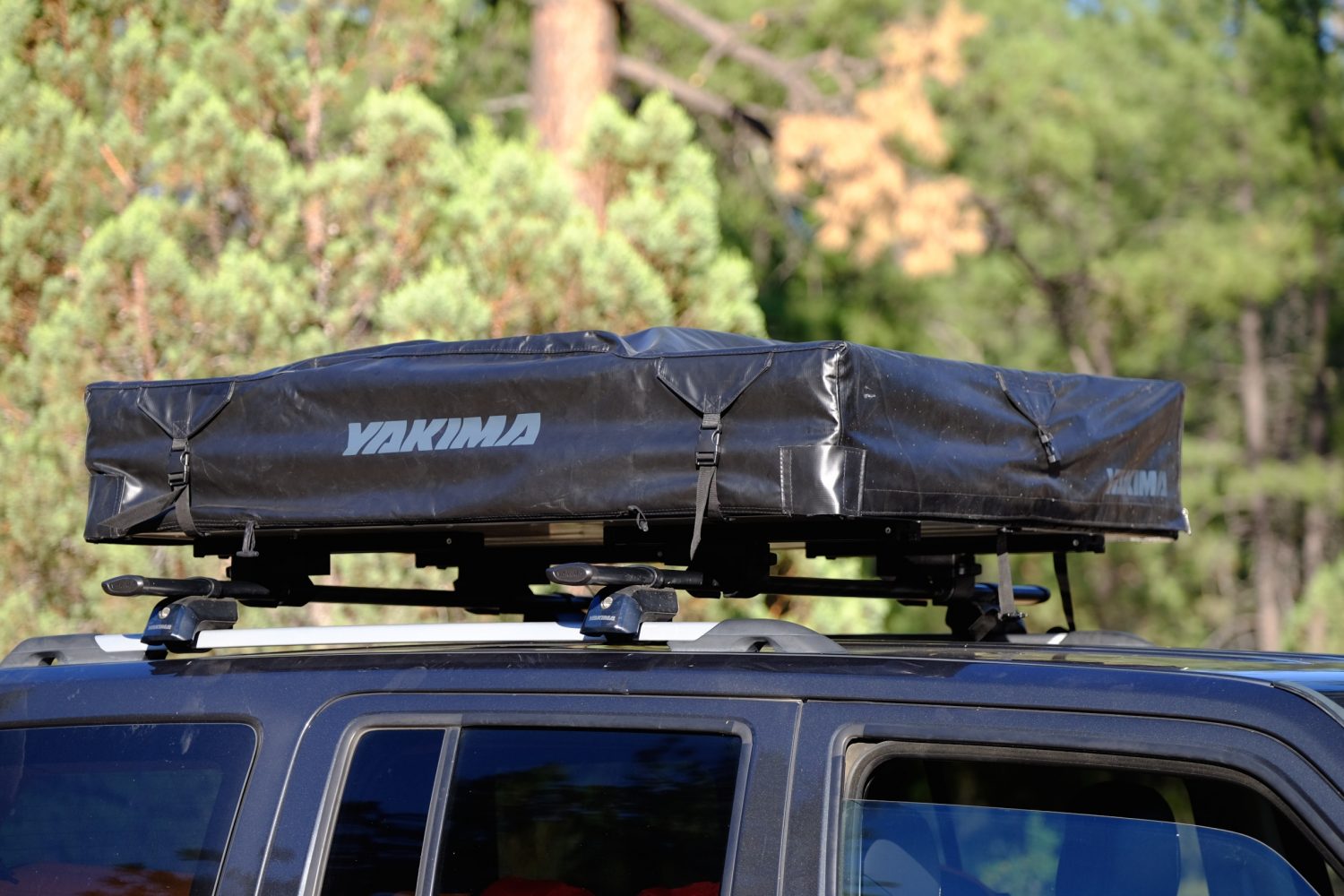 So far, I’m very pleased with the SkyRise and admit I probably represent the ideal buyer. I wanted something I could mount to a smaller vehicle, remove easily when not in use, and because I’m not living out of it for months on end, I don’t feel the need to part with $3,000 for an expedition-grade shelter. Keeping those factors in mind, I think Yakima’s first backcountry abode is going to be quickly adopted by a wide variety of adventure seekers. 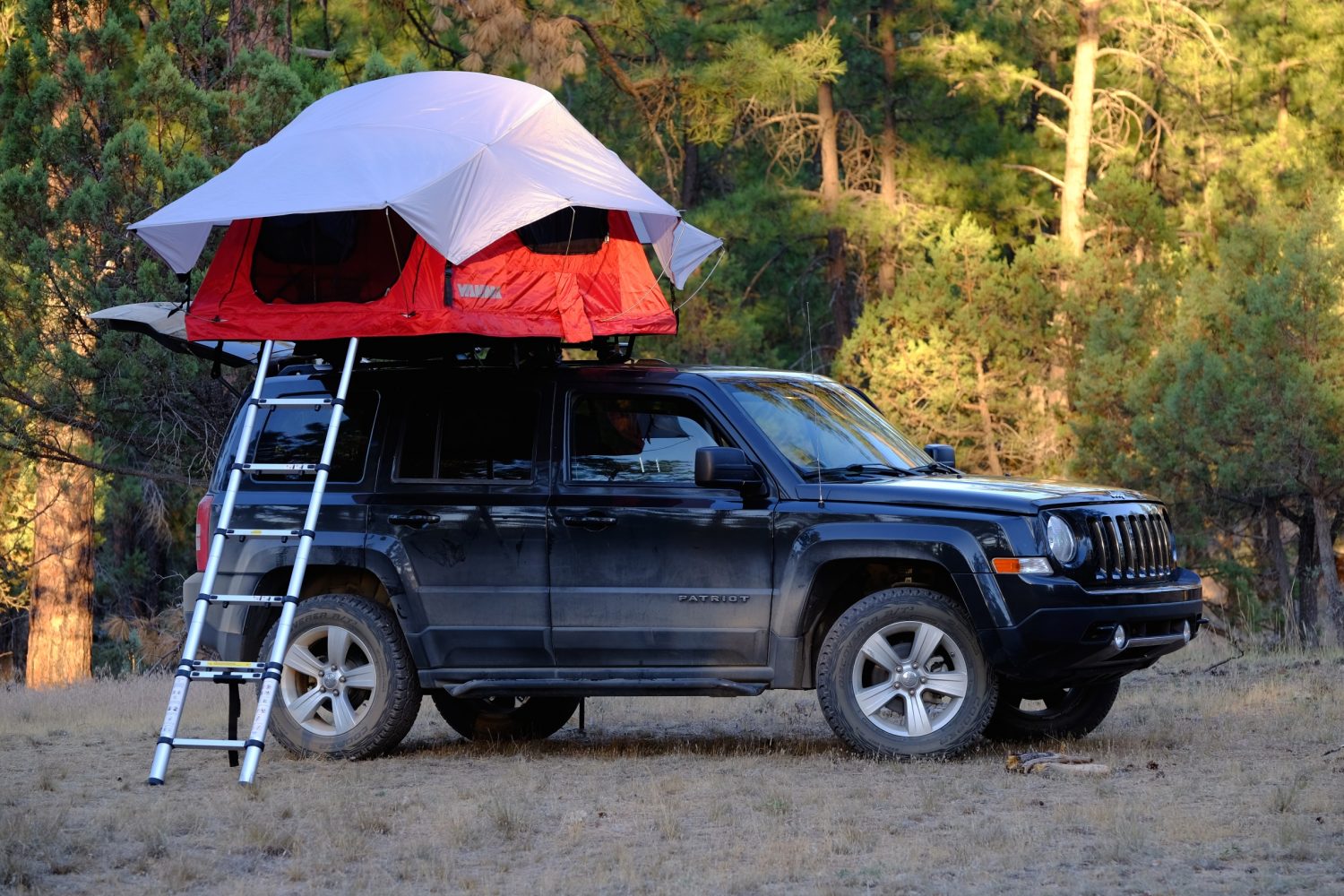