I think in order to understand where we are going, it is best to know where we have been. With that in mind, I want to start by addressing a question I’ve been getting a lot lately, “Why the switch?” For those of you that don’t know, I had a Flippac for quite a while before getting my GoFast Camper (GFC). The Flippac is a great platform, and arguably gives you the biggest living space of any truck bed camper on the market. It’s bigger than a Habitat or even Four Wheel Camper, so why would I give that up? Well, there are a few reasons, and number one was that I wanted something new that had customer support and available parts. Anyone with a Flippac knows that parts are nearly impossible to find besides torsion bars and hinges, and there’s a lot more that can go wrong with a Flippac than that. 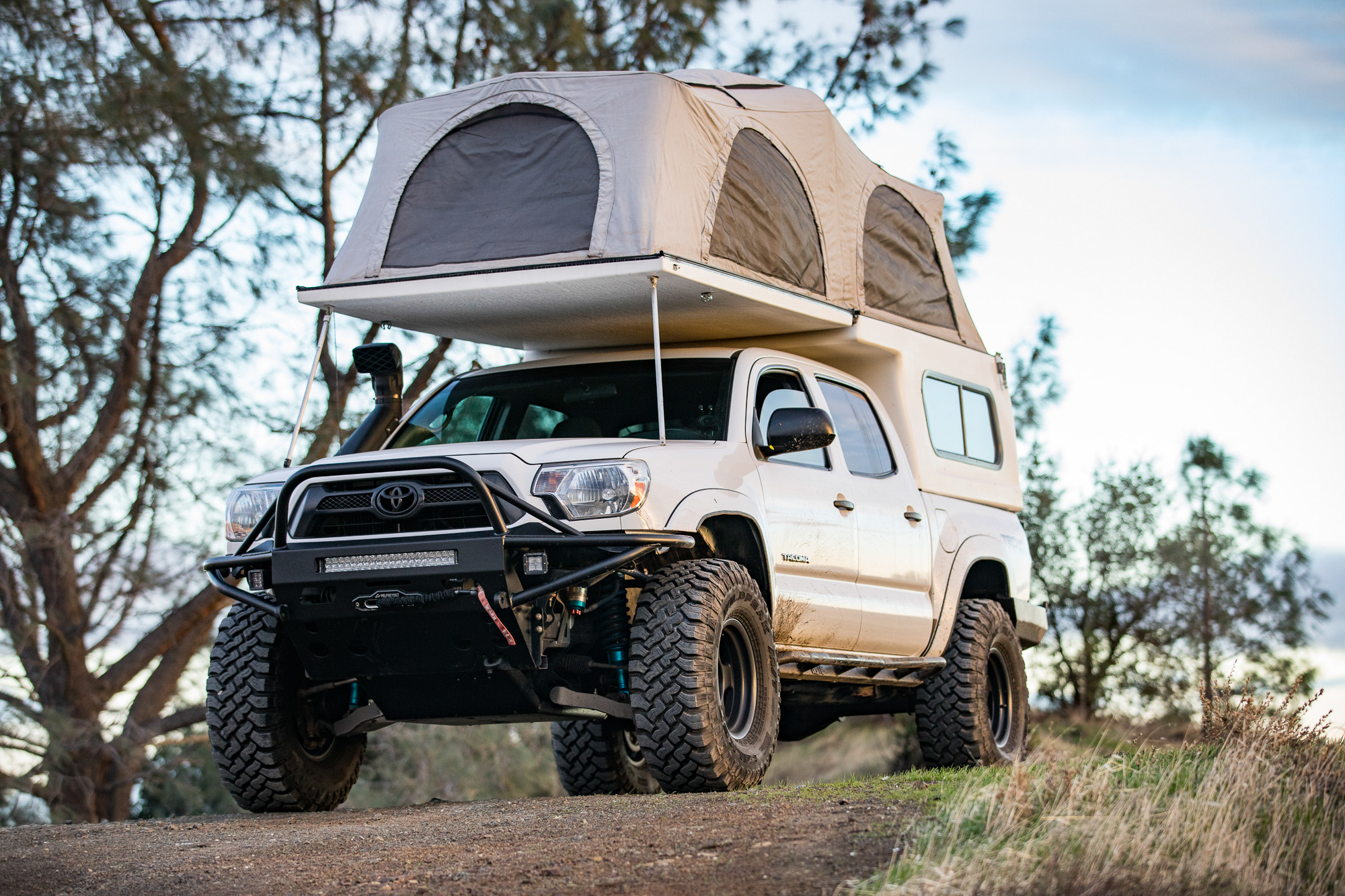 I also wanted something well built. The Flippac was a great product, but it had some major quality issues. I won’t go too into depth on this, but they had a steel frame on the inside of the fiberglass that if not properly sealed 100 percent of the time can rust and deteriorate, leading to major failures. Another big issue is that the tent is not even remotely weatherproof, so a light rain will lead to you being wet unless you install the rainfly which is a pain and even more annoying to put away wet.

So, in summary, I wanted something new, lighter, with parts availability, and a hard roof. The GFC had all of that, but what ended up selling me was the modularity of it. 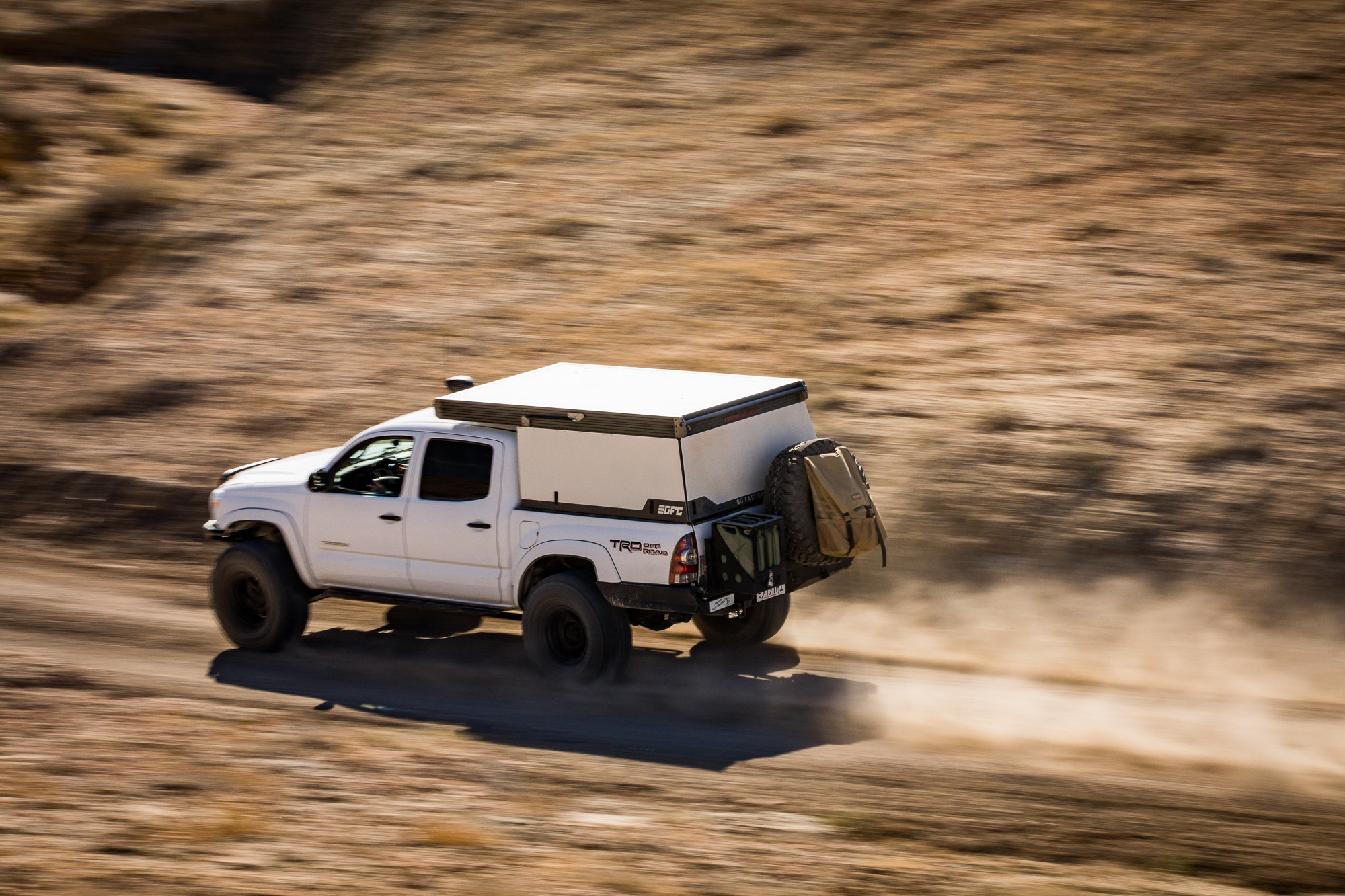 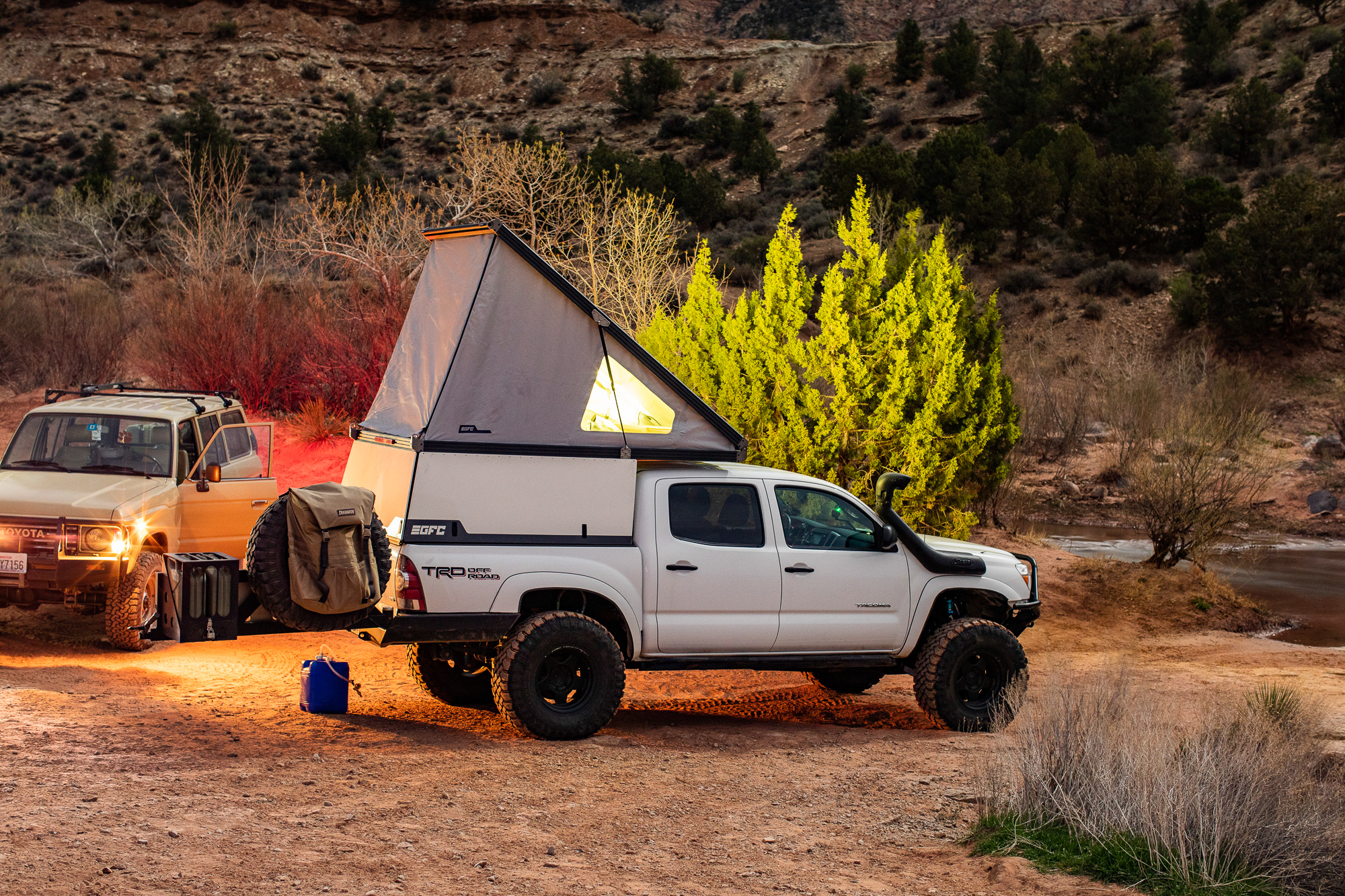 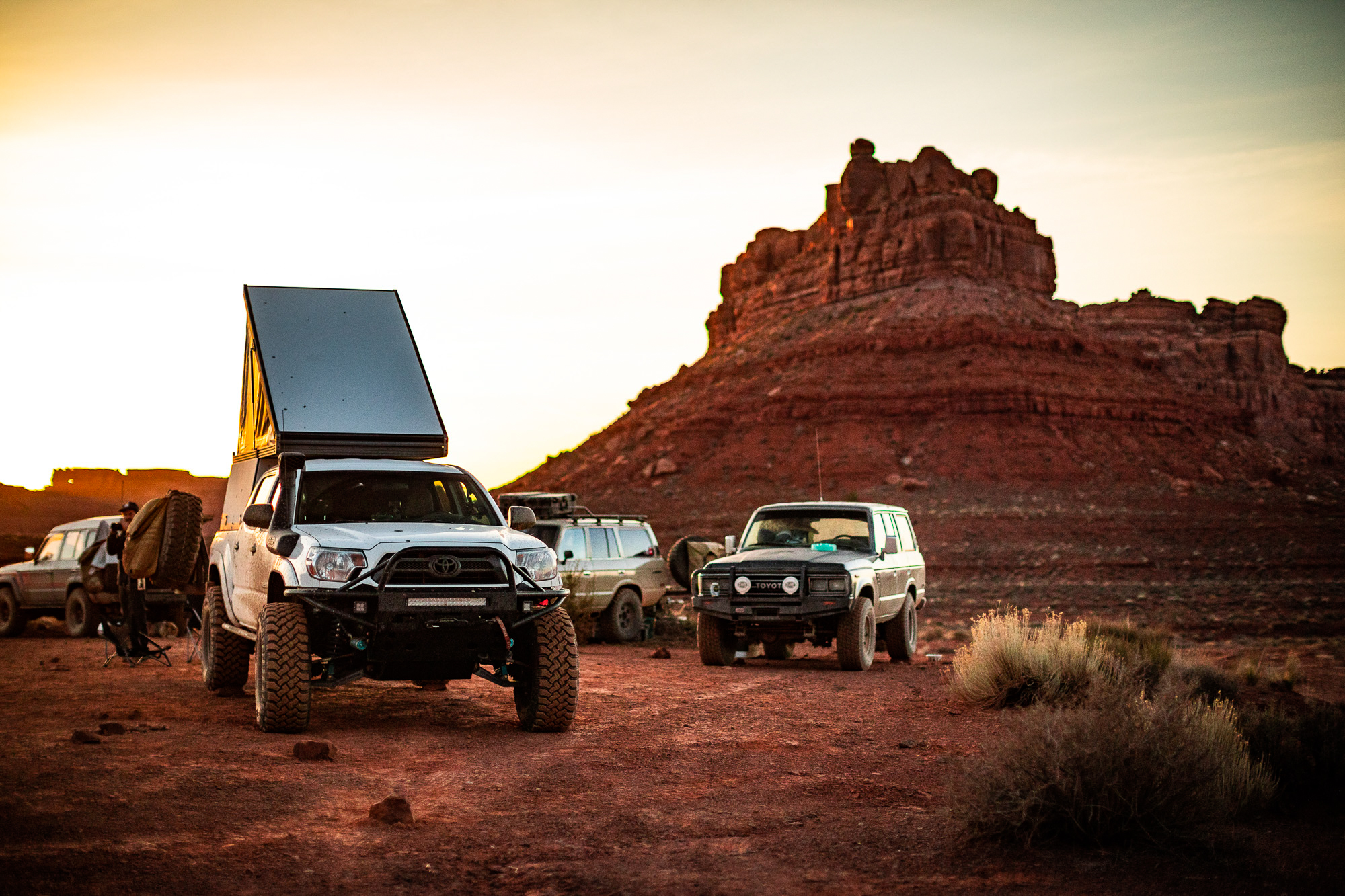 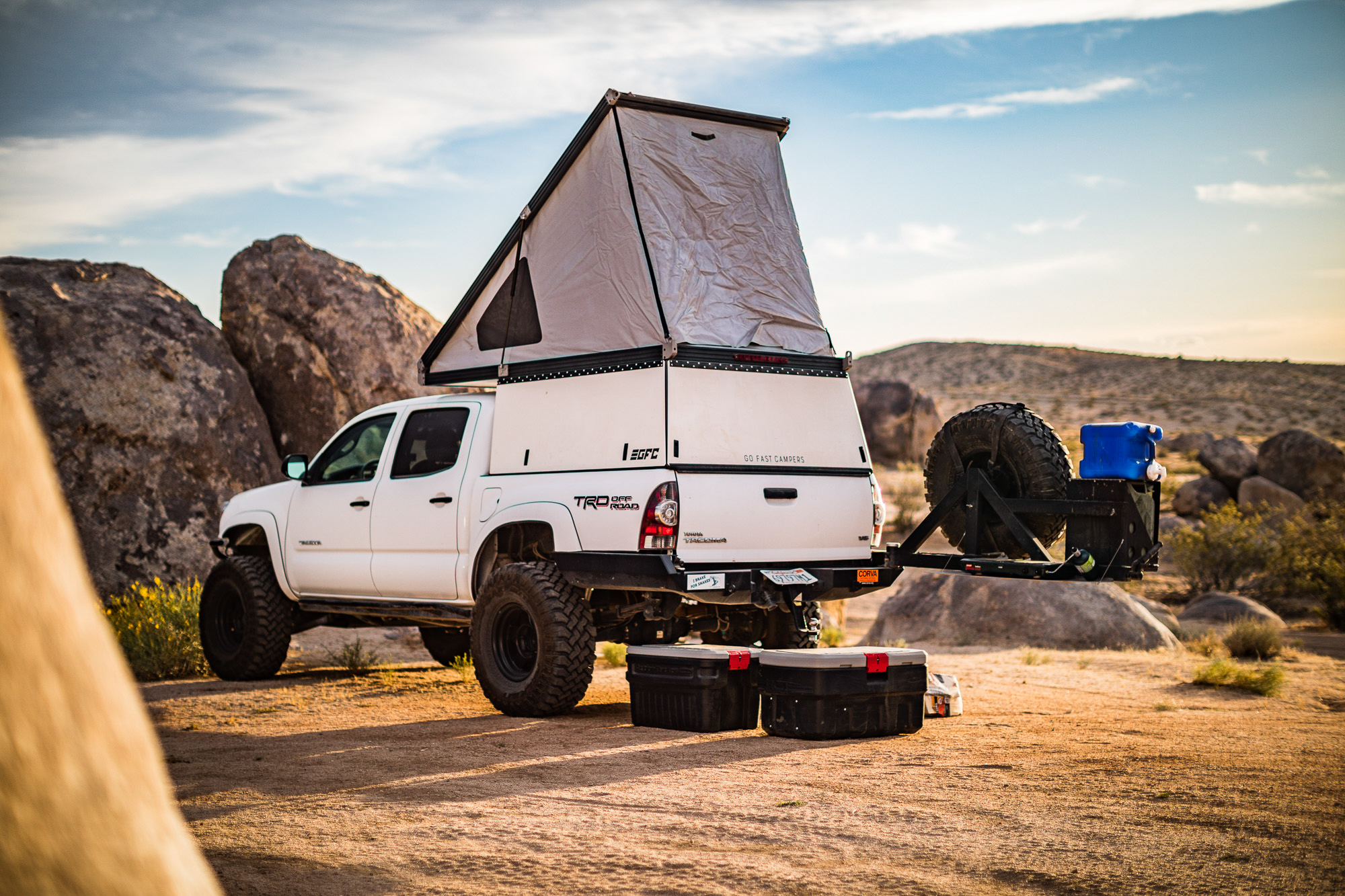 Being able to open it up from all sides is like having little awnings all around the camper, making it a great area to hang out in. Then there are the floor panels, which can be moved in several configurations for a myriad of situations. First, they give you different sleeping options; you can sleep with all of them in and move one to get down, you can leave them all in and use a ladder like a RTT, or you can leave one or two out and sleep in bunk mode. There really are a ton of options! My favorite way to sleep so far has been with one or two removed in bunk mode. I haven’t had any issues with bedding or pillows falling down like some people have asked me, and it gives me access to the camper and the ability to move around. When my girlfriend comes along, we sleep with all of the panels in and usually just leave the small square panels at the end of our own side so we can get up and move the panel without making the other person get up. If we don’t want to move those panels, I’ll just climb out onto my rear bumper from the big window.

In addition to just sleeping, we’re able to stand up and leave the panel in without the cushion to create a huge work table or even cook inside if the weather is poor. I’ve even set up an Action Packer with the panels on top of and behind it to create a bench seat, which works really well as a lounge. I believe they’ll be offering some sort of system to make an easy couch with this configuration soon. 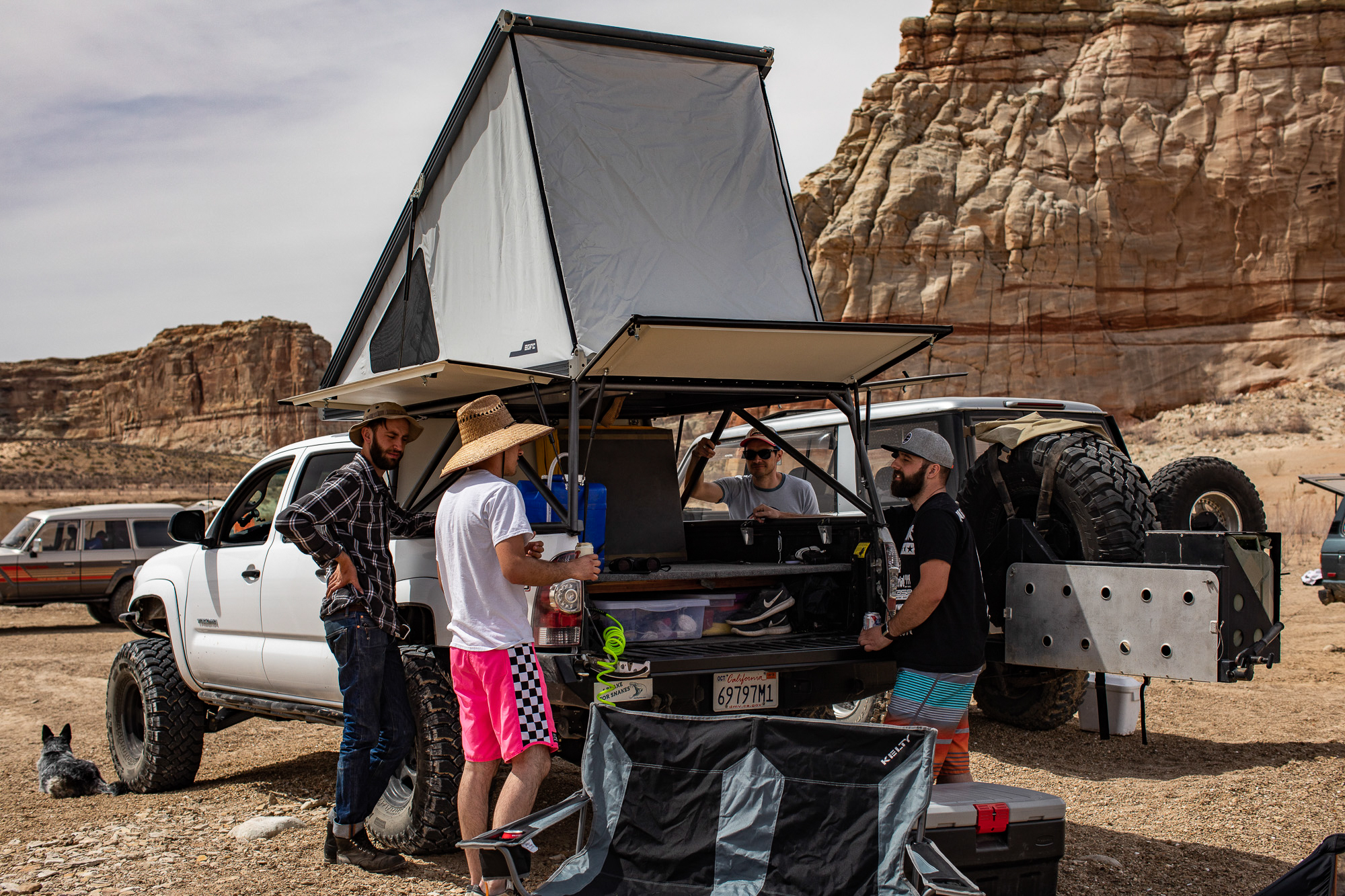 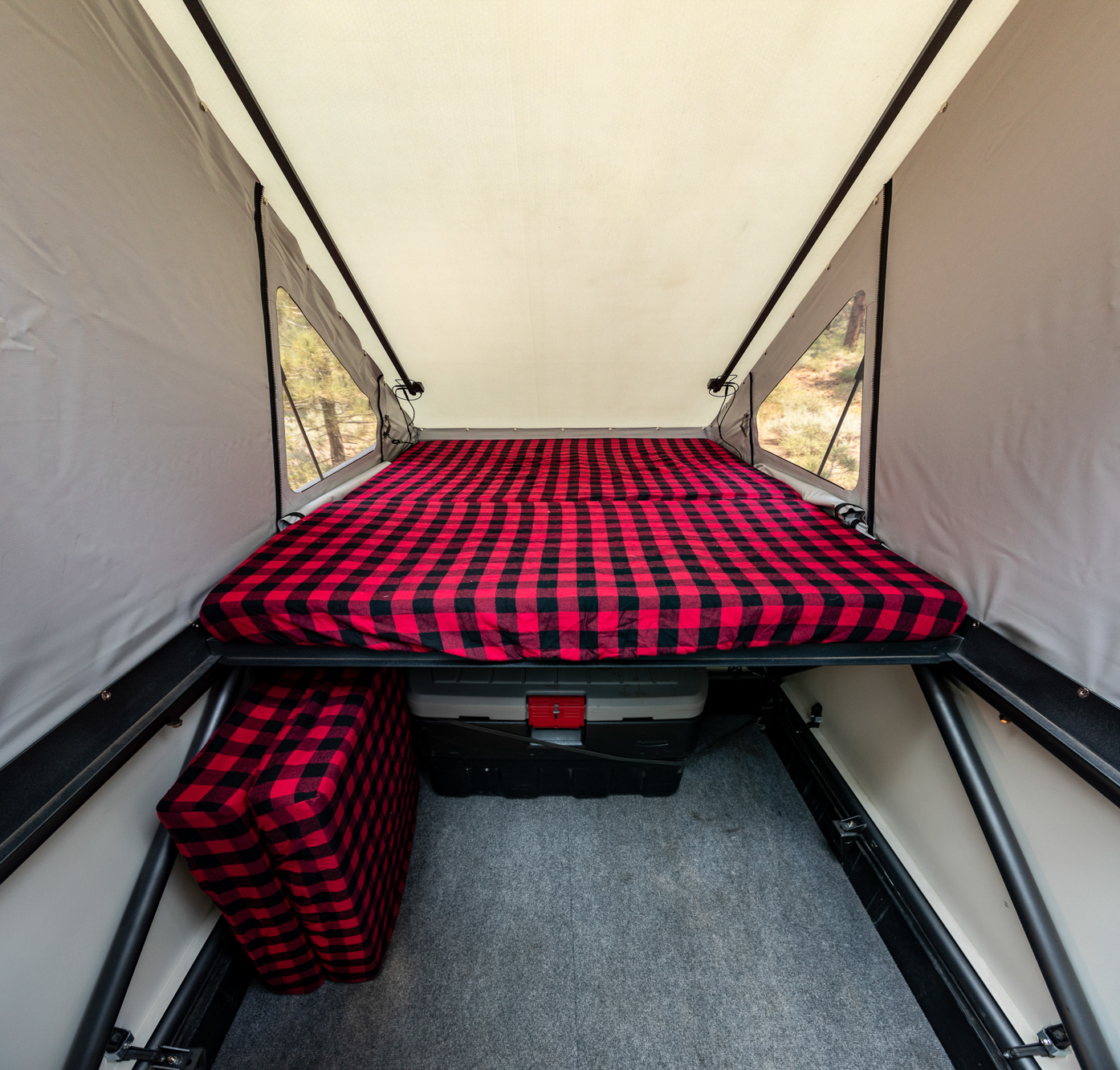 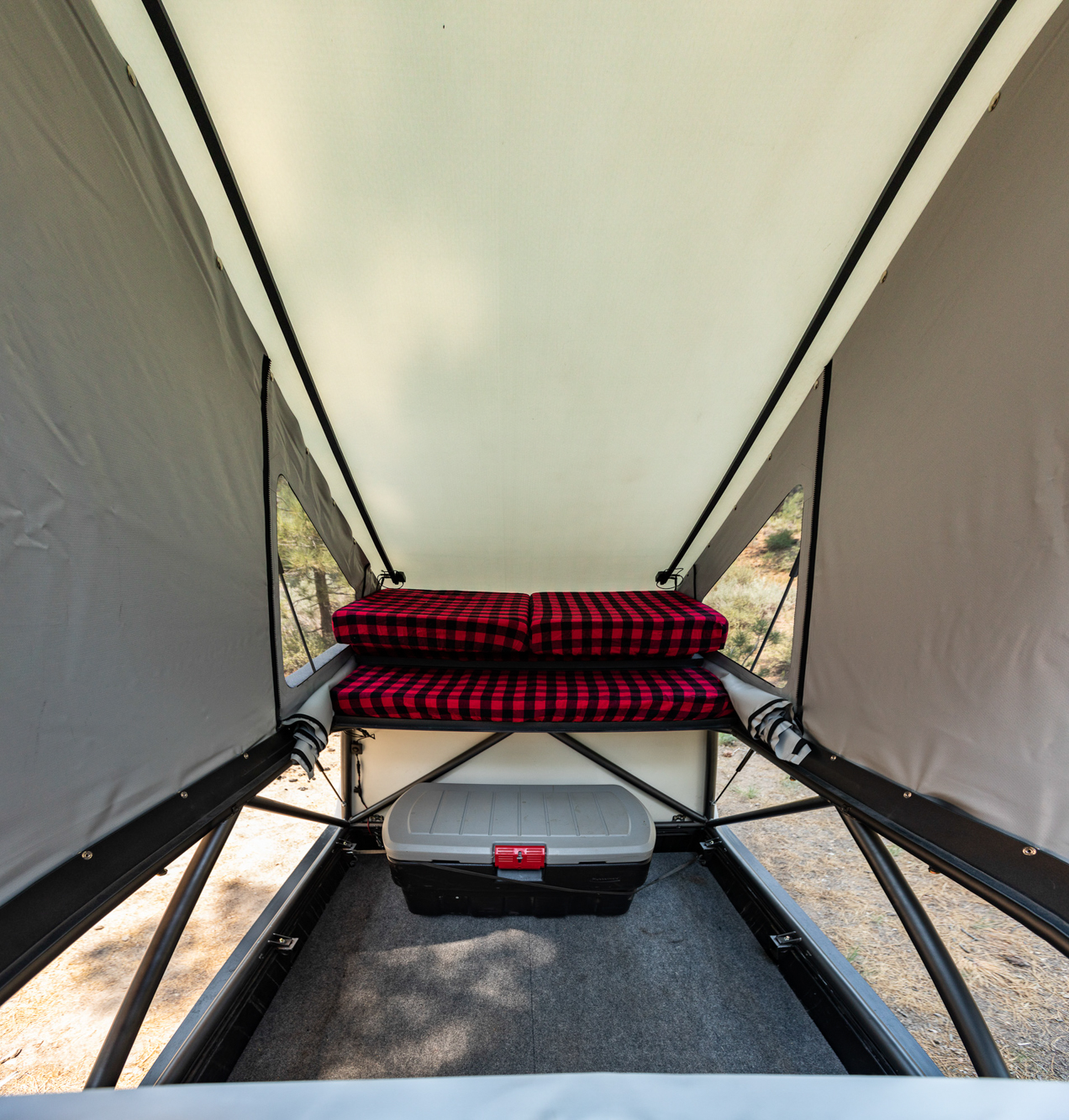 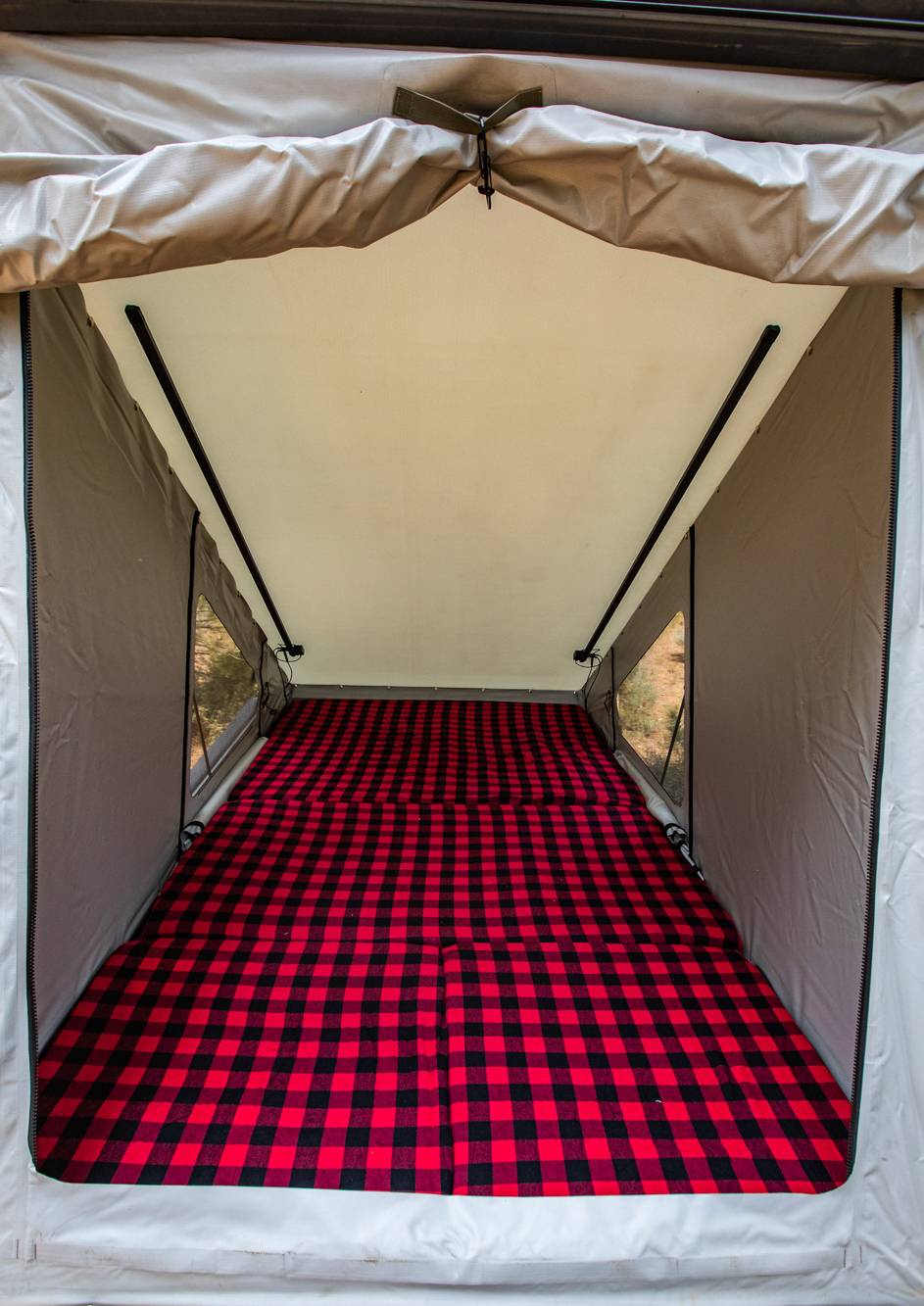 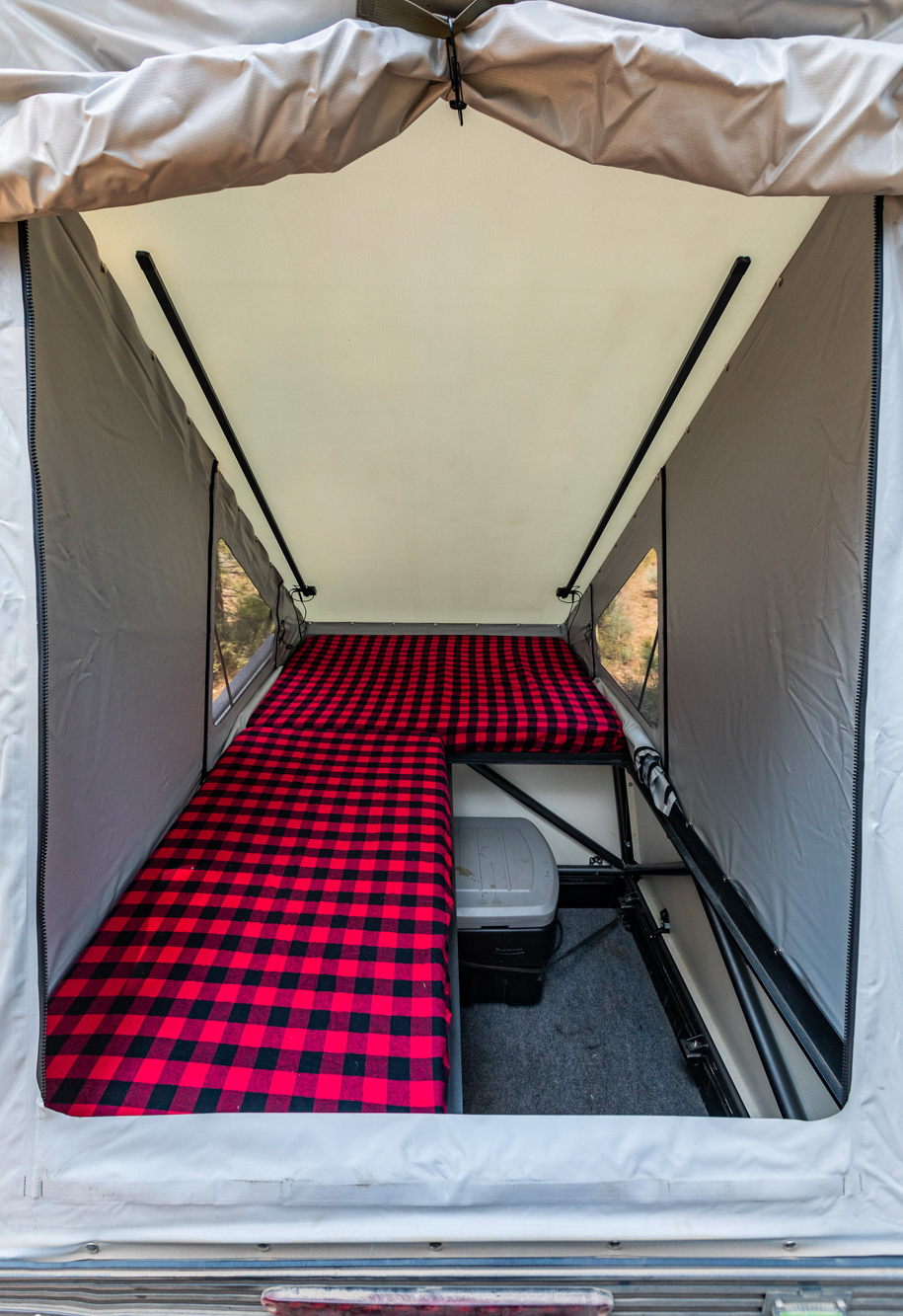 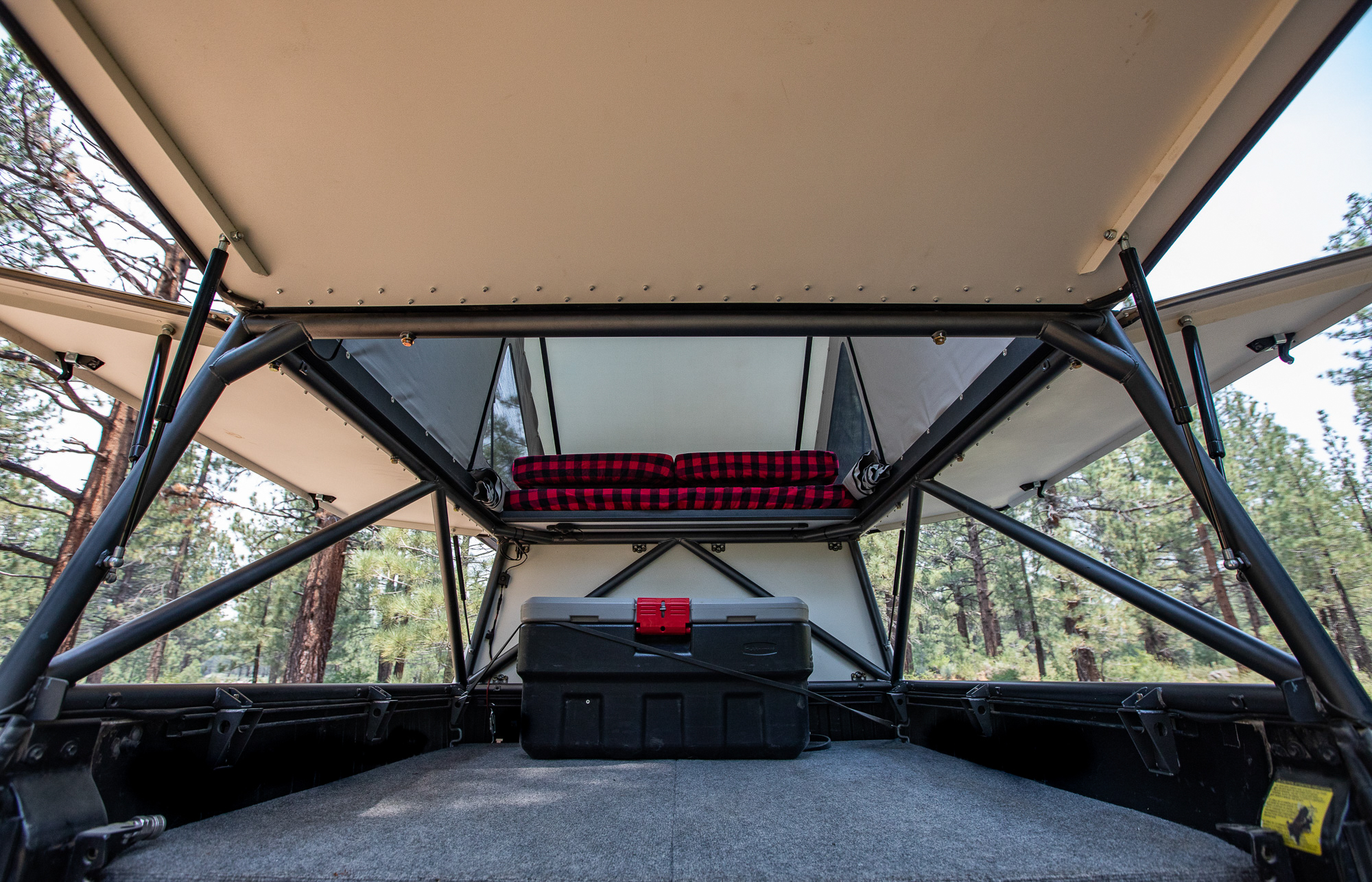 One thing I  was looking for when I started thinking about a new camper was the ability to handle the type of wheeling I like to do. I wanted something that was built for off-roading, not overlanding. I like wheeling, and I like camping, and I needed something that fit that lifestyle and my Total Chaos long travel. 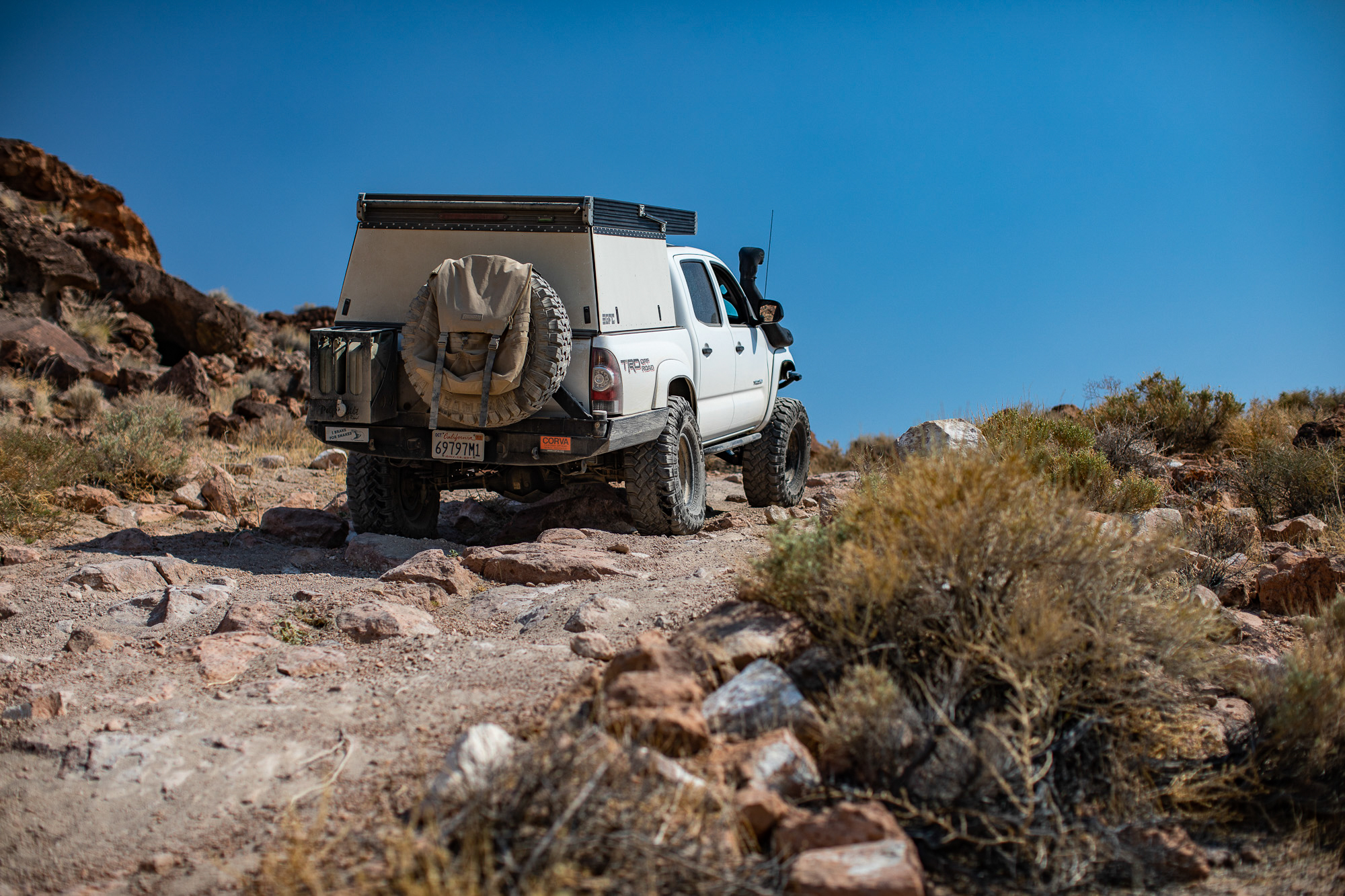 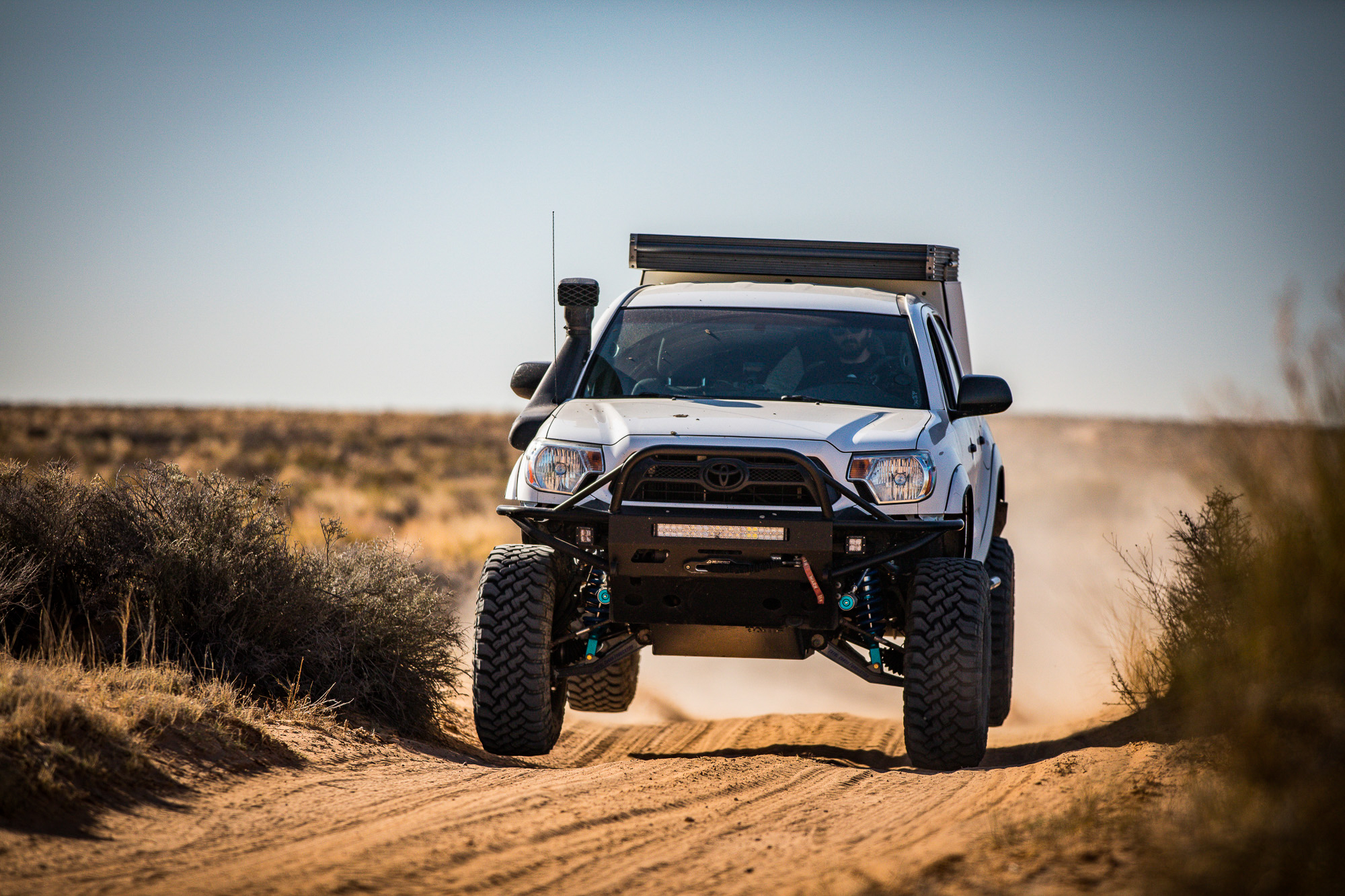 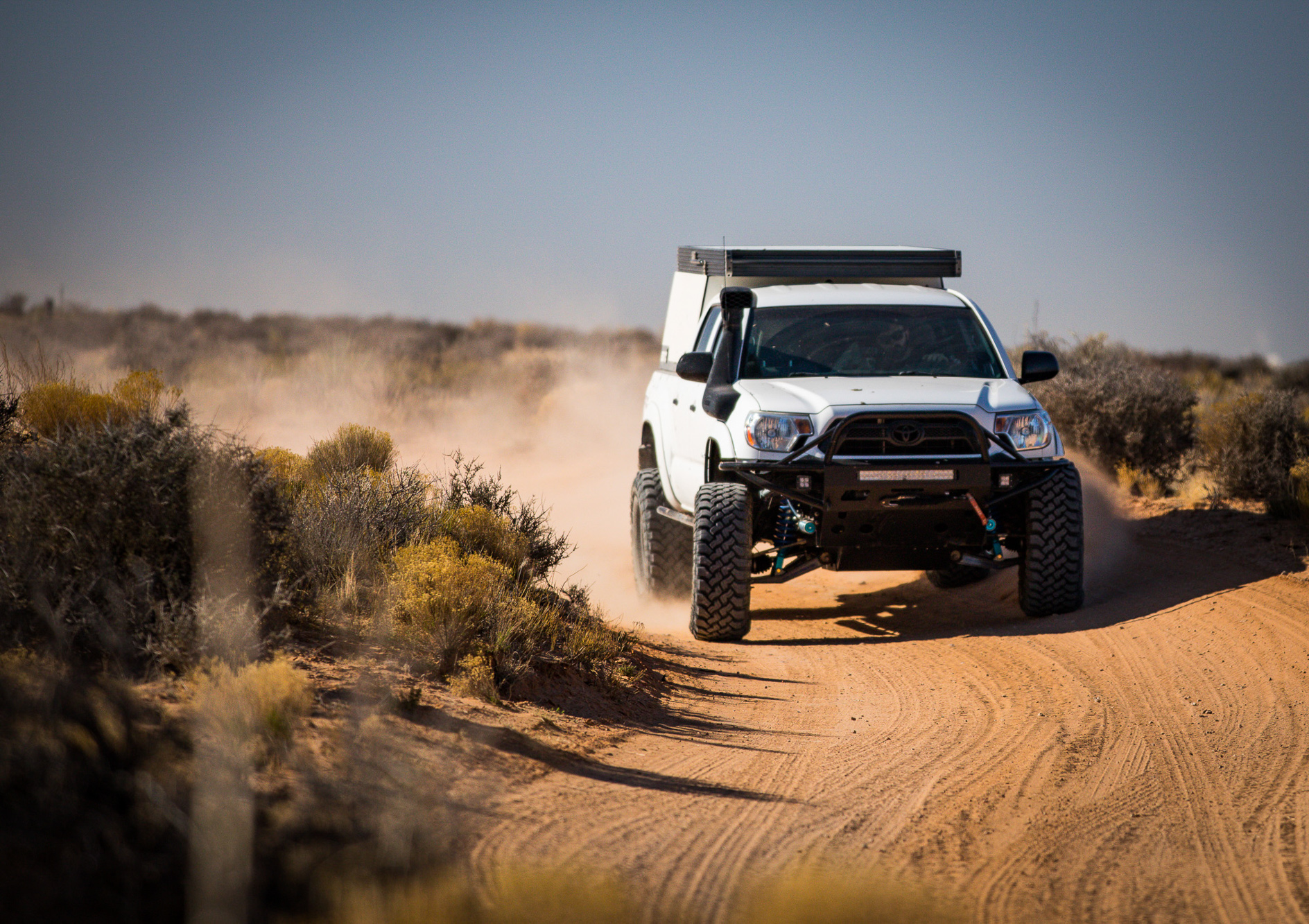 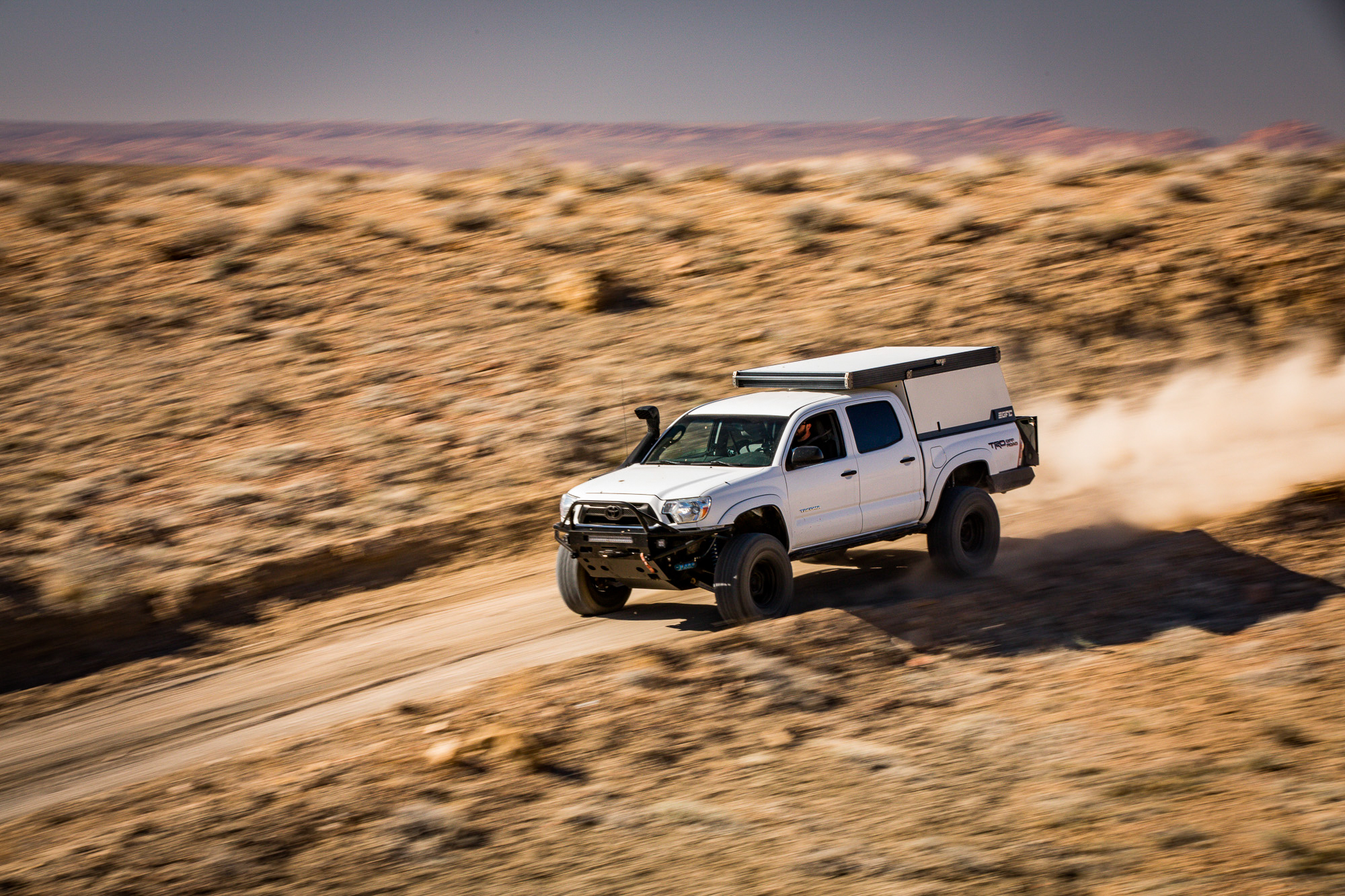 That’s one thing people don’t always seem to grasp with the GFC. I see comments such as, “I wish they made it longer so you could get out of bed and have room to move around.” That isn’t the point of this camper. I look at it as a hybrid camper/rooftop tent, and I don’t mean that in a bad way. I get all the advantages of a camper, and all the advantages of a rooftop tent because it is so modular. I can sit and work or cook inside if the weather is bad or I want away from bugs. Alternatively, I can sleep with all the panels in and simply move one or climb out the big window, or a mix of both! I believe there is a market for both styles of camping. Some people want something large and more “livable,” but there are also people who don’t need that much space, and want something that fits their driving and camping style. For me, and many others, that is something smaller and lighter. 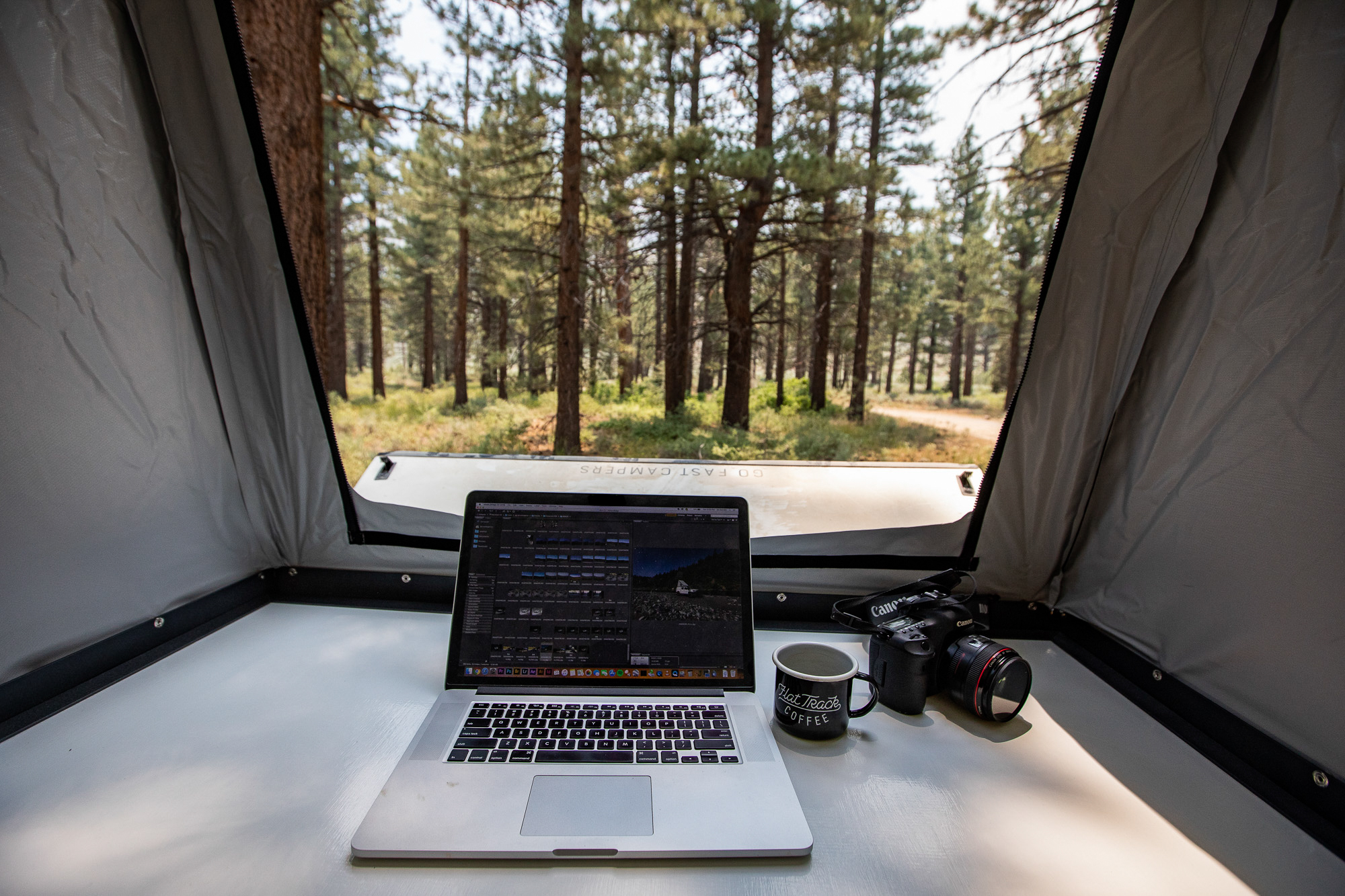 The panels seem to be a point of contention for some people, and I get it, but until you see the camper in person it’s hard to tell just how easy and fluid this is. My girlfriend and I have zero issues getting in or out in the middle of the night. It’s very easy. Basically, you just scoot your feet up, lift the panel, set it down and get out, so for us, this is not an issue, and it’s something I gladly deal with to keep the weight and size of the camper down. 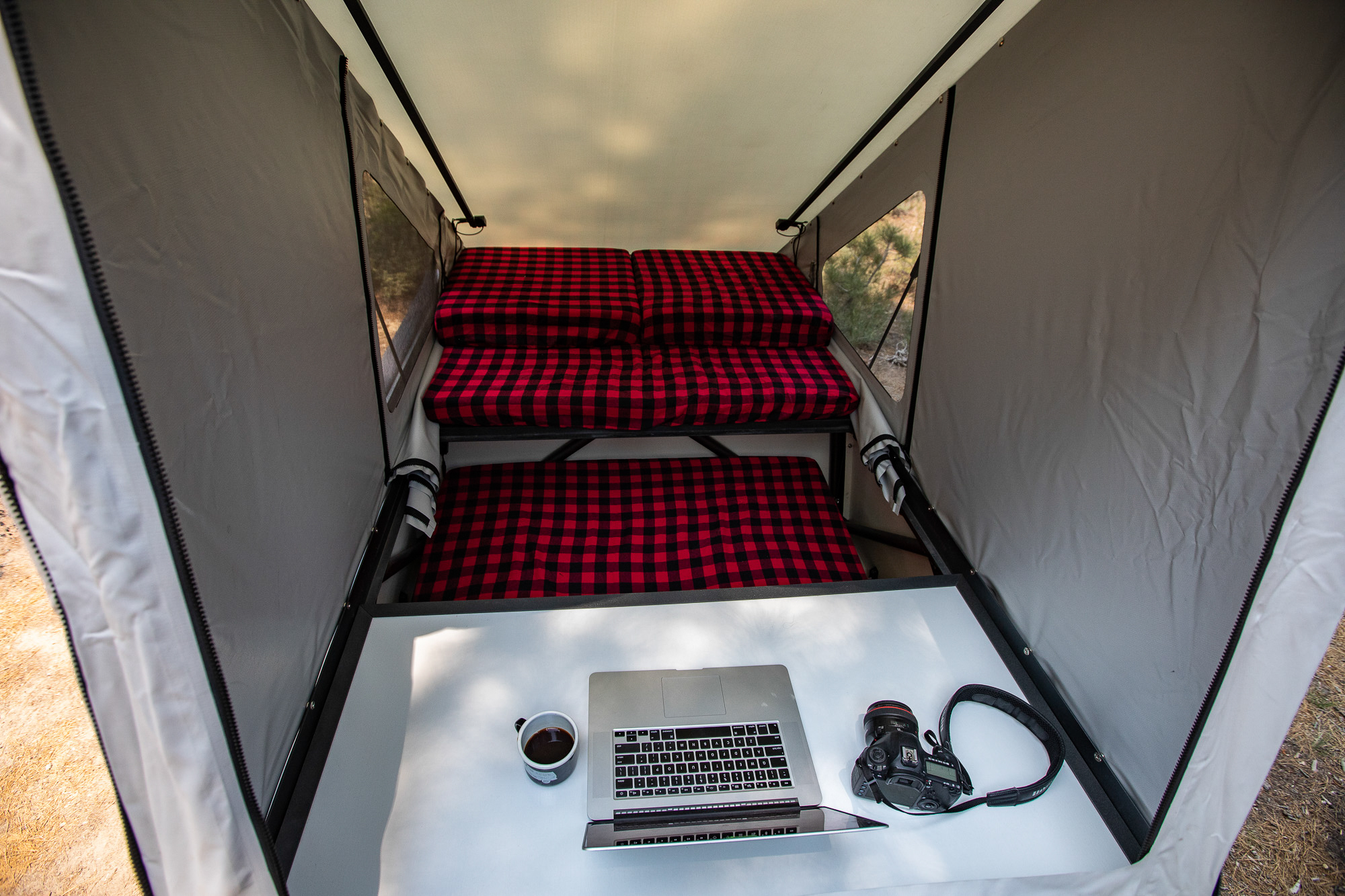 One of the most unique features of the GFC has to be the extrusion on the outside. It gives you so many opportunities to add things like awnings, a ladder, levels and any other accessory you might want! You can get some of their T-slot nuts and attach virtually anything you can think of. I am using them to mount an ARB 2000 awning with their custom awning mounts, along with some levels that make getting the truck perfectly flat at camp super easy. Also, the mounts for the camper to the bed are custom products with lots of places to attach or tie things down. I use them to keep my Action Packers in place while flying down the trail! 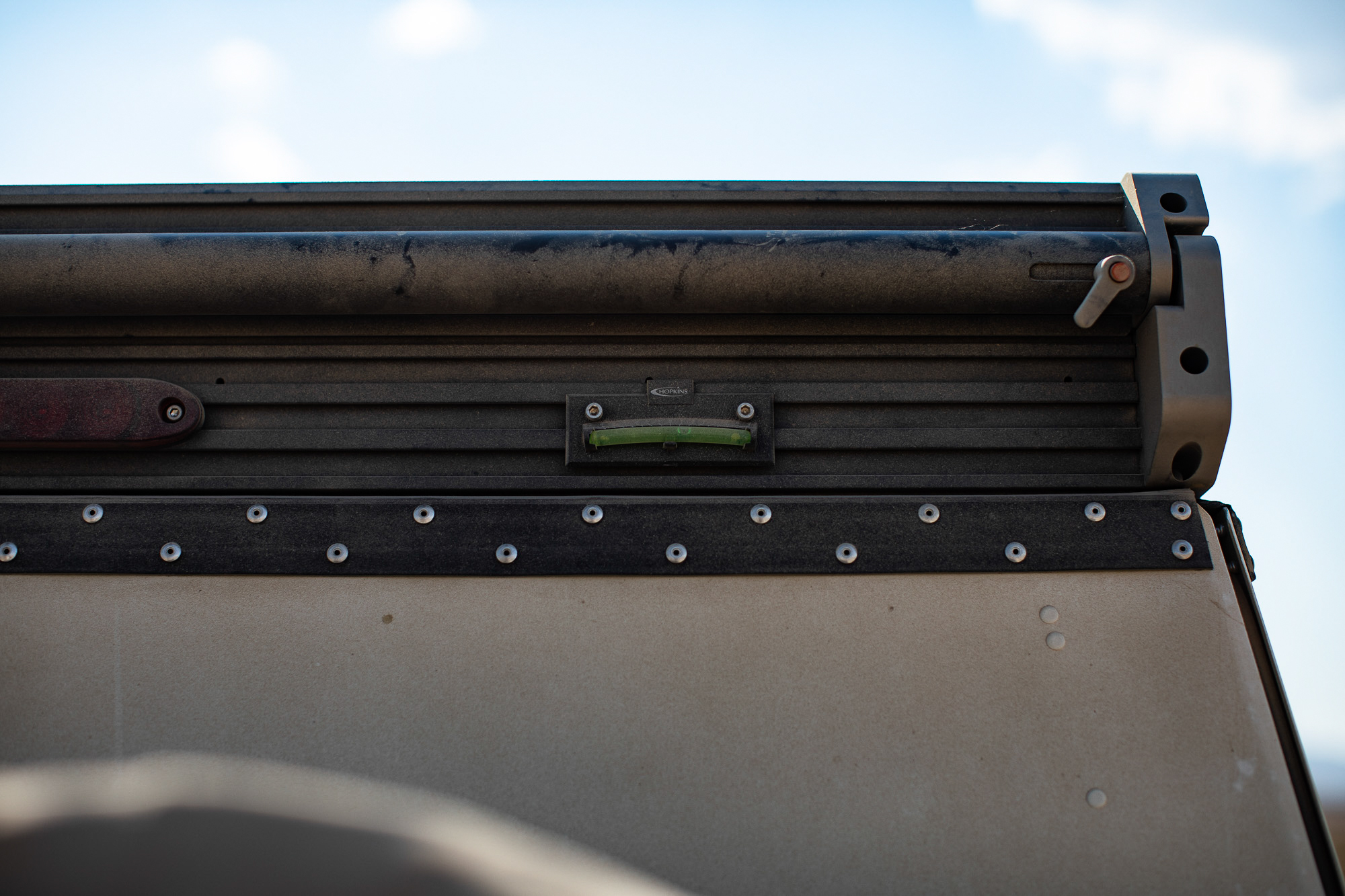 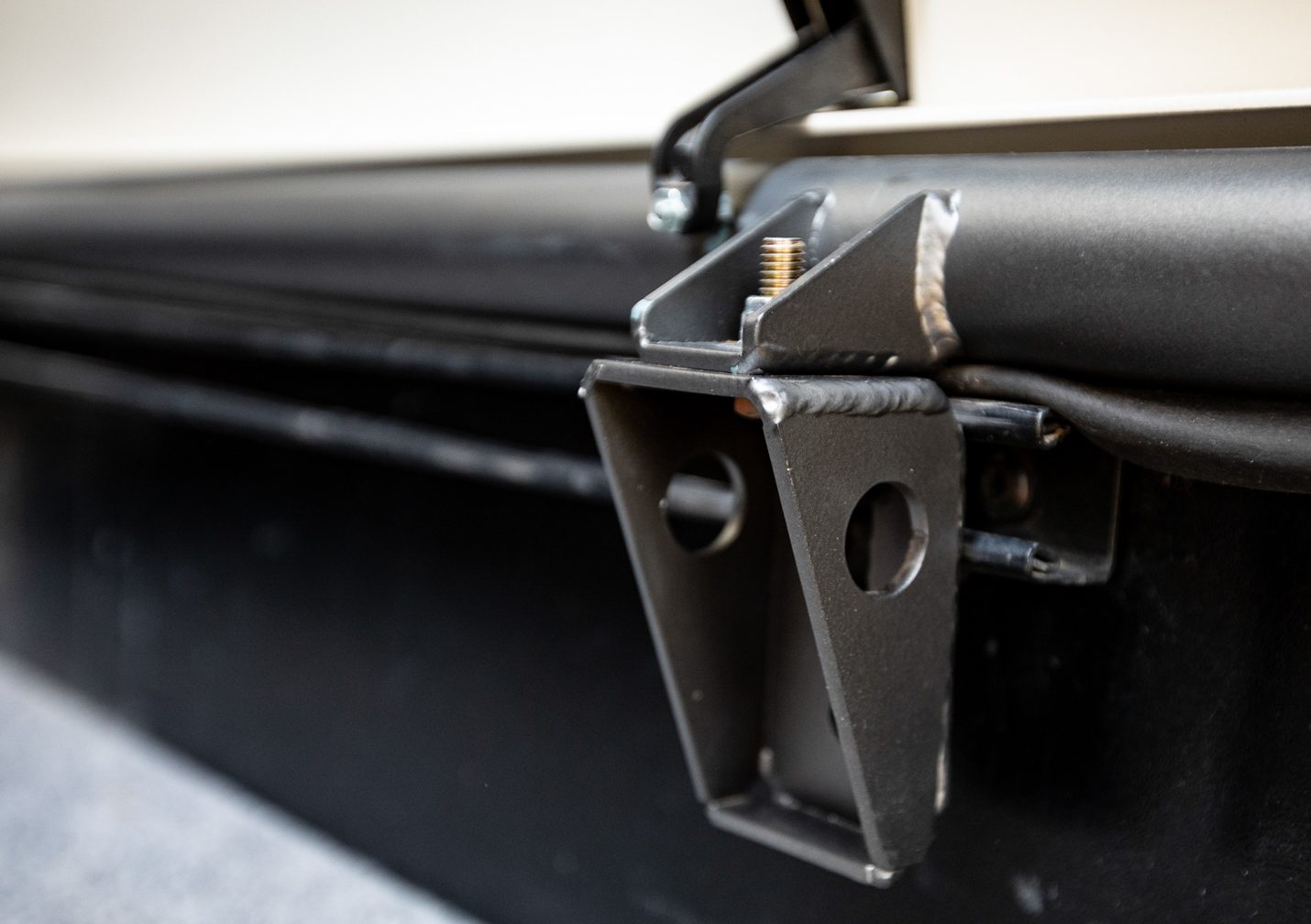 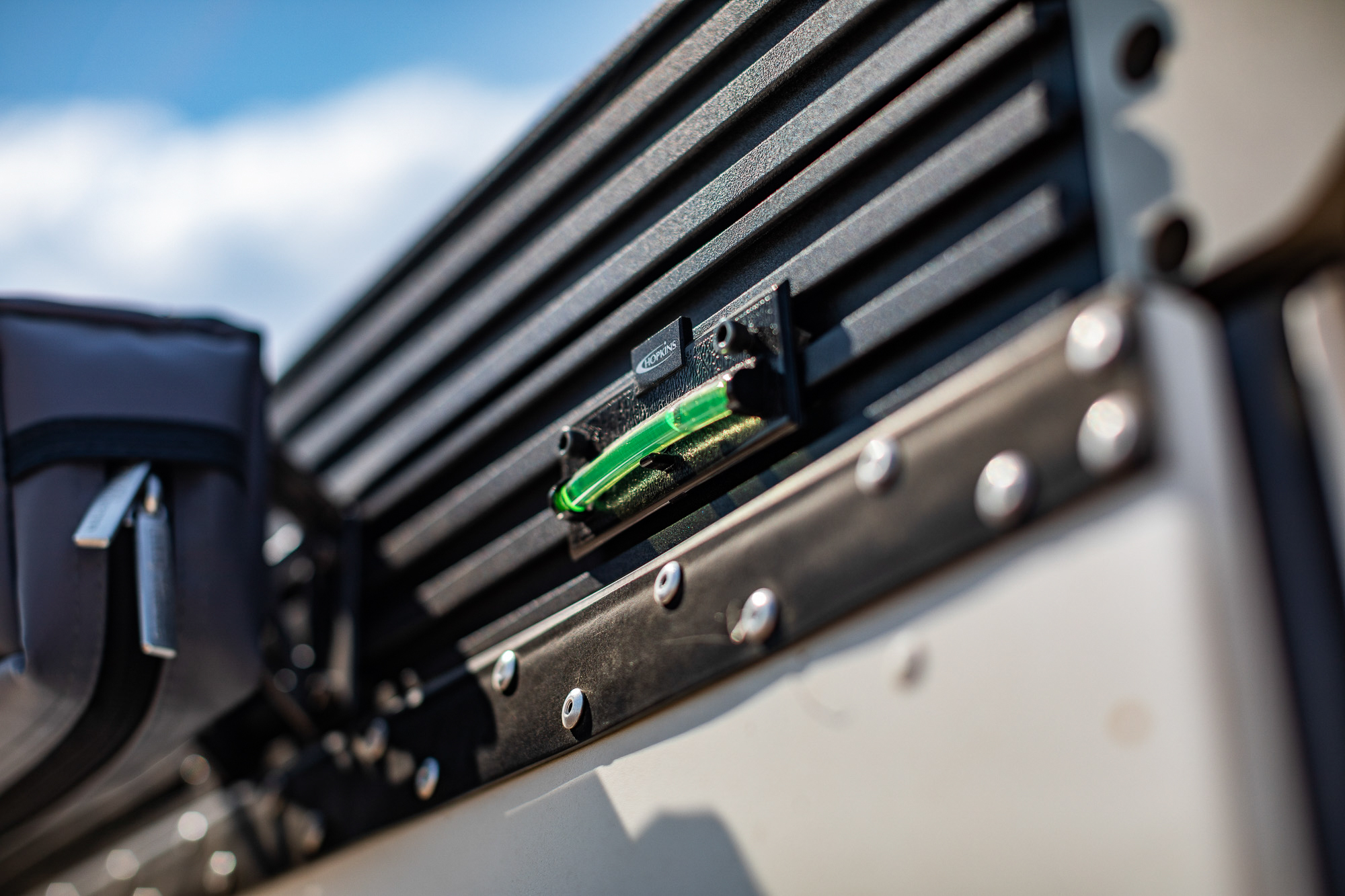 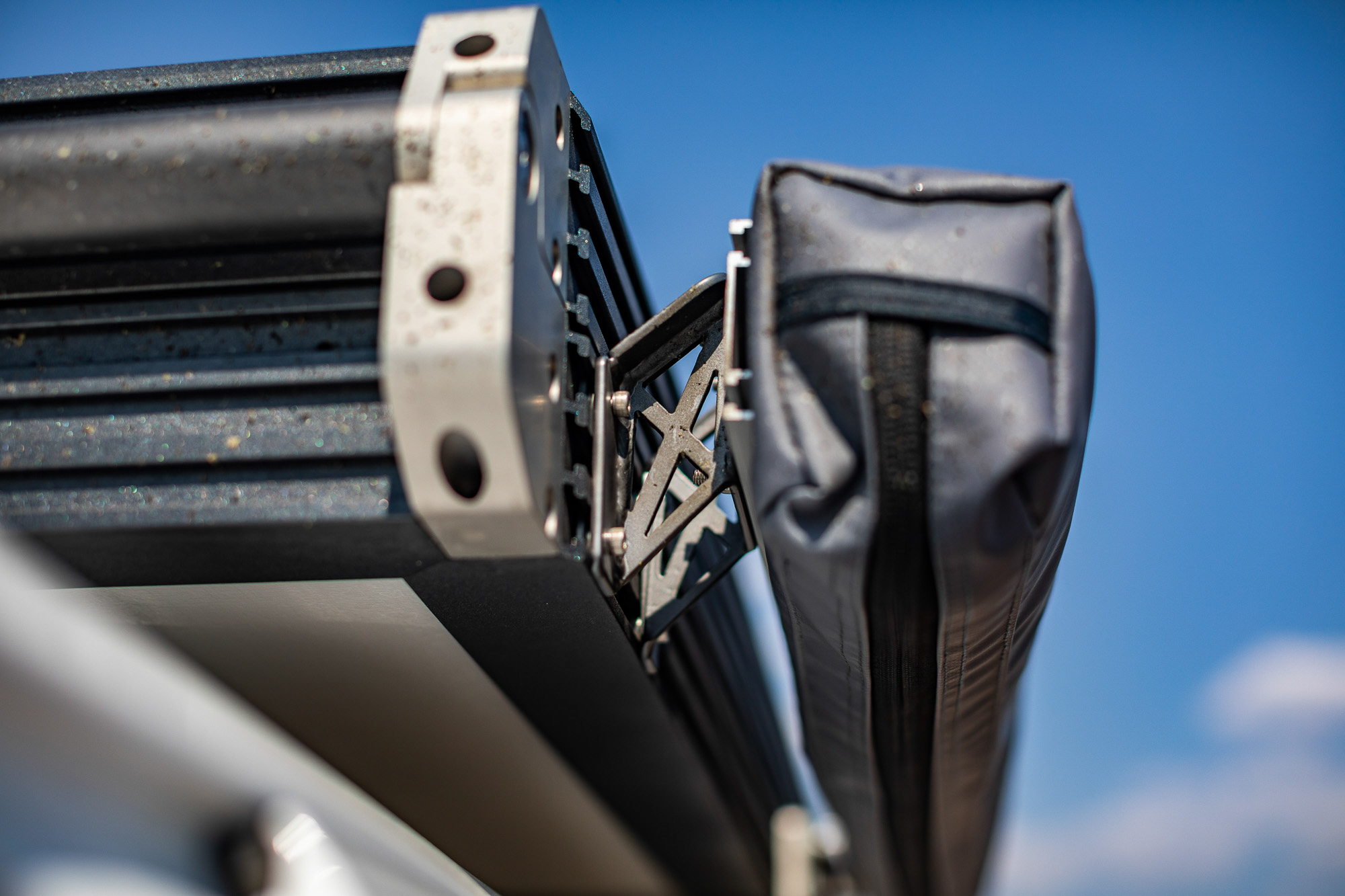 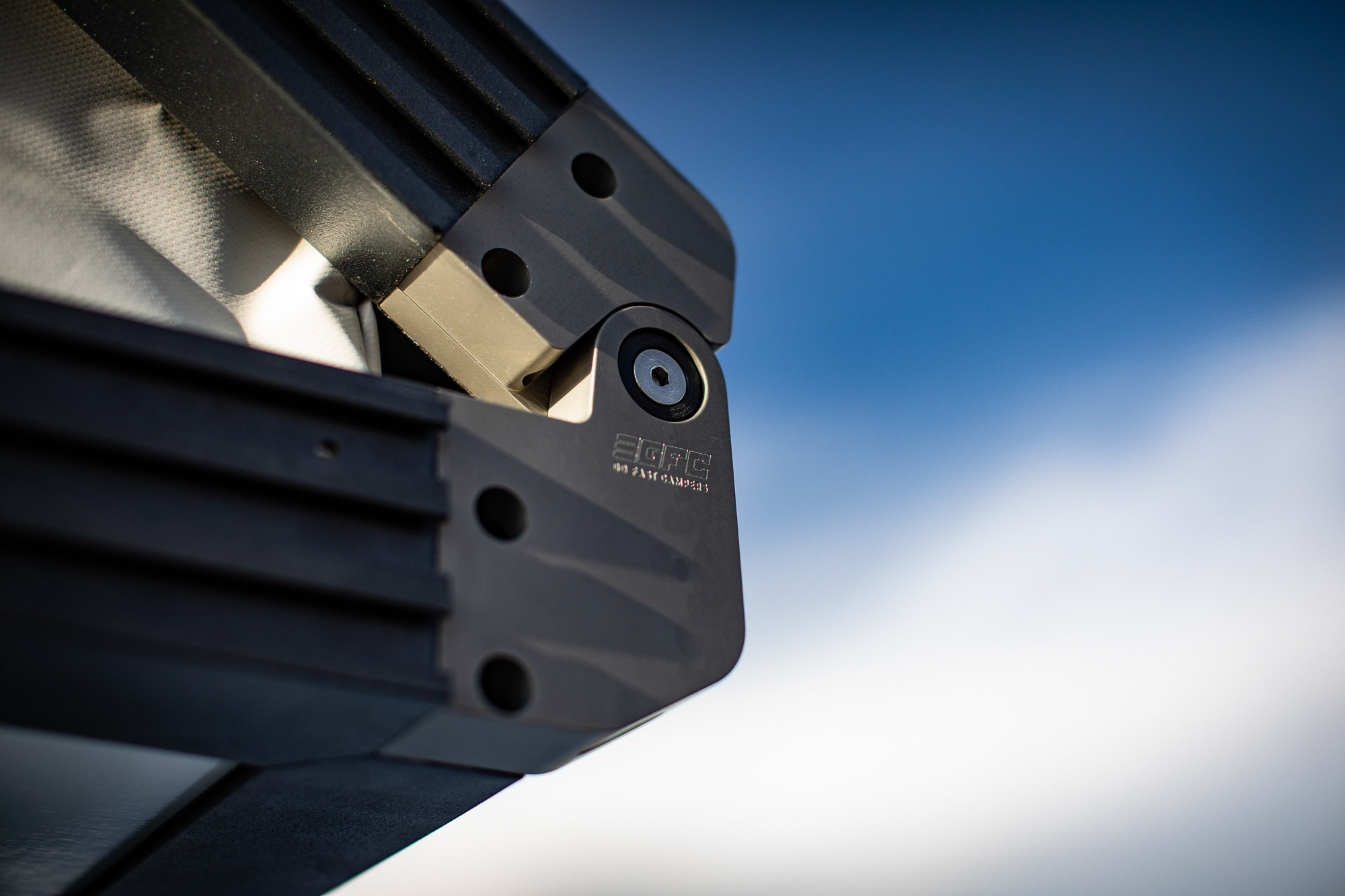 There has to be something I don’t like, right? Well, of course, but this was one thing I had to think about. I’ve already addressed some of the initial concerns people have (and I had). The size doesn’t bother me, the panels don’t bother me, but I would like to see an option for bigger side windows. I know they have a reason for having one big and two smaller ones, but  I’d like to be able to unzip a big window and take photos out of the side or get out with a ladder if I ever chose to do that. One more thing I’d like to see is a zipper at the bottom of the big window. Right now, there is velcro for the bug net side, but the outer panel isn’t held down, and a zipper would be a nice addition. I’m sure GFC is listening, and will take all these into consideration. They’ve been very open to questions and concerns over on TacomaWorld, and have implemented some things based on suggestions of customers and potential customers. One example of that is after my first week in the camper I gave them some feedback on the hinge being inside the panel, and they made a revision based on that feedback. Now you may notice the graphics are different pre and post update. 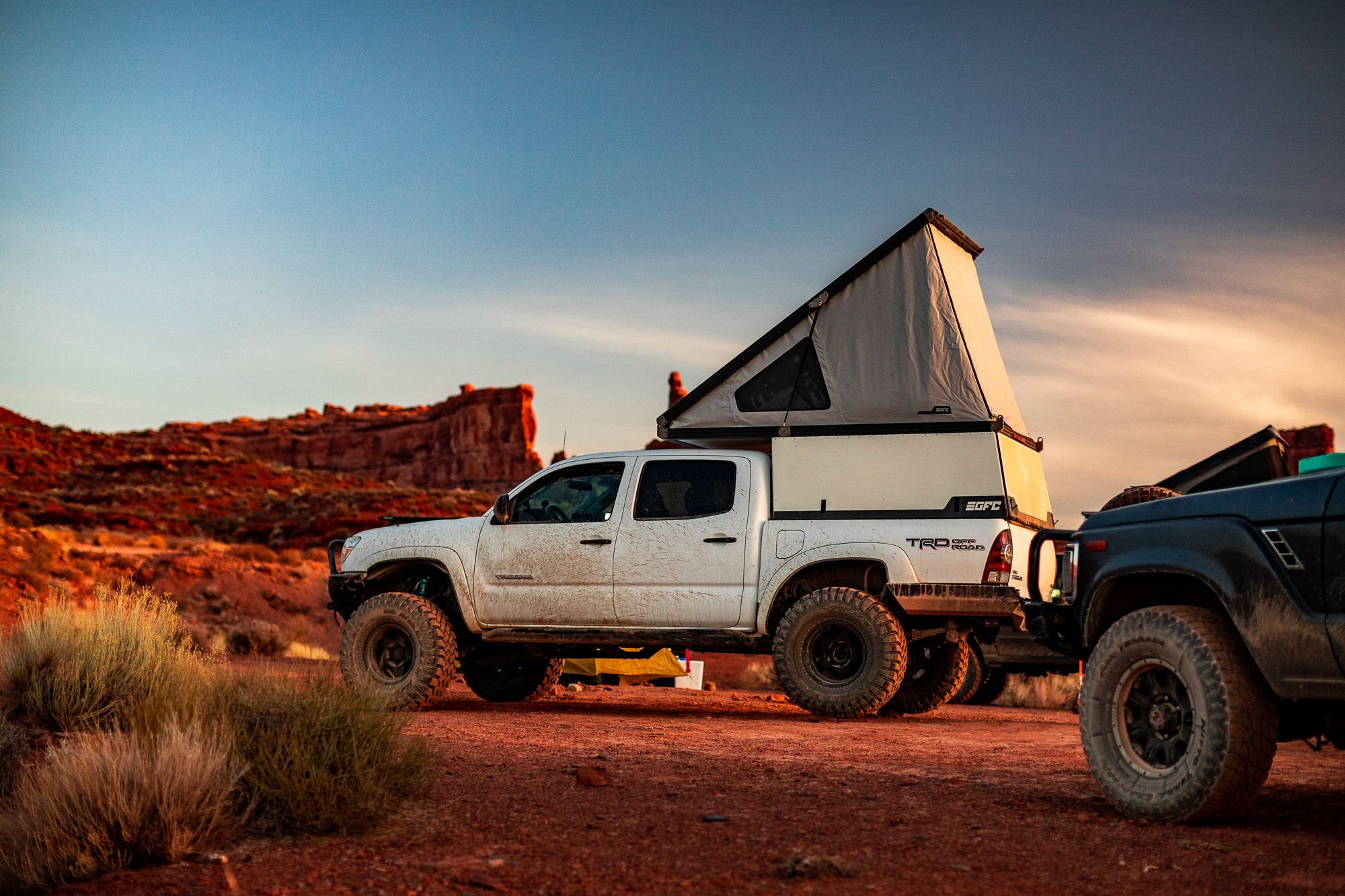 I love this camper for a lot of reasons, but I’d like to drive home a few of my favorites. For starters, it’s made right here in the USA. Graeme and Wiley have done everything they can to keep this thing 100 percent made here, and are employing a crew of some really awesome people. Next, the build quality and fit/finish of this camper are second to none, and I’ve been in all of them. Everyone that has seen my camper has said that same thing. Third would have to be its modularity. Being able to open all the panels and have a couch set up and the full bed to move around in is awesome, but it’s also great to completely close it off because it’s a much smaller area to keep warm. Plus, being able to completely open the bottom part and hang out while still feeling like you’re outside is just awesome. No other camper out there is as modular to fit your specific needs in my opinion. I’ve had well over 25 nights in my Go Fast now, and I haven’t looked back. It has exceeded all of my expectations. So with that said, I’m very excited to see not only where I go in my GFC, but where others go in theirs! 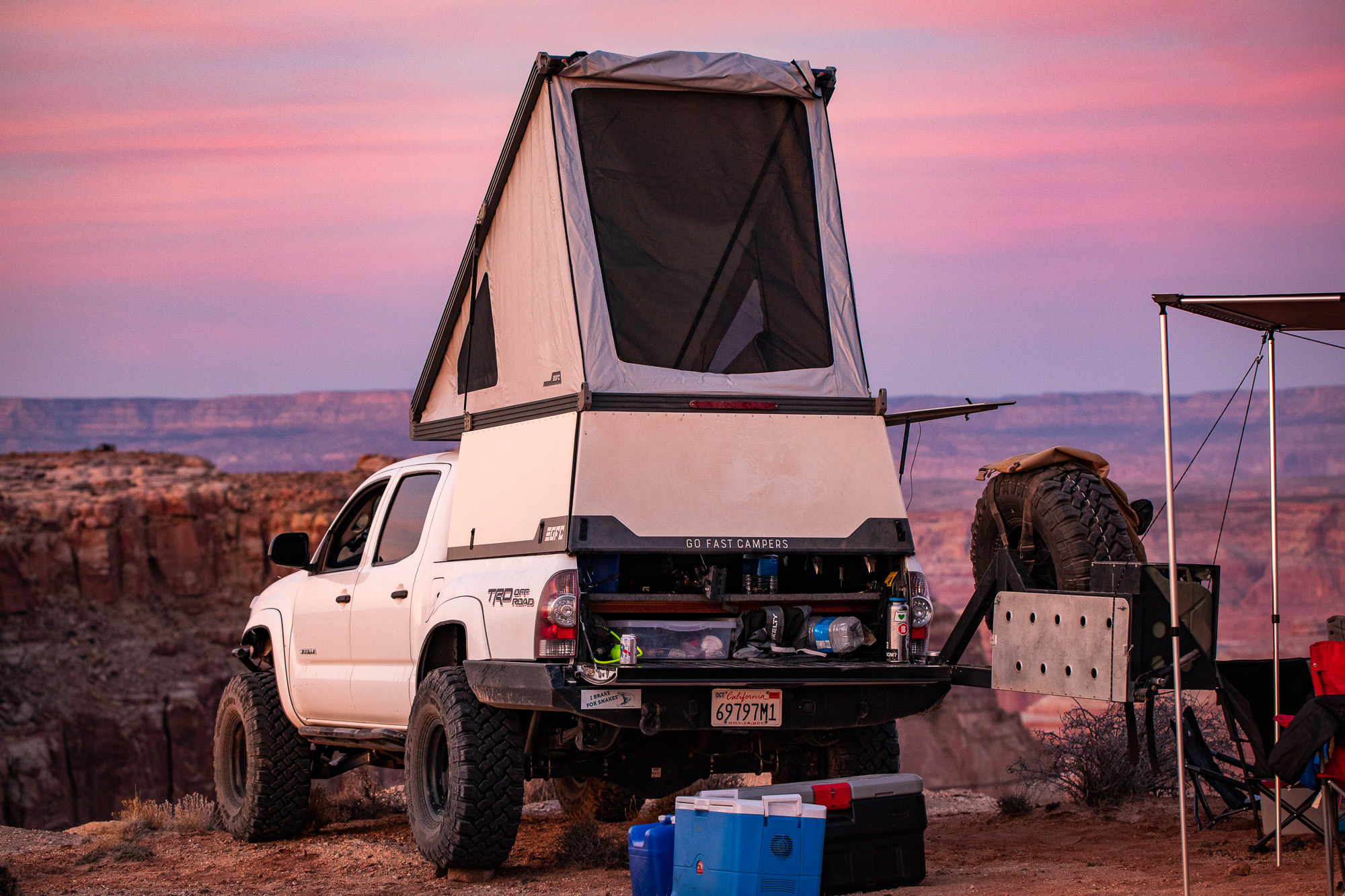 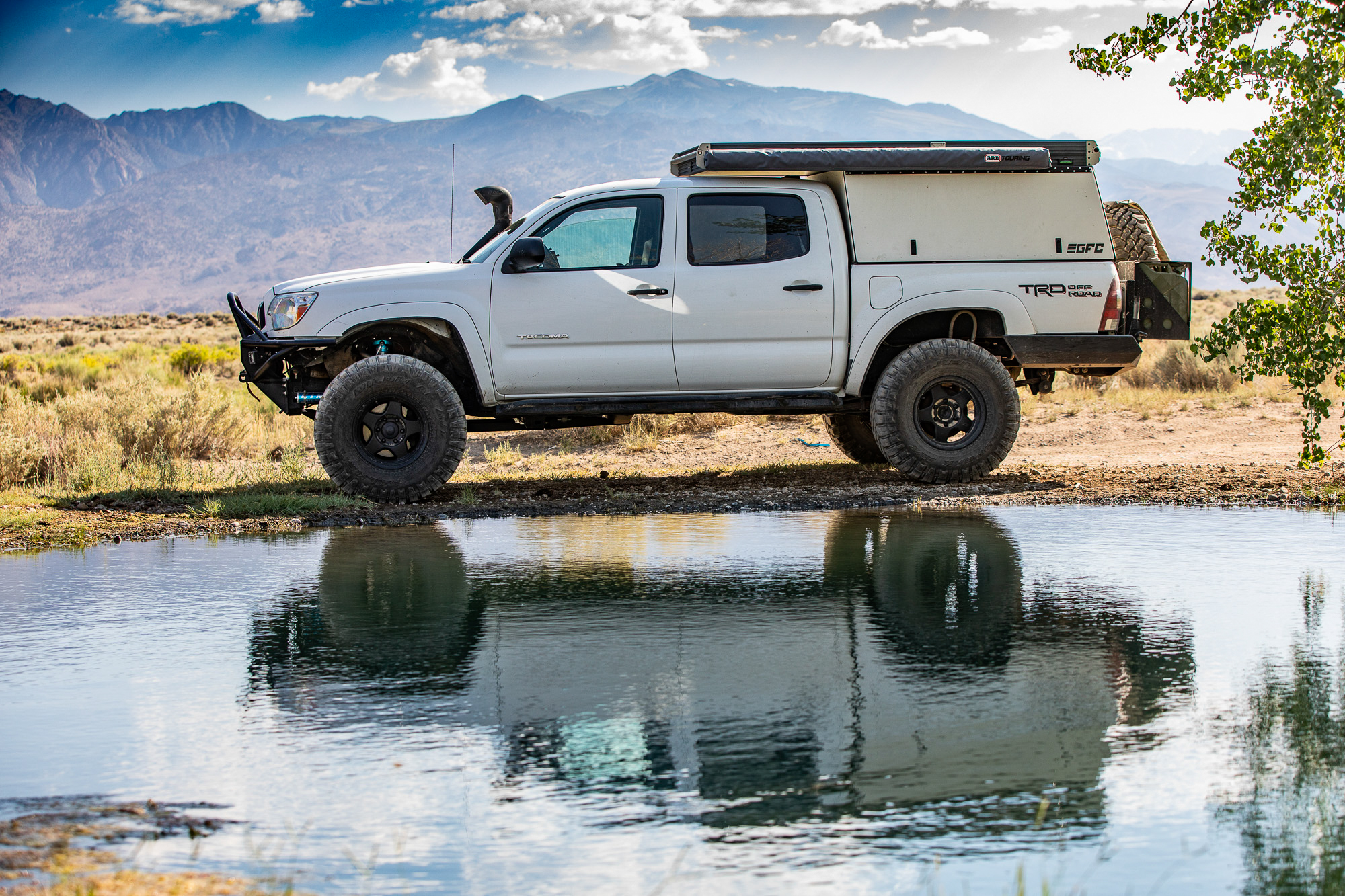 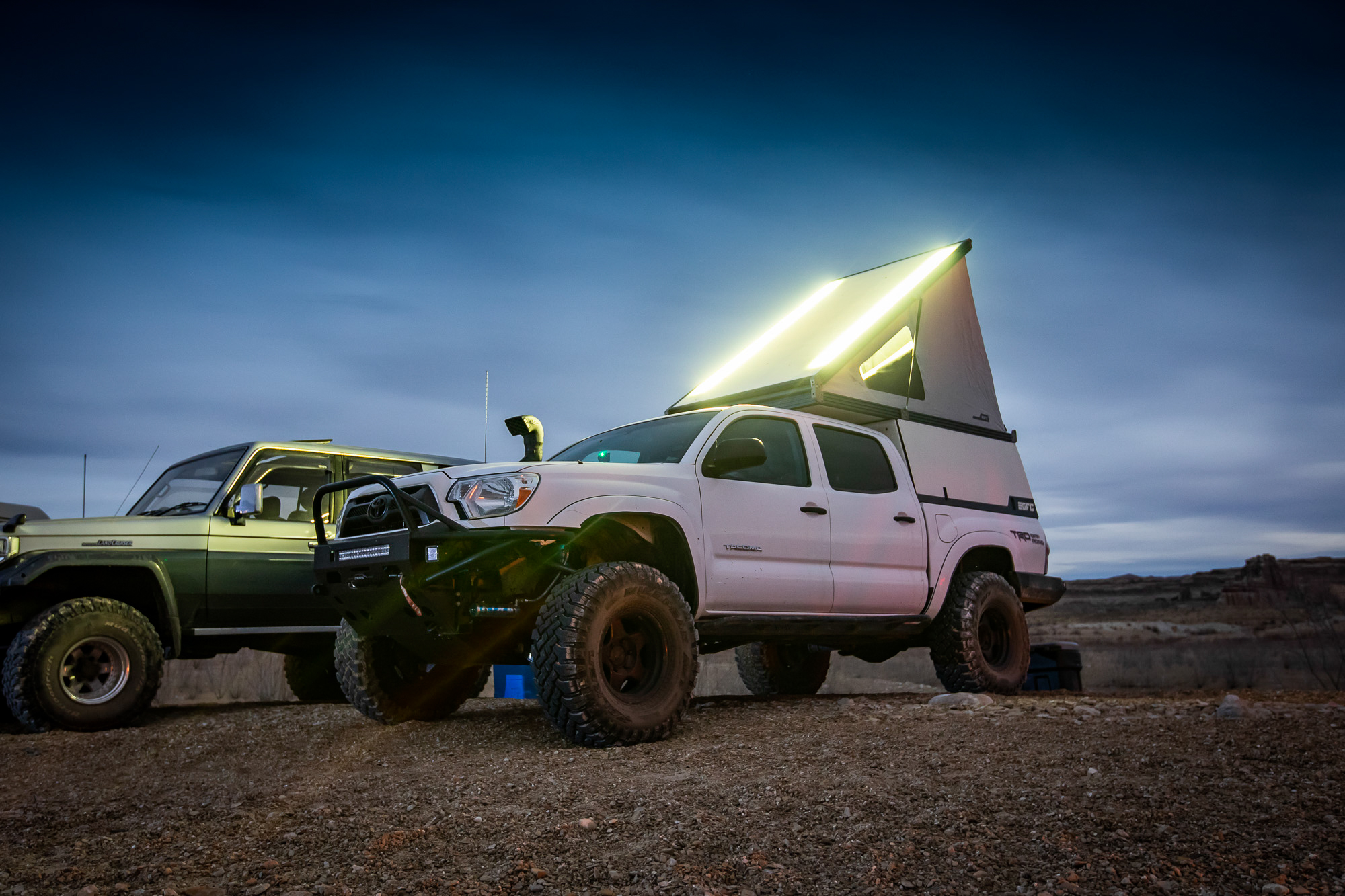 Jim is from Santa Barbara, CA and works as a professional videographer/photographer that has a passion for the outdoors, wildlife and anything with an engine.

Visit the Royal Geographical Society and Meet the Explorers 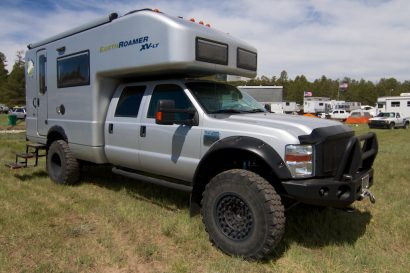 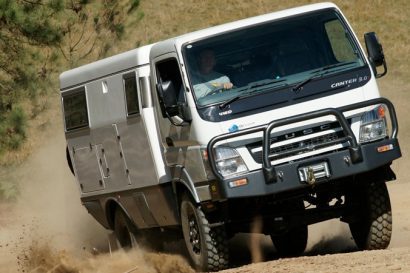 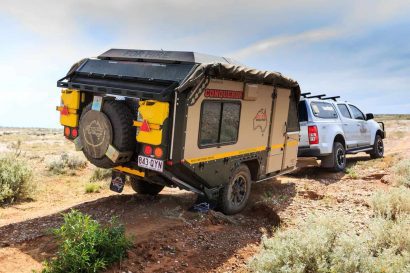