It is not often that the durability of a product demonstrates itself in a dramatic, almost unbelievable fashion. Typically, we buy a quality, well designed accessory and it goes about its expected business with little drama and thankless service. But that all changed in the month of December when the most unbelievable of things happened; our long-term test Jeep was hit HARD on BOTH bumpers in two separate accidents.

All told, AEV bumpers cost $3,000 for front and rear on a Jeep Wrangler and include some thoughtful design elements and a factory look. They are constructed from stamped steel and are designed to work with the airbags and within the crash performance of the stock Jeep. $3,000 seems like a chunk of cash, but how much can they save you? We found out.

Expeditions West conducts training for certain “special” groups within the US Government. Most of the time these training projects are conducted without incident, but this past December that changed in a split second when one of the operators was backing up our 2004 Tacoma at speed and had limited visibility. He didn’t see the Overland JK and impacted the Jeep at an estimated 10 mph. The tailgate impacted the AEV bumper first, crushing in several inches and flipping up, breaking the bed extender. With the tailgate up, the Tacoma’s rear bumper hit next, crushing it in and folding it under, impacting the rear quarter panels. The bed also took a big hit, crumpling the bed floor and pushing the bed into the cab, causing additional damage. All told, the Tacoma had $3,887 worth of damage. The AEV bumper damage was limited to the surface smearing of the powdercoat. It didn’t even dig deep enough to show metal. The small sheet metal grill was dimpled and easily straightened.

Notice only the powdercoat was smeared. The Lightforce died valiantly.

The Tacoma, not so good. 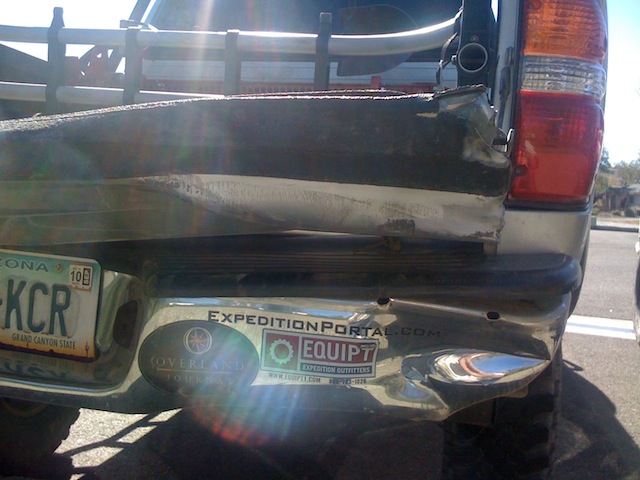 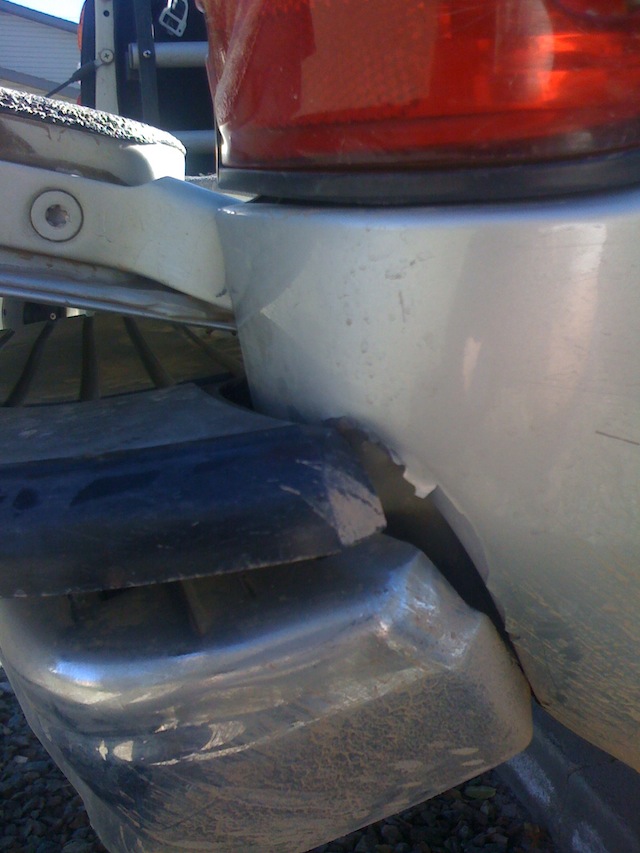 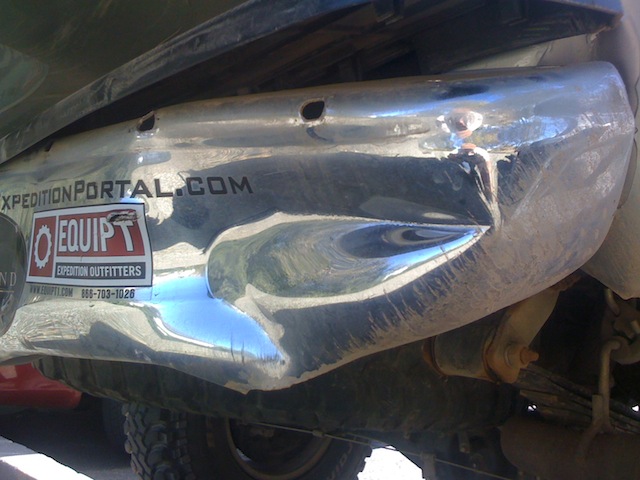 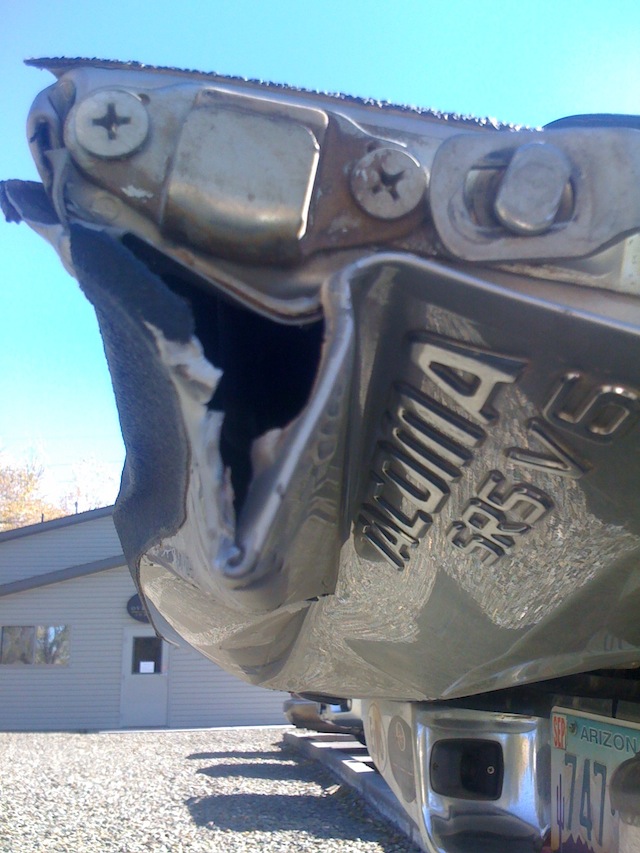 Damage to Jeep and AEV Bumper: <.h4>Cosmetic only. $10 can of AEV powdercoat touch-up paint.

Unbelievably, just two weeks later, the Jeep was in Phoenix, minding its own business when it was rearended by a 17 year old texting on his phone (big surprise). The Nissan’s bumper was crushed in and the hood was buckled. The truck was not drivable. Total damage to the AEV bumper – NONE. The shocking thing is that the spare tire took the majority of the hit and right at a major leverage point. The BFG tire tread mark is visible on the Nissan’s hood. The Jeep tailgate has no damage and the bumper works perfectly. 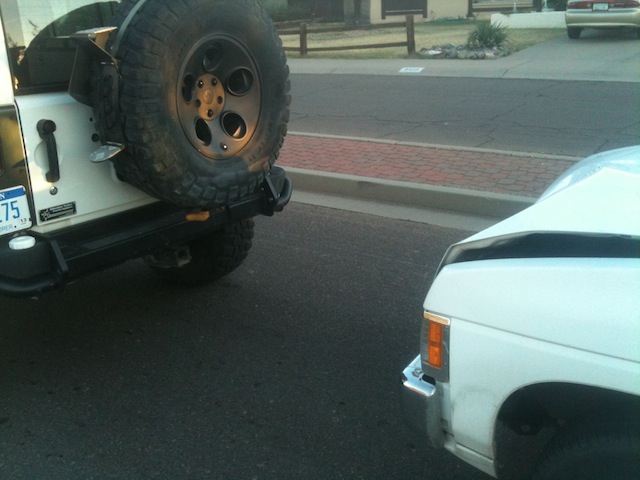 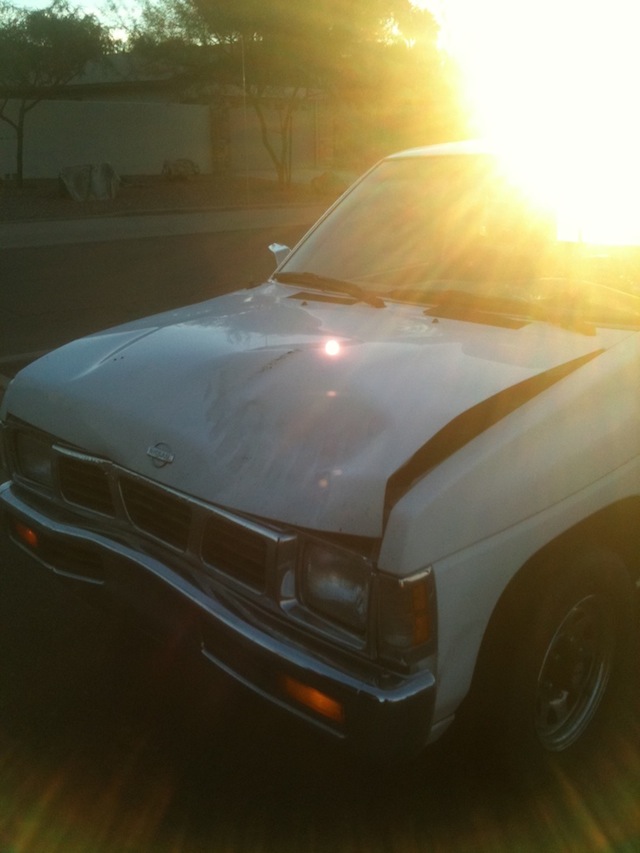 People often complain about the cost of high quality products but the value here is clear. Imagine if these accidents had happened in Honduras or Turkmenistan – they could have been trip ending for the Jeep. Buy the best.