Aimed at those more likely to blast through the desert on the weekend as opposed to hitting the trail to crawl, The Gladiator Mojave is Jeep’s answer to competitors like the Toyota Tacoma TRD Pro and the Colorado ZR2. Still equipped with a solid front axle (yay!) the Mojave behaves a bit differently than the competition, but we think that’s a great thing.

Solid axles are outdated and independent suspension now offers most of the capability and performance of a beam axle, while greatly improving ride quality and handling. Do we have that out of the way? Good. When compared to all of its competition, sure, it’s probably the worst on the Nürburgring, but this is a vehicle that’s actually built for off-road use. It’s not the performance version of an economy truck you’d usually see at Napa wearing a hat and delivering parts around town. 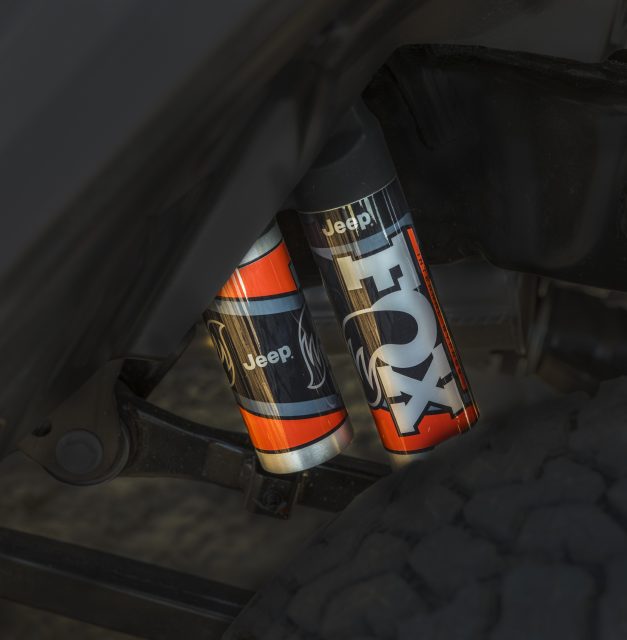 You should buy this truck because it’s different and because there’s a good chance it’s the last bastion of the solid axle on a mid-sized truck. I have to commend Jeep for how well these Gladiators (regardless of model) drive on the road. Aided by a long wheelbase, the Gladiator doesn’t really wander, and its handling is predictable at the limit of street driving.

When you start going hard off road, I honestly think it’s easier to drive aggressively than its independently-suspended competition, even though logic says otherwise. The problem with independent suspension is that its minimum ride height is constantly changing whenever the suspension is compressed, and the Tacoma TRD Pro and ZR2 really just don’t have enough wheel travel to put that compromise to rest.

For those looking to eventually modify their vehicles with a suspension lift or larger tires, it’s also far simpler and cheaper to do it on a solid axle than worrying about the major corrections needed to properly lift an independent vehicle. For example, my personal Jeep Gladiator runs 37-inch tires on a factory MOPAR 2.5-inch lift kit and is completely within OE alignment specifications. How much work would you have to do to fit 37s on a Colorado or a Tacoma? Did I mention my lift was $1,200 installed and didn’t void my warranty? 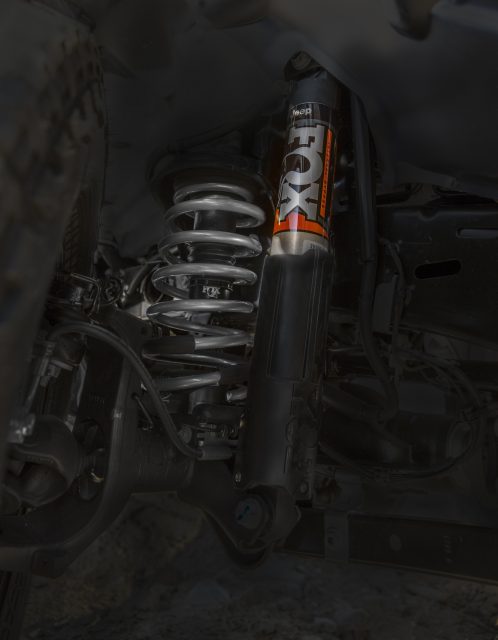 The Mojave is softly sprung, with plenty of dampening capability from the 2.5-inch FOX Remote Reservoir shocks that also feature internal bypass technology—on paper, this is a lot like what you would find on the first-generation Ford Raptor. This combination creates class-leading ride quality for the type of rugged (but not often high-speed) terrain that overlanders are typically traveling over. The Mojave sees the addition of FOX hydraulic bump stops on the front axle, which while I didn’t launch Jeep’s courteously loaned press vehicle to test them, I’ve had my personal Gladiator in some precarious (and possible airborne) scenarios. I can tell you that it would be a welcome improvement for additional high-speed compression dampening.

The added addition of cast-iron knuckles on the front axle will also greatly aid with the problem that some Wrangler and Gladiator owners have had with durability. This might sound like a small addition, but the only fix for every other Gladiator is an all-new aftermarket axle housing. Those keen on pushing the Gladiator to its high-speed limits should look nowhere else if not for the cast-iron knuckles alone. 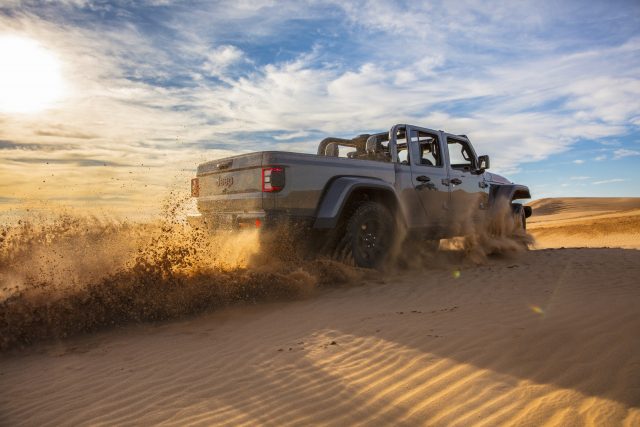 Chevy likes to accent black plastic with black plastic and a side of black plastic, the literal embodiment of accountants ruining a vehicle. Toyota likes to give you a durable interior, though it looks like it is from 10 years ago. And in a strange change of events, Jeep is pushing into the boundaries of luxury with the Gladiator.

The Mojave takes the Gladiator in a direction it hasn’t really gone before—it’s loud and proud and orange. Which is to say, those who have a strong aversion to the color may not like it. For me, orange just happens to be one of my favorite colors, so I appreciated the orange stitching throughout the interior on the dash, shifter boots, and most importantly, the sporty steering wheel that I’d absolutely love to have. As compared to the standard leather steering wheel, this unit has a more triangular shape, with extra grip at 10 and 2. It really adds to the occasion of the vehicle, and I suspect it’s something that (if offered), a lot of Rubicon owners would choose to put on their vehicles.

The Mojave may not have the quietest or most-spacious cabin, but it’s also the only pickup truck with four removable doors, a roof that comes off, and a windshield that folds down. But there are going to be a few compromises here and there. Overall, the interior noise (vibration and harshness) is still totally acceptable.

For a car that has had so much design effort built into it, why is the inside of the removable hardtop still white?

What’s Up With The Hood?

Aesthetically, it would be very hard to tell the Mojave apart from any other Gladiator if it wasn’t for the hood, which sports a massive front ram-air intake that looks quite attractive. When you sit in the Mojave it feels different, with the large hood making the machine feel more race truck than rock crawler, at the expense of decreased forward visibility.

I’d be fine with losing a bit of forward visibility if the ram-air hood actually did something, but it’s totally fake, with grills that are nothing more than visual trickery. It would also be nice if the hood didn’t weigh 8,897 pounds, which honestly makes it difficult to lift, and god forbid you accidentally drop it, because it will fall with the force of Thor’s hammer—hopefully, your fingers aren’t in the way. 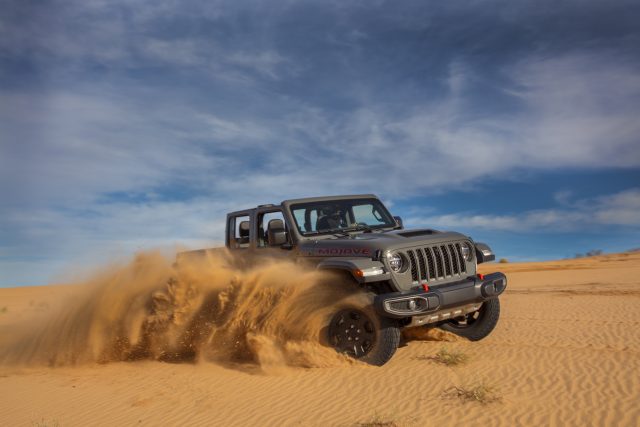 Both the Tacoma and the Colorado ZR2 feature fake hood scoops or vents, but that’s not an excuse for Jeep to do it. I hold them to a higher standard. I find it important to mention this because as a brand, Jeep has always strived for authenticity with their Wrangler-family vehicles. The Rubicon package gets two functional heat extractors on its very attractive hood, so why wouldn’t this Rubicon-alternative Gladiator offer similar functionality?

Unfortunately, for me, it’s the biggest downside to the Mojave. You’re going to be staring at the massive hood all day, knowing that it doesn’t even serve a purpose and that it adds weight to the vehicle, and to me, that would be annoying.

Should You Buy It?

The Jeep Gladiator Mojave is a big middle finger to the competition. It’s fun, it’s fast and most importantly, it’s a happy car. On what else can to take the roof off of a pickup? While the competition is trying to spruce up their affordable mid-sized offerings into something exciting, the Gladiator relies on the economy of scale brought by its association with the Wrangler to offer something truly unique and purpose-built. Jeep is in a unique position to make something interesting that stands out from the crowd, and they’ve done it.

That being said, I think Jeep could have done a little bit more with the Mojave, and I wonder why we didn’t see more than a 1-inch lift kit. And why we didn’t see a larger tire fitted when we all know there’s room for it, as a 35-inch tire will fit in the stock spare location with room to spare, and since it is equipped with the high-clearance fenders, it can certainly fit a larger tire underneath.

However, the Mojave might actually be a better buy for the overlander than the Rubicon model. Most overlanders will never really take advantage of the incredible 4:1 low range gearing offered on the Rubicon, with the Mojave offering a more-usable 2.72 ratio. Overlanders also benefit from the reinforced frame, better stock suspension (that honestly does not need to be changed), and literally is just waiting for a larger tire to be dropped in. Let’s not forget the addition of the cast-iron knuckles that greatly improve the durability under punishing conditions (though it’s not really a major issue for most). 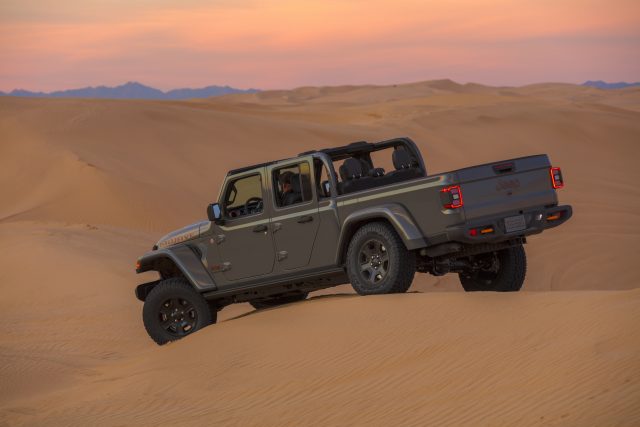 However, if you’re the kind of Jeep owner who is instantly going to spring for a lift kit and start modifying the vehicle themselves, I can’t really see the advantage of the Mojave, as most of the benefit comes from the package comes from Fox 2.5-inch shocks and hydraulic bump stops, which can be easily added in the aftermarket. Additionally, most Gladiator owners seem to be opting for 37-inch tires, paired with a 2- to 4-inch lift, which means if you intend to go down that route, I honestly think you’d see more value from the Rubicon which gets the magic swaybar disconnect and a front locker. But all of this remains true for the Colorado ZR2 and Toyota TRD Pro. At least with the Gladiator Mojave, your path to further upgrades are less costly and much simpler.

I think that in general, the Gladiator is a great buy, and that’s an opinion I’ve put my own dollars behind—paying full retail for my Gladiator when it first came out. More Gladiators allows Jeep to find more buyers, which allows them to do more cool special editions. The Gladiator Mojave is a winner in my book. I’d recommend it, but I would also tell the prospective buyer to take a look at other models of the Jeep Gladiator to see what’s best for you. If you’re not an aftermarket tuner, then the Mojave is about as much fun as you’re going to possibly have in a mid-sized truck.

Notable changes to the Mojave, as compared to a standard Gladiator: