Last month we published one of my biggest review projects of the year, a comprehensive roundup of hitch racks. At the exact time I was wrapping up the testing phase, Küat released their updated version of their venerable NV rack called, not surprisingly, the NV 2.0. I finally got my paws on that new product and although I’ve only had a month to evaluate it, I have to admit I’m quite impressed.

I first started using the original NV rack more than two years ago and in that time ferried all manner of bikes over tens of thousands of miles. As much as I loved it, there were a couple of things that I felt needed attention. Apparently Küat’s designers felt the same. The 2.0 addresses virtually all of those concerns and even improved on things I didn’t think could be improved. 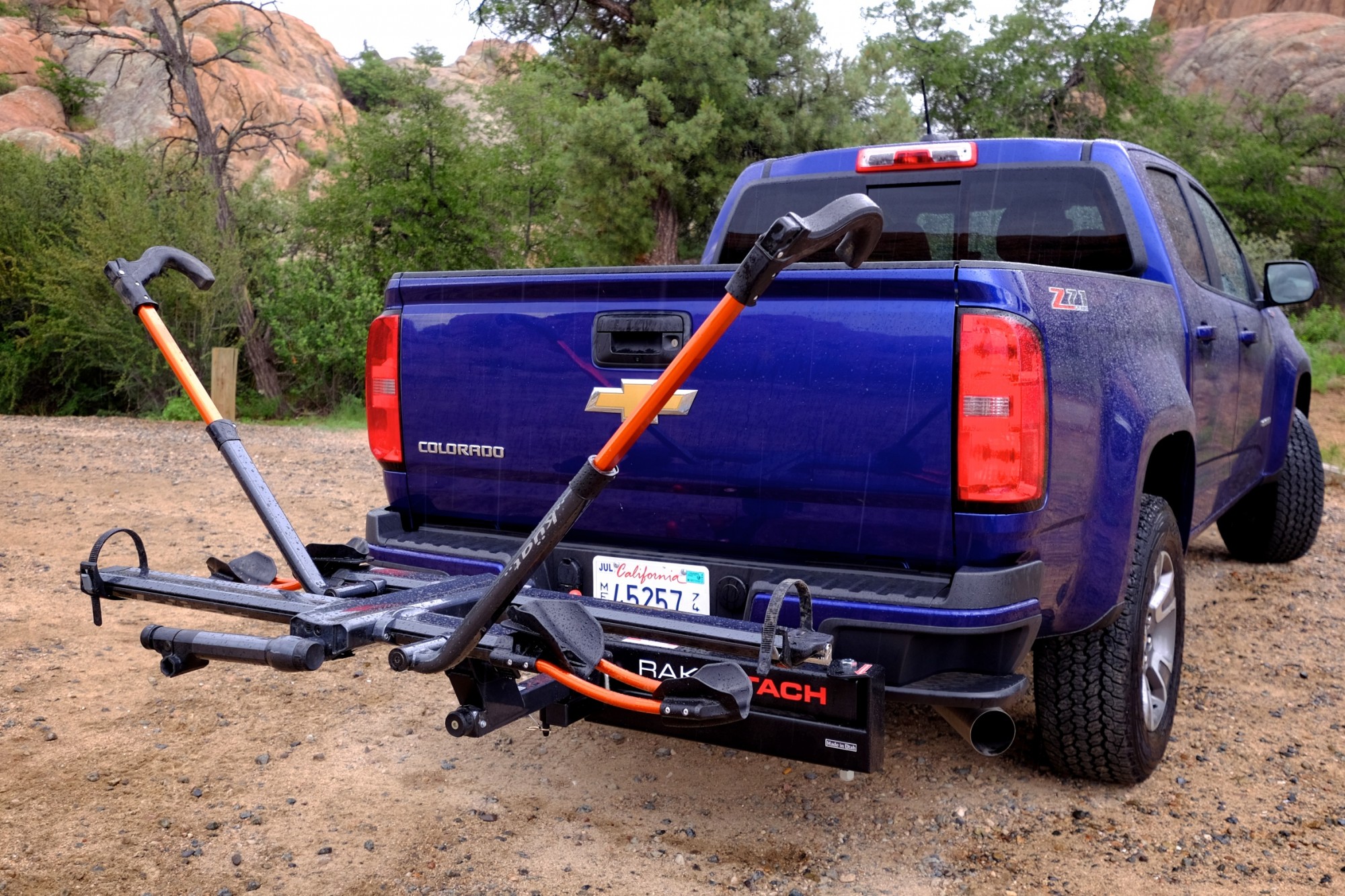 What stayed the same

I’m always nervous when a manufacture updates a product I already like. Sometimes they throw the baby out with the bathwater, but not Küat. The new rack retains the refined styling that all Küat owners know and love. The complex shapes of the aluminum trays and front wheel mounts are the same as before and the high-gloss powder coat finish is better than ever and looks––amazing. The orange anodized accents are the same and now the Küat reflective logos are permanently applied and again, look fantastic. 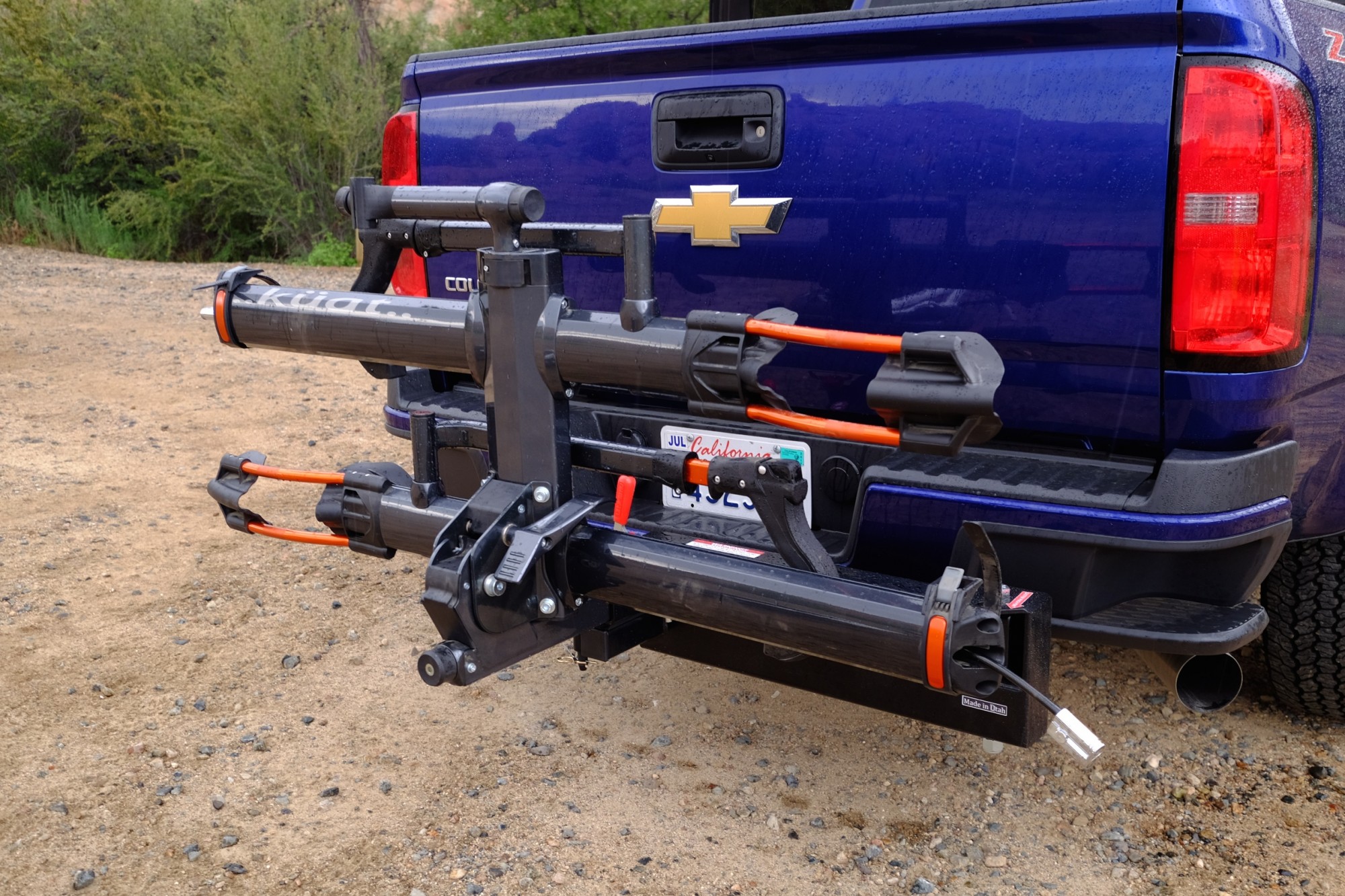 The most notable carry over is the tool-less hitch retention system that keeps the rack from wobbling about in the receiver. That, above all other features, is the one thing most Küat rack owners love most. The new retention knob is even sleeker adding to the elegant aesthetic of the 2.0.

The good made better

Like many racks in this category, the NV 2.0 can be positioned in upright, level, and lowered positions with the release of a small lever. Not to say the lever on the first rack was poorly placed, but the NV 2.0 now utilizes an enlarged actuator that is much easier to access and operate. It can even be pressed with a tap of a foot, keeping one hand free to hold a bike, the other available to lower the rack. I find I also don’t have to reach so far down to find the pivot release which makes raising and lowering the rack, particularly when fully loaded, much easier.

One of my original grievances with the first NV was the cable lock system. While I loved the thickness of the cables and how they conveniently slipped into the rack trays, they were often too short to fit through two bikes. The new rack solves that pickle by placing two locking mechanisms on each end which only need to reach far enough to wrap around the rear triangle of each bike. I like how this new system eliminates the need to have four feet of heavy cable draped over my bikes. 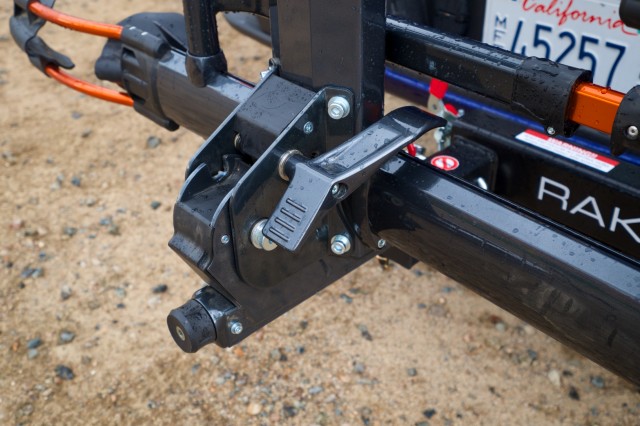 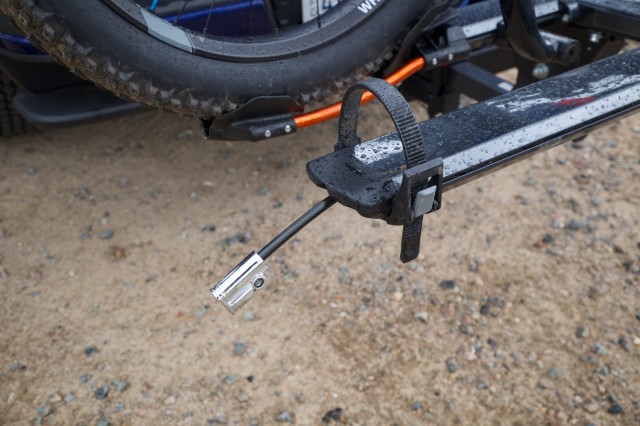 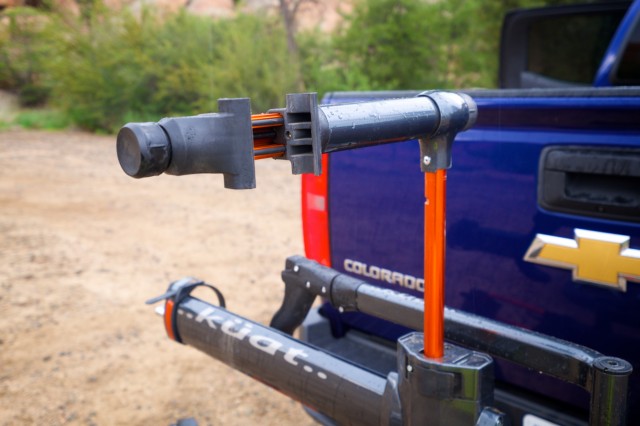 Another refinement to the 2.0 are the enlarged support arms, obviously redesigned to afford better clearance for wider tires and forks. That adaptation is applied to the new front wheel carriers which are wide enough for fat tires, but have a small recess for skinny road wheels.

A close inspection of the main pivot, an area of the previous generation rack I thought needed a redesign, appears to be much beefier and far more solid. Not to say I’m hard on my equipment, but this rack promises to endure many a mile of bumpy backroad better than the original rack. I felt durability was lacking with the NV, but the NV 2.0 feels––bomber.

This brings me to my favorite feature on the Küat NV and one of the most noticeable improvements to the NV 2.0––the Trail Doc repair stand. Not to say the first vision was crude, but the new unit is pretty slick. It not only looks 100% better, it integrates into the entire system more cleanly and it’s much easier to use. In a dark corner of my garage I have a $300 professional repair stand I seldom use, often opting to just pop my bike in the Küat stand. 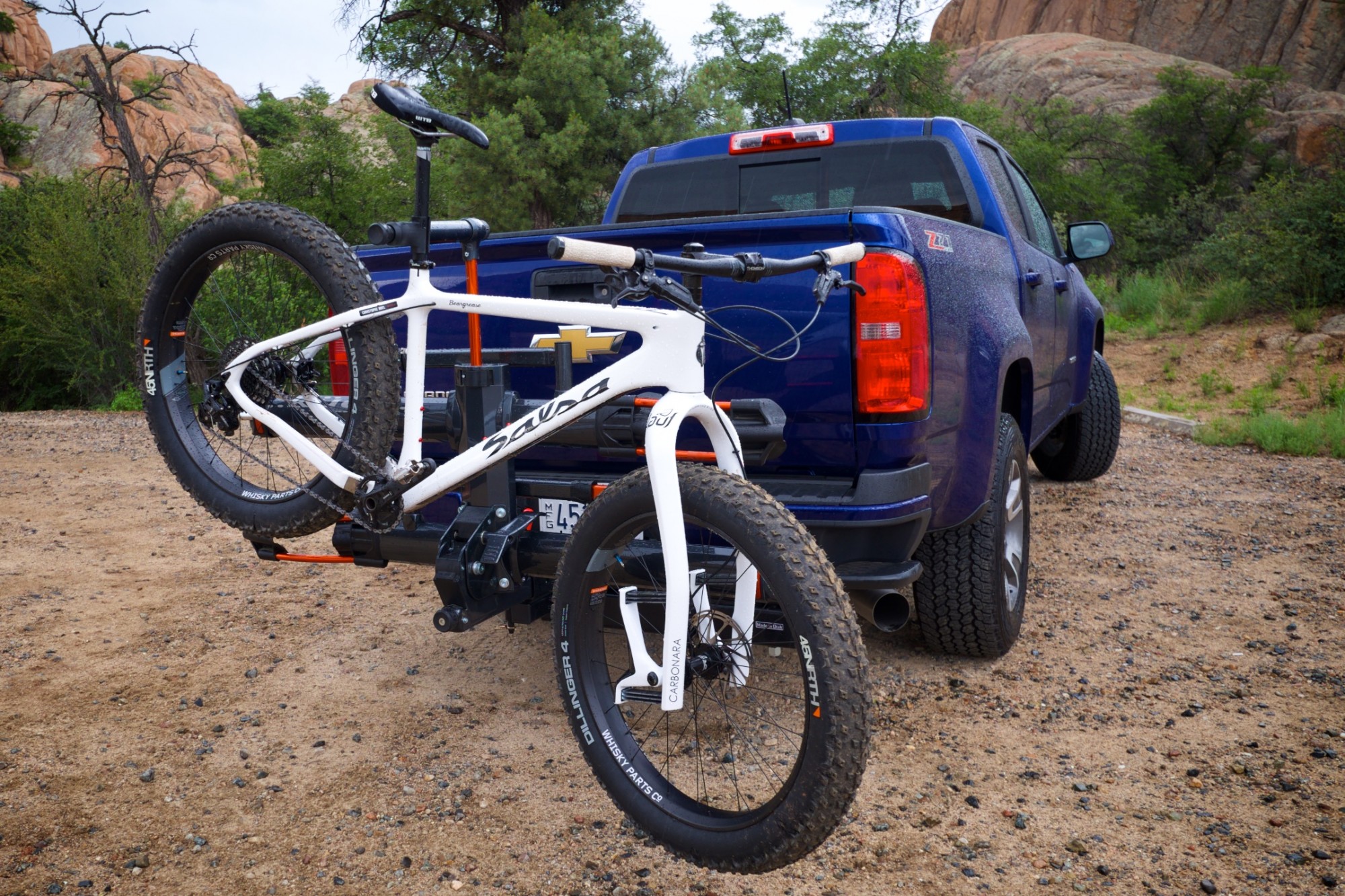 The less than perfect

If I’ve said it once, I’ve said it a thousand times. Even the best products in the world are never perfect. My primary gripe with the original NV was the inability to adjust the rack to eliminate bike-to-bike interference. The new rack offers a solution––sorta. The 2.0 features adjustable front wheel mounts which can be placed in one of three positions, high to low.

To test the new setup, I went to my local group ride where I proceeded to solicit volunteers to mount as many different combos of bikes to the 2.0 as we could. In about half of the scenarios, we got two bikes to fit with no need to fuss with the front wheel mounts. In about 25% of the combos we tried, the front wheel adjustments solved any interference issues. In the remaining 25% we had to resort to the old methods of manually raising or lowering seat posts or turning handlebars. It’s not a deal breaker, but something to consider. And for my standard disclaimer on the subject, almost all racks suffer from some bike-to-bike compatibility woes.

My only other quibble is with the rear wheel straps, which I found too short to fit over my 4.0 fatbike wheels. They are frustratingly––only 1/4” too short.

The hitch rack market is a competitive space. Thule and Yakima have both upped the ante with new racks which I think are pretty spectacular. As they are prone to do, Küat did the same. I still think their rack is the most aesthetically refined and once again, the tool-less mounting and Trail Doc features make it one of my favorite haulers. I was never fully disappointed with the durability of the NV, but this new rack is clearly more burly. Kuat had several years of feedback with the NV to suss out what elements of the updated rack needed to be addressed and they clearly made good use of that information.

Some may lament the price and assert it is too high, but I feel it is absolutely reasonable for what you get in return. Well done, Küat. Well done. MSRP $630 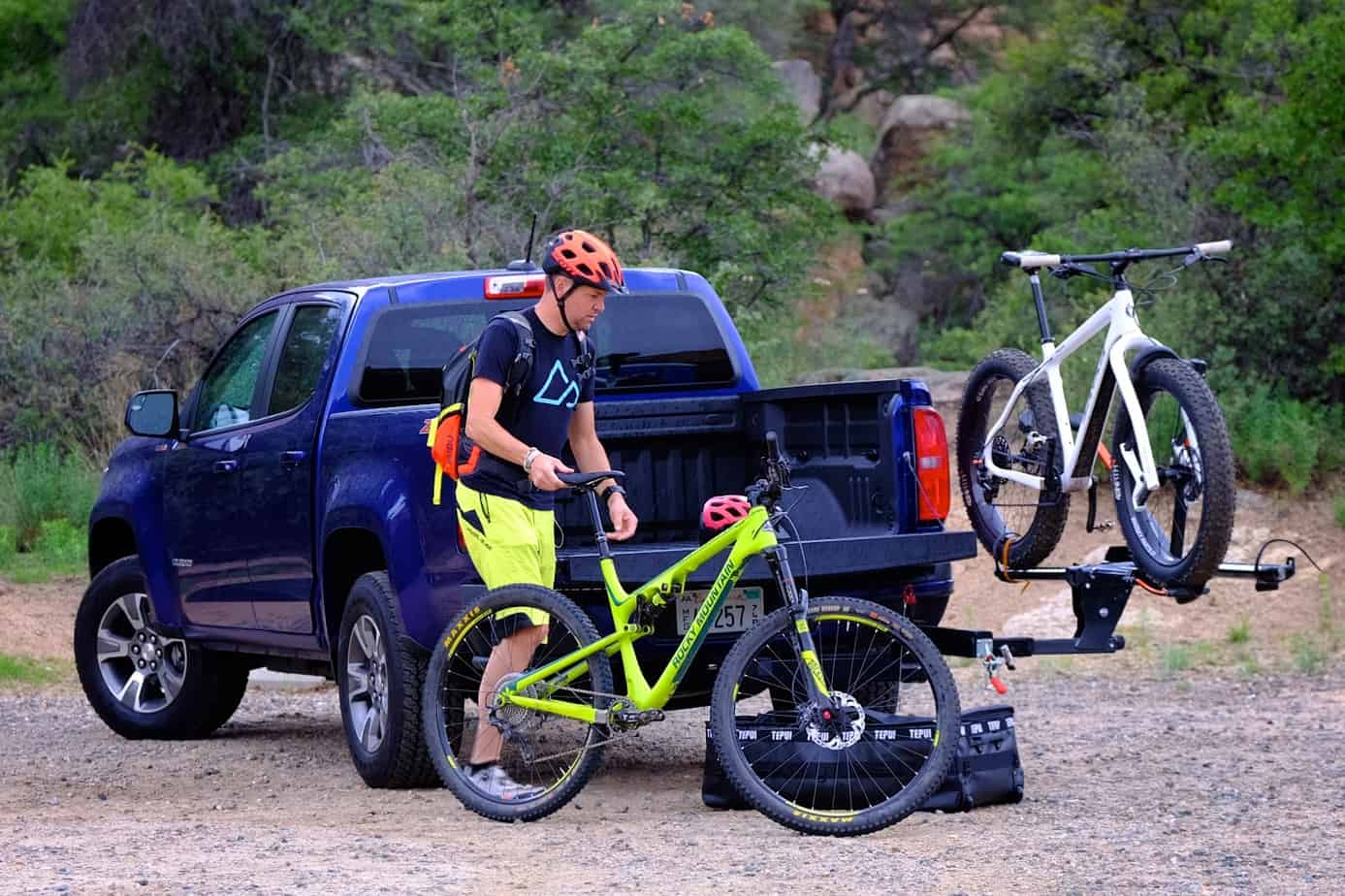 Automotive designers spend millions of dollars designing hatches, tailgates, and rear door systems which most hitch racks render useless. While there are a handful of swing-out bike racks on the market, none are of the tray-mount style, and by virtue of that––stink. The Rak Attach, a beautifully made product designed and built in Utah, solves the dilemma of selecting the best rack for your needs while still retaining access to the aft end of your vehicle.

Available in different sizes to match the host vehicle, the Rak Attach mounts to any standard 2-inch receiver. A locking hitch pin and anti-sway device keep the mount secure and locked in place. To actuate the swing-out, the large security pin must be removed and the cam-tentioned lever released. Once those two components are free, the upper arm rotates effortlessly out of the way. Customers can select to have a Rak Attach built with either left or right facing pivots. I expected some play in the main hinge, but to my surprise, it’s snug as a bug. When returning the rack to the folded position, the upper arm glides smoothly into position, even with the weight of two bikes and a bike rack on the system. Honestly, there’s not much to it, and that might be the best part.

Like everything in life, there are some compromises to be made with this device. It does stick the rack out about 8 inches depending on the model of rack used. For those with spare tires, this is a non issue and Rak Attach can pair a mount to your vehicle to afford the optimal clearance. The unit will also compromise the departure angle for those drivers taking their racks off road. Not a deal breaker, but a consideration. Although I’ve only been using the Rak Attach for the last month, I have to say I love having it. It makes getting to my fridge, and the delicious beers within, easier to get to. That’s reason enough to own a Rak Attach. [Click on the banner below to learn more.] 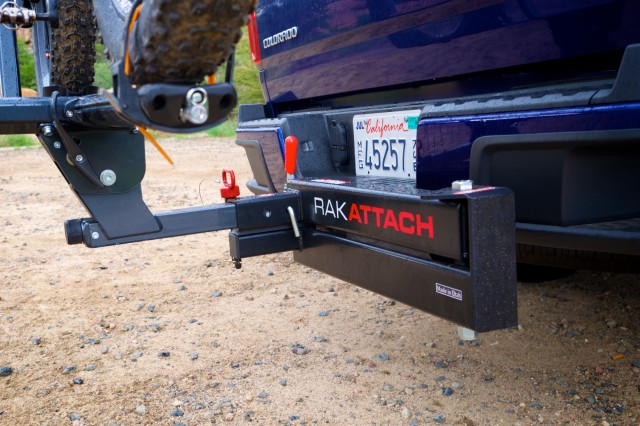 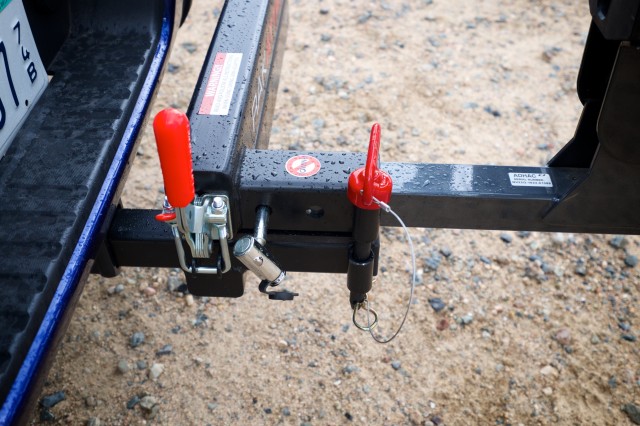 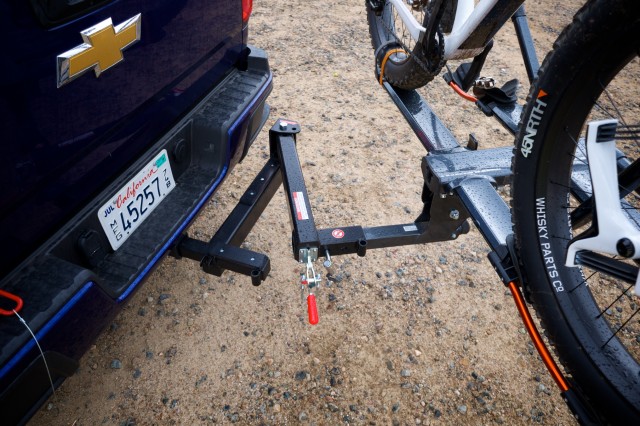 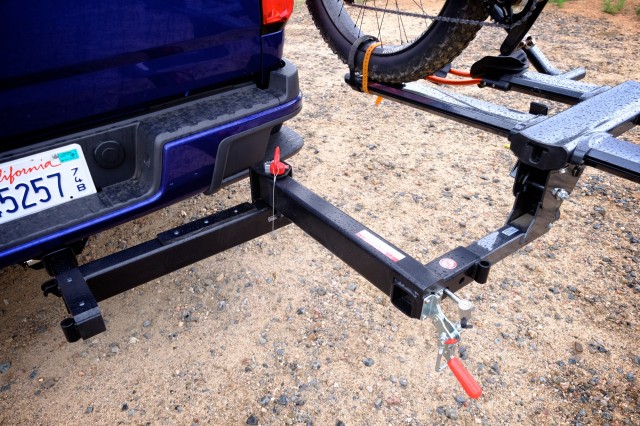 The security pin can be placed at the main pivot to hold the upper arm in the extended position. This is a smart feature as it ensures the heavy rack won’t swing into the vehicle unexpectedly. There’s a lot of weight on that arm, so keeping it under control is a necessary design element. 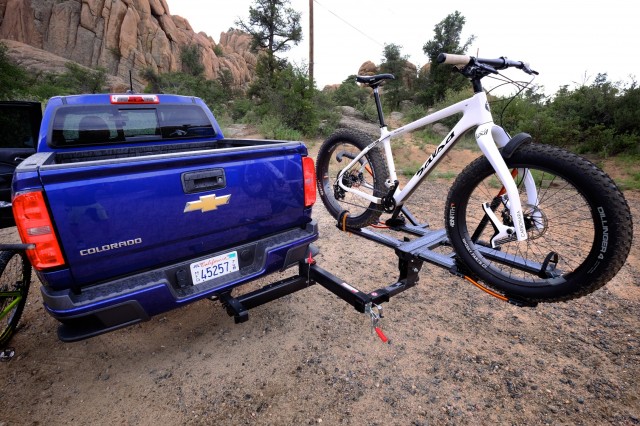