The rivalry for the best big-bore adventure bike has been going on much longer than the name “adventure bike” has been used. Manufacturers vie like hungry children after cupcakes for a morsel of the limelight aimed at BMW’s R 1250 GS. Each has made their play, but the big Bavarian beast still stands, proudly wearing the belt of victory, at least if sales numbers are any indication.

The Competition with the Stiff Upper Lip

Triumph, as a brand, seemed to die in the 1980s until it was resurrected by a visionary named John Bloor; by the early ’90s, a new, more reliable, more powerful breed of British bikes had emerged. In 2006, Triumph eased back into the dirt with the Scrambler, sporting an 865cc parallel-twin based loosely on the TR-6 Steve McQueen rode on his world-famous jump in the movie “The Great Escape.”

Survival in the adventure motorcycle jungle means keeping up with the trends. While the competition has marched on with parallel-, V- and boxer-twins and even Ducati’s incredible 170-horsepower V4, Triumph has stuck with the silky smooth three-cylinder powerplant seen on their 800 and 900 Tigers and the 1200 XC. Three small, high-compression pistons spun the old 1200 XC engine with eerily smooth propulsion and silk-rending, banshee-shrieking horsepower—a stark contrast to the rowdy presence of its two-cylinder counterparts.

But there is a rush in the ADV community to lay down power in a less predictable rhythm. Triumph, at least in the case of the new T-Plane engine in the 2023 Tiger family, has come on board with their version of an engine that not only delivers a more robust sound signature but also pounds power pulses to the ground in a way that works better than the one it replaced.

Other improvements are evident even before throwing a leg over. Cast-aluminum 19-inch front and 18-inch rear wheels differentiate the GT models from their Rally siblings, which have a 21-/18-inch combination set on radial spoke wheels. An adjustable 33.5- to 34.3-inch seat height on the GT (about an inch taller on both Rally models) is almost identical to the BMW, although it feels shorter because of the narrow saddle/fuel tank juncture and lighter weight. Triumph claims the force required to lift the Tiger 1200 off its side stand is 25 percent less than the GS, made easier by the all-aluminum fuel tank and low center of mass. The bike weighs 55 pounds less than the 1200 XC it replaces and a claimed 37 pounds below its BMW counterpart. 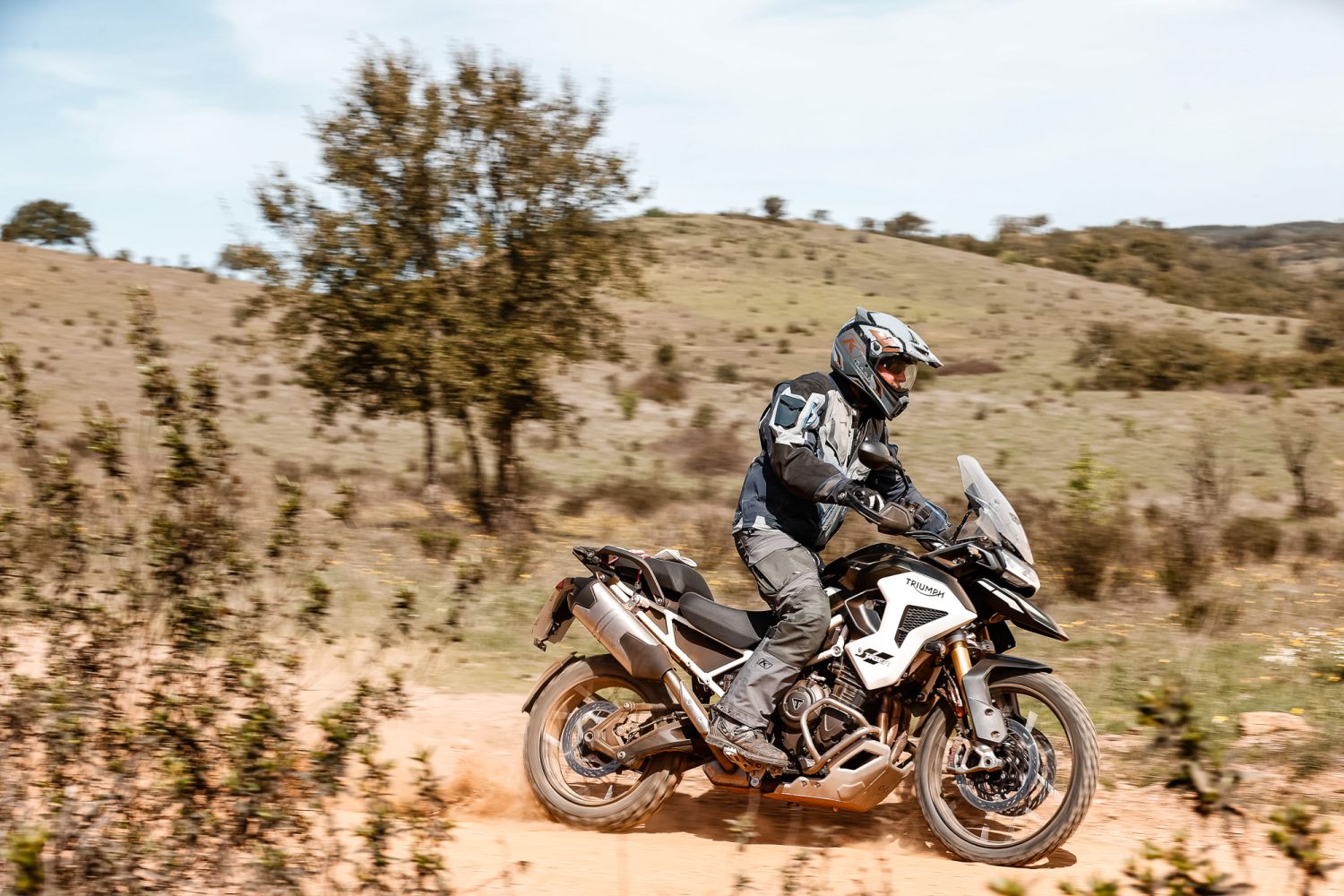 A touch of the starter button makes it clear that beauty is more than skin deep. An unexpected growl replaces the “zzzing” triple riders were accustomed to. Shifting is crisp and smooth, even with the clutchless shift assist, standard on all except for the base GT models. As soon as the clutch is engaged, it is evident that Triumph has increased torque at a lower rpm, though it still takes a touch of caution to make sure it doesn’t stall. As one who lives in the friction zone and loves technical terrain, the engine’s flywheel effect is still subpar for my liking.

Up to six ride modes are easy to select with the five-way joystick on the left switch pod. The Rally Pro and long-range Rally Explorer models add Off-road Pro to the Rain, Road, Sport, Off-road, and Custom Rider modes available on the GT models. Each mode is distinctive, modifying throttle response, ABS, traction control, and Showa semi-active suspension behavior. All 148 horses at 9,000 rpm remain on tap regardless of ride mode, but a definite softening of throttle response is evident when selecting each one. Ninety-five pound-feet of torque at 7,000 rpm turns the crankshaft with authority. Suspension is preset in accordance with ride mode selection. Nine damping options exist within each mode and can be changed on the fly with a touch of the joystick. 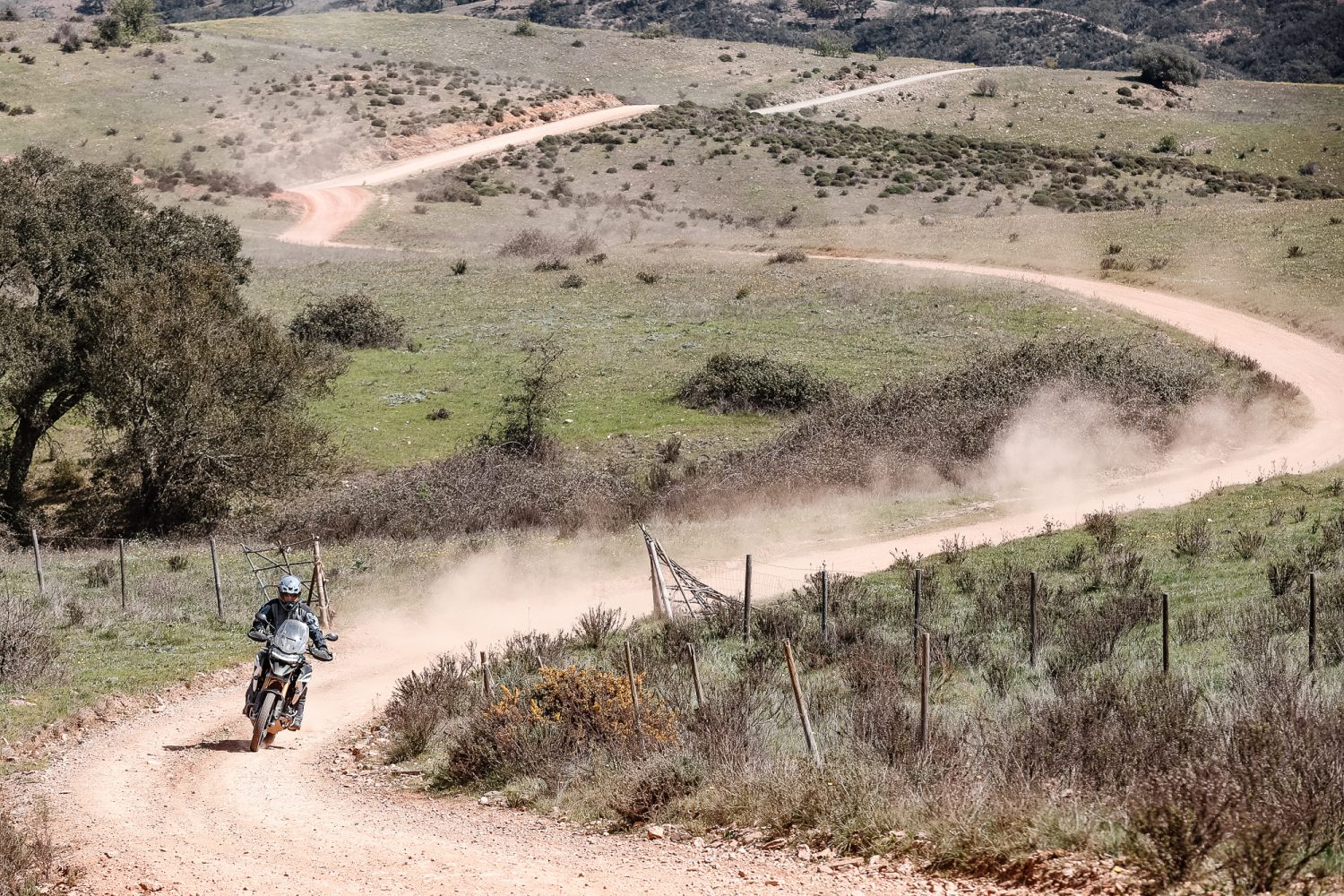 Even if Heaven’s streets are paved with gold, they can’t be much more attractive to a motorcyclist than the roads in southern Portugal, where the launch took place. The Tiger GT gobbled them up with a ferocious appetite. A good, big-bore adventure motorcycle with a seasoned rider can rival a formidable sport bike for its ability to carve turns and spread smiles. The Tiger has all the muscle to take on the best roads anywhere with a lean feel and flickability, and the chassis design conveys confidence. The wheelbase is a tad over 62 inches, roughly two inches longer than my BMW R 1250 GS, and weight bias is a bit forward; hence, it’s a little tougher to wheelie on demand without a slight trouncing of the suspension or a bit of clutch action. But once it’s lofted, hang on. I dragged a few millimeters off the footpeg feelers on the turns and never felt that I was pushing the bike beyond the realm of safety. I would call this a mature-handling, user-friendly machine that compensates to a degree for sloppy rider inputs. I did notice a touch of driveline slack at low speeds between deceleration and roll-on. A little clutch finesse would mitigate the “kerchunk,” but I wondered if this was necessary on such a sophisticated machine. 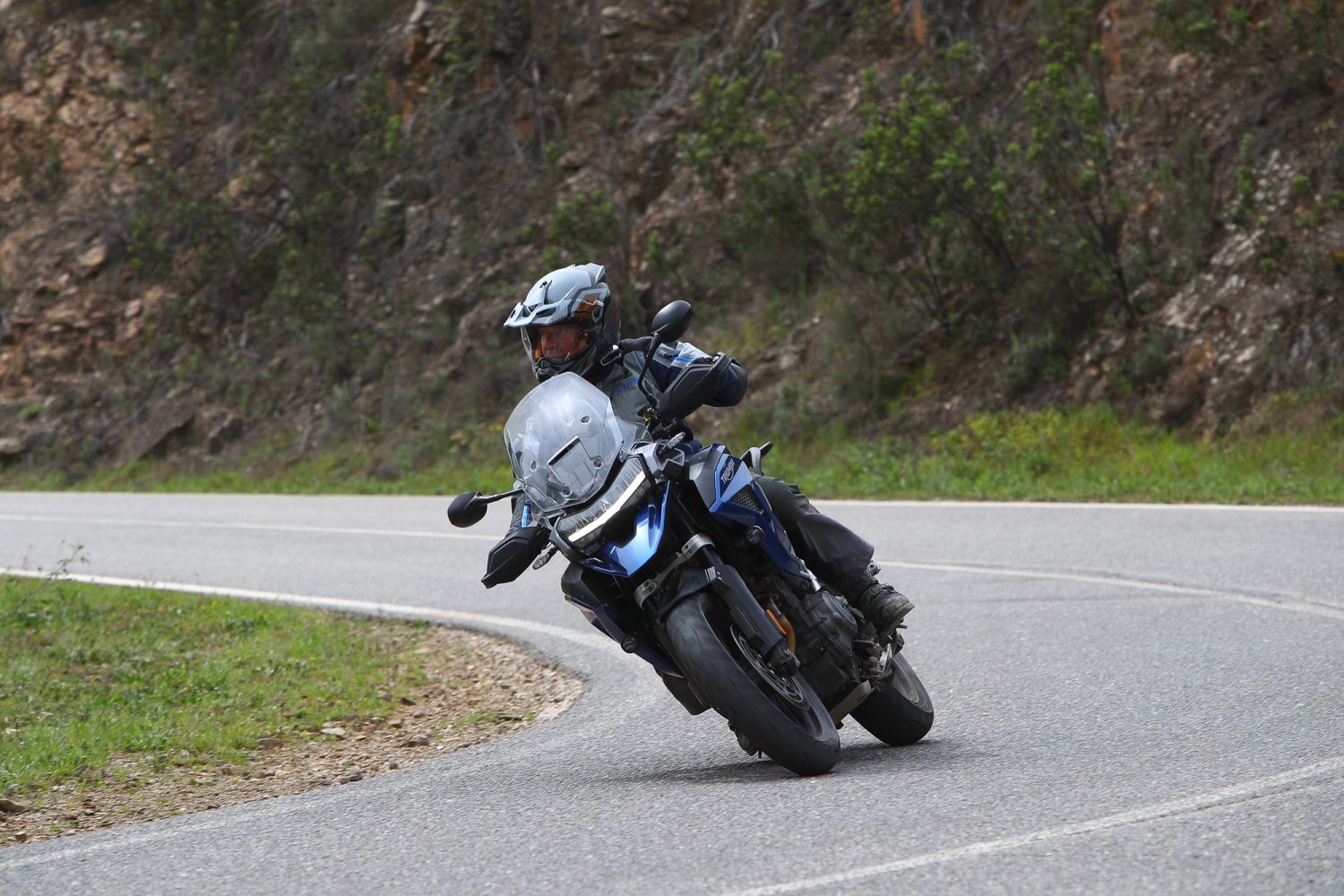 Playing in the Dirt

Off pavement, I typically enjoy challenging technical work on my BMW and leave the faster stuff to the youngsters. The Tiger Rally Pro, however, instantly swiped 20 years from my judgment, and we had a blast. Matt Reed, accomplished enduro racer and chief instructor for Triumph’s training academy, set a brisk pace over the trails. Here the Tiger could really sink its claws into the turf. The off-road experience is enhanced on the Rally models by the 21-inch front wheel and more relaxed steering head angle. I built a custom Off-road Pro riding mode, experimenting with Rain, road mapping, and suspension damping settings from 6 to 9 as our speed and terrain variations increased. Rain was definitely more manageable, but Road allowed me to steer with the rear wheel a tad easier without as much wrist twisting. Off-road Pro and Sport mapping were a bit aggressive for my liking on the sketchy gravel sections. Rear ABS and traction control were nixed in the Off-road Pro mode, which was where I spent most of my time.

I had two near misses when dust and an unexpected tightening of a turn forced me into aggressive action to keep the bike on the road. There was no tendency for the chassis to over-rotate to the low or high sides, and as soon as I added power, the bike followed the front wheel like a lost sheep following its shepherd. It was uncanny how well this 1160cc machine handled in extreme conditions or under the occasional hamfisted rider input.

At ultra-low speeds, the lighter flywheel effect of the triple reared its ugly head again. I mitigated most of the tendency to die when engaging the clutch by carrying a touch of extra power; however, it took a deliberate effort when encountering technical terrain to prevent stalling. 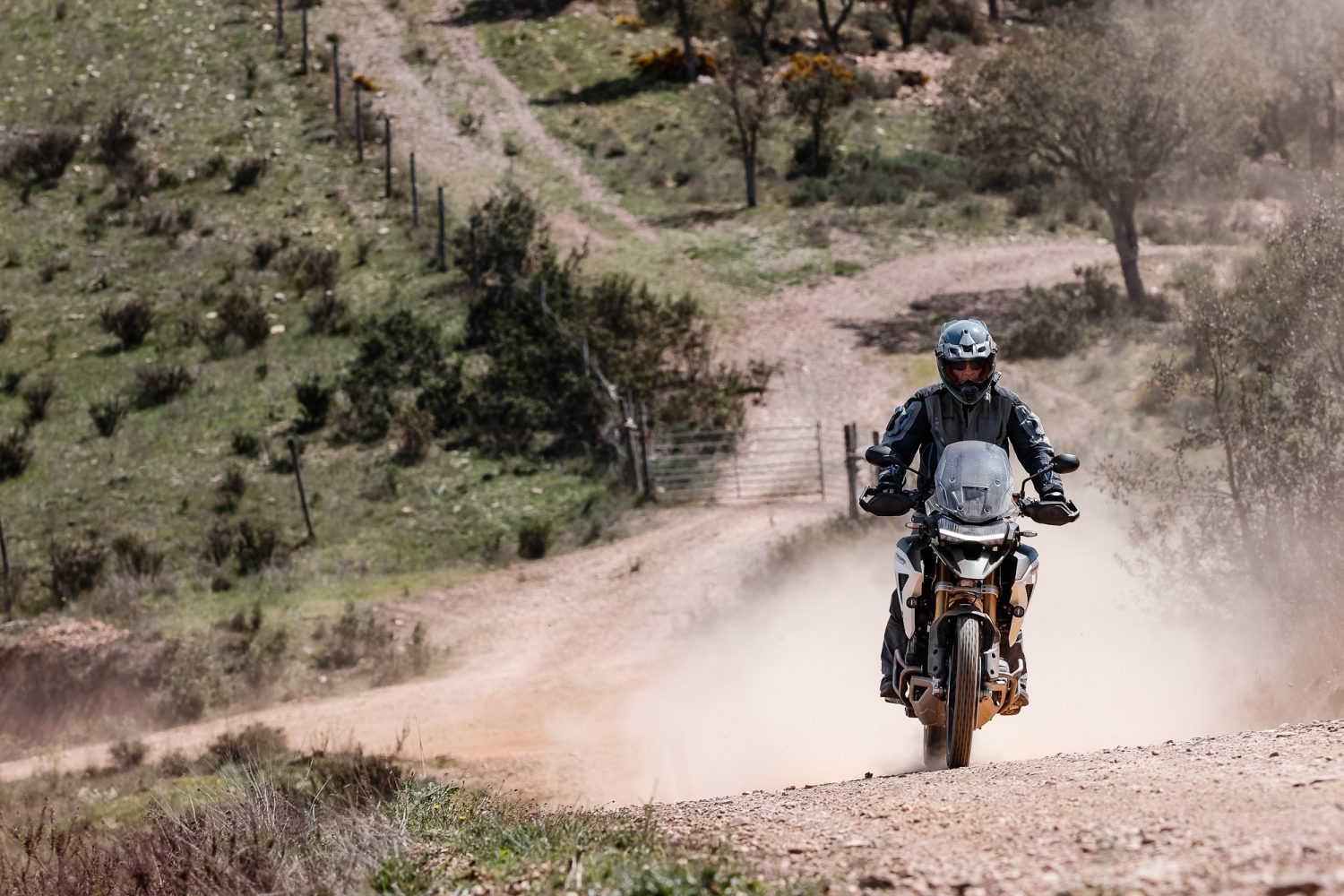 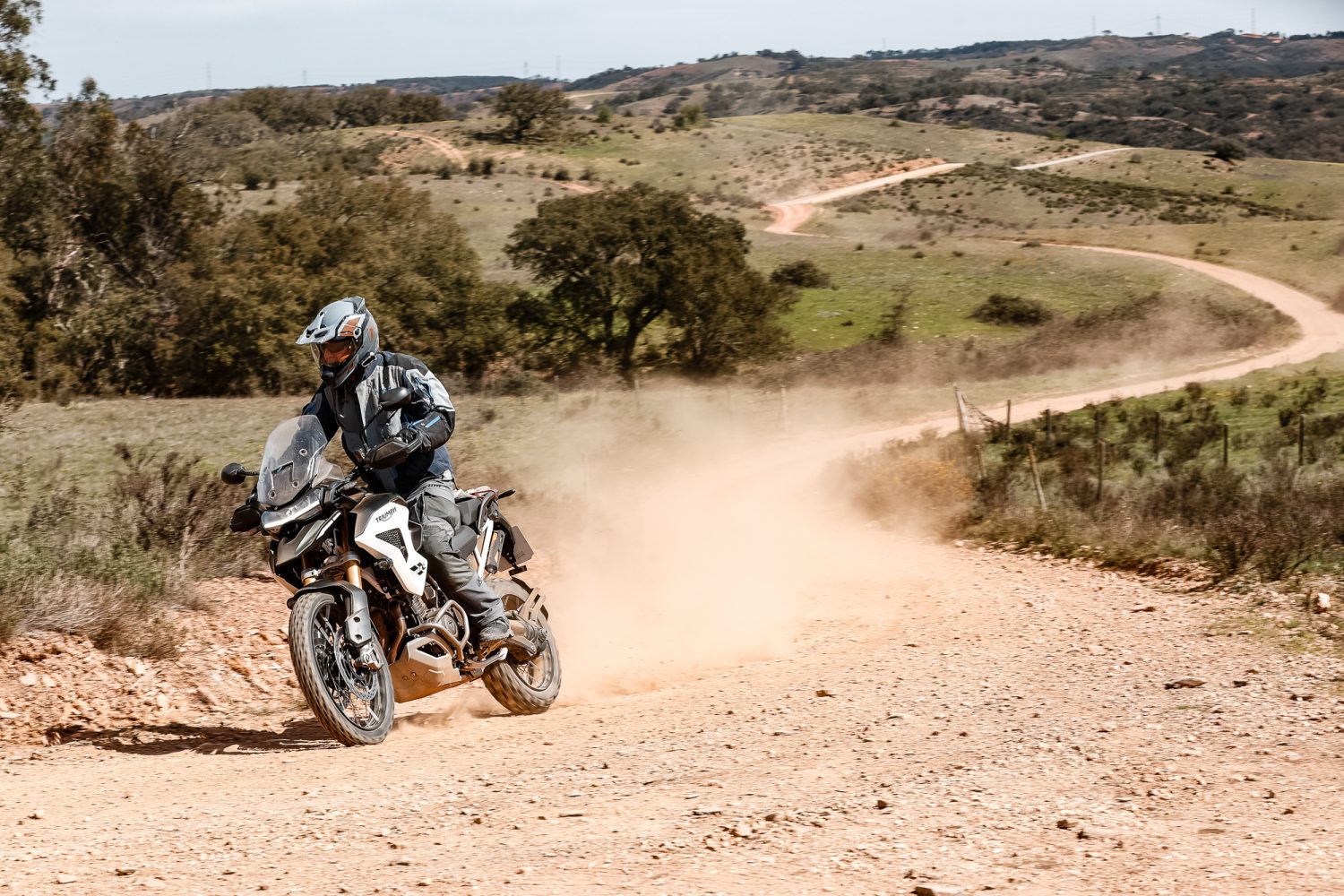 The one-hand-adjustable windshield worked well on the GT on pavement, but grit seemed to have rendered the mechanism balky on the Rally Pro I was riding. Too bad, because otherwise, it only takes a quick pull or push to raise or lower the screen.

As an overlanding mount, suitable for a combination of on- and off-pavement travel, I would say Triumph has hit the mark square in the middle. Power output is more than thrilling, the Showa semi-active suspension adapts to any circumstance, and the relatively light weight and narrow chassis make it a joy to ride in traffic or off-road. With a 10,000-mile service interval and three-year, unlimited mileage warranty, a lot of worry-free overlanding can be done between maintenance sessions. Pricing is still below the BMW, ranging from $19,100 for the standard GT to $24,200 for the top-of-the-line Rally Explorer, and a lot is included as standard equipment with each package.

John Bloor must be proud of the latest Triumph-bred beast prowling the adventure motorcycle kingdom. The big Tiger is back. It’s hungry, and it is coming after the Bavarian king.

Bill Dragoo is the founder of D.A.R.T. (Dragoo Adventure Rider Training), a certified flight instructor, commercial seaplane and sailplane pilot, skydiver, scuba diver, overlander, and adventure journalist. Always game for a challenge, Bill has won numerous competitions in motocross, cross-country mountain biking, and sailboat racing. In 2010 he represented Team USA in BMW’s GS Trophy competition in South Africa, Swaziland, and Mozambique. Bill and his wife, Susan, love to explore the American West and beyond by motorcycle and in their purpose-built Gen 5 Toyota 4 Runner as they research historic trails and traditions. He is quick to tell anyone that the synergy between overlanding, riding, and writing has opened doors he would never have imagined as a younger man.