I’ve never been a fan of rooftop tents, and frankly, I’m still not. Oh they’re an excellent solution in an area where wildlife is a concern, but I’ve always preferred either the stealth afforded by a ground tent or the warmth of a hard-walled camper. I suppose that’s why this review was handed to me—disliking the general concept means I have no bias toward or against any particular manufacturer’s tent.

Tepui is an example of a manufacturer that listens: they’ve done a great job accepting customer feedback over the years, and answering that feedback with a continually improving product line. The Kukenam XL Ruggedized is one such creation, its feature list reads like the wishlist from a certain forum thread. If my feelings on the matter of roof tents ever change the Ruggedized line of Tepui tents will be on my short list. 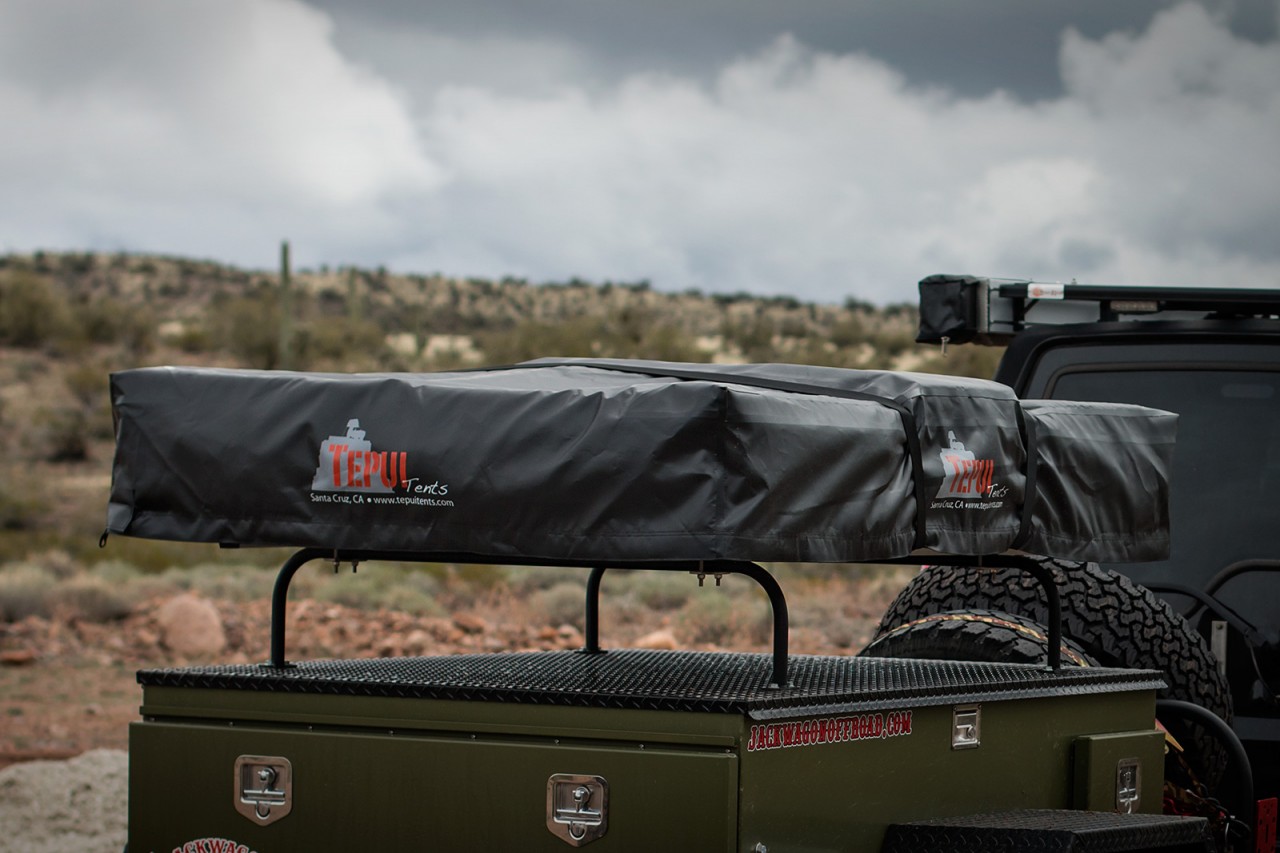 The Kukenam XL Ruggedized is no lightweight. It’s a massive tent that weighs in at over 200 pounds (with annex) and provides more than fifty square feet of sleeping space when open. Even closed, the tent’s sizable 76″ x 48″ x 12″ bulk has a staggering presence, and it looks right at home on a large overland vehicle or trailer. 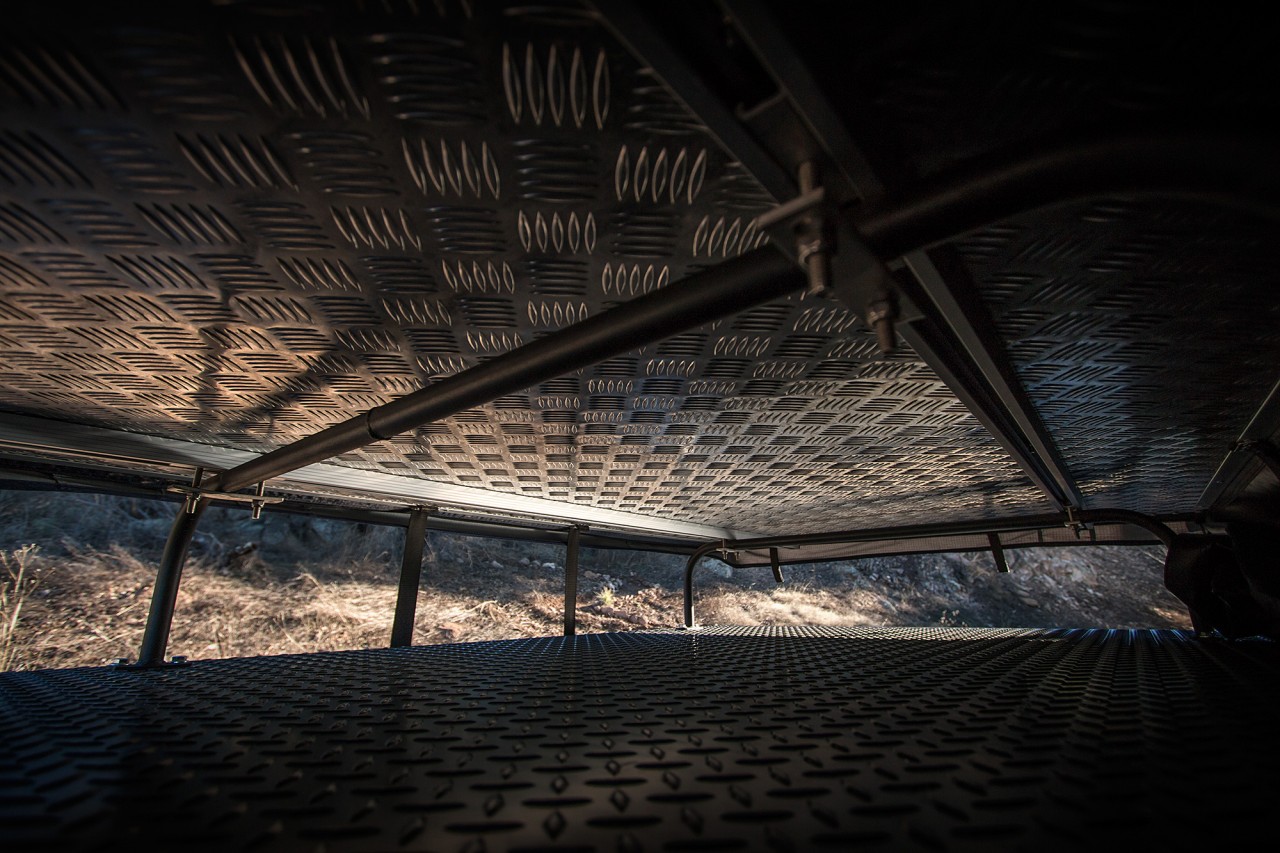 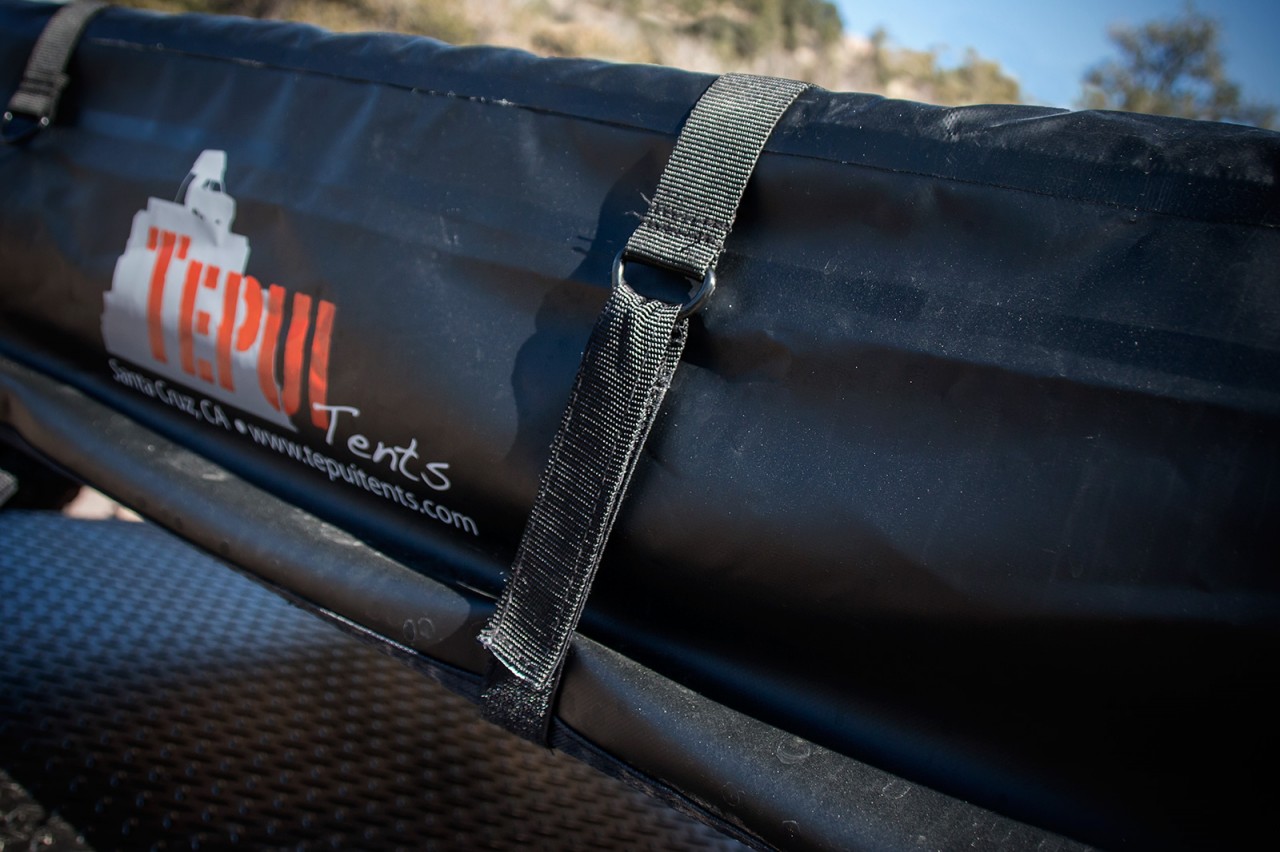 The first thing to catch my eye when we sliced open the box was the Kukenam XL’s shiny metal floor. Most manufacturers use wood here, and though I’ve never seen wood become a problem it’s nice to see the added durability of aluminum finding it’s way onto roof tents. D-rings are present at each corner of the aluminum floor and make a great place to hang lanterns or muddy boots in camp.

The next thing I noticed was the sharp looking black transit cover. Tepui included generously sized Velcro corners to ease zipping and unzipping of the cover, which double as a catch to keep the zipper pull tidily tucked away while on the road. The zipper is heavy duty, but it would have been nice to see a ratchet-and-strap method used for securing the cover (in fairness, most manufacturers use zippers here). 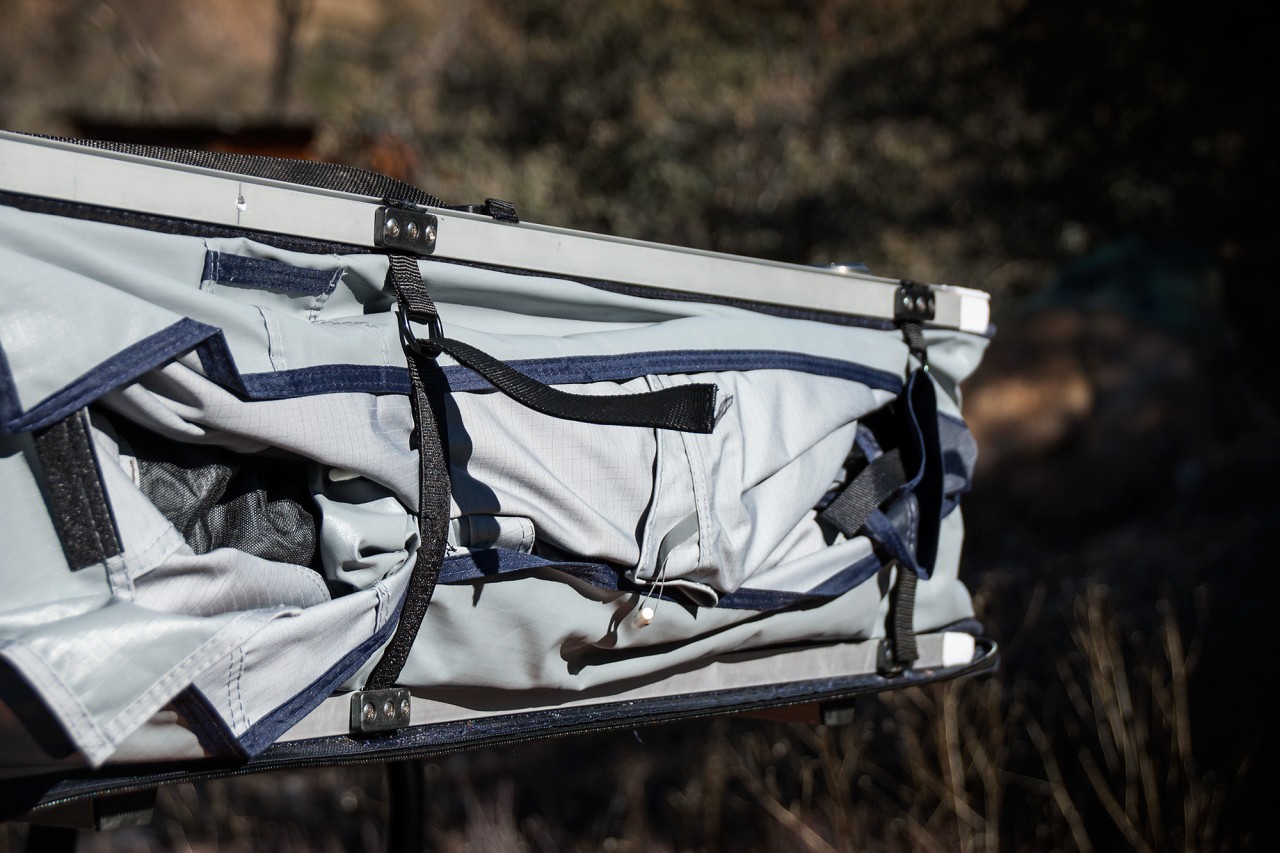 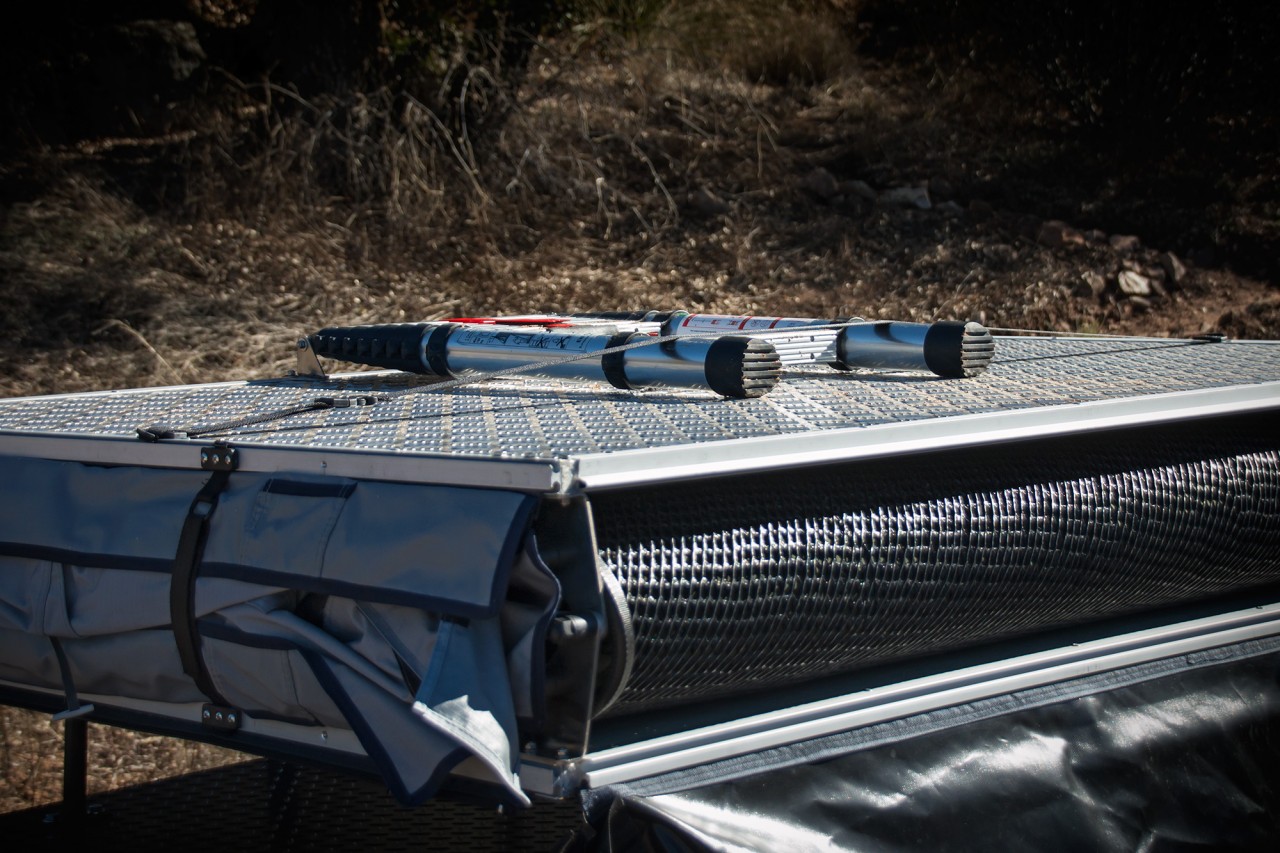 Removing the cover reveals not two, but four compression straps securing the clamshell shut. Enough space is provided to keep bedding in the tent when folded up. An additional strap runs down the center of the folded tent to keep the ladder from bouncing around on the trail. A half-inch anti-condensation mat is included and does an excellent job keeping the underside of the mattress dry even in foul weather. 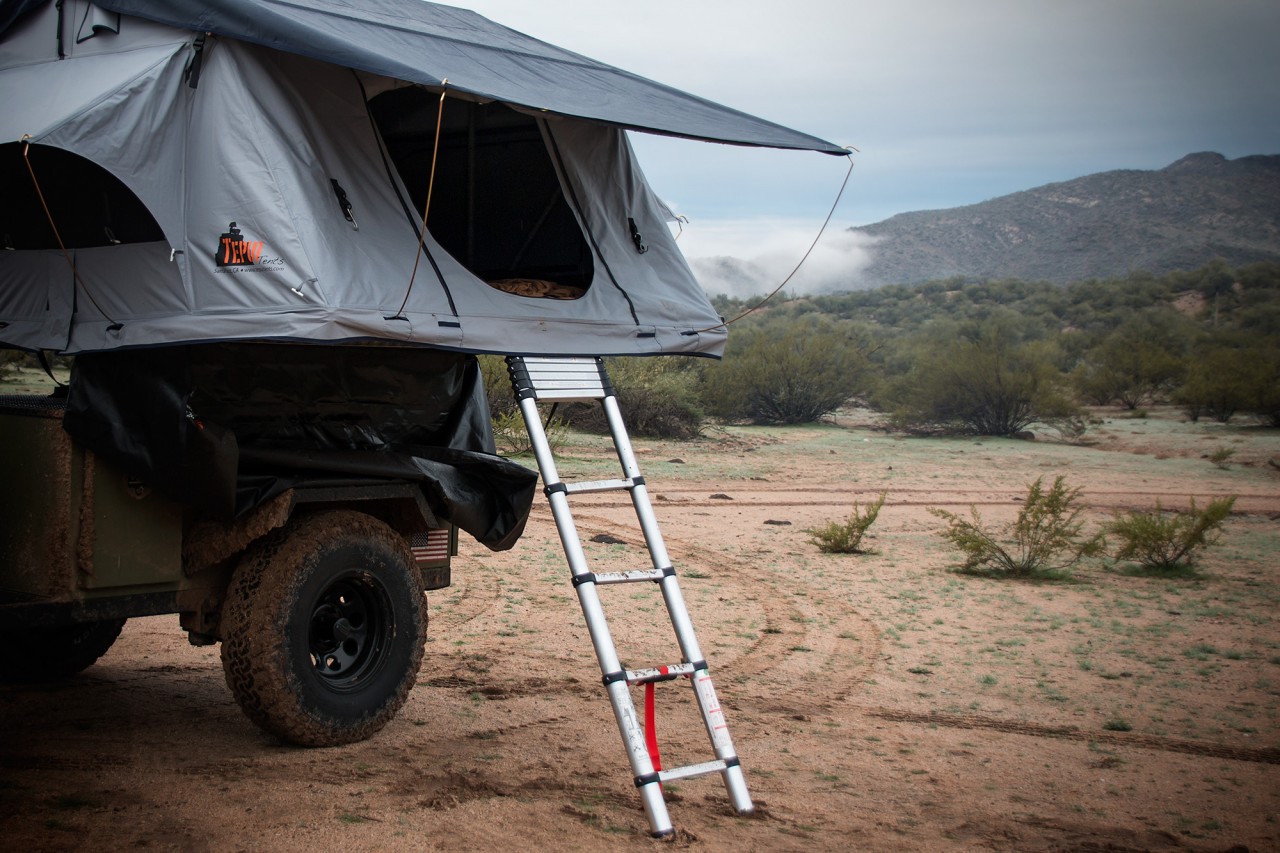 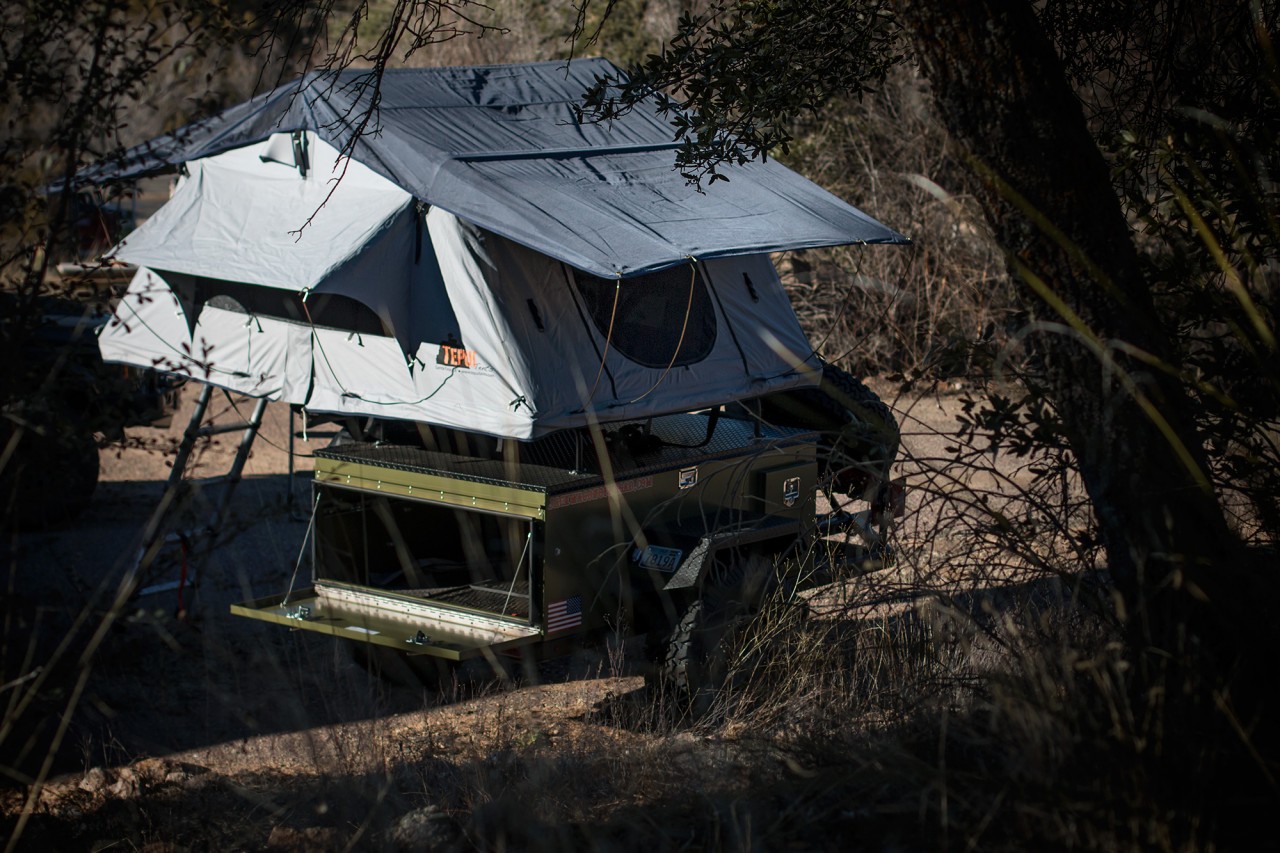 Setting up the Kukenam XL goes as quickly and as easily as can be expected with a tent this large: extend the ladder, use it as leverage to flip the tent over, secure the ladder, then place all twelve of the support rods. Total setup can be done by one person in under five minutes. The extra four support rods add welcome additional support to the rainfly against wind, and help guide runoff away from the doors. Setting up the ladder takes a little practice to get perfect, but it’s extremely sturdy, provides a sure-footed grip, and extends to a generous 8.5 feet.

Tear-down takes a bit more effort and a little more time since there’s so much air to evacuate and so much fabric to tuck into the folded frame—it’s simply the price one pays for this much sleeping space. The process is basically a reverse of setup, and can be handled by one person in well under ten minutes. 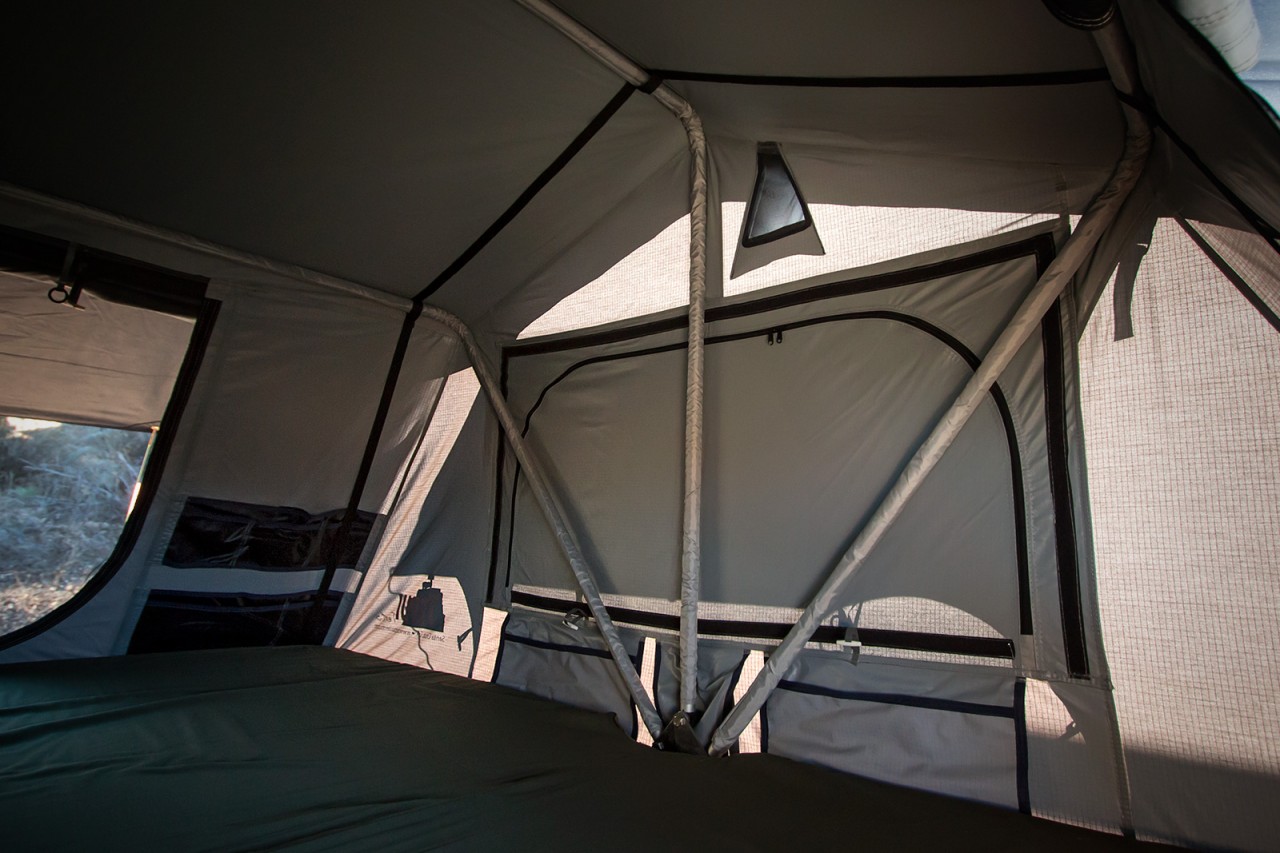 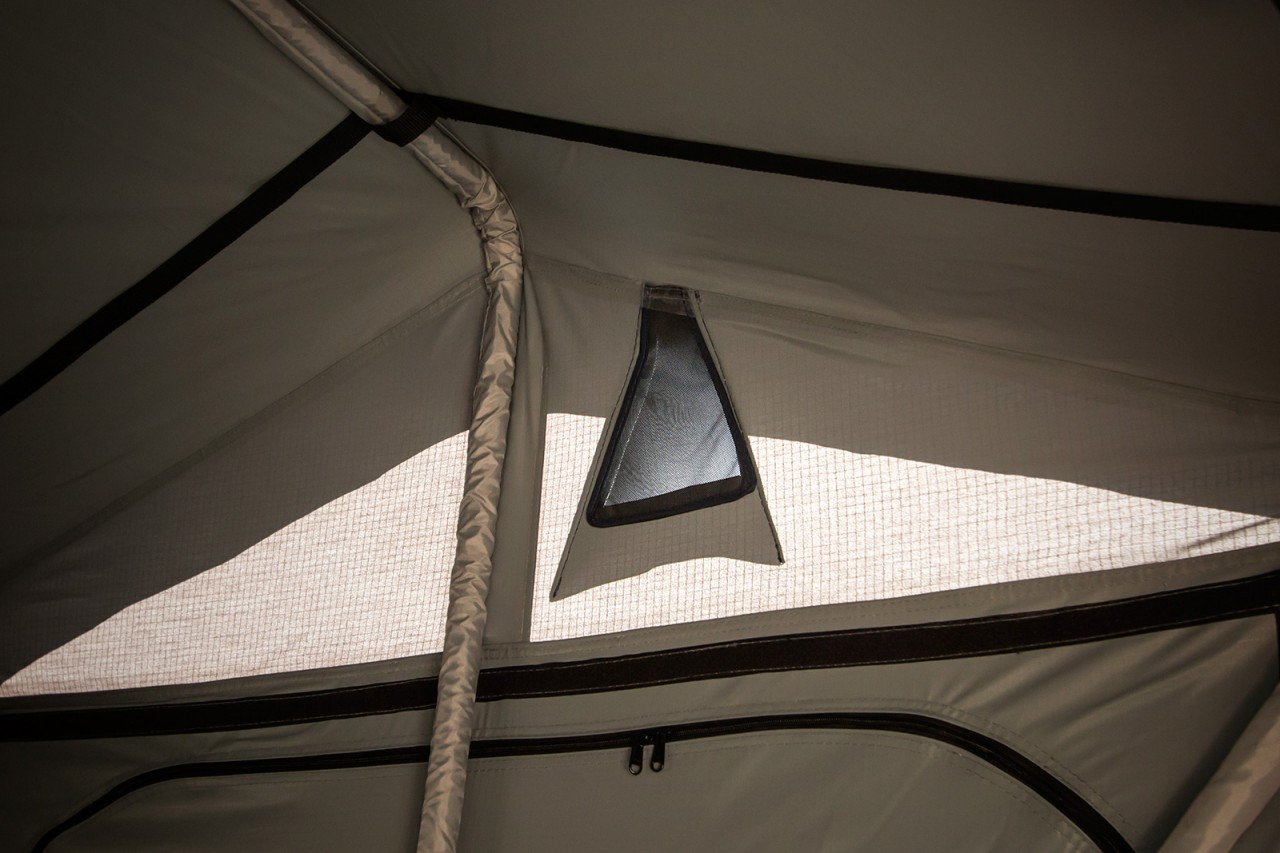 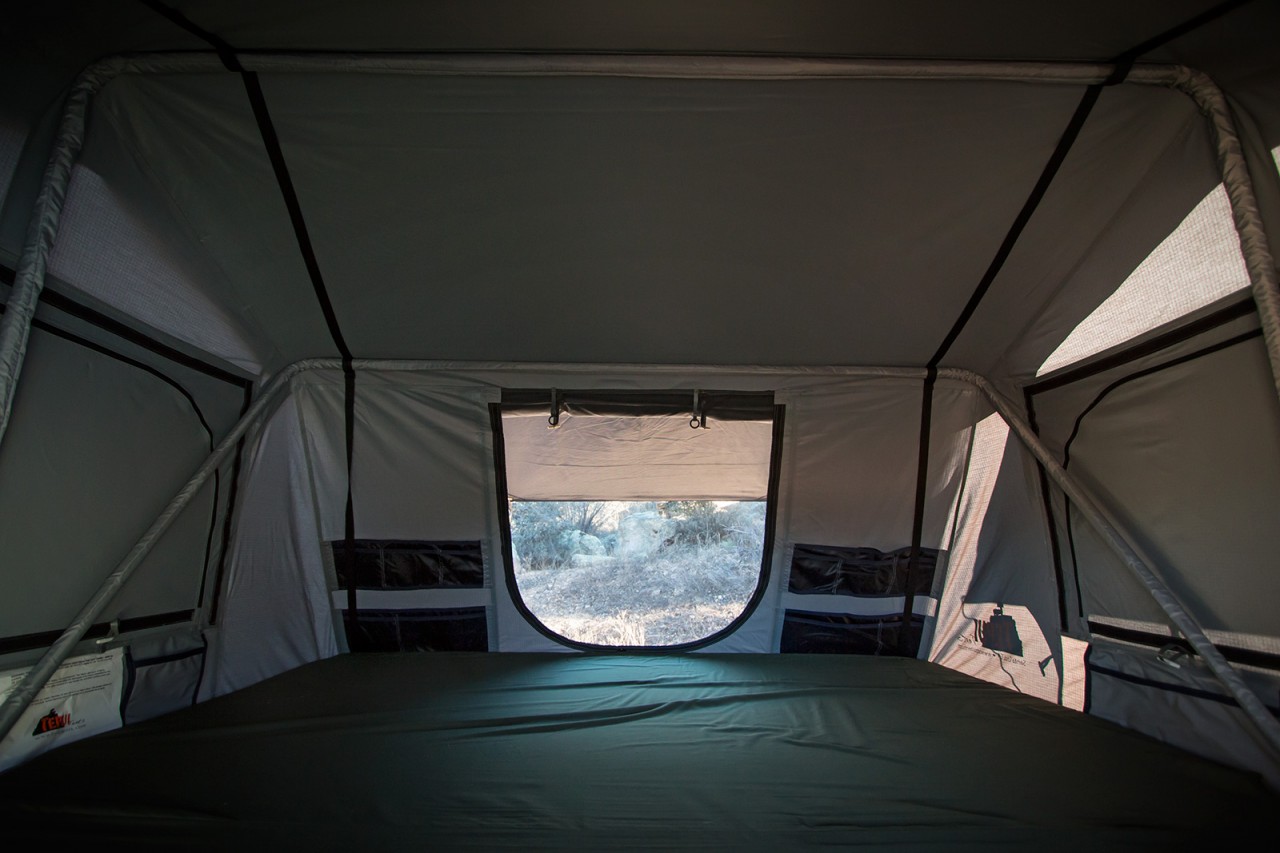 Climbing up the ladder to enter the tent there’s a triple set of loops on either side of each door, perfect for keeping a flashlight and slippers handy for the inevitable 4am nature call. Moving inside the cavernous tent reveals pockets, and pockets, and pockets. There are so many pockets on the walls of this tent that even the pockets have pockets—my nightstand at home isn’t this organized. The pockets on the sides are spread wide and low to leave plenty of space for the large windows, while the pockets at the ends are stacked two rows high and feature a pass-thru behind them for storing longer gear.

The mattress is thick and comfortable, and the walls thick enough to maintain a reasonably comfortable temperature with two people on a 30°F night. While staring up from the mattress I noticed another nifty feature: integrated air vents near the top of both side walls. While they don’t completely eliminate condensation inside the tent, they do keep it controlled enough to keep the doors and windows fully closed during a storm. 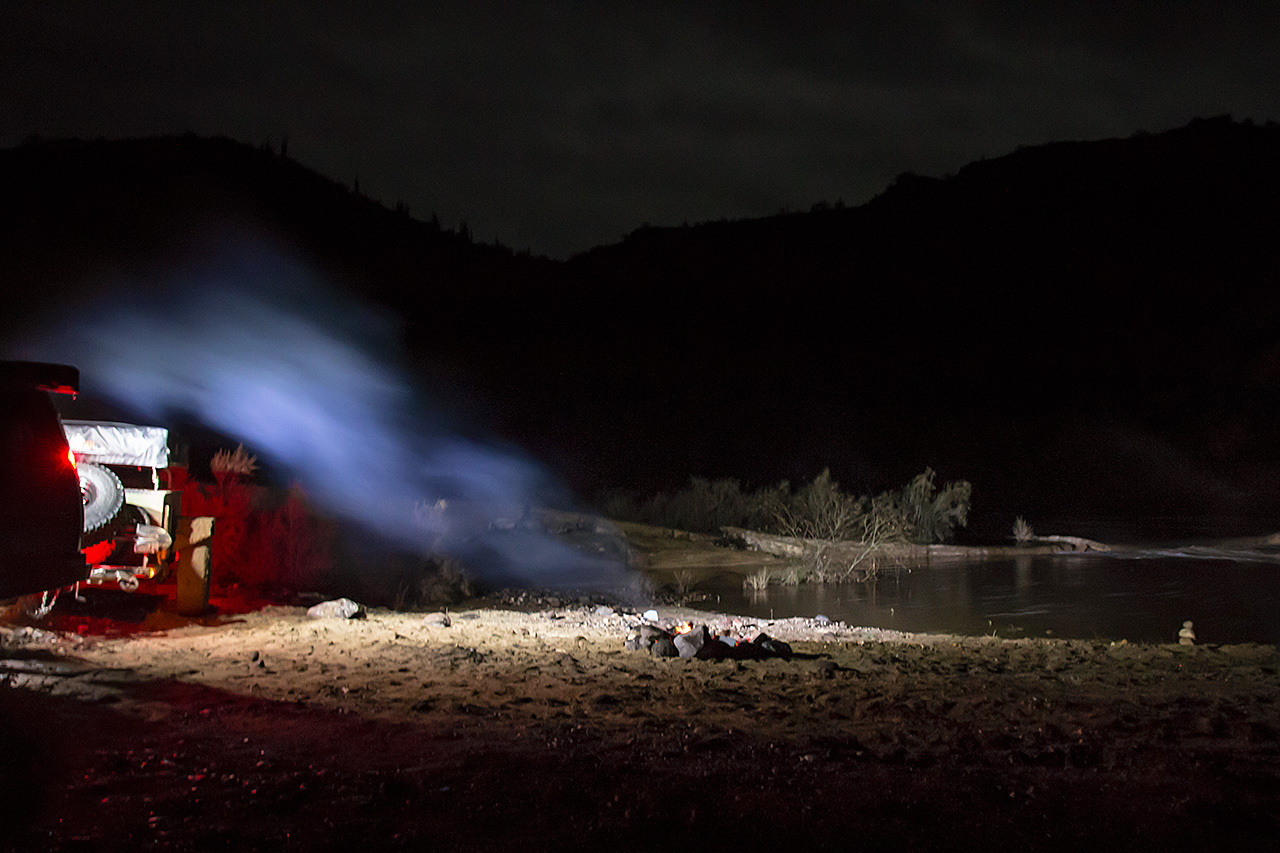 We could not have asked for better testing conditions during our evaluation: it rained the entire weekend, so much we had to move our camp due to flooding. With so much rain and temperatures dipping below freezing we were able to fully evaluate the potential for leaks and condensation issues: there were none. Even after hurriedly folding the tent up in the rain, moving camp, and setting back up the interior remained dry and we slept comfortably through the night. 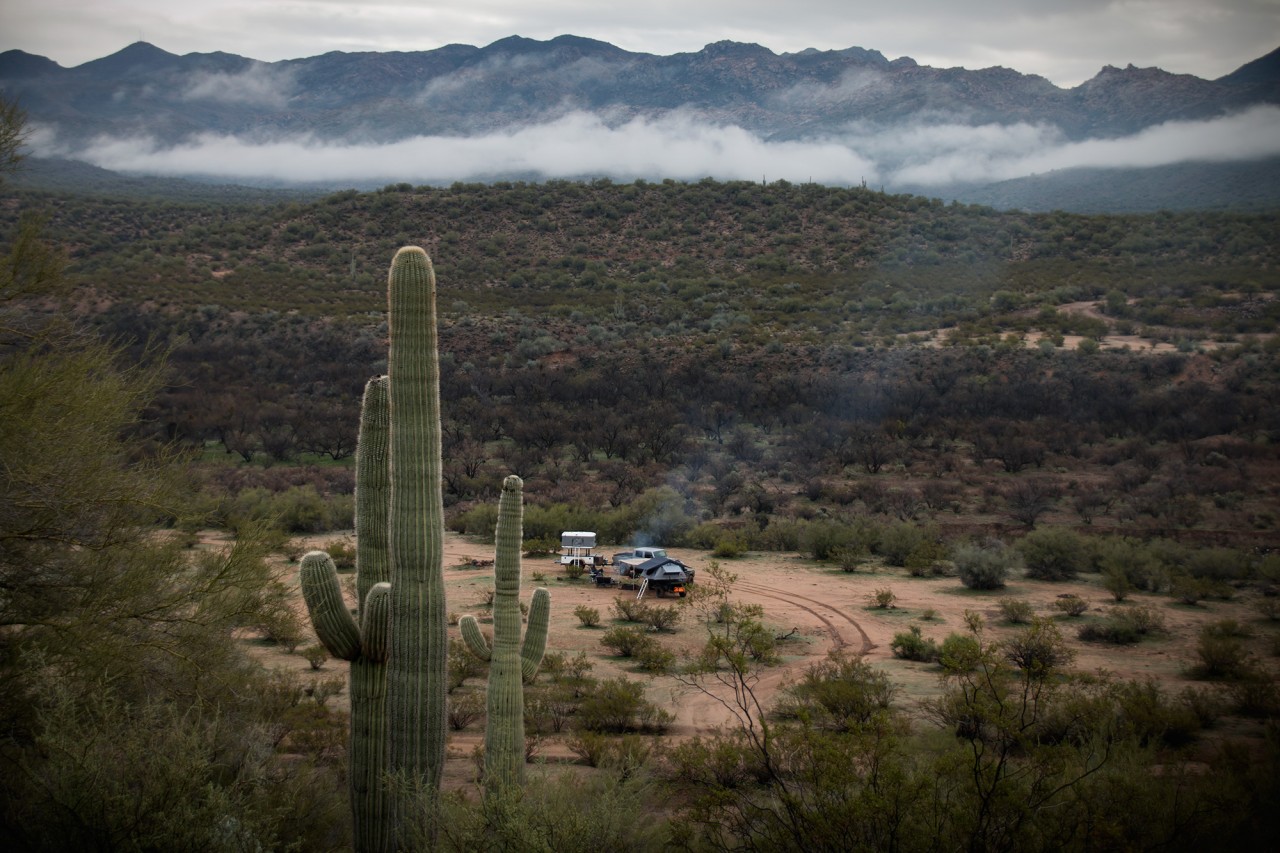 More information and full specifications on the Kukenam XL Ruggedized, and Tepui’s other tents and accessories, can be found on the Tepui website. 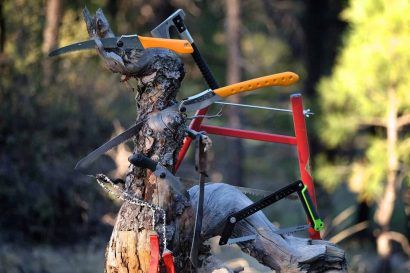 Cut it Out: The Hand Saw Shootout 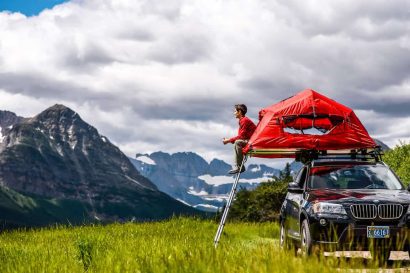 Yakima Announces SkyRise, Their Entry into the RTT Market 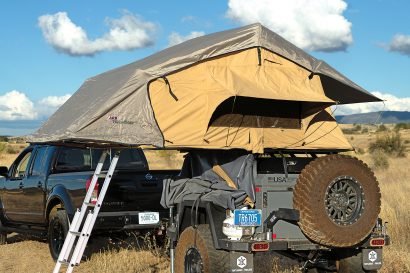