With the dusty days of summer inbound, chain lubrication should be at the top of every rider’s motorcycle maintenance list. In fact, some experts say motorcycle chains should be lubricated every 300-600 miles, though this is debatable and depends on riding conditions.

Why Do I Need To Lubricate My Chain?

Lubrication will increase the longevity of your chain and sprockets, along with ensuring better overall performance. A properly oiled chain will have far less stretch and, therefore, noise. You’ll also need fewer tension adjustments.

What If I Slack Off On Oiling My Chain?

If you’re content listening to the ear-piercing squeal that comes from a non-lubricated chain, then you have more patience than I (or a baby at home, and you’re desensitized to noise). Aside from being annoying, a dry chain can rust and break, with the potential to destroy your engine. Below is a photo of my worn-out chain when I couldn’t find parts in South America. I rode stressed out that the chain would eventually slip off that shady-looking sprocket. 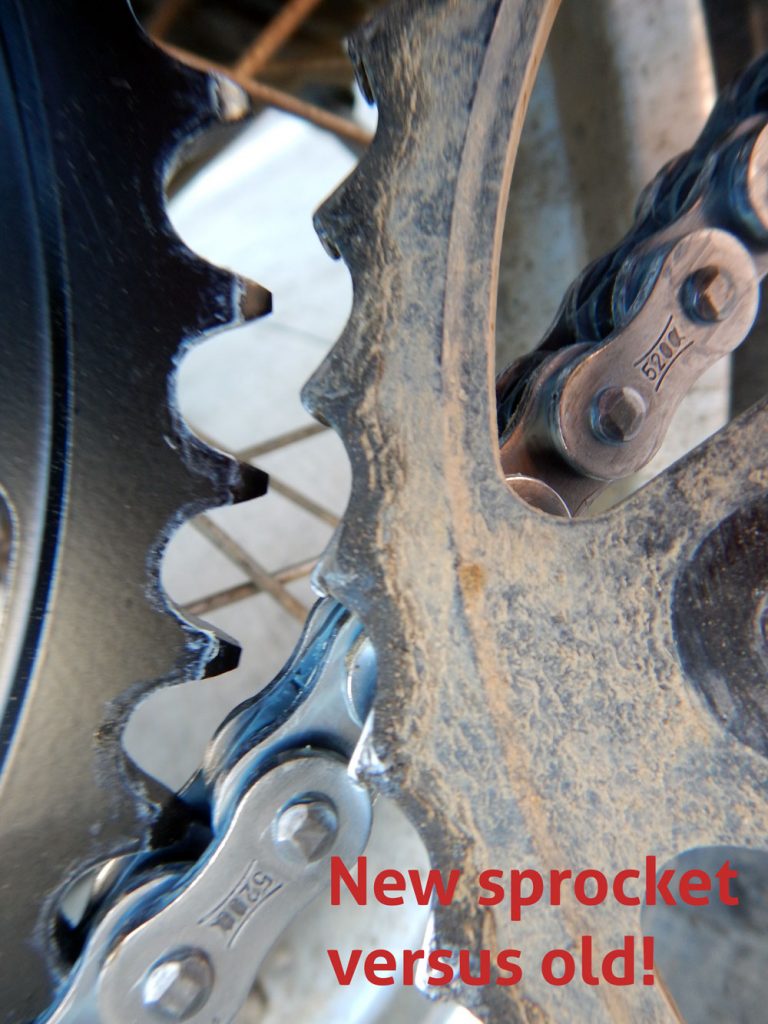 But Oil Picks Up Dirt!

True. One problem with chain oil is it’s sticky, like a mix between honey and tree sap, in order to stay on the chain and not just get flung off. But tackiness also means the oil picks up dirt and other abrasive particles from roads and trails, which create almost tar-like globs on your chain, wearing down parts much faster. 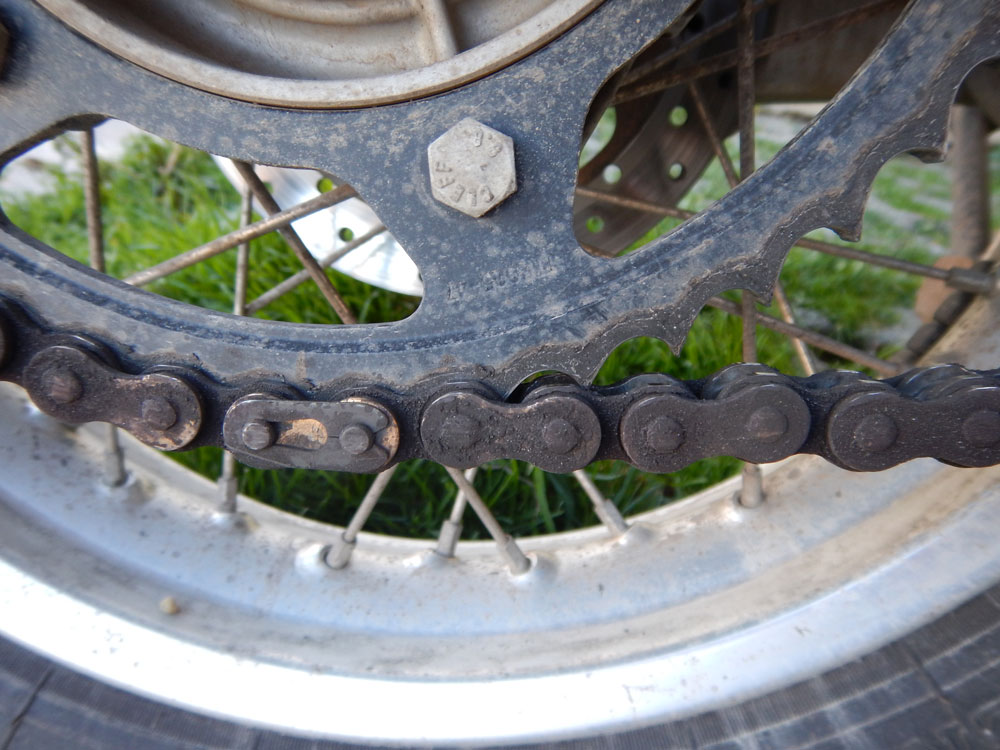 How Does The Scottoiler Work?

Depending on which of the three oilers you choose, you’ll either have a vacuum- or electronically pumped system with a reservoir installed on the frame of your bike, under the seat, or, as with the system v3.1, between your handlebars. The reservoir pumps oil through a tube that regularly and automatically drips small drops onto your chain.

You can choose the frequency. One drip per minute is recommended, although some find this excessive and prone to splatter. Drips only happen while riding, so you won’t wake up to a mess under your bike in the morning.

The reservoir can hold 1,000 miles worth of oil (approximately 70 milliliters) at the flow rate of one drop per minute. If you want a longer range, you can upgrade to the Touring Reservoir, though I could not find this on their US website. 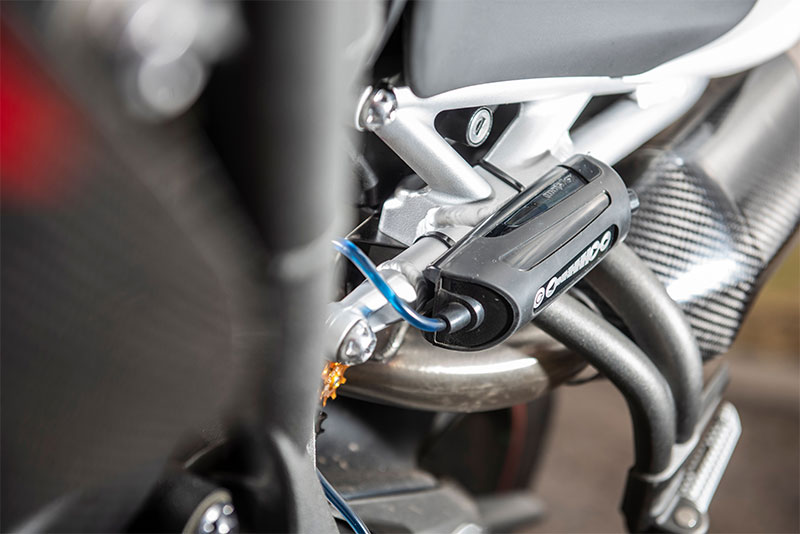 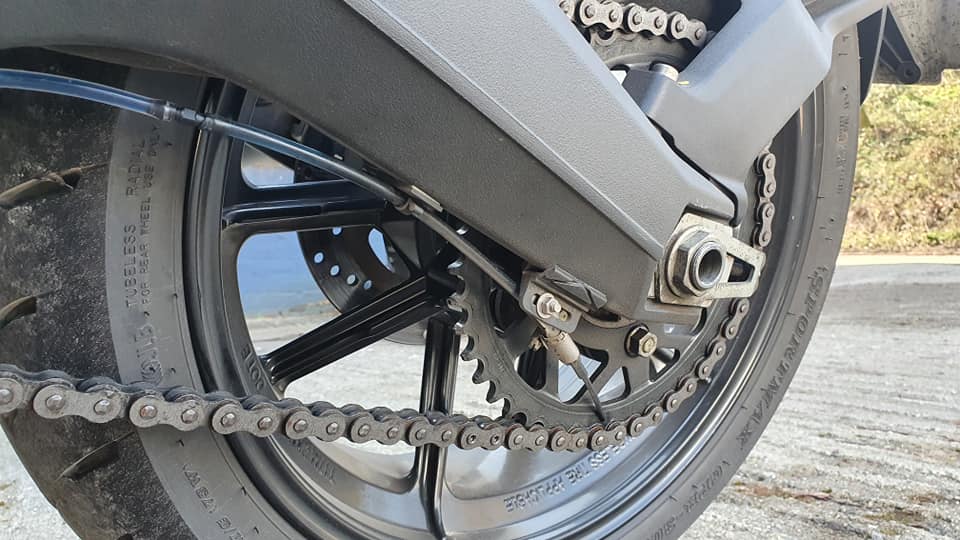 Here’s another video from Twisted Throttle showing more about installation and use.

There is much debate over using automatic chain oilers versus manually doing it yourself and even more opinions about what oil to use for motorcycle chains. Some riders liken chain oil to fine wine and can go on for hours about the nuances of quality lube. As always, it’s a personal choice. But your decision between the two options might be swayed by a few considerations such as how often do you ride and where, and are you on dirt the majority of the time or pavement? Do you plan mostly weekend trips, or are you about to embark on an unsupported adventure?

Because of the drip rate, oil used in the Scottoiler doesn’t need to contain as much tack additives, which means your chain picks up less grit. Scottoiler claims chains will last up to seven times longer using their auto-oiler. 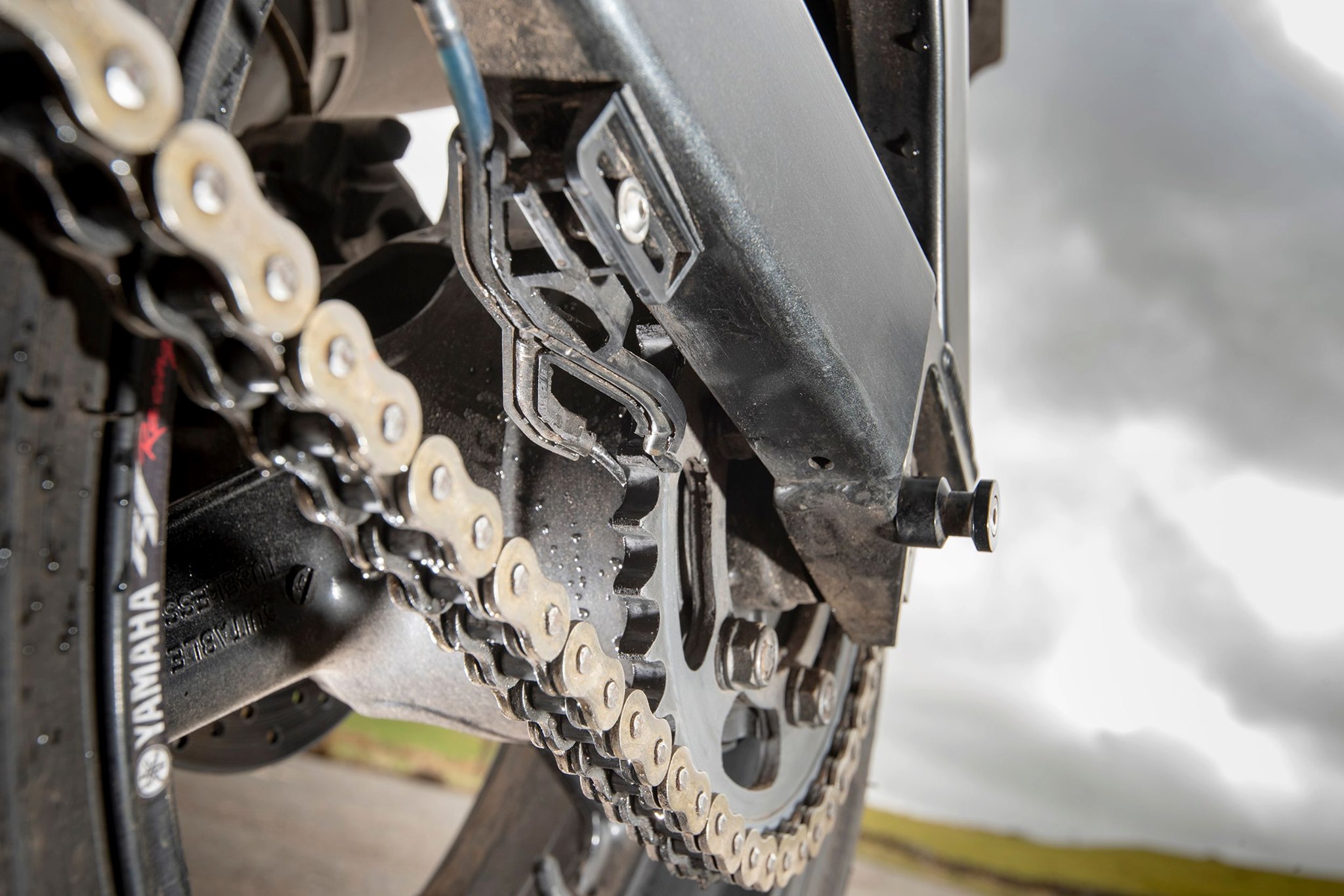 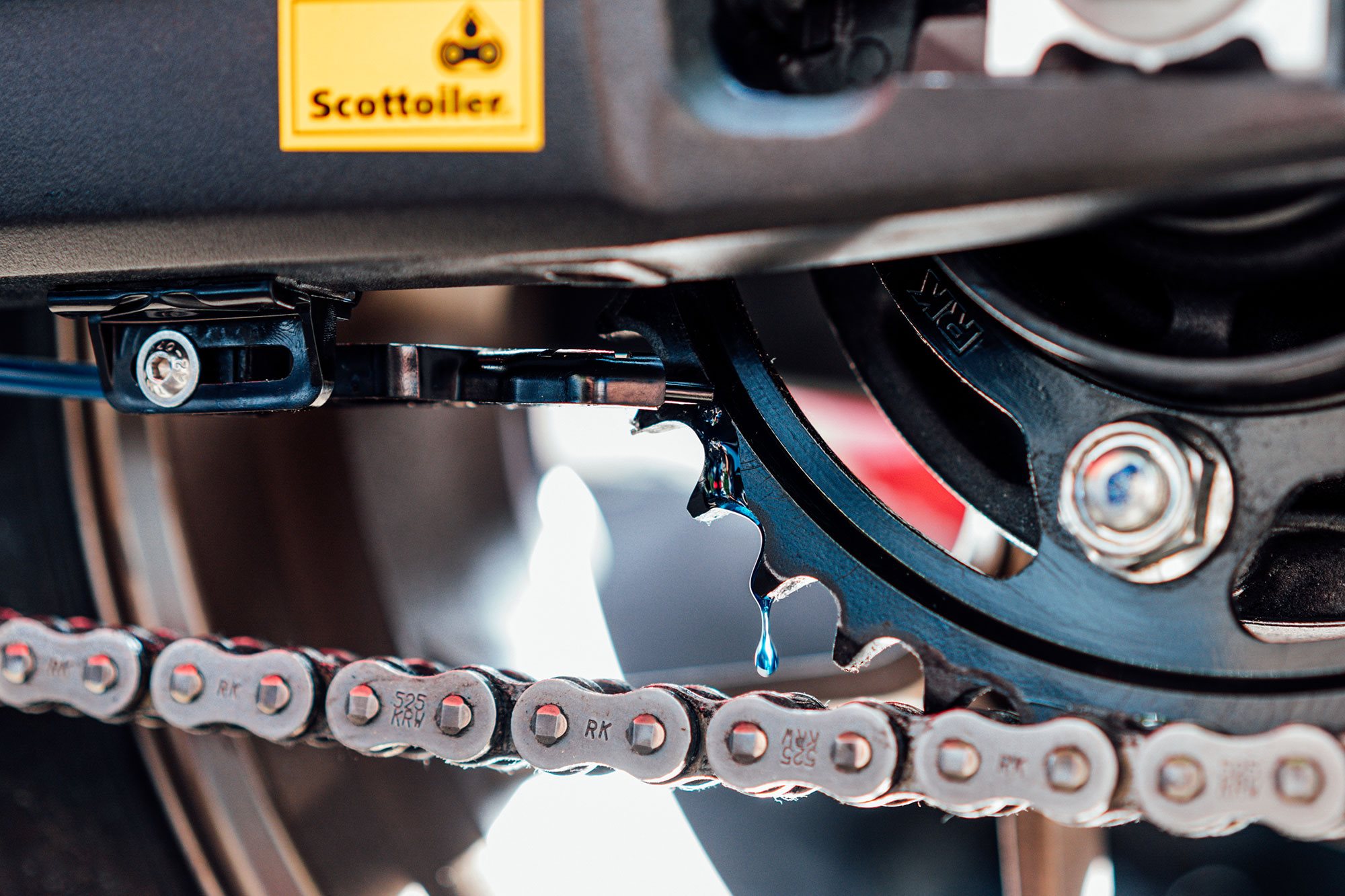 One major reason my husband, Dave, and I chose Scottoilers for our GS bikes was convenience. In 2015, we planned to ride around the world through 40 countries. If it’s true that chains need lube every 300-600 miles, then, without an auto-oiler, we’d be greasing up manually every day. This was too time-consuming, and there was no way we wanted to, or even could, carry that much lubricant with us.

That said, I held off on getting a Scottoiler. I’m frugal, so I didn’t put one on the bike I used for the first half of our trip—a G 650 GS. Dave, on the other hand, added a Scottoiler V-system to his F 800 GSA from day one. Within a year, and 35,000 miles later, I was on my second set of chain and sprockets while Dave was still cruising on what he set out with. Thinking the only reason my parts were wearing out faster than his was because he had an auto-oiler, I added one when I swapped my G 650 GS for an F 800 GS—new bike, new chain and sprockets, new auto-lube system, but…

By the end of our travels, only one of us still had the Scottoiler while the other switched back to manual lubrication.

Why Dave Stuck With The Scottoiler

To this day, Dave still has the Scottoiler on his GSA, even after using it for more than 55,000 miles. The mechanism has lasted without issue. He appreciates not having to think about lubrication or finding and carrying the oil he likes. He’s also never experienced problems with the oiler off pavement, which is a common complaint from other riders using auto-oilers.

Why Heather Did Not Stick With The Scottoiler

For the second half of our travels, I had two Scottoilers installed on my F 800. The first kit wouldn’t modulate and either dripped too much oil or none at all. We tried recalibrating the regularity, but I’d either be out of oil by the end of the day or not a drop had dripped. Thinking it was a problem within the unit itself, Scottoiler replaced the one I had and oversaw the install of a new V-system oiler. Everything worked fine for a while, but then I had the same issue, and the outcome was more dire. The reservoir leaked oil onto the slave cylinder for my Magura clutch, which attracted grit and prematurely wore out a seal leading to clutch failure. I continued the rest of my travels—several thousand miles—without the auto-oiler. Sadly, I was back to applying oil myself, which I’d sometimes forget to do, and my chain wore out far too soon. Now, in just over 700 days of riding over 55,000 miles, I’d replaced chains and sprockets three times to Dave’s one. This was not only expensive but a huge inconvenience when I needed to find parts in Mongolia or Russia.

In my opinion, auto-oilers may be worth it, provided they work properly. If you’re riding long distances and/or you ride a lot of tarmac, even better. Consistent dirt roads may prove to be too much for the oilers to keep up, which is why many off-roaders stick to the tried-and-true grunge brush and cheap gear oil method.

Others, like Dave, will argue that, with proper care and maintenance, a Scottoiler will go the distance, even when faced with multiple days of rain, mud, sand, and other compromising road surfaces. RTW and ADV riders might want to seriously consider the ease and practicality of an auto-oiler. 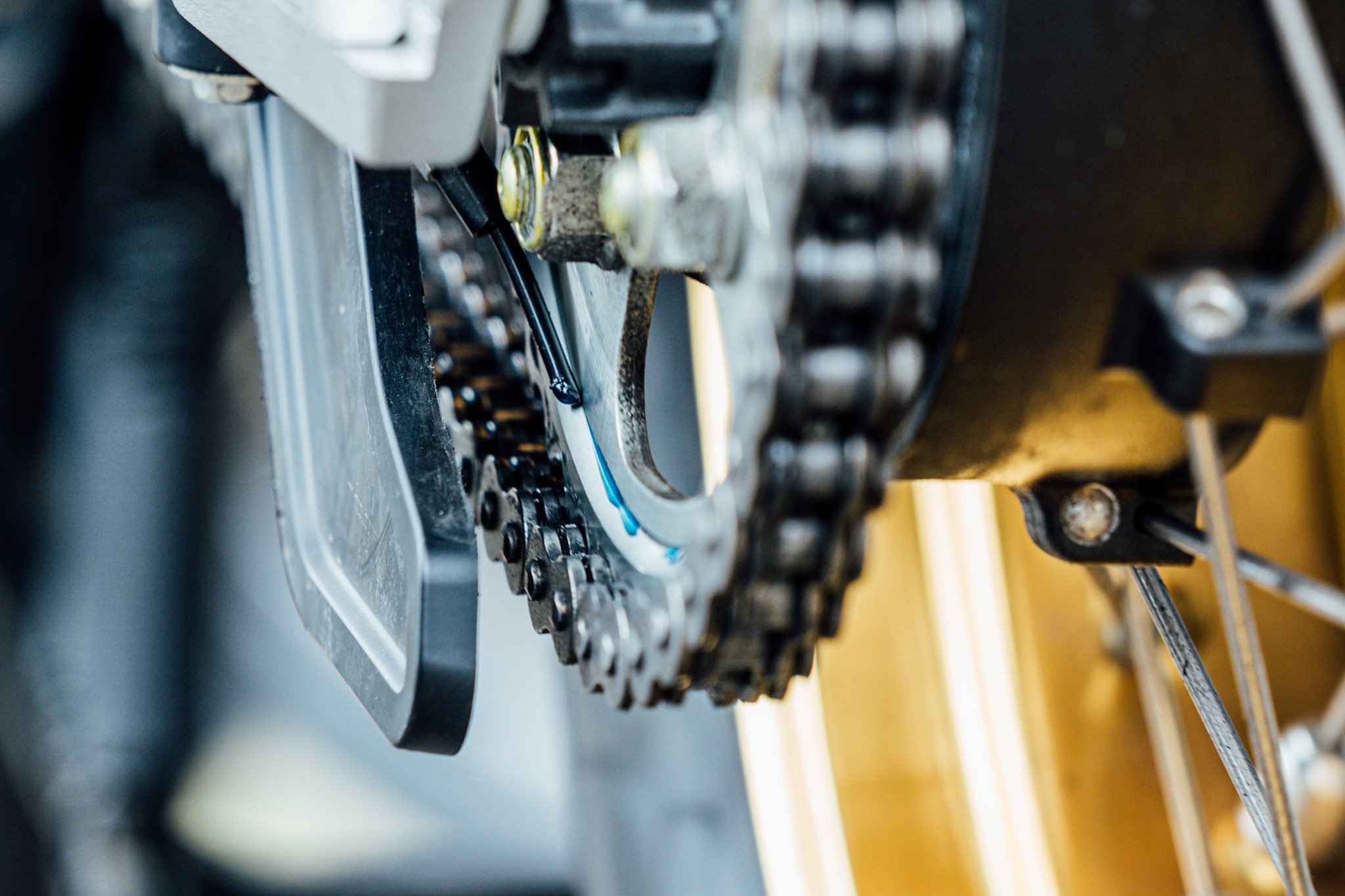 How do you keep your chain lubricated? Let us know in the comments below.

Pros and Cons of the Scottoiler 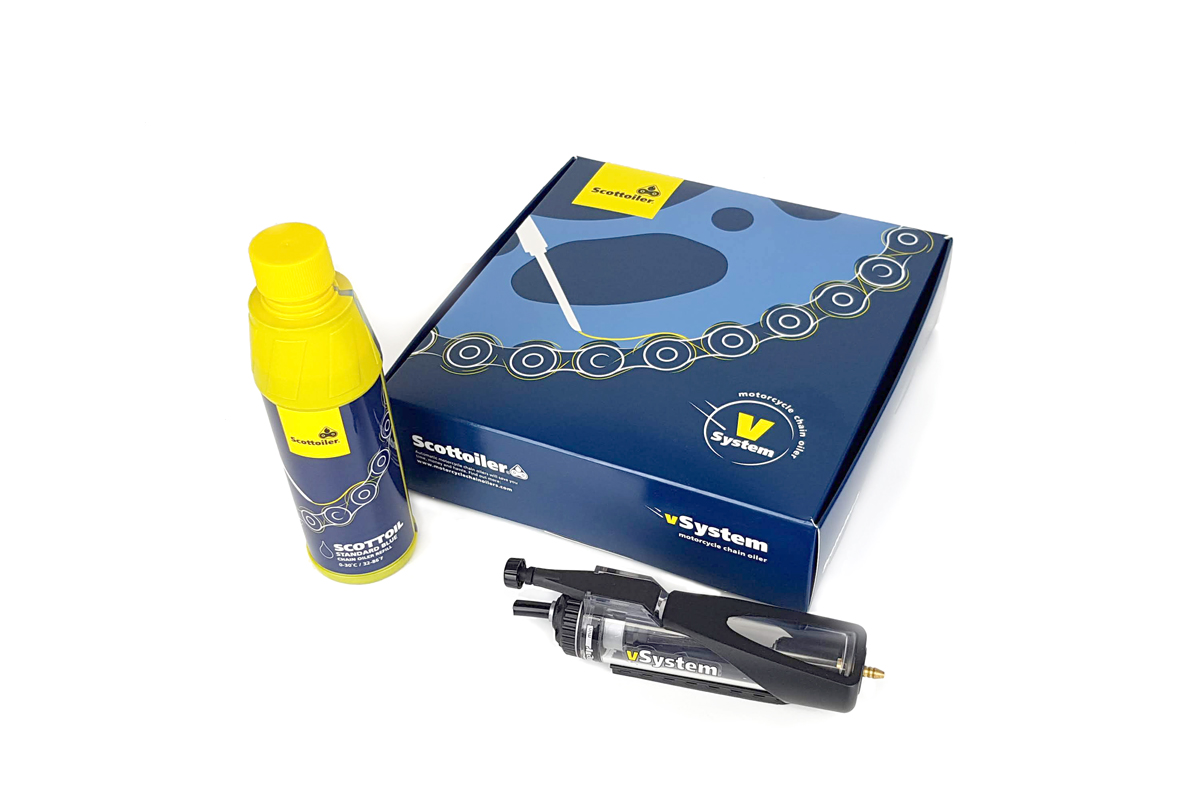 The History Of Scottoiler

Scottoiler has been around since the 70s when Fraser Scott invented the method of continuous chain lubrication and designed the first Scottoiler. On regular visits to his girlfriend’s house in Manchester from his own home in Glasgow, Fraser noticed his chain wearing out too fast on his Suzuki 750. The O-ring chain couldn’t be removed without taking off the swingarm, and by the time Fraser got to Manchester, he needed to figure something out as the chain was hanging from the sprockets. 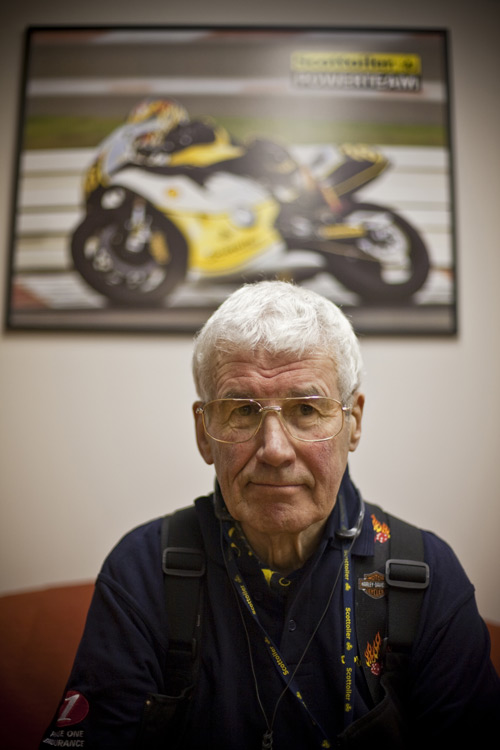 Fraser wondered if he could adapt the vacuum petrol tap and make an auto-chain oiler. His idea was the start of his career as the Scottoiler inventor.

In 1983, TML, a local company Scottoiler partnered with, manufactured 10,000 oiler systems and launched them at a UK motorcycle show, but only 50 sold. Sacrificing his social life and all of his money, Fraser carried on with his inspiration and sold the oiler kits by mail-order from his living room. In time, riders were recommending Scottoilers to their friends, and business picked up. Fraser says his proudest moment was forming a partnership with BMW Motorrad.

Fraser’s daughter, Fiona Scott Thomson, now runs the family business, which has grown to employ more than 20 people. Scottoilers are sold to over 40 countries around the world.