Thunder crashed about us, reverberating of the great cliffs of Fifty Mile Mountain away to our south and bouncing of the natural rock amphitheatre of Dance Hall Rock just behind us. Lightening flashed in a coruscation of blinding light and pulsating natural power as the leading edge of the thunderstorm rolled over the cliffs and rocky hills around us. A splattering of raindrops followed, but the storm was more of a light and sound show than any real drenching, the few drops hardly settling the dust and only occasionally gathering in small pools on the sea of rock that surrounded us.

That rolling sea of rock that swept away from us in all directions was, in fact, ‘petrified dunes’ that were once mobile sand dunes that over the eons of time have fused together in a much more stationary form, but are now even more impressive in their harsh bare starkness. The 4WD trail we were following dipped and climbed, curled and wandered amongst these low rock swells, the waves of rock becoming more pronounced and dominant the further we progressed along the trail. 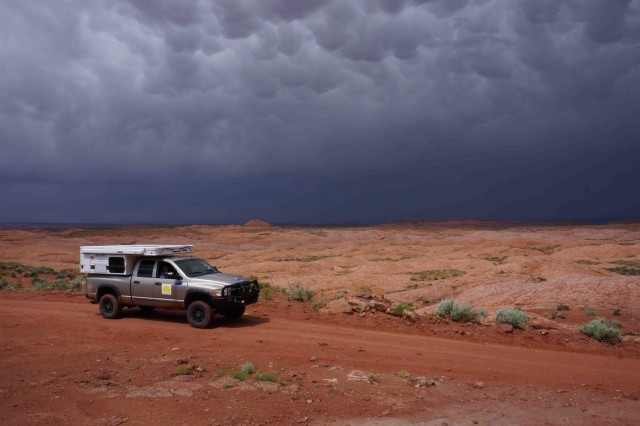 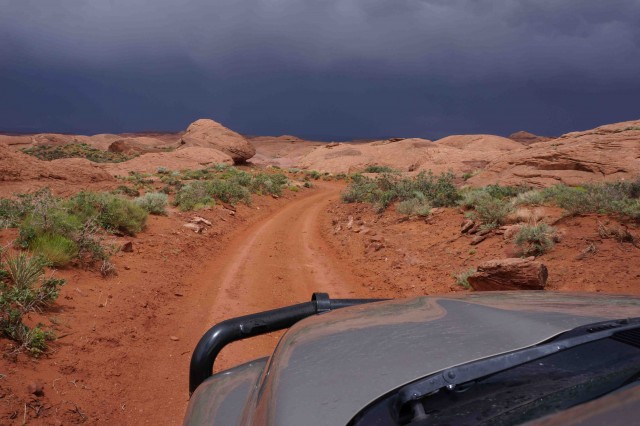 We were following in the footsteps of one of the most incredible endeavours of the settlement of America’s Wild West, when in the late 1870’s a group of Mormon pioneers set off to establish a community in the southeast of Utah. Their wagon train of 80 odd wagons, 250 people and hundreds of livestock blazed the trail from the small community of Escalante eastward and when they came to the 600-metre sheer cliffs that bordered the Colorado River in an area we call Glen Canyon they simply resolved to push on. 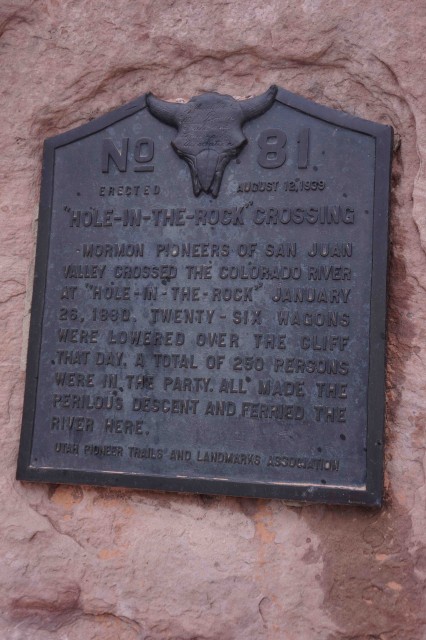 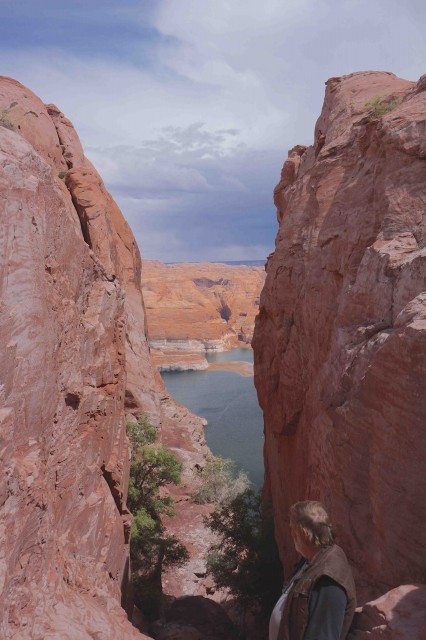 They set about the task of widening a crack in the defile they discovered – now known as Hole-in-the Rock – suspended a road out from the edge of the cliff in places, and lowered their wagons, livestock and people down the scary, near sheer slope. Once at the bottom, they then had to build a ferry to get themselves across the raging, untamed at that time, Colorado River. Rather surprisingly, after all they had been through, it was then there hardships really began as they climbed and tried to find a route up the other side of the near sheer-faced canyon. Talk about pioneer grit and fortitude, backed up no doubt, by a big dose of religious fervour. 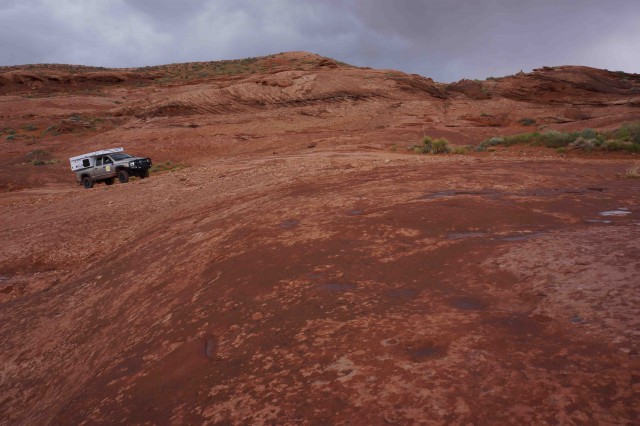 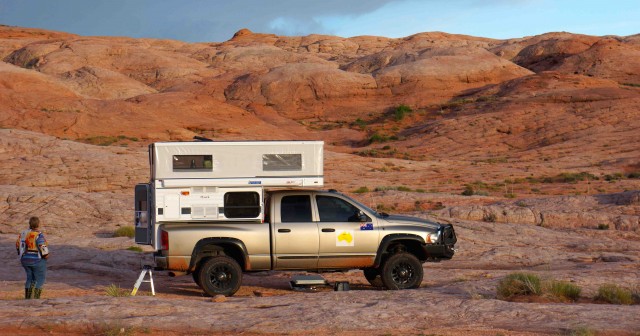 Still, until you stand on the edge of that high cliff at Hole-in-the-Rock and look down to the waters of what was the Colorado River, and is now the backwaters of the man-made Lake Powell, the full enormity of what they did is impossible to comprehend. Even then most people are in complete and utter awe of what the pioneers achieved and that is reflected in the Visitors Book that is found nearby; ‘unbelievable’ ……’crazy’ ……..’stupendous’ ….. ‘stupid’ …. ‘awesome’ …. ‘terrifying’ ….. were just some of the single word comments listed.

We wandered the cliff edge and climbed a short distance down the defile, shaking our heads in wonderment all the time. Then, with nobody around – we had only seen a couple of vehicles all day – we set up camp nearby, our surrounds and view being identical to what those early, hardy and resourceful pioneers had experienced. 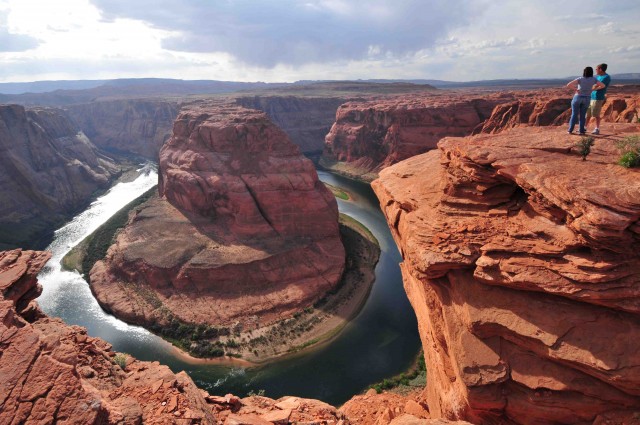 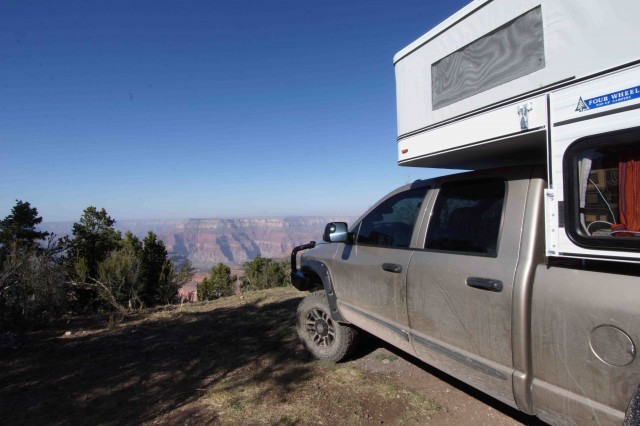 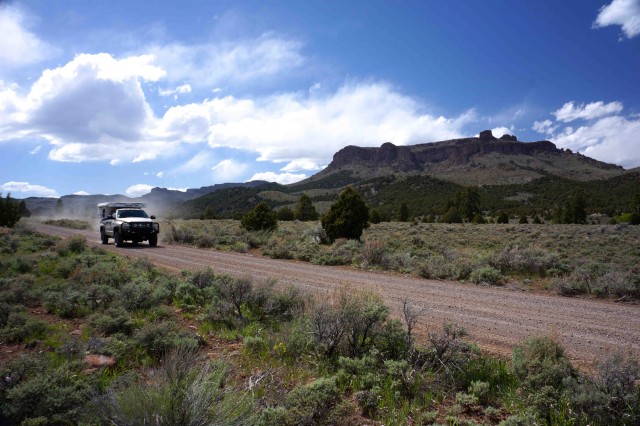 Our latest travels in the south-west of America had started a few weeks previously when we had headed off in our Dodge Ram 2500, fitted with a Four Wheel Camper, taking first up the delights of the Grand Canyon. While the popular viewpoints on the South Rim are crowded much of the time, the North Rim is far less so. Then, if you head either west of east from Bridle Veil Lodge, that is the heart of the North Rim, you will end up on a series of forest trails that take you to the very lip of the canyon. Here, you can find a spot to camp all to yourself …. near unbelievable, but true!

From the North Rim we had headed to Page where the mighty Colorado River has carved another canyon where amongst an incredible range of vistas there is Horseshoe Bend and Antelope Canyon, the latter only spoilt by the sheer number of people that wander through it on guided tours. 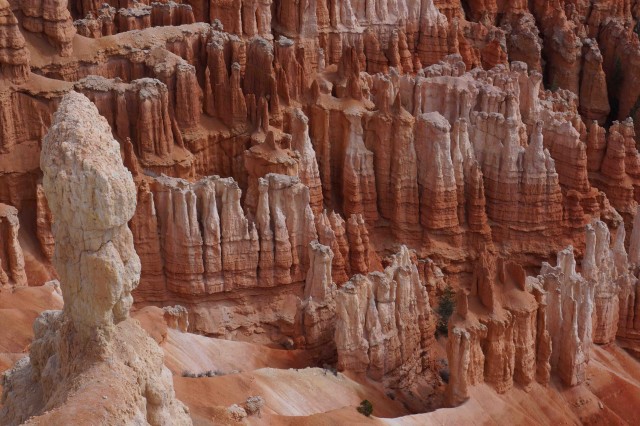 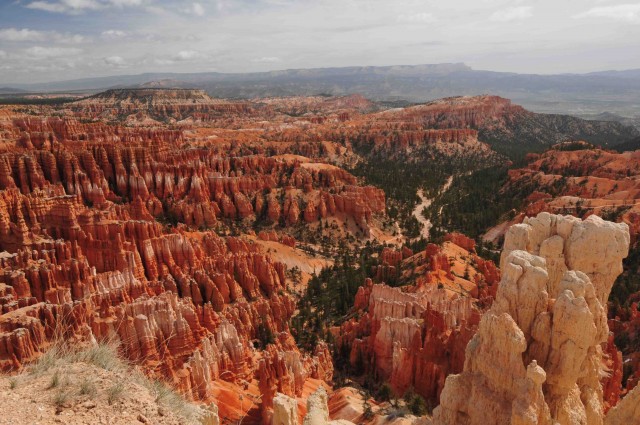 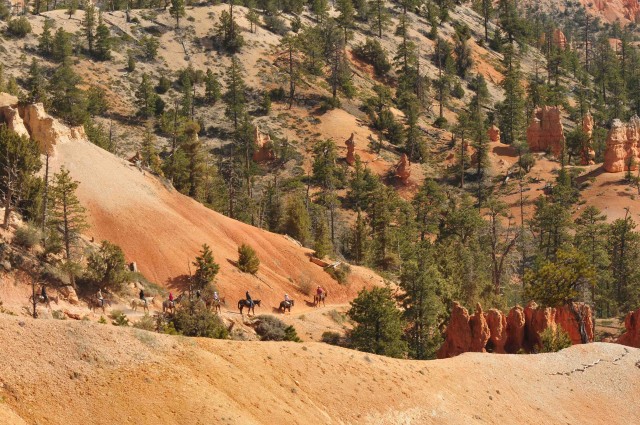 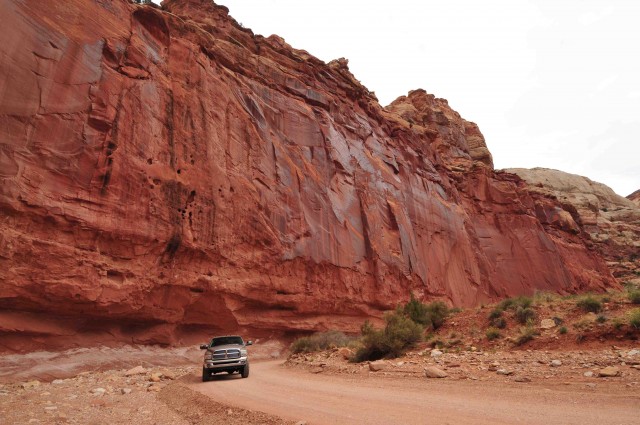 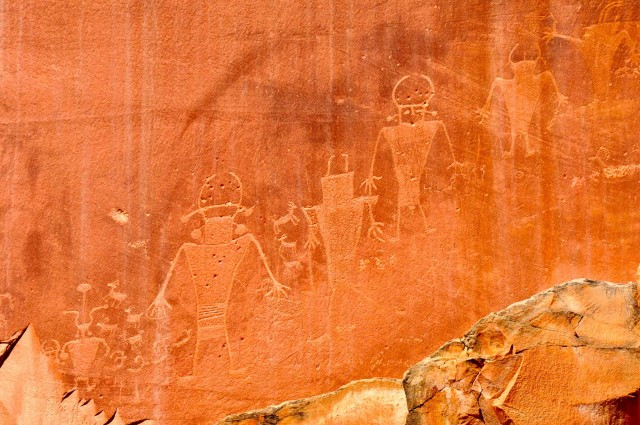 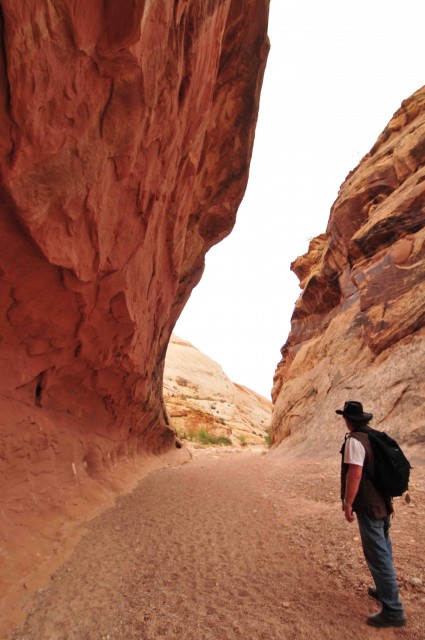 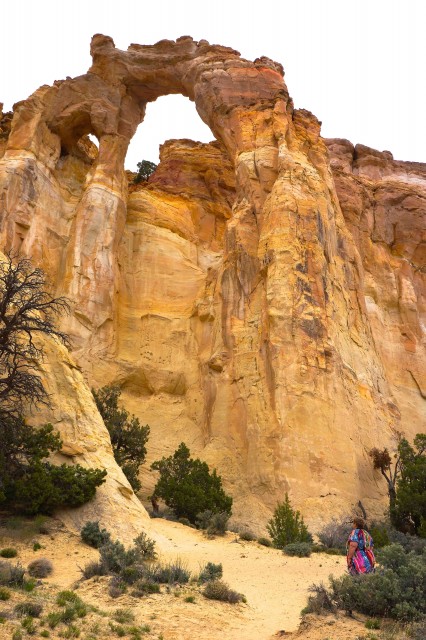 From Page we had headed north-west and crossed into what has become our favourite state in the Union – Utah! Slipping off the pavement we entered the Grand Staircase-Escalante National Monument, a vast area that links many of the nations finest national parks including Bryce Canyon, Canyonlands and Capital Reef National Parks, along with the Glen Canyon National Recreational Area, into a contiguous 5.7 million acres of protected lands … and that doesn’t include the huge areas of national parks and forests that border these reserves or those that are close by.

Our route through the national monument took us along the Cottonwood Canyon Trail and some isolated camps along Cottonwood Creek before coming to the rock formation of Grosvenor Arch and then the multi-hued Kodachrome Basin State Park.

Nearby is the popular and impressive Bryce Canyon National Park and while we took in some of the views and wandered the walking trails for a short distance it was way too crowded and we headed for the adjoining Dixie National Forest and picked up the Great Western Trail. This trail runs from the Mexico border in Arizona to the Canadian border in Montana and passes mainly through national forest and BLM (Bureau of Land Management) land for the whole way. It would make a great trip and one we are planning to do on a future sojourn to the States.

That night we camped in a the heart of a small verdant meadow at an altitude of 8000′ below a great white and red bluff dotted with pine and fir trees. A spring babbled from the ground just a few metres from our camp while deer eyed us warily from the surrounding cover of trees and scrub. It was a magical spot. 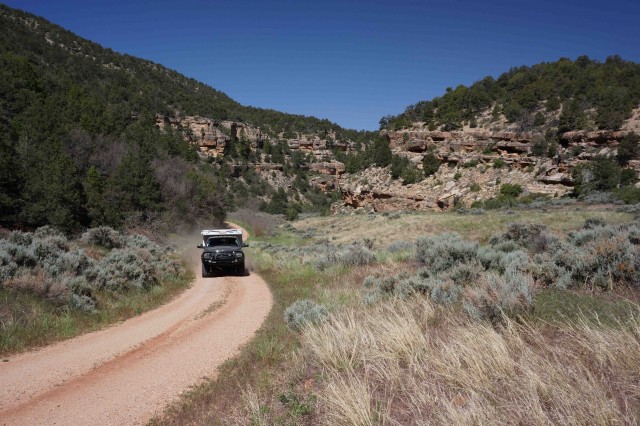 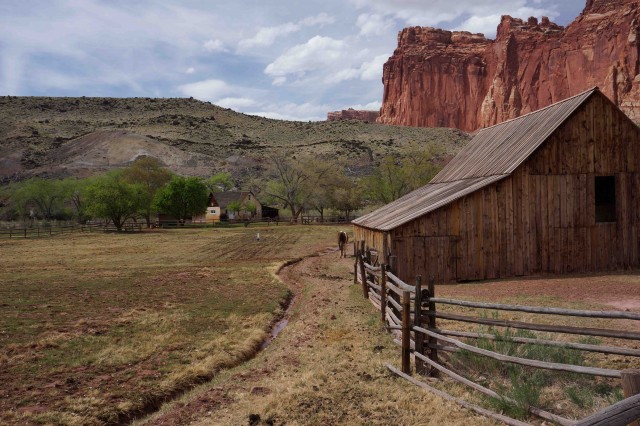 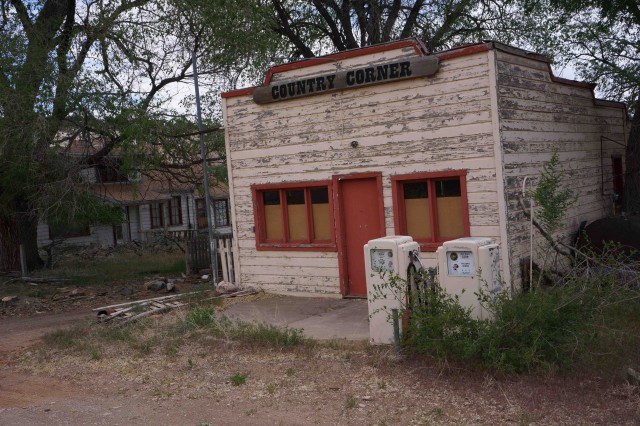 Next day we rolled into the small hamlet of Escalante and then after finding out about the endeavours of the early pioneers took to the Hole-in-the-Rock trail, which took us again to the edge of the mighty Glen Canyon. Being of weaker mind and aptitude to the early Mormons we turned back on this dead-end road and wound our way up into the higher country to the west of Escalante.

One of the things I love about touring the West of America is the incredible variety you can witness in just an hour or so drive. One minute we were in red raw rock country more akin to desert, next we were travelling through verdant pine covered mountains dotted with lakes and cut by cool trickling streams. Again we found a choice of campsites – the Forestry Service providing some fabulous camping areas while, with just a bit more flexibility and effort, we could find a more isolated spot on a pine fringed meadow, all to ourselves. 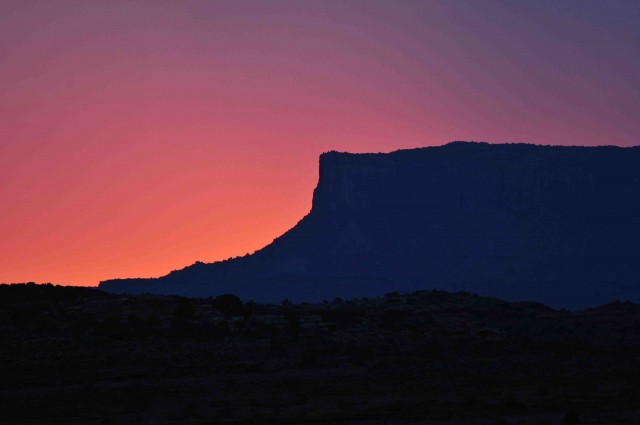 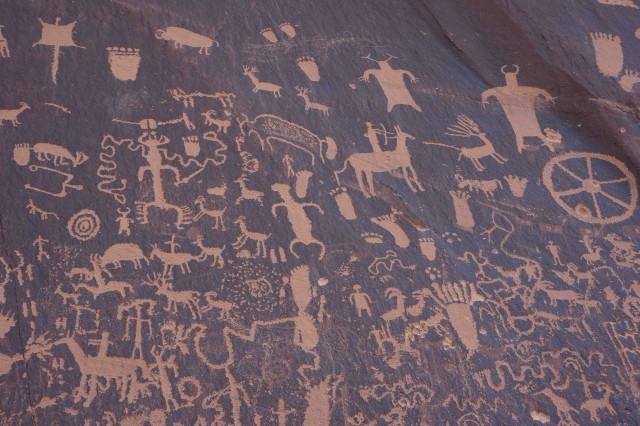 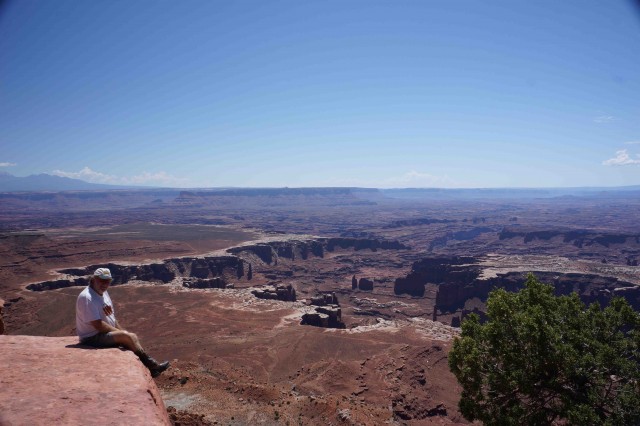 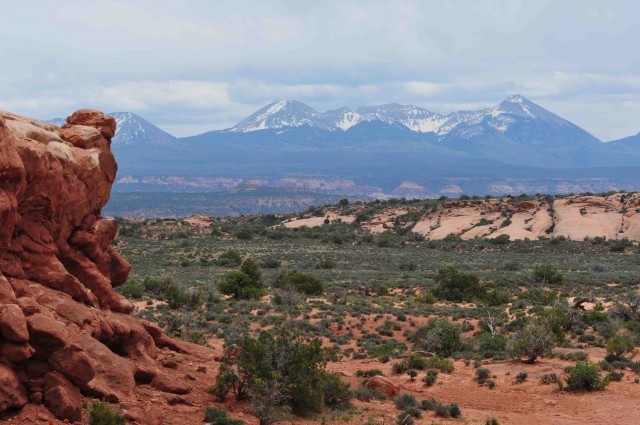 From our mountain top camp we headed east along Hells Backbone and then onto the Burr Trail leaving the Grand Staircase-Escalante NM and passing through the bottom section of the Capitol Reef NP in an impressive series of switchbacks as the trail dropped over the edge of the Waterpocket Fold: the dominating 150-kilometre long feature of this spectacular national park.

For the next few days we wandered the back roads, mainly through BLM land, leading to Moab and the mind blowing vistas of Canyonlands NP and the gravity defying rock formations of Arches NP. We had been to both parks previously and while there were always a few people around, these two parks and the surrounding country offer some of the best scenery, walks and four wheel drive trails in all of the US. After four trips there I still can’t get enough! 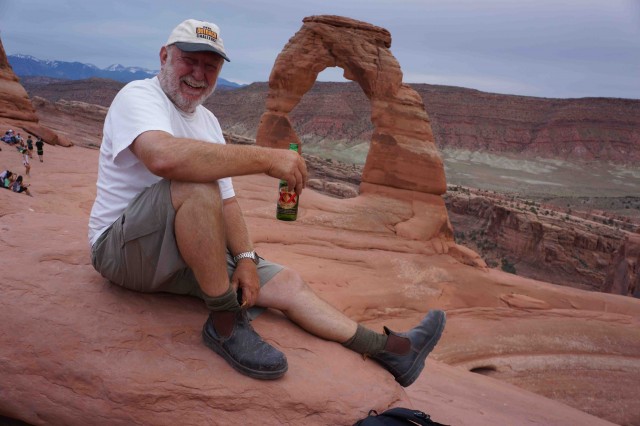 From Moab itself you can partake in any choice of adventures from hiring a rock crawler or ATV, to going rafting on the Colorado, climbing or abseiling some of the many sheer rock faces in the surrounding area, or horse riding or mountain biking on some of the high desert country trails that radiate from town.

After a somewhat disjointed wander through this four-wheel drive and adventure mecca we made our way south into New Mexico, then once more we took to rarely used trails in the wake of some of the Wild West’s most famous characters – Billy the Kid and Kit Carson to name just two ….. but that’s another story to be told in the future. 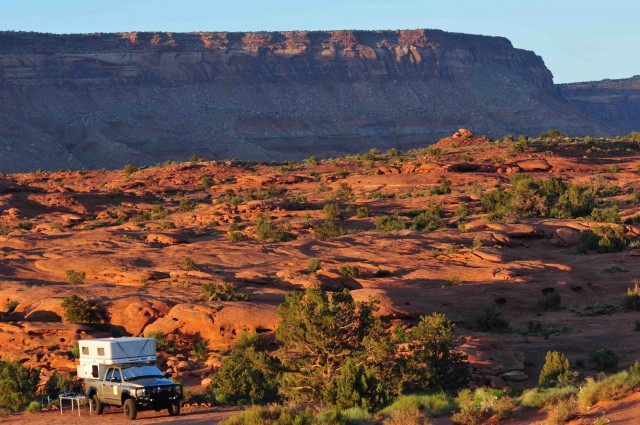 Spring (April-May) is good for touring the desert country of the South West and is less crowded than later. Summer comes late in a lot of the high country, so access can be restricted due to deep snow off the main roads & highways, so it’s best to be flexible.

All the parks, reserves and forests have great websites where you’ll find a heap of info. For the national parks/monuments, start at: www.nps.gov,

or for the national forests visit: www.fs.fed.us.

In addition, the Bureau of Land Management (BLM) controls nearly 107 million hectares of land in the West and much of this is available for touring and recreation – see: www.blm.gov.

We always buy a state atlas of each new state we visit in the West – with their detail on tracks and reserves it will open up a whole new world to the adventurous traveller.

RON & VIV MOON have spent much of their lives exploring and writing about Australia’s wild and remote areas. In their travels they combine many interests such as 4wd touring, camping, bird watching, diving, hunting, canoeing and fishing, as well as photography, and this is reflected in the many articles that they have written for a wide range of magazines in Australia. 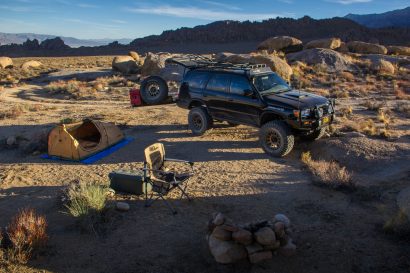 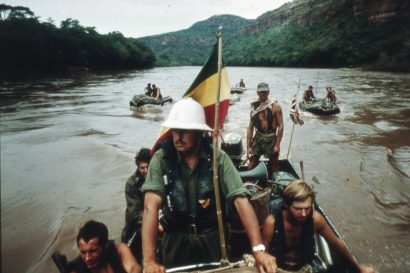 Visit the Royal Geographical Society and Meet the Explorers 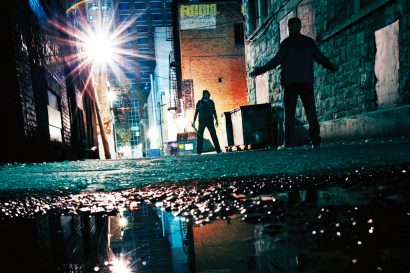