I must’ve used my traditional-style car awning only a handful of times over the year or so that I owned it, mostly because of the difficulty it took to set it up. Whenever I wanted to use my awning while I was by myself, it was almost always a quick “Nope” as I laughed at the thought of the poles and fabric smacking me again. I’ve recently upgraded to the Kinsmen Hardware 270 Quick Deploy Awning, however, and now I find myself using it just about every trip, even on quick lunch stops. 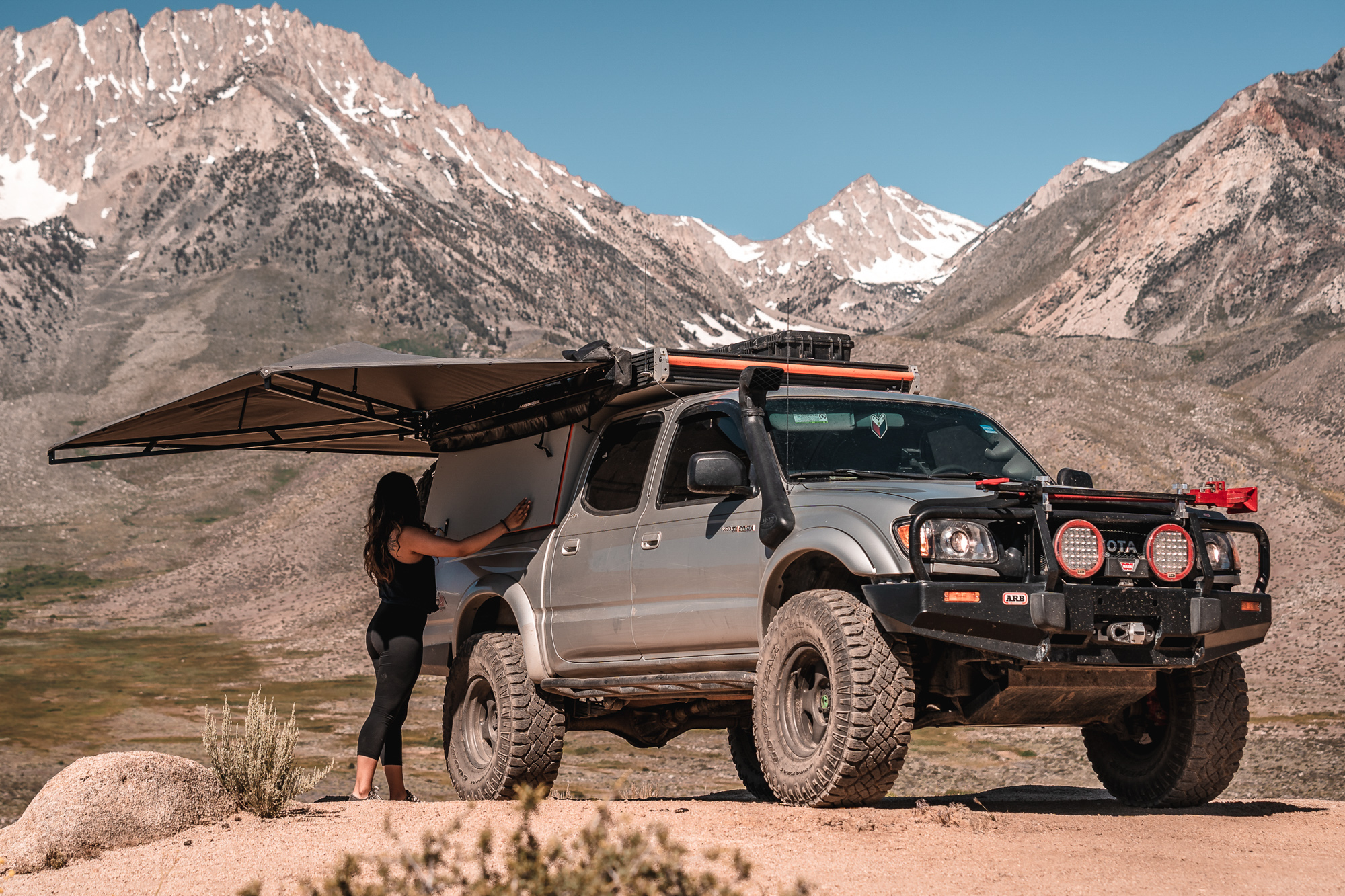 The Kinsmen Hardware 270 At a Glance 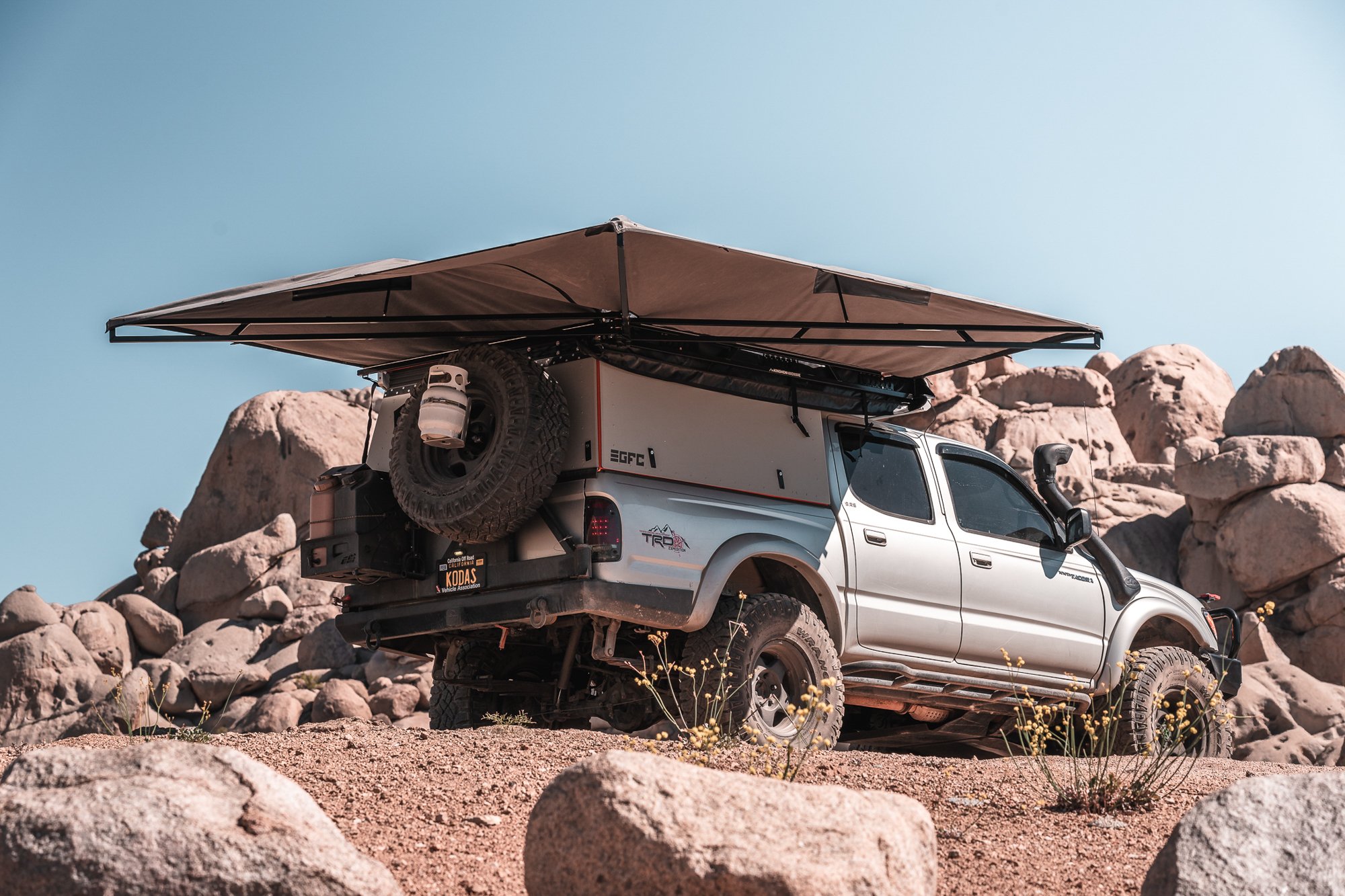 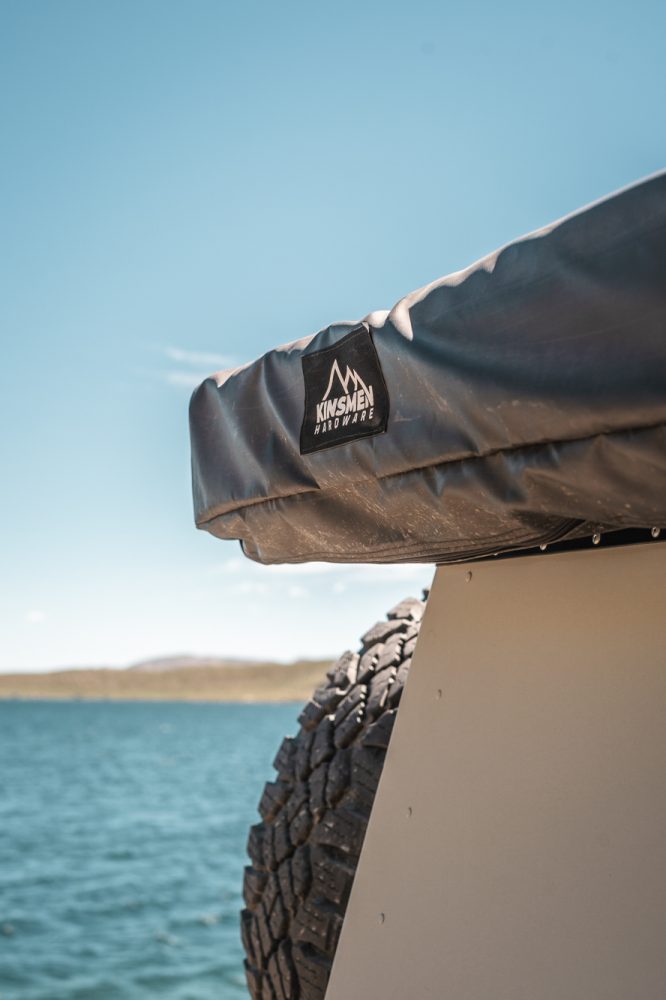 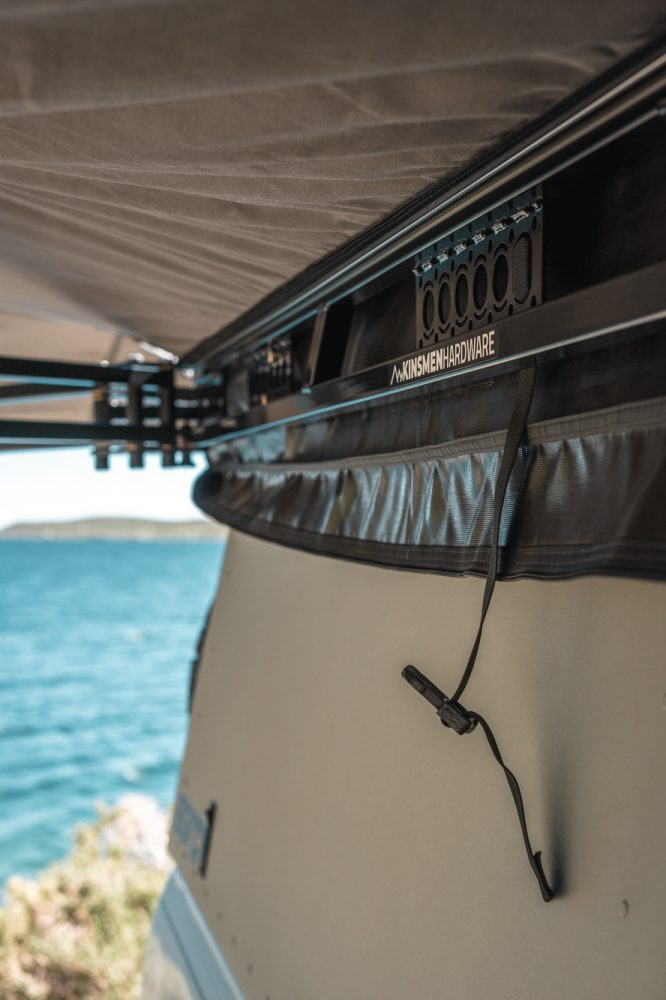 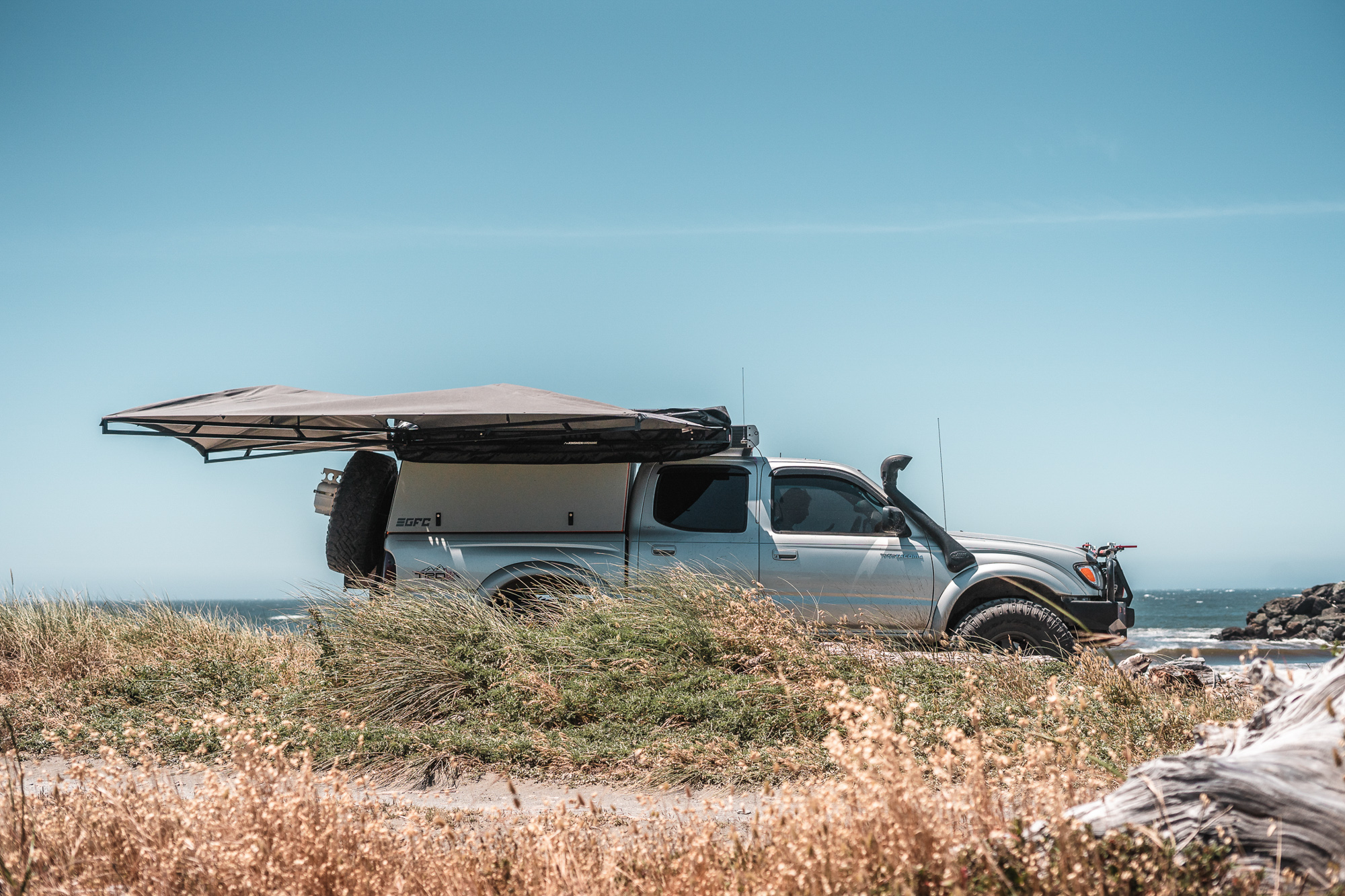 The new Kinsmen Hardware quick-deploy, 270-degree Awning is one of the best awnings on the market, and I’m stoked have one. But as with everything, there are always going to be trade-offs. Let’s get into it.

The awning is incredibly easy to set up alone. After unzipping the 14-ounce domestic vinyl-coated polyester cover, you’re only two buckle clips away from releasing the high-quality, marine-grade Sunbrella fabric. You only need to lift the awning arms off of the perch they sit on and walk the farthest arm around to the backside of the vehicle until it automatically clicks into place and you’re done. How convenient is that? No support legs to install and no straps to fuss with while you try to keep the awning from swinging away from you. These steps take about 15 seconds, which is all you will need for a quick lunch stop or coffee break. 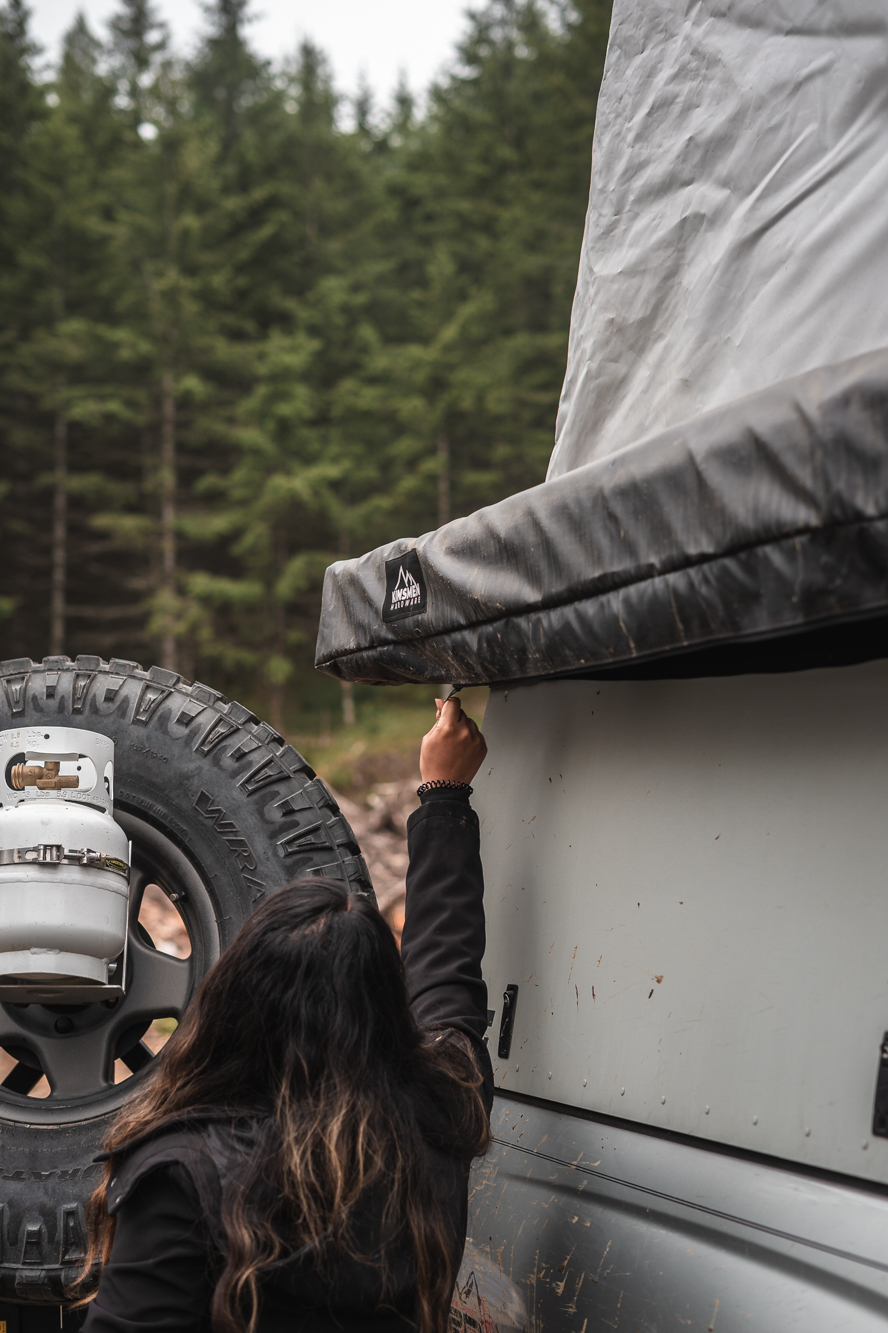 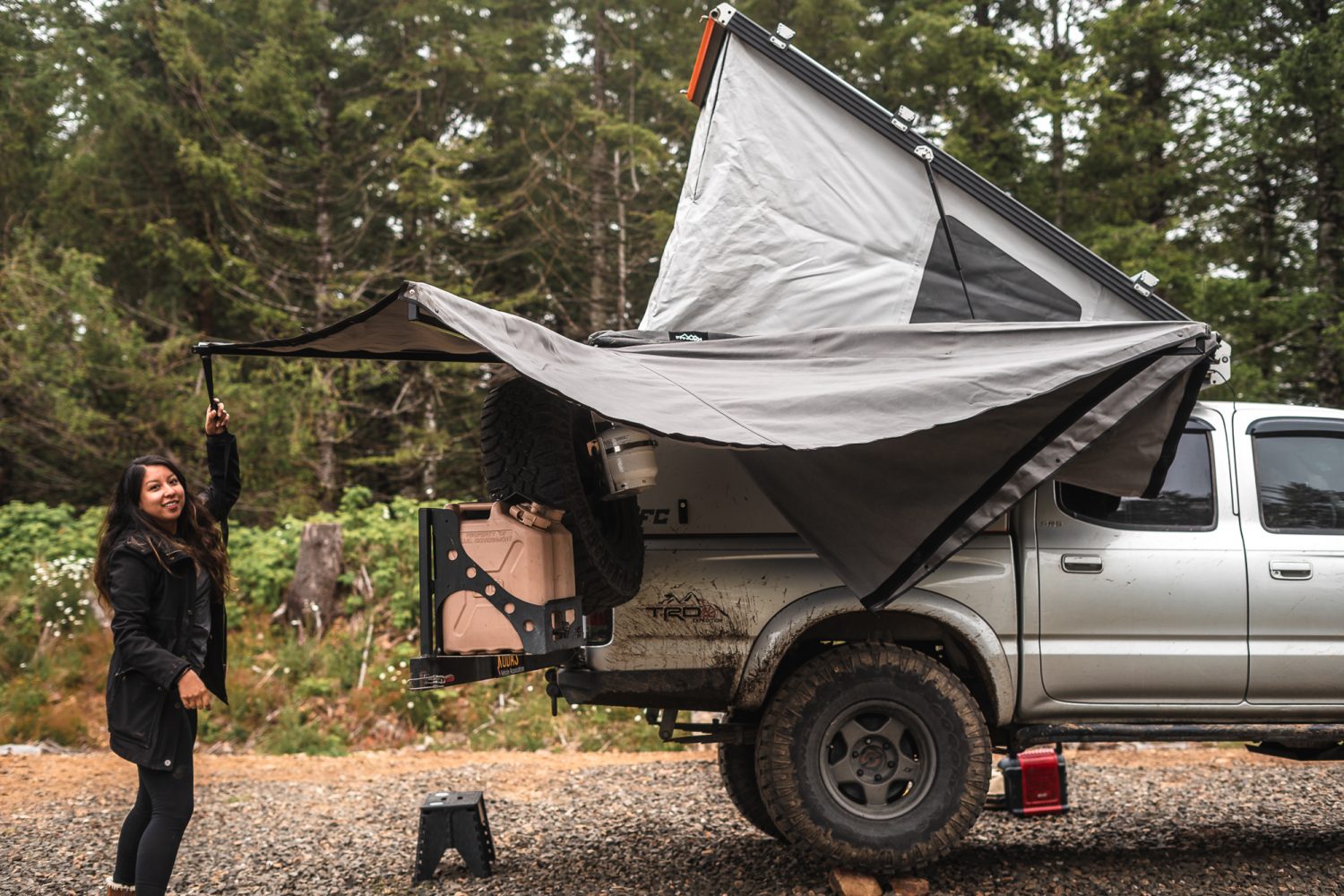 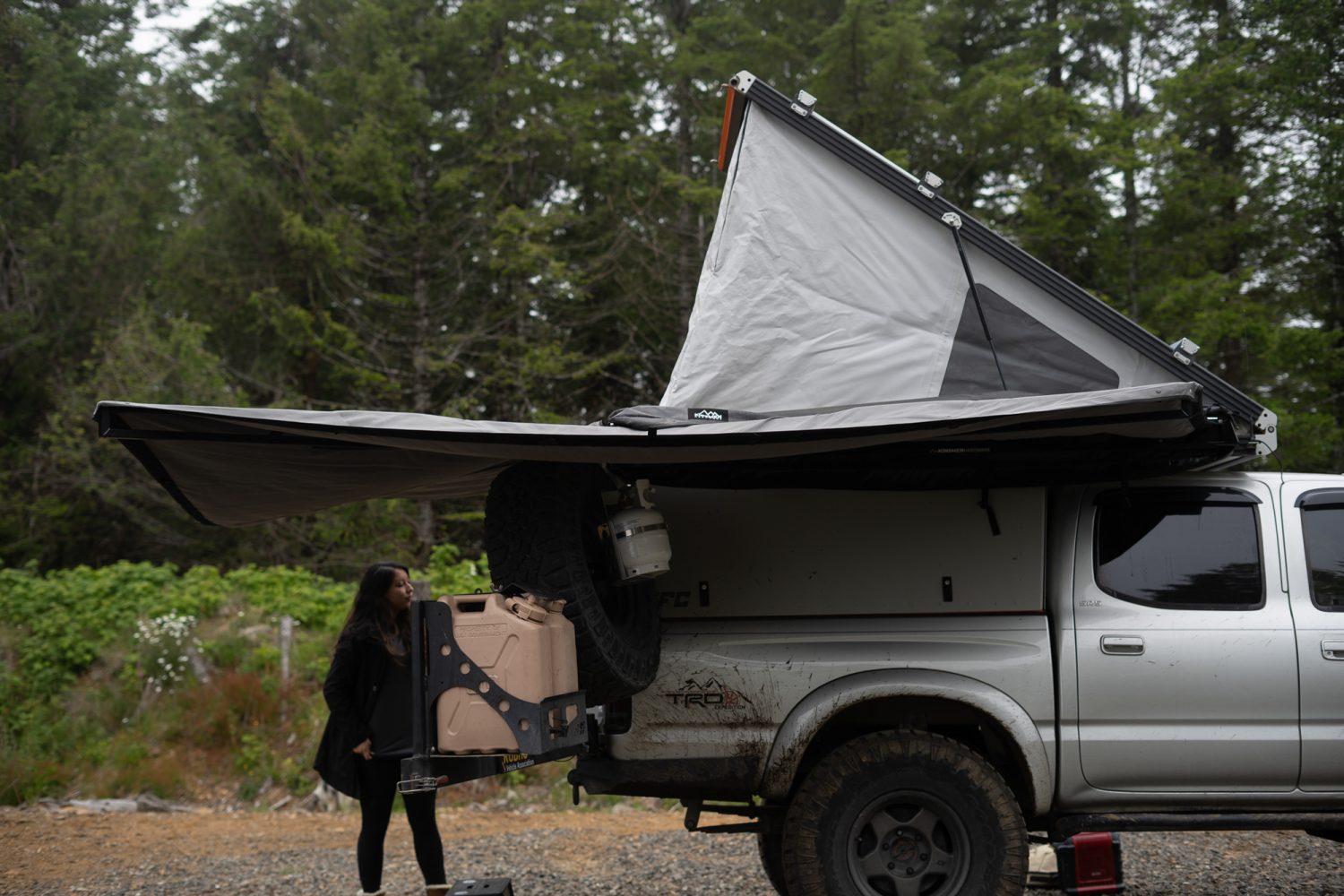 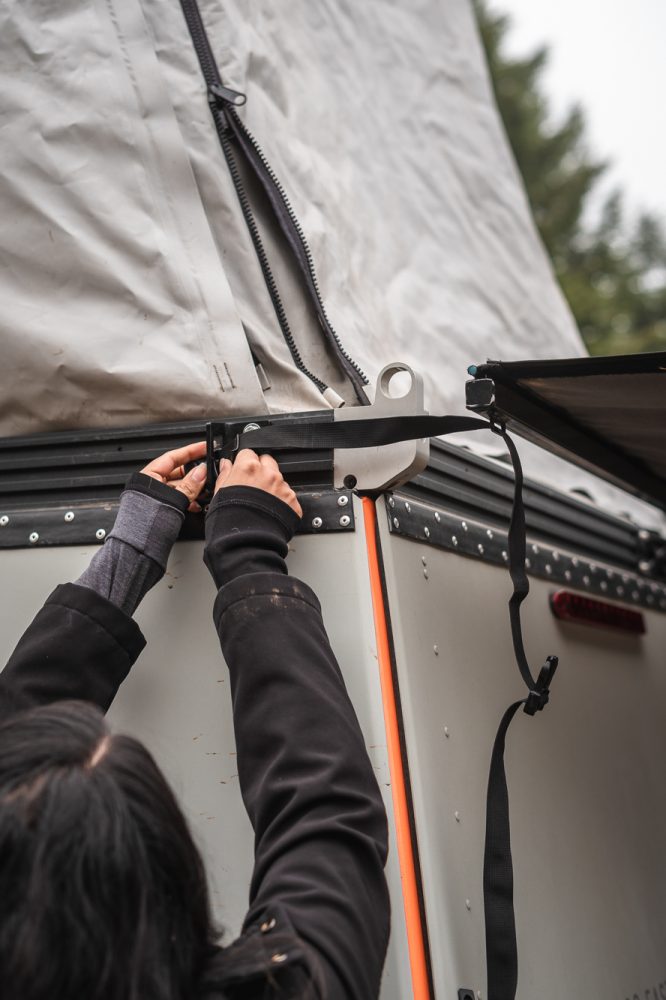 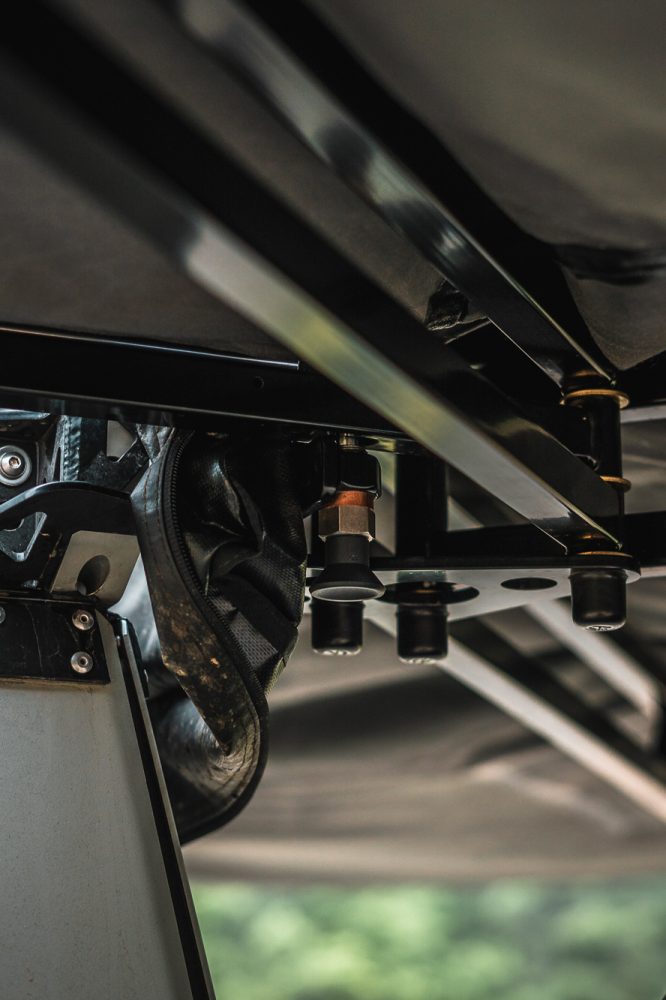 For longer stops, the Kinsmen has some additional features that are worth taking advantage of, even if they aren’t strictly necessary. For starters, there’s an additional support clip on the end of the awning you can tighten for stability, which I always do since the awning is legless. Then there are three short poles on top of the armatures which raise the Sunbrella fabric up to provide improved headroom and high points for water runoff. Even with these steps, the total average setup time is about 30 seconds, and easy enough for anyone to complete on their own. 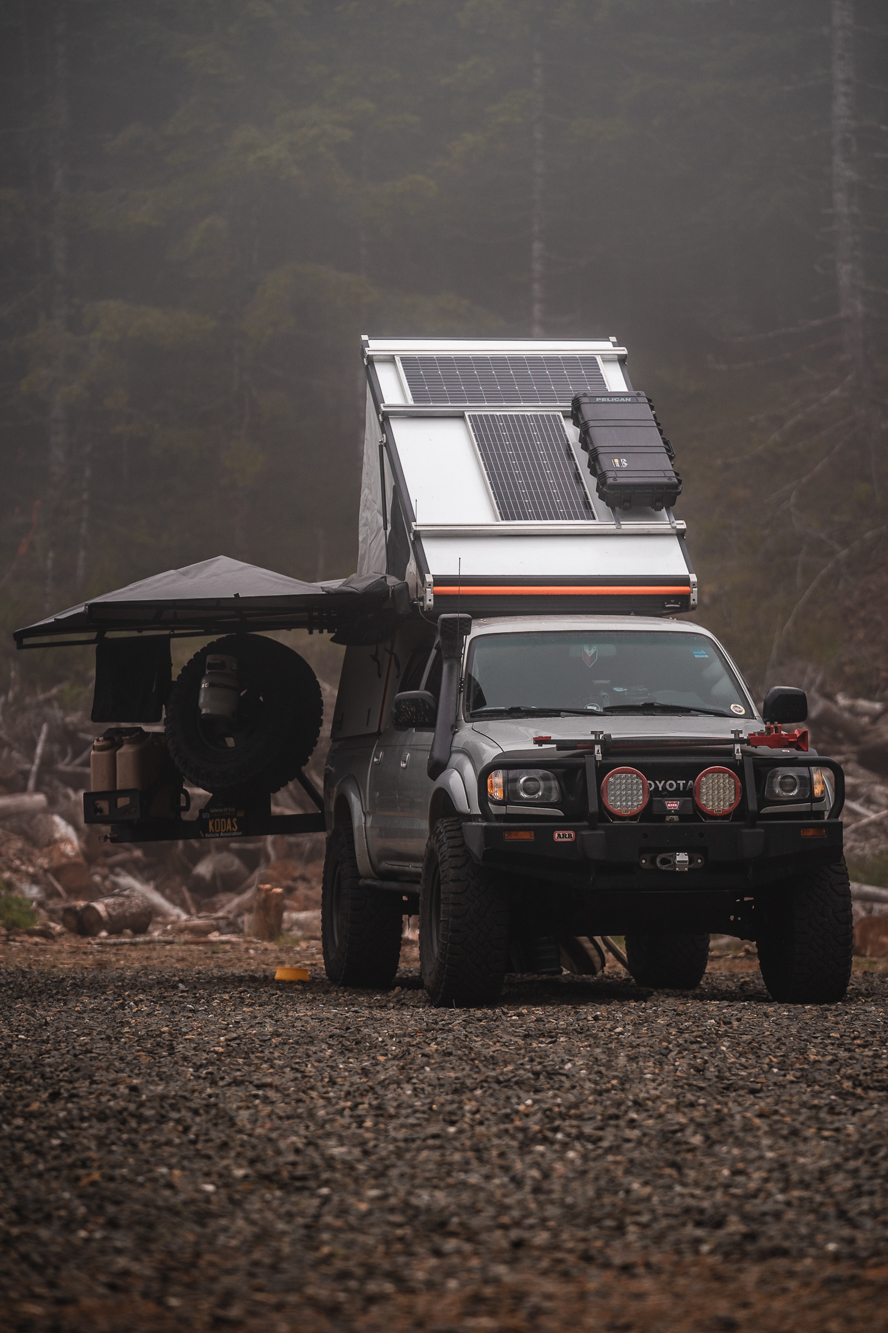 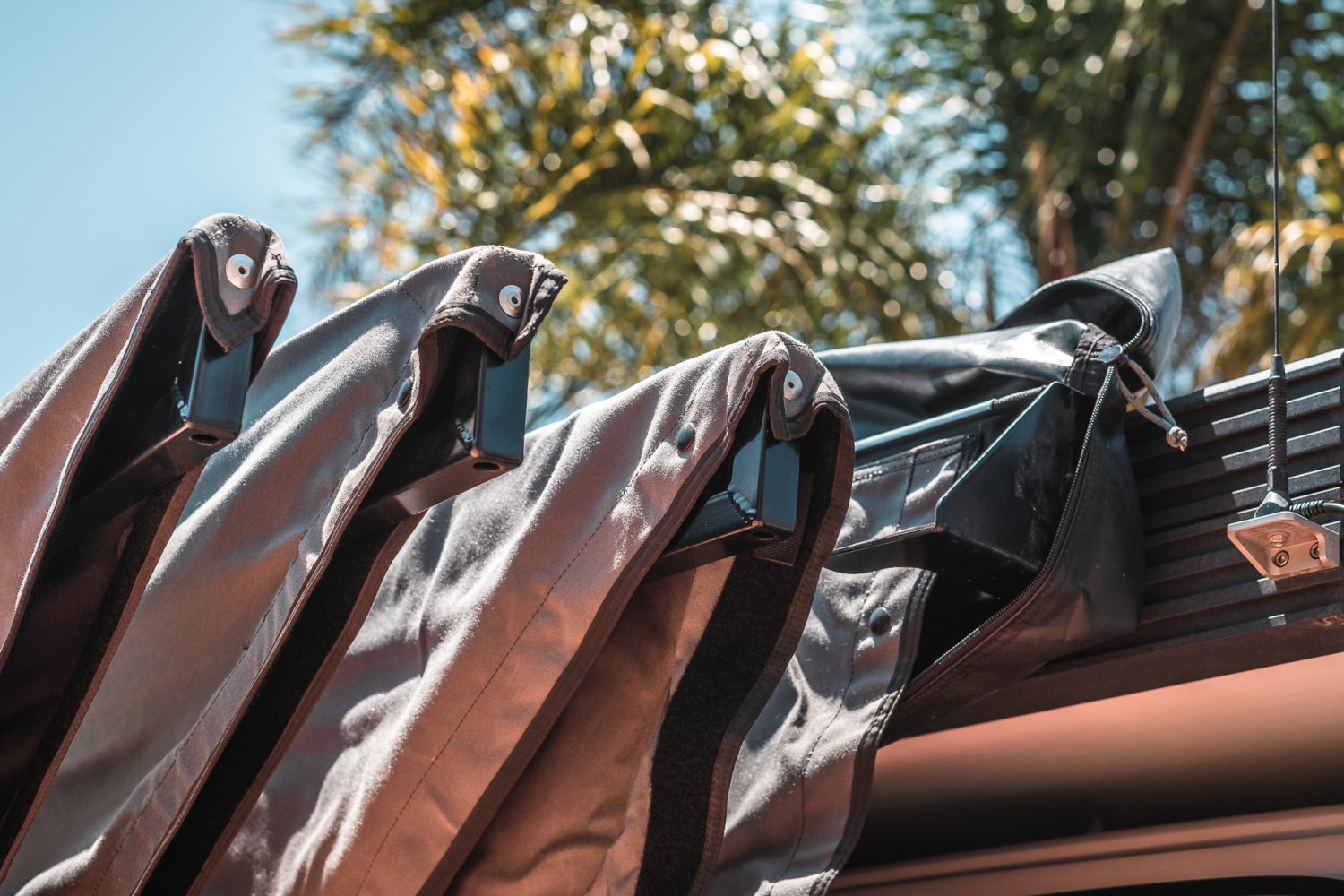 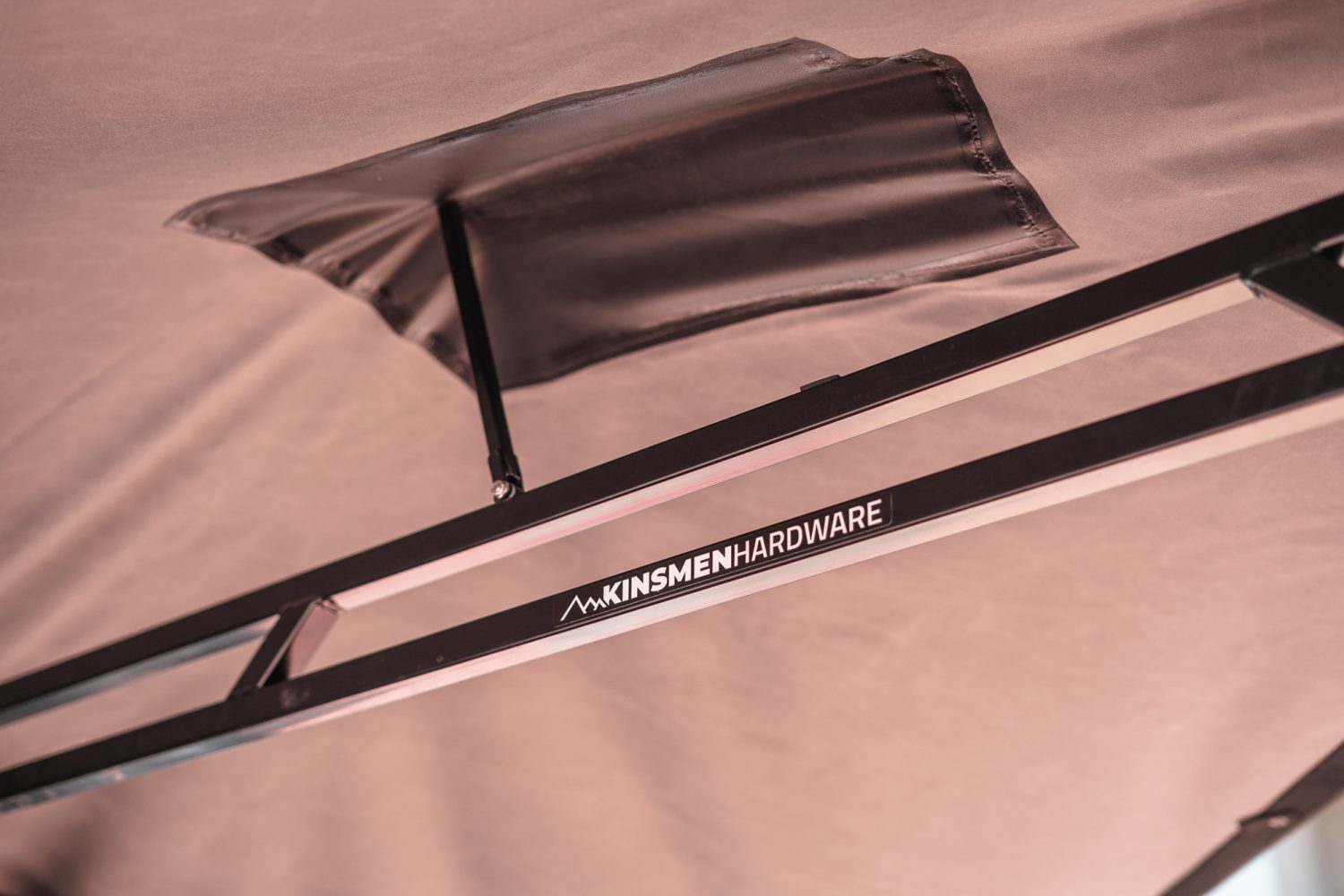 This awnings’ arms are constructed of 1-inch-square 16-gauge steel tubing, which allows this unit to have incredible strength while keeping its profile considerably smaller than its competition. It packs up to about 91 x 7 x 7 inches, which is not a whole lot bigger than my traditional-style awning. This allows for less drag and also streamlines a bit better with your roof for less noise. Along with steel construction comes more weight. It is about 10 pounds heavier than it’s Alu-Cab rival. This may be a deciding factor for some, but you’ll also be sacrificing its strength. The other positive thing about being constructed in steel and not aluminum is that it can be repaired just about anywhere. Aluminum is much harder and more costly to fix. Most people using this awning probably won’t be rock crawling or getting off-camber too frequently, so the weight might not matter a whole lot. 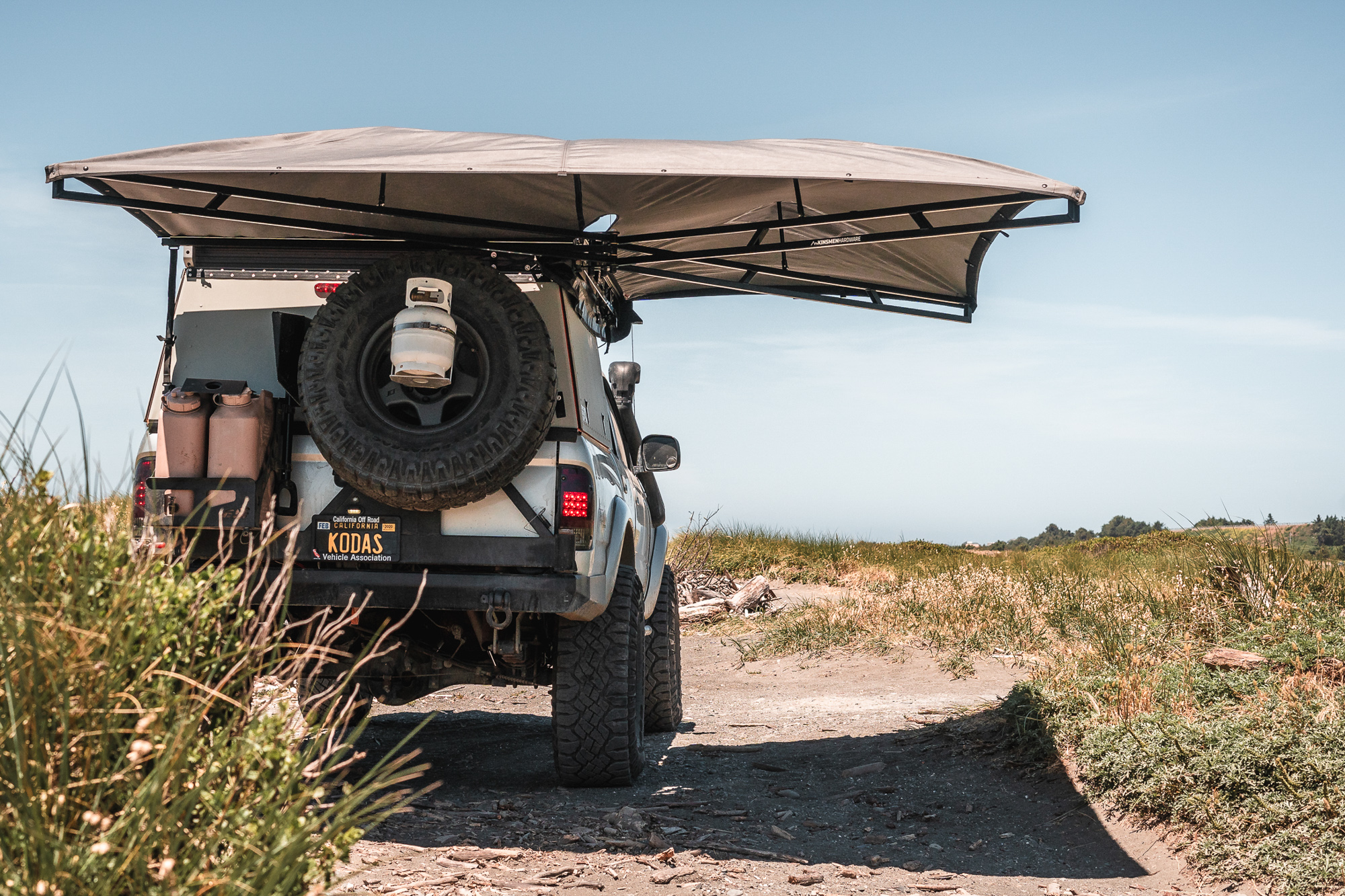 After using more traditional car awnings, I really couldn’t get over how incredibly stout the Kinsmen is. When I first saw it in person, the wind conditions had consistent gusts of about 35 mph measured by a digital anemometer. My initial thoughts were, “This can’t be safe. We should probably close it up before something bad happens,” but their team wasn’t concerned. I guess I shouldn’t have been either, because it handled the onslaught like it was no big deal. It was unbelievable. I’ve camped in gusty conditions before, and I wouldn’t have dared to set up my old awning in that kind of weather even with guying it down. I was already sold, but to drive the point home, the company’s founder decided to do a few pullups on the free-standing arms. They held firm, and as you might guess, have continued to do so through wind and rain since. 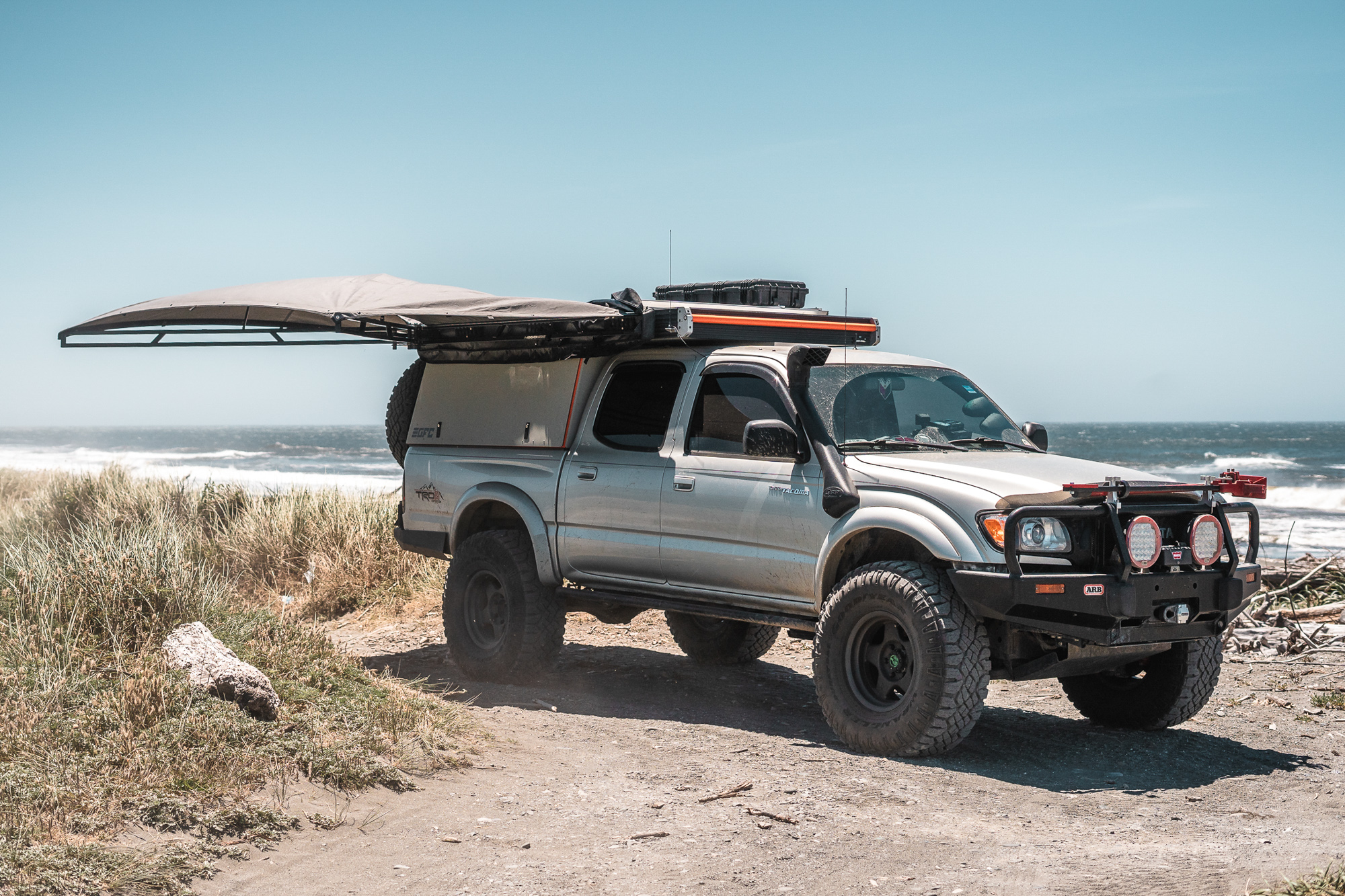 When opened, this awning has about 92.75 square feet of coverage. It isn’t as much as it’s competition, but it isn’t a whole lot less. In my experience, it’s been plenty of coverage, and I don’t count it as a negative to my review, but some might.

In extremely heavy or strong winds, there were flapping noises, but not more than you’d expect for nearly 100 square feet of suspended fabric. I think since the material is pretty heavy, it might be muffling the sound a bit. The cover of the awning is stout, and makes no discernable noise on the road. When the tent is closed and the awning is open, however, I did notice a time or two where the cover flapped around, but again, not much—the awning fabric probably took most of the hit from the wind. When the awning and tent are both open though, the cover fabric is sandwiched in between the awning bracket and the tent which eliminates the noise. Overall, I’d say noise levels are low, especially compared to the traditional awnings I’ve owned in the past. 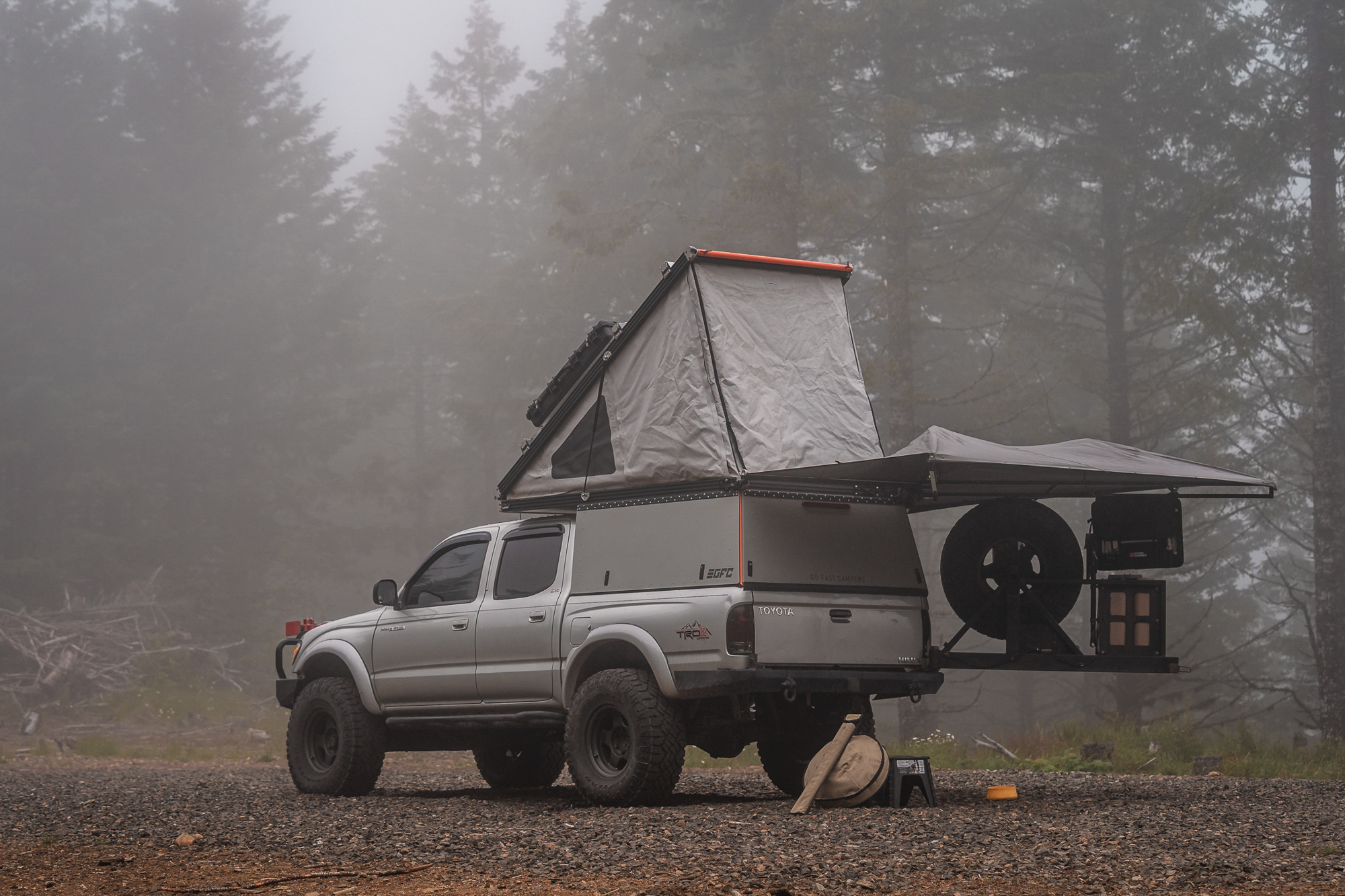 Packing it up takes a little bit longer because you’ll need to fold in the Sunbrella canvas fabric. I can pack up this awning, including its tie-down clip and rain runoff arms in an average time of 58 seconds. I think the ease of use this awning provides is great, and being able to set it up at a moment’s notice is an amazing thing.

All of Sunbrella fabrics are made from solution-dyed acrylic, making them breathable and UV-, water-, mildew-, and stain-resistant products. The fabrics are dyed down to their core and are extremely fade resistant. I believe they carry a 10-year warranty against fading for their awning fabrics. A nice touch is that the awning fabric is made with a velcro lining, hook and loop, and snaps for future accessories such as walls, room enclosures, and more. I briefly saw a prototype wall attachment while at Overland Expo West and cannot wait to get my hands on it. 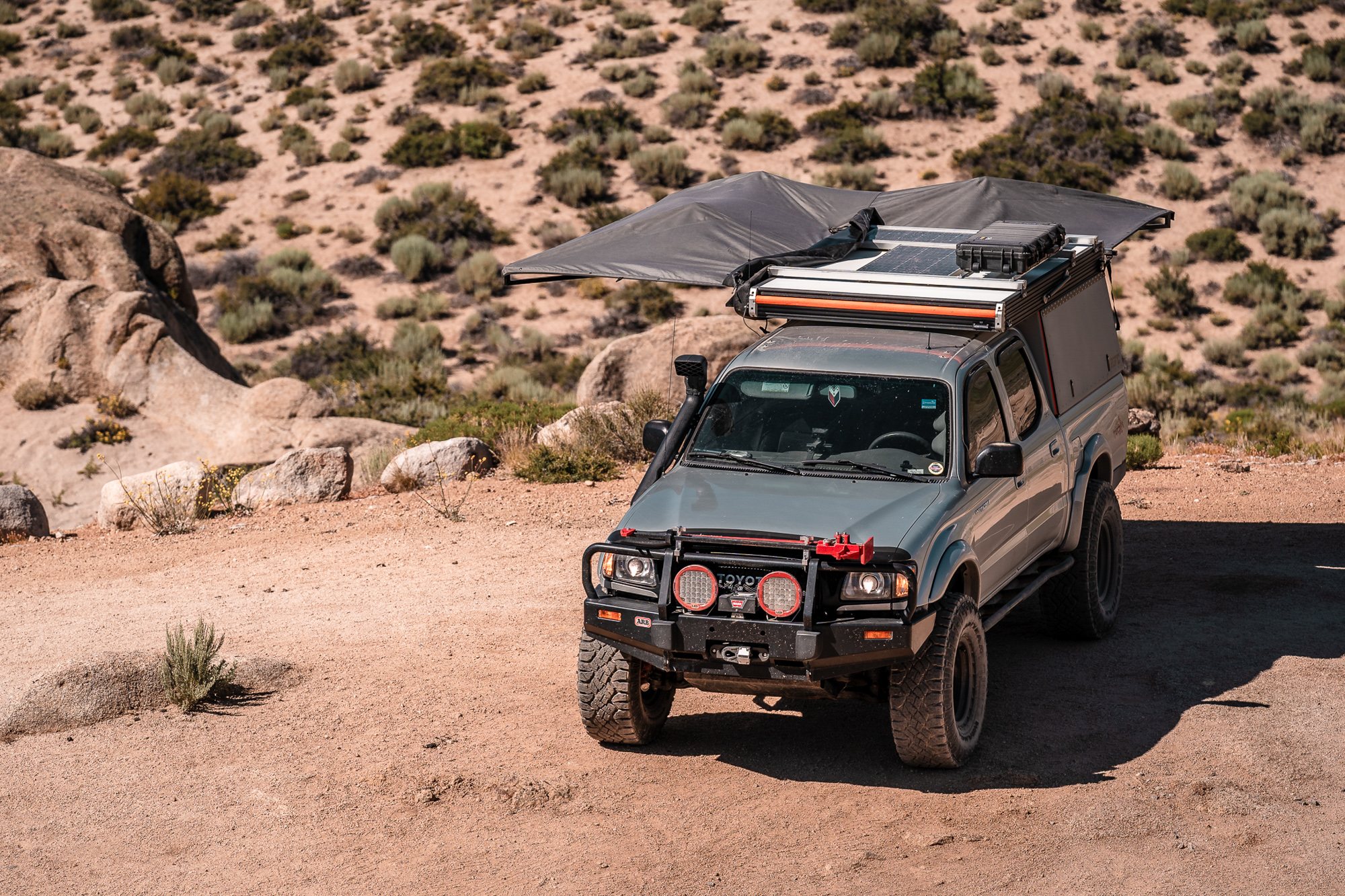 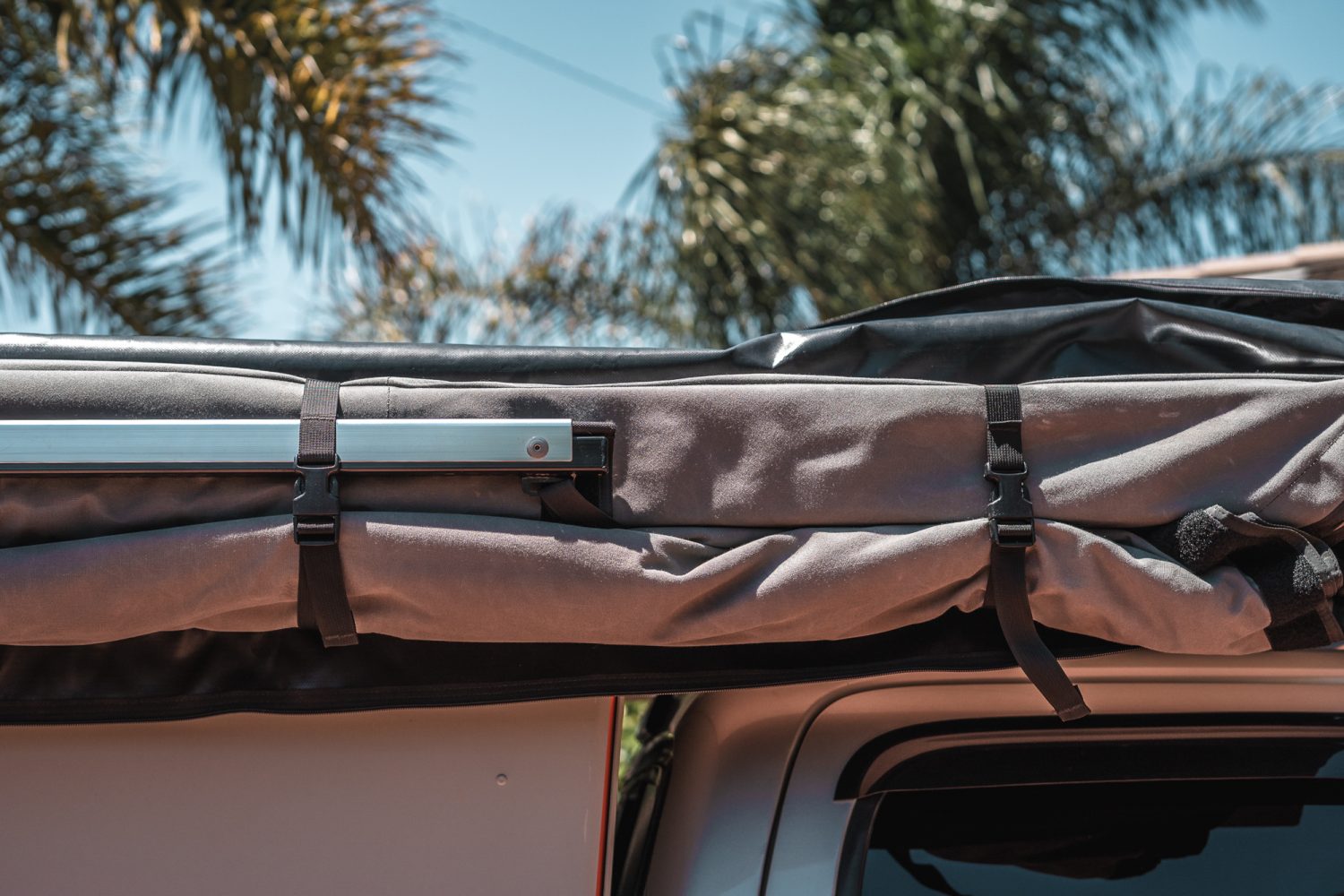 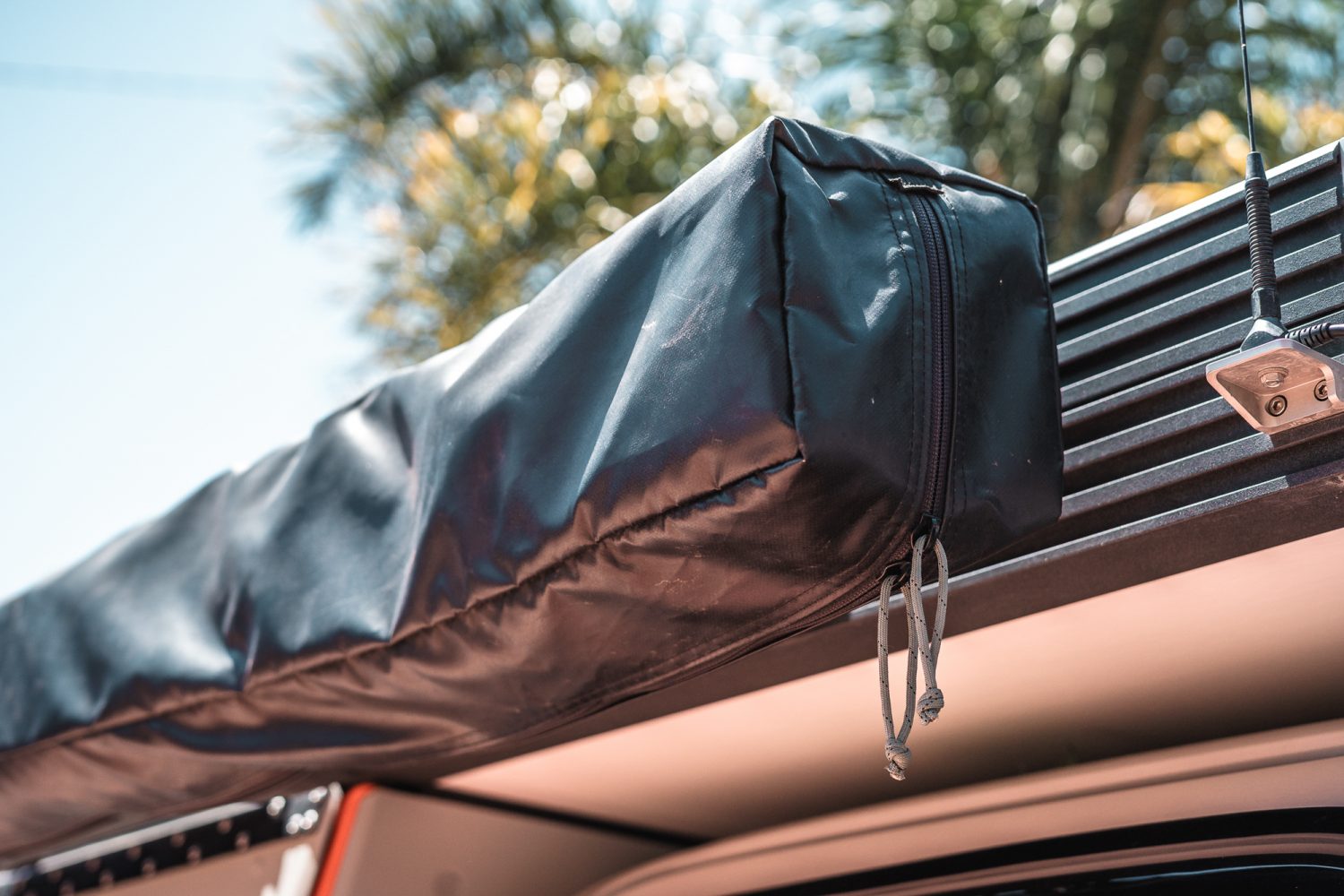 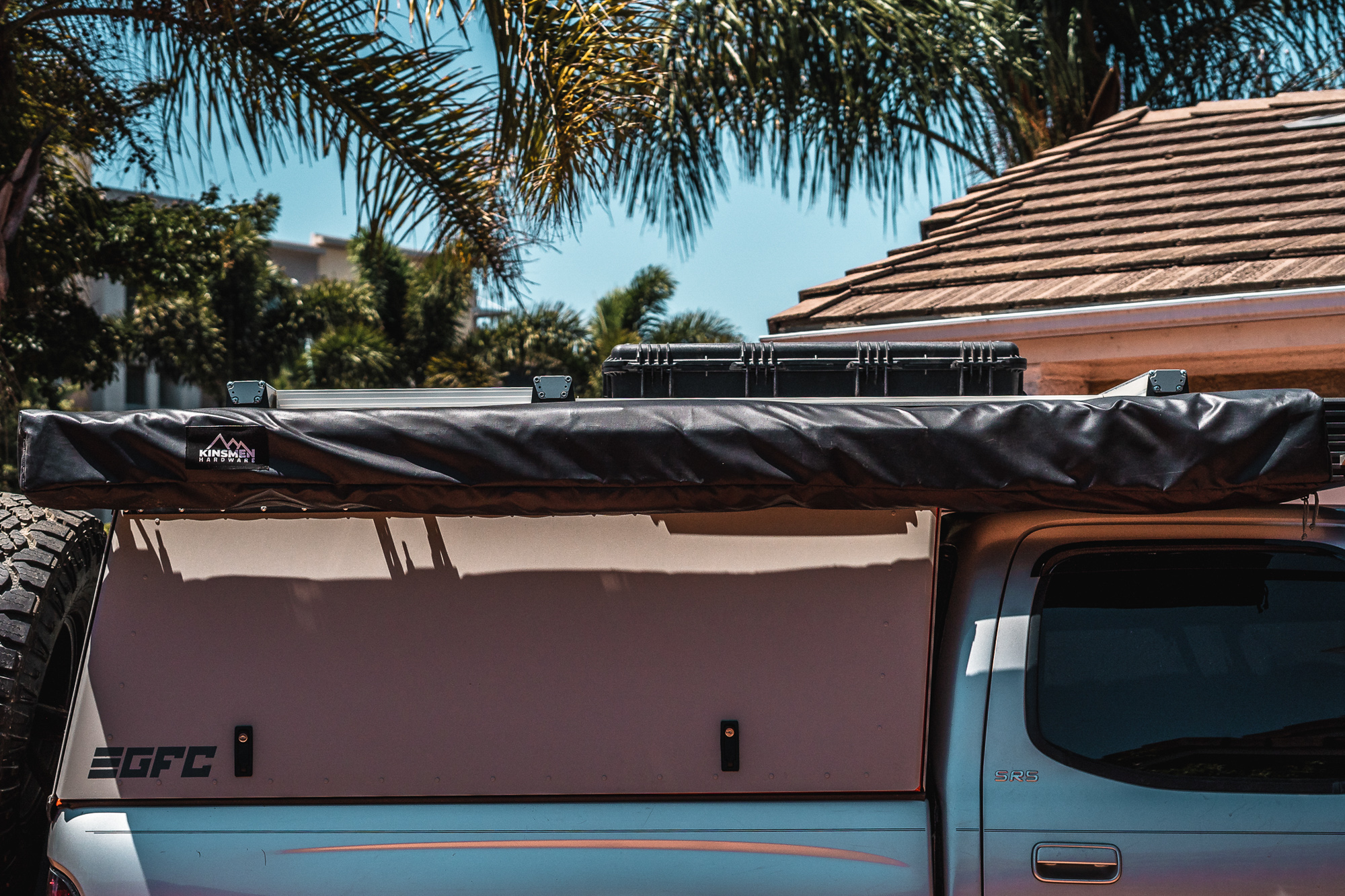 The awning does include mounting hardware, however, it is not available for every rack and camper platform on the market yet. Currently, there are four options available, which work with the Go Fast Campers’ extrusion, Front Runner Slimline Rack, Rhino-Rack Pioneer Platform and 1-, 1.25-, 1.5- inch round tube which works for most Gobi Stealth, Baja Exp, or Utility flat 1” round tube roof racks.

Of course, no product is perfect, and this awning is no exception. One of its two drawbacks which were already mentioned is weight. For the added strength of steel and the advantage of its relatively compact packed size (91 x 7 x 7 inches), I think 10 pounds is a small compromise. It is noticeable, though, and I am making adjustments to the truck to balance the weight better.

The other setback is the price. At $1,750, the Kinsmen is far from the budget option. When compared to the closest competition, the Alucab Shadow-Awn, it is $250 more expensive. At least it is on the surface. If we really compare apples to apples though, the Alucab does not include mounting hardware, which will fetch anywhere from an additional $119 for their tent mounts to $285 for the Bajarack mounts. That shockingly levels the playing field, and can even make the Kinsmen a hair cheaper. At the end of the day though, it is still expensive, but I feel it’s also worth it. The Kinsmen is a well-engineered product made right here in the USA, and I could not be happier with it.

To learn more about the Kinsmen 270 Awning, visit their website here. 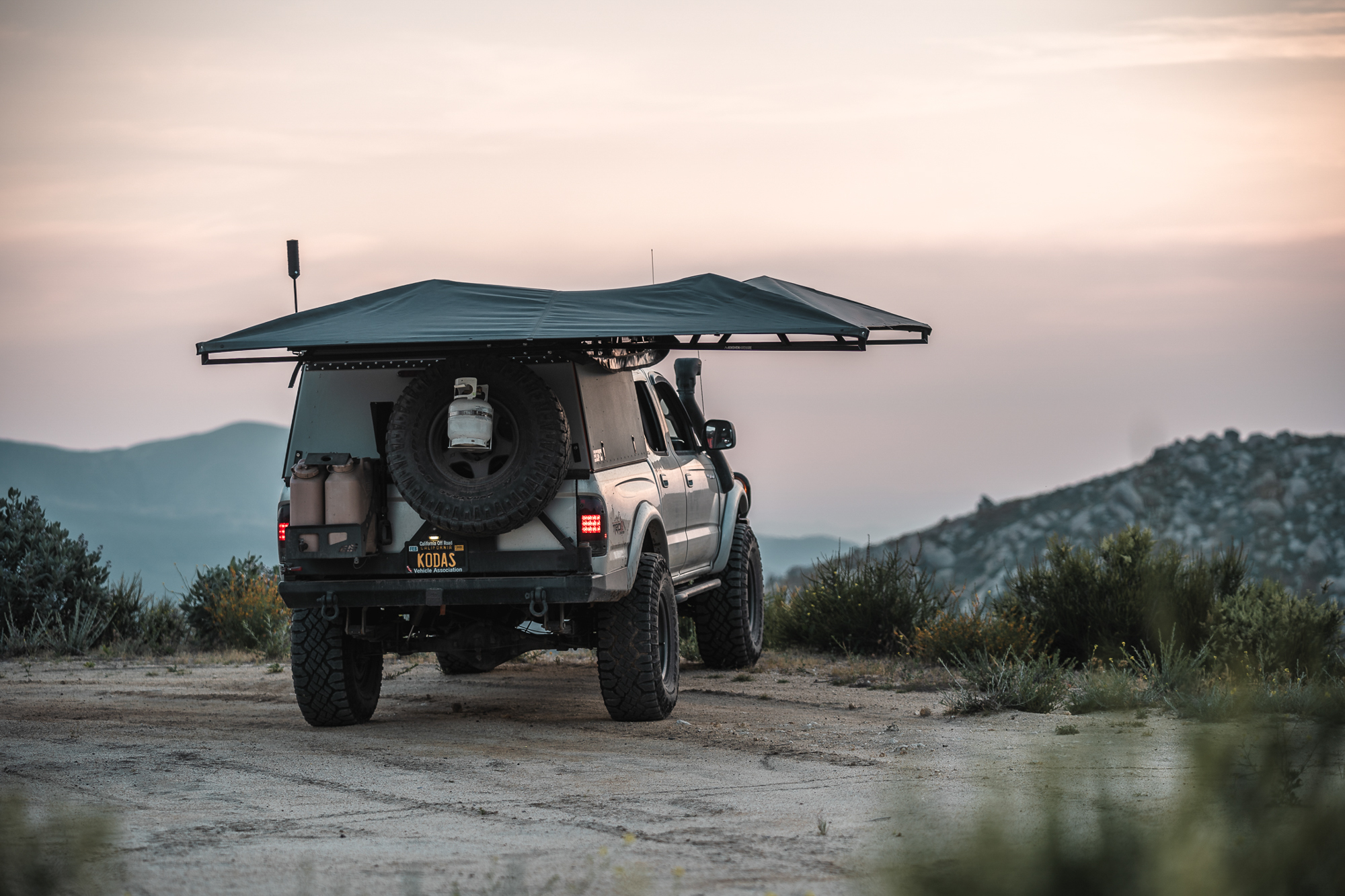 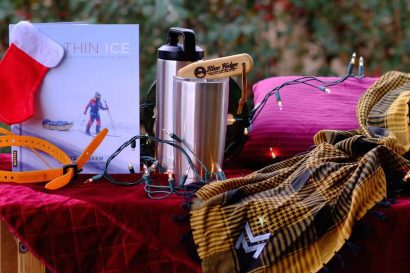 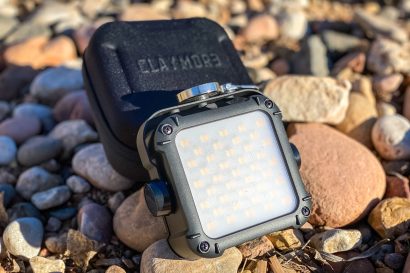 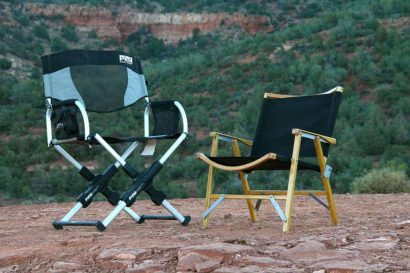 Head to Head: Pico vs Kermit