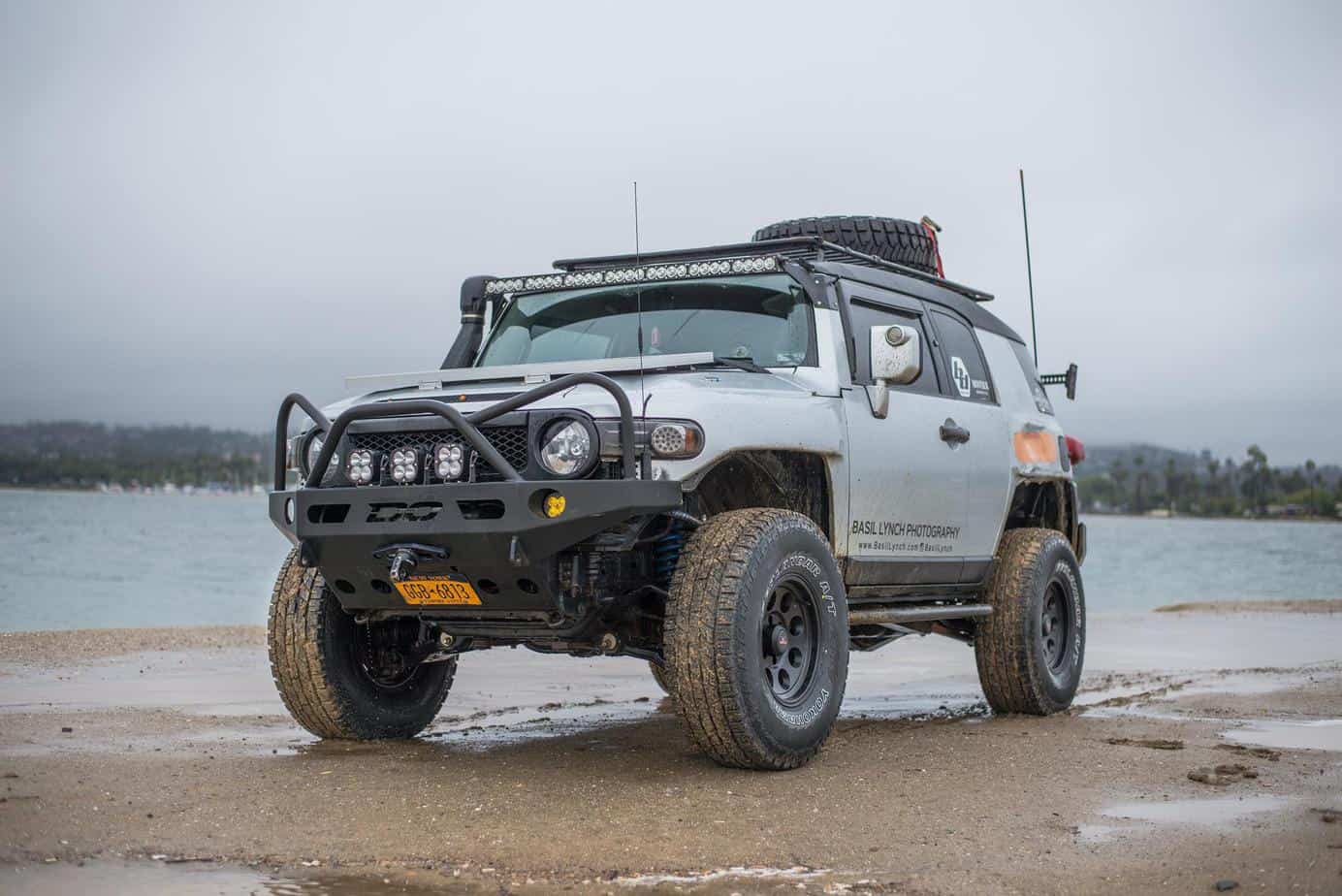 My plan was to drive to Colorado, I was meeting family in Telluride to celebrate the holidays. Before I left, I was asked by Discount Tire and Yokohama Tire to review the new Yokohama Geolandar AT G015, an all-terrain tire that was built to handle every situation you could throw at it. I decided to turn this trip into a full on tire review, testing the tire from the desert Southwest, up into the high rocky mountains. 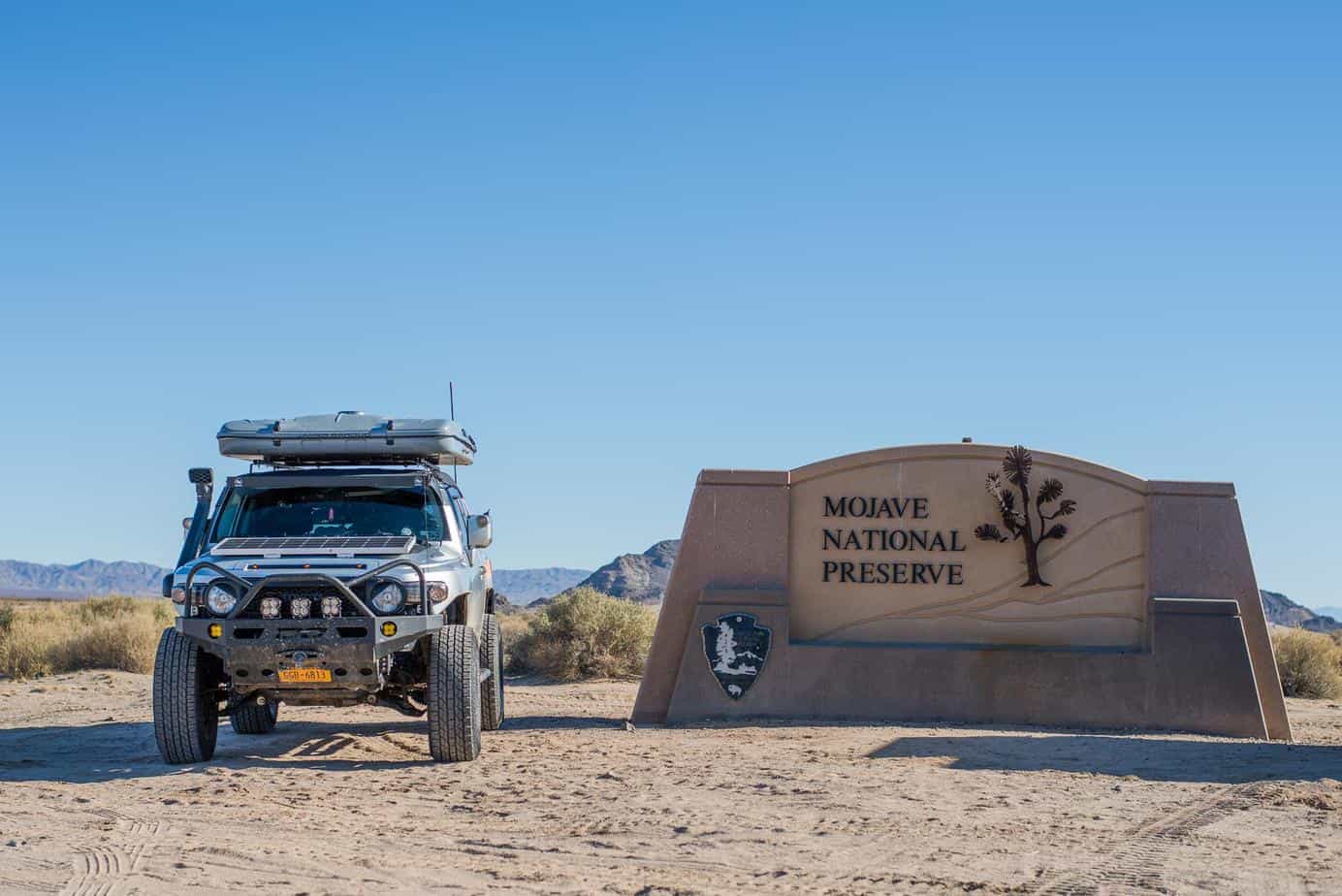 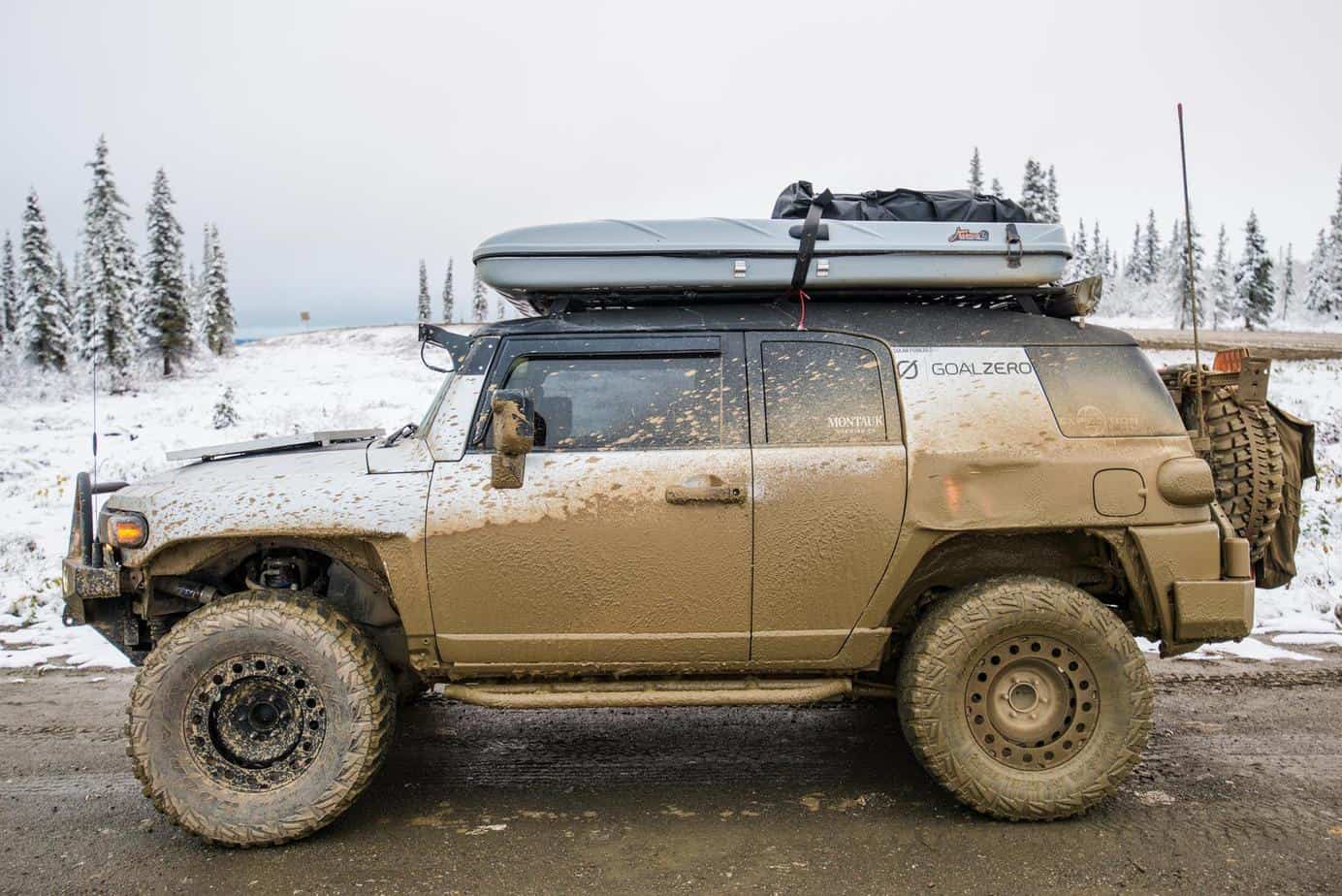 Basil’s previous set of Wranglers on beadlocks are pictured above.

Coming from an aggressive mud terrain tire, the difference was amazing. Driving on the highway was a completely different sensation, my FJ just felt planted. Not once did I have any feeling of my vehicle wandering across the lanes or grabbing the ruts in the road. Before, on my mud terrain tires, I would have to constantly steer the vehicle to keep it from wandering off the side of the road. With the Geolandars, I would let off the gas and my FJ would just keep rolling down the highway. Before I mounted the Geolandars, I would let off the gas and I would immediately feel a deceleration. This proved to help my gas mileage. I was averaging about 13-14 miles per gallon on the highway before the switch, i’m now getting roughly 16 miles per gallon. 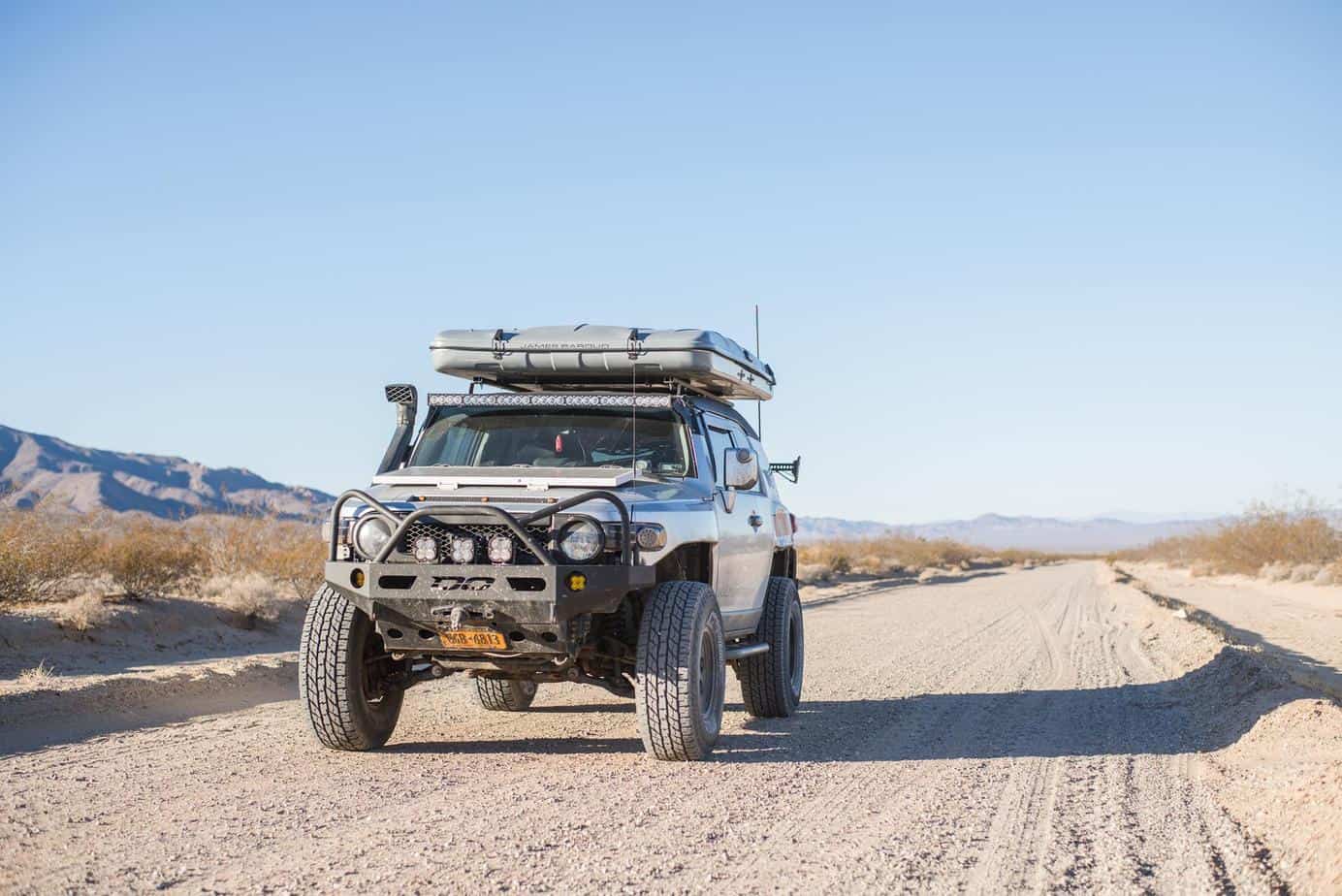 My first stop was the Mojave Desert, a classic southwest terrain that mostly consists of soft sand and hard pack dirt roads. While driving down an empty desert road, I decided to test the tire. I swerved from side to side, slammed on the brakes, and floored the accelerator pedal. The FJ definitely slid around a bit, but I never felt like I was out of control. The tires just grabbed the dirt roads. 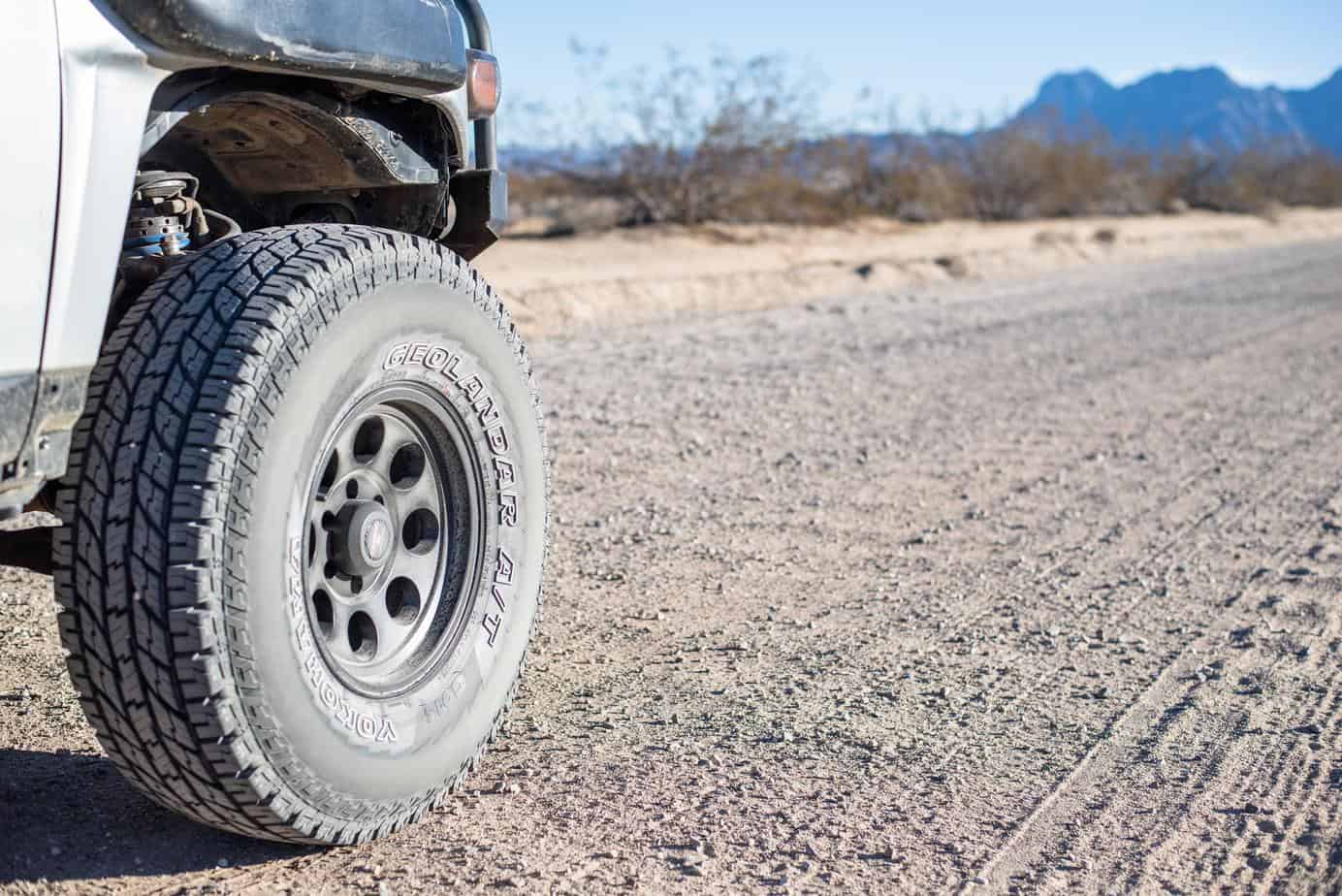 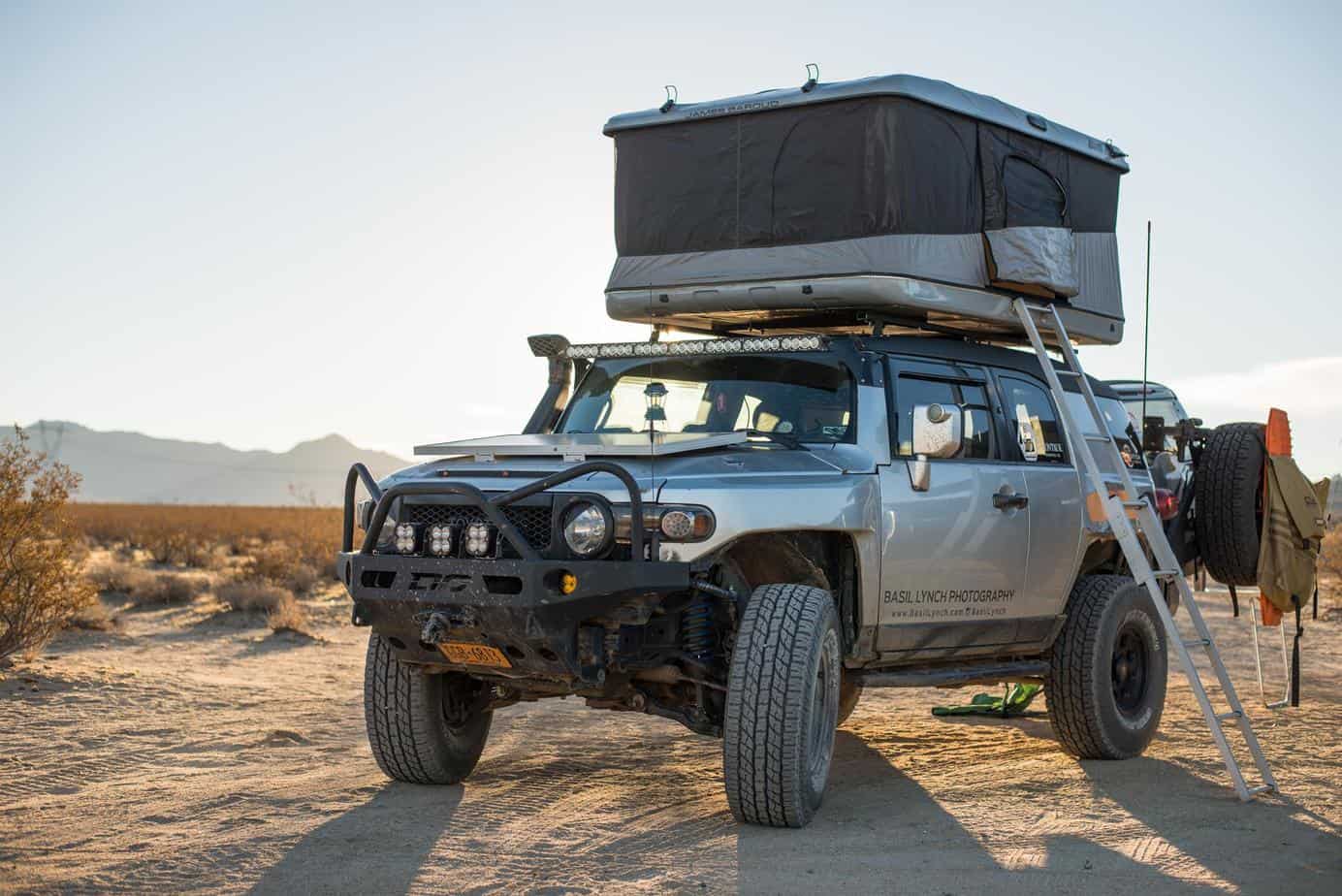 After a cold night camping, I packed up and hit the road. Today’s destination was Prescott, Arizona. About 300 miles of highway lay in front of me, I was excited to have my first big road day on the Geolandars. After a few hours of driving, I pulled over to fuel up. While pumping gas I realized I wasn’t exhausted. Normally after a few hours of driving, I would be slightly tired because of the constant small steering corrections. The Geolandars just went straight, they didn’t seem to care about what was happening on the surface of the road. I hopped back in and drove on, pushing to make it to Prescott before dark. 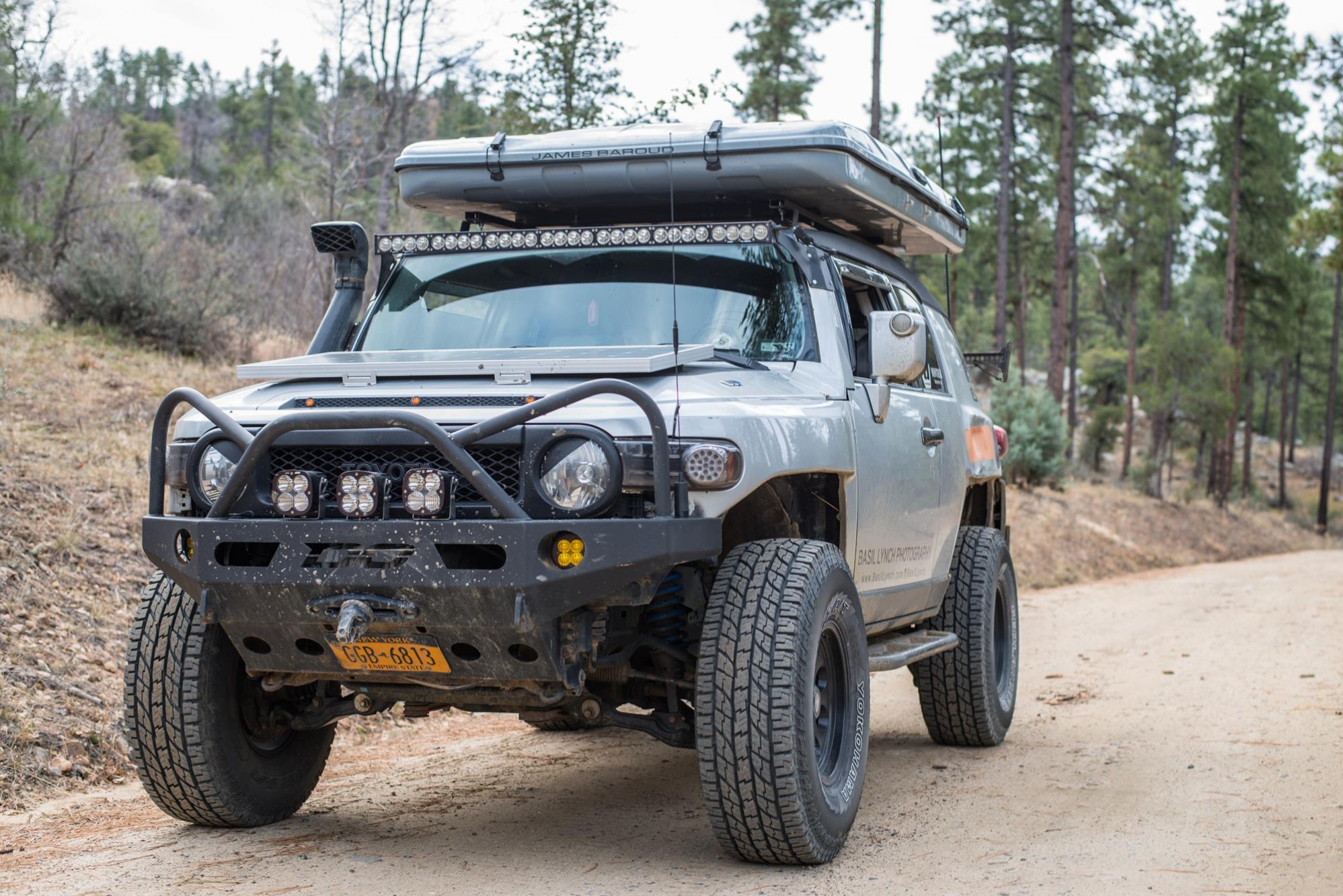 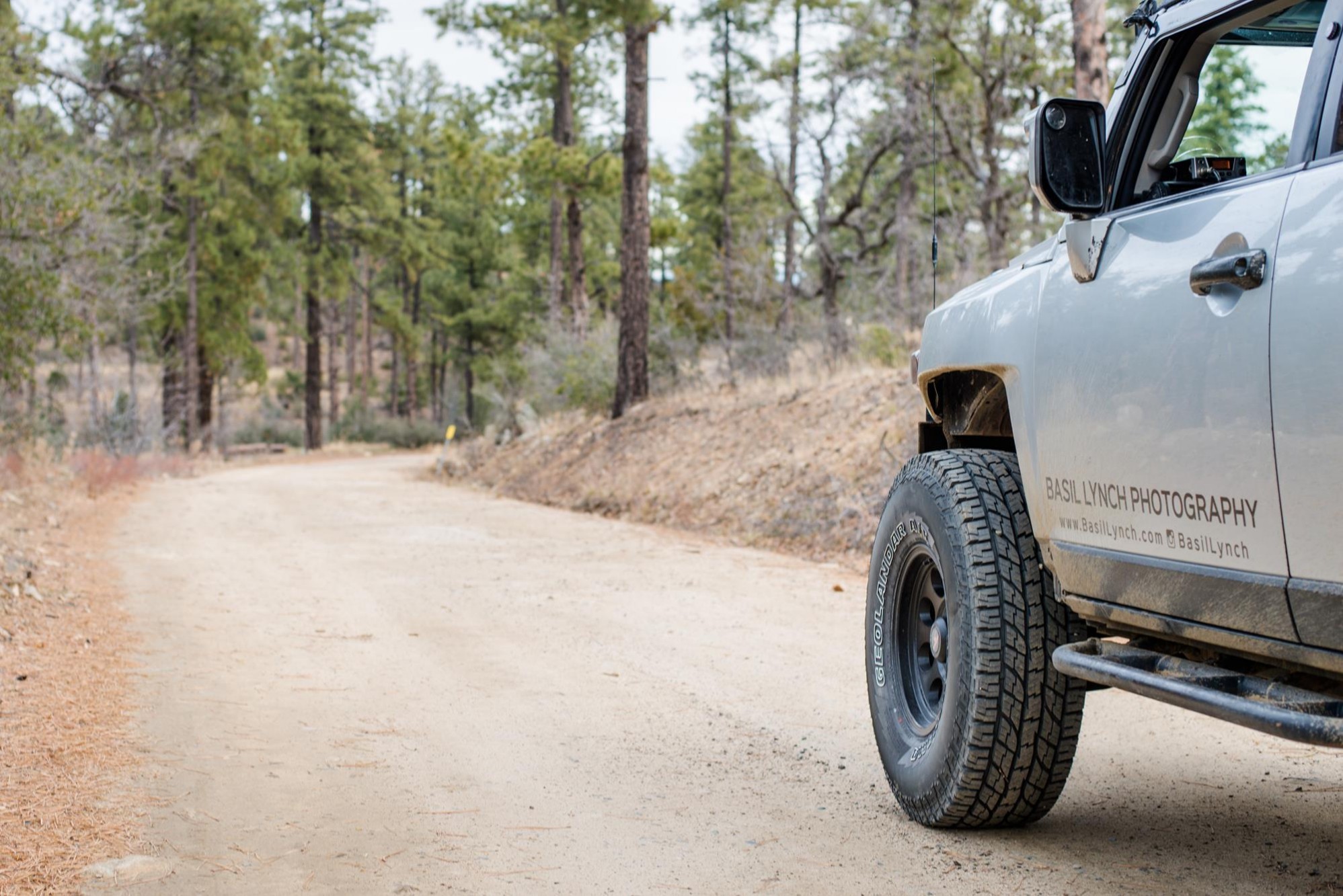 It was time to find a campsite. I found a small dirt road just north of town, aired down my tires, and went in search of a spot to set up camp. Climbing a pothole filled road would normally a bone jolting experience, not so much with the Geolandar ATs. Aired down it felt like I was driving on a pillow, just gliding over anything the road could throw at them. 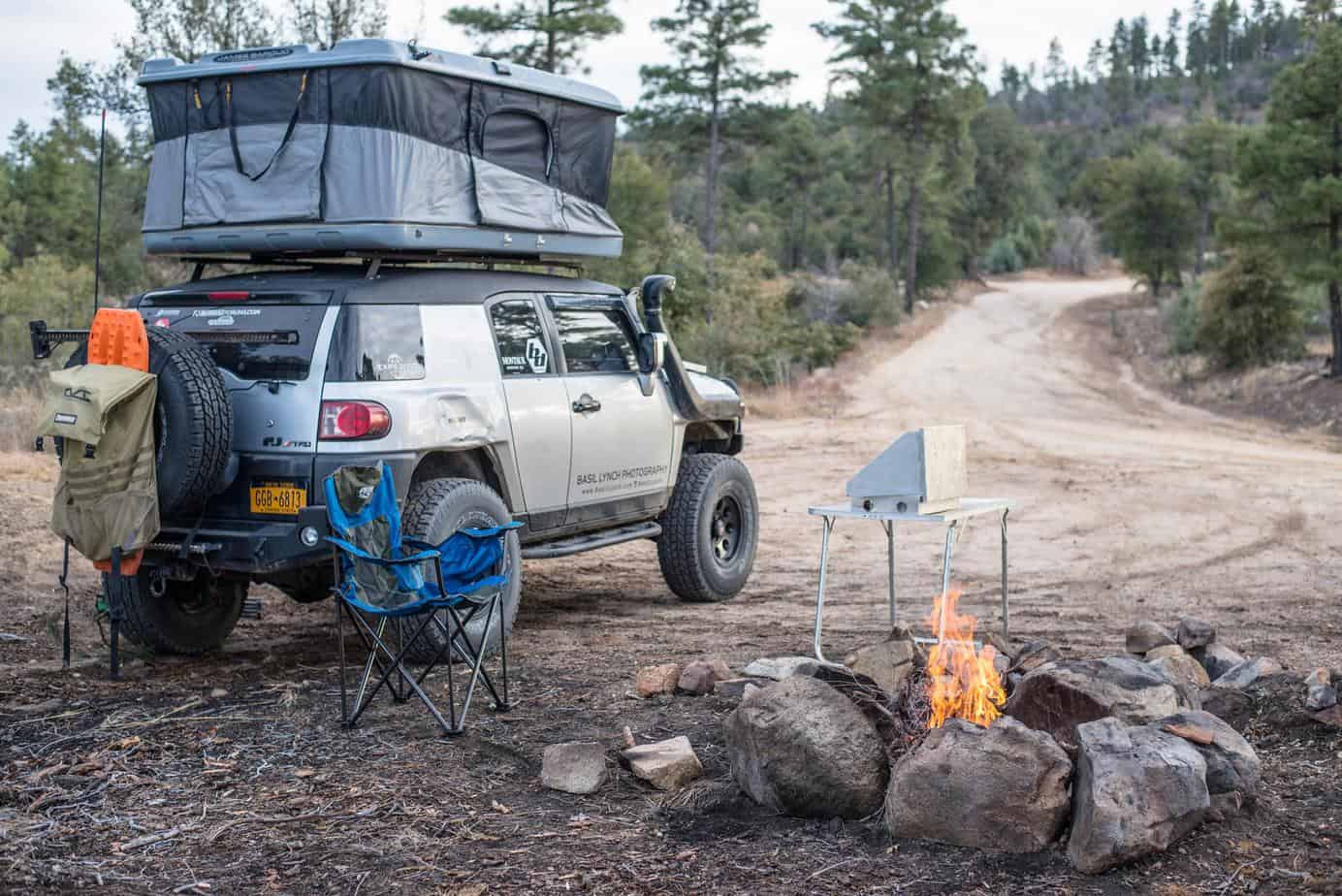 Camp was set up, the fire was lit, and I was ready to sit back and relax. I feel like one of the biggest challenges for anyone exploring is finding a good campsite, most of the time I just pick a dirt road and drive until I find a spot I like. I think that worked out pretty well this night. 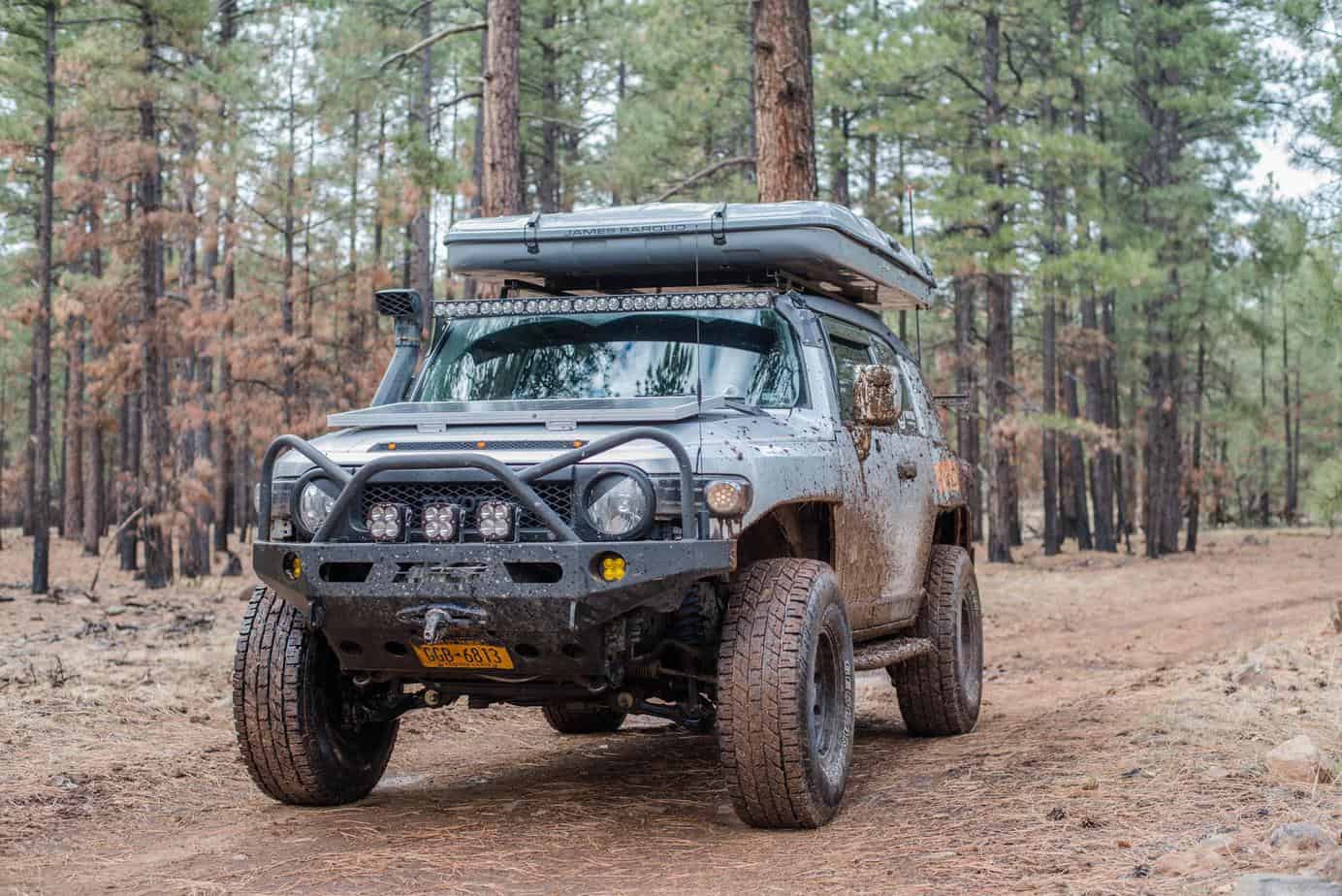 Today was another long haul, about 450 miles of roads, so I packed up and hit the road. While driving north towards Sedona, AZ ;it’s hard to resist not pulling off the highway and exploring the miles of forest roads. A recent snowmelt caused the pine needle covered dirt roads to become a muddy mess. Normally I’d avoid mud at all costs, but with a new set of tires I went for it, wanting to push the tires to their limits. 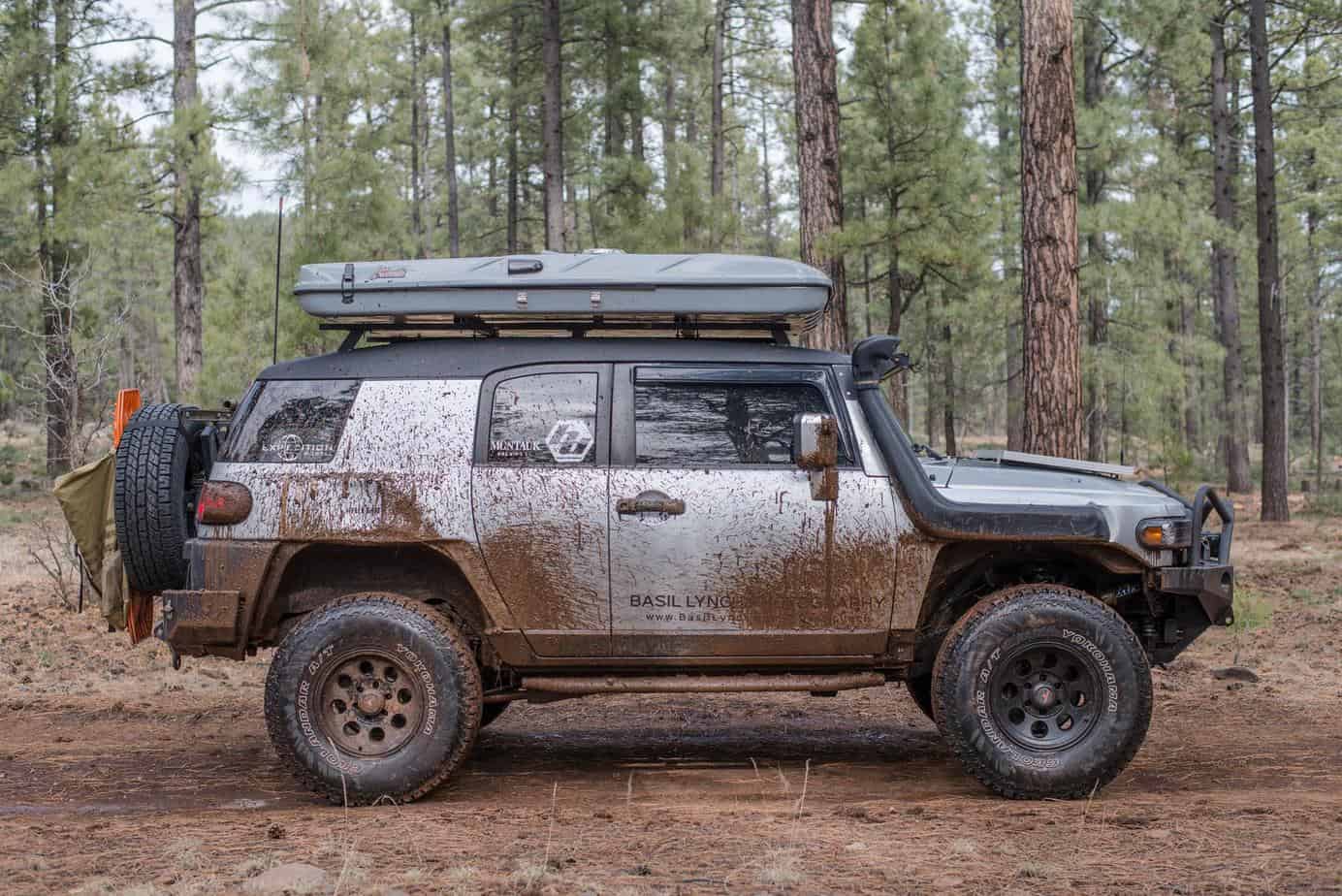 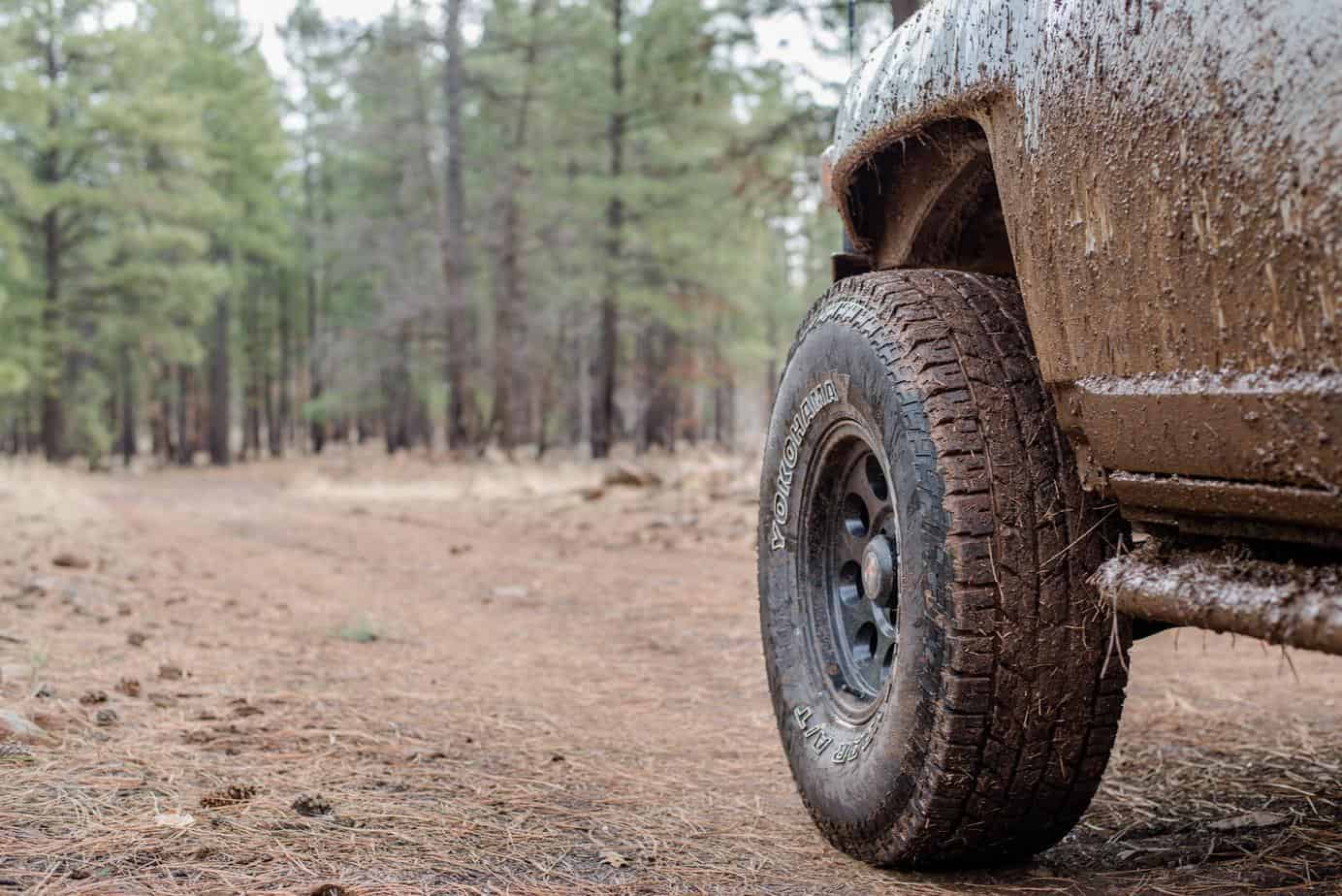 While driving the muddy roads, I was expecting to be slipping and sliding. Somehow the tires just held, I wasn’t even aired down. I was able to keep the FJ in two wheel drive and just move right along. The real test came when I found my first small mud pit, I threw it in 4 wheel drive and went for it. This was the first time I noticed the tires struggling, they just didn’t seem to be able to claw through the deeper mud. In the end, it wasn’t that big of a deal. I was able to make it through the deeper mud in one try, I just had to give it a bit more gas than I was used to with my previous mud terrains. 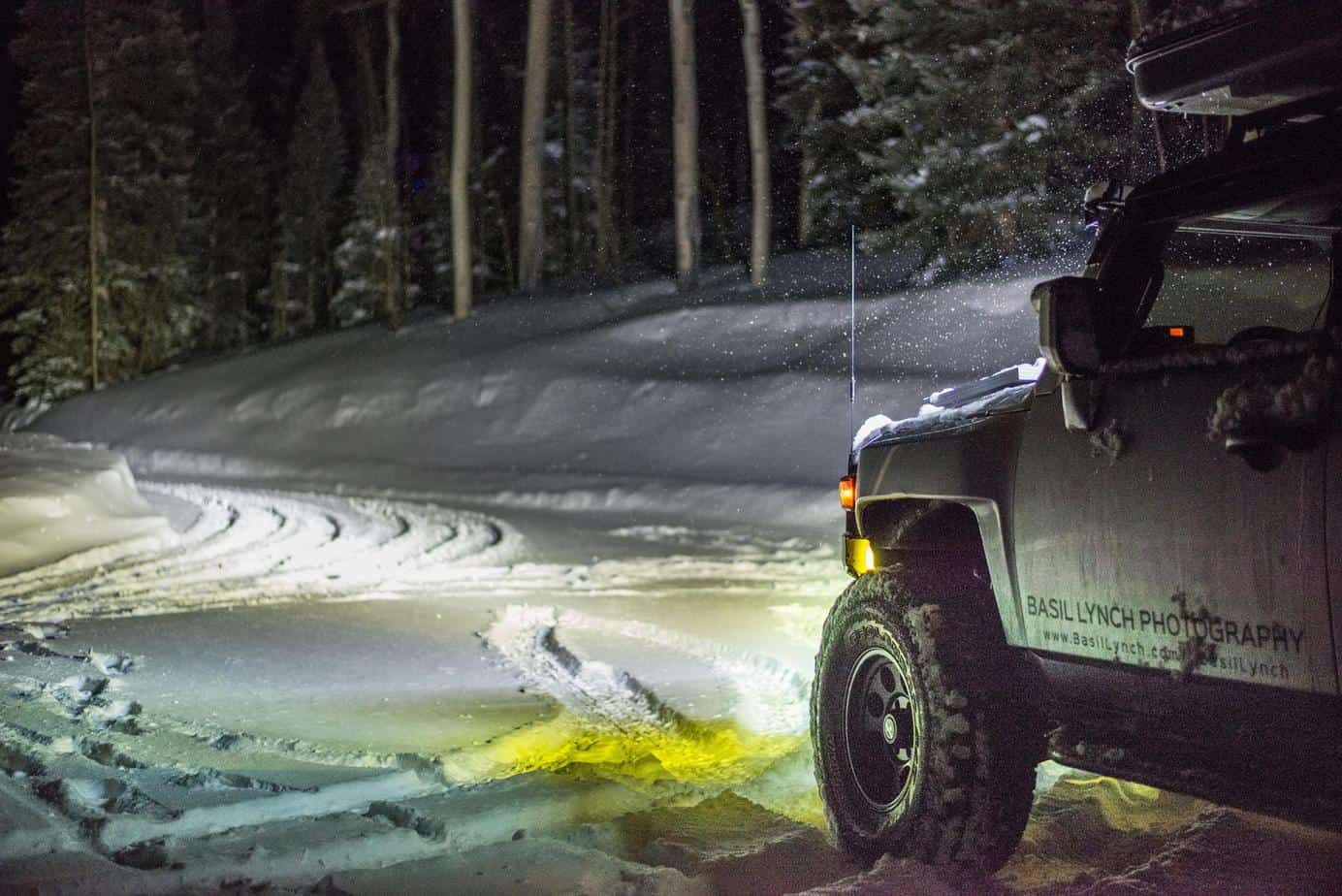 The final destination was Telluride, Colorado; A snowy paradise high in the Southwest rocky mountains. Driving Northeast on highway 145, I started to notice the temperature dropping and the snow building up on the shoulders of the road. It was late and I wanted to get to Telluride, I was probably going a bit too fast for the road conditions. I came around a corner and saw snow on the road, I slammed on the brakes to try and brush off a bit of speed before I hit the snow, but it was too late. I braced myself to slide off the edge of the road and into the guardrail, but that never happened, the FJ stayed planted and the tires did their job. I came out of the corner unscathed. If I were driving with my old mud terrain tires, I would have immediately slid into the guardrail, causing who knows how much damage to my truck. My first experience with the Geolandars in the snow was possibly a lifesaving one, right then and there. I was definitely excited to test the tires in the deep snow. 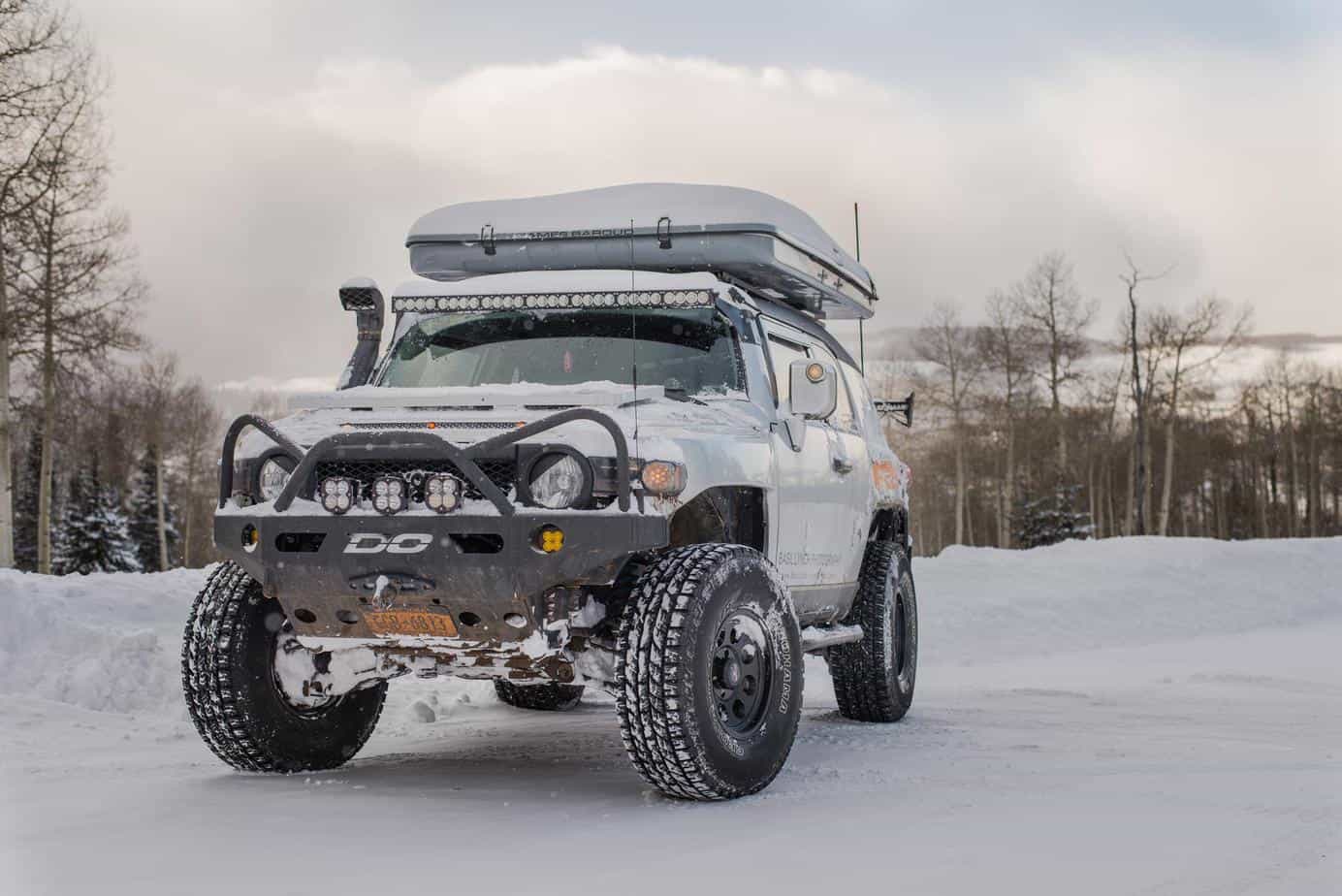 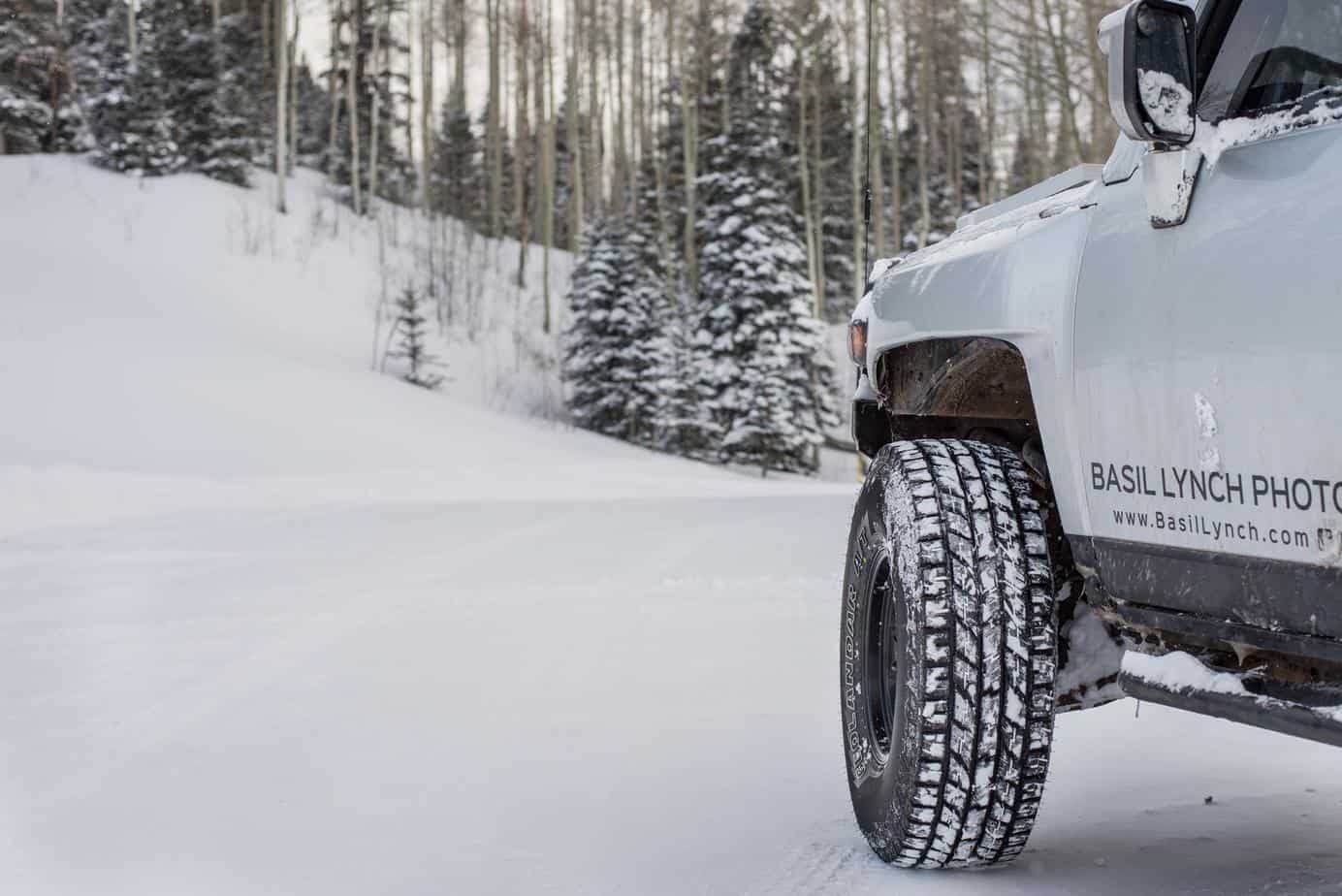 The day after I arrived, the town of Telluride received 16” of fresh snow, a perfect test for the tires. The house I was staying at was at the top of a mountain, at an elevation just over 10,000 feet of elevation, it got more than 16” of snow. I woke up early and hit the road, in search of unplowed roads. Coming from a mud terrain tire, i’m used to my tires sliding in hardpack snow, but with the Geolandars there was not much sliding at all. Of course this came as no surprise, as they are rated for severe snow service and handle accordingly. 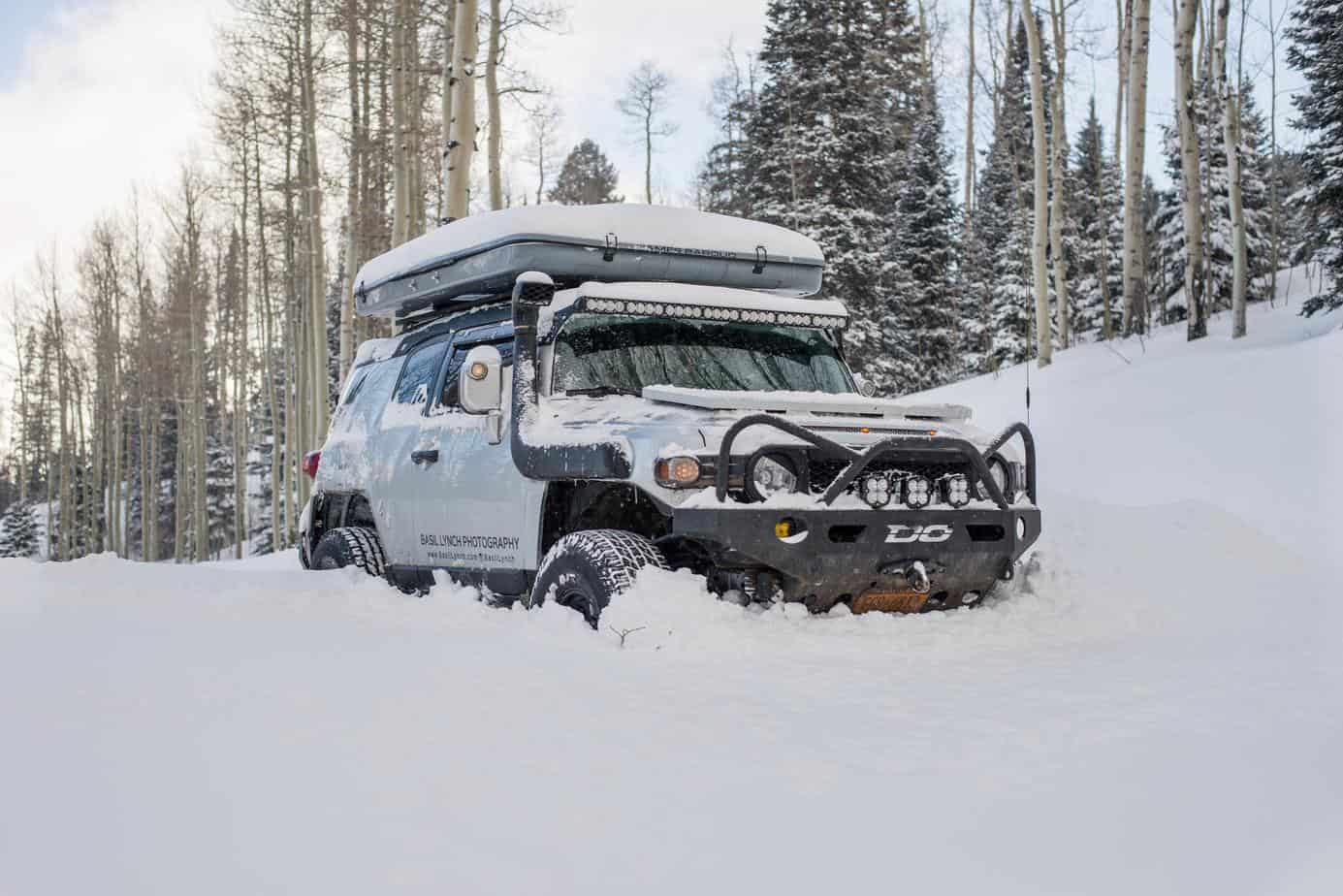 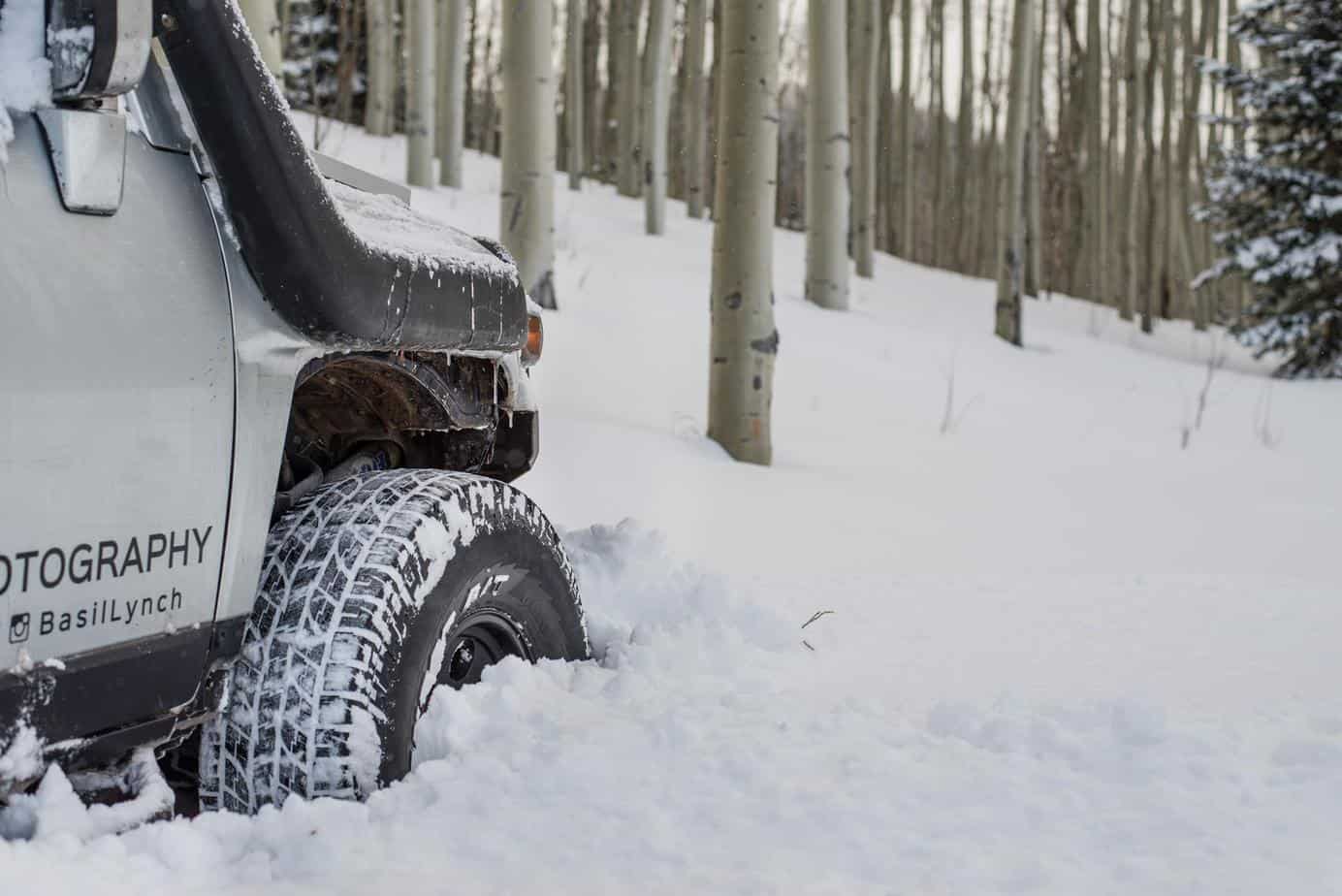 I found an unplowed road pretty quickly. I threw the FJ into 4 wheel drive, locked the rear differential, and went for it. After a few miles of driving in the deeper snow, I was still chuggling along, until I hit an uphill climb. I hit the gas to try and gain some speed and probably made it about halfway up the hill before I got stuck in a snow drift. I was high centered on my frame, this is the second time I noticed the tires struggling. The less aggressive tread and sidewall just didn’t want to grab onto the deeper snow and pull. I unstrapped my Maxtrax, and proceeded to easily back out of the situation. In the end I was very happy with their snow performance, even the most aggressive tires are going to struggle in a snowbank that’s 30” tall. 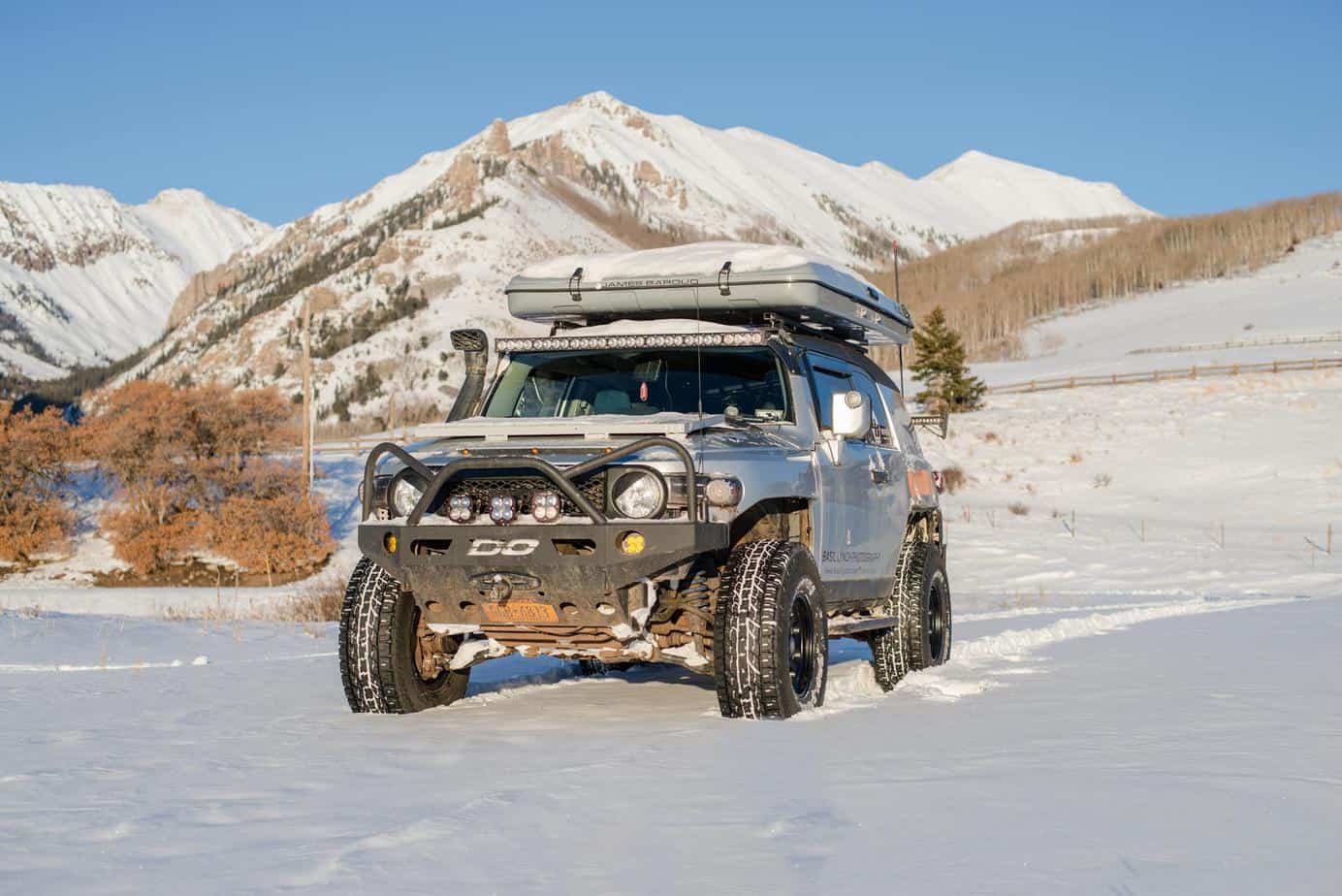 Overall, I was very happy with the Yokohama Geolandar AT G015s, they exceeded all of my expectations. I was able to put them through snow, mud, sand, and hard pack dirt roads. The only time I felt it struggling was in deeper snow or mud, but that’s almost expected out of a less aggressive tire. I highly recommend these tires to anyone that is going to be overlanding, they will handle everything you throw at them, while also providing an amazing ride on the asphalt and little effect on fuel economy. I just wish I had these tires mounted on my FJ Cruiser when I embarked on my 12,000 mile trip to Alaska, a journey where this sort of all-terrain excels. 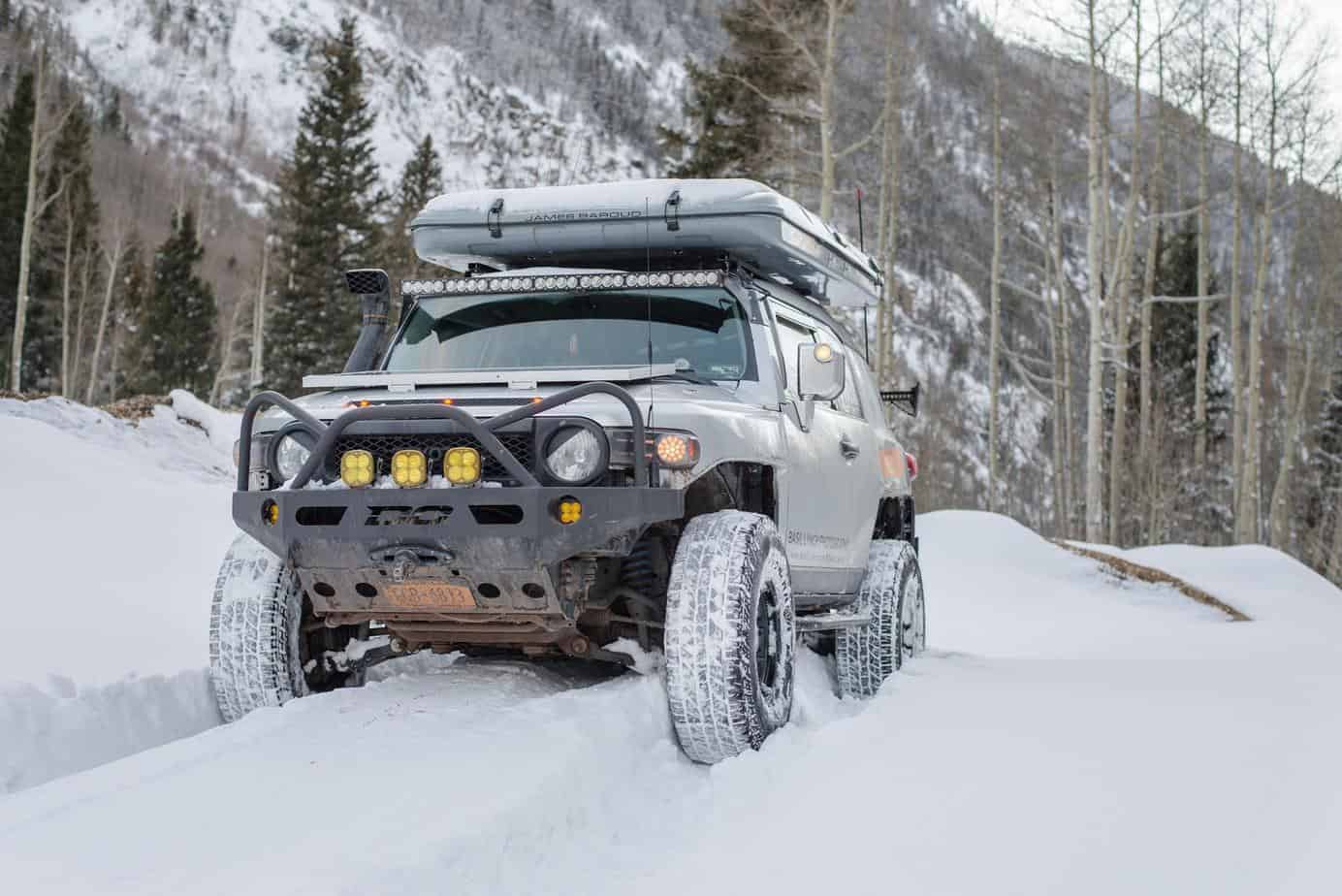