I discovered it on the local dealer’s lot—a used 2013 Jeep Wrangler Unlimited Rubicon. It had a cracked taillight, and the passenger front fender looked like it had been grazed, but it was clean and it checked all of the boxes: four doors, 3.6 Pentastar V6, updated interior, and the Rubicon’s standard fare of off-road enhancements.The Jeep was a more vibrant color than I usually preferred, but I had a soft spot for orange. It also notably featured a soft top with premium fabric. I wasn’t quite sure how I was going to outfit the vehicle with a sleeping platform, but with the burgeoning Jeep aftermarket, there was a plethora of options, so I wasn’t discouraged. While somewhat reluctant to reenter the world of car payments, I bit the bullet on this blank canvas of an overland vehicle. If it facilitated adventure as much as my previous Jeep did, it would be well worth the cost. Thus began a new chapter, coinciding perfectly with my 40th year. 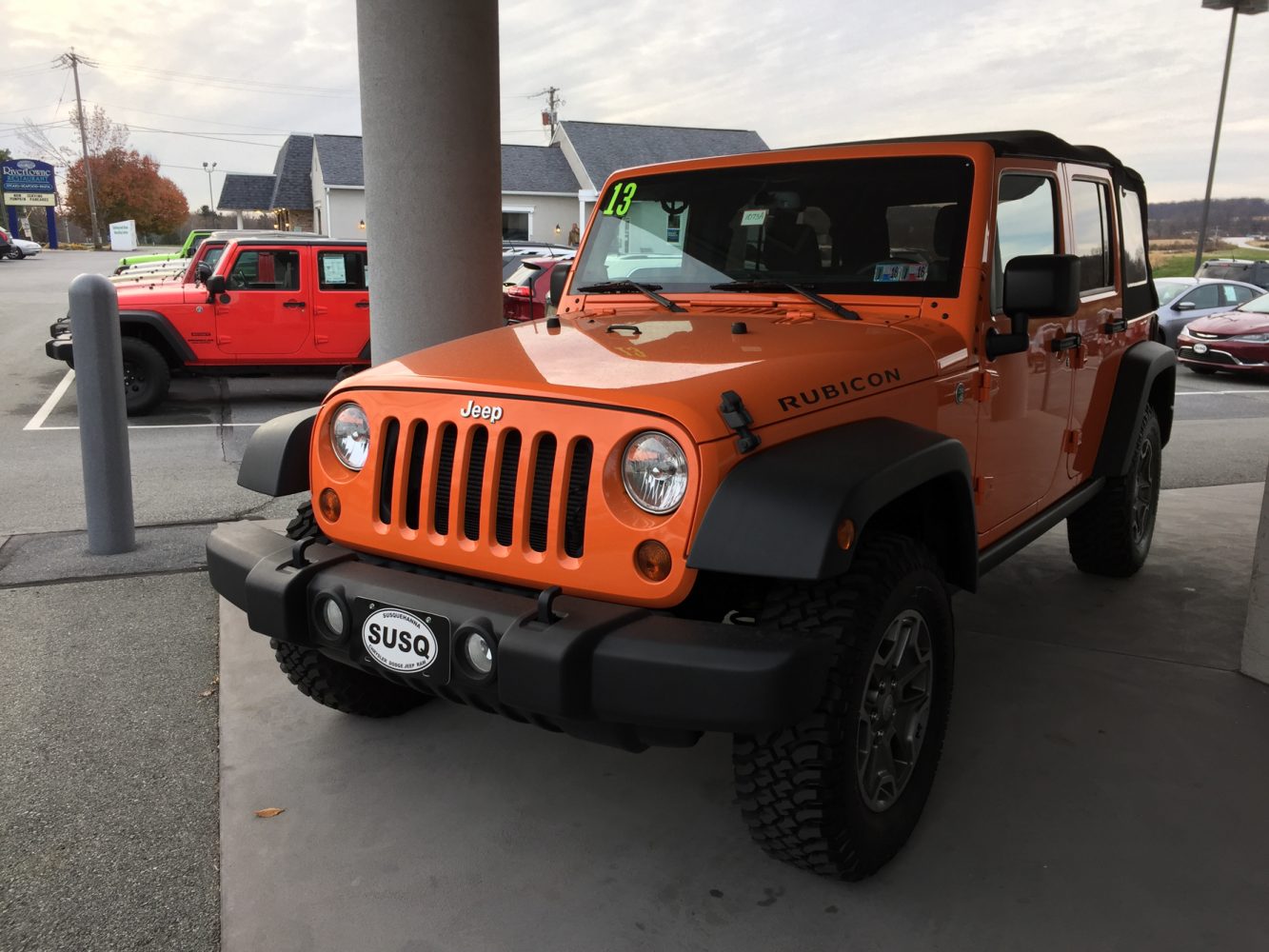 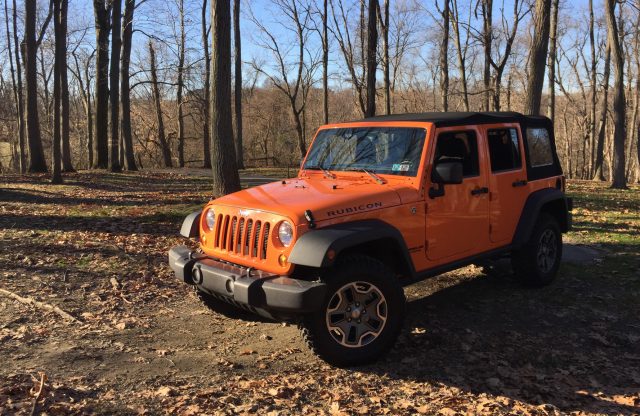 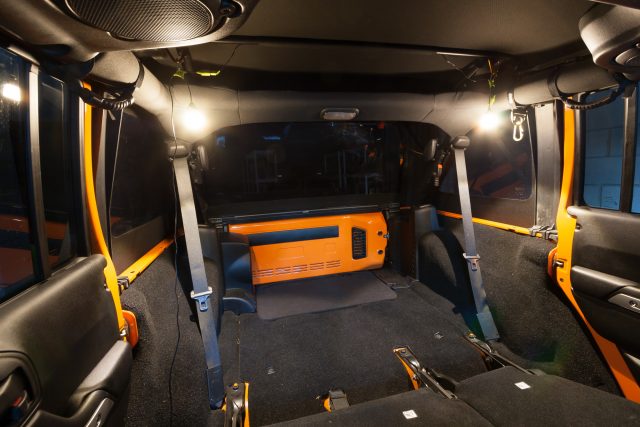 First things first. I already had a James Baroud Evasion Evolution hard-shell roof-top tent from my previous vehicle. It was a comfortable, easy-to-use, high-quality sleeping platform. So naturally, I wanted to carry it over to the new Jeep. This is where things got tricky. I wanted to preserve the soft top, and install the roof-top tent on an external rack. I was okay with not being able to lower the soft top, as I could still enjoy a profound open-air effect by removing the doors and all of the surrounding windows. I chose to install a Kargo Master Safari Congo Pro roof rack over the soft top, upon which I installed my roof-top tent. In addition, I added an ARB 2500 awning to the assembly. This whole setup was complete rubbish. 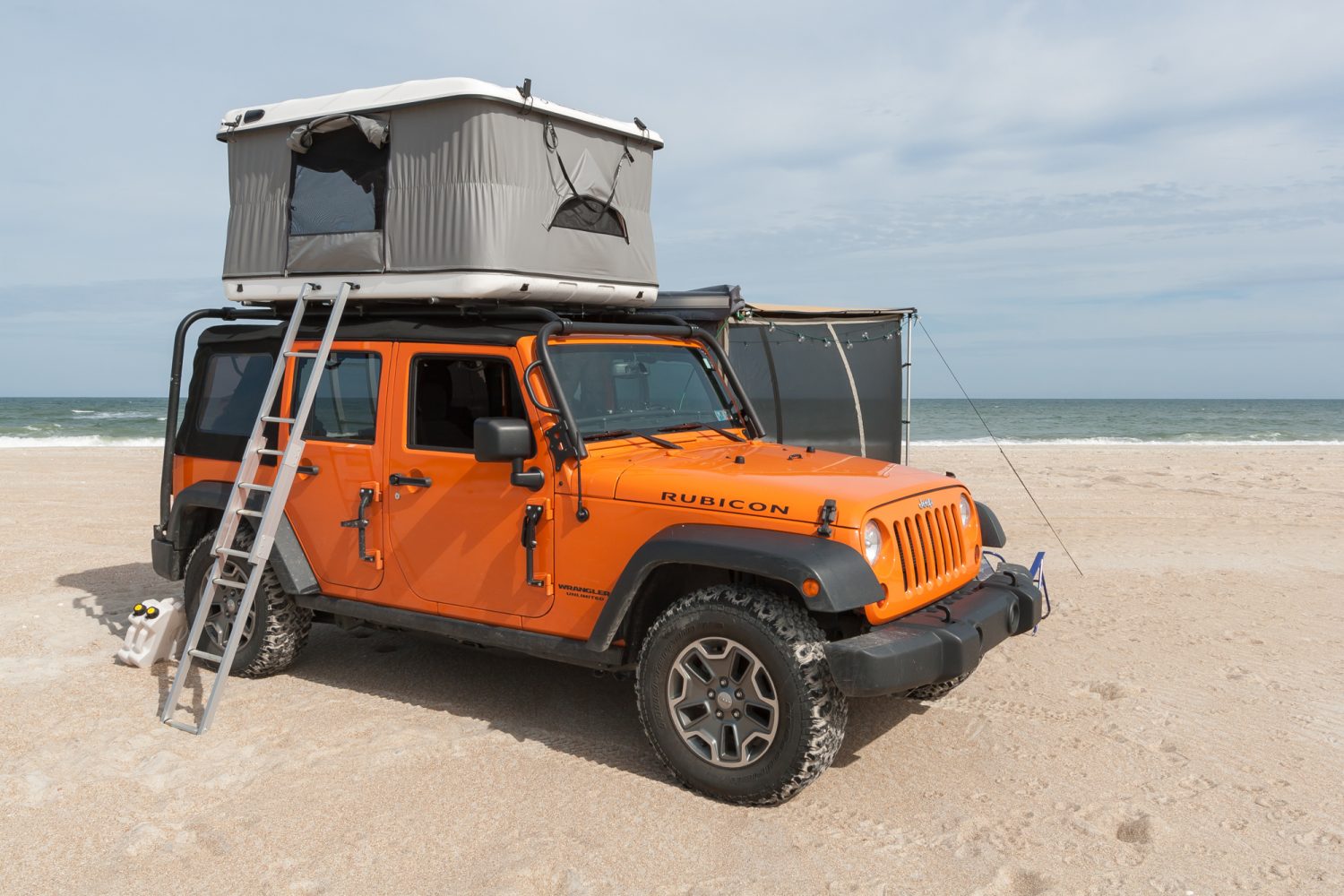 As a product, the James Baroud was fine, as was the Kargo Master Safari rack. What was horribly flawed was my implementation. First, the bulk of the setup was comically excessive. It looked far less elegant than a safari-going Defender 110, adorned with tubing and gear, and more closely resembled children’s playground equipment. Second, my ornate roof rack configuration disrupted airflow so greatly that it caused my soft top to flutter deafeningly at almost all speeds. This resulted in an overland vehicle that was very unpleasant to drive, which greatly exacerbated driver fatigue. Comfort is paramount, and should never be sacrificed for capability. Subsequently, I stopped, admitted to myself that I had made a mistake, reversed my modifications, and reconsidered my build strategy. 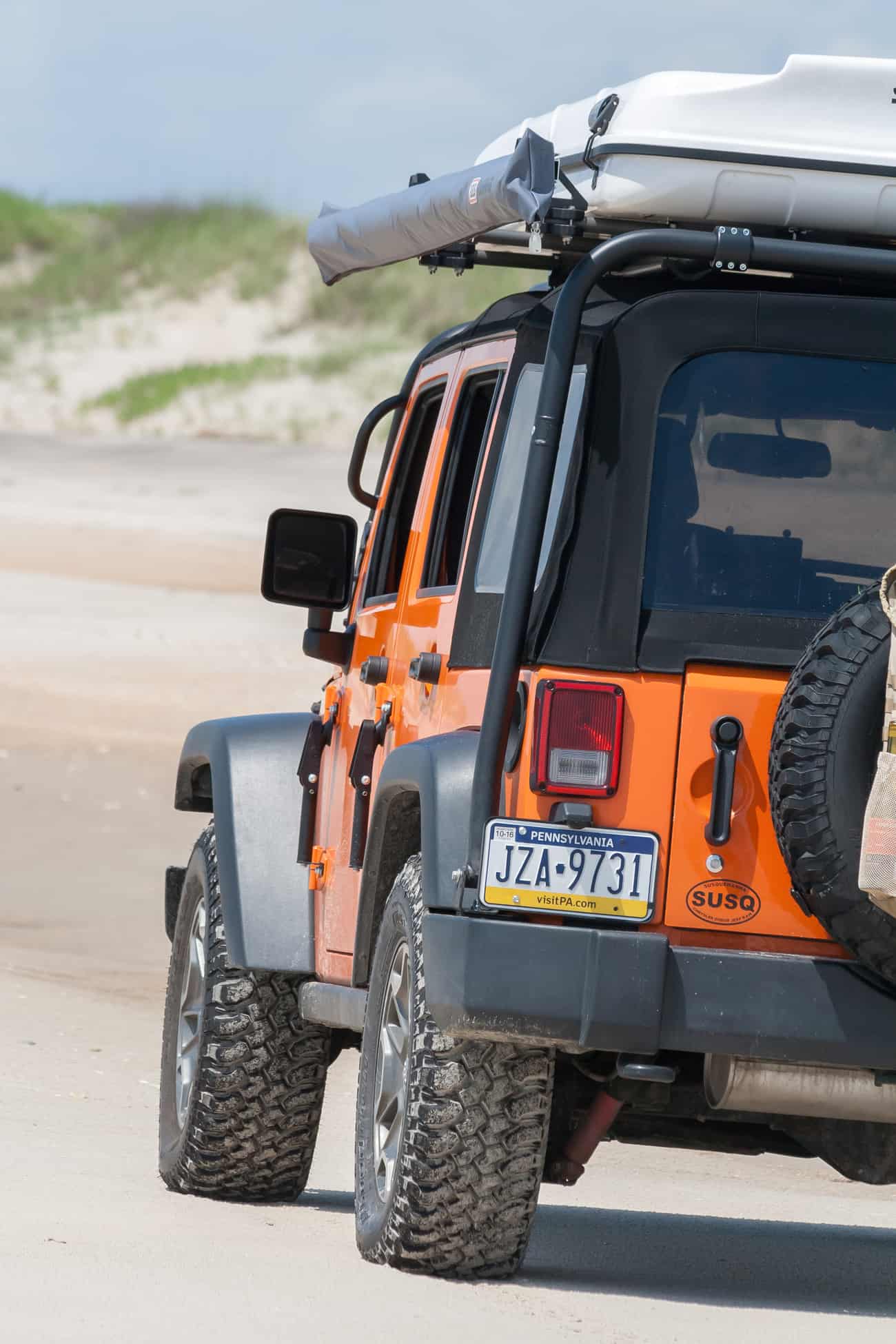 In the spirit of doing it right the second time, I sold my James Baroud roof-top tent, and ordered a J30 camper top from Ursa Minor Vehicles. This is a whole replacement hard top for the four door Jeep Wrangler with an integrated pop-up camper, visually similar to the pop-up on a Volkswagen Westfalia. This would add a comfortable and spacious sleeping platform to the Jeep with minimal compromise. Ursa Minor campers are built to order, and it took a few months after placing my order to take delivery. Once installed, the Jeep was transformed beyond my expectations. 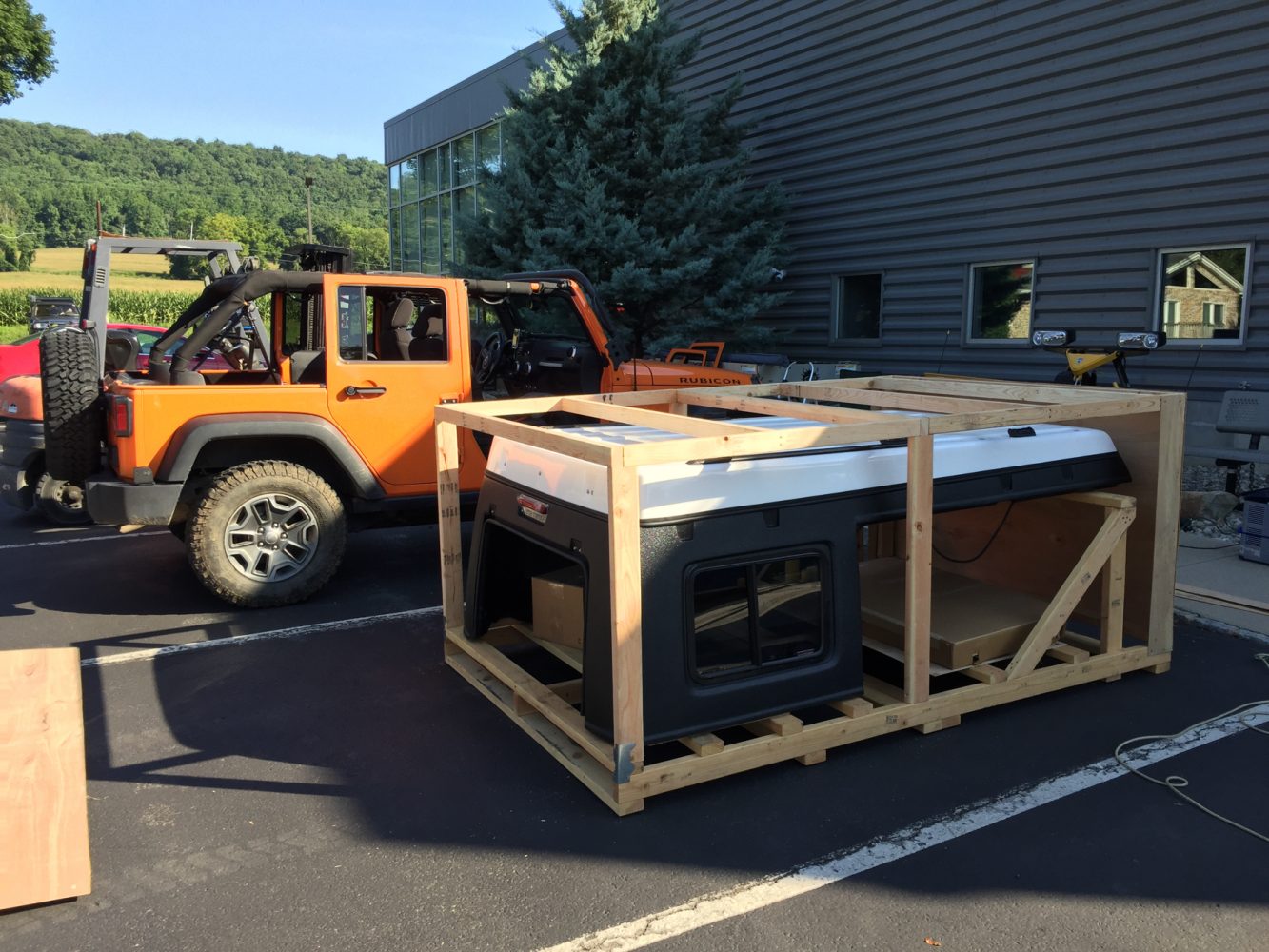 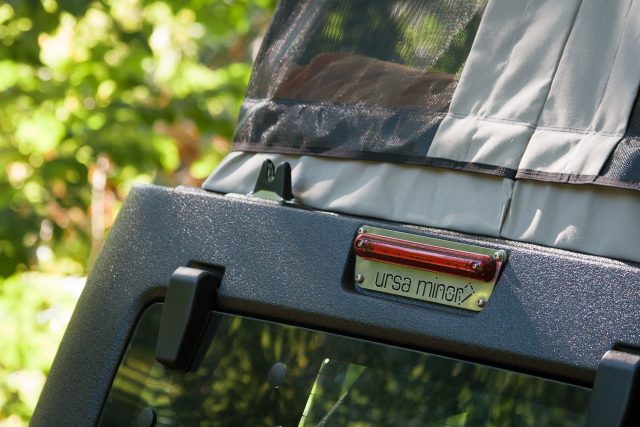 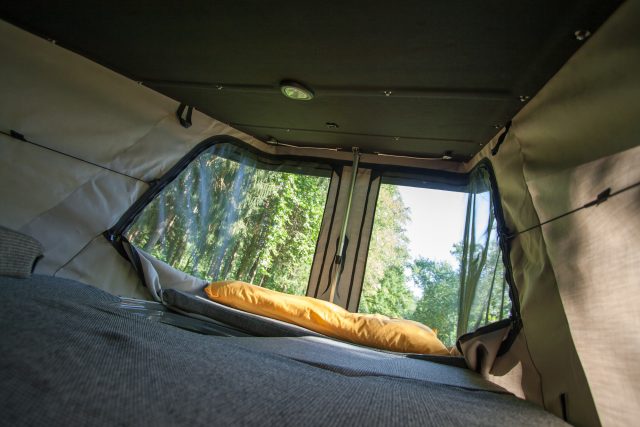 This was not the glorified roof-top tent that I was expecting. It featured interior access via two removable panels, so that the sleeping compartment could be accessed without exiting the vehicle. Initially, I thought this feature would amount to little more than a novelty, but it dramatically altered the formula, causing me to perceive the interior of the Jeep as “living space” as opposed to simply storage space. The functional hub of the platform shifted from the tailgate, which is common amongst most overland builds, to the back seat area. A series of fixed drawers and boxes in the cargo area is no longer ideal, as they can’t (in most cases) be accessed from the interior. This paradigm shift, prompted by the interior-accessible design of the Ursa Minor J30, has become the basis for my revised build philosophy and has greatly enhanced how I utilize the Jeep. 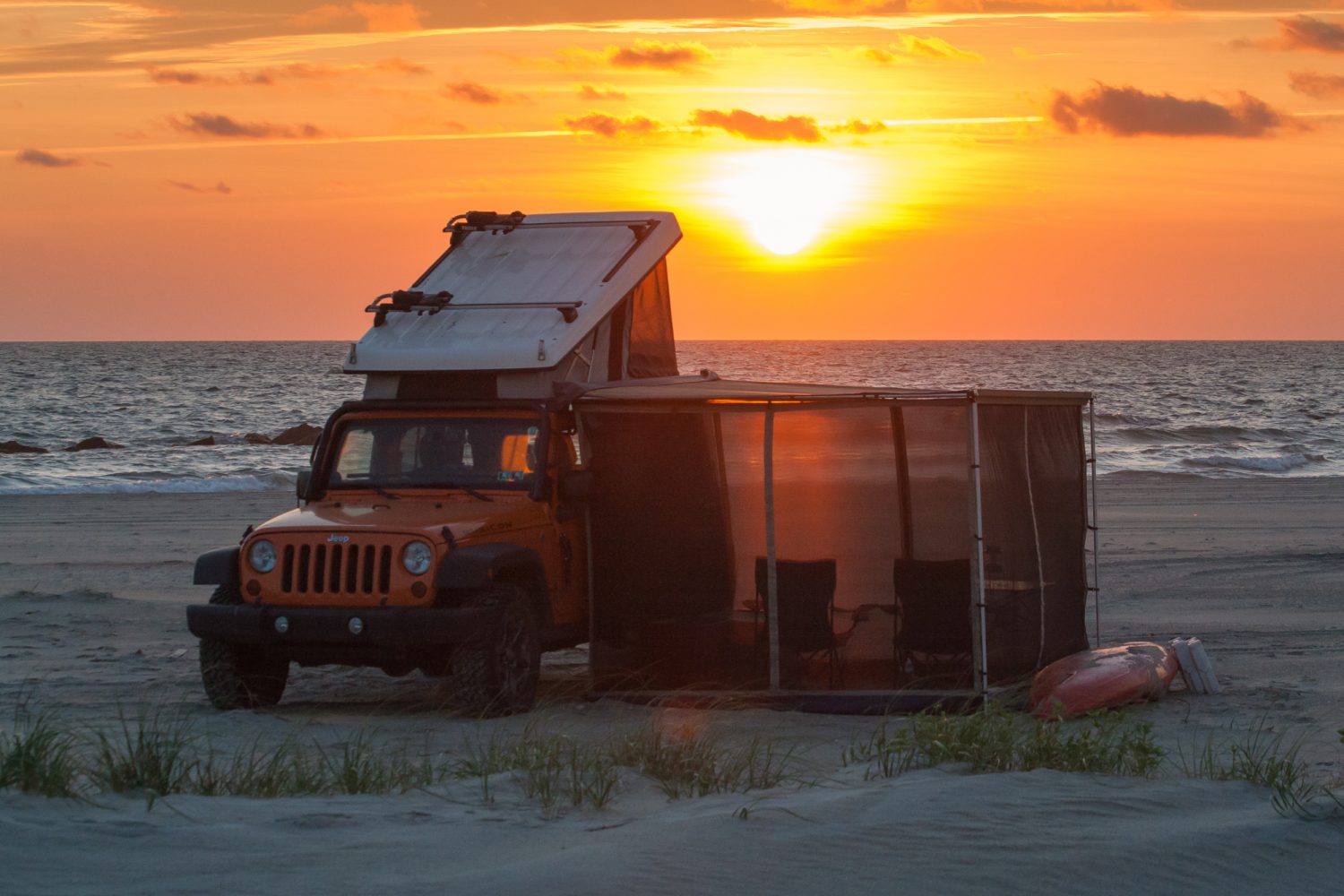 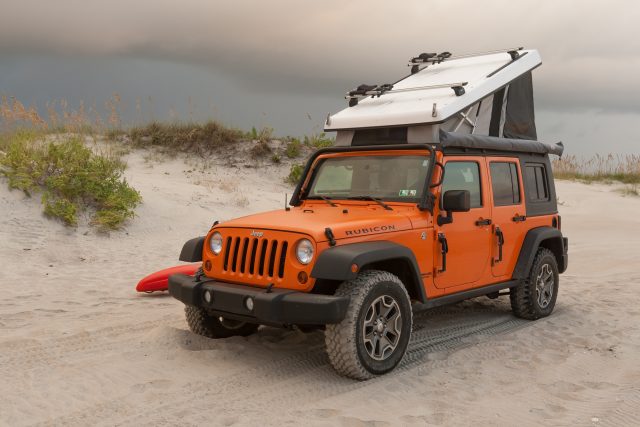 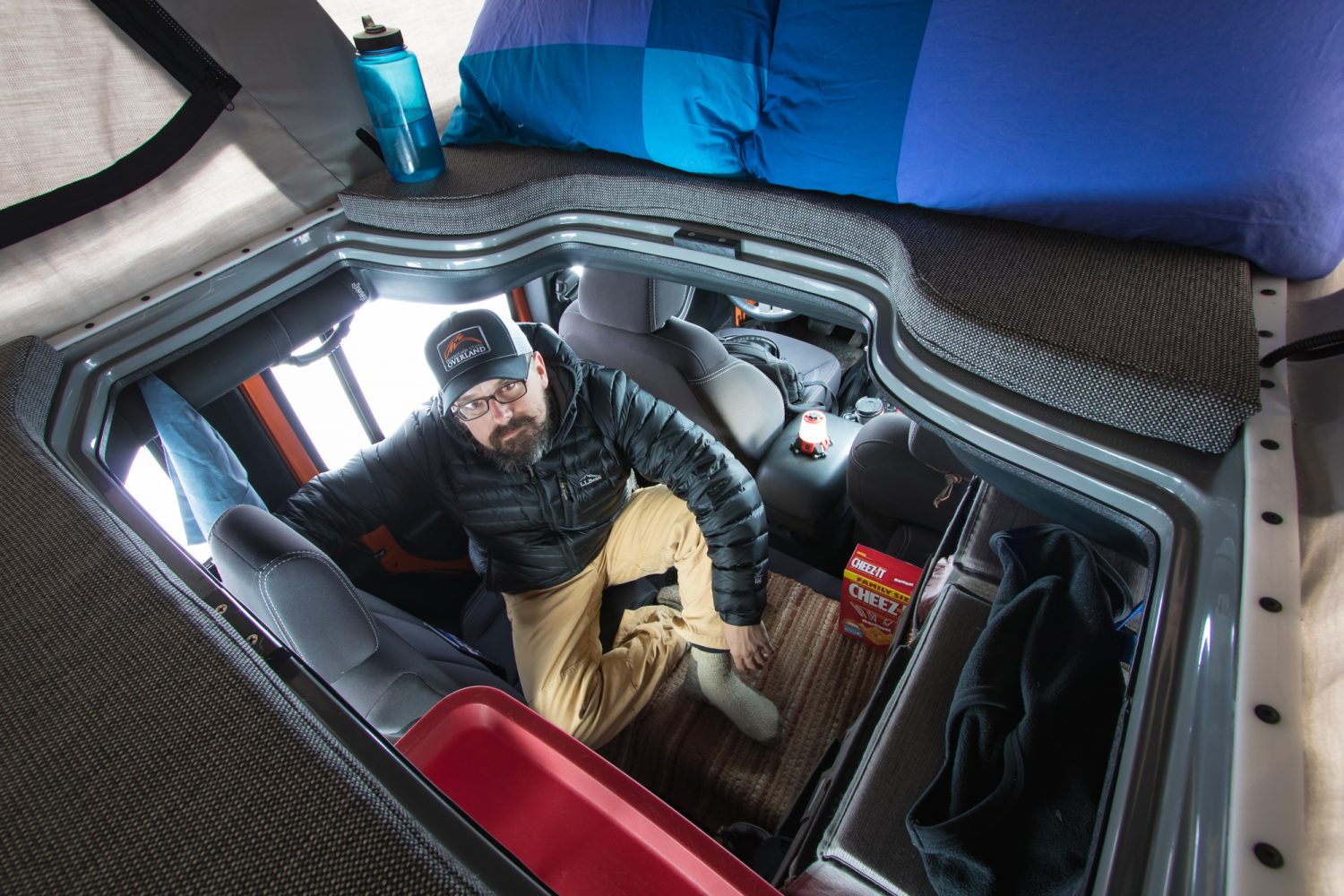 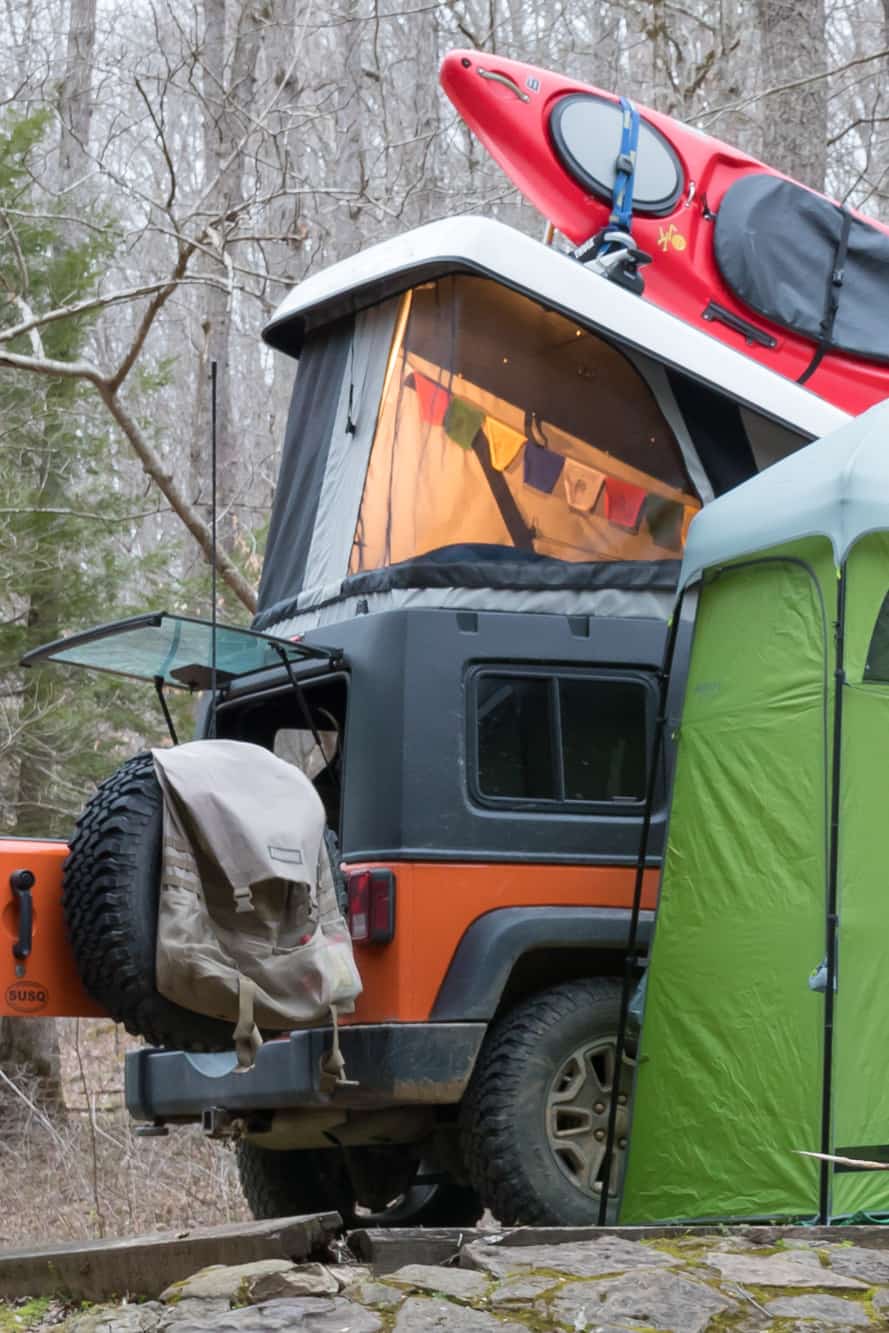 I also installed a Genesis Dual-Battery Kit with two Odyssey batteries, which I consider essential. It very nearly guarantees that your accessories will never drain your crank battery, no matter how great your power demands are. The addition of an appropriate solar solution would likely eliminate battery drain altogether. 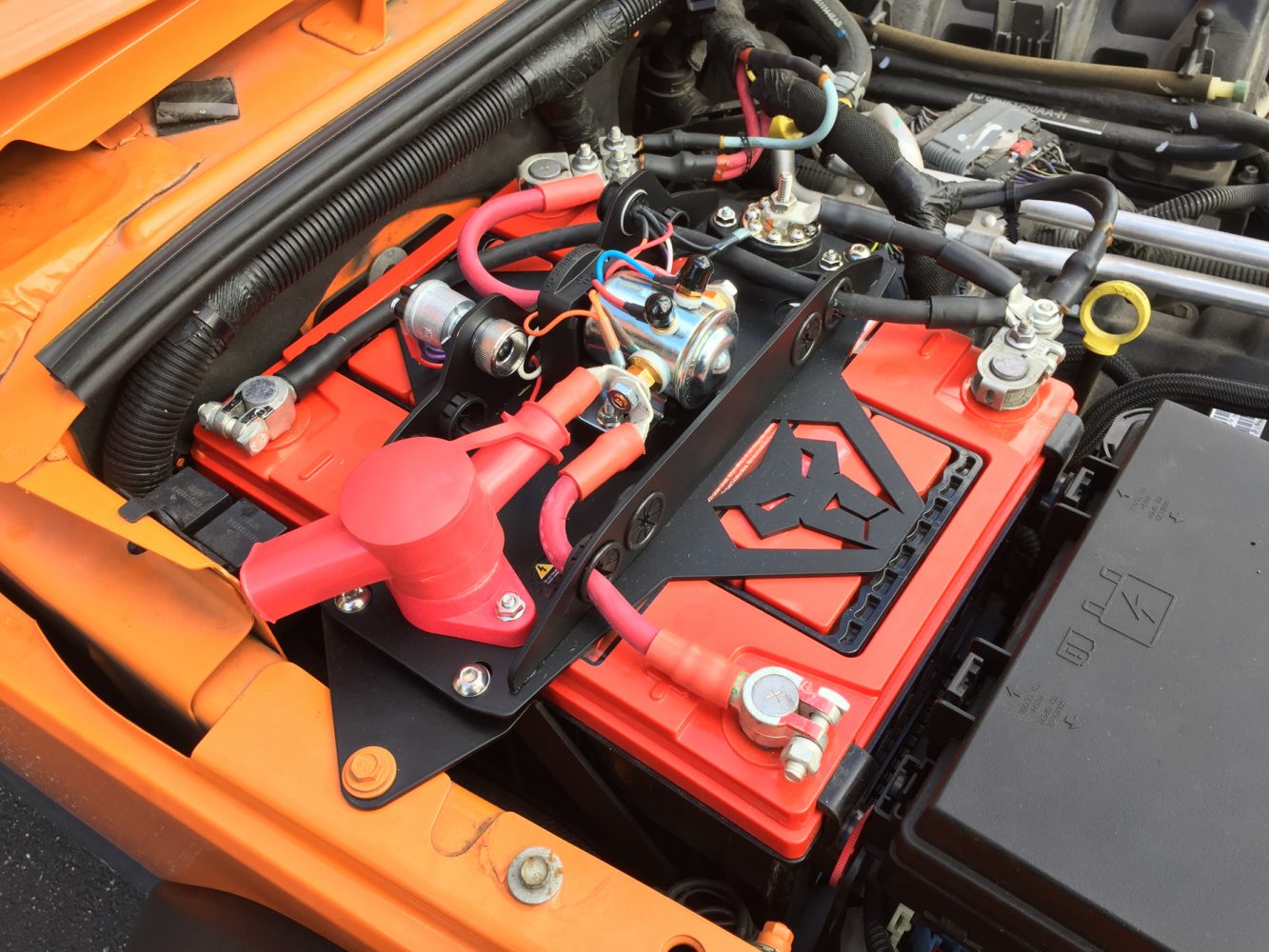 Fast-forward to present day. I am still very actively refining my interior layout, however, I recently spent 167 consecutive nights in the Jeep and made numerous observations. While these observations are specific to my build, I believe they can apply to any platform.

Don’t lock yourself into an interior layout. As you travel, your needs can change. A fixed layout often adds excess weight and is a detriment to versatility. Consider utilizing spacious, sturdy, well-organized storage boxes as opposed to a drawer system. Alu-Box makes a series of boxes in a variety of sizes that are ideal for this purpose, as does Rubbermaid. I recommend a plate system that preserves the open space of your vehicle’s interior, but one that also makes efficient use of the negative space by creating storage compartments out of the awkward nooks and crannies. Furthermore, a plate system provides a flat surface upon which to mount a 12-volt refrigerator, and tie-downs that offer an effective means of securing storage containers. 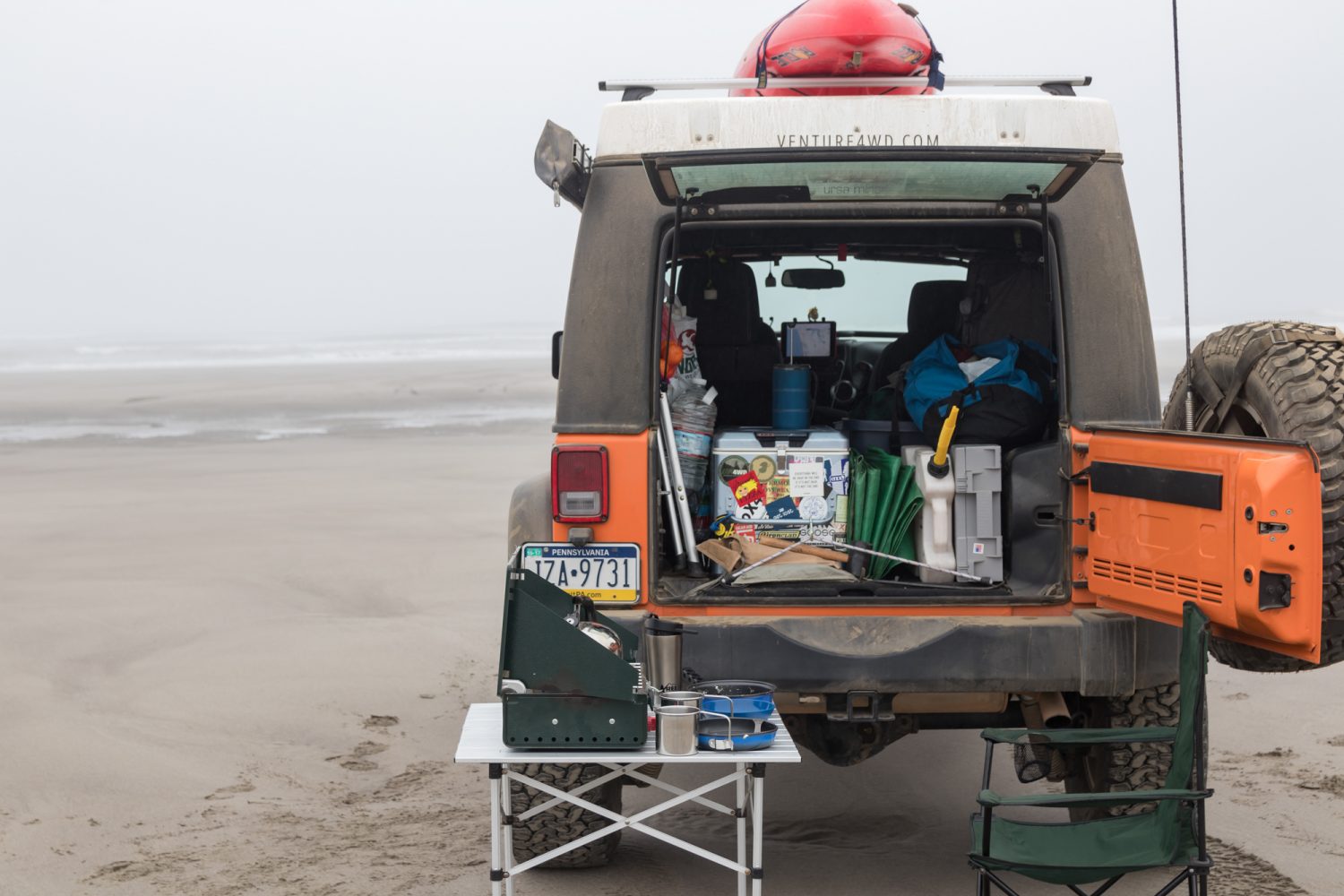 There is a profound benefit to utilizing fabric containers throughout your vehicle’s interior. They can often be installed via Velcro, MOLLE attachments, or carabiners. They offer a tremendous weight savings, and they’re safer in the event of an accident. 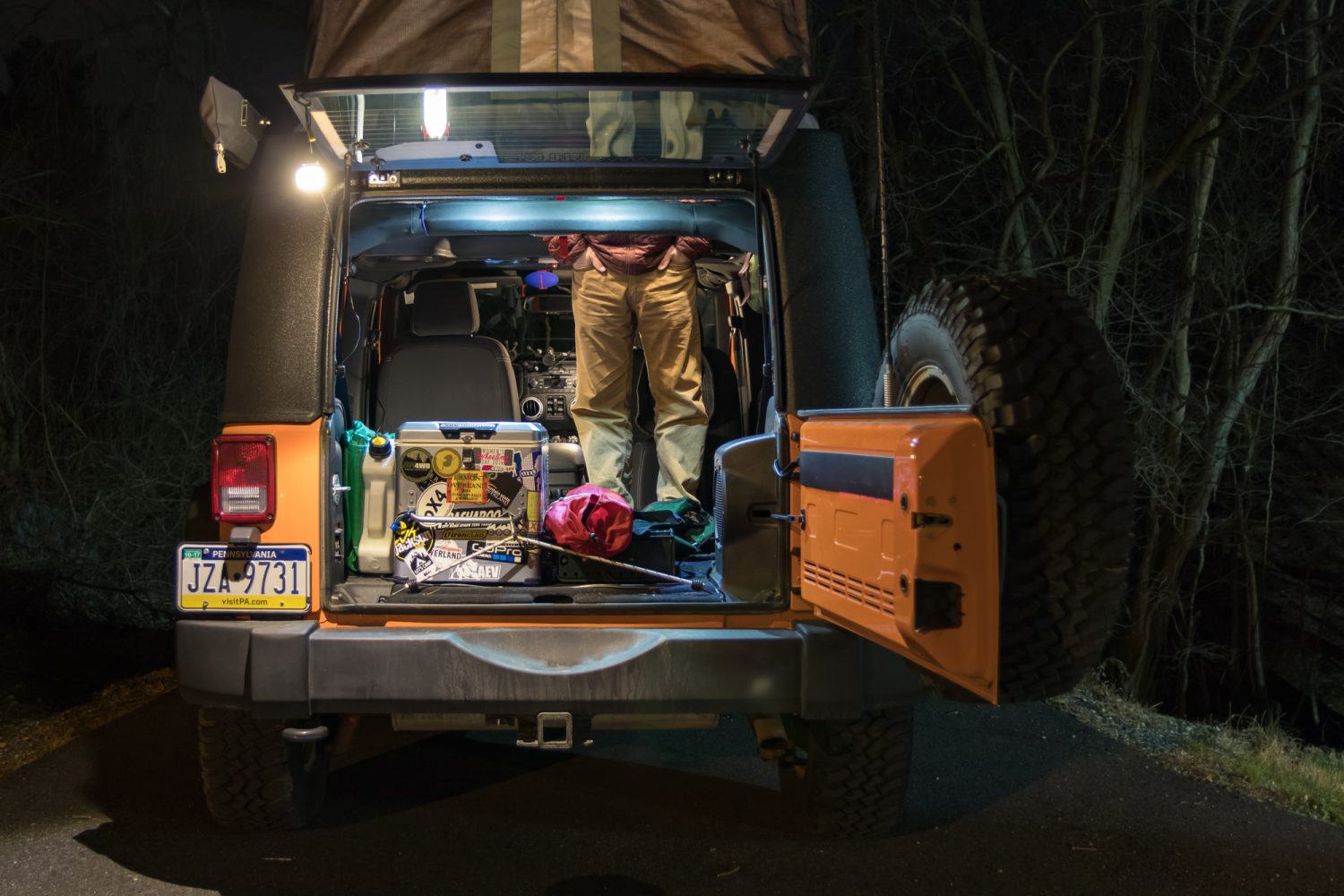 Don’t be afraid to improvise.

During my extended adventure, I had installed two closet organizers purchased at Target. While these weren’t meant for the interior of a Jeep, they were perfect for neatly storing clothes as opposed to rummaging through a bloated duffel bag. 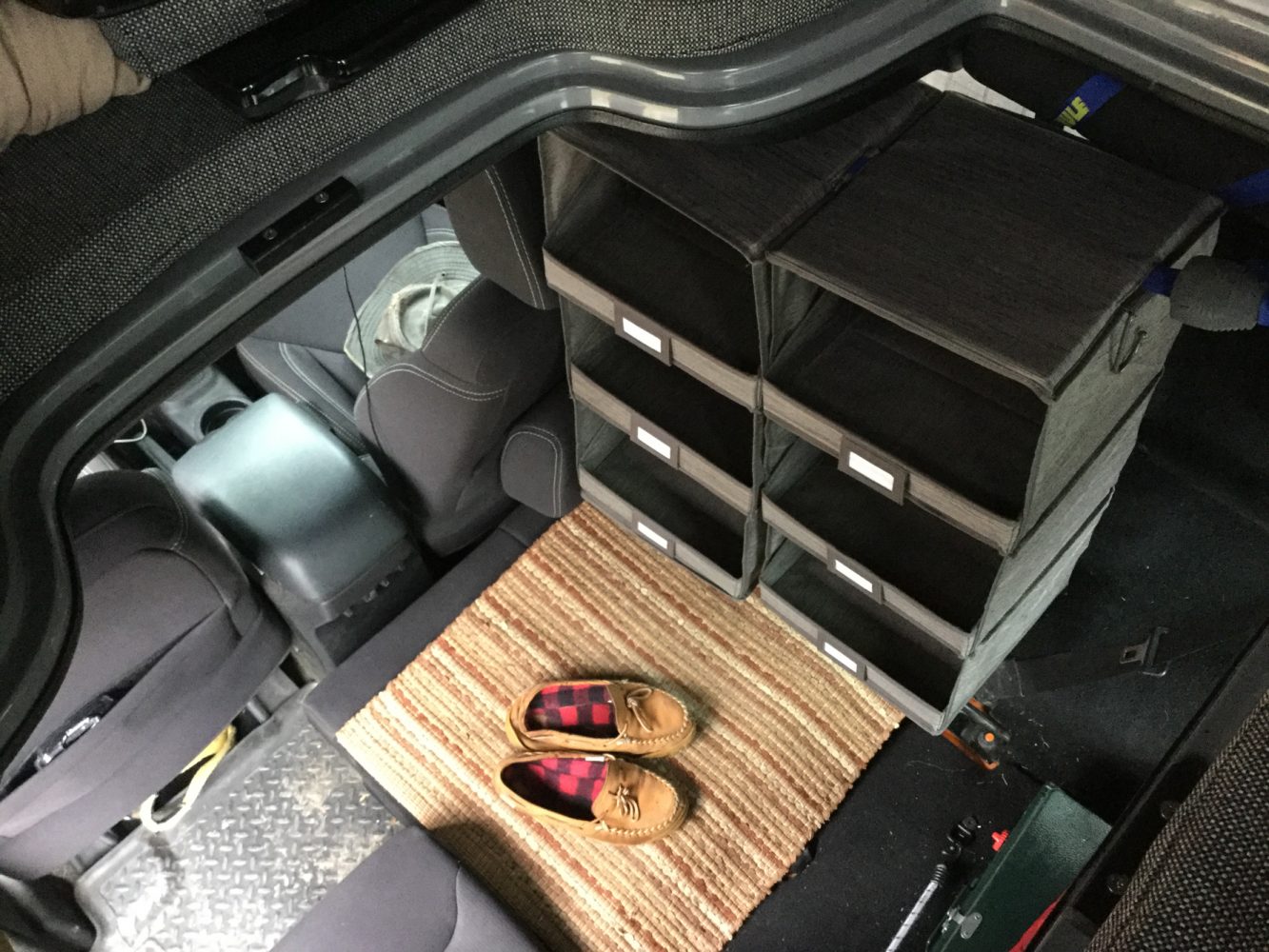 The Jeep is also equipped with a 3.5-inch suspension system from American Expedition Vehicles, with Bilstein 5100 shocks, and 315/70R17C BFGoodrich AT KO2 tires. These are very comfortable, 6-ply, 35-inch tires, listed as original equipment for the Ford Raptor. I spend months driving around the country, and this setup has proven itself to be extremely capable on and off pavement. In addition to the Ursa Minor J30 camper, I have an ARB 2500 awning which I use for shade and additional shelter. ARB’s Deluxe Awning Room adds a tremendous amount of living space when I’m hunkering down for a few days. 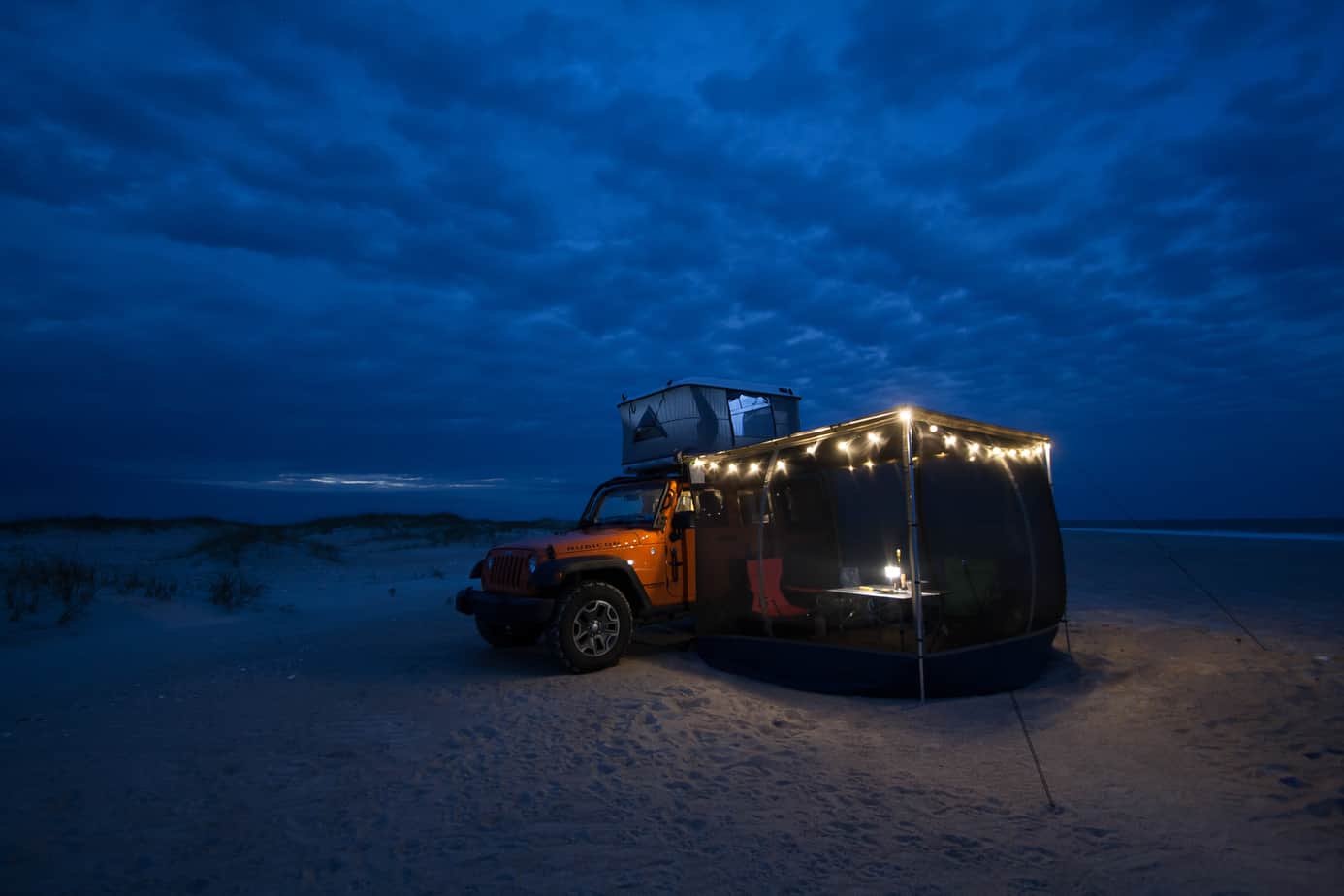 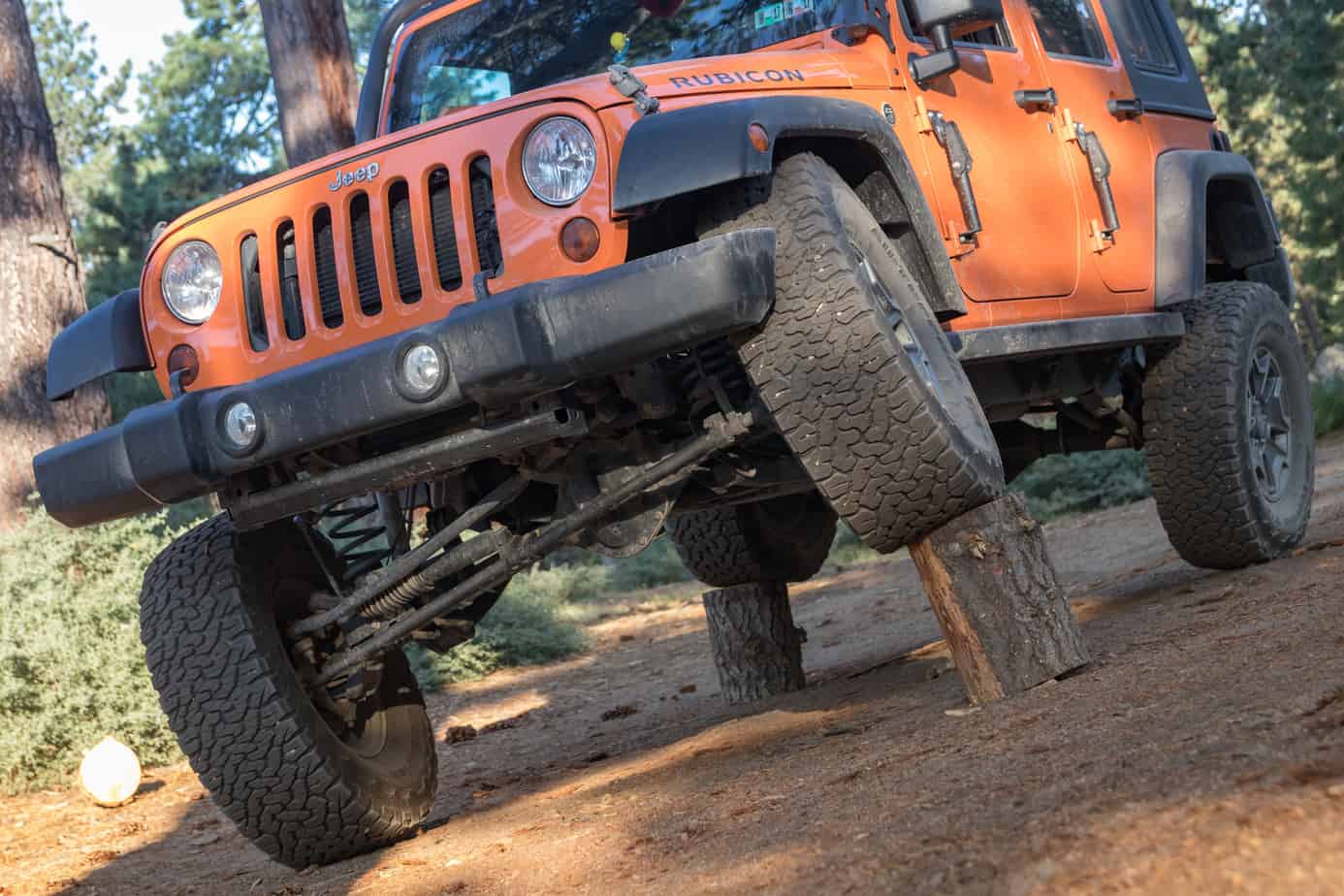 Constantly re-evaluate what you think you need.

With any build, there is going to be trial and error. Sometimes, you might spend a great deal of money and find that it was all wrong. Don’t suffer. Don’t compromise. Cut your losses and start over as soon as possible. Keep it simple, and keep weight savings at the forefront of your mind. A lightweight vehicle is more nimble, efficient, and reliable. 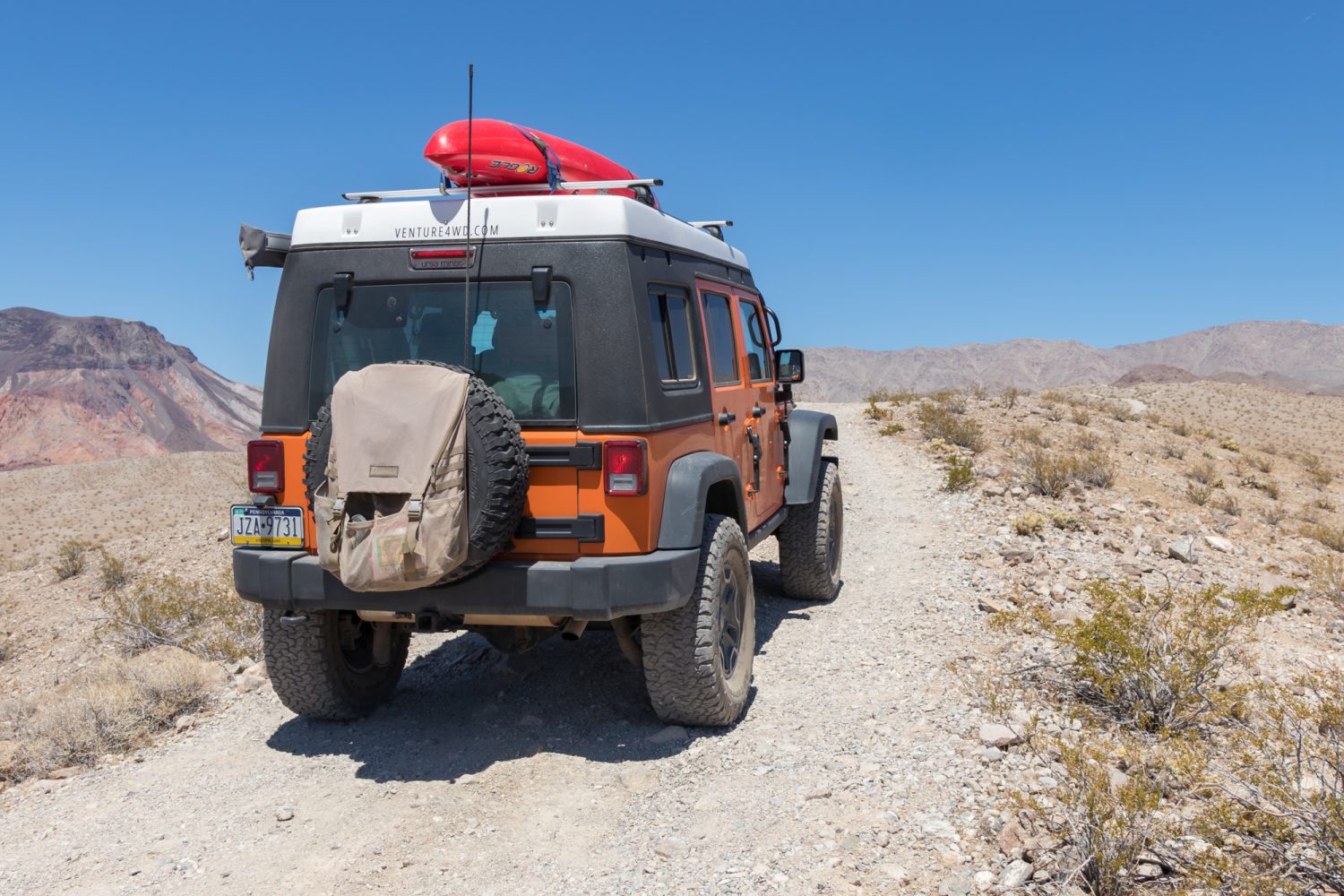 Almost 2 years have passed since I discovered the Jeep on the dealer’s lot and I’m extraordinarily happy with the vehicle. With only a few core modifications, I spent 6 months exploring the continental United States, traveling a total of 17,000 miles. I wouldn’t have been able to cover such distance without rethinking the overland Jeep.

For more than two decades, Chris has been a passionate enthusiast of vehicle-supported adventure. He is a content producer, a visual creative, and a contemporary storyteller who spends much of the year traveling throughout North America in his camper-equipped Jeep Wrangler. His mission is to sustain a mobile lifestyle, seek out secret places, and to share those experiences with you, through documentary-style photography, videography, and the written word.