In the fall of 2013 I got a lot more than I bargained for, gassed up and aired down we left the Cal Black Memorial airport. Tracing the mormon wagon route of the Hole in the Rock Trail we headed west in search of adventure. The first 15 miles or so were easy, building confidence and a leaving us wanting of the more technical trail that I had read of. Then we found it, a sea of sand and sandstone, steep inclines and stairs.

At dusk we set up camp and watched the sunset reflect light on lake Powell off in the distance. The following morning we continued onward with the challenges. Going down a mild slope the minor amount of articulation was causing the front passenger tire to rub on the fender. Rolling forward onto flat ground the continued rubbing was predicting the trouble ahead. A quick inspection had revealed the lower control arm mount had broken off of the axle. Having been the only tire tracks we had seen, hope of a welder showing up seemed grim. So we set to work lashing the control arm to the axle with large amounts of paracord and a ratchet strap. The drive back to pavement took a day and a half listening to my tire try and eat my fender. A flatbed was arranged at the nearest town for the drive home and a vow was quickly made to return and not let this trail defeat us. 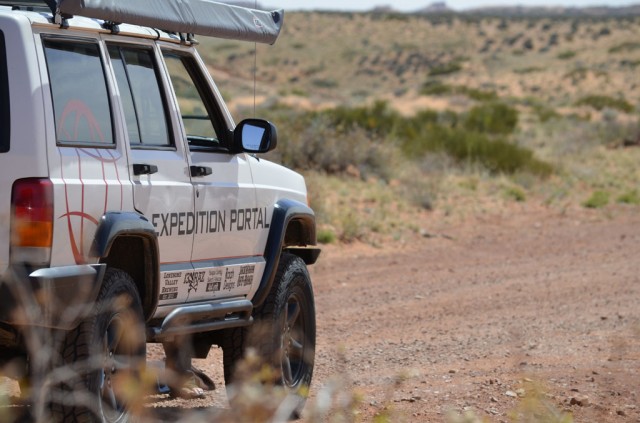 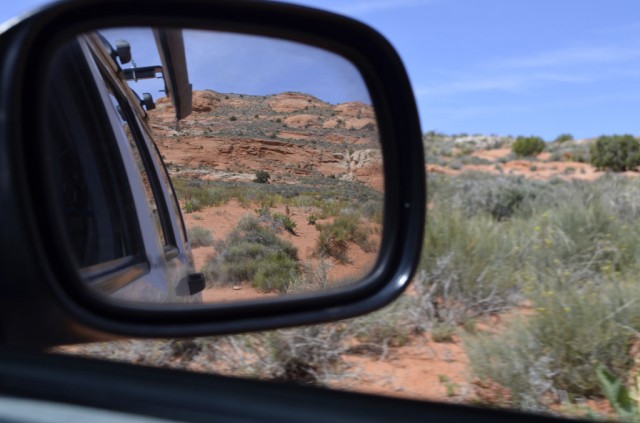 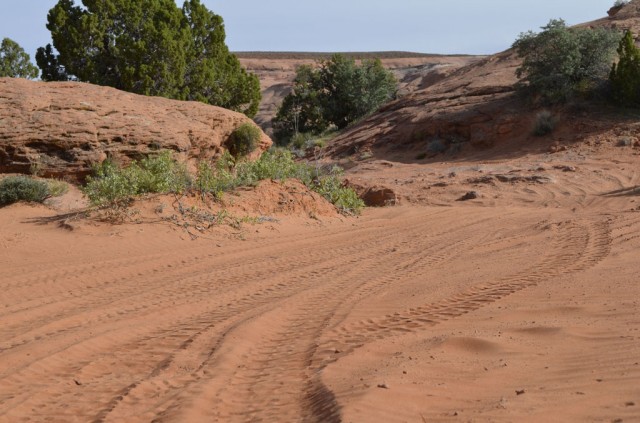 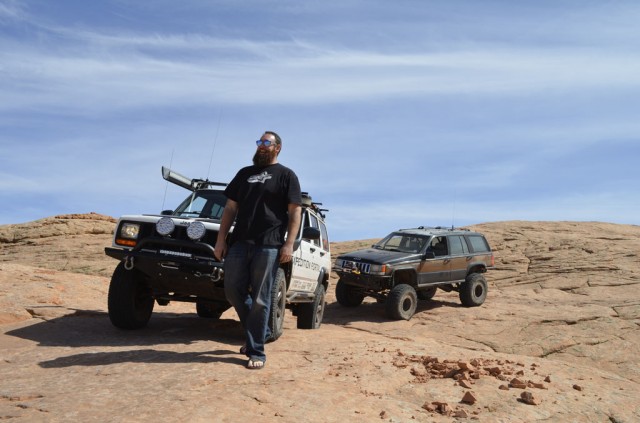 A year and a half later I set off to get my redemption for the one trip that I hadn’t finished. The story starts off the same way leaving early, traveling through Monument Valley, up the beautiful Moki Dugway. Climbing onto the sandstone coming to the first real obstacle, a steep and very off camber right hand turn. We ran across another traveler, Stating,”Are you going all the way in that? Good luck.” I didn’t know this at the time but that would be the theme for the rest of the trip.

Carrying on through what were still familiar obstacles we made good time getting to the ledge that had made my little Cherokee a victim the last time we met. No part of it was hard and made me laugh at the mental anguish that I had put into it. The trail at this point carried on for a while, fairly easy and bumpy with an occasional step or steep slope thrown in. Most importantly though it was all new to me. Nearing grey mesa we came across a group of hikers, who had been dropped off by boat in Cottonwood Canyon, and were walking all of the 34 miles out. They offered up advice to camp where we were because in several hundred yards the trail really starts. Getting late we decided to heed their advice, set up camp and relax. As the sun set we got a visit from one of the hikers, who had been down the trail by way of her 4WD side by side and on foot well over a dozen times. After small talk she led into questions about us even making it on our equipment. In what would become a memorable message, she said, “A Grand Cherokee locked on 35s should be fine but a little Cherokee on 31s with open diffs would be trouble.” 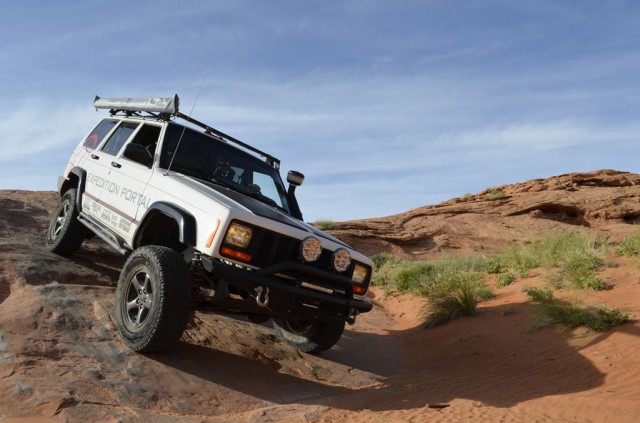 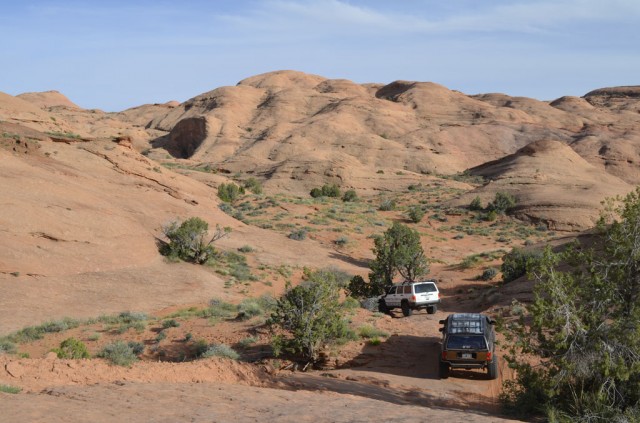 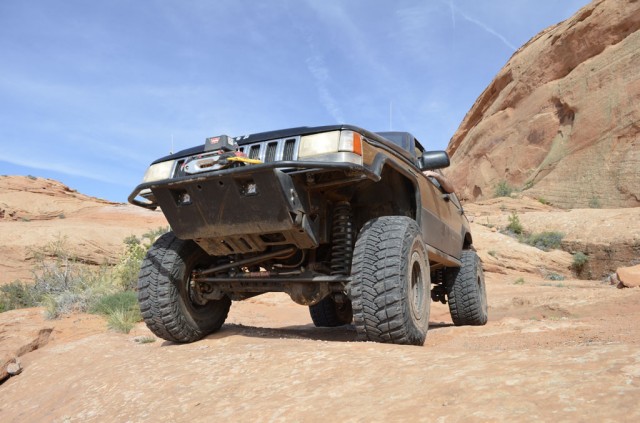 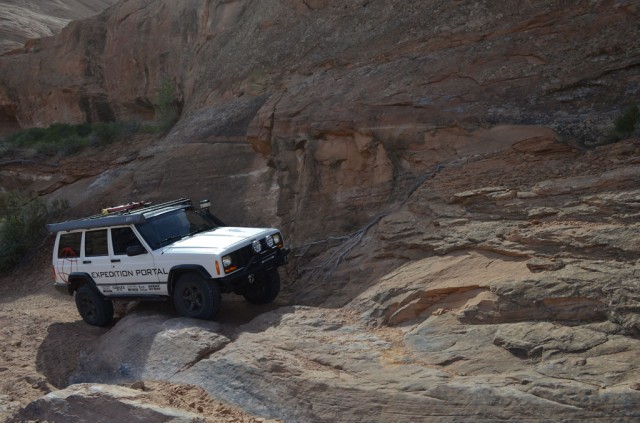 Getting rolling the following day it didn’t take very long to hit the real start of the trail I had been told about. The previous day was fairly difficult by most standards, but was just the warm up to what we were about to see. The start of the climb up Grey Mesa includes a four foot tall near vertical ledge. This is a good reminder whatever you go down, you need go up. The trail has a number of off-camber large stairs, near vertical inclines, and one particular off camber section that slopes right toward a hundred foot drop. The driver in the Grand Cherokee had a few choice words as the massive travel and soft springs tipped right toward the edge. Easing off of the ledge and onto a somewhat level ground was a great feeling and allowed view that was easy to take in.

Gazing down several fingers of the canyon towards Lake Powell sparkling below, we quickly arrived at the top of Grey Mesa. After spending the whole morning in four low, we welcomed the smooth fast paced road across the top of the mesa. Views of the San Juan river make for a great backdrop. Just before we headed off of the mesa, the side road we were told about headed north. We carried on towards Cottonwood Canyon at the end of the trail, leaving it for the way back if we had time. 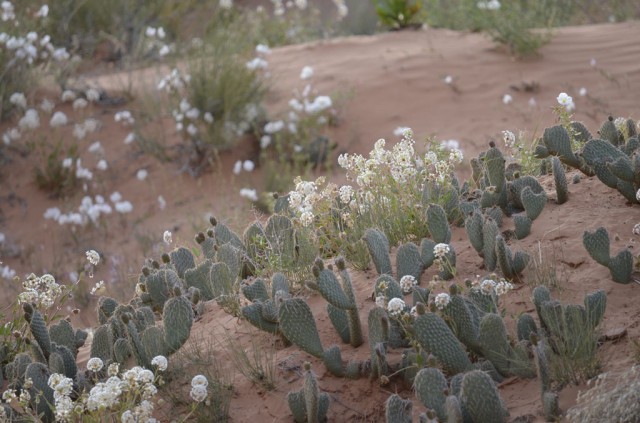 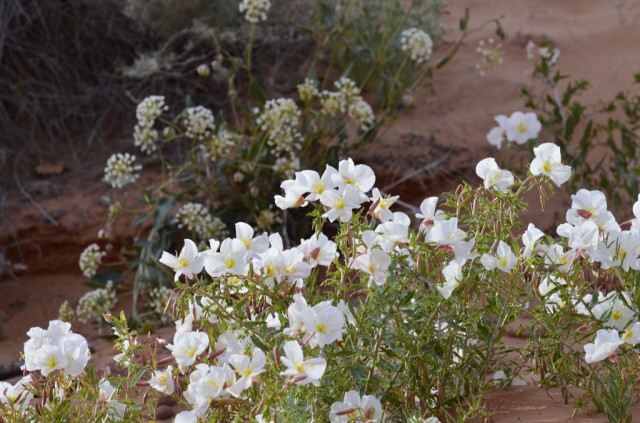 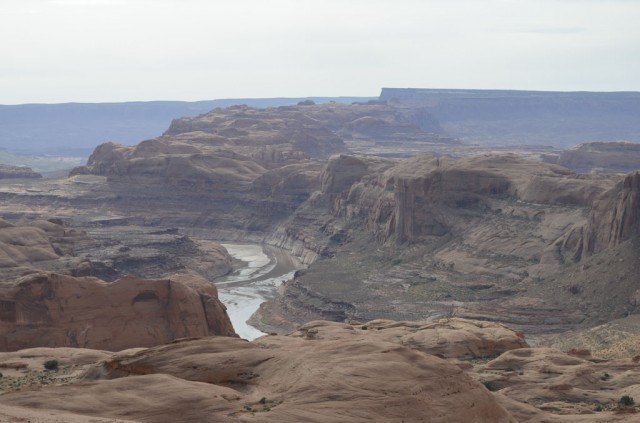 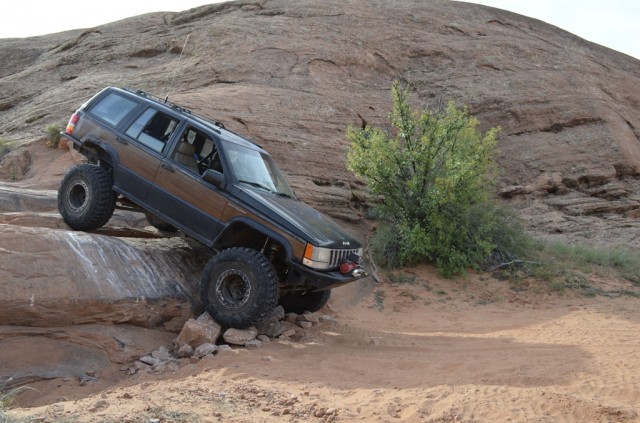 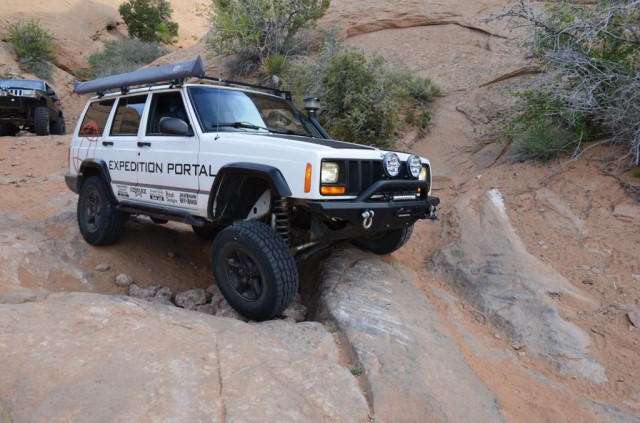 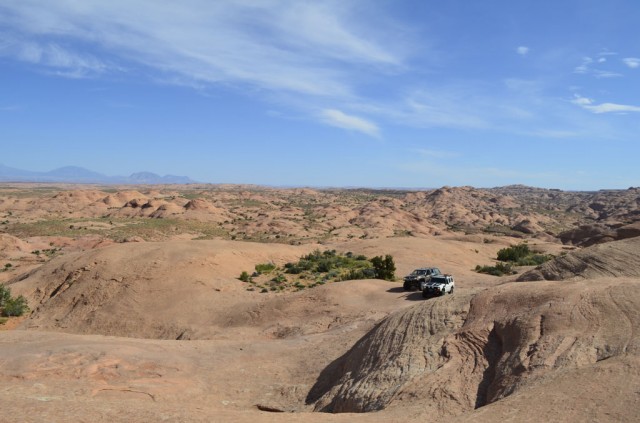 Heading down off of Grey Mesa, trail finding became more and more difficult. Cairns off in the distance were the only way to get an idea of where we should be headed. Coming down to the famous Chute, it was easy to realize that this is misnamed as the hardest part of the trail. It’s steep and long but a cakewalk compared what was ahead. A number of very steep sand covered ledges gave us a great view of either the clouds or the ground till the end of the trail. Keeping an eye out for holes along the trail became the norm as most of them could eat an average SUV for breakfast.

The end of the trail at Cottonwood Camp was a perfect place to have lunch and take in our incredible feat. The view was amazing and would have been a great place to have set up camp had it been later. Finished with lunch we headed back up everything we come down.

Making great time up through the Chute and back onto Grey Mesa we came across the side road that the hiker had told us about, we didn’t want to camp in the same place twice so we continued down the Rincon road. We had been told that the views were amazing and that a while ago you could make it down and camp on the lake, but it had been impassable for quite a while to any full size vehicle. 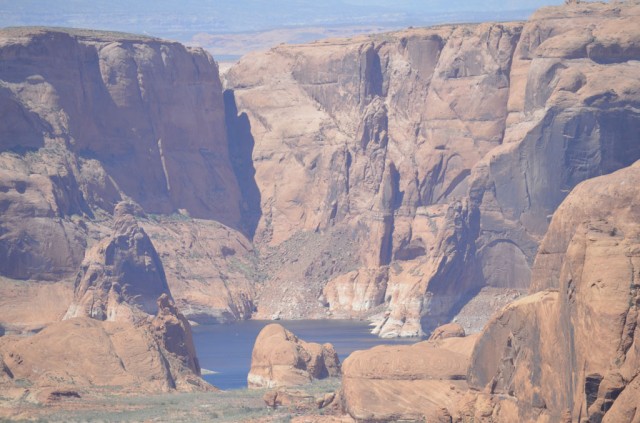 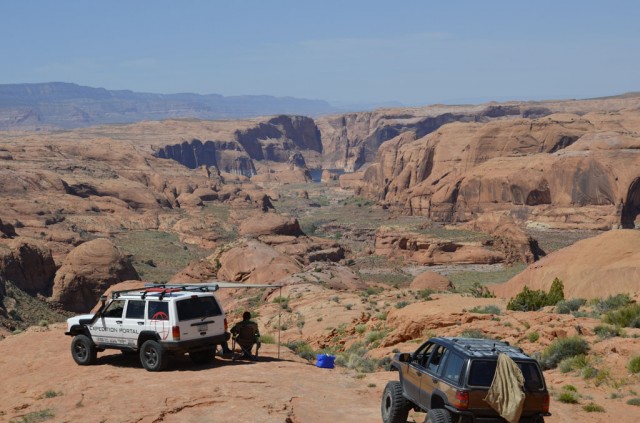 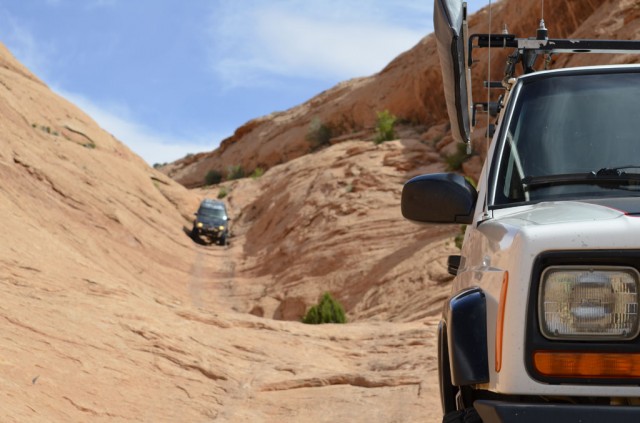 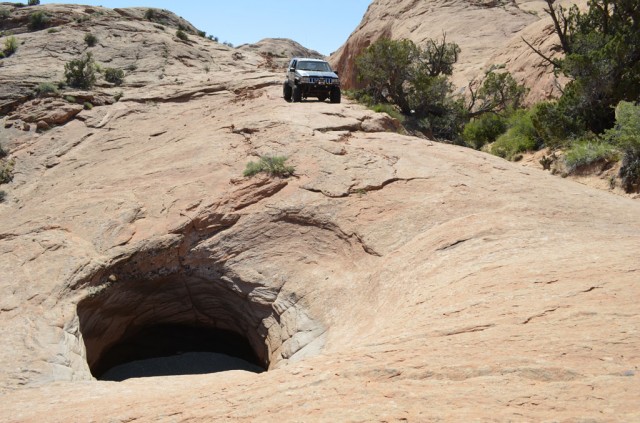 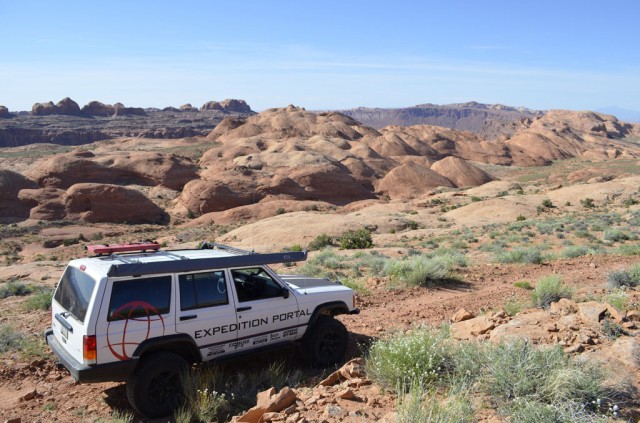 The road started off easy and rather boring. The views were not great initially but quickly changed with a large ridge of bulbous looking sandstone. I had maps and waypoints of the Hole in the Rock Trail, but this was all new. The road went from smooth and sandy to a sharp turn down a tight canyon with a very steep drop into the wash. My rock slider took a couple hits on the trip, but this ledge left some very nice scratches. Once in the wash route finding took a little work with no tire tracks or noticeable cairns, just a few differential scratches in the rock. At this point we worked towards cresting the ridge, weaving around holes just waiting to swallow my Jeep. I looked up and saw a cairn sitting on a small peak and we started up the final assent.

I was prepared for a lot on this trip, but the view as we came over the ridge was outstanding. Sitting on a 1000-foot cliff overlooking the lake. It was quiet and reflective until we started looking to see where the road went. It was a ten foot wide, bolder strewn, steep, loose, shelf road. Using some better judgment we decided to walk down a good way, and for better or worse we started down in the Jeep. All of my skid plates and differential covers paid off a number of times on the way down and the scrapes sounded normal by the end. A few larger rocks had to be moved, but we had committed and backing up wasn’t really an option. Reaching the bottom my wife started breathing again until she realized that we had to go back up in the morning. 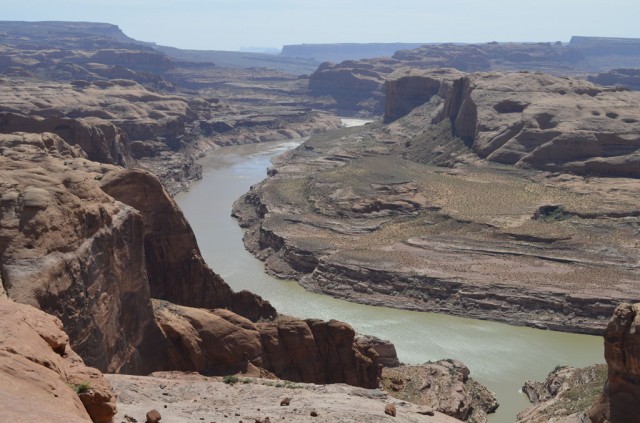 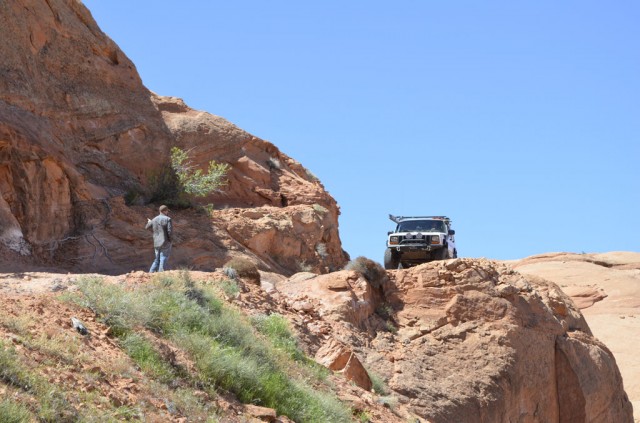 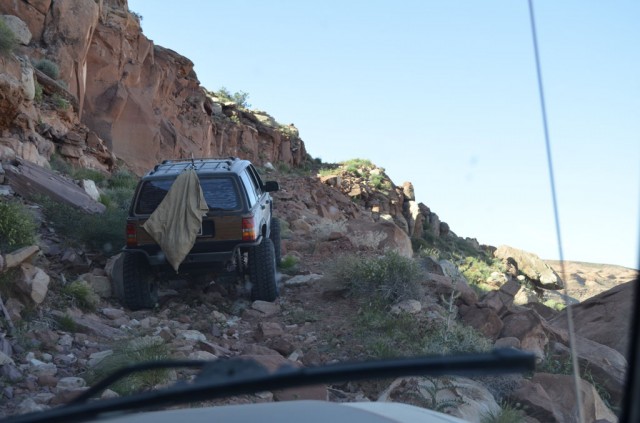 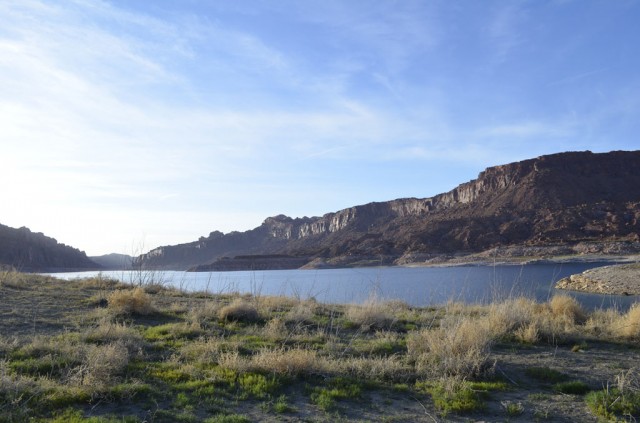 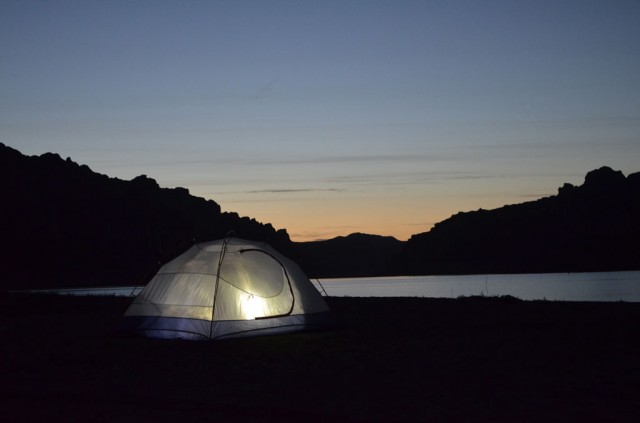 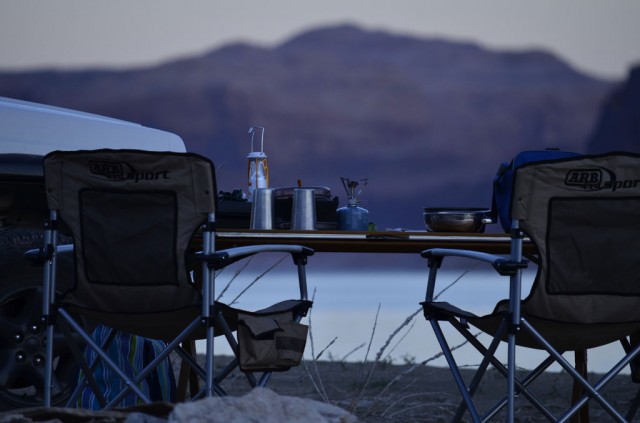 Though route finding in the wash was difficult we were set on camping on the water’s edge for the night. Getting small glimpses of the sparkling water through the holes in the trees was an uplifting sight after all of the adrenaline starting to fade away. The route eventually opped out through the last vegetation onto a peninsula jutting out into the lake. Our doors flew open and we were off down the beach, stripping off shoes and shirts. Jumping into the painfully freezing, snow melted lake. Our camp for the night was the best I have had in my life so far. Sipping martinis while watching the sunset with friends is the reason we do these things.

After all that we had been through on this trip we were not quite done, in fact we had a full day’s drive back out. Even though the drive out was still littered with difficult climbs and ledges it felt almost easy in contrast of the previous day. We chugged right through everything we went down and made it back to the airport by late afternoon. Topping off tires and fuel gave us an overwhelming feeling of victory, having taken my little Jeep that had been doubted before and during the trip by many people including myself.

We had made it through the Hole in the Rock Trail. 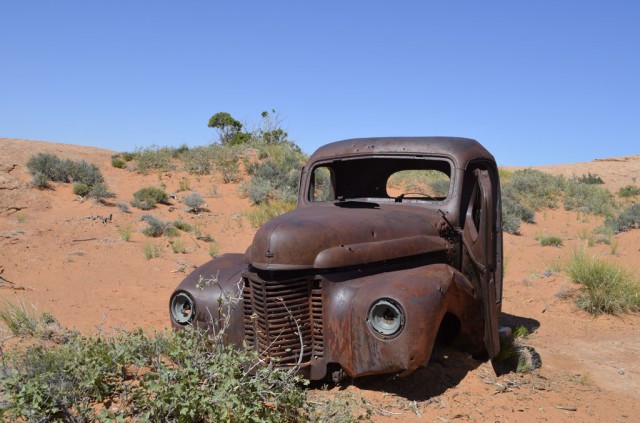 Growing up on a used-car lot in Prescott, Arizona, Chris Ramm developed a passion for automobiles at a very early age. While most children had treehouses, he played in a 1960 Ford Sunliner convertible which quickly became his first project car. As soon as he received his driver’s license, Chris frequently found himself driving across state lines for something as small as an ice cream cone or slice of pizza. When he bought his first 4wd vehicle, a 1998 Jeep Cherokee, he started exploring the numerous trails in the southwest and hasn’t stopped yet. When you can’t reach Chris on his cell phone, it is safe to assume he is out in the forest finding new trees to hang a hammock between and enjoying a local brew. 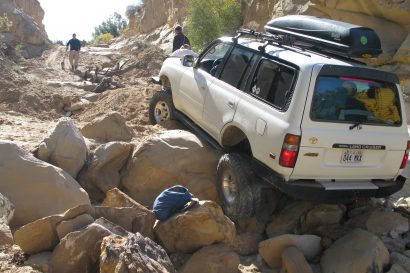 Deep in the Heart of Escalante 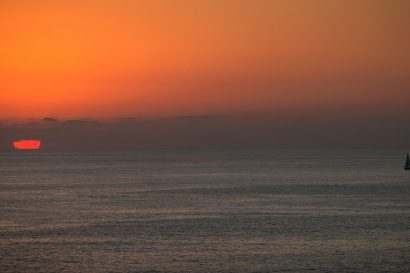 A Southern California Adventure (Part I) 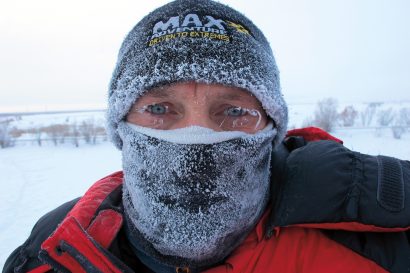