Arizona may be known for saguaro cactus, but it is also 26 percent timberland, and Humphreys Peak rises 12,633 feet into the southwest skyline. From the precipitous enclave of Jerome, and the start of this Overland Route, Humphreys Peak looms in the distance. This region of Arizona has a rich mining history, with Yavapai County being home to over 6,700 active claims and 1,270 mines. With prospecting comes a patchwork of remote and challenging overland tracks that meander through the mountains of Central Arizona, including our chosen route for this adventure, the Trail of Kings, from the Gold King Mine outside of Jerome to the mountain hamlet of Crown King.

This particular route is special for Overland Journal, the track passing by our offices in Prescott before continuing south through this original territorial capitol and on into the Bradshaw Mountains. For this adventure, our CFO Andre Racine came along, and we drove his Gen 2 Toyota Tundra. We left the Overland International offices with a full tank of fuel and a spartan selection of gear. The Trail of Kings was waiting.

The majority of the route is contained within Prescott National Forest, with elevations as high as 6,700 feet and an average elevation of just under 5,000 feet. This results in cooler temperatures, with Crown King staying below 90°F on average, even in July. While the trail is technically open year-round, passage in winter can be unpredictable as significant snowfall is possible, making the road impassable for some vehicles.

This region’s first documented inhabitants are the Hohokam people, who settled this area around 700 AD, and ultimately, the Yavapai, that continue to live in the area to this day. The Yavapai have a rich history as a hunter-gatherer tribe, migrating through broad swaths of central Arizona, west all the way to the Colorado River. They were one of the few tribes in the region to regularly tattoo their faces and are known for their powerful masked dances. The Mountain Spirit dance represented the gods that inhabited local mountains, including Mingus, that forms the starting point of this journey in Jerome.

Jerome is perched precipitously on the flanks of Cleopatra Hill, overlooking the historic towns of Clarkdale and Cottonwood, with the crimson rocks of Sedona punctuating the horizon. The history of this recently ragtag and currently ramshackle mining town is rich and lively, complete with countless tales of conquistadores, mining millionaires, and ghost stories. You can stop for a wine tasting at Caduceus Cellars, owned by Jerome resident Maynard James Keenan from the band Tool.

Mingus is a flat-topped mesa with significant exposures of Precambrian rock and rich veins of copper, silver, and gold. It rises to 7,800 feet and includes one of the more popular paragliding launch sites in the state. The mountain is home to a wide variety of fauna, including mule deer, pronghorns, bears, mountain lions, javelinas, bobcats, and more. Use caution when walking off the beaten path as numerous species of rattlesnakes call the forest and foothills home.

As the track continues south of Prescott, the trail climbs elevation into the Bradshaw Mountains, along the remote corridor of the Old Senator Highway. Originally settled by the Kwevkapaya people, this 40-mile-long range reaches surprising elevations, topping out at Mount Union (7,979 feet). The range is biologically diverse and also primarily composed of Precambrian granite. 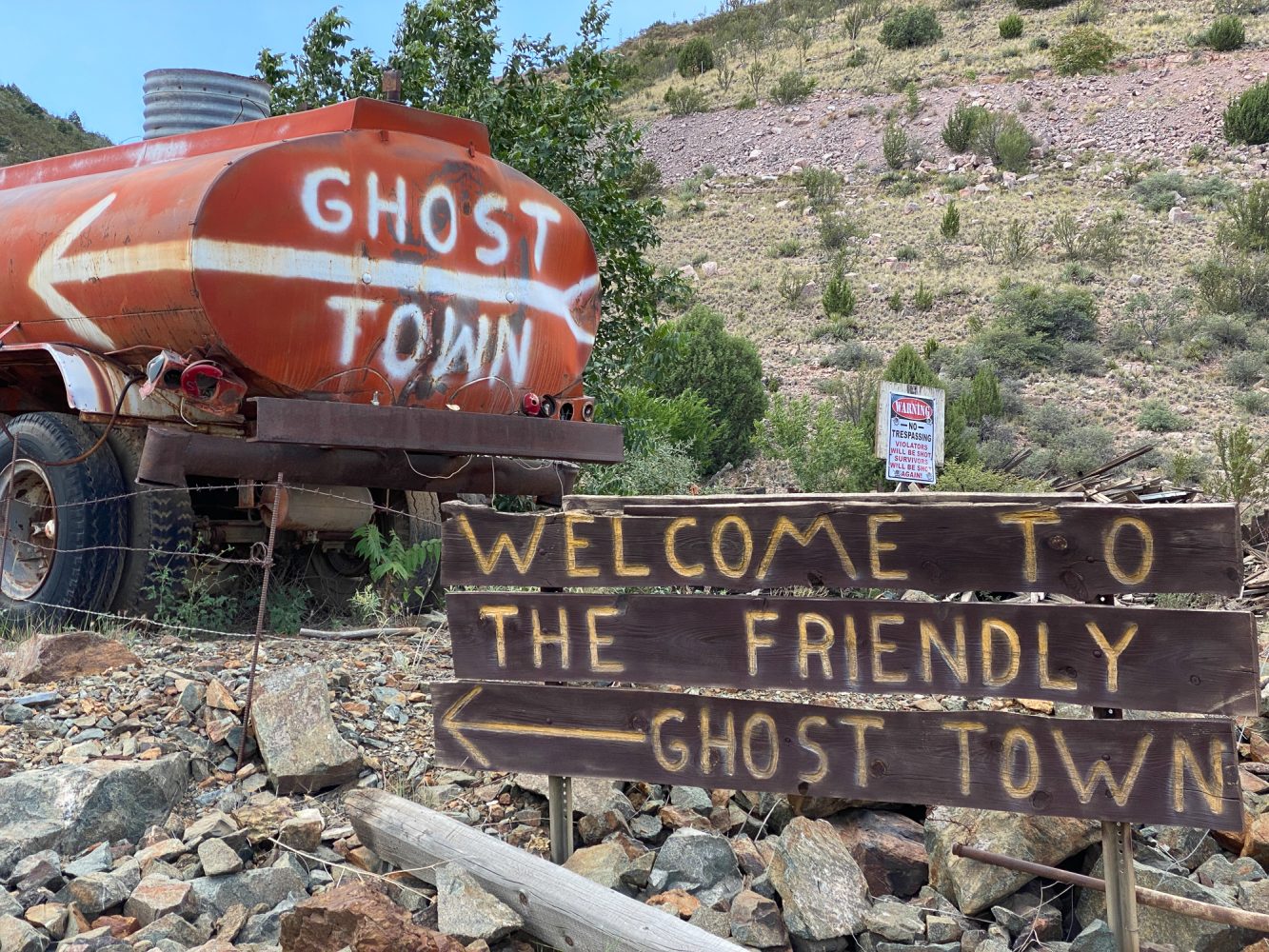 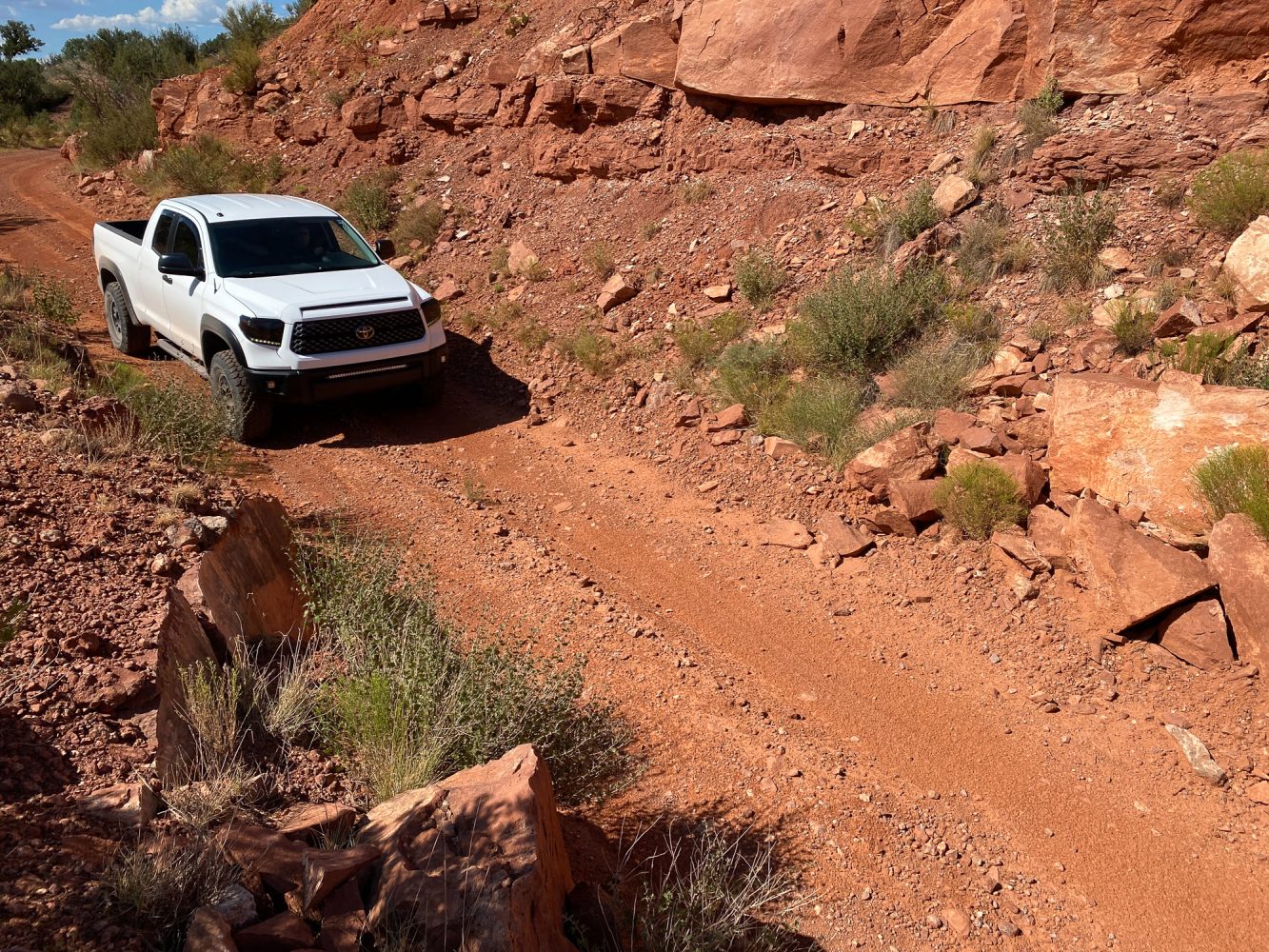 The Trail of Kings begins in historic Jerome, departing State Route 89A at the fire station onto Perkinsville Road or County Road 72. Look for the old water truck with a red arrow pointing to the Gold King Mine. Along the south side of the road, the United Verde Mine is visible, along with the massive tailing pile of this now-defunct operation.

Within a mile, there are signs to the Gold King Mine on the left, which is currently open Wednesday through Monday from 9 a.m. to 5 p.m. and features an eclectic collection of historic 4WDs, motorcycles, and mining equipment. There is a $10 entry fee for adults, and it is worth the stop.

After leaving the Gold King Mine, Perkinsville Road turns to graded dirt and climbs quickly along the foothills of Woodchute Mountain. Within a few miles, opportunities for camping emerge, with beautiful views to the north. It is good to depart the main road by some distance before camping as this is a well-traveled area, and dust can be significant. Use caution around blind corners and manage speed, as UTVs will often be traveling well above the posted 25 mph speed limit. 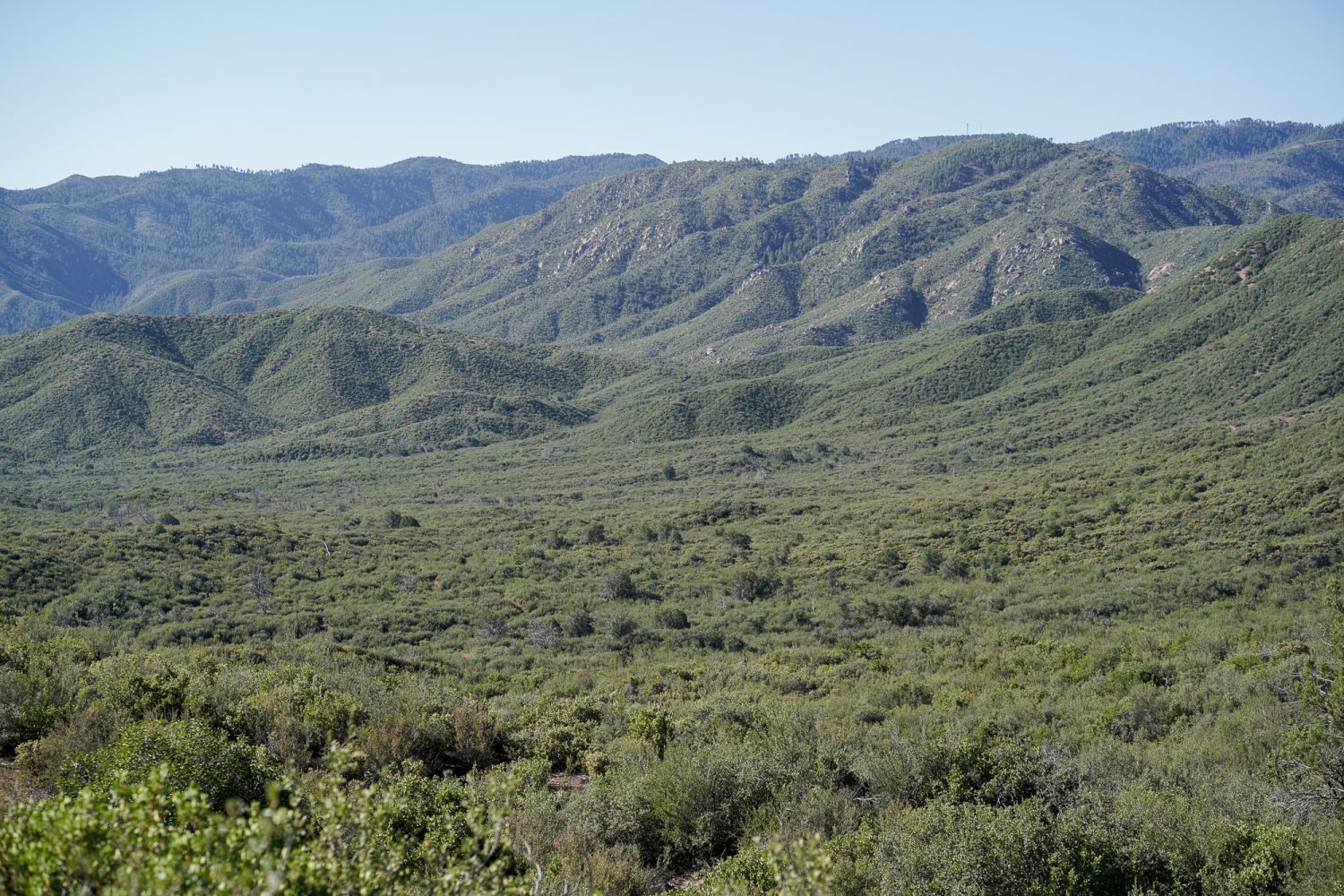 From Chino Valley, it is a paved route along State Route 89 until historic downtown Prescott. It is also part of the historic Overland Road, which incidentally passes just behind the Overland Journal offices at (34° 35′ 42.25″ N, 112° 25′ 38.08″ W). We would also recommend a visit to the stunning Watson Lake, a high-mountain reservoir surrounded by granite walls and spires.

Downtown Prescott is centered around an idyllic courthouse square and worth a stop. The route continues south from the historic district on Mount Vernon Street, lined with fantastic examples of Victorian homes. Mount Vernon transitions to Senator Highway and continues for seven miles on pavement until turning to dirt.

Stay on the well-signed Senator Highway, which meanders through the forest until intersecting Walker Road, when the road becomes less maintained and narrower. Taller campers will need to mind tree limbs from this point on. The Senator Highway will be marked as Forest Road 52 and will continue south with numerous offshoot trails and tracks; stay on the main road.

From Crown King, the traveler has the option to turn east and back to Interstate 17 through the town of Cleator or to continue south on the Old Senator Highway (also known as the Backroad to Crown King) into Lake Pleasant. That route is even more technical, often requiring a high-clearance 4WD and a good spotter.

During the dry season, the route can be completed in a high-clearance AWD SUV or larger 4WD camper. Travelers should keep an eye on snow conditions during winter and avoid the height of the monsoon season due to the potential for trail damage or impassable conditions. A 4WD with low range is preferred due to steep and loose grades.

The area is best accessed in the shoulder seasons of late spring or early fall. Summer months can be warmer and heavily trafficked.

There are no permits required for traveling the BLM and forest roads of Mingus Mountain or the Senator Highway. Camping is limited in Arizona’s national forests to 14 consecutive days. Fire and camping restrictions may go into effect without notice.

Boondocking site near the trail with multiple level areas; the driver may elect to drive farther from the track to additional sites

It is recommended that the traveler utilize redundant GPS devices (like a phone and a dedicated GPS), along with paper maps and a compass. This track, along with all other Overland Routes, can be downloaded on our website at overlandjournal.com/overland-routes/.

Overland Route descriptions are intended to be an overview of the trail rather than turn-by-turn instructions. We suggest you download an offline navigation app and our GPX track, as well as source detailed paper maps as an analog backup. As with any remote travel, circumstances can change dramatically. Drivers should check road conditions with local authorities before attempting the route and be ready to turn back should extreme conditions occur. 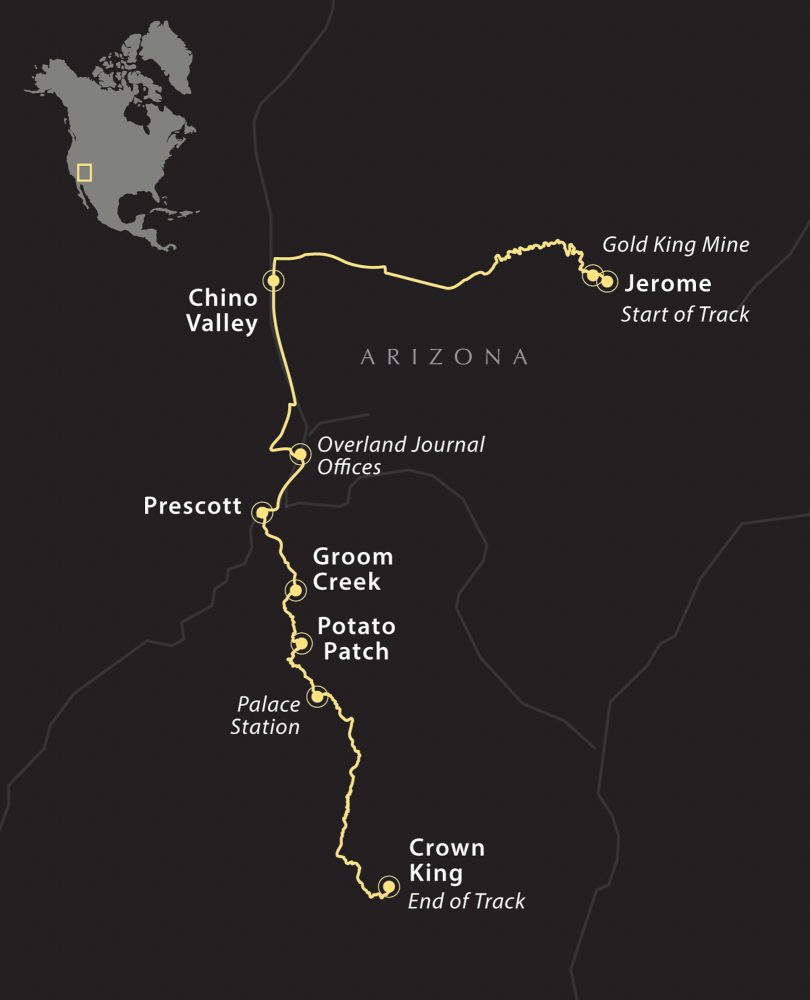