Anza–Borrego Desert State Park (ABDSP) is a remote moonscape that beckons the adventurer with technical terrain, expansive geology, and the solitude of desert campsites. It is named for the Spanish explorer Juan Bautista de Anza and borrego (bighorn sheep). At 600,000 acres it is the largest park in California, featuring over 500 miles of dirt roads, 110 miles of hiking trails, and 12 wilderness areas. 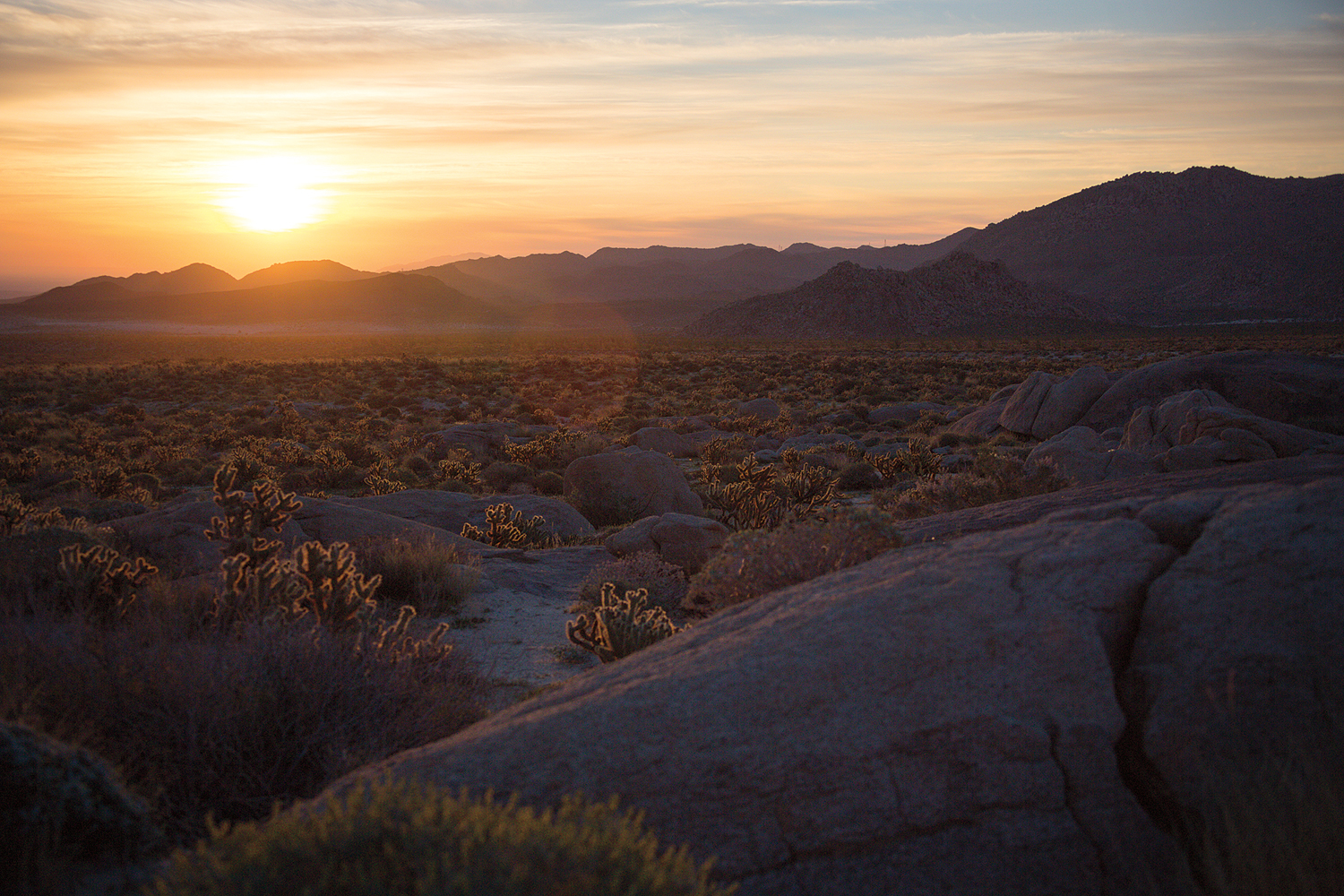 In the early 1930s, a group of influential San Diegans identified the Anza–Borrego area, which includes a wide array of geological and ecological diversity, as being uniquely untouched. Several donated land and many more provided money to help establish the park. The original goal was for a million acres of multi-use land to be preserved from development, but the County of San Diego quickly stepped in, fearful of a negative impact to economic growth and expansion of the available lands. Negotiations ensued and a smaller park was eventually appropriated; the final federal lands patent was granted in May 1948. Today, we benefit from those early preservation efforts. 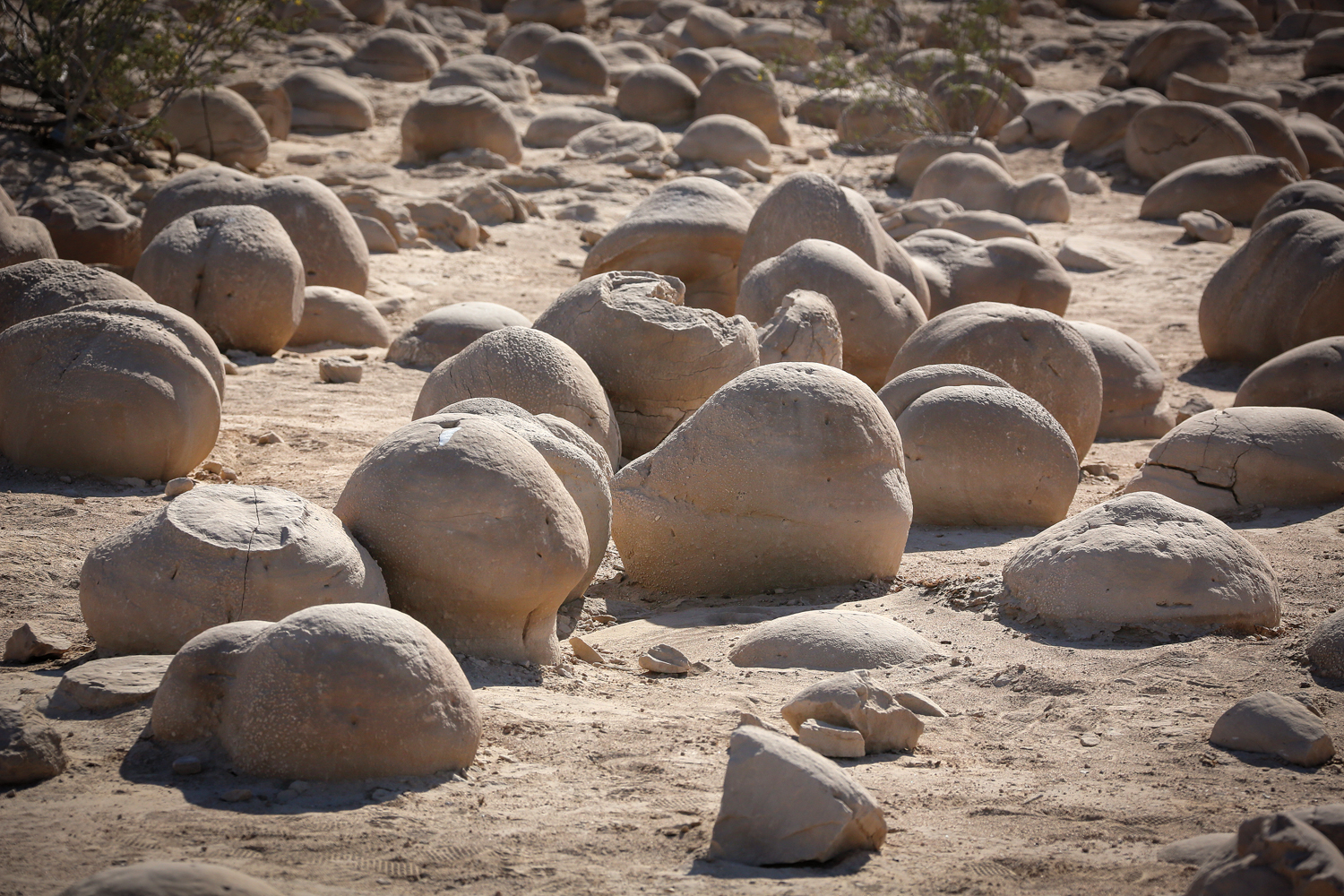 Located in Southern California, just east of San Diego, ABDSP is bordered by the Los Coyotes Indian Reservation on the northwest side, Cuyamaca Rancho State Park on the west, Interstate 8 on the south, and the Ocotillo Wells State Vehicular Recreation Area on the east.

Elevation ranges from 6,193 feet at Combs Peak to below sea level in the Salton Sink. The Salton Trough forms a significant rift valley and continental plate boundary, and the region is rich with sedimentary deposits thick with paleontological remains. Within the park, researchers have uncovered everything from baleen whale bones to skeletons of mammoths. Pre- Columbian rock art and petroglyphs from the Cahuilla, Cupeño, and Kumeyaay tribes abound and reflect on a much cooler and more fertile history. 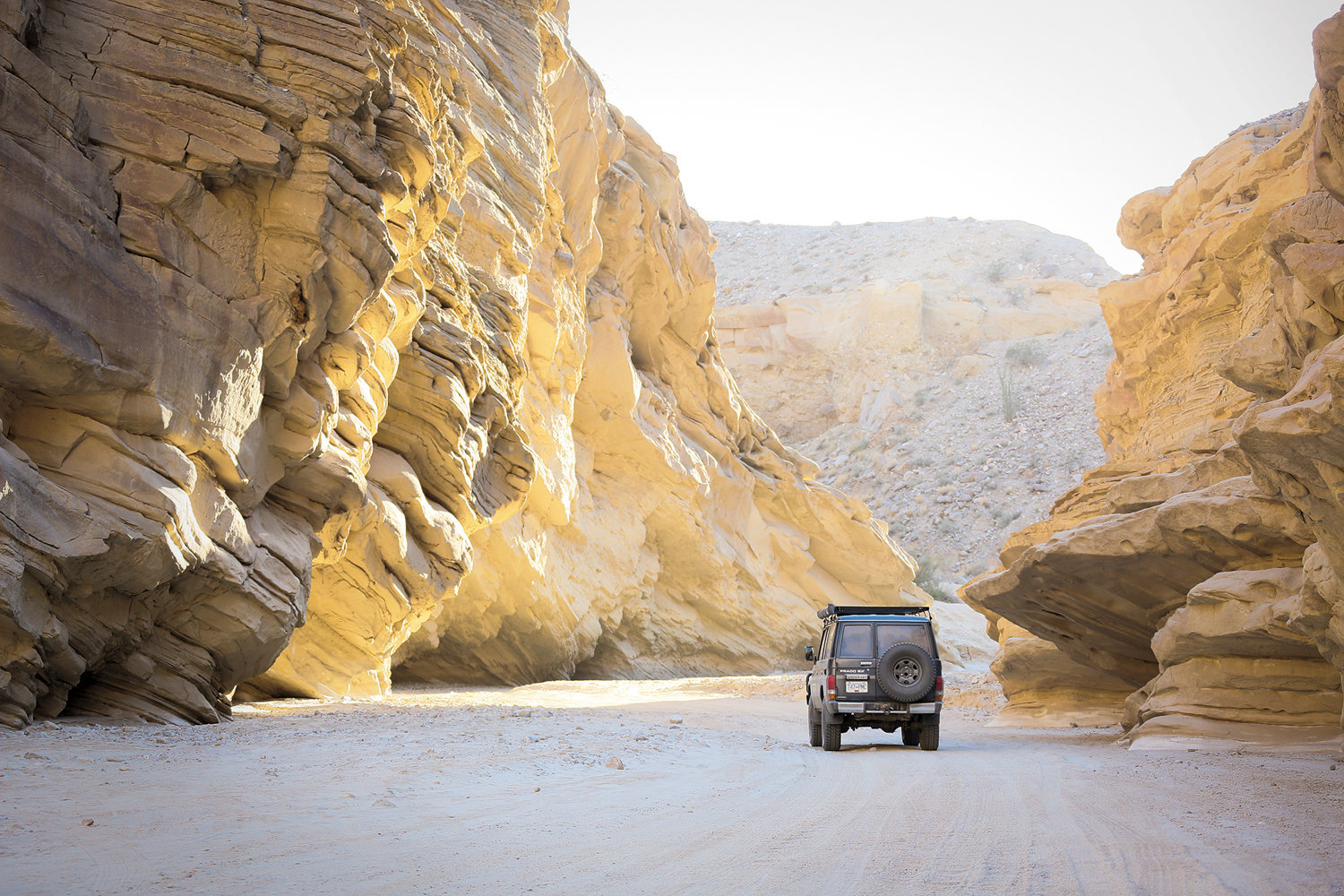 Despite being a desert, the plant life is surprisingly diverse, with ecological zones fueled by natural springs and oases, along with the higher elevation sky islands. California’s only native palm, Washingtonia filifera, resides here. Other flora includes creosote, ocotillo, palo verde trees, and various cacti. In the spring, wildflowers can dazzle. Higher elevations bring mesquite, catclaw, manzanita, oak, and even closed-cone pine.

Desert bighorn sheep can be found throughout the park, but few visitors will actually see this endangered species. Around water sources, you may spot extensive bird life, kit fox, coyote, greater roadrunner, and mule deer. Reptiles are also present and should be treated with caution: diamondback rattlesnakes are common.

This route is spectacular, traversing from north to south and intersecting many of the highlights of the park. Remember to fill up outside of San Diego or in Ocotillo before transit toward Borrego Springs and the start of the track. Almost immediately the desert opens up and the trail bisects the Borrego Sink and descends into the Borrego Valley.

At South Mountain Wash, turn south onto an increasingly eroded two-track on Borrego Mountain Wash Road. It is worthwhile to drive to the end of the wash, where steep walls encroach within feet of the vehicle. Exiting the wash is a steep, cross-axle climb. The trail continues south into sparsely vegetated open desert before turning east again toward Buttes Pass and Hawk Canyon (an excellent campsite). Crossing over Buttes Pass, the next destination is Seventeen Palms Oasis, a small but beautiful palm grove framed by Martinez Mountain in the background. 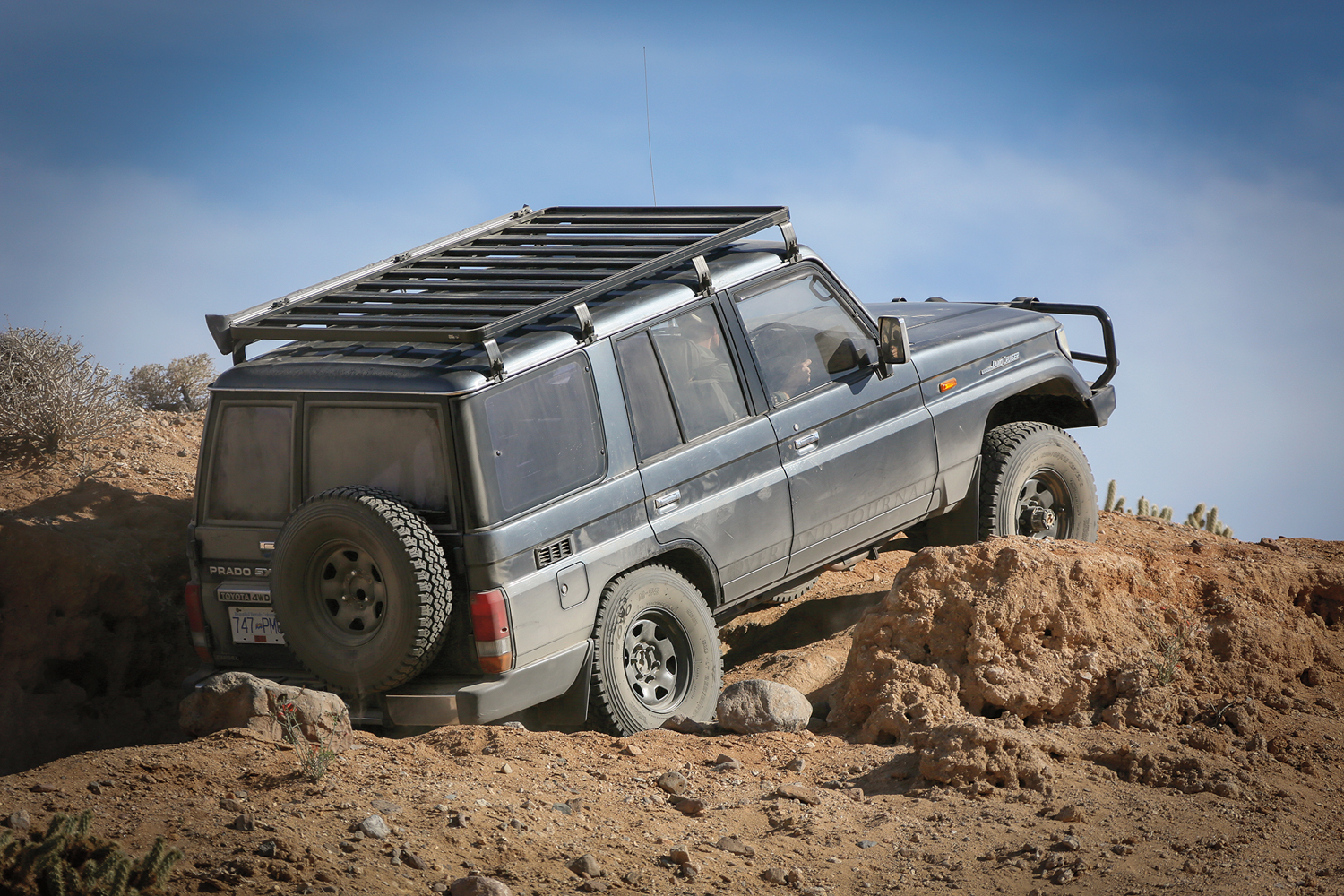 One of the more unusual features of the park is the Pumpkin Patch, a few acres of round sandstone concretions. The track then turns south and crosses Highway 78 at Ocotillo Wells toward Split Mountain and more technical terrain. This also provides access to additional campsites, including several on Fish Creek Wash. We found a particularly stunning site that looked back down the canyon toward a breathtaking sunrise.

Four-wheel drive low becomes a familiar setting for the rest of the route—Diablo Drop-off demands attention and steady progress. Continuing south into Arroyo Seco del Diablo, the trail twists and turns, and includes several rocky sections. This route connects with Canyon Sin Nombre Road and a scenic drive along the top of several ridgelines. 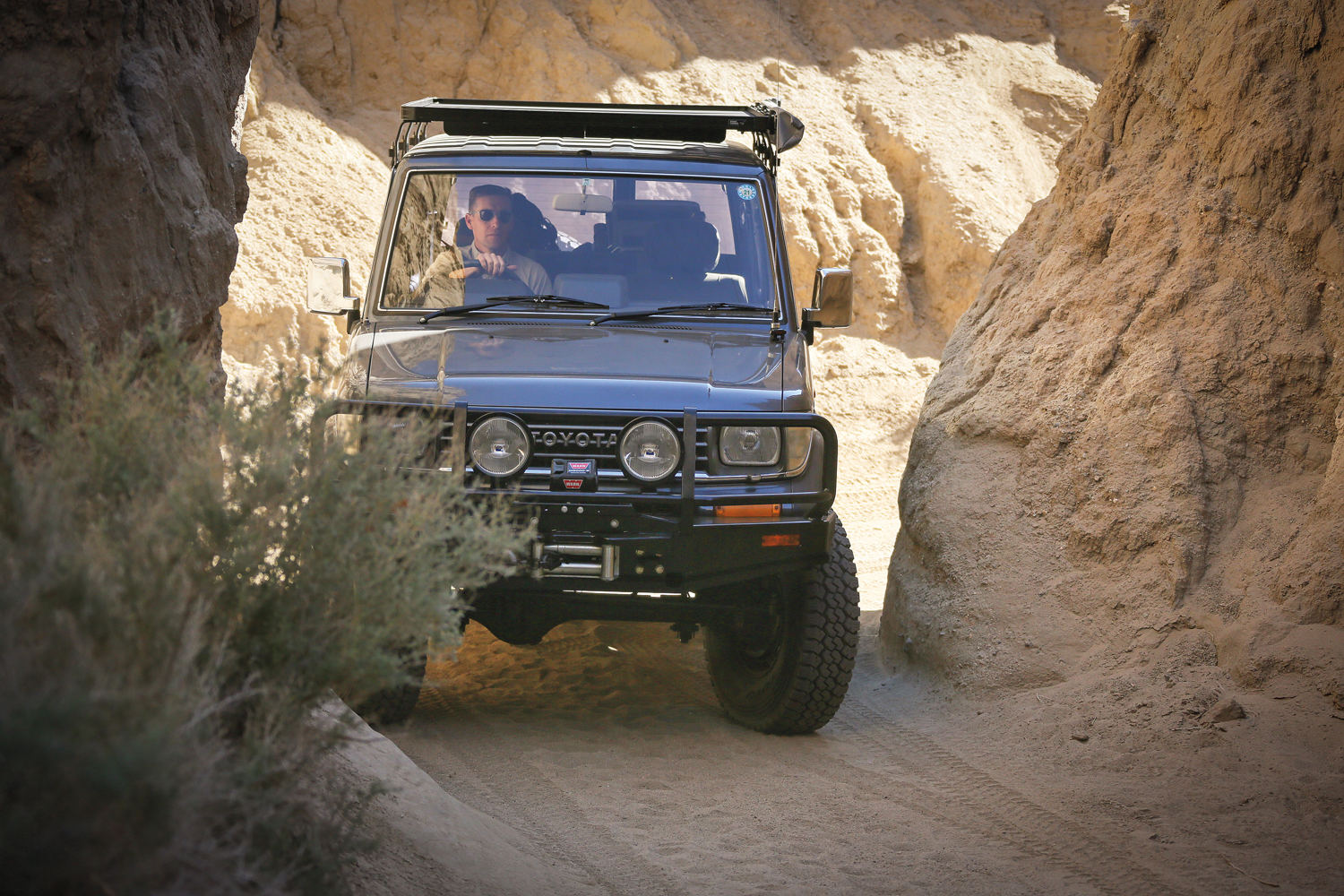 Conditions improve once the track turns southeast on Sweeney Pass Road, but returns quickly to dirt and a sandy wash toward the Volcanic Hills. Connecting with Dos Cabezas Road, it follows along a rail track and leads to the final campsite at Mortero Palms and another unobstructed sunrise. 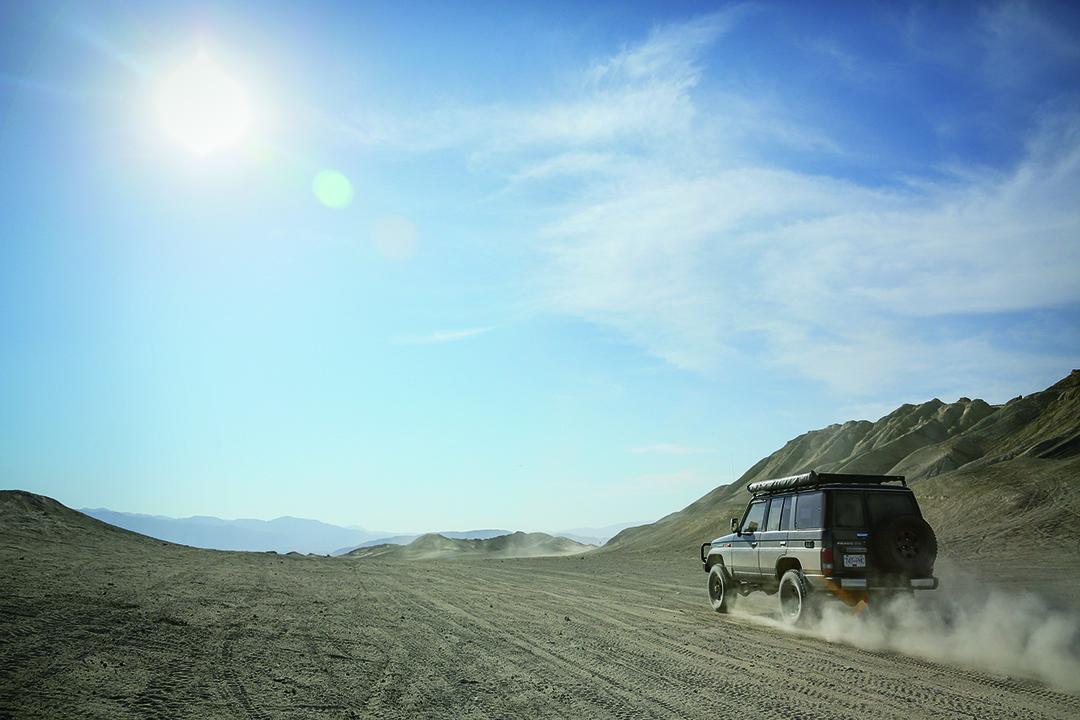 NORTHWEST ENTRANCE From Borrego Springs, head southeast to Yaqui Pass Road. Turn left and then immediately right on the first dirt track. This heads directly east and passes a group of homes within the first 300 yards. Continue on route.

SOUTHWEST ENTRANCE From Ocotillo, turn north on the Imperial Highway. The road will curve west and at 3.6 miles turns south into a group of wind generators, proceed on route.

Anza–Borrego is technical throughout, testing the limits of a stock vehicle with an experienced driver. Traction aids and 32- inch or larger tires are recommended, along with careful spotting to limit the potential for body damage. We do not suggest this route for full-size vehicles with large campers. 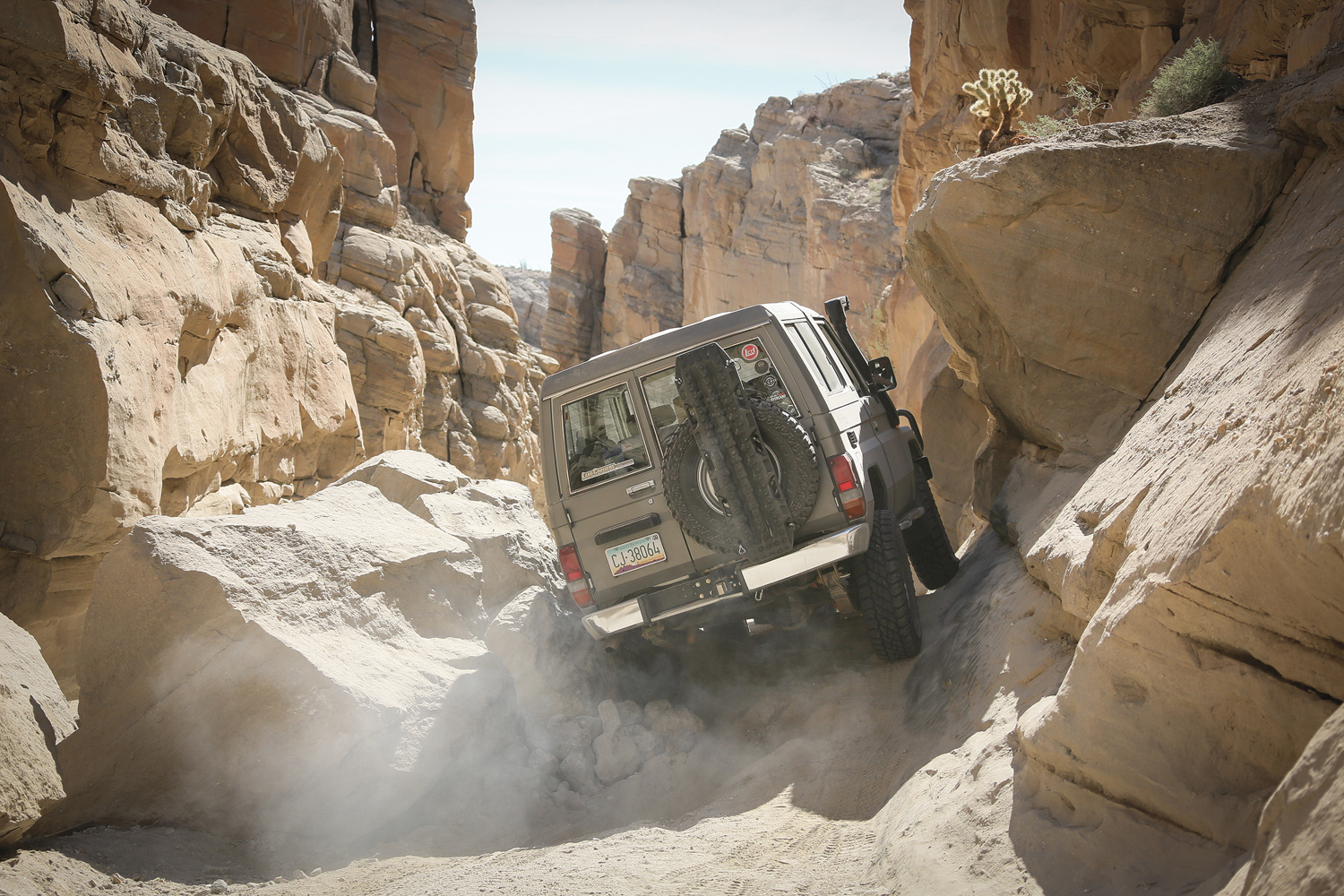 The Colorado Desert region is primarily arid terrain and there are benefits to traveling in fall, winter, and spring. Even early May can be 100°F. Temperatures can exceed 110°F in summer, so plan accordingly with extra drinking water and ensure a properly serviced and robust cooling system for the vehicle.

There are no permits required for traveling in the park, but some established campsites require reservations. Firearms are not permitted anywhere in ABDSP. Ground fires are not permitted. Pets must be leashed. 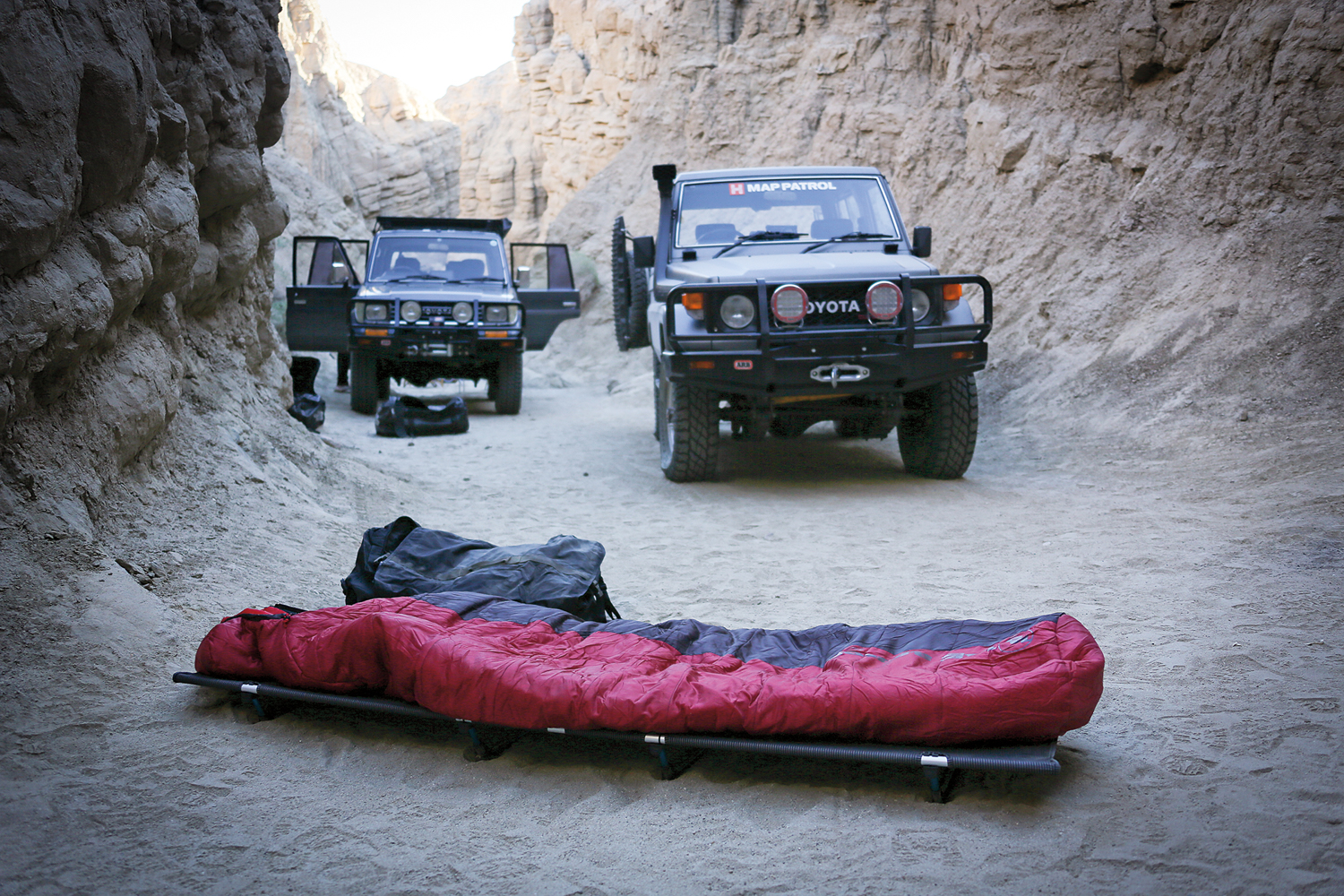 The state park map is excellent and can be downloaded here: parks.ca.gov/pages/638/files/ABDSPmap.pdf. As always, our team’s GPS track can be found by visiting the overland routes home page here.