Decommissioned military vehicles are generally sold at bargain prices and, in some cases, offer a viable platform for overland builds. In reality, many of these rigs are not practical for real-world use. Drawbacks often include abysmal fuel economy, poor build quality, zero interior comforts, and limited accessibility due to size. That’s not to say there aren’t viable options on offer, such as the Steyr 12M18 Expedition Truck, 1994 Mercedes 1824 AF 4×4, and the 2008 Iveco Magirus. If we’re discussing cost-effective yet proven military platforms for vehicle travel, then we have to mention the DAF Leyland T244.

This 4WD, Cummins-powered, go-anywhere truck was first utilized by the British army during the 1990s but was later adopted by travelers for global exploration (yet is half the price of a comparable Unimog). If you want a better idea of how this vehicle performs as a long-term home on wheels, I recommend checking out Matthew Payne’s DAF T244 –“Matilda.” Today’s T244 is one of the most well-travelled I’ve seen, spending seven years in Africa and two years in India. If unsold, it will continue its journey to Argentina before heading to Australia. As you’d expect from an expedition-proven rig, it showcases a huge list of modifications, accessories, and a fully-equipped camper conversion.

“My home can now be yours. She is an RHD manual truck imported into the US in November 2021, titled in April 2022 (I was away in India till April of this year. I have owned this rig for six years, two of which she was stranded in the UK during Covid.) [I] bought [it] in Botswana, Africa, from a South African pastor who lived in it for seven years doing his missionary work. He bought it from a young British couple who purchased it from an army auction in the UK; [they] built the T244 out and were on adventures around Africa, after which they sold it to the pastor who sold it to me. I shipped the truck to India and drove it around for two years on my organ donation mission before shipping it to the UK with a plan to drive her to Africa on the mission, but Covid struck. Now she is here in New Jersey on my mission to Argentina and Australia.” 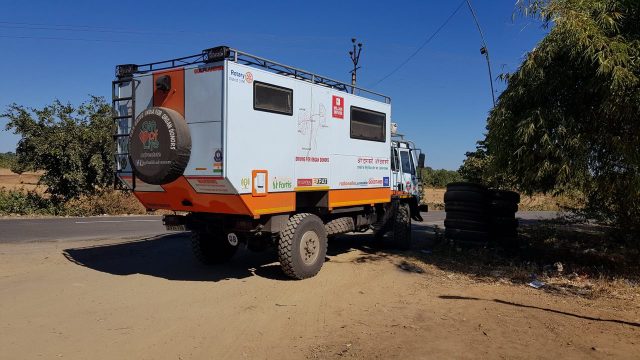 The DAF is fitted with a 5.9-liter 6BT Cummins diesel engine that produces 145 horsepower and 352 pound-feet of torque. Beep Beep Africameasured the T244’s fuel economy for more than 17,000 miles and stated you can expect a combined 13.8 mpg (with today’s seller noting economy to sit between 13-16 mpg). This T244 combines respectable economy with a considerable 600-liter fuel tank that provides enough range for even the most remote locations. The DAF is very capable, thanks to 4WD, huge ground clearance, a center locking differential, high and low range, and more.

This 1995 DAF Leyland T244 is listed for $90,000 and is currently located in East Brunswick, New Jersey. Check the full vehicle specifications via the original Expedition Portal forum post here.