There are a handful of items in the overlander’s inventory which seem to never go out of fashion, and radio communication systems rank high on that list. On our Expedition Portal forum we have a category dedicated to that one subject and it has accrued thousands of posts over the years. It is also a topic I approach with reluctance. Radio enthusiasts suffer no fools and quickly flog anyone with the nerve to ask a dumb question. I once misidentified a mobile HAM setup as a “CB” and was nearly thrown from a moving truck.

When I decided to dip my toe in the radio pool, I was quickly overwhelmed. It’s a confusing alphabet soup of letters like, CB, HAM, UHF, VHF, FRS, GMRS, MURS, and the two most common to me, AM and FM. After soliciting information from a couple of local radio gurus, I decided I’d eat this elephant one bite at a time and focus only on FRS and GMRS.

If you’re a radio neophyte like me, it’s helpful to review various radio services and how they apply to the end user. Most people with a casual understanding of radio communications are aware of CB, or Citizens Band frequencies. We’ve all watched Smokey and the Bandit, right? Ideally suited to short-range communications, CB comes with a host of drawbacks: poor clarity and congested radio traffic chief among them. The other commonly recognized segment of radio comms is HAM, or amateur radio.

The reasons many people elect to not go down that road is twofold. HAM operators must have a license from the FCC which is time consuming to obtain (but cheap), and much of the information required to pass the test is not particularly relevant to most users for their infrequent and casual needs. The other element to HAM that presents a deal breaker for many is the fact HAM gets complicated—quickly. Not everyone inclined to communicate via radio is looking for a new hobby, just a means of staying in touch with others in the field.

In 1996, radio users were introduced to a new system called the Family Radio Service (FRS). Aimed at casual users, these radios are a notch above basic walkie-talkies as sold in toy stores and Radio Shacks, the retailer to actually propose the FRS system to the FCC in 1994. FRS radios are limited to 500 milliwatts, which is a relatively low amount of broadcasting power, so they’re very short-range devices. It’s tough to expect more than a mile or two of reach with FRS radios and that’s with an unobstructed transmission from sender to receiver. On the upshot, they require no license and can be purchased cheaply.

In recent years another option, General Mobile Radio Service (GMRS), has stepped in to fill the gaps between CB and HAM. Only new in name, it has been around since the 1960s and has undergone a series of regulatory evolutions since. The advantage to the novice radio user is the additional broadcasting power. GMRS radios are allowed to broadcast at up to 50 watts on their dedicated frequencies. This affords the user better range and superior clarity. I’m no Radar O’Reilly, but even I could instantly discern a massive improvement over CB and FRS.

In just the last few years, GMRS has become increasingly popular because it works quite well with excellent transmission quality for short-range communications, plus the radios are easy to use and becoming more readily available. In best-case scenarios the range can even extend to over 30 miles. Setup is as easy as powering on, selecting a channel, and pressing a button to talk. User friendly as they are, the GMRS band does require an FCC license. Unlike HAM, there is no test to pass, but the fee for the 5-year license is a bit steep at $70.

One important point of clarification, many of the radios on the market equipped to use GMRS channels also offer FRS. These hybrids have invited confusion with regard to licensing. If you don’t have the GMRS ticket, you can legally use, and must only use, the FRS capabilities. Switch over to GMRS without that official authority and you risk stiff fines. For what its worth, getting the GMRS license was easy to do online, and while navigating the FCC site is a little clumsy, it wasn’t too bad. www.fcc.gov [Direct link to GMRS page]

With all of that out of the way, I was finally ready to charge up some radios and get to chatting. After doing considerable research, I settled on FRS/GMRS-equipped radios from the communication experts at Midland Radio. 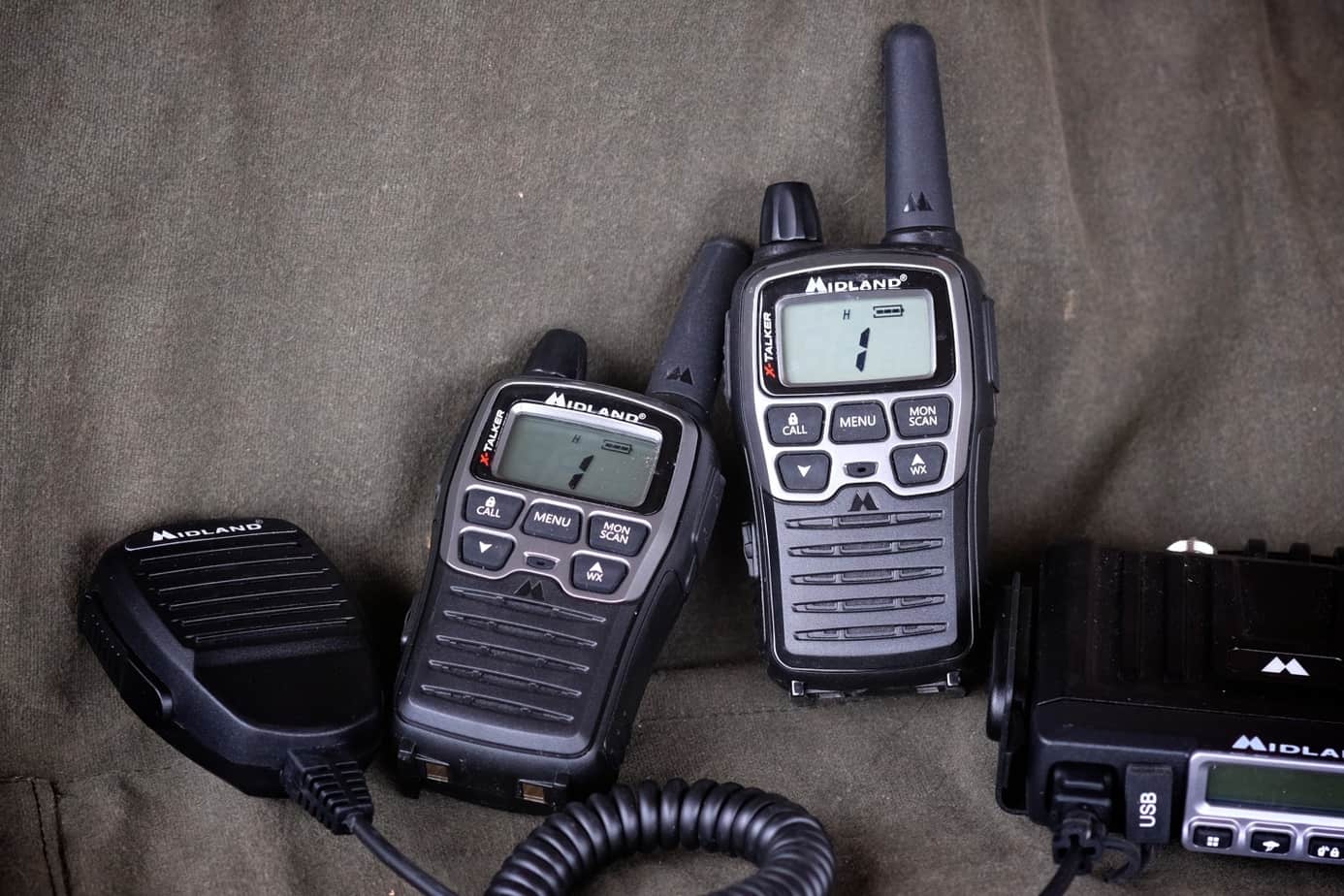 The premium handheld in Midland’s line of hybrid FRS/GMRS radios, the T71PV3 radio has received considerable accolades across a wide variety of markets, from hunters and campers to off-roaders and other outdoor enthusiasts. Compact and feature rich, the X-Talker kit I tested arrived with two radios, a quick-charger, belt clips, and two rechargeable battery packs. Considering how expensive modern electronics are, the $80 retail price seemed downright cheap.

With 36 channels allocated for GMRS and FRS use, channels 1-7 and 15-22 use the GMRS frequencies. Channels 8-14 are powered down to communicate on the license-free FRS frequencies. Adding to the utility of the X-Talker, 121 additional privacy codes provide users a clear channel without any cross-chatter from other users. 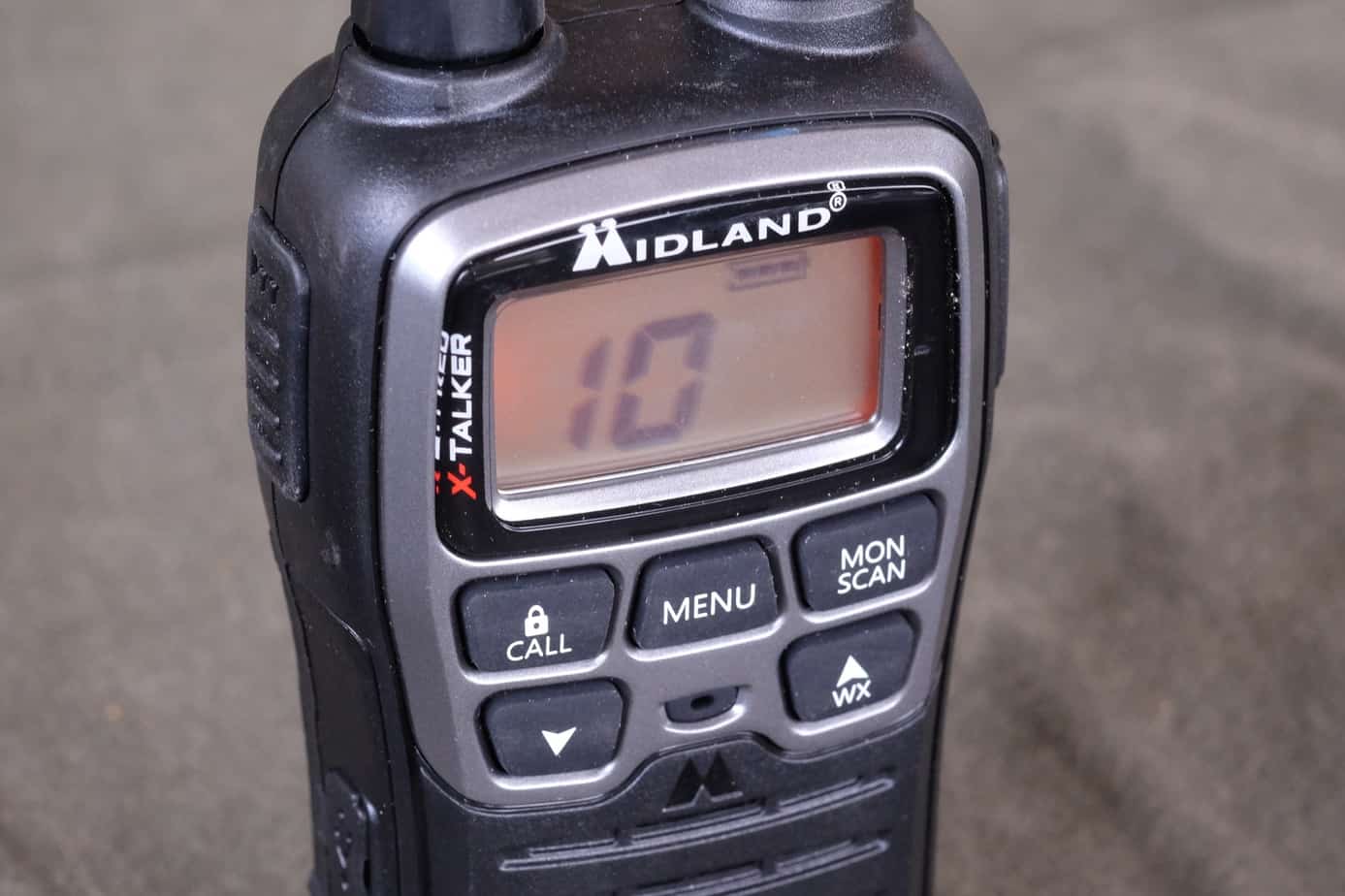 The X-Talker also includes a host of useful features like a scan function, 5 selectable call alerts, high and low power settings, a jack for external mic/speakers, voice activated communications, and even a “Roger” beep tone to replace the “over” users usually have to say at the end of each speaking sequence. There are also NOAA features to scan for weather updates and to alert users if severe storm events are looming. Each unit includes a USB charging cord and wall outlet plug for rapid charging. Even better, the rechargeable battery packs can be field replaced with standard AA batteries. In my preliminary tests, I was quite surprised how long the charge lasted. How much the units are used obviously impacts charge duration, but I found at no point during a full day of use did I worry about having enough juice. 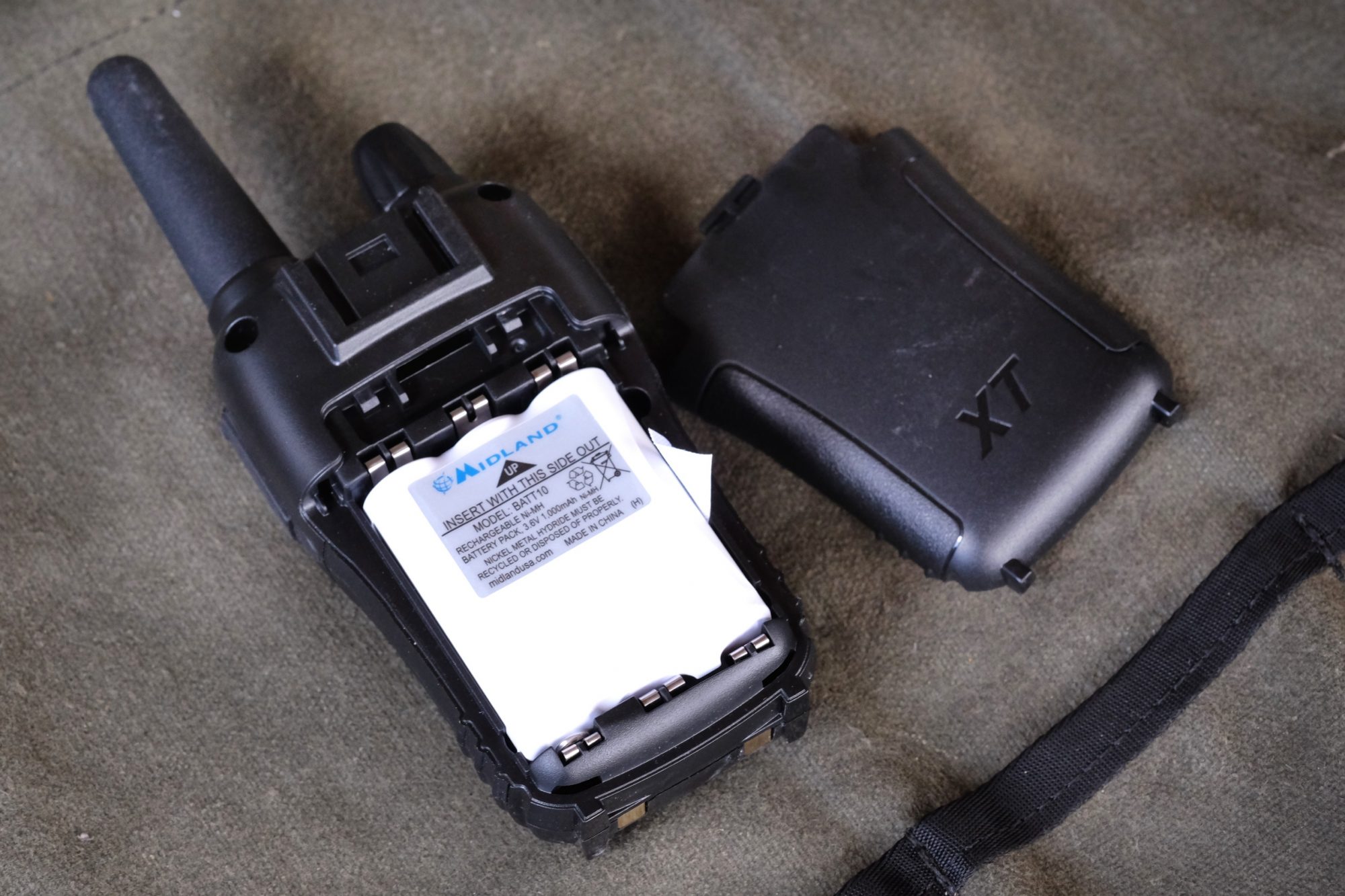 Perhaps the first and most noticeable impression during those initial uses was the impeccable clarity of the transmissions. Even in the mountains with a mile or two separating the units, the sound quality and lack of any background noise or distortion was a genuine surprise. I haven’t had an opportunity to test the range, but a 10-mile reach proved no problem on one outing. I also found the units easy to use and appreciated their sturdy build quality and compact size. Overall, I have been quite pleased with the functionality of the X-Talkers and seem to continually find more opportunities to put them to use. I imagine this is how a radio bug is born. 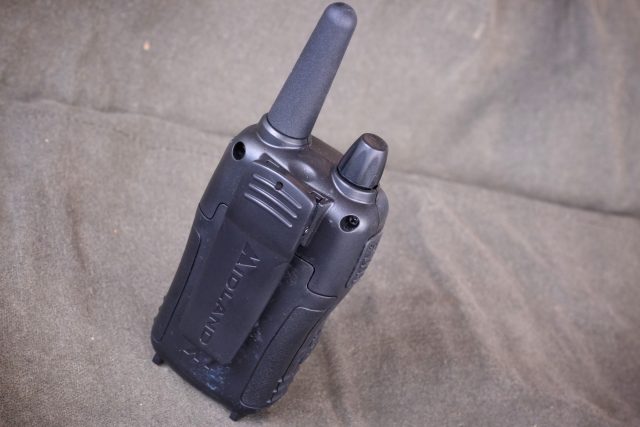 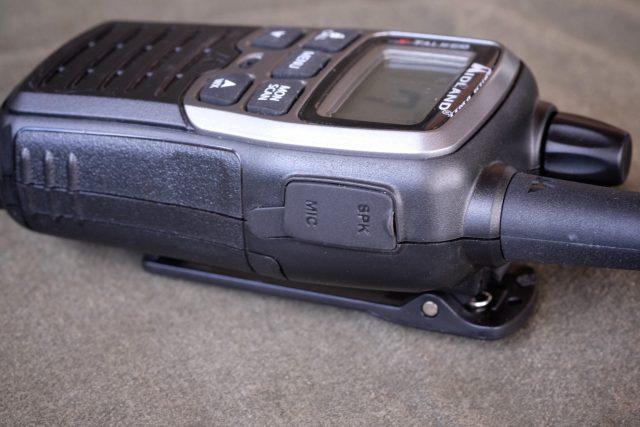 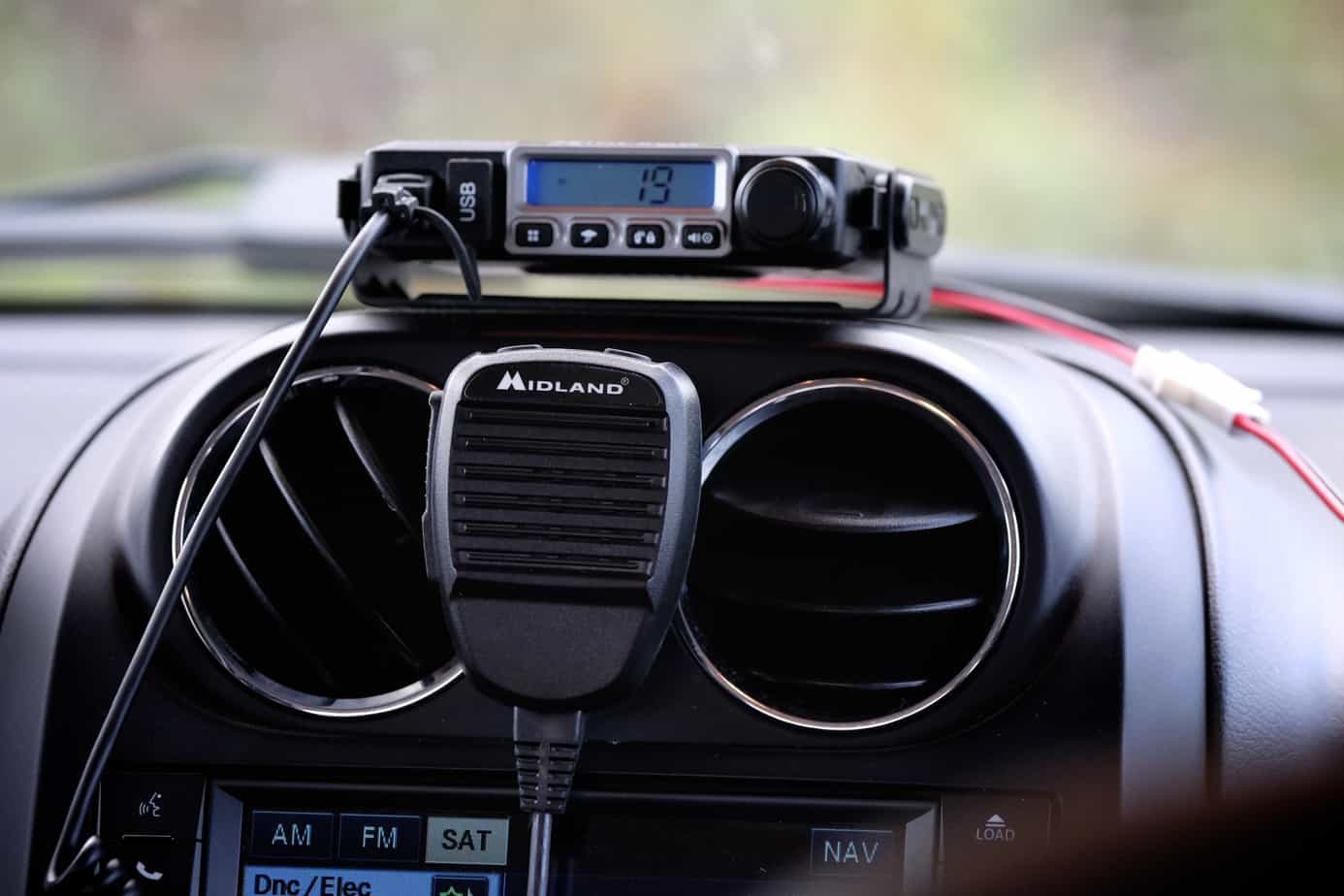 After cutting my teeth with the X-Talker handhelds, it seemed like a natural progression to extend my reach and bolster my in-vehicle convenience with a dash mounted system and the new MicroMobile MXT115 seemed a logical next step. If I am anything, I am not the kind of guy to rip out my dash and wire in a radio system, so the easy plug-and-play installation of the MicroMobile held strong appeal. I was able to install the unit without much difficulty and although I had to commit to exposed power and antenna wires, retained the ability to quickly move the unit from one vehicle to another with no fuss. Power is supplied by a 12v plug and the antenna cable is thin, easily managed, and connects to a small magnetically mounted antenna. From box to first transmission took less than five minutes.

While I was impressed with the range and clarity of the handhelds, the MicroMobile MXT115 provides three times the broadcasting power at 15 watts on GMRS channels. Like the handhelds, it has a full range of features with various NOAA weather alerts and radio functions as well as another trick up its sleeve: the ability to use GMRS repeaters via 8 dedicated channels. That capability is currently a tad above my pay grade, or at least beyond my immediate needs, but it’s nice to know it’s there. 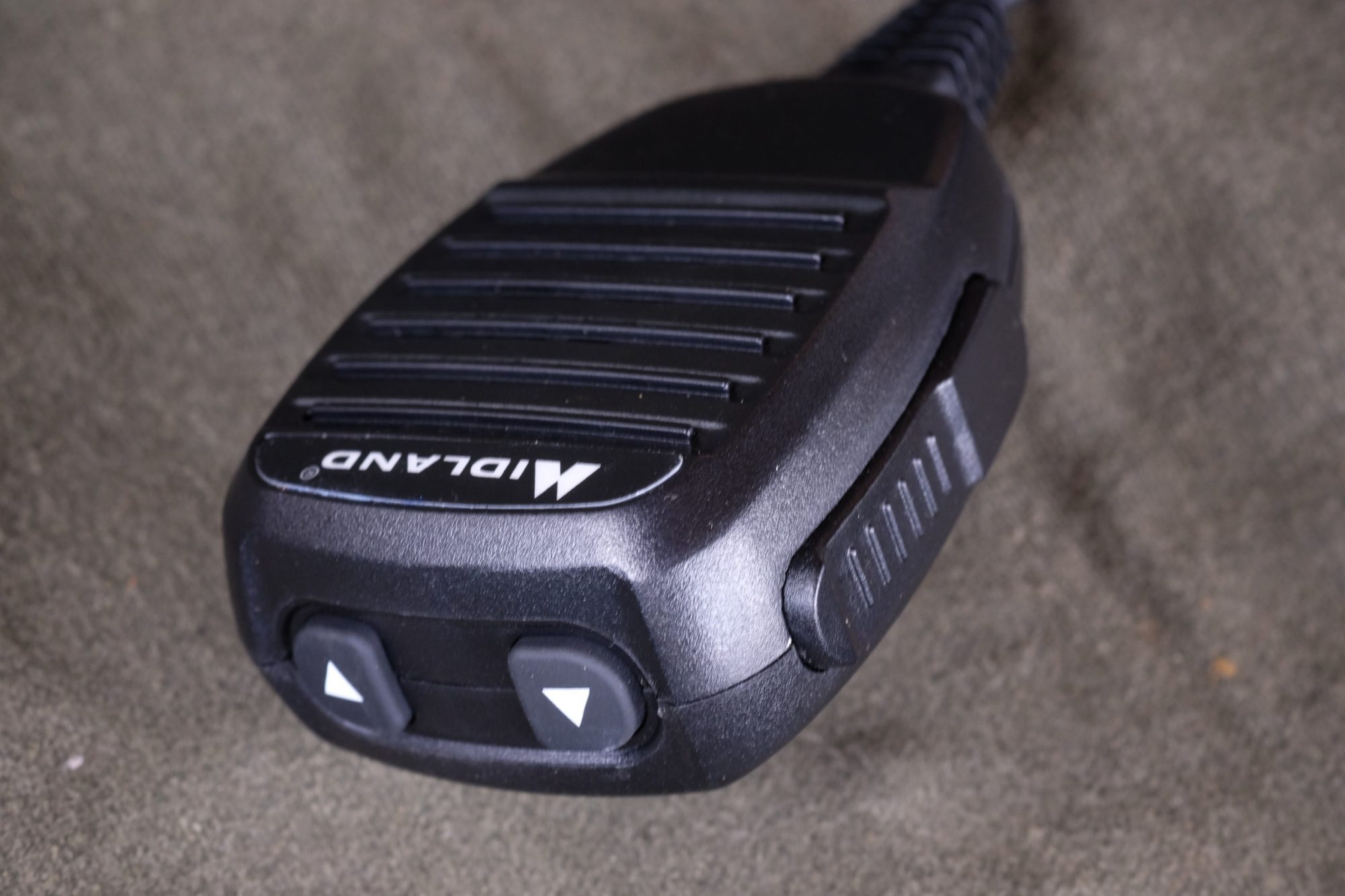 The unit itself is very compact and can be mounted in hanging or sitting position with the display flopped accordingly. I found the buttons a little small but tactile, and the functions intuitive to cycle through. Scanning all 15 GMRS channels was very quick and it never failed to find the activity I was hoping to locate.

Although I’m relatively new to GMRS, and radios in general, I’m glad I made the jump into both handhelds and the dash mount unit as it appears not everyone has made the same transition. GMRS is still relatively new in its latest format, so having handhelds I can lend to other travelmates has made the experience that much more practical. The range of the MXT115 is impressive with our longest test pushing well beyond 15 miles with considerable obstructions between units. The clarity of the transmissions continues to amaze me and makes me wonder why anyone still uses CB. 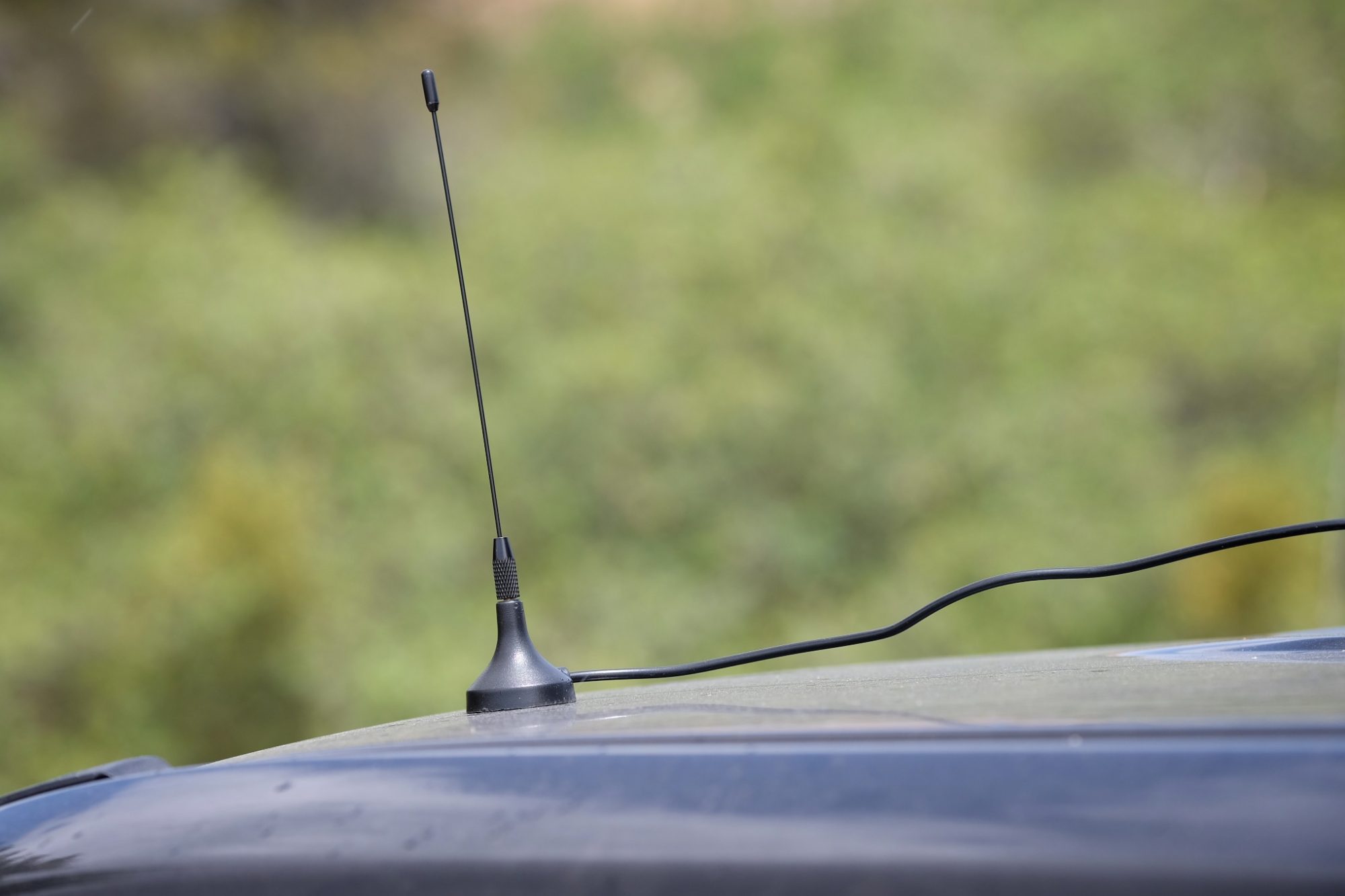 For the genuine HAM enthusiast I probably glossed over a considerable amount of technical information, but this is a review of GMRS radios by a novice radio user, for novice radio users. We all have to start somewhere and GMRS, particularly packaged within the X-Talker and MicroMobile products, might be the full beginning and end of my own radio journey. I don’t know what more I would ever need.

And with that, over and out.