Two years ago I moved to the mountains. Specifically to the base of   Silvertip Mountain, the tallest peak in the Cascade Range. Silvertip and the surrounding area has glaciers, meadows, lakes, hanging valleys, rushing rivers, waterfalls, ice caves, Grizzly Bears and, of course, views to die for.

It also has an old abandoned ski resort near the top of the mountain.

With 3 boys who are crazy about skiing and snowboarding, I knew we   needed to find a way to utilize this treasure in our backyard. Yet when the resort was abandoned almost 30 years ago, any winter road maintenance was abandoned as well. In fact the cost of plowing the road was one of the reasons the resort went under. Anyway, with an old dirt road cut into the hillside and buried under deep snow, it seemed my Defender 110 might not be the best option.

The first thought of course was to buy a few snowmobiles. But with a large family, big dogs and little kids, this option was quickly eliminated.

The next option was a snow cat. One of our neighbors bought an old Tucker Snow Cat at an auction, restored it and put a passenger pod on the back. It does look pretty cool, but when I went for a ride in the “pod” it was a bit like riding in a lunch box strapped to the top of a rototiller. Not something my family would welcome riding around in all day on a regular basis.

The third option was to get a set of Mattracks for the 110. Yes, their cost is about the same as buying another truck, but I felt at least this way I wouldn’t need to maintain multiple machines and, as the sales literature said, they were road legal and as easy to install as changing a tire. So at the beginning of the 2009 snow season, I took the plunge and wrote a cheque.

Well, two years later this is what I have found:

Not quite as easy as changing a tire; unless you are referring to a 400-pound triangular tire that doesn’t roll….

The reality is that the first time you install them you need to add some components to the steering assembly of the truck, install some hanging brackets around the rear trailing arms, and in order to get the pre-loads set, it’s easiest if you have the whole truck up in the air. Plus the tolerances the Mattracks are machined to are so tight that a mallet, heat-torch or ideally a hydraulic press are needed for some of the bits.

So while it was theoretically possible to install them on my (not-level, icy, uncovered) driveway (in the blowing snow), I instead chose to bring the truck to a workshop in the nearest town, about a 25-minute drive down the mountains (when I have the wheels on). At the shop it took 3 guys a full weekend to do the install. This is in a heated shop with a truck lift, a forklift and full tools. Subsequent installations now only take 2 guys, the forklift and one day in the shop since some of the components can be left on the truck all year.

2. Driving on the road

One of the coolest things about the Mattracks is that they are rubber so they are road legal.

The only route between the town and my house includes a highway and   there are minimum speeds you need to be able to attain to be on the highway. The Mattracks have a recommended top speed of 40mph on the   pavement. Above that and the rubber heats up and wears quickly. So depending on your highway rules and how strict the local law enforcement is, you may be fine.

The challenge, however, is not attaining a high speed, but rather the vibration the speed causes. The tracks are rubber but they are still tracks. They cause a lot of vibration. And as each one vibrates individually, at speeds above 25mph they begin to resonate. This can be brutal on both the driver and the truck. As the Defender is bolted together like a Mechano set, not welded like most modern trucks, the vibration can have the effect of shaking the truck apart. I find the best solution is to drive slowly on the gravel shoulder, below the resonance speeds, with the hazard lights on. This means it is a 90-minute drive home, but at least I know all the bits of the truck are likely to make it home with me.

This is where it gets very interesting. I have a few different sets of tires for the 110, including a set of 35″ tires with aggressive ice chains, and also 38″ mud tires.

The 35’s are good all-rounders. Aired way down (6 psi) they will handle a foot of fresh wet snow with hard pack underneath. And the chains are great for icy inclines.

The 38’s are good for up to 2 feet of wet snow. However, as they are quite big and I only have a 3″ lift with minimal fender trimming, I can’t run them with chains on, or in conditions needing extreme articulation, without worry of tearing my fender flares off. So if it’s 2 feet of fresh wet snow (or 4 feet of dry powder) on a level road, they are great. In other conditions, not so much.

The tracks shine where the others falter – very deep fresh snow, for example. I had one day where I was driving through a high-alpine meadow on a lee slope so I knew it was wind-loaded deep fresh snow, but I wasn’t 100% sure how deep the snow was or what was under the windblown stuff. The Mattracks were only sinking about 8″ into the surface, but the trees all looked smaller than I remembered them from the summer.

When I hopped out of the truck and onto the snow I sunk all the way up to my chest. When I dug a pit it turns out it was about 4 feet of fluffy stuff on top of a loose base that was another 4 feet thick. There’s no way I would get through that on any of my tires. In fact there would be no way for me to even winch more than a couple of feet through that. But with the tracks on we just floated on top.

Where the tracks struggle off-road is on icy slopes, especially side slopes. The rubber treads of the tracks are not siped and on ice, while they perform better than most tires due to their large footprint, they can still slip in extreme conditions. Luckily you can now buy carbide ice-studs that are screwed into the rubber lugs using a standard cordless drill with a socket on it. You can then unscrew them again if you need to do a long pavement drive.

So, should you get a set?

If you are a good heavy-duty mechanic and plan to trailer your rig to the snow anyway, buy a snow cat. You can get two decent used snow cats (or 4 fixer-uppers) for the price of one set of tracks.

If you are thinking of running tracks on the weekend and switching to tires for the weekly commute, I would suggest just getting a second car to take to work.

But, if you are in a place with regular deep wet snow and can afford to mount your truck on tracks and leave them mounted all season, they are fantastic!

Americas Overland - The Driving Handbook
by Donald Greene
From $20From CAD$29.71 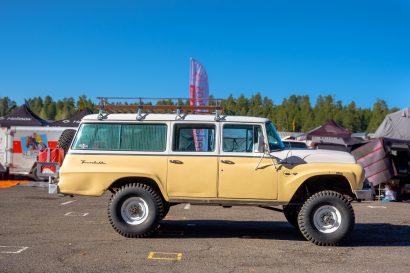 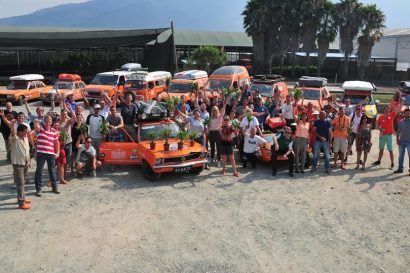 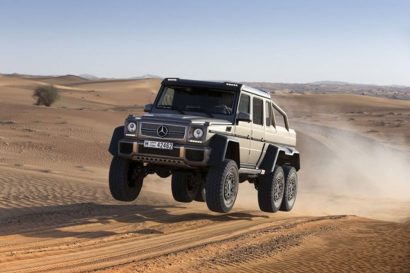 When Too Much is Not Enough