The BC Overland Rally is one of a few overland events where the Canadian flag flies; tangy ketchup chips, sweet maple syrup, and foodstuffs from Tim Hortons grace participants’ camp tables; and beanies are known as toques. Rally goers abide by kilometer signs en route to the event site in Merritt, British Columbia, and vehicle imports are limited at 15 years (rather than 25 south of the border). Admittedly, as the overland scene explodes in popularity in the US, we’ve been a tad slower in the Great White North, tentatively dipping our toes in and testing the (often freezing) waters. That’s not to say that the Canadian overland market hasn’t risen to the challenge, however. As Canucks, we’ve contributed to the vehicle-based travel phenomenon for sure, often with our own twist. To illustrate, here is a roundup of several Canadian vendors that shined at this year’s BC Overland Rally, stuff you definitely won’t find at your local Canadian Tire store. 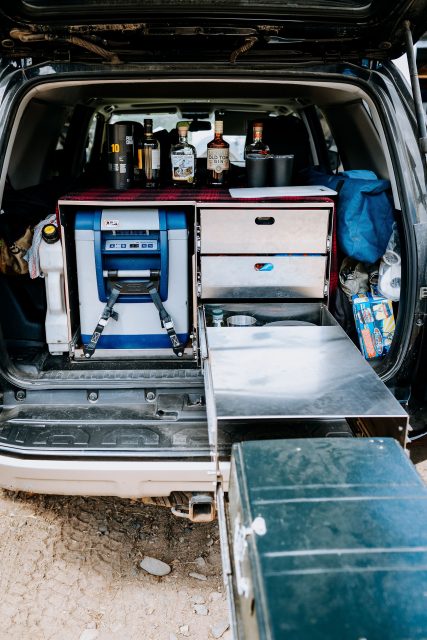 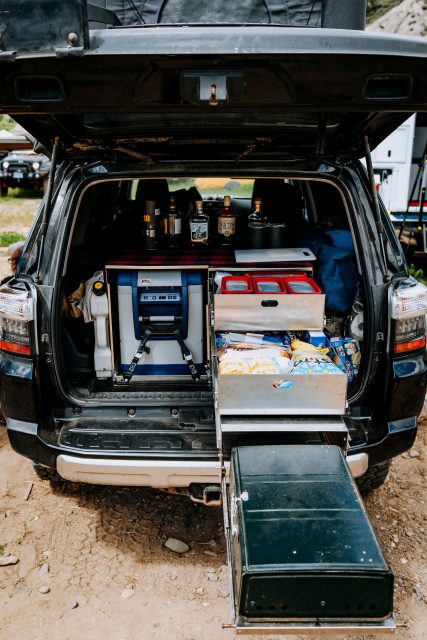 Overland Kitchen founder Al Smith knows how to make a cocktail, choose a top-quality whiskey, and make a low-key but delicious meal. Hosting several gourmet cooking, whiskey sharing, and iceless cocktail classes from the back of his 4Runner, these exhibitions weren’t just fun for participants at this year’s Northwest and BC Overland Rallies, they also showcased the 100 percent food-grade, stainless steel prototype kitchen unit he built nine years ago. The idea caught on, and now, Smith manufactures drawer, stove, and fridge cabinets, individually or as a complete kitchen unit. Former Expedition Portal Senior Editor Chris Cordes provided a detailed rundown of the Overland Kitchen in his Field Tested article; it’s worth a read if you’re eager to learn more about this system.

The most recent addition to Smith’s product line is the Truck Bed Expedition Kitchen, which Australian overlander Dan Grec is running on his 2021 Jeep Gladiator Rubicon build. During the design process, Al focused on constructing something that could live in a truck bed, exposed to the elements, but without a topper or cover. “When I built the truck kitchen, I wanted it to be as dust-sealed as possible. The fridge is at the back of the pull-out, which is sealed, and there are metal HEPA filters back there. You can pull them out and wash them when you need to so you can drive down dusty roads without killing your fridge.” Other features include a 59-inch pull-out with a storage unit, a prep surface, space for a fridge, and up to a 22-inch stove with pot and food storage areas. Units fit in any truck with a 5-foot (or larger) bed. 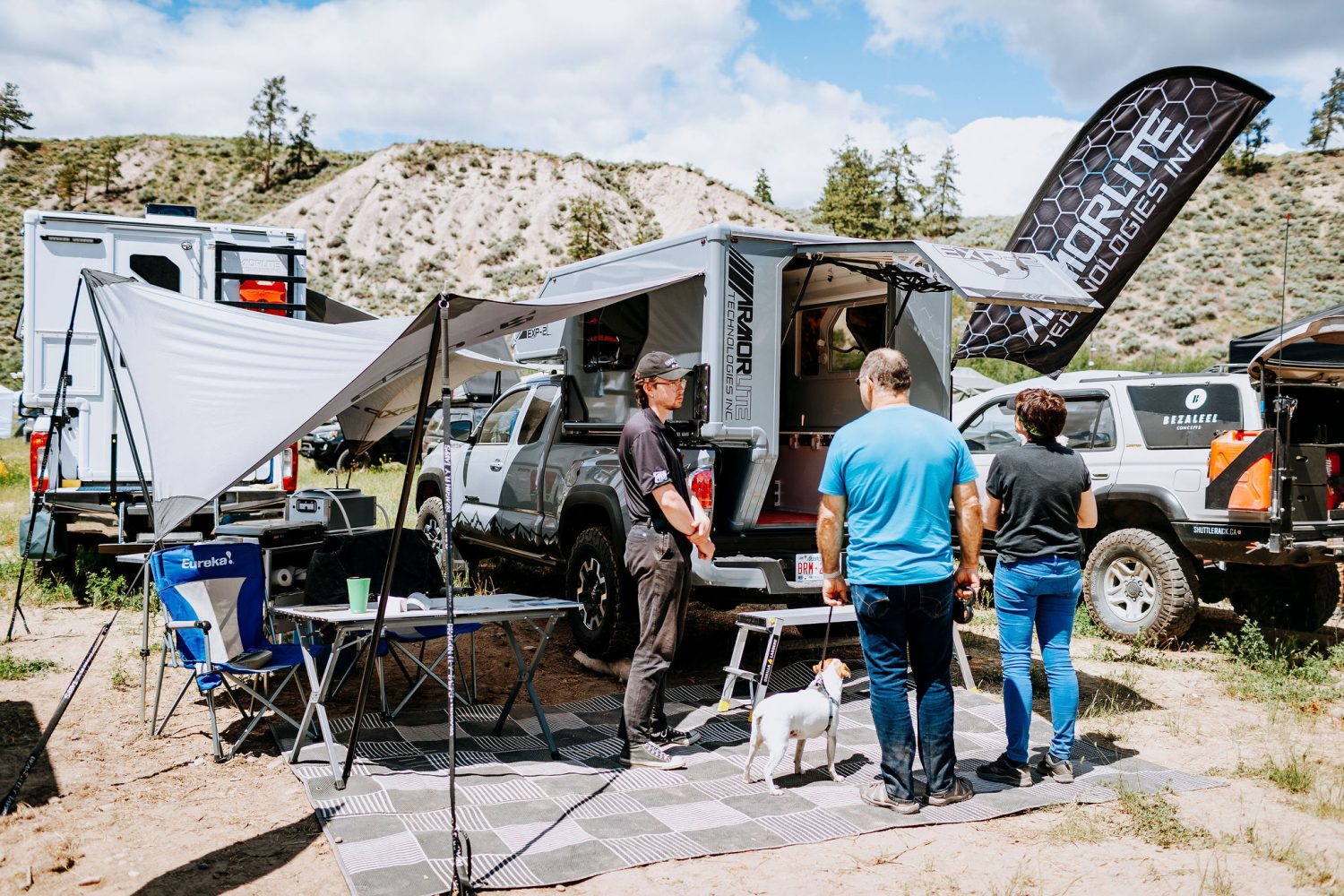 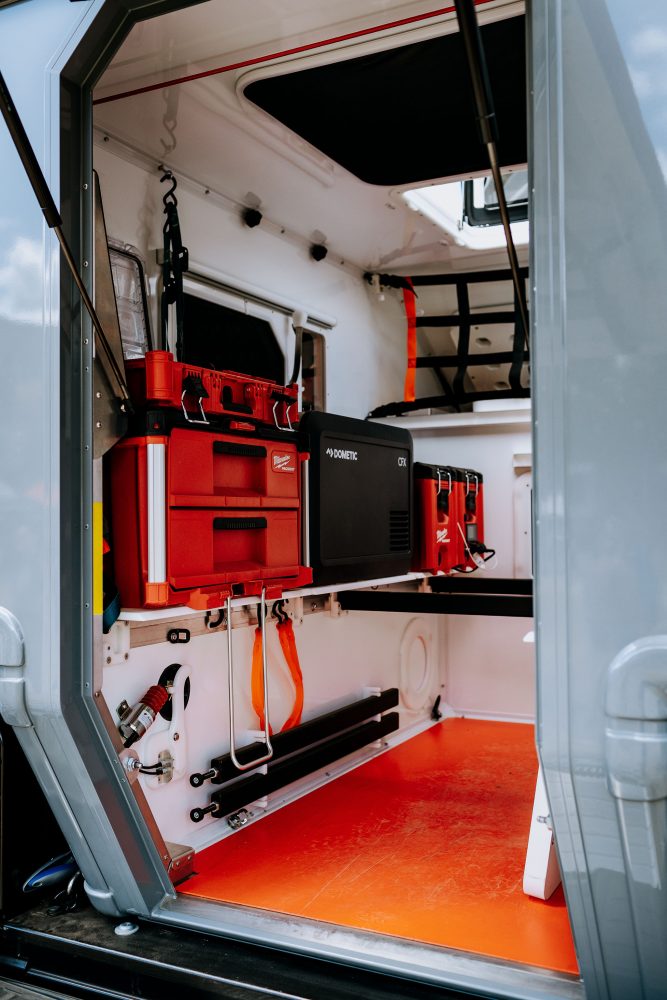 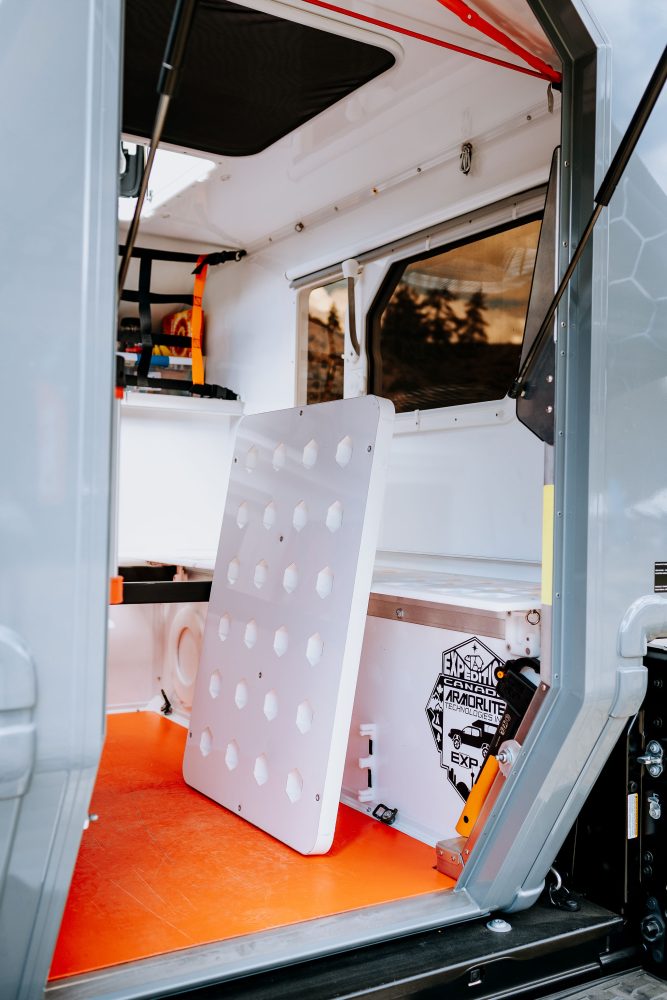 Armorlite Technologies founder and director Jason Levesque has been building traditional radiography darkrooms for medical and oilfield use since 2006. As a result, he’s learned a thing or two about the importance of robust and lightweight slide-in truck units that can withstand the rigors and abuse of ripped-up roads and inclement Canadian weather. “Whatever we’ve learned from that industry, in terms of what works and what doesn’t, we’ve rolled into our camper line,” Levesque explains. 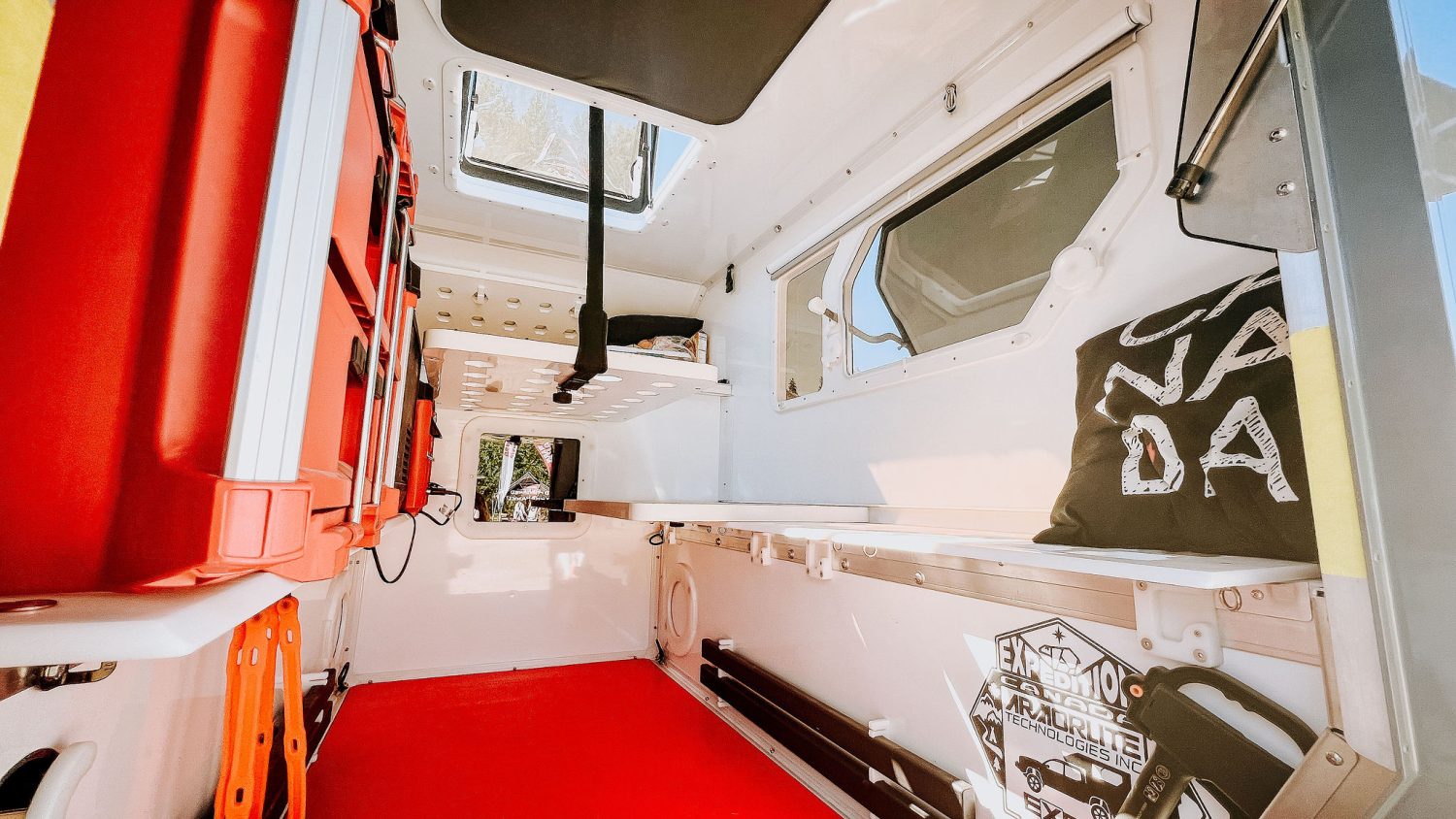 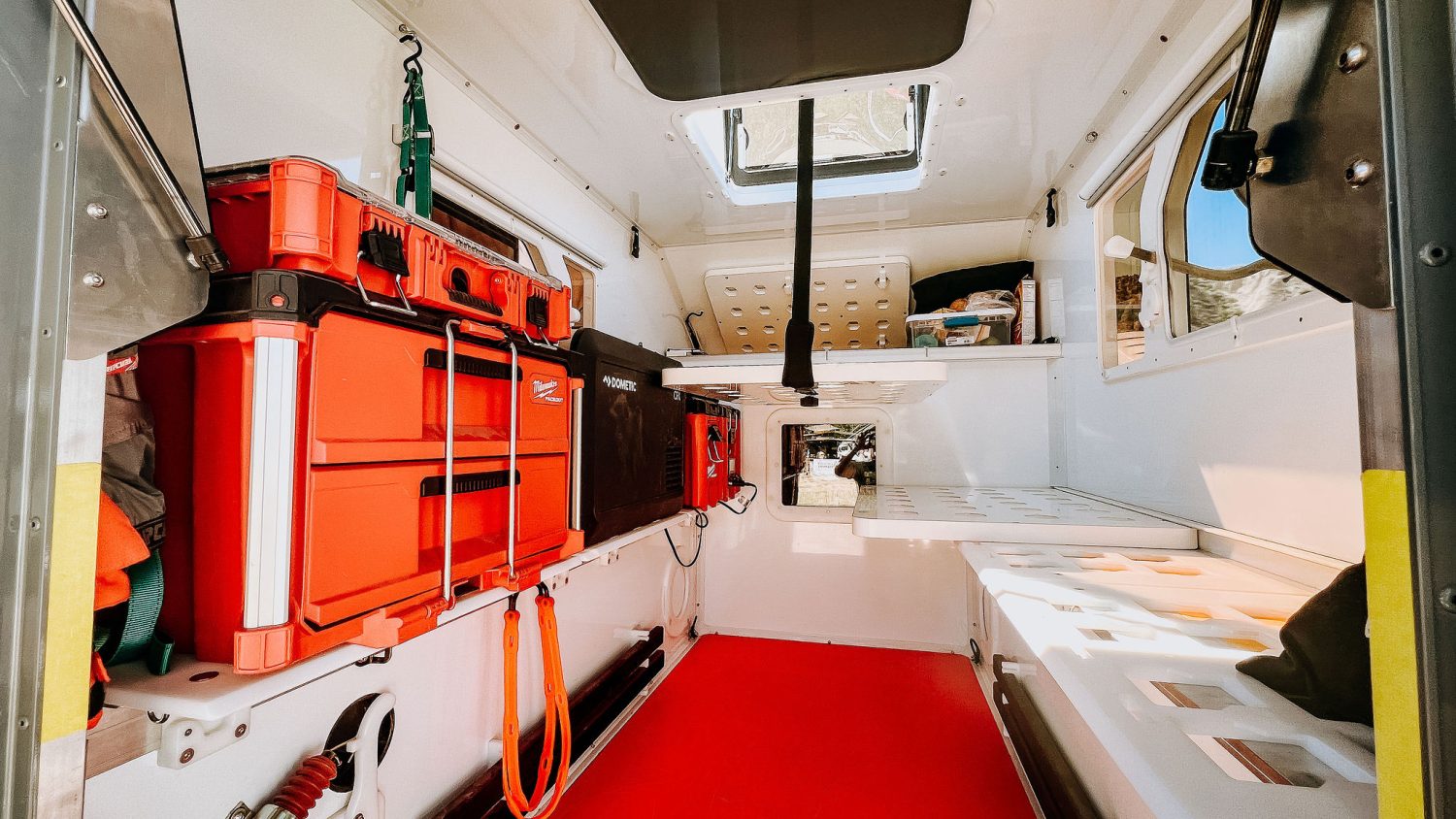 Edmonton-based Armorlite Technologies’ overland offerings include the full-size EXP-1 and the mid-size EXP-2. The EXP-2 was highlighted at the Northwest and BC Overland Rallies and weighs a mere 583 pounds, constructed with structural-grade aluminum and a high-density insulating core. In addition to being lightweight, the camper includes a modular interior that is fully customizable. Two bed bunks can be configured in several permutations and combinations, allowing space for a mountain bike inside or 10 feet of sleeping room for folks over 6 feet tall. Everything, Jason says, is built with more than one purpose. “We’ve been on the road now for two weeks. With two full-grown adults inside, I thought it was going to be a little tight for us to sleep in there. It’s fantastic. It’s performing as well or better than we expected.” 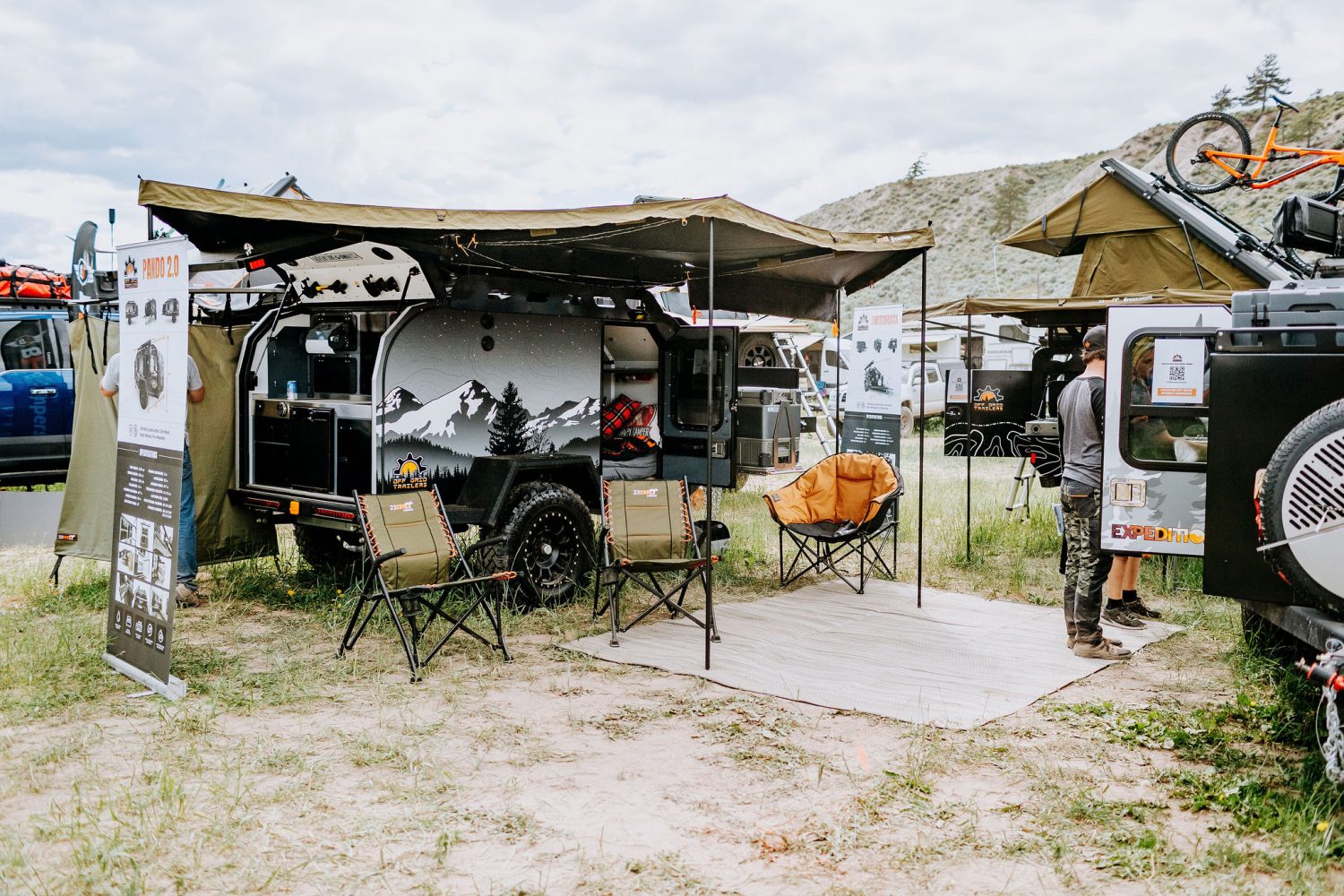 Off-Grid Trailers is no stranger to the Overland Journal team. The Edmonton-based company’s Expedition trailer won the Overland Journal Editor’s Choice award in 2018, while the Expedition 2.0 made a splash with Publisher Scott Brady in 2020. A lengthy features list includes a complete kitchen galley, Eccotemp L5 on-demand hot water, plenty of functional storage boxes, and more. 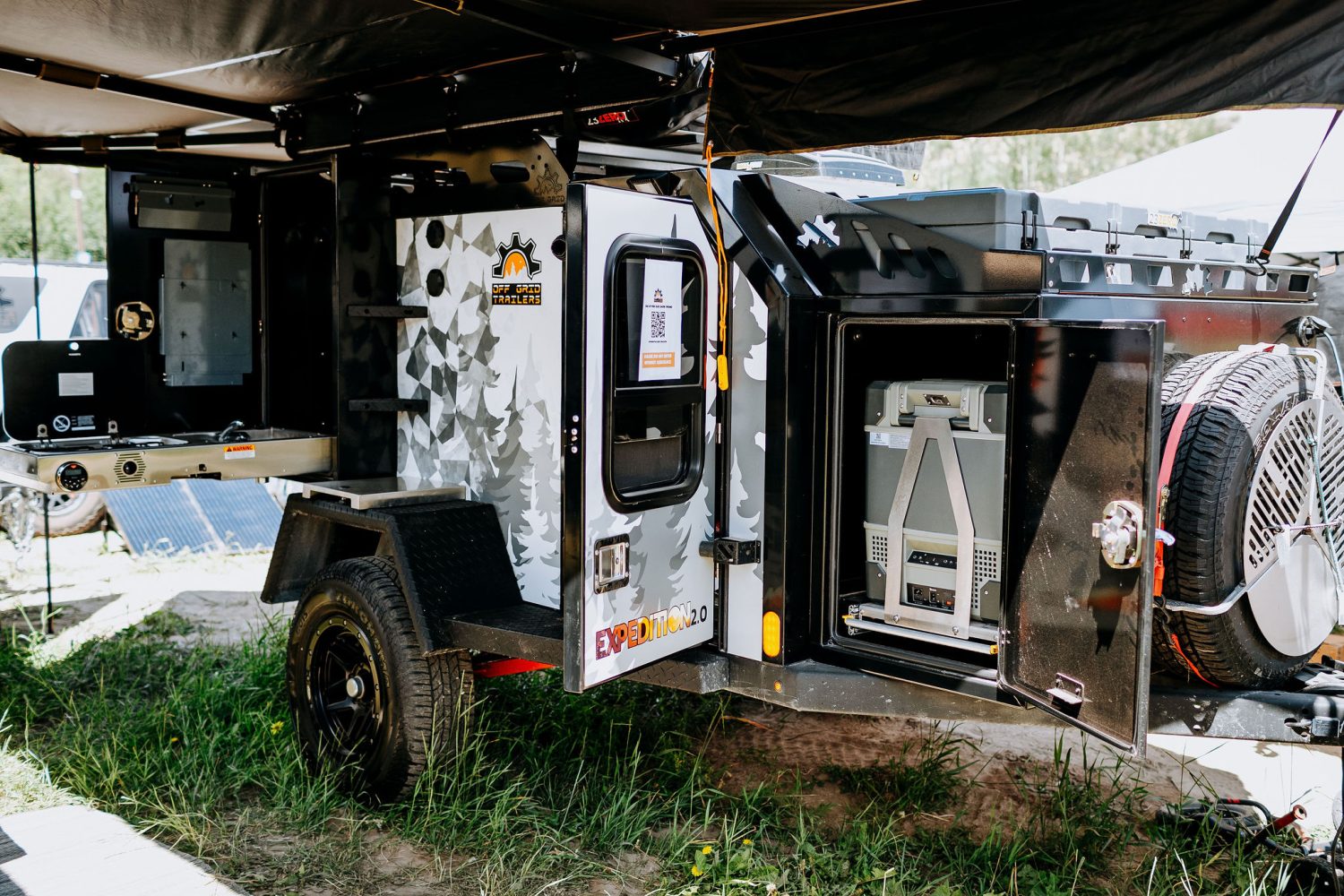 Off-Grid’s latest endeavor includes the newly released OGT Evolution Series suspension system by Fabtech Motorsports, an upgrade available on each trailer. The system features 8 inches of suspension travel, powder-coated coil springs, and 2.2-inch Dirt Logic shocks. “We wanted to offer a little bit more capability, a little bit of a smoother ride, and help with the longevity of the trailer,” said Off-Grid Marketing Manager Kory Davis. “That’s going to help your electrical system, your plumbing system; all of your connections won’t get shaken as much.” 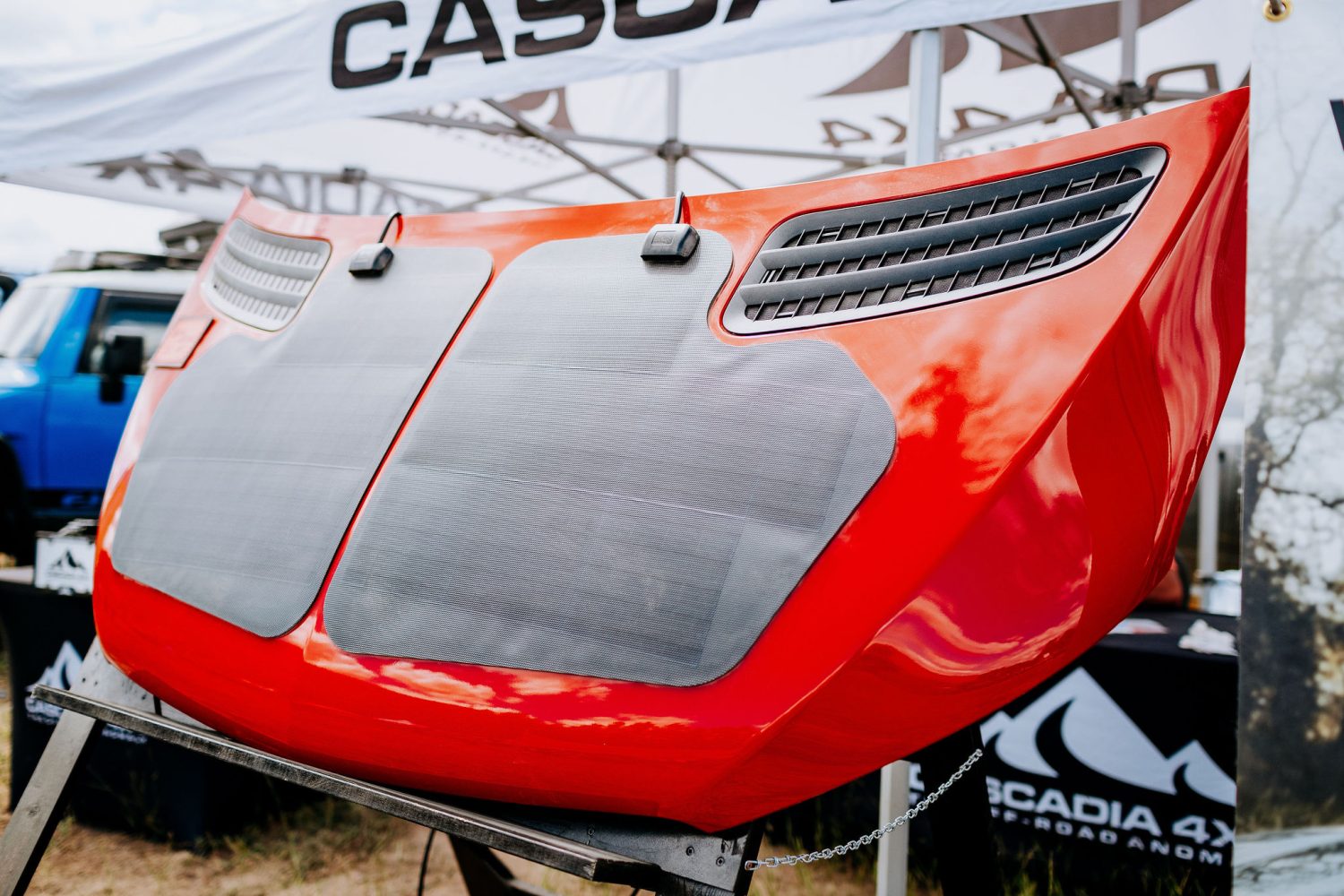 Founder David Loretto says that Cascadia 4×4’s line of hood-mounted solar panels was created by happy accident. At the Northwest Overland Rally in 2018, Loretto and Co-founder Thomas Dyakowski were promoting the Flipster, their winch license plate mounting system, when Dyakowski’s Jeep, which was parked behind their booth, experienced parasitic draw. The pair slapped some generic solar panels to the Jeep’s hood, which, to their surprise, caught the attention of rally goers throughout the weekend. “We left that show going, well, maybe we should make something that is designed to be on the hood of a vehicle. That spawned the whole vehicle-specific solar system.” 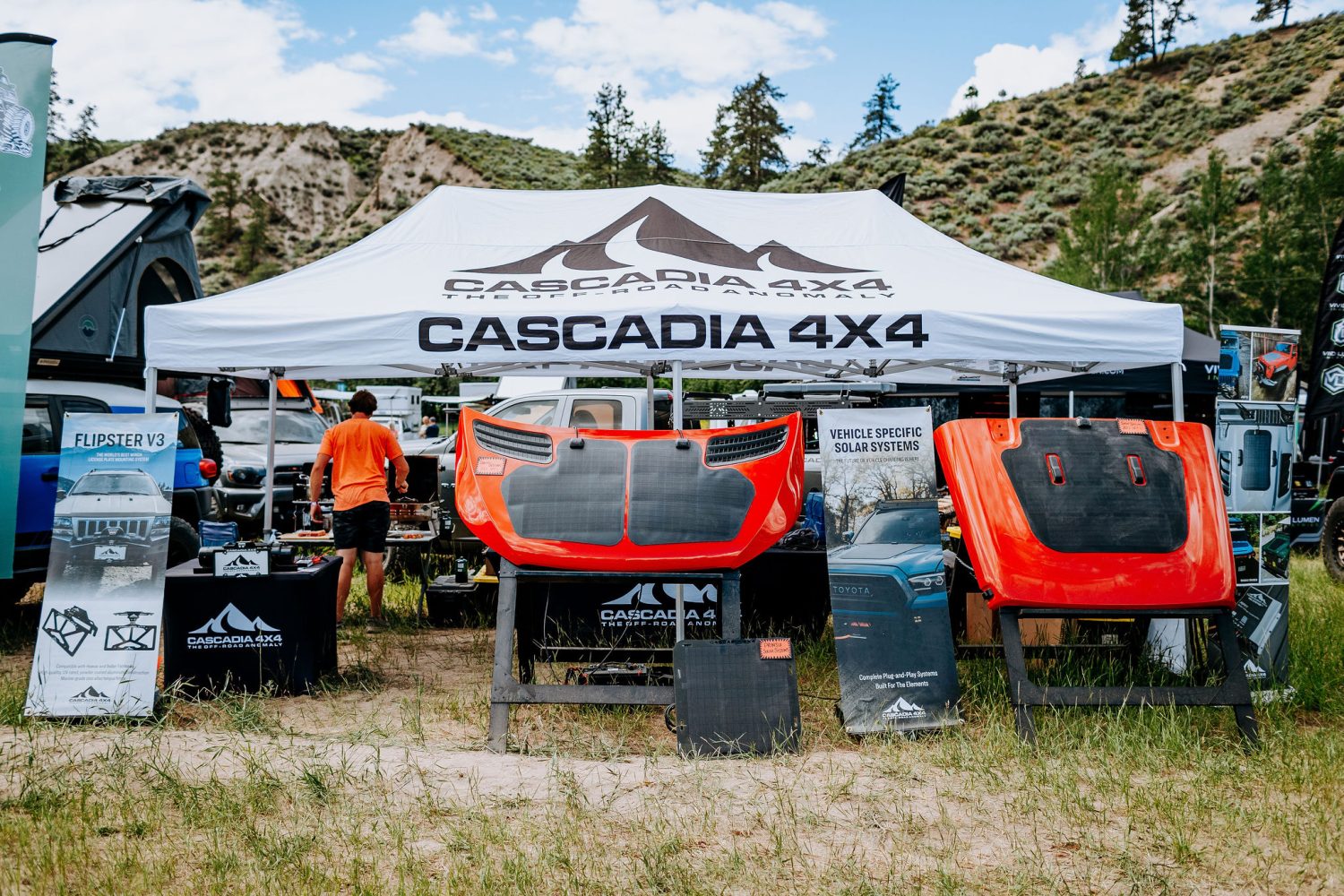 Based out of Canada’s adventure capital, Squamish, British Columbia, Cascadia 4×4’s Vehicle Specific Solar Systems (VSS) hard-mount to the hoods of most vehicles, providing a constant flow to the primary or secondary vehicle batteries. Acting as a trickle charger, users can run 12-volt accessories like refrigerators, lights, and laptop chargers throughout the day. The company also sells solar systems that can be integrated with rooftop tents and roof racks from iKamper and Prinsu. 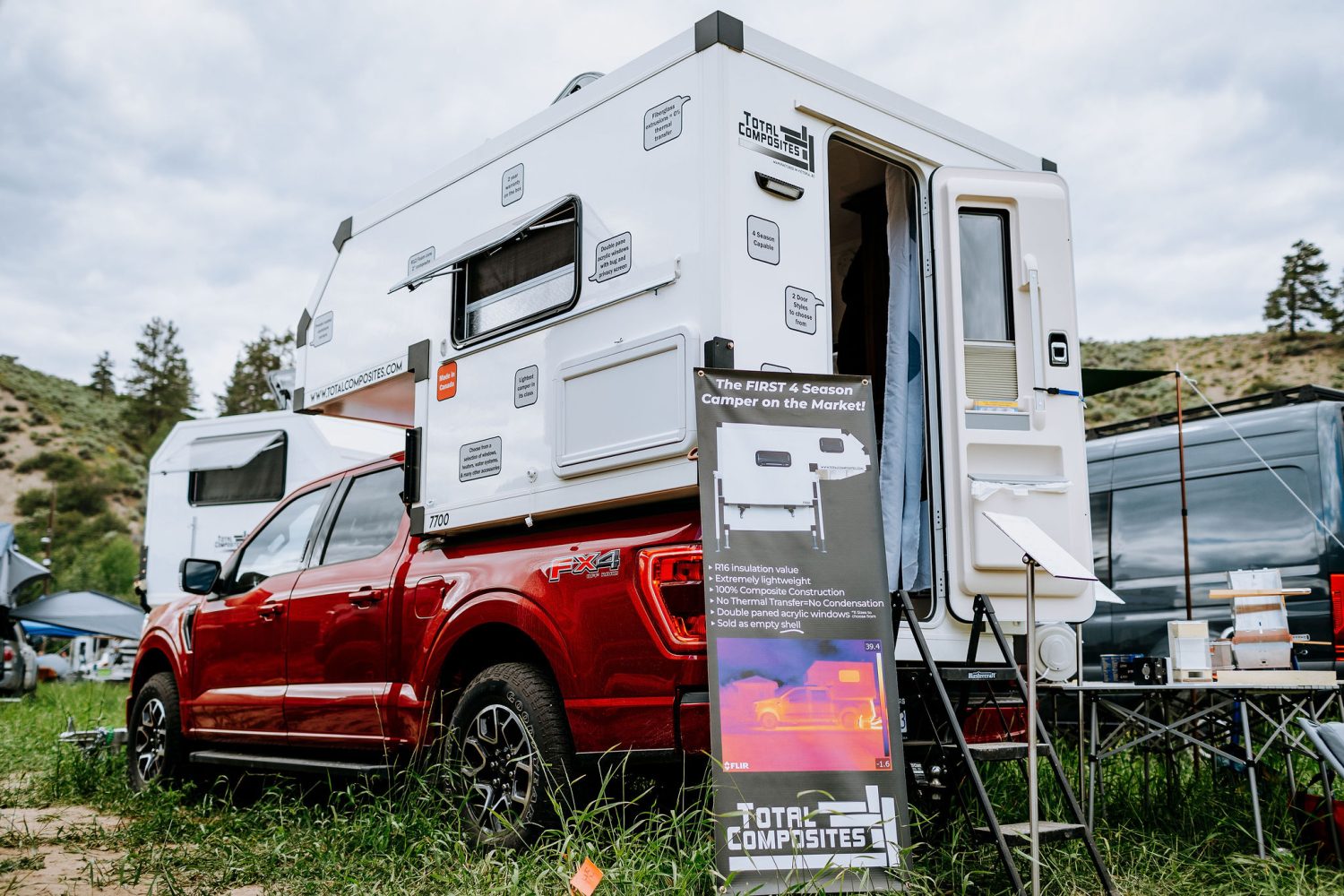 Characterized by monstrous red cedar trees, a lush green canopy of ferns, spongy mosses, and a host of fungi, the Pacific Northwest is well-known for its temperate rainforests. This coastal region, including Vancouver Island, has a reputation for its rainfall. Despite the fresh, fragrant beauty of the old-growth forests and expansive pebble beaches, many long-term inhabitants escape to the interior of British Columbia to be reunited with the sunshine and refill their stock of Vitamin D.

Camping in this environment long-term can be like visiting the underworld: dark, damp, and dripping. “The problem with thermal bridging,” says Total Composites Founder Andreas Schwall, “is that no matter how powerful your heater is, in the Pacific Northwest, condensation appears on the interior of the camper in the off-season.” Based in Victoria, British Columbia, Total Composites offers eight slide-in and flatbed truck options featuring 2-inch-thick foam core panels, no thermal bridging, and no metal or wooden studs. Fiberglass extrusions tie everything together, resulting in a lightweight, 100 percent thermal-transfer-free camper. The shells are customizable, so customers can work with dealers across North America to add solar systems, accessories, cabinets, and other creature comforts. 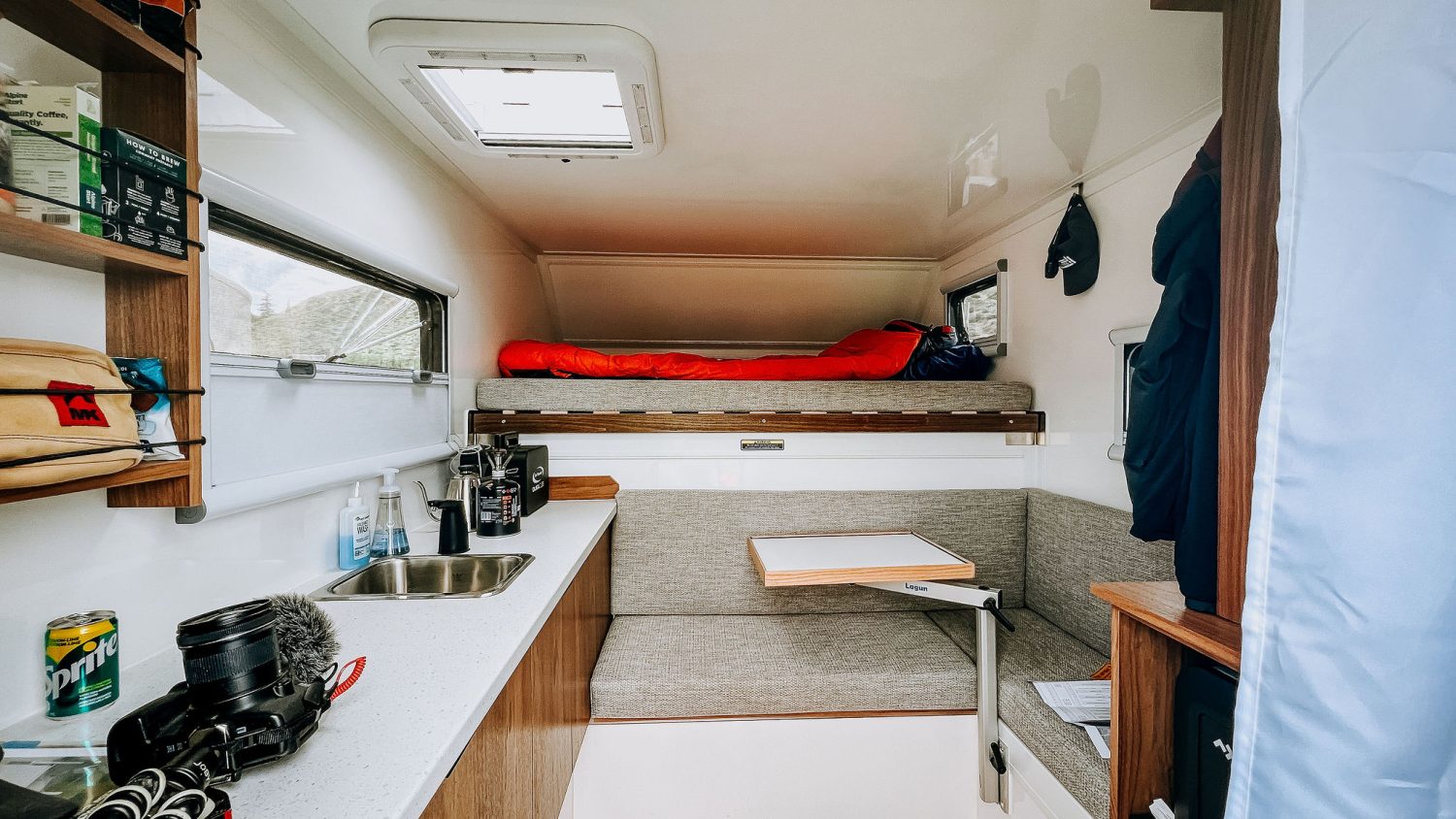 Many years ago, Schwall built expedition trucks in Germany. After arriving in Canada, he wanted to build his own but couldn’t find suitable materials. “We have a long history of composite construction in my family. I sourced the panels from a family factory in China and shipped them to Canada. It just snowballed from there.” 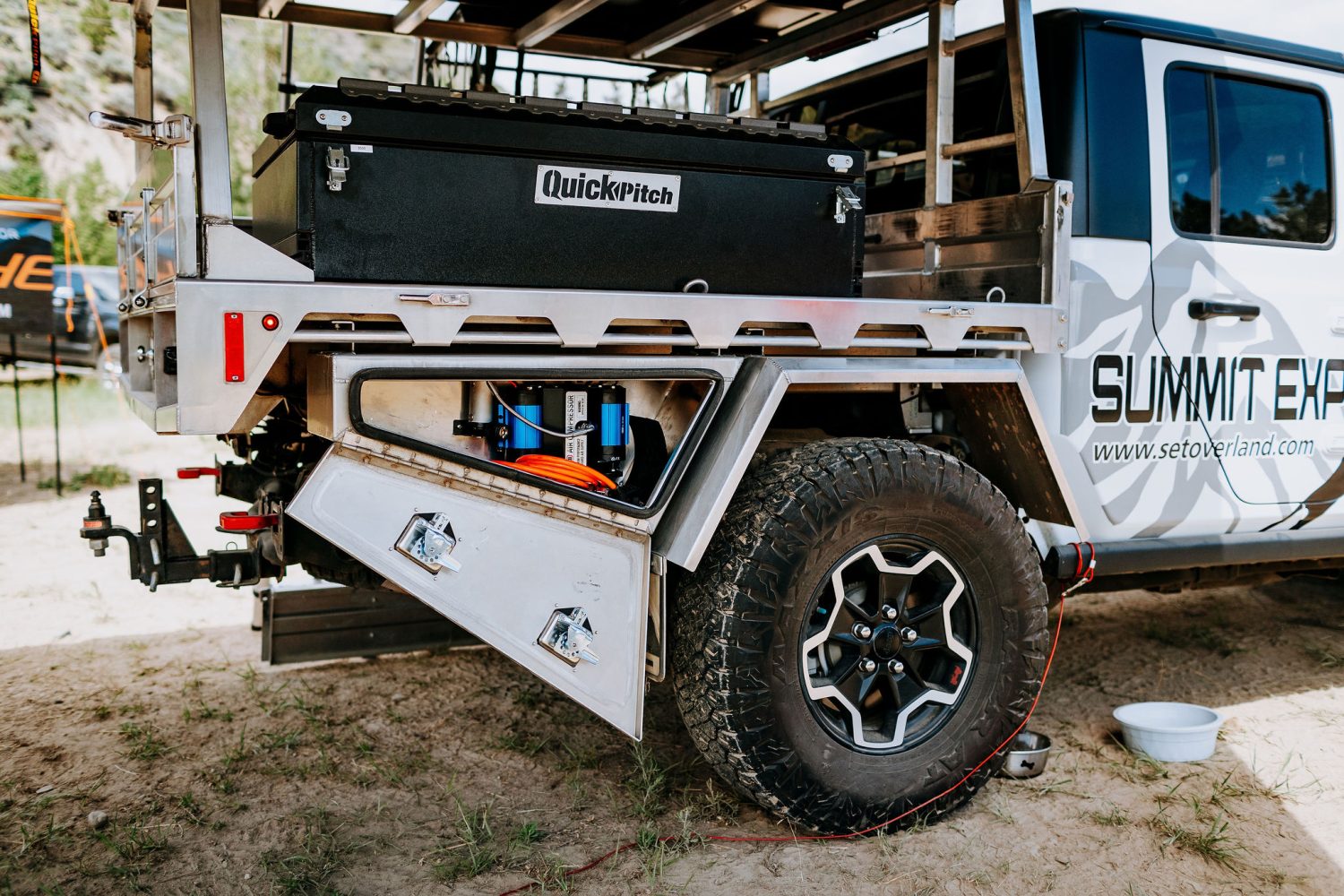 Summit Expedition Trucks owner Ralf Schneider admits he’s a big fan of Australian-made flatbeds. “They make great stuff and have been doing it for plenty of years,” he says. But between exchange rates and shipping costs, Schneider wanted a tray made in Canada. Like many business owners, he built a prototype for himself, and the concept spread like a prairie wildfire. 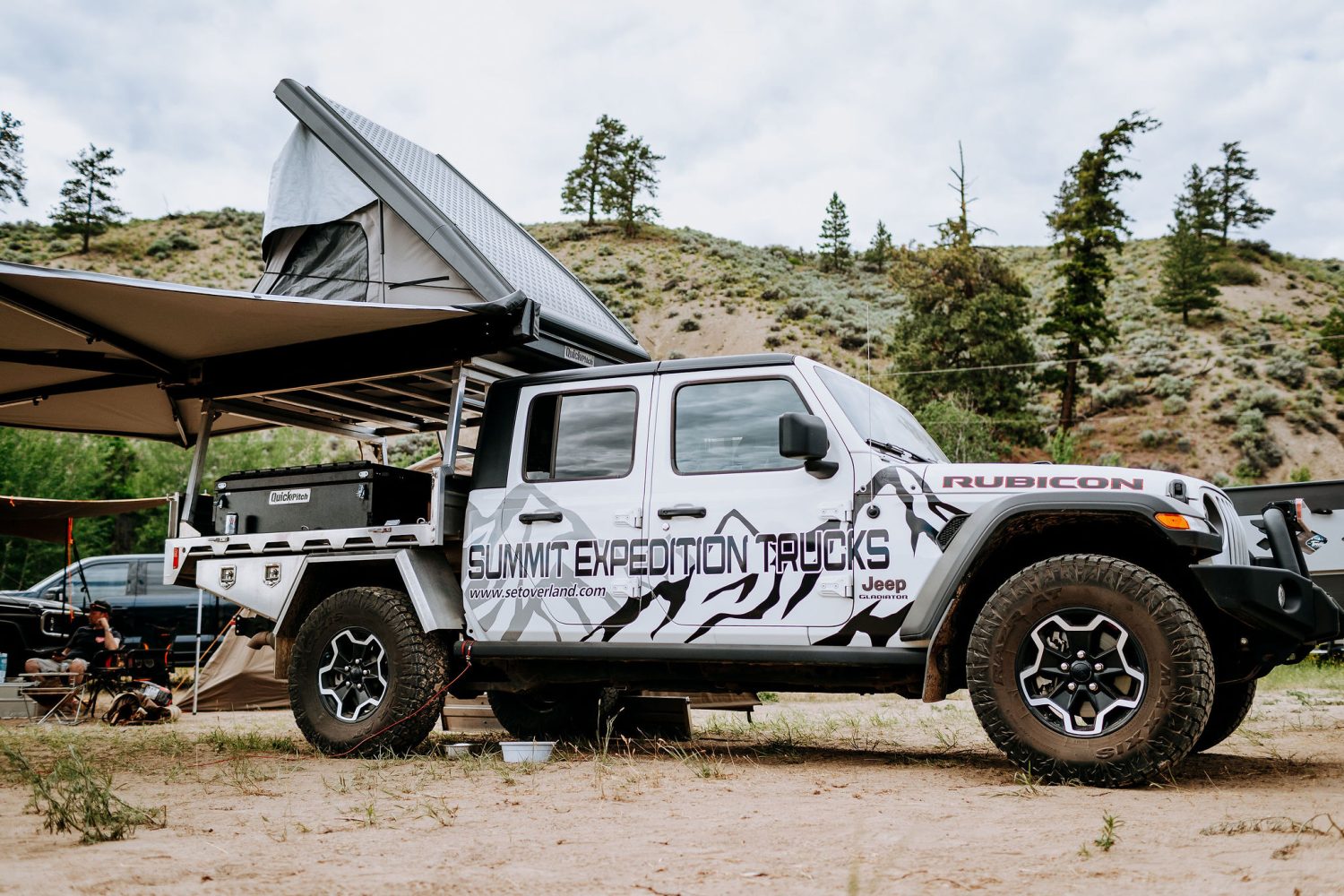 Ralf’s vision was to make the Toyota Tacoma more functional. “With a 6×6 deck, you can now load a quad on the back. The best trip I did was to Edmonton from the shop, so it was only an hour away, but I had the truck loaded up with a ladder rack with lumber on top, and I picked up another table, 20 Culligan water jugs, and had my girlfriend and my dog with me in the cab.” A factory Tacoma box is 19 square feet, whereas the deck expands the space to 36 feet, nearly doubling the usable square footage for all kinds of stuff. “We were putting up fencing around the farm,” Ralf says. “We just threw everything in the back, and it was good to go.” The trays and decks are modular, so customers can choose what they need accessory-wise. Schneider says the entire configuration can be reverted back to the factory box in about a day. The product is cut, bent, and welded in Canada; Summit Expedition does its manufacturing in Saskatoon and installs out of their shop just north of Edmonton. 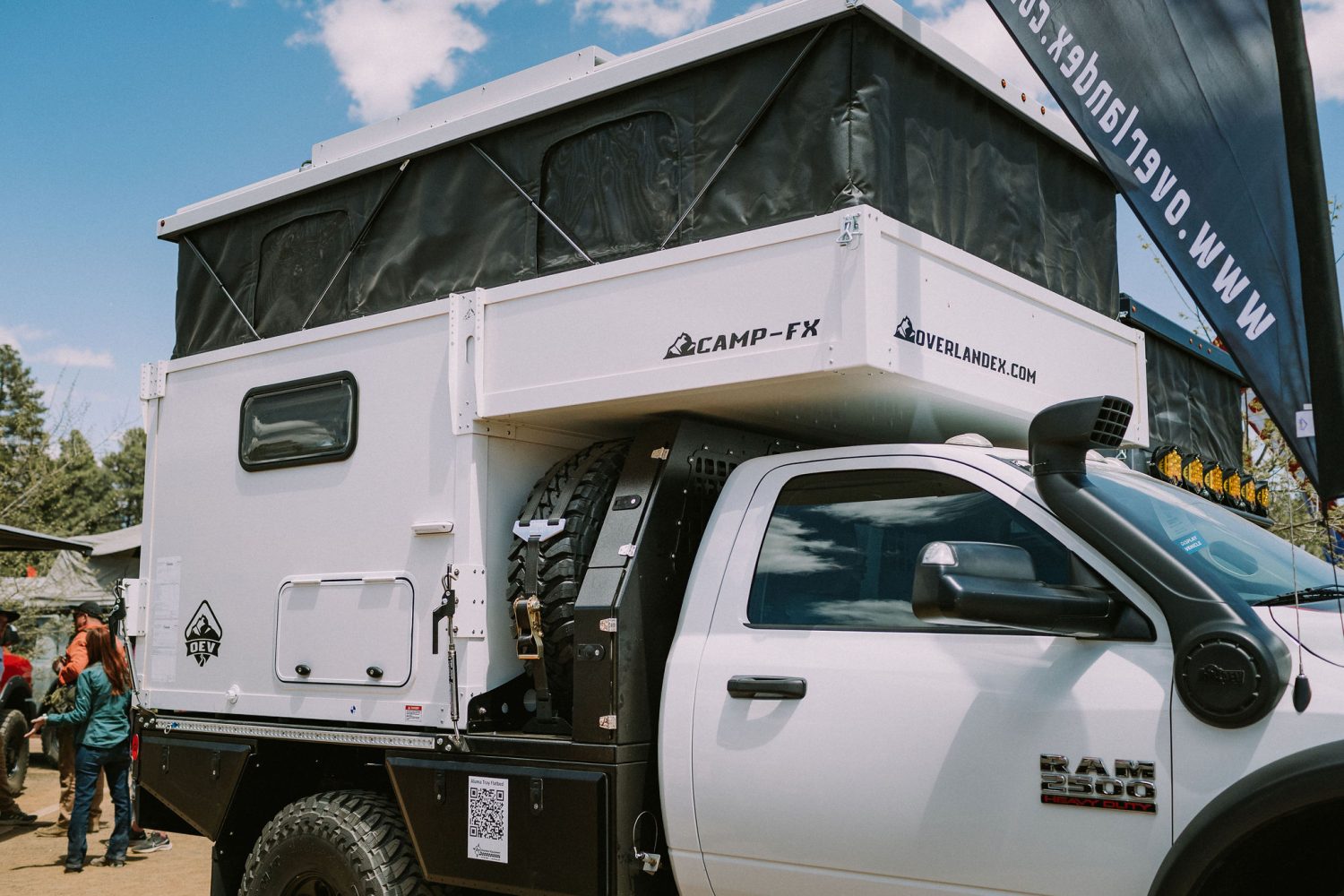 Making the trip from Red Deer, Alberta, Overland Explorer Vehicles (OEV) came prepared with its Basecamp and Camp-FX truck camper models and powder-coated Aluma Tray bed replacements. OEV has a busy rally schedule, so don’t be surprised if you see the team at various locations across North America this summer. I dove into the behind-the-scenes action at OEV’s factory in Red Deer and learned more about the Camp-FX model at this year’s Overland Expo West, so if you’re looking for more information on the company or its offerings, my previous Expedition Portal pieces should answer (most of) your burning questions. 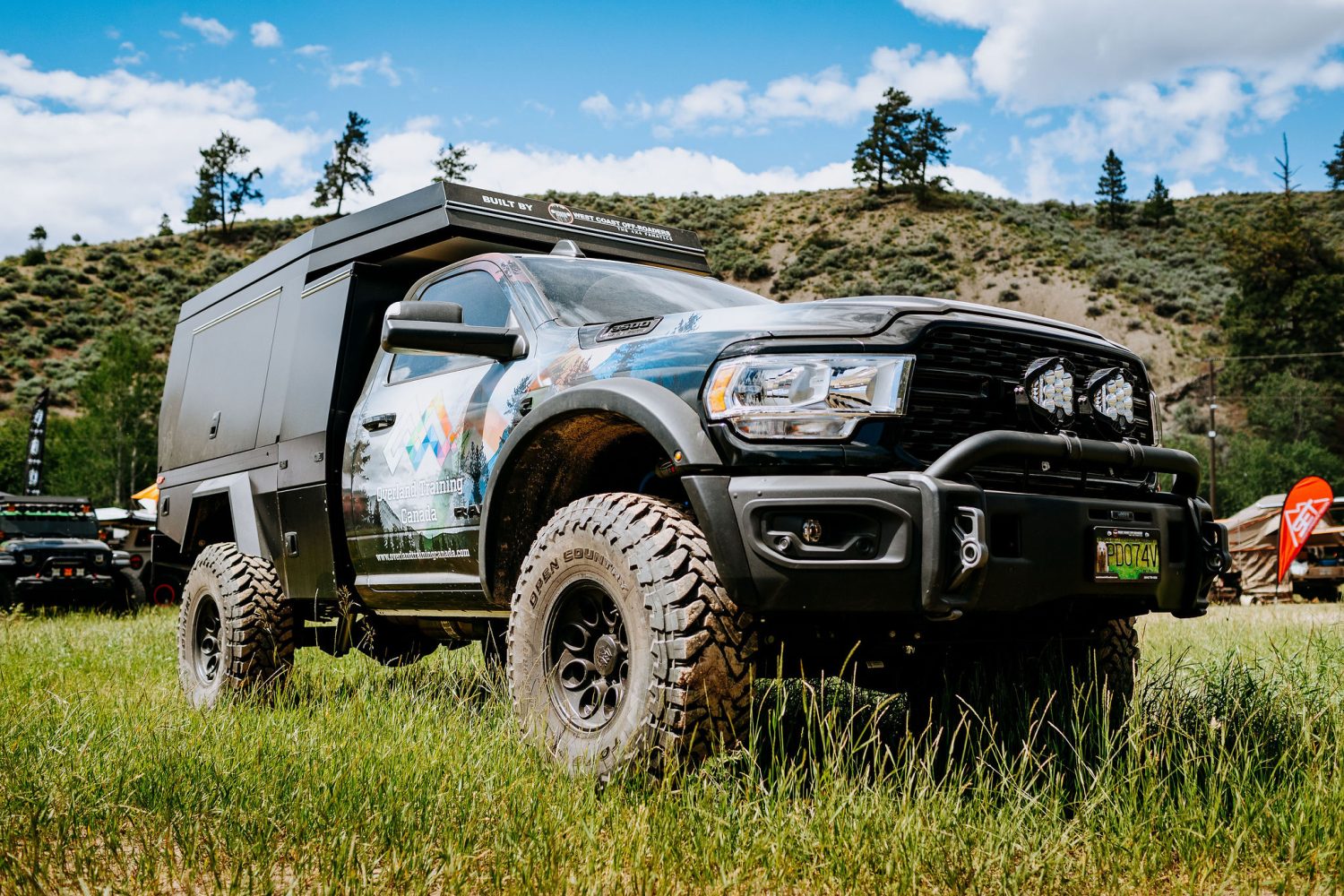 Overland Training Canada specializes in all sorts of off-pavement training, including vehicle recovery, expedition training, Rebelle Rally preparation, press events, and more. Owner Christopher Walker is seemingly omnipresent on the overland rally circuit and has taught everything from snowcat operation at Whistler Blackcomb to driving instruction for the BC Forest Safety Council. Walker led more than a few classes at the BC Overland Rally, such as vehicle spotting and synthetic line repair.

The 4WD Association of BC participates in active backcountry stewardship, including maintaining various recreation sites around the province. As avid off-pavement enthusiasts, they hosted trail rides and off-road and conservation classes during last weekend’s BC Overland Rally.