With various dealers throughout the United States, it may come as a surprise that the heart of Overland Explorer Vehicles (OEV) lies hundreds of kilometers north, in the aspen parkland of Red Deer, Alberta, Canada. The endless camping, hunting, fishing, and recreating opportunities in the region proved instrumental to the company’s formation. “We’re Alberta boys, and we’ve been camping our whole lives,” says Managing Partner Arnold Baker. He and President Mark Cymbaluk formed the business as a division of Lite Industries Inc. back in 2015.

As the story often goes, Arnold and Mark struggled to find rugged recreation vehicles that proved their worth on the punishing off-pavement trails of central Alberta and beyond. Mark grew up on a farm, hunted regularly, and built his own recreational vehicles, including various desert racers, rock-crawling trucks, and an expedition build before the formation of OEV. “Between the two of us, we’ve owned A, B, and C Class motorhomes, tent trailers, hard wall trailers, you name it,” Arnold says. “And everything falls apart. Because where we recreate is not just on a gravel road—we take the gravel road to the trails we’re actually going to.”

Before forming OEV, Mark and Arnold built service vehicles for different utility companies, including large walk-in and rescue bodies, truck decks, and flatbeds on F-550s and Dodge 5500 trucks serving the oil and gas industry in Alberta. “Those customers always wanted everything lighter and stronger,” Arnold explains, “but composites were very expensive in the early 2000s, and it wasn’t cost-effective to build something out of it at that time. While building these service trucks for different utility companies, we realized they were [essentially] campers.” As Alberta’s oil and gas boom fizzled out, Baker and Cymbaluk set their sights on the overland recreational vehicle industry, incorporating what they learned into the design of their pop-up truck campers. 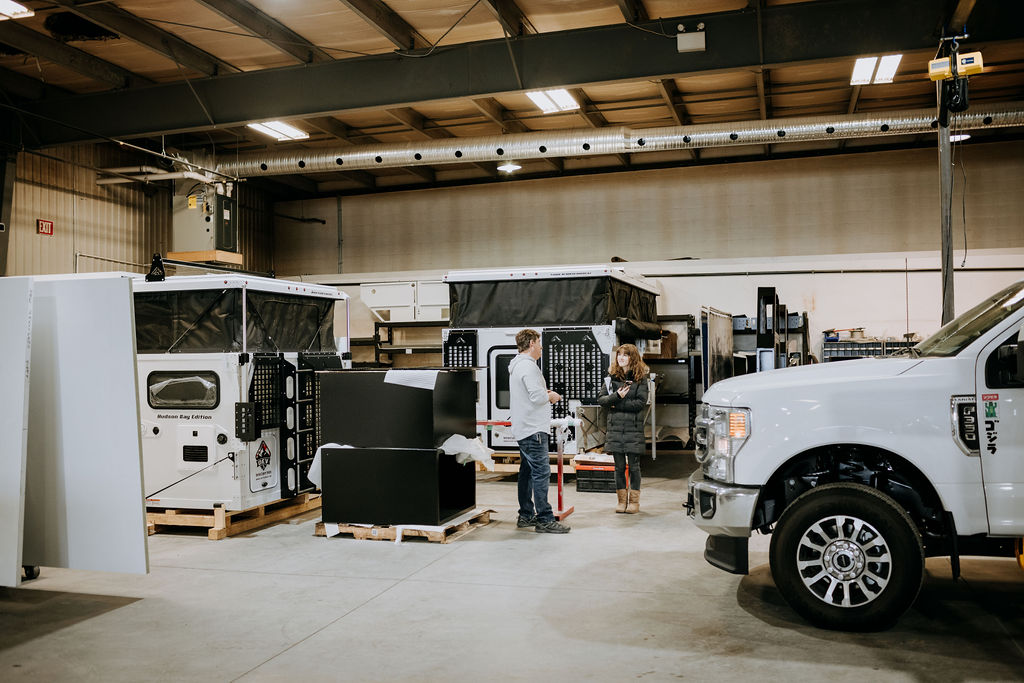 The Camp-M and Camp-X slide-in campers are ideal for mid- and full-size trucks, respectively; OEV estimates their weights at 975 (Camp-M) and 1,345 pounds (Camp-X) dry.

The company also manufactures powder-coated truck bed replacements that bolt to factory mount locations and are designed to replace 6.5- and 8-foot beds. The weights of these Aluma Trays are estimated at 700 pounds for the 6.5-foot model and 800 pounds for the 8-foot model. OEV recently announced the addition of a heavy-duty Aluma Tray with specifications to follow. 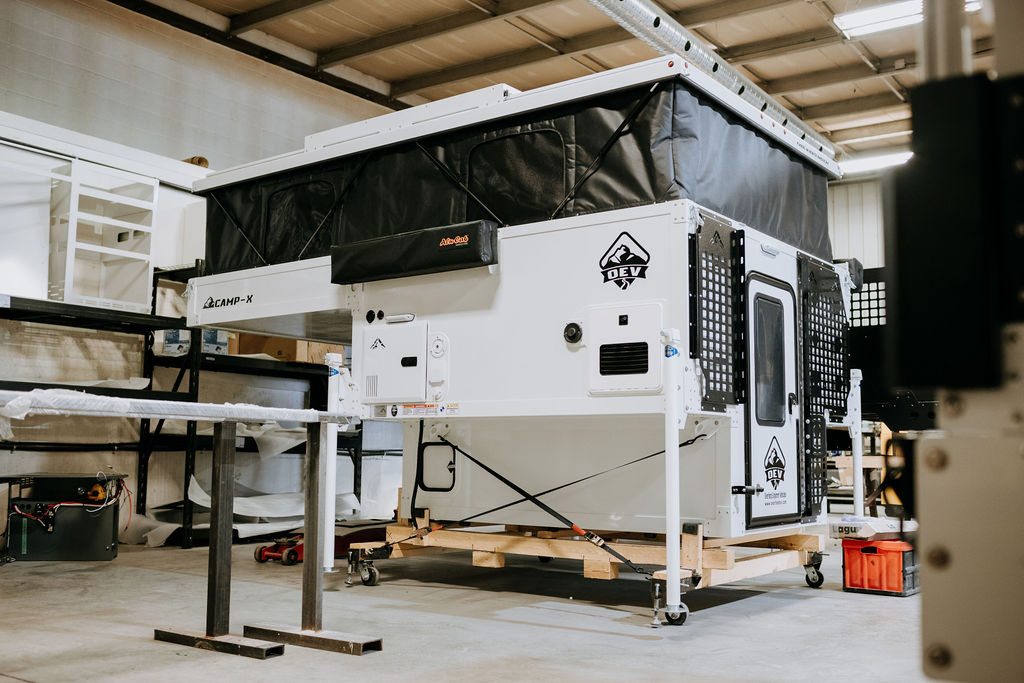 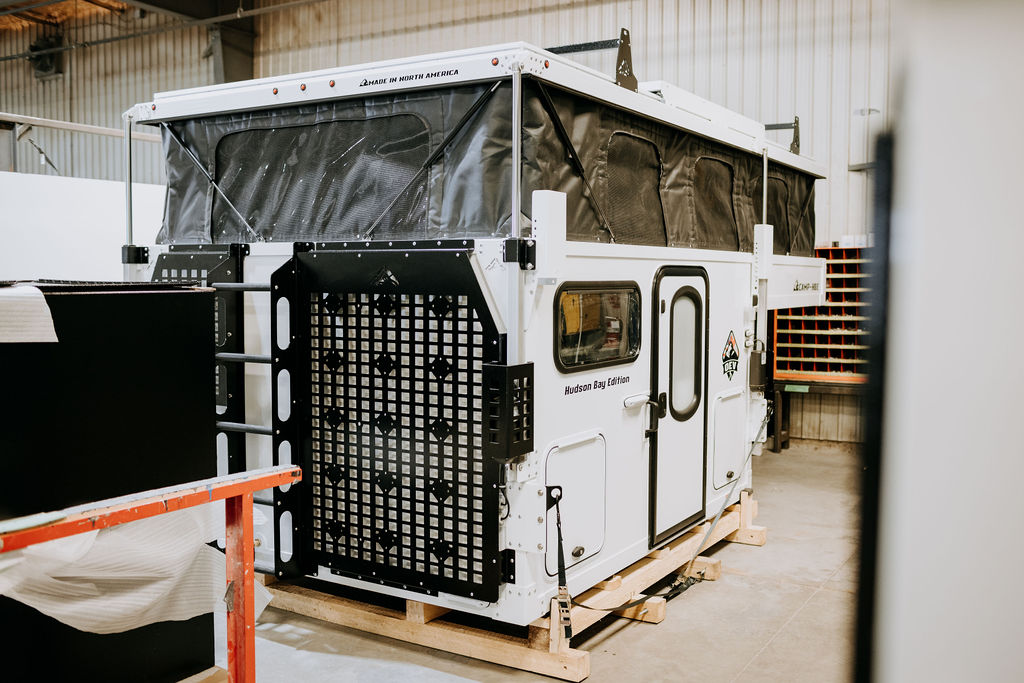 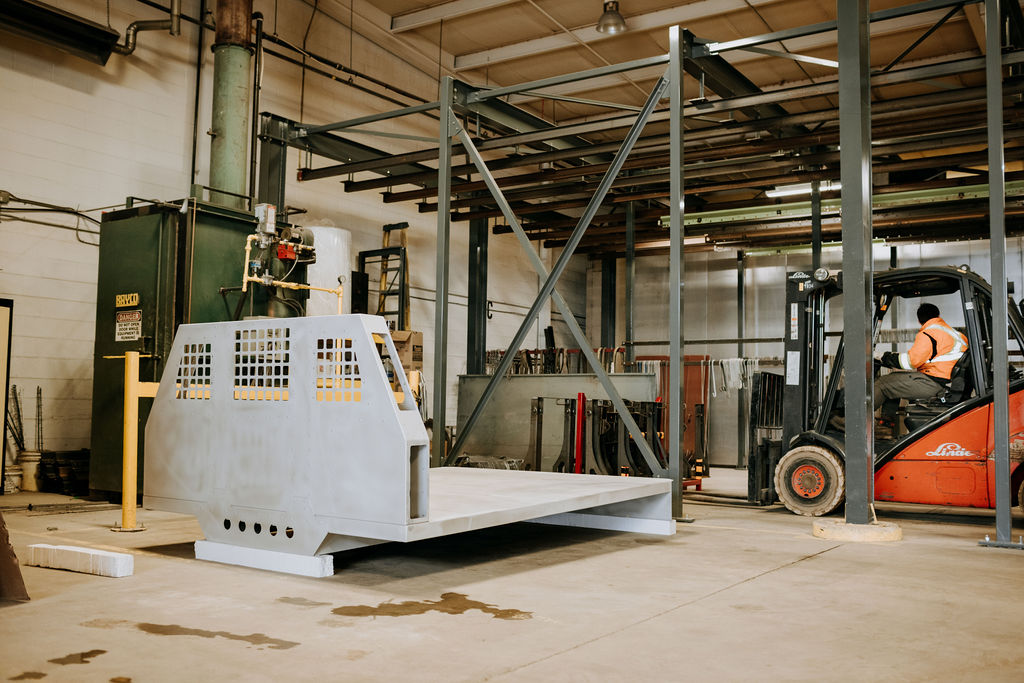 OEV campers are designed with a purpose. When Mark and Arnold first delved into truck camper production, they spent the first eight months solely testing adhesives. After that, they assessed polypropylene panels. The floors, Arnold explains, require something more structural than thermal, so they chose 1.5-inch polypropylene with a gel-coated surface on both sides. Wall panels are also gel-coated, but the interior is made of honeycomb polypropylene and a central core of foam made from recycled water bottles. It was crucial to Baker and Cymbaluk that they chose foam adverse to cellular degradation. “If you run your finger across the foam, the first couple of cellular layers don’t break down,” Arnold says. “This prevents failure over time, especially with off-road use—twisting, constant motion, pulling, and coming together.” Locally extruded aluminum makes up the frame of the campers, and for every inch of aluminum, there lie 9 square inches bonded with adhesives. “This means it will take around 4,650 pounds of force per inch to compromise the bond,” Baker tells me.

The manual-lift roof panels have an FRP skin on either side and an XPS foam core. “These were selected because we needed a thermal value, and [they] needed to be extremely lightweight because it’s a manual lift,” Arnold says. The insulated soft walls are composed of a four-piece assembly with a UV-resistant marine nylon exterior. This construction eliminates as much stitching on the outside sheath as possible so the inside and outside coated fabrics can breathe during all three seasons. 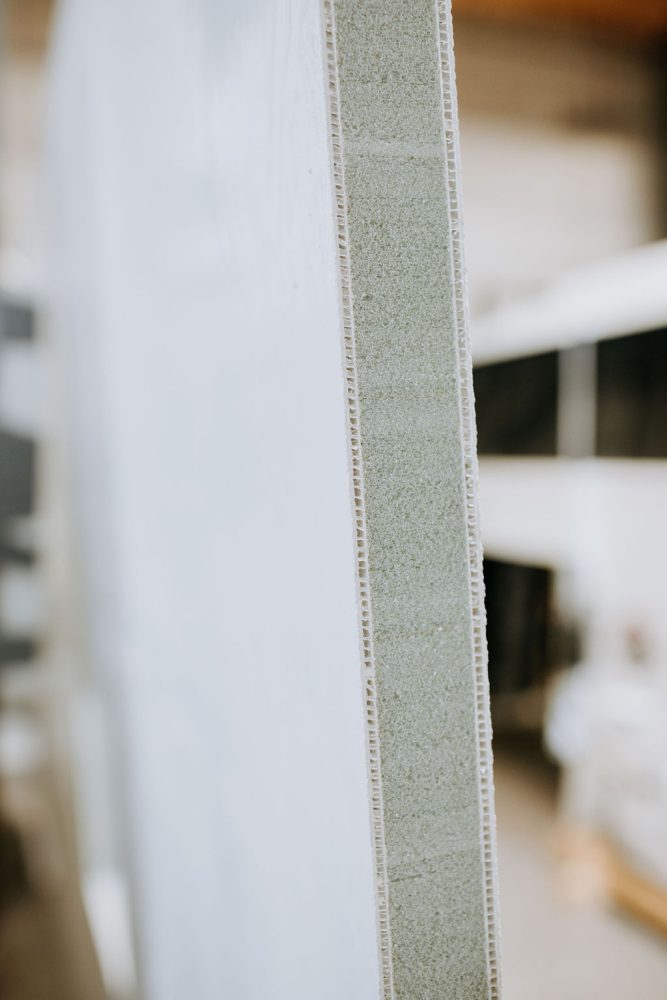 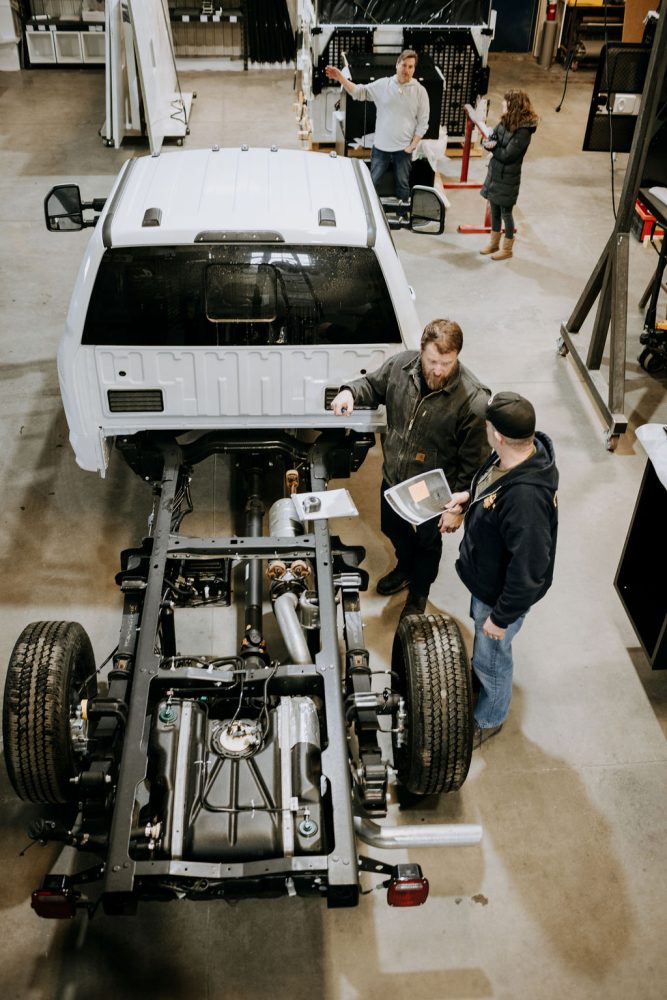 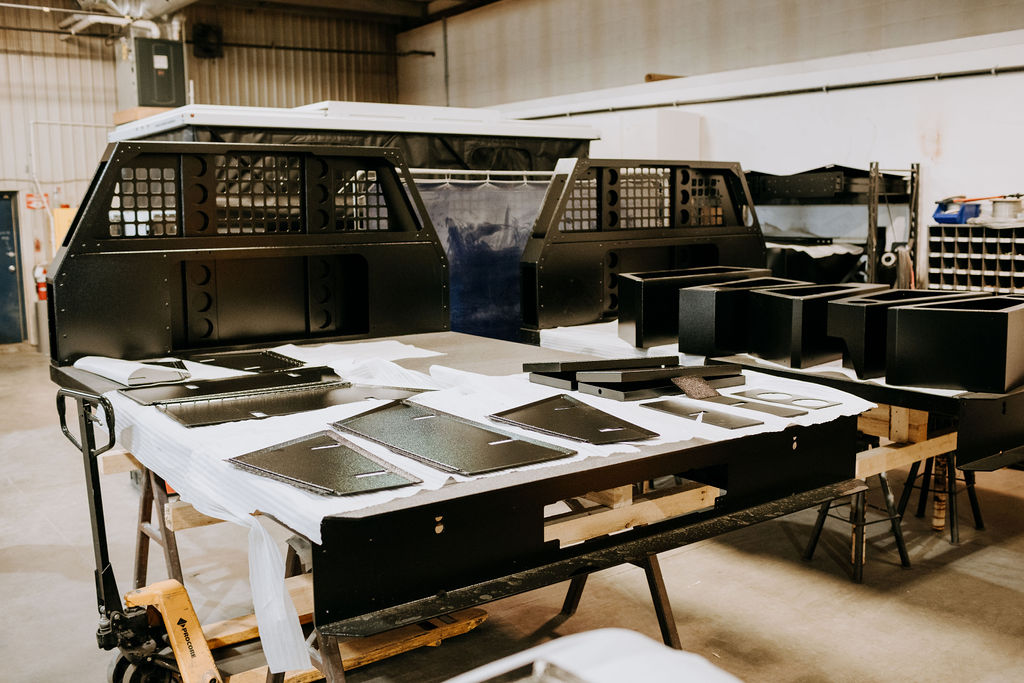 Each OEV product starts with panels, which Arnold notes they do not build in-house but have aligned with a paneling manufacturer specialist that also works with the US military. Once received at the OEV headquarters, windows and doors are cut into the panels by a CNC router table. Panels then move to the glue-up cell, where the camper bodies are bonded together.

Pre-assembled aluminum furniture (the construction of which is outsourced due to limited warehouse square footage) receives an in-house powder coat and is placed into the camper body before finalizing the plumbing and wiring systems. Each unit is tested extensively, Arnold explains, ensuring proper function of the electrical, plumbing, and propane units. Finally, the camper moves to shipping, where it undergoes a final quality control test before being loaded onto a transport truck.

“If there’s one thing we’re guilty of, it’s evolving,” Arnold says. “We’re improving our product and re-inventing things all the time. Our employees bring different skill sets, and everybody has a different background. A number of different voices come together, trying to come up with a better mousetrap all the time.” The collective isn’t solely from an internal perspective but includes OEV’s dealers and customers as well. A joint venture with Mario Donovan from AT Overland is one example. “Mario was building the Aterra camper, but he selected our tray to go under every Aterra. We built and designed the tray with a lot of his feedback, and our new Aluma Tray HD evolved from that.”

More than once, I’ve heard Overland Explorer Vehicles campers described as “over-engineered,” and it’s easy to understand why. Although I haven’t spent days or weeks living out of a Camp-X or HBE, my initial impression is that they’ve been built to last. I examined and touched the pop-up sidewall fabric, tried out the manual lifting mechanism, and was impressed by their robustness and ease of use. The engineering, strategy, design, and choice of materials make sense. Plus, Baker and Cymbaluk aren’t afraid to make changes, as evidenced by the inclusion of additional storage space and bamboo countertops in their 2022 models. It will be exciting to watch the progression of this company in the coming years. And for you hard-sided camper fans, the newly redesigned four-season Summit Series will be introduced in 2023. 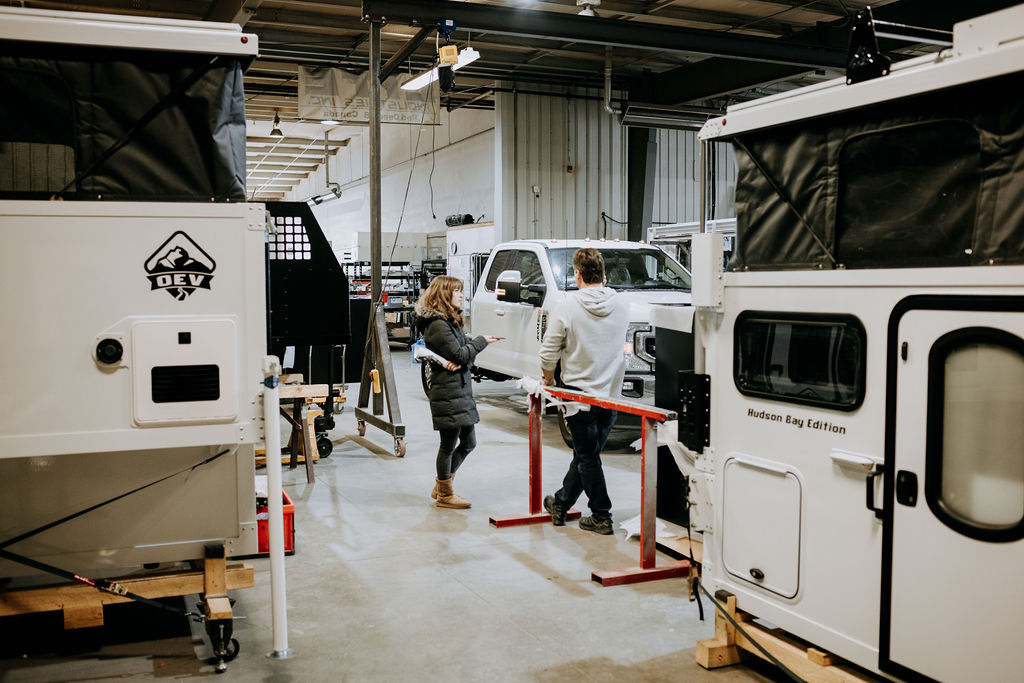 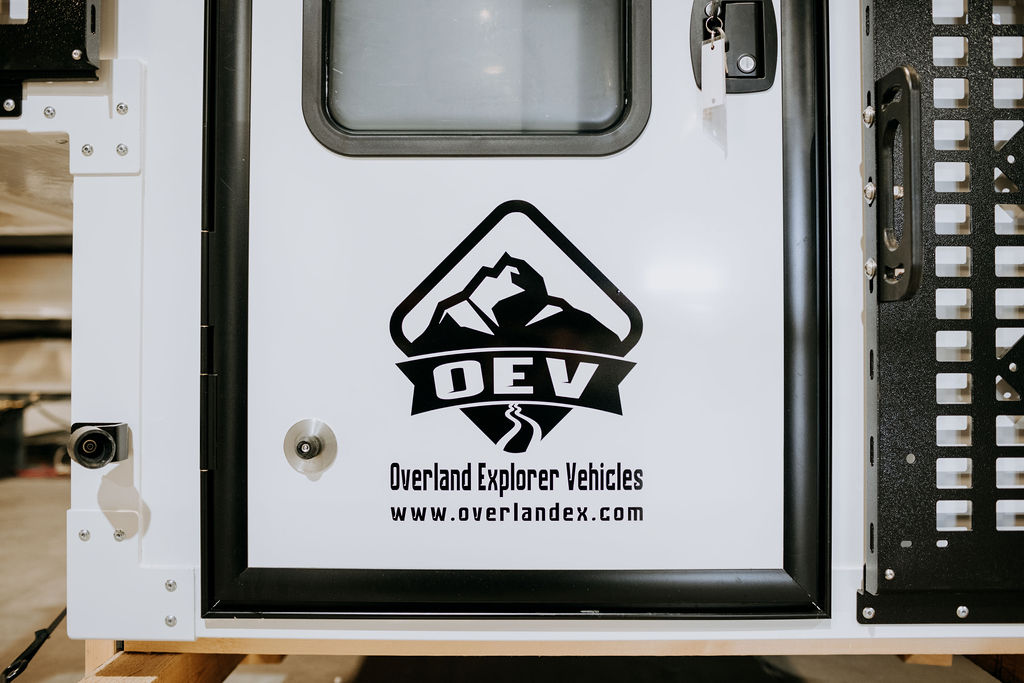 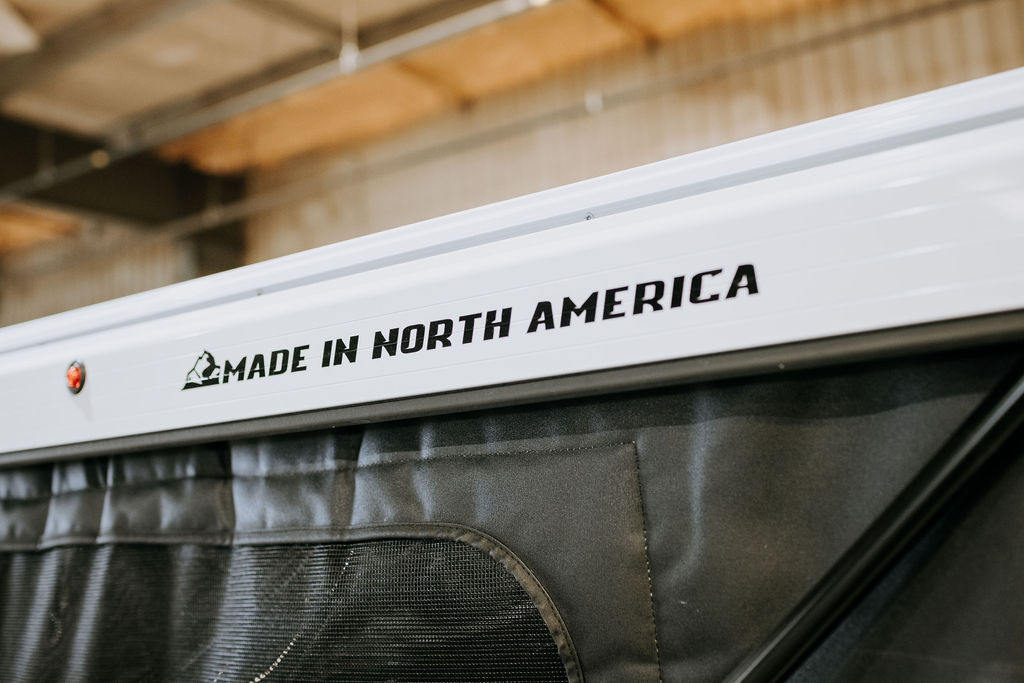