For years I’ve been going on adventures where someone else other than myself has provided the route that the group will be using. Rarely have I ever been the one to plan a route as it’s not been a strength of mine and I was happy to pass on that responsibility.

When it comes to adventures, we all have a unique role to play to get everyone home safe, entertain along the way, or bring an asset to the group. For me, I always bring my photography skills to the table. It’s something I’m passionate about, and it’s a way to share those captured moments with friends on the trip, their loved ones, friends, and the content-hungry social channels. I’ve learned to lean into that as a strength that I can provide to others. 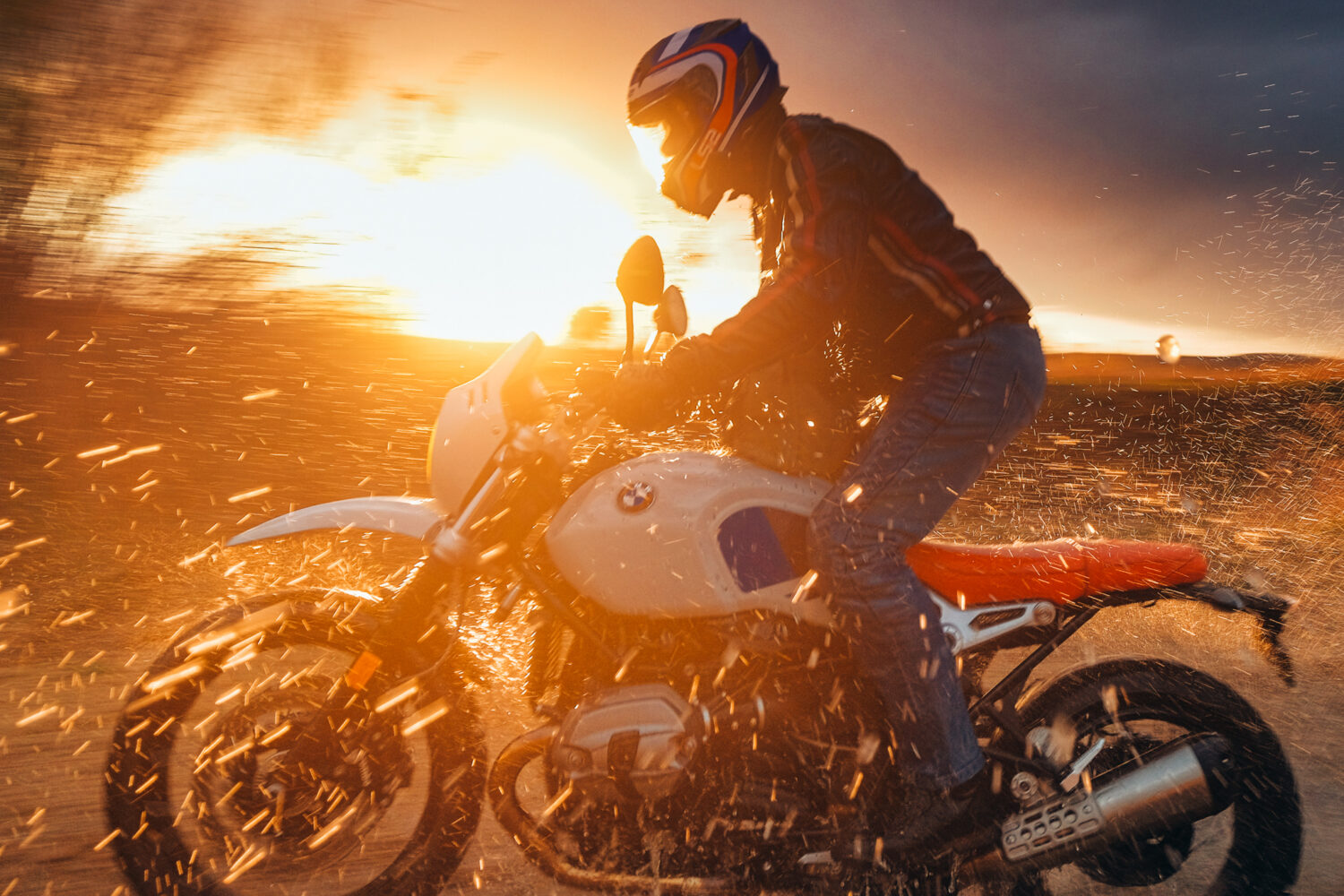 Anytime there’s a water crossing along a route, it’s a bonus.

As to my weaknesses, I often completely walk away from attempting other skills that I know others can do better than me. For example, if a bike breaks down on the trip, I grab my camera to document. I don’t even think of going looking for tools or walking toward the situation to offer advice on fixing the problem because I know that there’s someone else in the group who knows what they’re doing. Call it ignorance, or maybe not wanting to waste time on things I’m not good at. However, I decided that creating routes and overall navigation of trips was a skill I had avoided for too long. 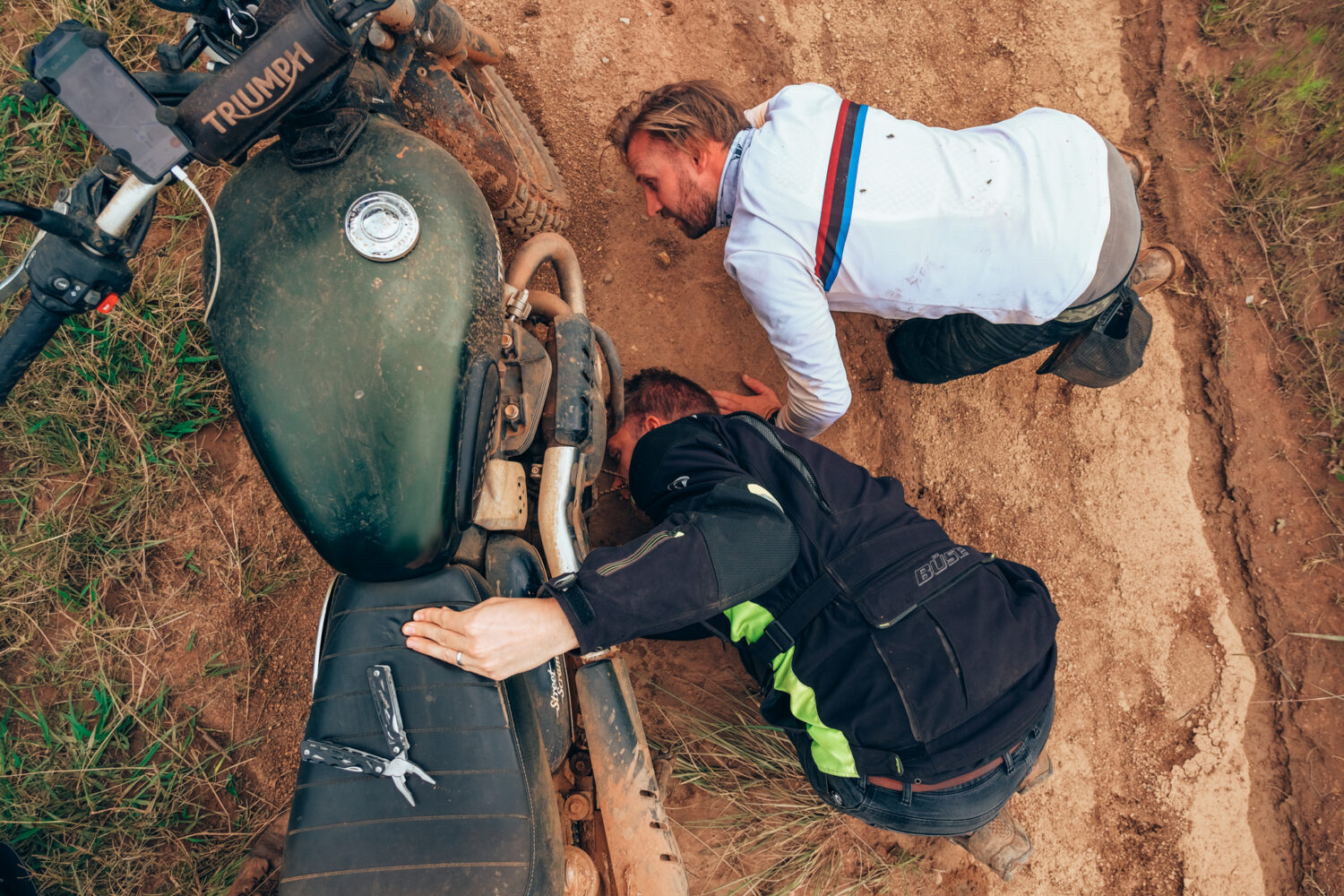 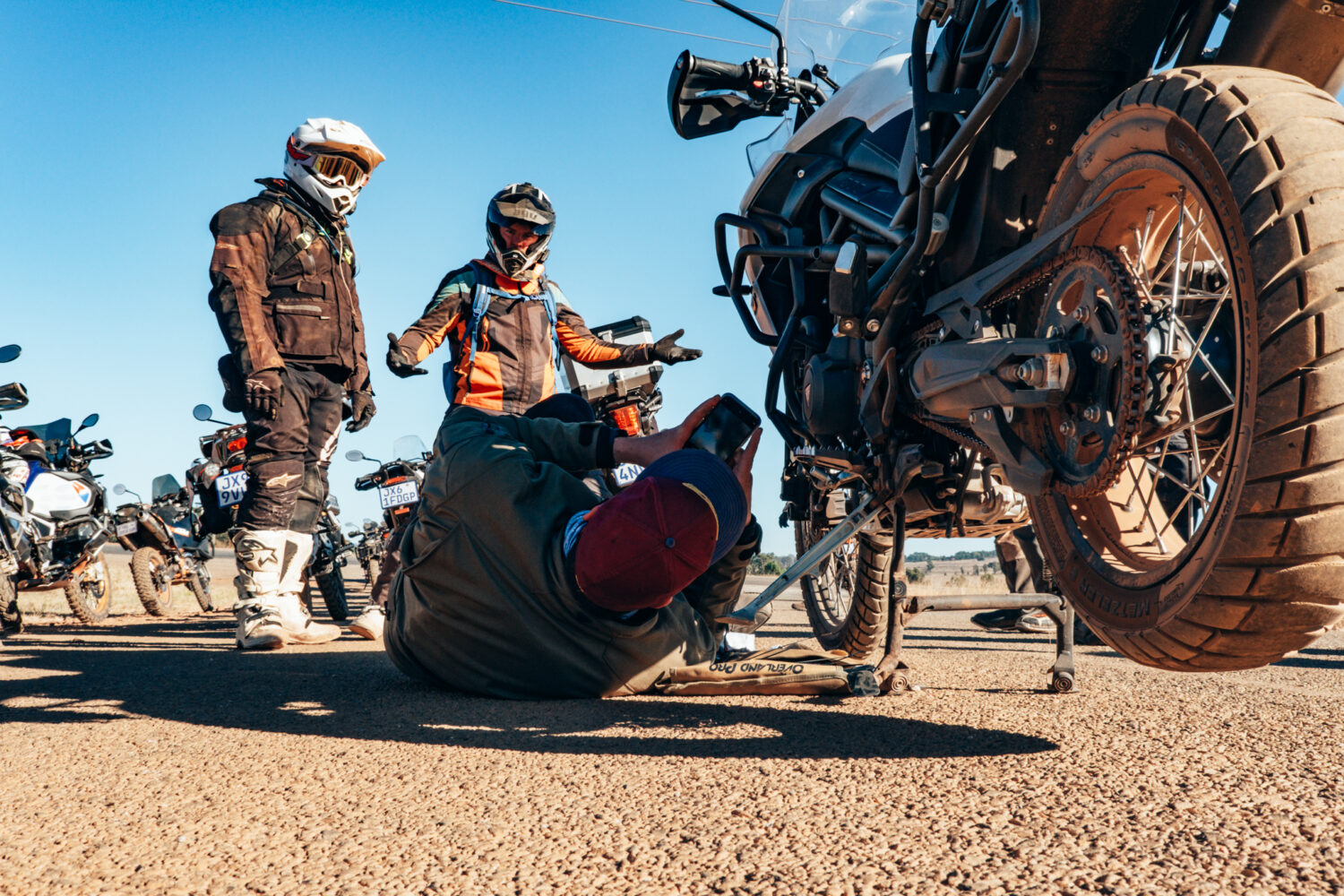 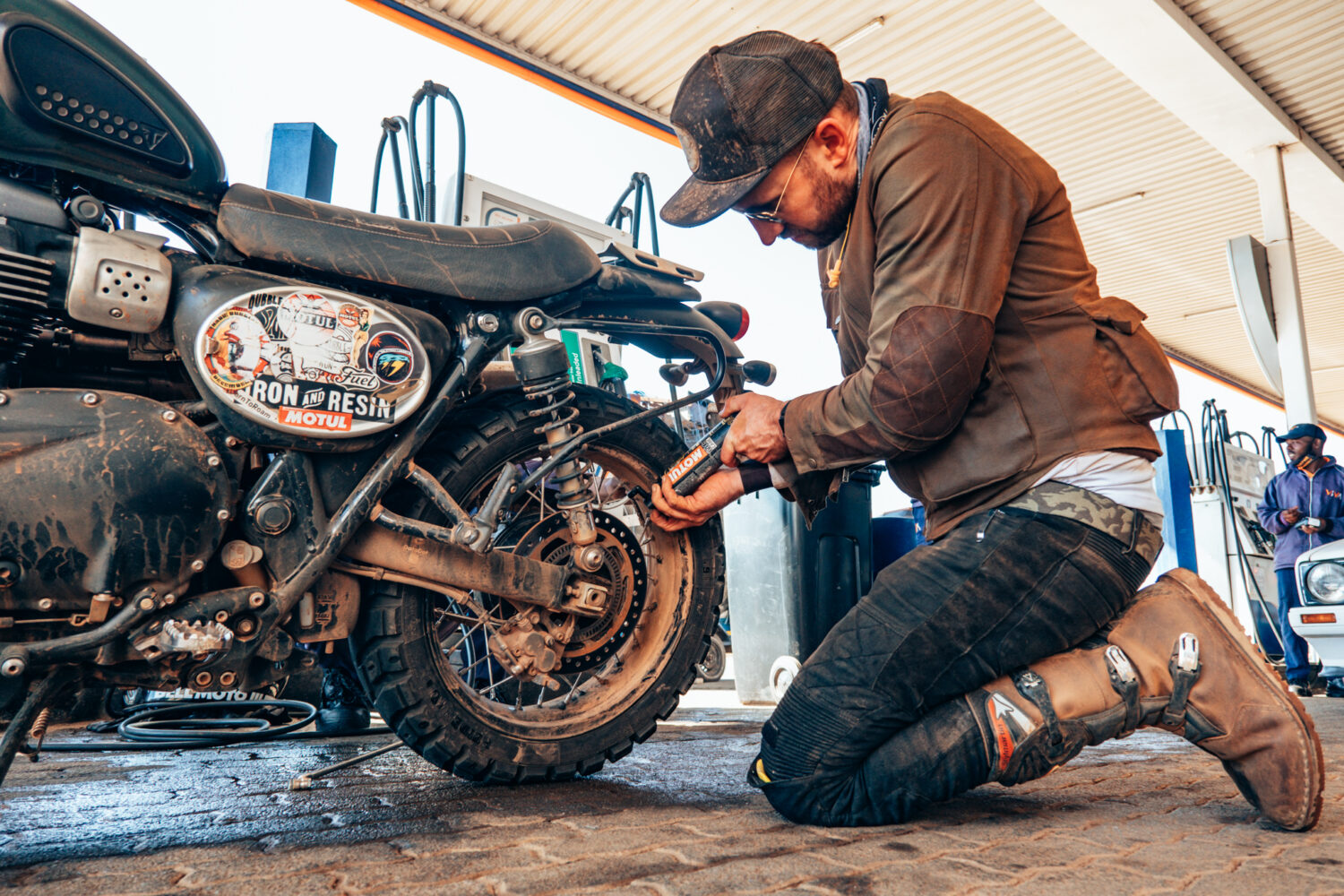 My can of tyre sealant came in handy for Alan. Even with a tube, it eventually held and allowed him to get back home safely saving him hours of time.

During my days in the military, I learned how to navigate via a compass and a map, so I’m not completely ignorant to navigation. I’d be able to get home if dropped in the woods. It’s not something I’ve relied on, though. 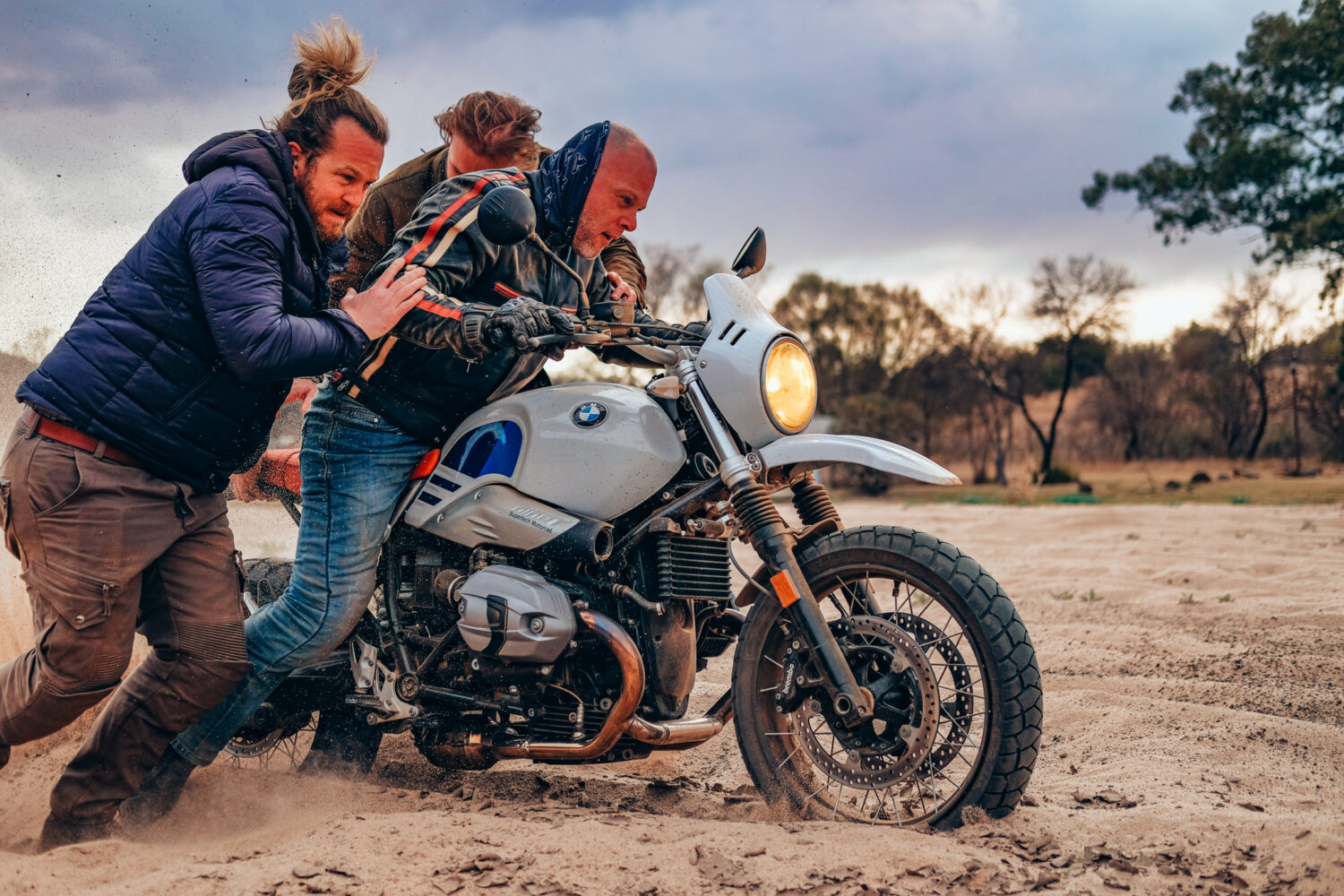 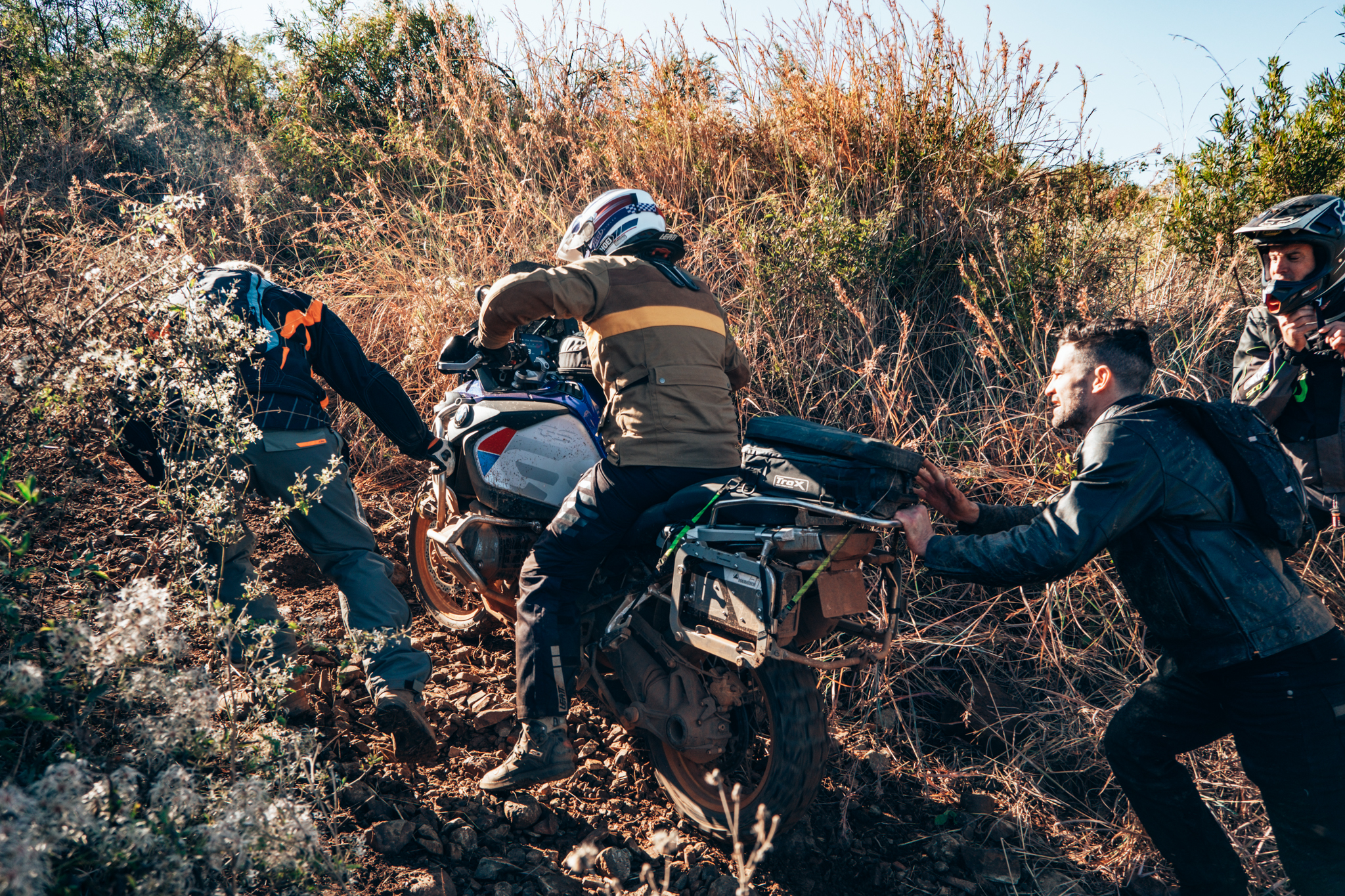 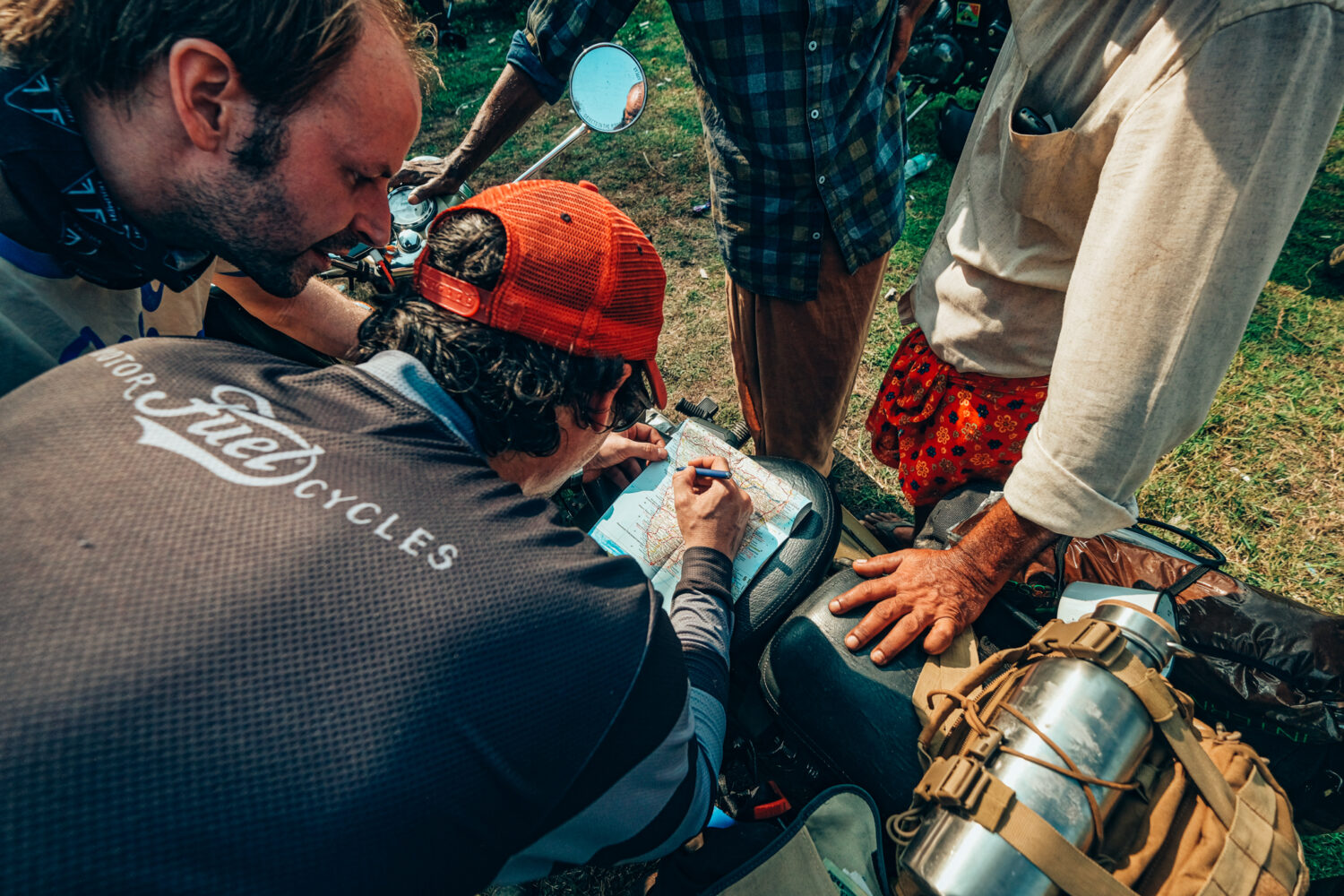 Before leaving the coast in Thikkodi we get advice from locals to see if there’s any way around the crazy highway.

Maybe my avoidance of navigating came from watching my dad try to navigate our family in the station wagon holding his map and getting us lost all the time. Looking back on it, how bad was it? Were we really that lost? Possibly, but we were fine, and we were together. Did anything go wrong besides being extremely hungry? No. I think the anxiety I felt in those days eventually led me to not wanting to take control of creating a route for others in fear of getting them lost or making a wrong turn. 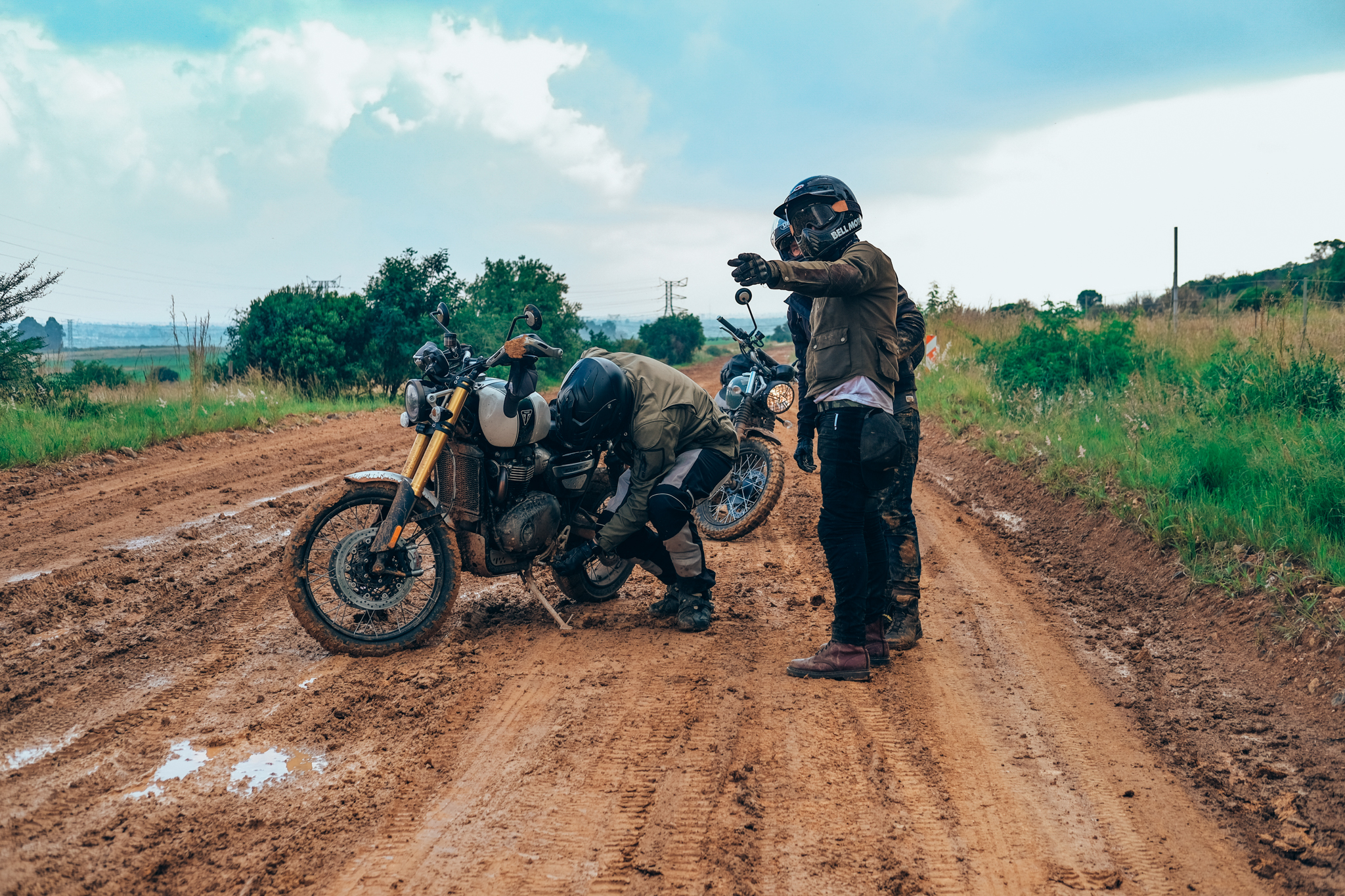 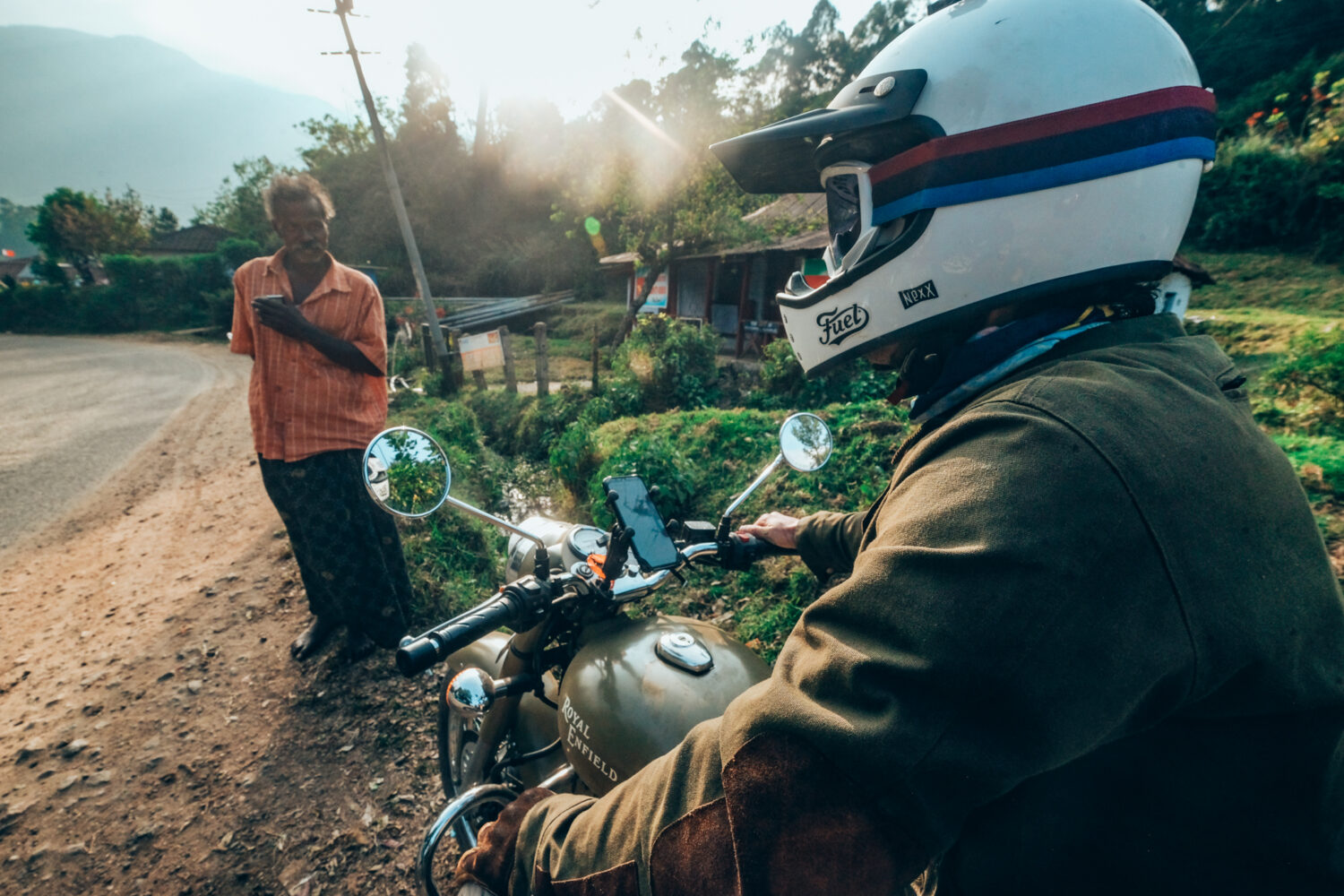 Such as everything in life, sometimes you need to lean into a weakness, go for it, and hope for the best. So in early 2021, I made a promise to myself that I would start playing a more active role of finding and creating routes for adventures, satiating my curiosity, and exploring where I live in South Africa. I admired those around me that would come up with a route and confidently say, “This is where we are going, and here is the route we’ll take.” How did they do that? What if it wasn’t a great route?

I find that a route can relay someone’s creativity, their willingness to take chances, and allows them to show others what they enjoy and look for on a trip. Not everyone wants to do a river crossing or traverse a mountain, but I sure as hell can respect that person a lot more for wanting to attempt it. 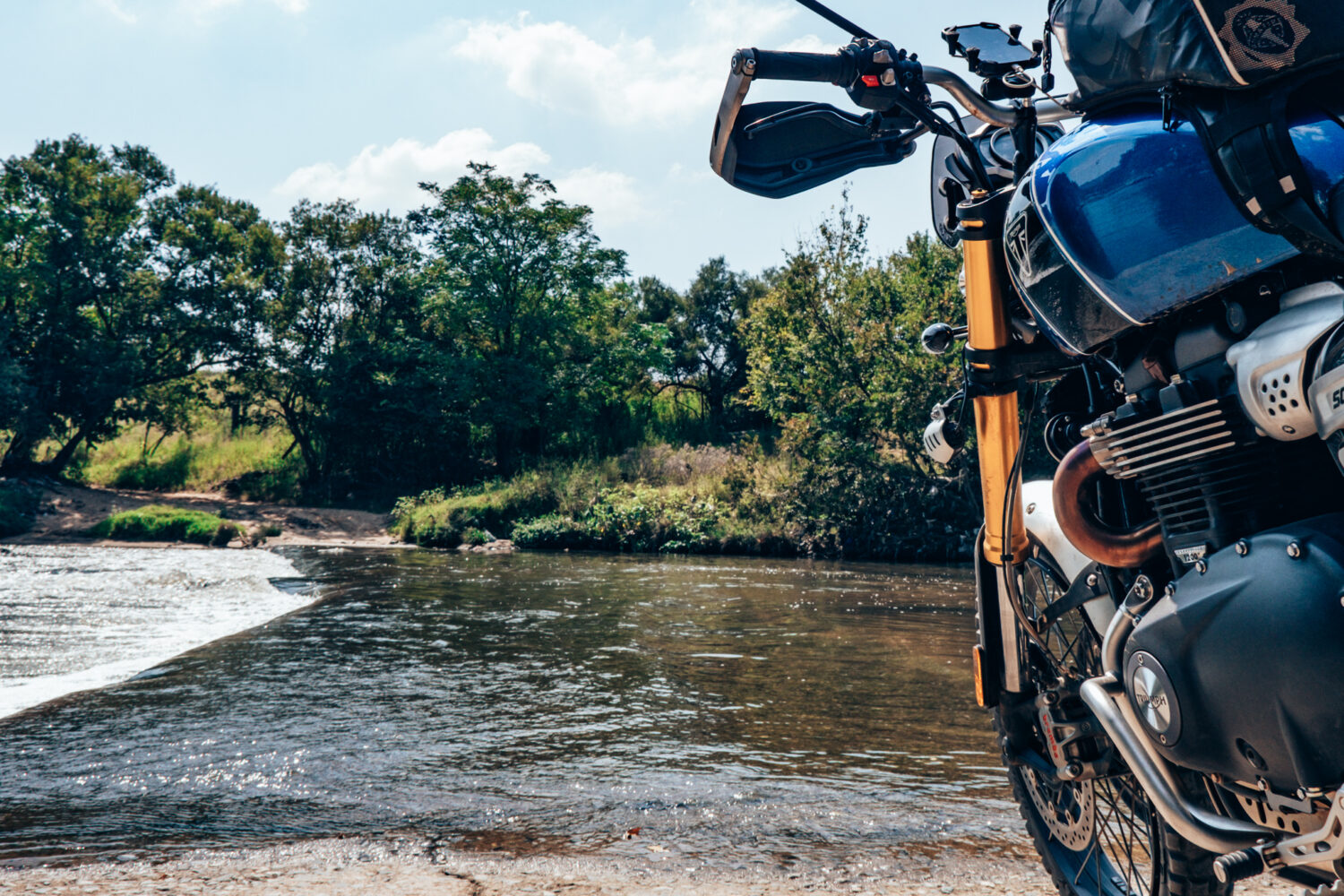 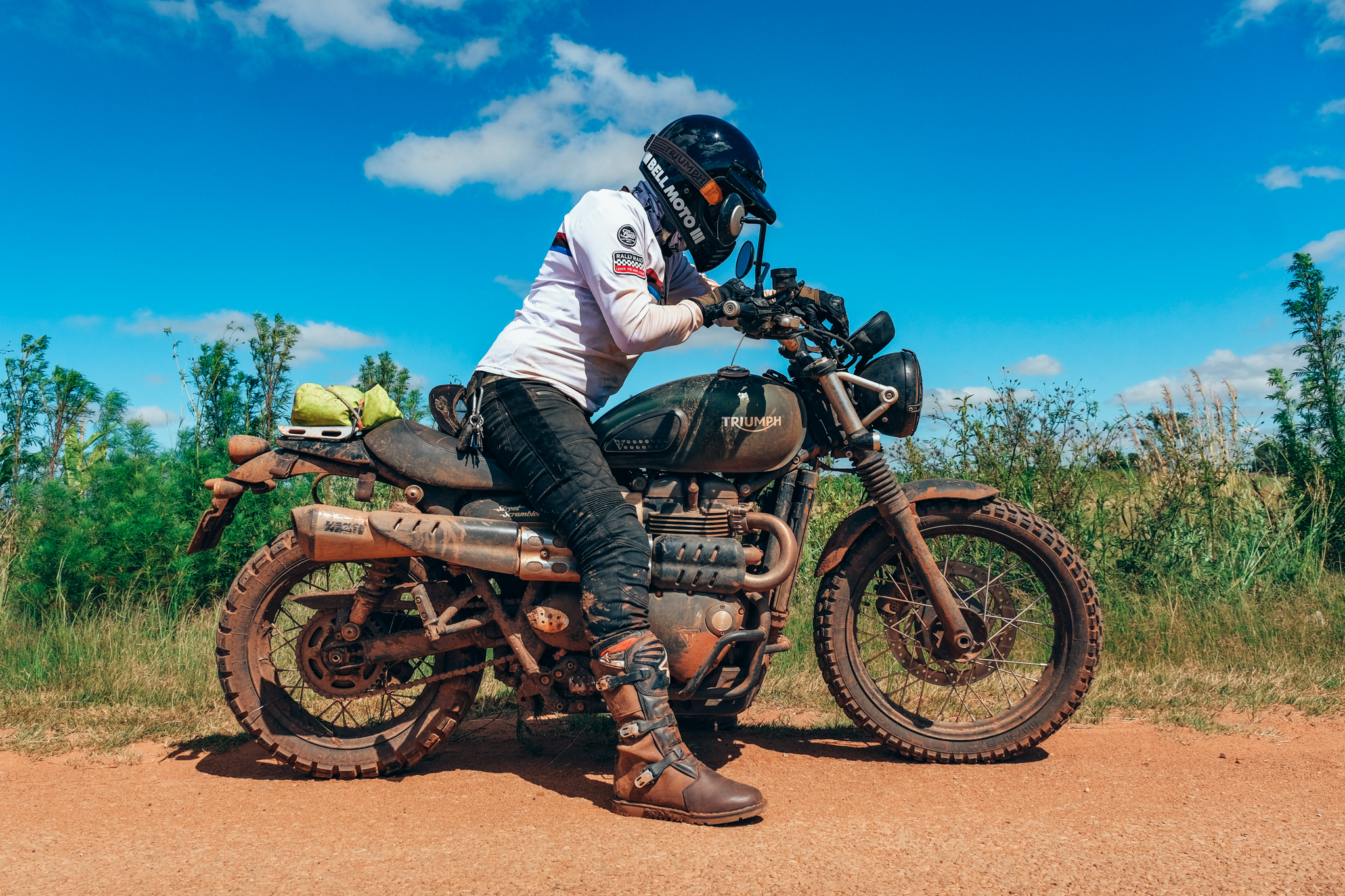 Whenever I’m driving, I’m always looking off into the distance at dirt roads and wondering where they go. I think it was right around the time I became the brand ambassador for Triumph Motorcycles here in South Africa that I also downloaded and purchased a subscription for Gaia GPS (no affiliation to me). I now had a 1200 Scrambler at my disposal, and I wanted to make sure that I took full advantage of the time with the bike to explore. 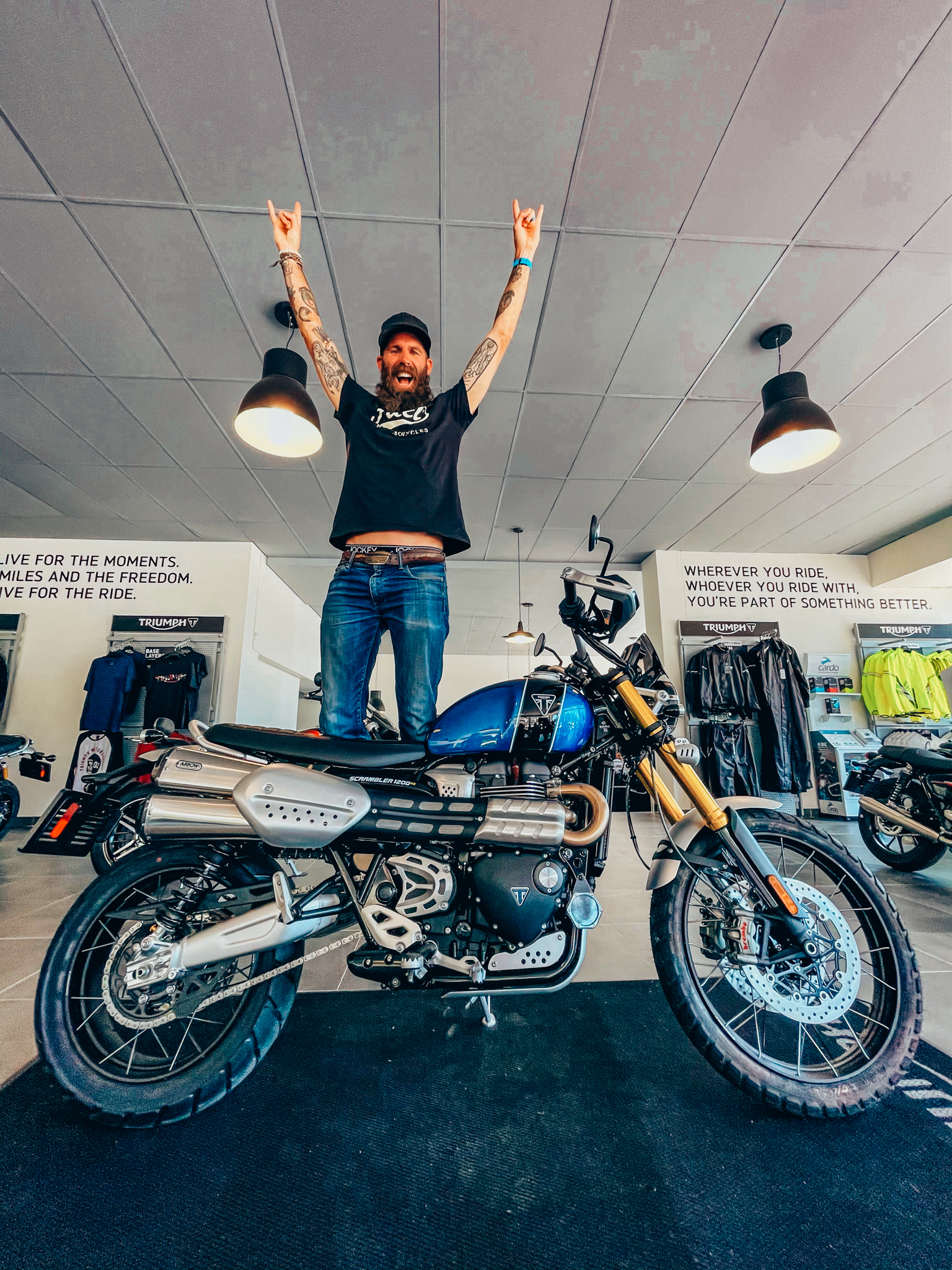 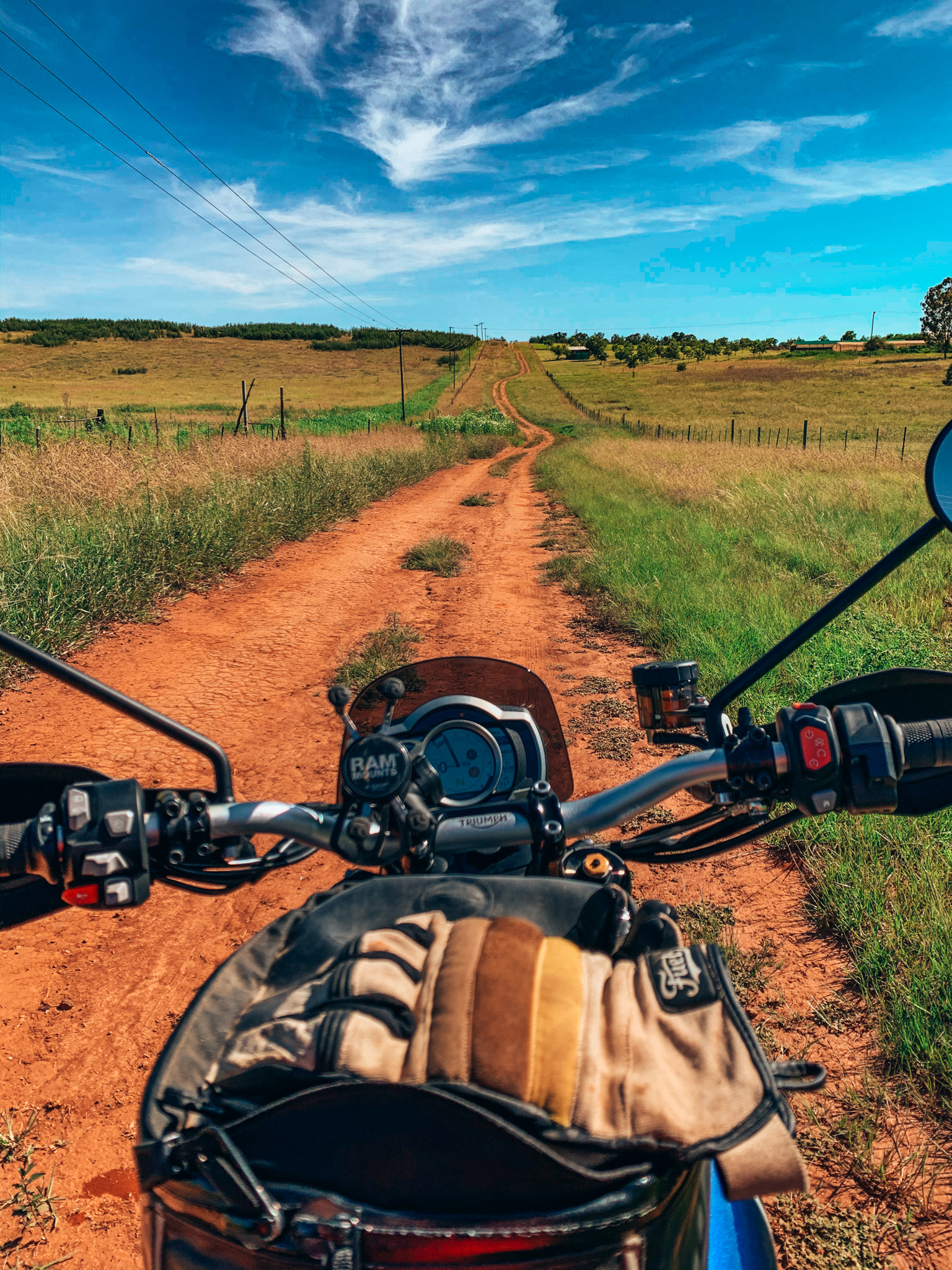 Over the years, I’ve used all types of navigation applications, and they always seemed so cumbersome. I was also looking for something that I could store previous trips on, save other people’s routes for possible exploration, and also have something to look at for inspiration for upcoming trips. After numerous searches, Gaia seemed to be the right one for me. It comes with its challenges and limitations for sure, but I’ve enjoyed Gaia’s capacity to store items and sync them between my devices. 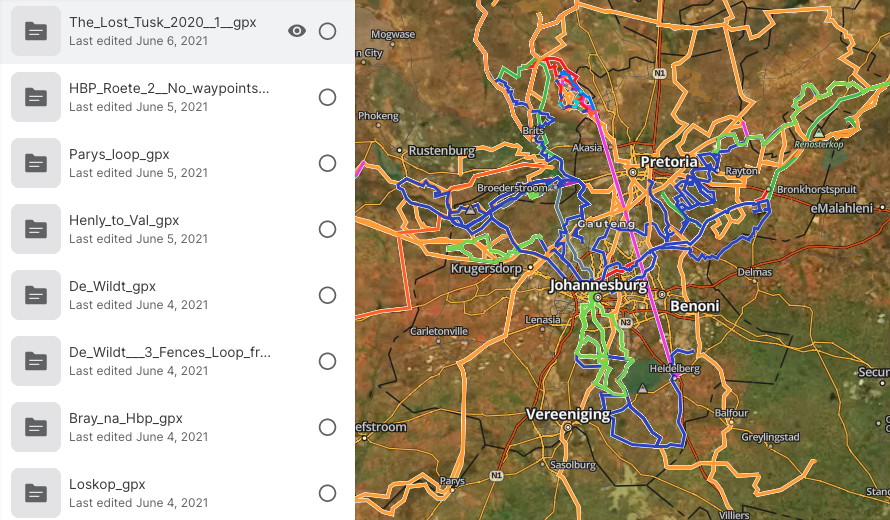 A screen shot of my folders and the routes I’ve built up around Gauteng.

It didn’t take me long to start searching forums for other public routes, chatting to friends about their routes, testing them out, and modifying them to my liking.

Here in South Africa, it’s said that there are over 400,000 kilometers of public dirt roads out there and close to 700,000 kilometers of unmarked and public dirt roads. Needless to say, there are a lot of fascinating places to travel off the beaten path here, and I’m going to do my best to explore as many of them as possible. That’s where all the fun is anyway, right? 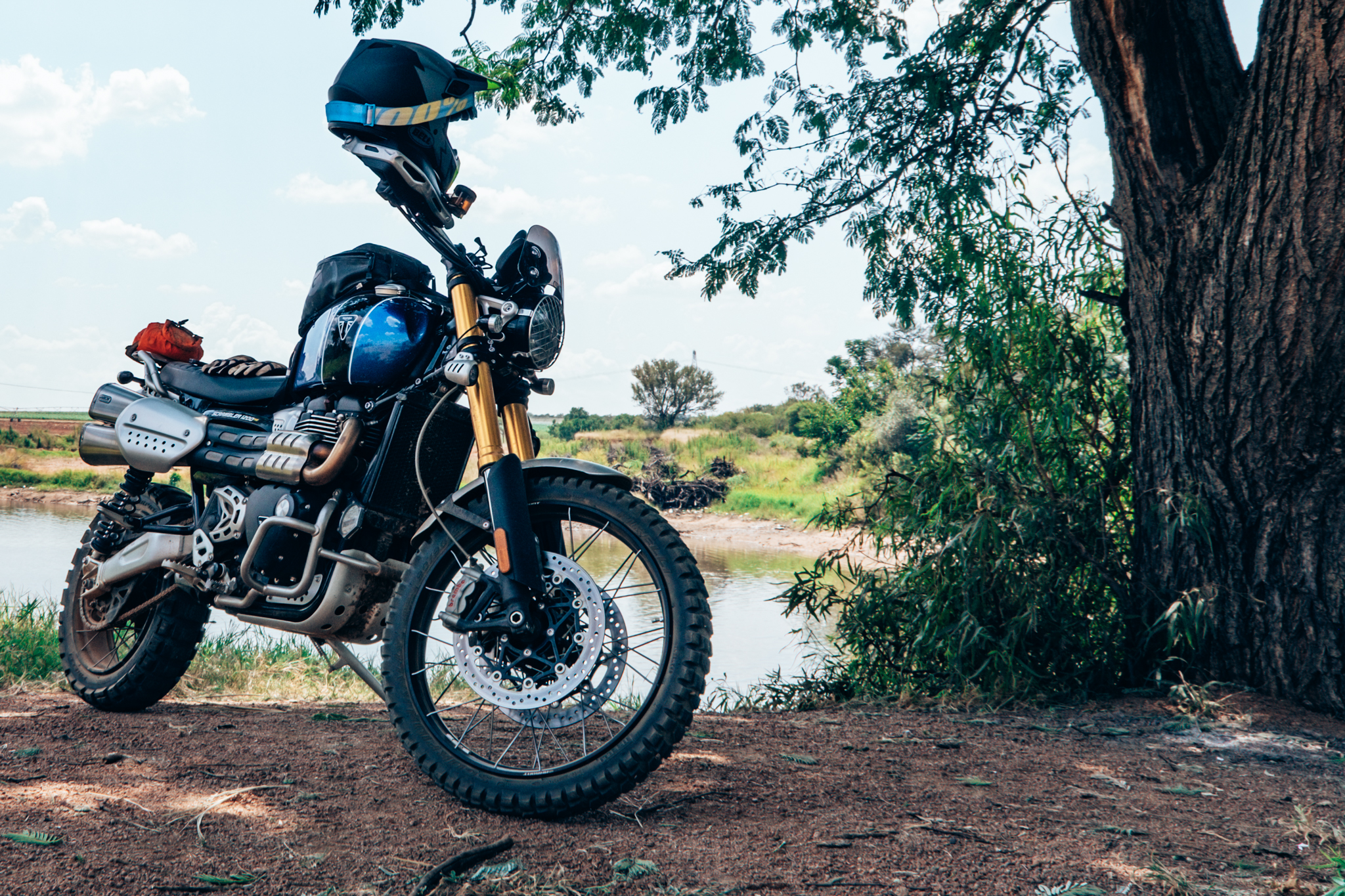 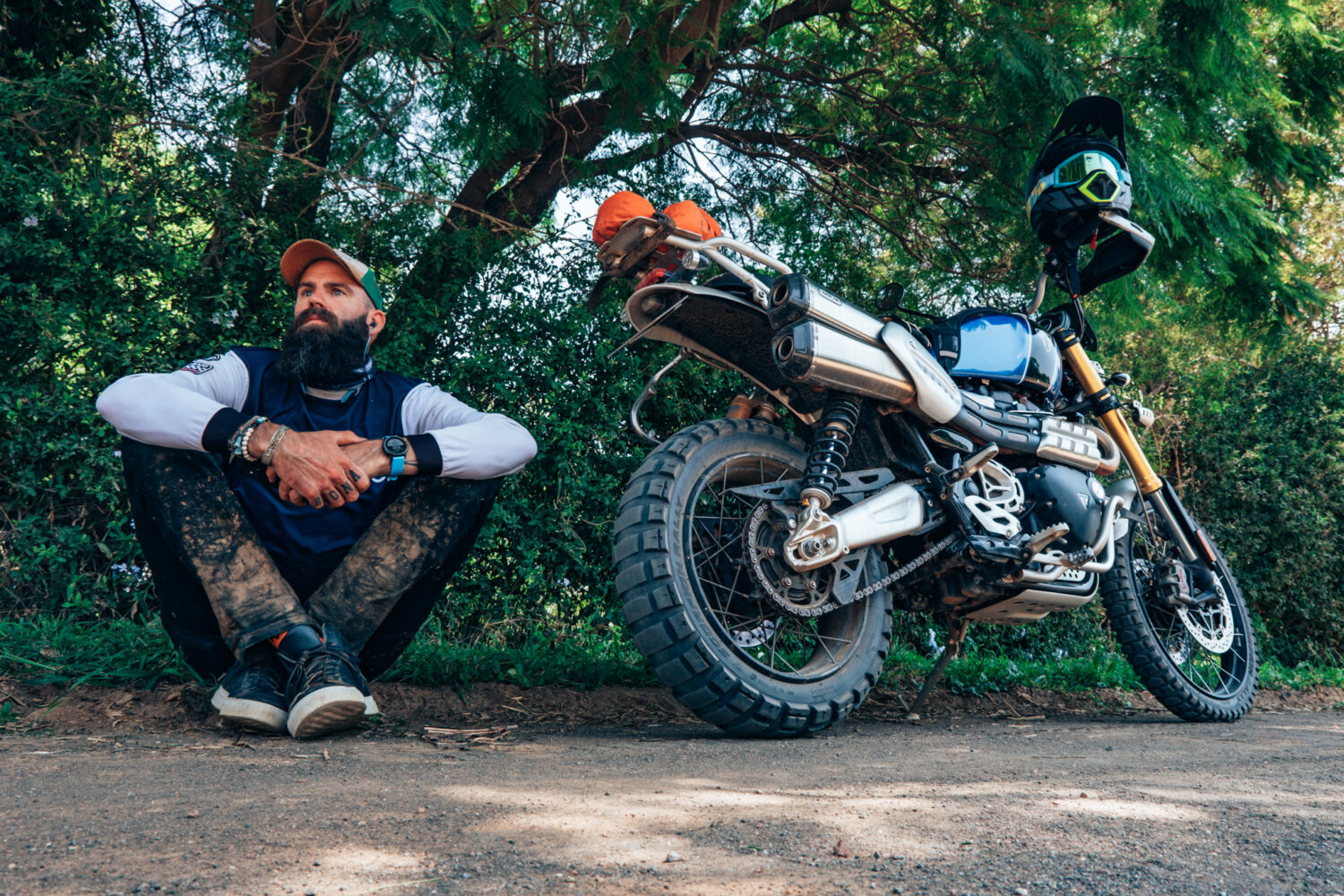 Through this journey of plotting out routes, I’ve started doing more recces on the Scrambler or in my truck throughout the month which has allowed me to find some really cool spots. Not all of my routes work out, and that’s okay. 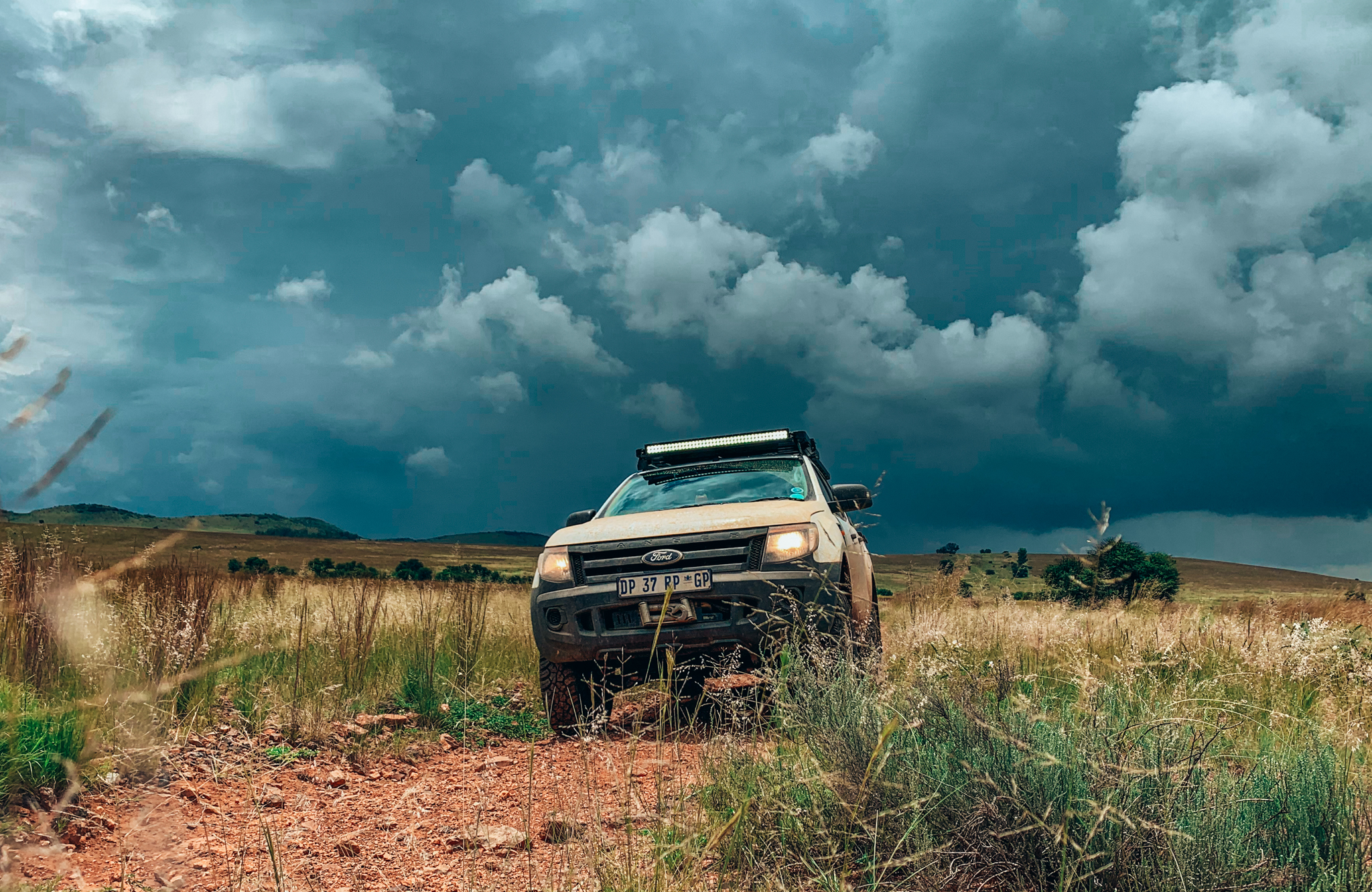 95% of the time I take the bike to do a reccee. On this day, it was just 48 hours from our group ride and it was the last opportunity I had to check the route. With bad weather on the forecast I opted to take my 2015 Ford Ranger instead.

It’s always easy to get lost when you’re solo or with just a few people who know how to manage themselves in tough situations, but it’s a whole other beast to get a group lost and have to make a plan for 30 people, so I always like to test a route before inviting the masses. 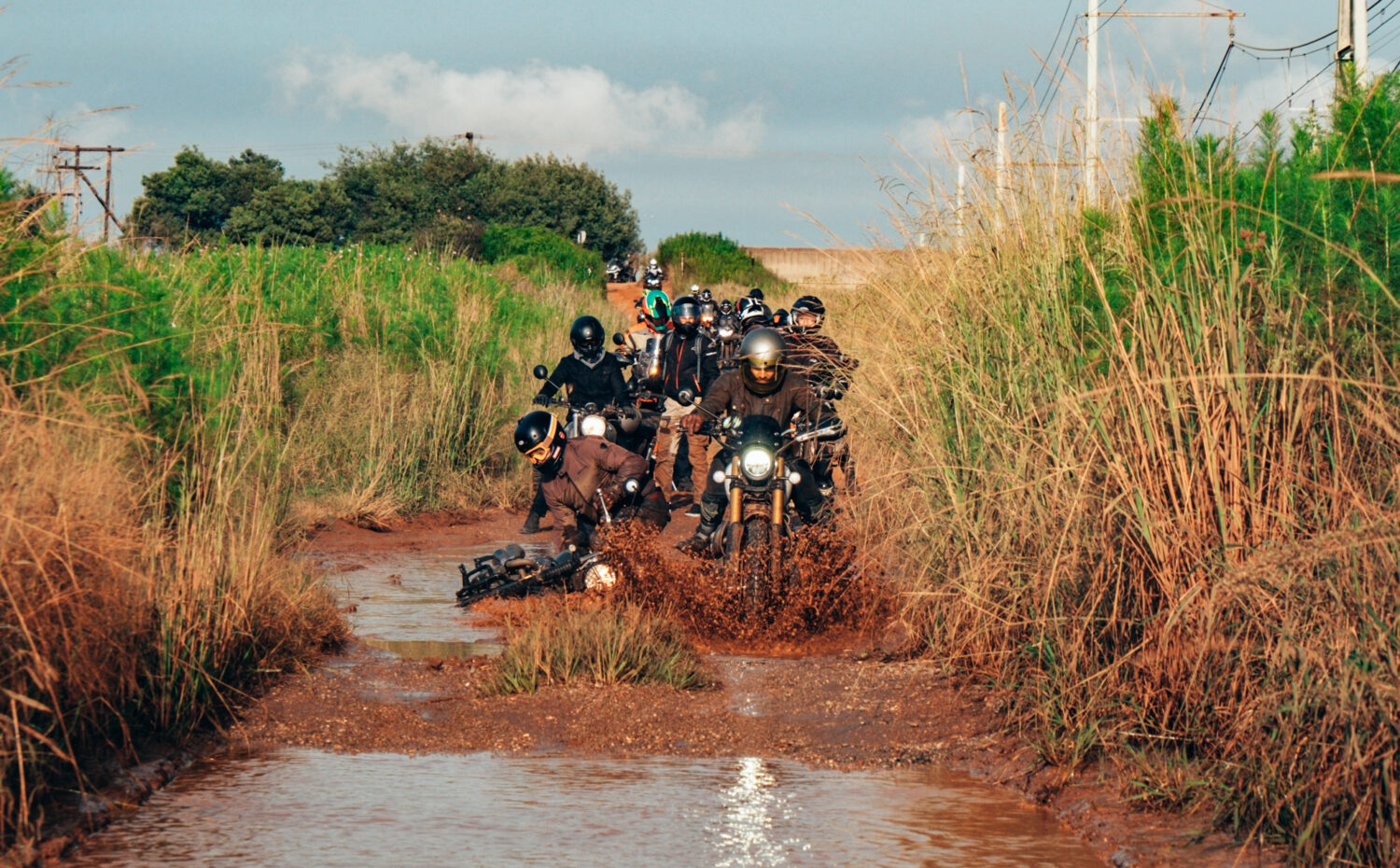 With a big group comes a big range of riding skills. You never know what issues may arise when encountering obstacles.

I remember when I started managing routes that I only had a few to look at. Now it’s amazing to see how full the map is getting. I’ve done my best to color coordinate routes as it becomes a bit cluttered and confusing; blue is for routes I’ve done on the motorcycle, green is for gravel rides I’ve done on the bicycle, orange is for routes to be done, and whatever other color is on the map has yet to be cleaned up.

What I’m hoping to do through all of this is to be able to share with others my curiosity for South Africa, explore this vast country, be able to share the routes I’ve put together with friends, and to have as many blue lines on my map as possible. 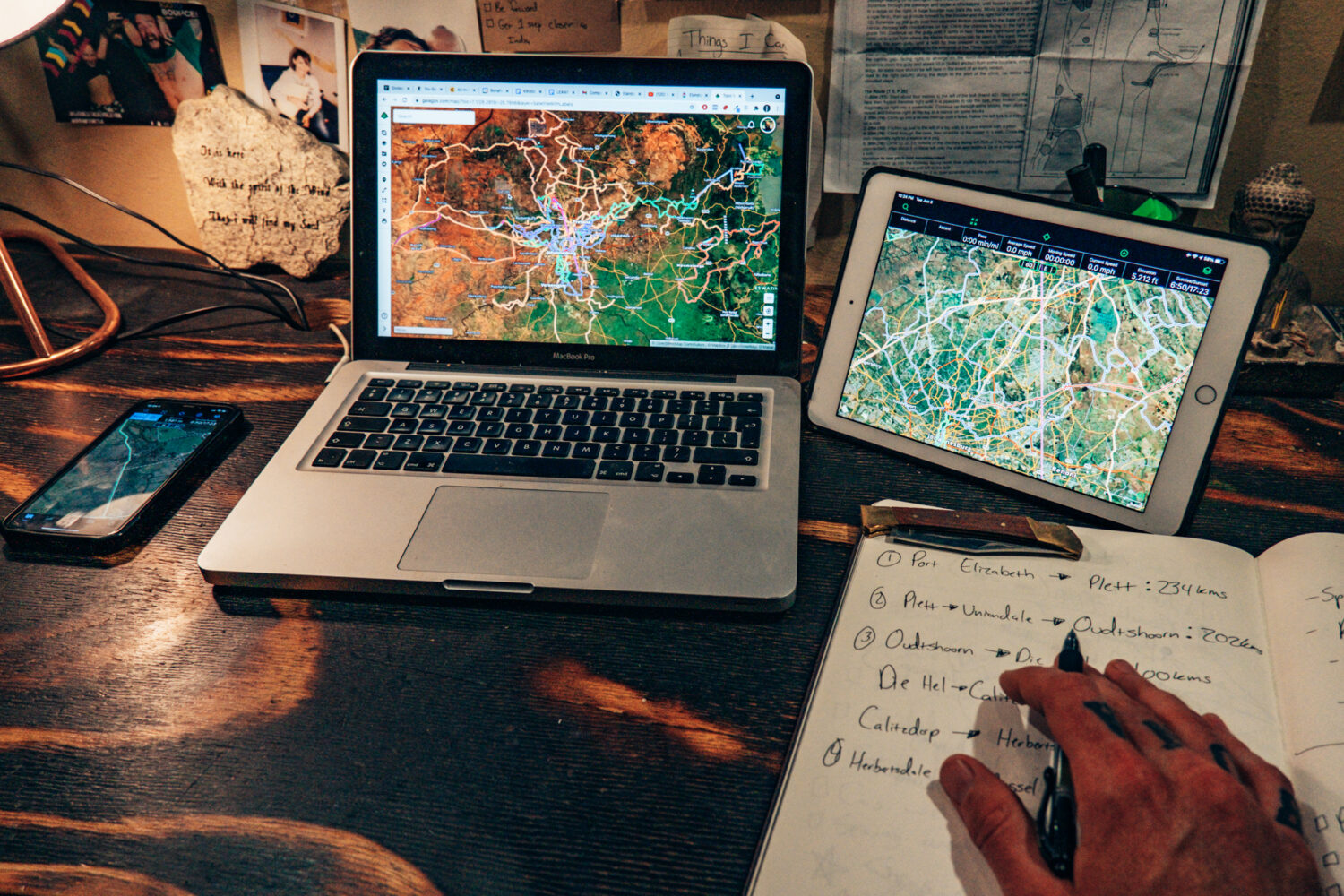 Using applications that work for me to manage past routes, find new ones and keep them all in one place. 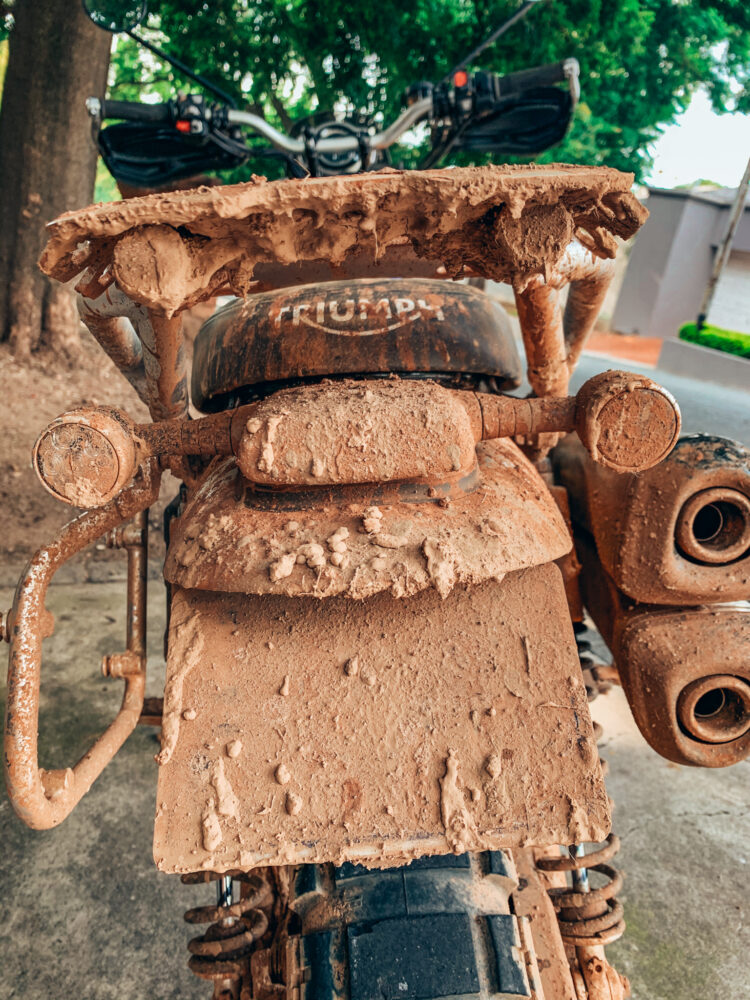 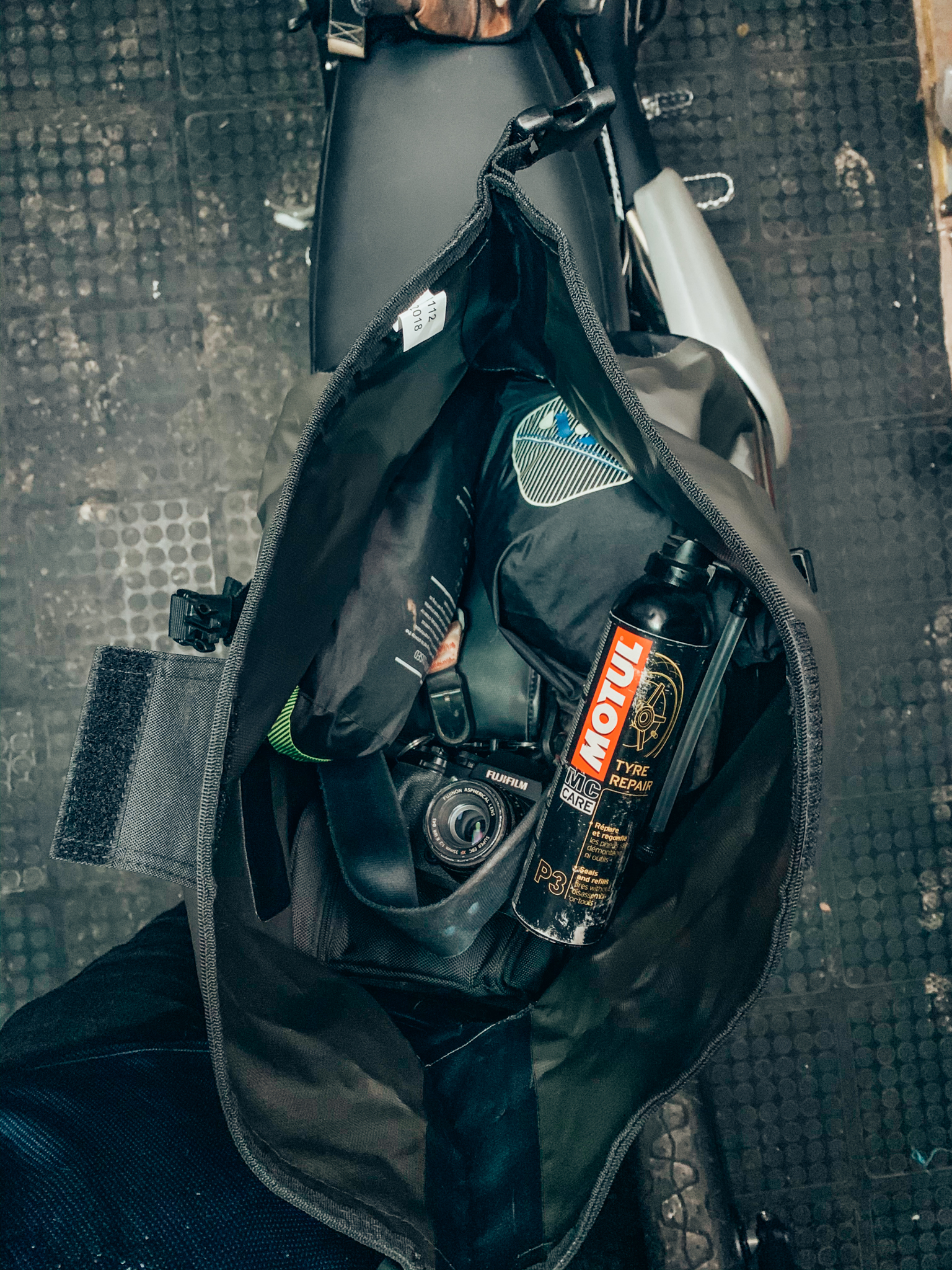 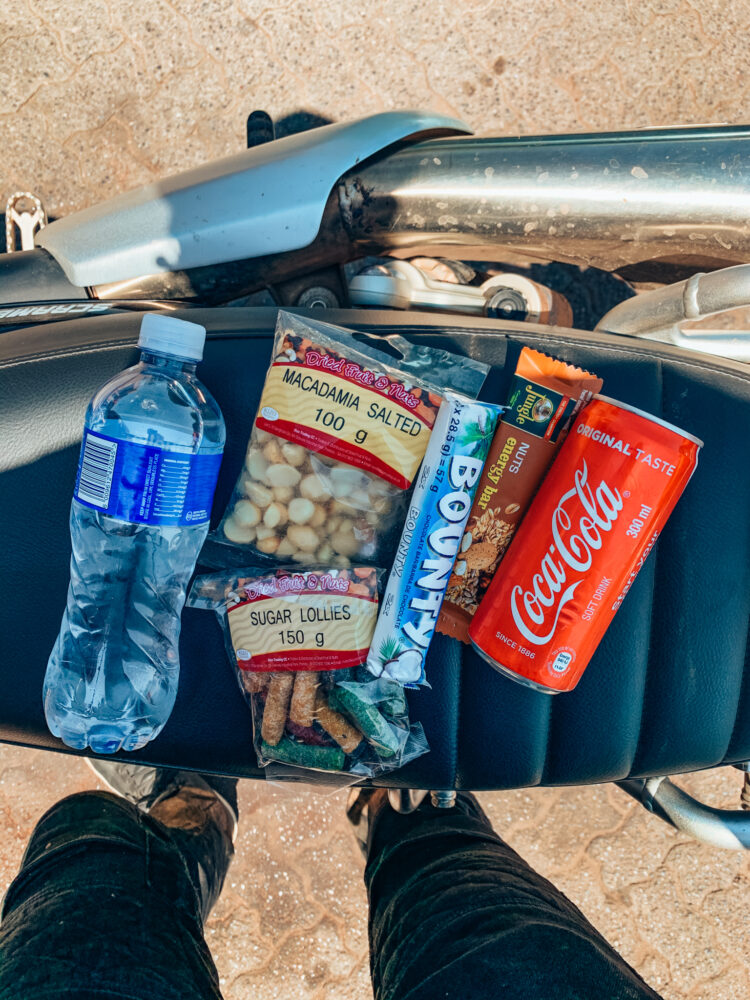 It’s also a good exercise in the value of learning new skills. Just because you are not immediately drawn to something doesn’t mean you can’t be good at it. While our comfort zone can feel like the best place to be, transforming weaknesses into strengths is incredibly rewarding, often opening up whole new worlds.

A born and raised American, Joe is a US Army veteran who has been living in South Africa since 2014 with his wife, Monique, her son, Madden, and their three dogs (his favorite is Abby). He’s an avid adventurer, rock climber, endurance athlete, and photographer. Joe is a natural leader who has used his curiosity for exploring his new home of South Africa to invite others to join him. He has created a niche community of motorcycle enthusiasts and other adventurers through his company, Bonafide Moto Co, which curates unique motorcycle experiences and adventures throughout Southern Africa with eyes on exploring the world.