I hear you thinking, “What, another post on tires? You’ve got to be kidding me! There must hundreds of them on the Internet.” Yes, you are right, another post on tires. But this time I am writing it. Why? Because we get many emails and messages from 4×4 enthusiasts and overlanders asking us what type of tires we use, or why our Land Cruiser has such skinny road tires. 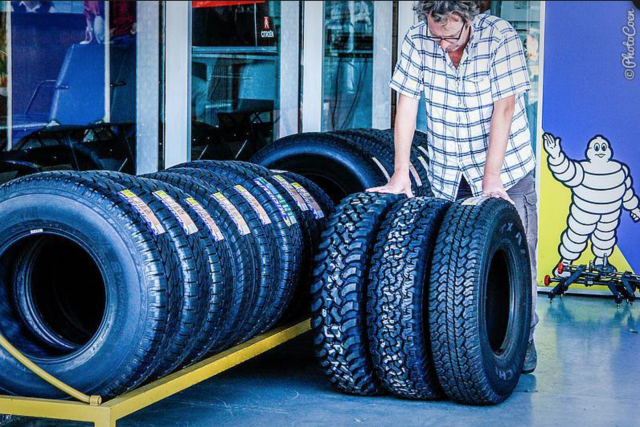 Like with all choices in life, a perfect one doesn’t exist. Same with tires. You will always have to accept certain limitations and live with that. There is no manual that will tell you what choice to make. For me, after twelve years on the road, I am comfortable with the choices we make today.

I learned from my mistakes and we continue to acquire knowledge on the subject as tire options are not the same everywhere on the globe, and you must plough with the oxen that you have. 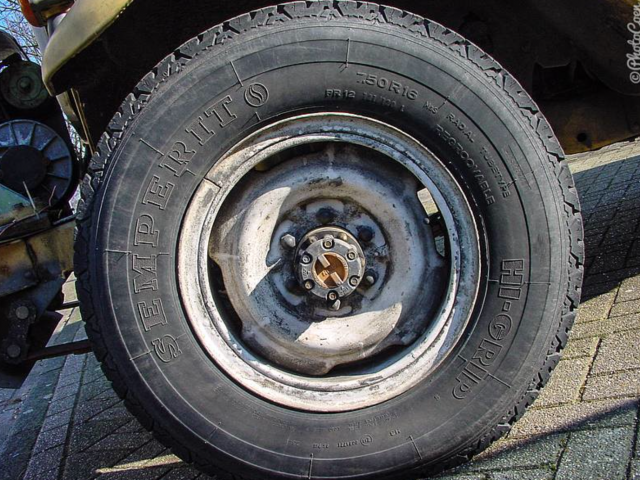 If your journey is less than two years and you are not racing around the globe – driving, say 30.000 kms per year – one set of tires will probably suffice. But if you do plan to buy new tires while on the road, make sure you select the right rim before you start your journey. Find out if the rim-sized tires that you like so much are common on the continent you plan to travel on. This may safe you a lot of headaches (and money).

Why My Fondness For a Skinny, High Tire? 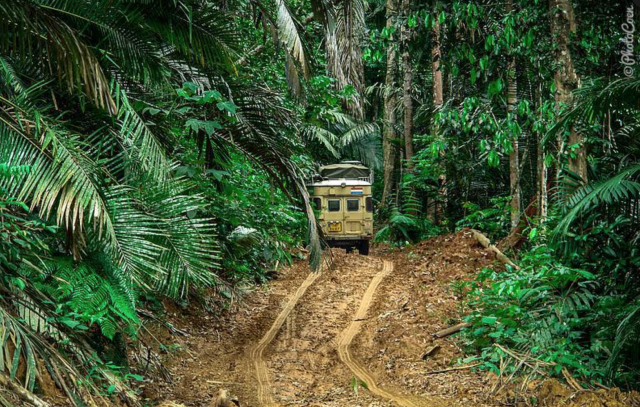 I think it all started with my first car, a Citroën 2CV. They had absurdly thin, high wheels. Once, we had serious snow. When driving into town I saw big, luxurious cars swerving into problems in corners. This was mainly caused by the weight of their vehicle and the fact that it had rear-wheel drive. Meanwhile, the 2CV was cornering without a problem.

Okay I hear you; a big-ass Land Cruiser is not the same as my ‘ugly duckling’. You are right, but the principle remains more or less the same. Stick with me and let me explain. 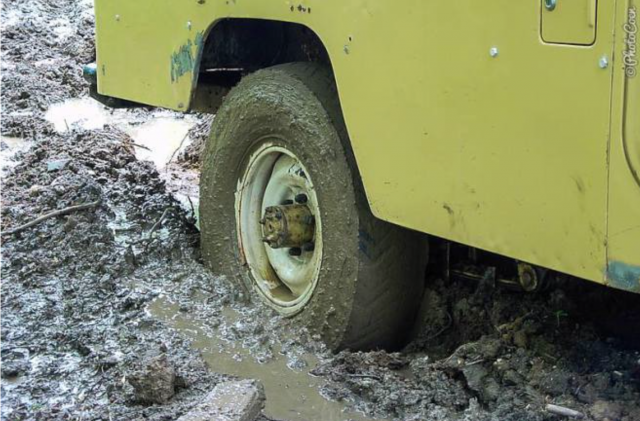 For these conditions I look for the following when buying a tire: 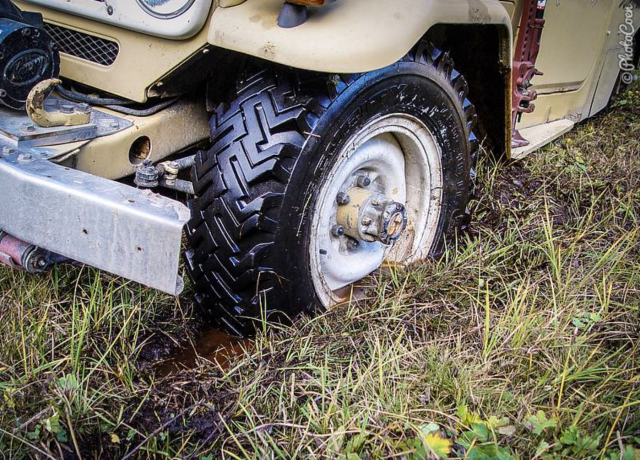 When those tires have also the ability to: 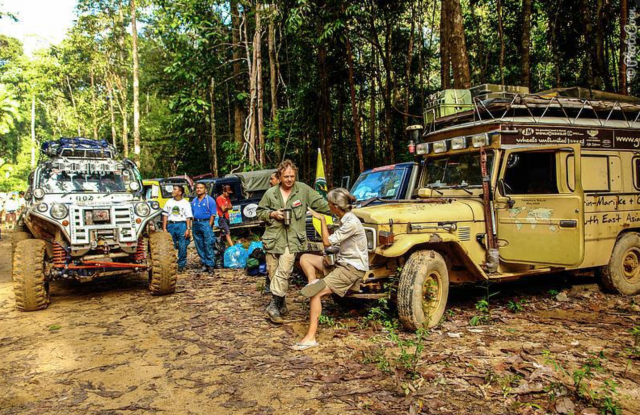 During our Landcuising Adventure we have bought a variety of tires and while all those tires were different in some degree, I felt confident taking all those tires into the mud, going rock climbing, driving into the dunes, on gravel roads, and into snow. To a certain extend tire pattern can help you overcome the terrain, but I am convinced that tire pressure, the driver’s capacity, as well as gear choice are of greater importance. 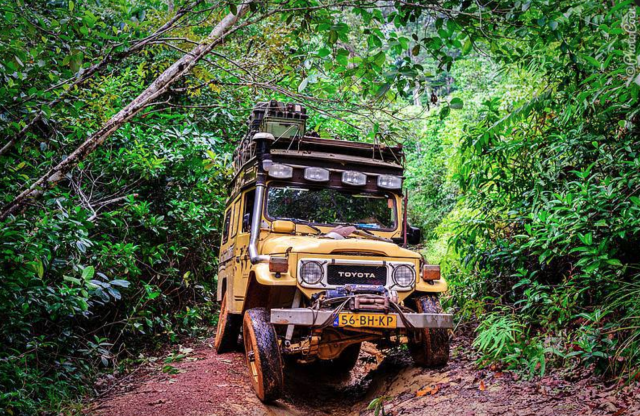 When we arrived at Malaysia’s famous Rainforest Challenge we were laughed at with our Land Cruiser’s skinny, Indian road tires. But during the ten-day event we gained a growing respect as we conquered the terrain and daily rolled into camp. 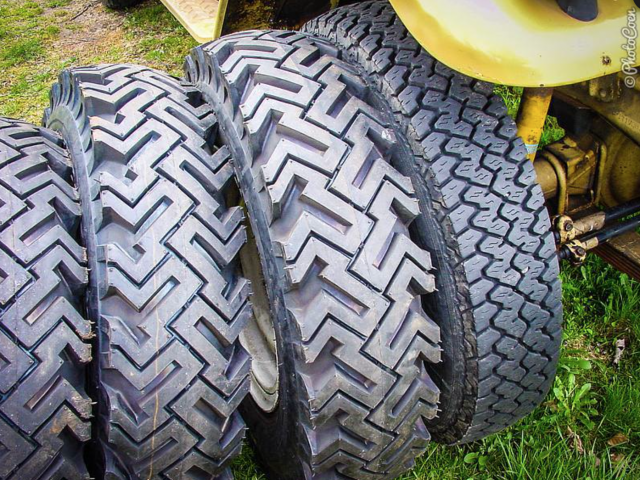 At the beginning of our trip I bought Chinese, aggressive, nylon off-road tires. They looked tough and many off-roaders asked me where to get them. But they were noisy as hell, gave us bad mileage, were bumpy and uncomfortable although they were only 8 PR. 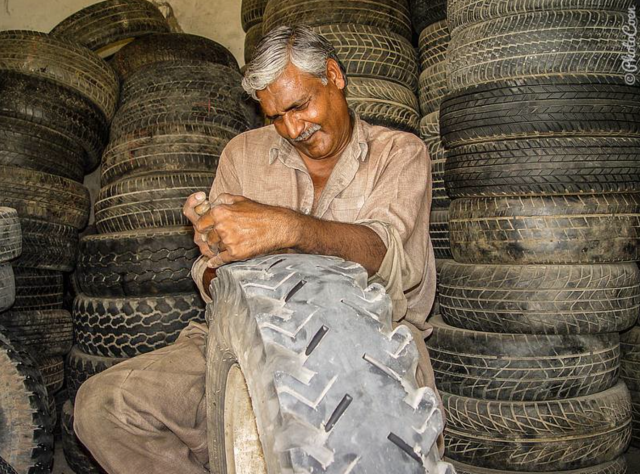 On the plus side, these tires were regroovable so we brought them to a shop in Rawalpindi, Pakistan. We could select a different pattern if we wanted to, but stuck with the existing pattern in order not to destroy the underlying fortifications.

You may not be familiar with regrooving tires or retreading but in Asia and South America it is not uncommon. It is a viable option to keep your tires going for just a little longer. 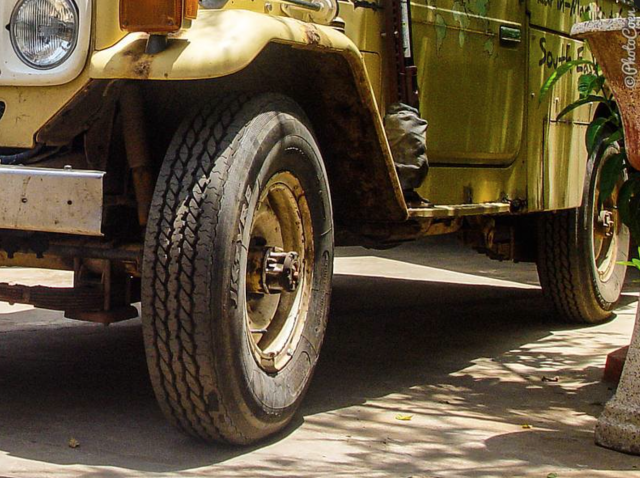 In India the thread started to show so we had to replace the tires. There wasn’t much choice so after a day’s search we bought lovely JKTire radials with a road pattern. Those tires gave us the most bang for our buck and, in fact, we were so content with them that I tried to get another set in Iquique (Chile) a couple of years ago.

Good mileage, no noise and very comfortable. They brought us to the finish of the Rainforest Challenge and got us rock-climbing on the Ho Chi Minh Trail in Laos (find the story here). 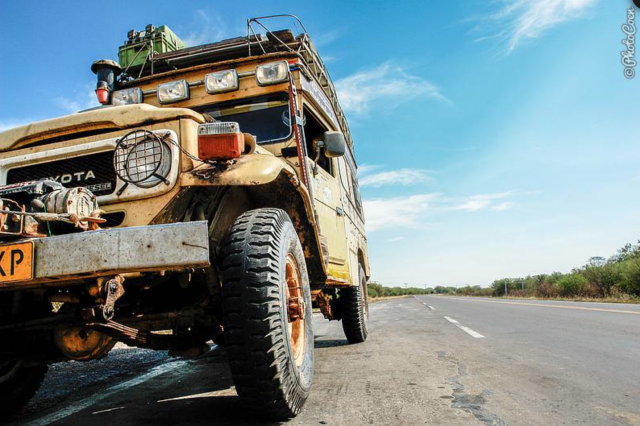 We obtained our third set of tires in Paraguay, tax-free haven of South America. We made a strange but good choice buying Brazilian-made Nylon Pirellis, as we knew we were in for two years of rípio in Patagonia, and no matter what tires we would buy, they was going to be discarded after those two years.

Salient detail is that these tires were 50% cheaper in Paraguay than in their production country of Brazil. Thanks to a 14-ply rate we had no sidewall punctures. They were a bit noisy on asphalt and affected a little on the mileage. For a nylon tire this one had a pretty good comfort. But we decided that from then on we would stick to radials. 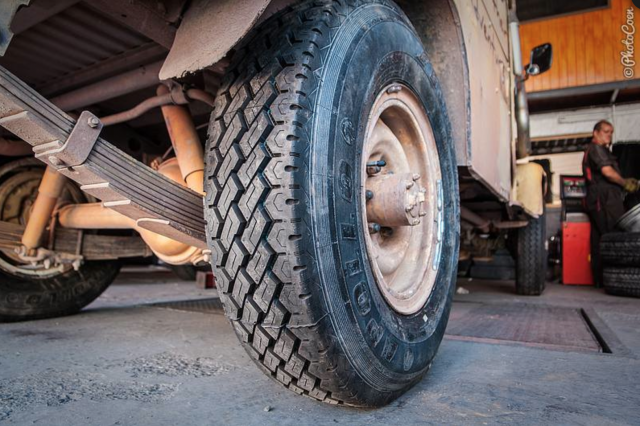 Next up: Iquique (Chile). Here I tried to get my hands on some JKTires but couldn’t find them. However, I stuck with the Indian thought and got a nice set of Apollo radials. I had the choice between a high miler [highway pattern] and a dura miler [mixed pattern]. We opted for the last.

I think this has been a solid choice with good comfort and mileage and no noise. Only downer: a few weeks later we discovered could have gotten genuine French made Michelins ZXY [check] for 80 U$D! in La Paz, Bolivia. 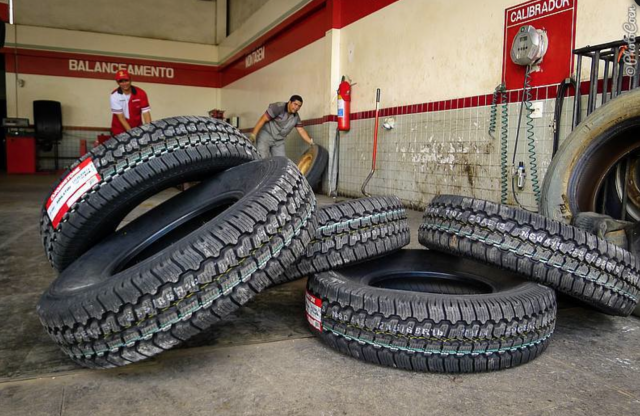 Two years later, just before we set out to cross the infamous BR319 and the Transamazônica in Brazil (read about them here and here), we needed new tires and found ourselves in Manaus. Strangely we couldn’t find our magic numbers so we set out to find the best next thing, a 235/85R16.

Many say these have the same height and width of the 7.50R16, but I beg to differ. These tires might look the same but are actually a tad wider and give less mileage and more wear [tie rod ends and center arm wore prematurely]. Also, the 235/85R16 generally come with less sidewall protection and a lower ply rating, resulting in more sidewall punctures when aired down. 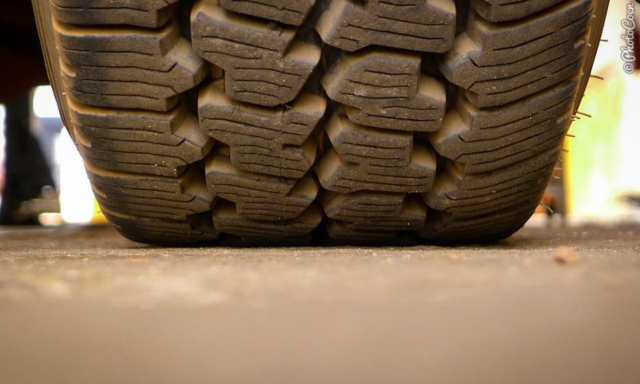 On the plus side they are very comfortable. One thing that really annoyed us were the many rubbing punctures we got during their second and last year. I don’t know whether this was due to the fact that we used tubes while it said tubeless, or not. We had been using tubes in tubeless tires before with no problem. Then I thought it was due to the fact that the tubes were more than nine years old and replaced them all. But the rubbing punctures kept on happening and drove us nuts. 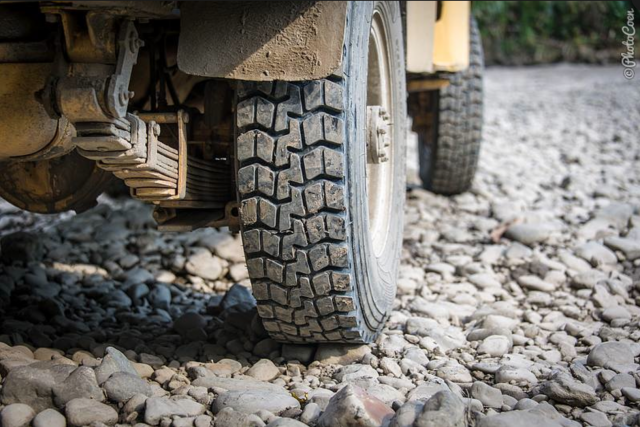 Time to get our sixth set of tires. Initially the idea was to get new tires in Venezuela where they should be cheaper than in Colombia. But after checking various sources we concluded that it would be difficult to get tires in Venezuela (due to political situation) and pulled the trigger on getting them in Bogotá.

We are very happy with that decision. Although we have seen our magic-numbers-tires in Venezuela for bargain prices, the old tires wouldn’t have made it across Los Llanos in Colombia. 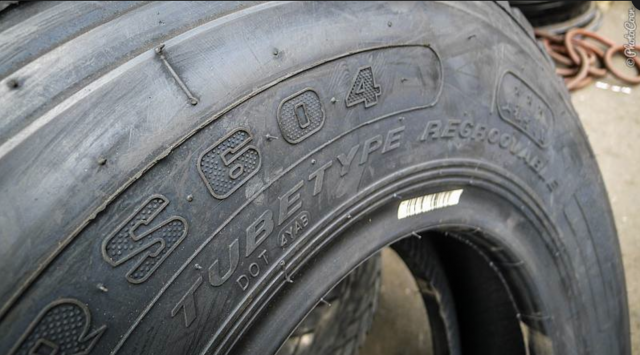 Do you see the regroovable marking on the side of the tire? This means these tires have plenty of rubber on them and when they are becoming worn and slick you just go at them with a gouge and you are good to go.

Once you know where the tire shops are, be prepared to bargain and look beyond the obvious. My criteria, after 12 years, has boiled down to the following:

This gave me the choice between the excellent Japanese Sumitomo highway pattern or a Chinese B brand with a bit more Mud + Snow pattern. Prices were almost the same with the Chinese being a bit cheaper. Time will tell if I made the right choice. For now we are super happy!

Read this article and many more at: [Click on the banner]