Had it not worked out as well as it did, it would have been a foolish thing to take an untested tent to the unforgiving highlands of Iceland. Before embarking on my two week unsupported mountain bike trip to the island I had tested every piece of my gear countless times knowing the margin for error was slight at best. I’d like to say I simply have a keen eye for good gear, but truth be told, the Terra Nova reputation had much to do with my confidence in selecting the Laser Competition 1 as my chosen shelter.

At just two pounds and only slightly larger that a foot-long hoagie, it seemed impossible that such a diminutive tent could endure the infamous winds and torrential rains of Iceland, but for a dozen nights straight it did just that. Not to give away the ending, but this is a great little tent.

Here in North America, consumers are woefully addicted to the free-standing tent. For some reason our tent using populous has been influenced to think that a tent like the Laser Competition 1, by virtue of its stake-dependent design, is some sort of liability. The inverse is probably more accurate. Hoop tents are the chosen architecture around the world where severe weather is not just a threat, but a promise.

The Laser Competition 1 uses a single DAC aluminum pole paired to two small carbon fiber struts to give it a high peak with a surprising amount of vertical space at the ends for more useful living space and improved ventilation. The one main pole threads through a sleeve on the rainfly and the inner tent room hangs from that outer shell. This greatly adds to the pitching ease of the tent. For my rainy journey through Iceland, this also offered the added bonus of being able to pitch the tent without exposing the inner room to any rain. 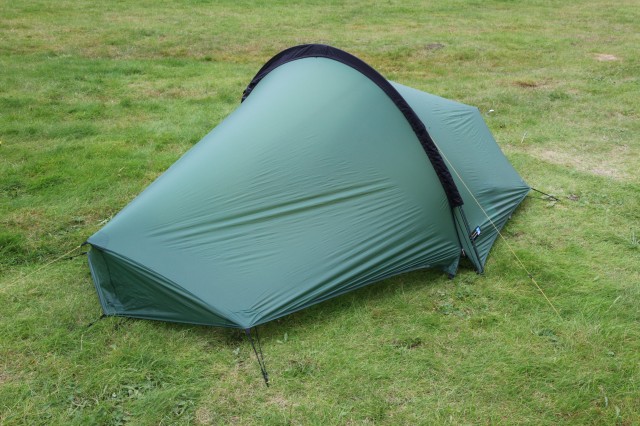 If the Laser Competition 1 has an advantage on many other tents, it would be with the speed and ease of setup. The process starts with inserting the main pole into the central sleeve. Then the two primary ends are staked out. The final step is to insert the remaining stakes, of which there are ten in total. This may seem like overkill, and perhaps it is, but it serves to give the tent an impressive level of stability and roominess. As an aside, for those in need of the lightest system possible, the inner room can be removed and the fly pitched by itself for a one-pound floor-less shelter. Even in winds gusting to 35 mph, I could get the Laser Competition 1 fully pitched in under five minutes with little fuss or effort.

This is perhaps a painfully obvious statement, but most ultra-light tents get to their feathery weight by simply shrinking in size. I’m not a big guy, but at six feet tall, I did find I had plenty of room in the inner tent with ample space to accommodate virtually all of my personal gear. The vestibule proved to be my favorite attribute of the Laser Competition 1 as endless days of rain kept me sequestered to my nylon haven for hours on end. I was able to easily stash wet and dirty items in the vestibule, still keeping them within easy reach. There was also ample room in the vestibule to cook meals. Yes, yes….don’t ever do that as it’s dangerous. The high peak inside the tent allowed me to sit up to eat meals, change clothes and in general, not feel like I was crammed into a tiny box. 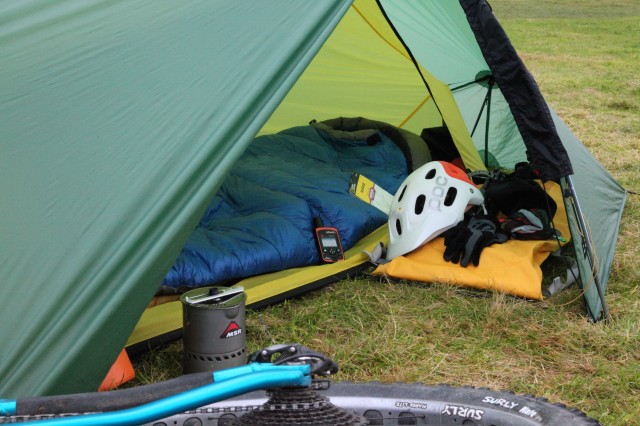 The inner tent body has a nice shape although the tapered ends do put the tent fabric close to the sleeper’s face. Not something that bothered me, it may not be ideal for those with claustrophobic tendencies. The full sized side door made access to the entire vestibule easy and that vertical wall gave the tent a sense of roominess that’s hard to describe. If there is one minor niggle with the inner tent body, it would be with the way it drapes into the interior space of the tent. Because the inner tent body hangs from the rainfly, it is a touch saggy. Not something that bothered me, though. 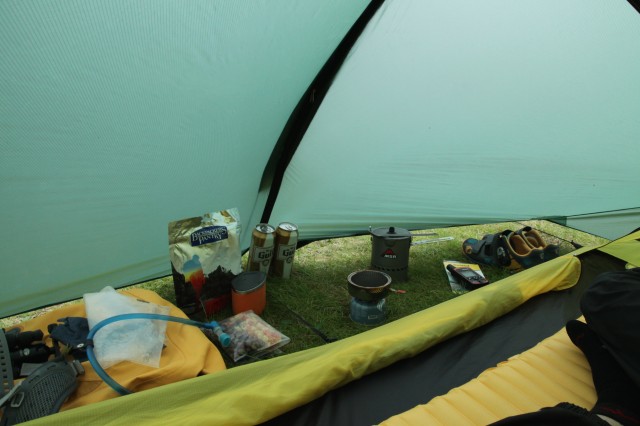 Being a featherweight tent, features do not abound on the Laser Competition 1. There are no interior pockets. The window has one large mesh panel paired to two smaller mesh panels at the opposing ends to aid in ventilation. As features go, that’s about it. For this particular tester, I put the lack of pockets and features as a decidedly nice bonus. Simplicity has its place, and the Laser Competition 1 is if anything, elegantly simple.

As befits an ultra-light tent, the flysheet is constructed of high-tech silicone coated nylon. The floor of the tent is constructed of the same material. Both of these components are tissue-thin, but surprisingly robust. The inner tent is made of 6.6 ripstop nylon. Nickel-plated YKK sliders on all of the zippers kept things tracking smoothly with not a single snag on the nylon storm flaps. It’s the little things like that which make all the difference and can make a good tent an endless frustration if the zippers don’t cooperate. The DAC aluminum main pole and carbon fiber struts are of the highest quality and the tent stakes, well, you have to see them to believe them. At 2 grams each, they’re the lightest stakes I’ve ever used. They also look like toys, not outdoor tools, prompting me to pack 8 Y-stakes as a backup. Given how dense and organic the soil is in much of Iceland, the included stakes were easy to drive into the ground, and despite my serious doubts they would hold, never faltered. In conditions where more sand was present, having heavier duty stakes was necessary. I am however sold on the minuscule needle stake. 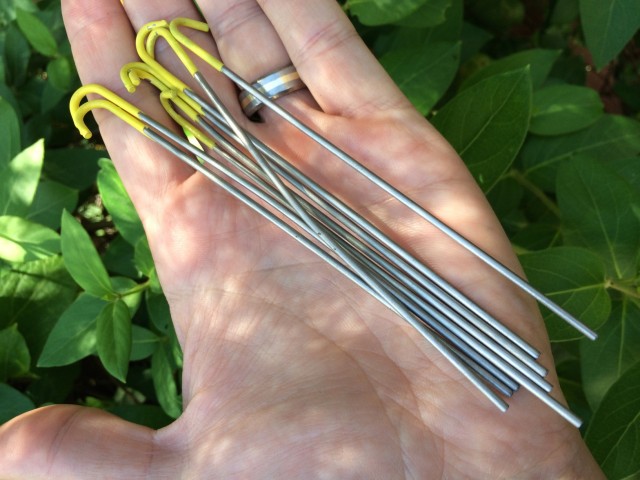 Going into my trip, my initial concerns (beyond the microscopic stakes) revolved primarily around the need to secure the tent to the ground with so many stake points. This proved to be a none-issue, but for those people traveling to areas of the world where getting a stake in the ground is not an easy prospect, the Laser Competition 1 could present some challenges. I also did notice what I might consider a greater degree of condensation than I would have liked. This was compounded by the wet environment I was traveling in, but a small vent at the peak would have been a modest additional few grams, but much worth the effort.

As a resident of the southwestern U.S., I do think this tent lacks the ventilation we often prefer and the ability to pitch the tent without the fly is simply not an option. I would not place these peccadilloes under the auspices of negatives but simply considerations for the end user. For my purposes, the fact the fly snugged up so closely to the ground was a much appreciated attribute, particularly when sleet paired with 35 mph winds threatened to encroach on my dry space.

Another attribute that I found to be of great use was the ability to unclip just half of the inner room, thus creating enough space to store my rather large fat-tired mountain bike. That was a discovery that blew my mind. Needing a place to stash my bike while I went to a nearby store to gather supplies, I thought there would be no possible way my bike would fit inside the tent, but it did. For a one-pound fly structure, it is really quite large. 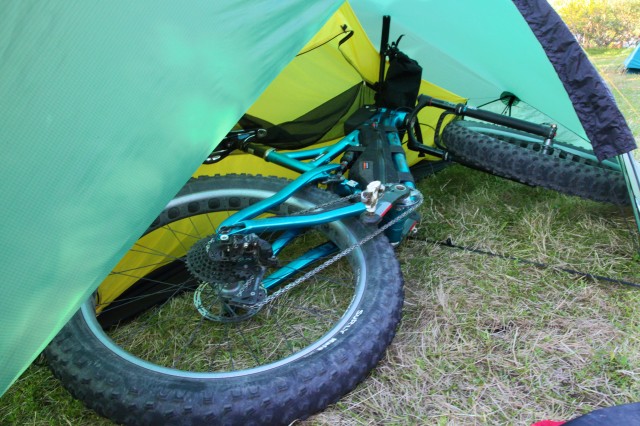 I should also mention the one somewhat quirky component to the tent, which is the small black cover over the main pole sleeve. This initially struck me as a strange afterthought. The purpose of that sleeve is to protect the exposed seams on the flysheet, thus fending off the threat of leaks. It also provides two additional guy-line points. Although it can be removed to further reduce weight, albeit minimally, it appeared to function flawlessly. Despite the flysheet’s lack of any sealed seams, the three main seams were strategically shielded by the black cover or placed where leaks would cause no ills. Even during 12 days of endless rain, I suffered not a single drop inside the tent.

There are a couple other clever refinements that I appreciated. Each stake-out point is joined to the tent with elastic cord. This gives the tent the ability to move with the wind and not fight it too much. When the occasional 45 mph gust would strike, the tent would shoulder the force with a slight wiggle, never feeling like it was ever strained or in danger of collapse. Like all products, even the excellent examples, there are always a few minor nit-pics to consider. In the case of the Laser Competition 1, I might consider the small door opening on the flysheet as a minor grouse, but that’s about all I have for proposed improvements. All in all, it’s really a brilliant tent.

As a bikepacking or even motorcycle tent, it is an excellent option. For desert travel, it may not be an ideal solution due to limited ventilation and the inability to pitch just the inner tent body alone. For milder climates, particularly those prone to high winds or rain, it is an outstanding performer. After my dozen consecutive nights in the Laser Competition 1, I was quite bummed to pack it up, but it won’t be long before I get to use it again.

More information can be found at Terra Nova UK 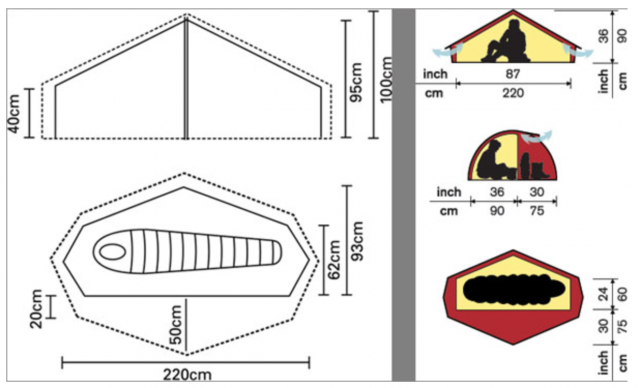