In 2014 while traversing the interior of Iceland on a mountain bike, I arrived at a campground on the shores of Lake Alftavatn just as an ugly storm started to build. I pitched my tent amongst a dozen others and hoped my nylon sanctuary would hold. By midnight the winds had reached a fever pitch and a cacophony of voices could be heard, most of them frantic and distressed. As morning arrived, I surveyed the scene which was more dire than I had anticipated. Of the tents standing at the start the night, only three remained. The rest were a tangle of broken poles and shredded fabric, their occupants wrapped in wet sleeping bags, huddled together for warmth.

Amidst the carnage was a lone red tent completely unfazed by the event and didn’t appear to yield a millimeter to the strongest gusts. Without being able to see the label, I knew quite well it was a Hilleberg. Not a Staika, it was however very similar. 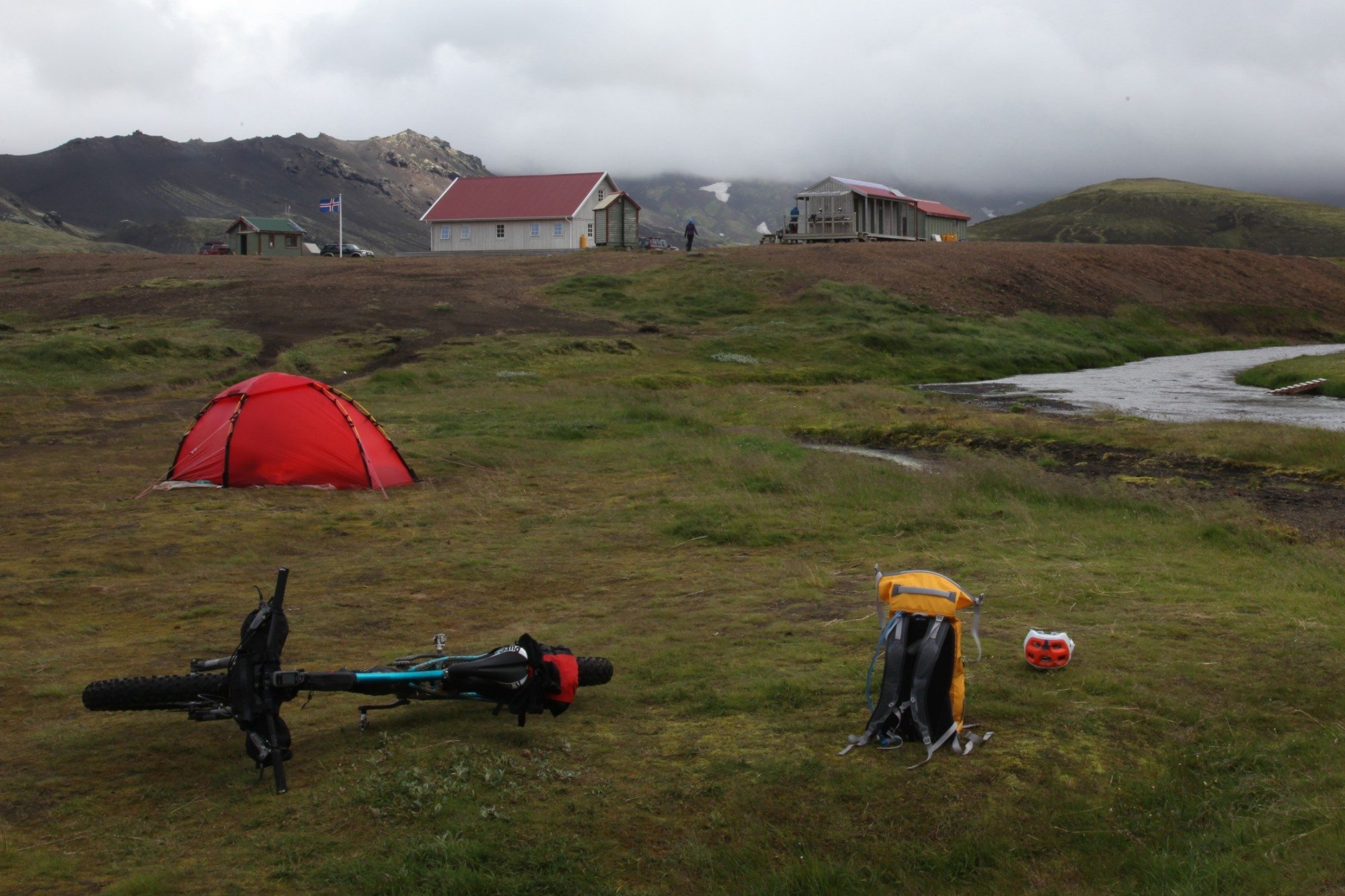 The tent in Iceland that didn’t die in a windstorm. I got to meet the woman with that tent later in the day. She said before she left her native London, she asked her local gear retailer, “What’s the best tent I can buy?” Answer––delivered.

Designed as a fortress for two, the Staika has long been one of the brand’s flagship models, a tent proven time and again in some of the harshest conditions in the world. Favored by many for its free-standing architecture, the Staika is crafted with cutting edge materials packaged in a design purpose-built to endure weather’s most brutal assaults.

Constructed primarily with Hilleberg’s proprietary Kerlon 1800 fabric with a 44-pound tear strength rating, the outer shell is virtually impossible to rip. I know because I’ve tried to do so many times over. Every Hilleberg catalog contains samples of fabric swatches used in the fabrication of their tents and try as I might, I cannot tear a single one of them, I really can’t. 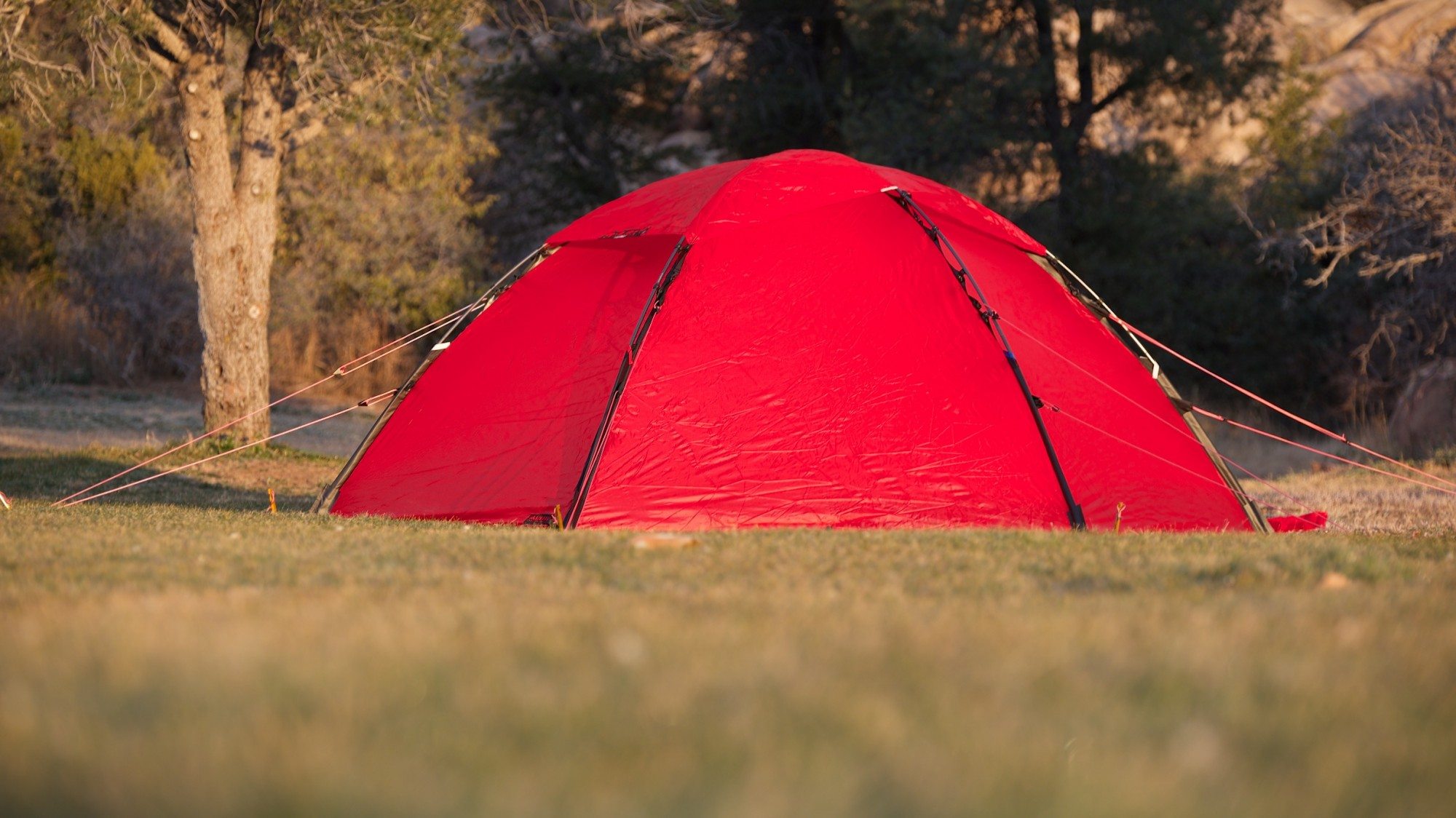 Tear strength is a critical consideration for those venturing into hostile environments, but most of us are more concerned with everyday storm worthiness. To that end, Kerlon fabric is coated on both sides with three individual layers of 100% silicone. Other manufacturers, in an effort to trim costs, will use a diluted silicone mixture, often opting to coat one side of the fabric, or with one thick layer which is more likely to delaminate and peel. This multi-layered application of pure silicone also bolsters the tear strength, abrasion resistance, and overall durability of the fabric. It’s often what you don’t see that makes the biggest difference. 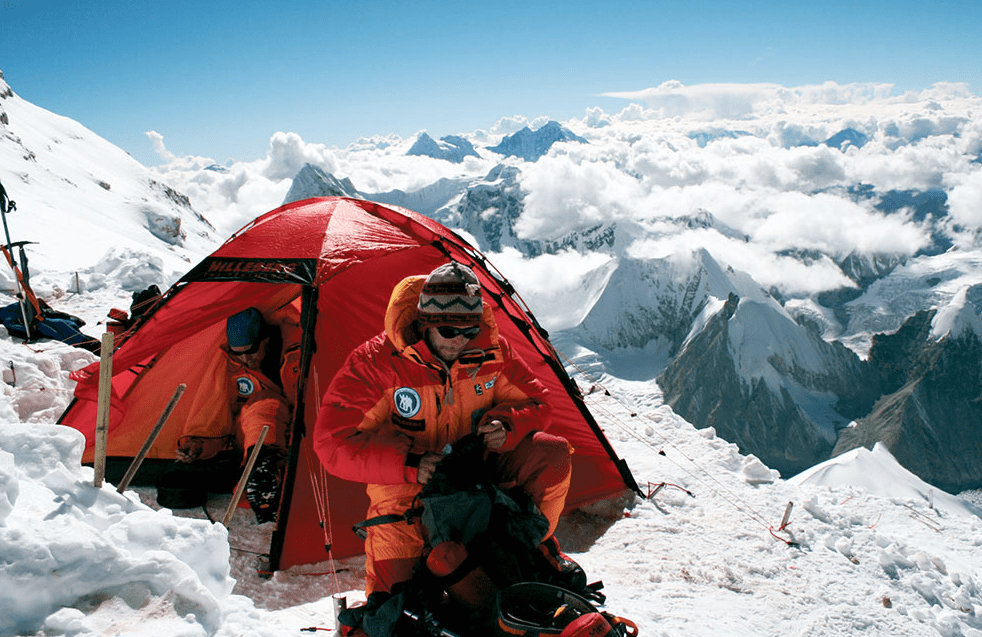 What makes the Staika so unique is its freestanding architecture. Most freestanding tents require at least a few stakes to hold the vestibule in place. The Staika’s structure places the poles in the outer shell layer, thus propping up both vestibules and the inner tent.

Pitching the Staika, while not particularly quick, is relatively easy. The three 10mm aluminum poles are of equal length and make the process uncomplicated and straight forward. Utilizing an innovative combination of color-coded pole sleeves at the lower aspect of the tent, and convenient clips on the upper half, the Staika can be pitched by one person without too much effort. Because the Staika’s structure is provided by the outer shell, the inner tent is never exposed to the elements during setup, a feature that is instantly appreciated when pitching the tent in a storm.

The inner tent, with its generous 35.5 square feet of living space, sits in the middle of the main structure with dual doors and vestibules on either side. The walls are surprisingly vertical for a dome tent and the 41-inch peak height affords ample headroom. The symmetrical floor plan allows the occupants to sleep head to toe if desired and the twin vestibules swallow large amounts of gear. The advantage to dual doors and vestibules are obvious. Each occupant has their own entry and exit point and needn’t crawl over the other to get in or out. For the soloist, one vestibule can be used as gear storage and the other as the entry and exit point. 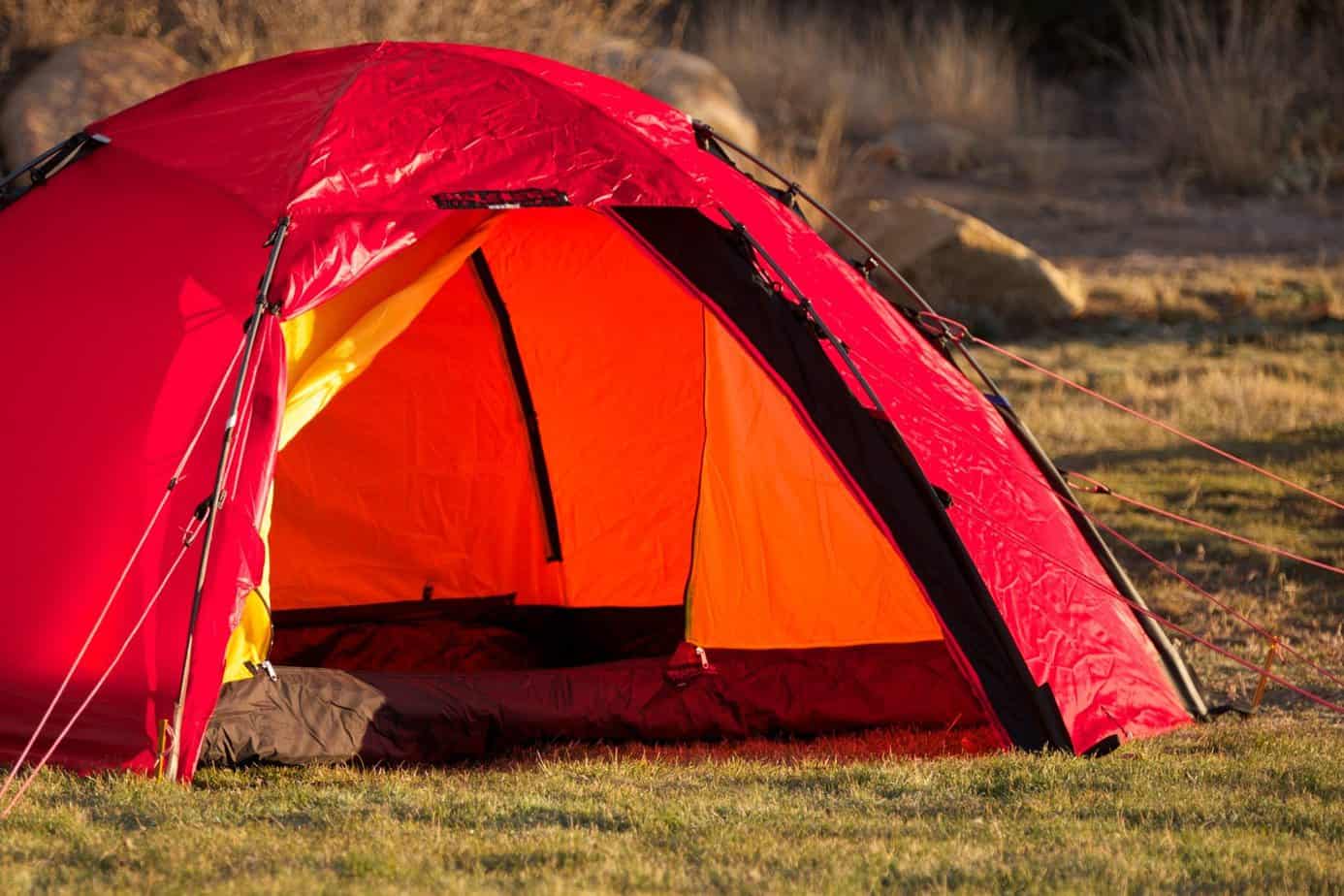 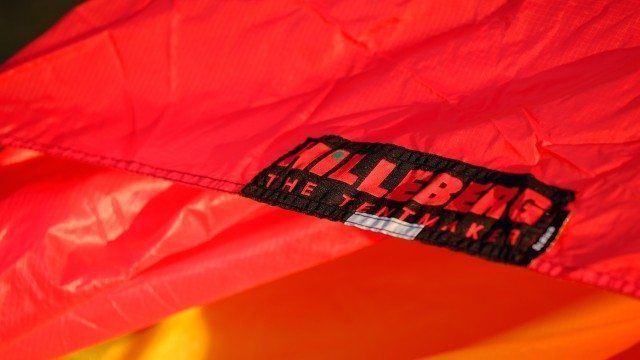 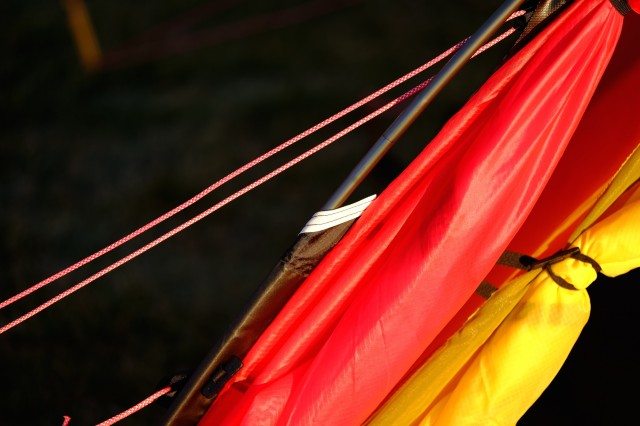 Because the Staika’s structure is afforded by the outer layer, it offers a high level of wind stability. Most double-wall tents place the poles on the inner tent with the guy lines attached to the flysheet, then tenuously connect to the tent body within. The Staika’s guy lines are anchored directly to the outer layer at the poles. The result is a dome that has regularly been called––bombproof.

Other refinements include mesh backing on the doors and a large peak vent for optimal air pass-through. There are pockets on alternating sides and large storm flaps over the zippers to keep the elements from creeping in.

It would be difficult to levy any negative criticisms against the Staika as it is a near perfect shelter, but I do concede there are some considerations to keep in mind. Because the poles mount to the outer shell, pitching just the tent body alone for use in dryer climates requires additional pole holder accessories. The tent body also has a minimum of vent options other than the mesh-backed doors and peak vent. Again, this could be a factor for those using the Staika regularly in warm and dry conditions. I should note, there is an optional full mesh inner tent body which can be added for $205.

Lastly, in an effort to bolster storm worthiness, the flysheet extends all the way to the ground, somewhat limiting air passthrough during warm days when even a slight breeze can be welcome respite. On warm nights when weather forces the vestibule doors closed, the Staika can become a stifling chamber and compound issues of condensation.

If there is one parting note, it would be relative to weight. Some might issue demerits for the near nine pound weight of the Staika, but I would not couch that number as a negative. Expedition grade equipment has to be made with expedition grade components, and that invariably adds ounces. However, when hurricane force winds and heavy wet snow threatens to ruin your trip or worse, those extra ounces are worth their weight in gold.

Is the Staika worth its reputation as one of, if not the best, tents in the world? I would say without hesitation––yes.  –CN 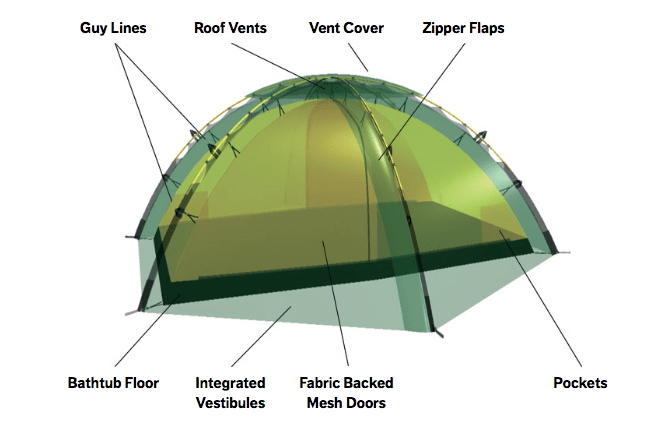 Ideal applications: Bicycle touring, motorcycle travel, and vehicle travel where space and weight are a concern. It is a perfect choice for harsh conditions, or for those wishing to buy a tent that will endure years of constant and hard use. 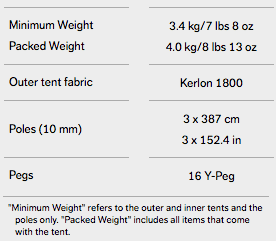 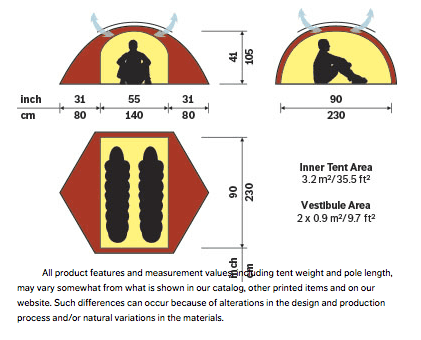 About Hilleberg the Tentmaker

The Hilleberg brand was formed in 1971 by professional forester Bo Hilleberg in his home country of Sweden. Unsatisfied with the double-walled tents available to him, he set out to design a shelter which allowed the inner tent and rainfly to be pitched simultaneously. Within just a few years, Bo began researching advanced materials and began building all of his tents with a silicone coated rip-stop fabric called Kerlon. That fabric was years ahead of its time (and still is) and offered an unprecedented 33-pound tear strength rating.

By 1990, Hilleberg tents had already garnered worldwide acclaim and that same year saw the introduction of the now famous Hilleberg Staika dome tent. Subsequent years saw the arrival of the Saivo with its hybrid sleeve and clip architecture, and then the Kaitum, Allak, and just last year, they released their 2-pound, 7-ounce Enan, a one person shelter sure to win instant followers.

At the core of the Hilleberg ethos is an uncompromising dedication to design and build the best tents in the world. An ambitious objective, they have proven time and again that their shelters  set the standard for durability, storm worthiness, and longevity. Still operated by Bo, his daughter Petra, and his son Rolf, Hilleberg the Tentmaker is still very much a family run business.

Almost all tents sold by major manufacturers come with a limited lifetime warranty. The operative word here is “limited.” Warranties ultimately hinge on the culture of support backing the brand and Hilleberg has one of the better reputations in the business. Failures are rare, but they do happen. Judging only by anecdotal evidence, those who have had to address warranty issues have been overwhelmingly pleased with the results. It’s hard to put a price on service, but it should be considered when purchasing any product. 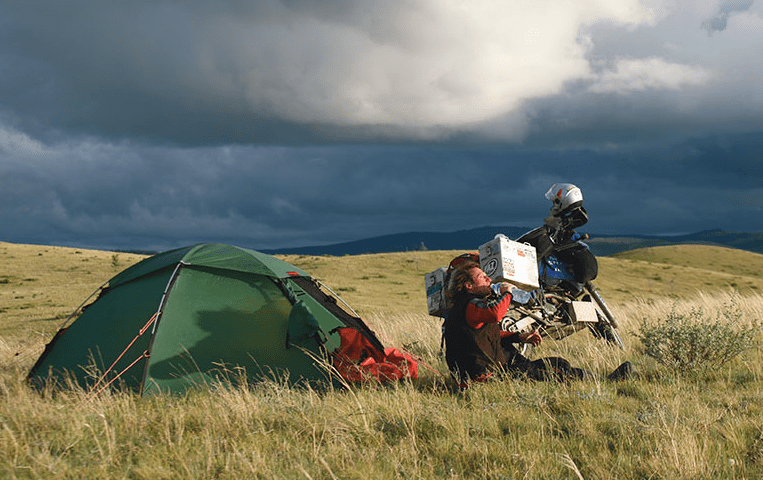 The fact the Staika retails for nearly a thousand dollars is not lost on me. It’s only after handling the tent, appreciating the detail of construction and the quality of the materials does the asking price seem reasonable. Every single attribute of the Staika is an example of Hilleberg’s no-compromise approach to design and manufacturing. Is it worth $985? Yes. Is it worth it to you, that is the question.

Crossing The Congo: Over Land And Water In A Hard Place
by Mike Martin, Chloe Baker, Charlie Hatch-Barnwell
From $29.95

Travel Tip: How to Maintain Your Zippers 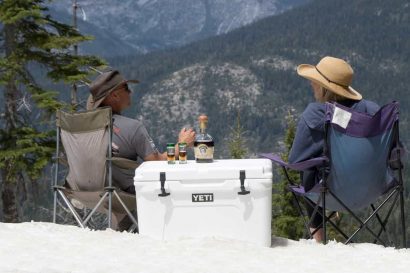 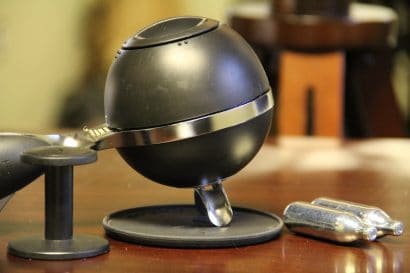 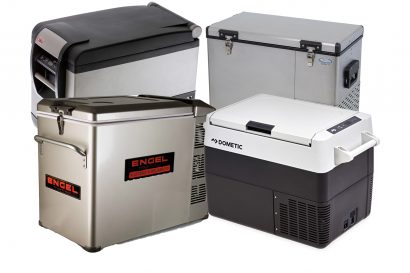