Garmin, a company that is synonymous with navigation, has been building GPS devices since the late 1980s. Their products, which run the gamut from smart watches to hand-held navigation devices, can be found in everything from airplanes to boats and even farm equipment.

One of their newest devices, the Tread XL Overland Edition, is 10-inch, rugged, all-terrain navigation system designed for vehicle-based adventurers. It’s packed with useful features, like on- and off-highway navigation, satellite communication, and route planning, to name a few. With this robust feature set and durable design, should you consider adding this Swiss Army knife of GPS devices to your overland kit? I took one into the field to find out.

The Tread XL is Built Like a Tank: Big and Tough

Upon unboxing the Tread, I was immediately struck by how large its screen was. I guess the name (XL) says it all. But seriously, it’s a monster, almost 2 inches larger than my Ram’s infotainment screen. And while this big display makes planning routes and navigating easy on the eyes, it takes up a massive amount of real estate above your vehicle’s dash.

With the Tread mounted via its included suction cup to my windshield, I felt uneasy driving on paved roads. It created a major blind spot, for instance, when looking toward the passenger side of my truck to determine if there was oncoming traffic. For those who will use the Tread XL regularly while on the pavement, I would highly recommend figuring out an alternative mounting method (ICS Fab, Bulletpoint Mounts, 67 Designs) to relocate the device out of your immediate field of vision. 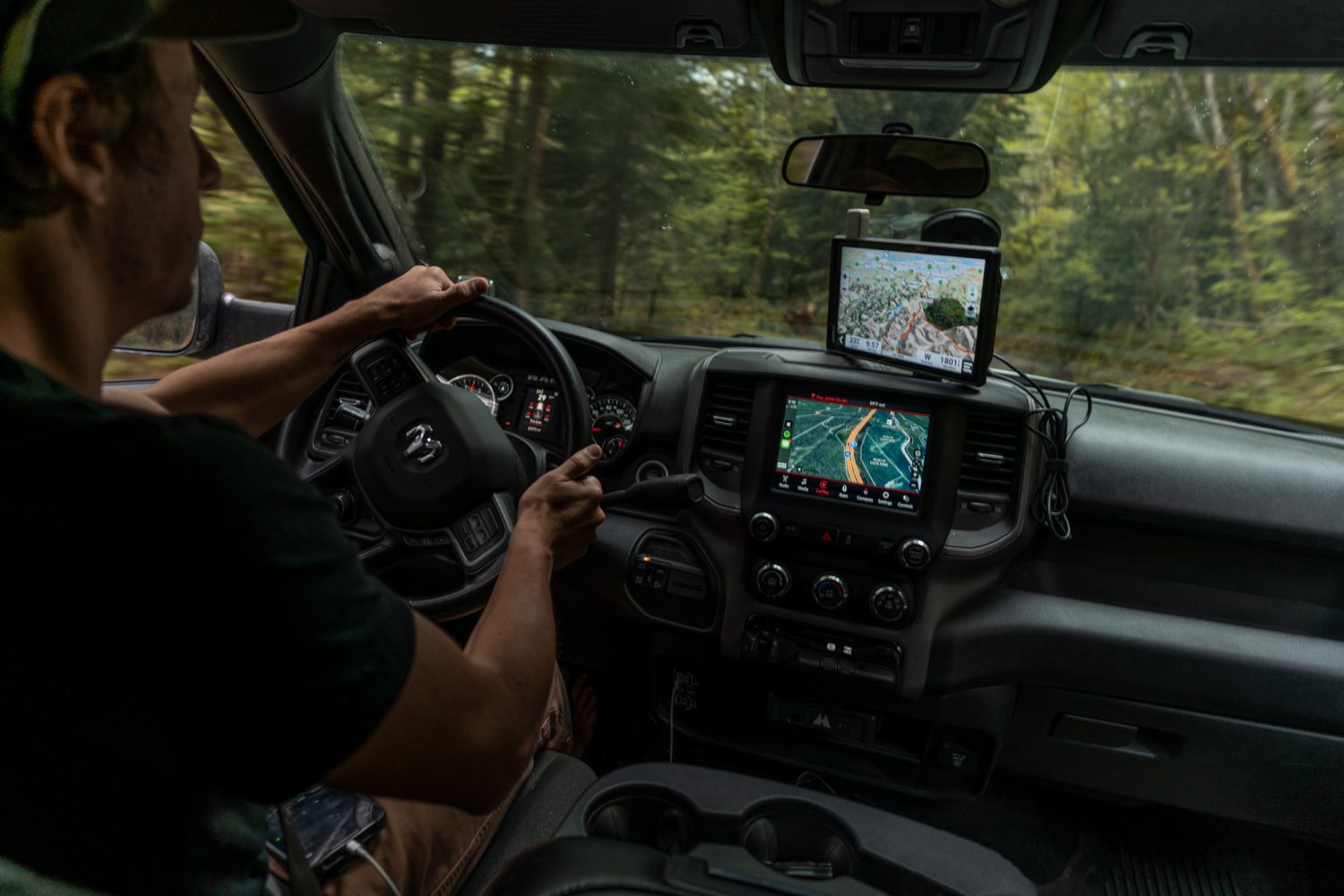 The Tread XL Overland Edition is roughly 1.5-inches larger than the 8.4-inch infotainment screen in my Ram 2500.

In addition to the oversized screen, many have been quick to similarly describe the Tread XL’s price tag. And rightly so; it costs $1,500. That’s almost $900 more than a 10.2-inch iPad with 256 gigabytes of memory, WiFi, and cellular. You can even get an iPad Pro with 512 gigabytes of storage and cellular for less. So yes, the price point is high, and for many, the versatility of running a tablet with a variety of mapping applications may feel like a better value.

Specific Features and In the Field Use

The Tread boasts some features that you won’t find in most tablets, like its quick-release magnetic mount, IPX7 waterproof rating, IP6X dust rating, MIL-STD-810 drop-rating, micro-SD card slot (accepts up to a 256-gig card), and InReach capability. The latter is Garmin’s satellite-based communication system which lets users share their (almost) real-time GPS location with friends and family via a personalized web page. InReach also allows users to send and receive SMS text messages as well as summon SAR/Medical evacuation in the event of an emergency. Note that InReach is not an exclusive feature to the Tread XL; stand-alone InReach devices are available and functionality on the Tread XL or other devices requires a monthly subscription.

To this point, if you are an existing InReach user (for instance, the Mini), you cannot simply use your Tread XL on the same account. You will need to create a separate InReach account for the Tread and pay an additional monthly service subscription fee (you cannot transfer service back and forth between two InReach devices on a single account).

When it’s time to make your plan and hit the trail, the Tread obliges with its route planner. To create a new route, select a few points on the map, and the Tread snaps a route to existing roads (paved or off-highway). While this feature works fairly well, driving the route introduces some challenges. For example, the Tread treats points along the route as mini destinations, so if you miss a turn or purposely veer off course, the Tread will keep trying to reroute you back through the specific point you selected on the map instead of updating your route to keep you on track to your final destination without any backtracking. The good news is that you can skip the missed waypoint manually on the device.

Another feature that could be extremely useful if it were more refined is the Tread’s list of campgrounds, which includes iOverlander and Ultimate Public Campgrounds data points. Unfortunately, this information (and associated details, like price, amenities, etc.) can only be browsed through the campgrounds screen (an alternate base map viewer on the Tread), which is clunky and difficult to navigate. Interestingly, the device will display these and other resources as icons on the main navigation screen (by toggling the campground layer). But in this view, you cannot click on the data points, meaning that you get no relevant information like campground cost, availability of diesel, potable or non-potable water, etc. This lack of data makes navigating to any of these icons feel more like playing roulette than directing your convoy to a surefire resupply or legal camping spot for the evening. 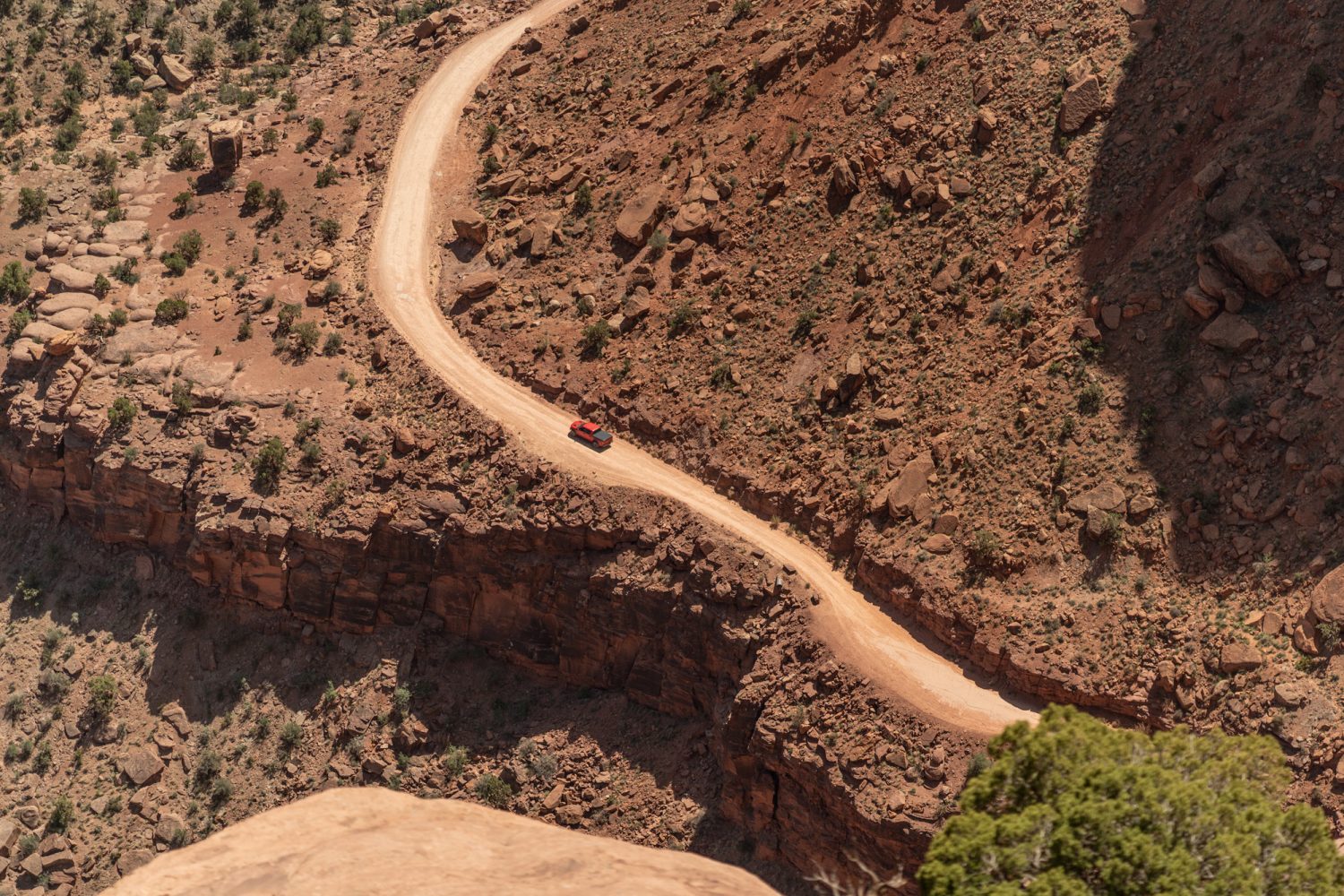 Other map layers include contour lines, public land boundaries, private parcels, travel history, 3D terrain, traffic, BirdsEye, and Adventure Roads and Trails. Of which, the latter two are specific to off-highway travel. BirdsEye is Garmin’s satellite imagery layer which can be downloaded as individual user-specified square areas prior to heading into the field (while connected to the internet via WiFi). Adventure Roads and Trails highlights color-coded routes that are suitable for all vehicles, off-road vehicles, vehicles that are 50-inches wide or less, motorcycles, and over-snow routes. However, I wouldn’t put your full faith in this particular feature as I could easily find a green route (suitable for all vehicles, according to their rating system) that required high clearance and 4WD. Who confirms these on the ground?

Let’s end on a positive note. My favorite functionality that the Tread offers, aside from general off-line base map navigation, is its reconfigurable data screen which displays a variety of information like pitch and roll, InReach messages, compass, barometer, altimeter, and real-time weather (if connected to the Tread app on your smartphone). Because my truck has very few of these features built into its infotainment system, this data is a welcomed addition, helping me make smart route choices while on the road or trail.

Should you buy a Tread XL Overland Edition?

Garmin is arguably the leader in the consumer GPS space, and because of that stature, I’ve been fairly critical in this review. Why? If you are asking a consumer to invest $1,500, I expect you to deliver a highly refined product. In this regard, I think that the Tread XL Overland Edition falls short. Sure, the device has a ton of features, but sadly, most feel like they need improvement. And many of the proprietary capabilities, like 12-volt accessory control, Group Ride, integrated Garmin radio, and the dog tracker, all require investments in additional hardware, quickly adding to the already spendy price tag.

The good news is that most of the shortcomings are user experience issues that can be improved via software updates. In the meantime, instead of seeing a huge feature list that feels poorly executed, I’d rather see a few key functions that all operate flawlessly. 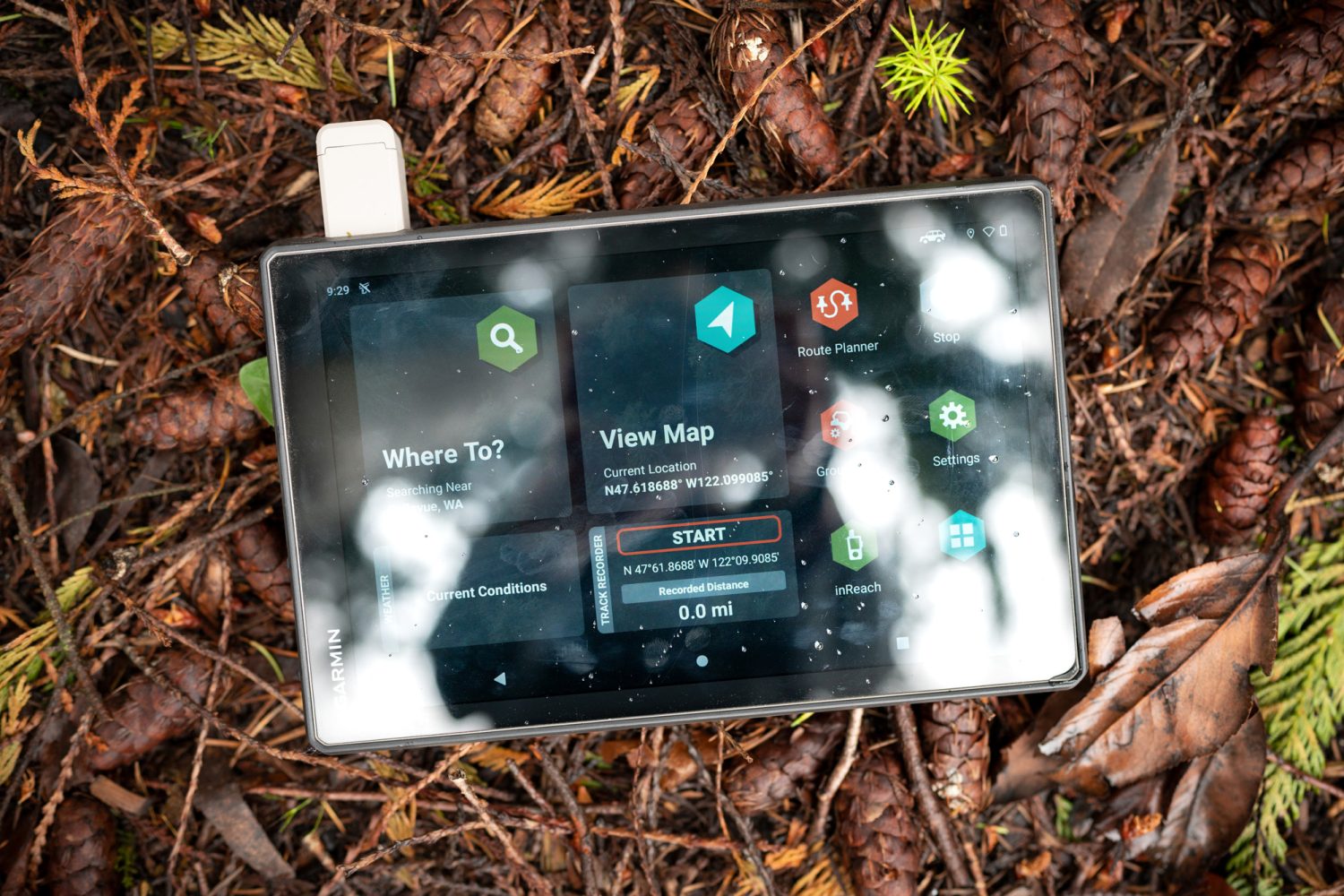 There’s room for improvement, but for the right customer, this still might be a good do-it-all navigation solution.

But this doesn’t mean that I don’t like the device. I think the Tread could make the right person happy. For instance, if your vehicle doesn’t have an infotainment system, the Tread could be a quick way to add a big bright display for navigating, displaying select data from your smartphone, tracking your trips, and giving you insights about your vehicle, the weather, and trail.

But for the majority of us that drive modern vehicles with integrated navigation systems and Carplay (or similar functionality), I don’t see the Tread solving any problems or delivering any added data that our current smartphones and associated navigation apps can’t provide for free. I will definitely continue bringing my Garmin GPS watch and InReach Mini into the field, but until a wide range of software improvements are made, I’ll likely leave the Tread behind.