“They’re a great alternative to dual batteries” Werner explained, “and they’ll keep a fridge running for days.” I’m sure I looked slightly strange at that moment, eyebrows raised with a mixed look of skepticism and surprise, but this is not what I had expected a representative of Flexopower to say. You see usually manufacturers are positive when presenting us with their products, but they are always careful not to promise too much. Werner on the other hand seemed very confident, and he further drove that point home by explaining how the Atacama 79 was virtually unbreakable, performed excellent in partial shading, and could still function after being shot with an AK47 and chewed on by a Crocodile. Now that”s a South African torture test! If this panel was half as good as he said I needed to try it, so we wired one into our 2000 Ford Excursion and set to work. 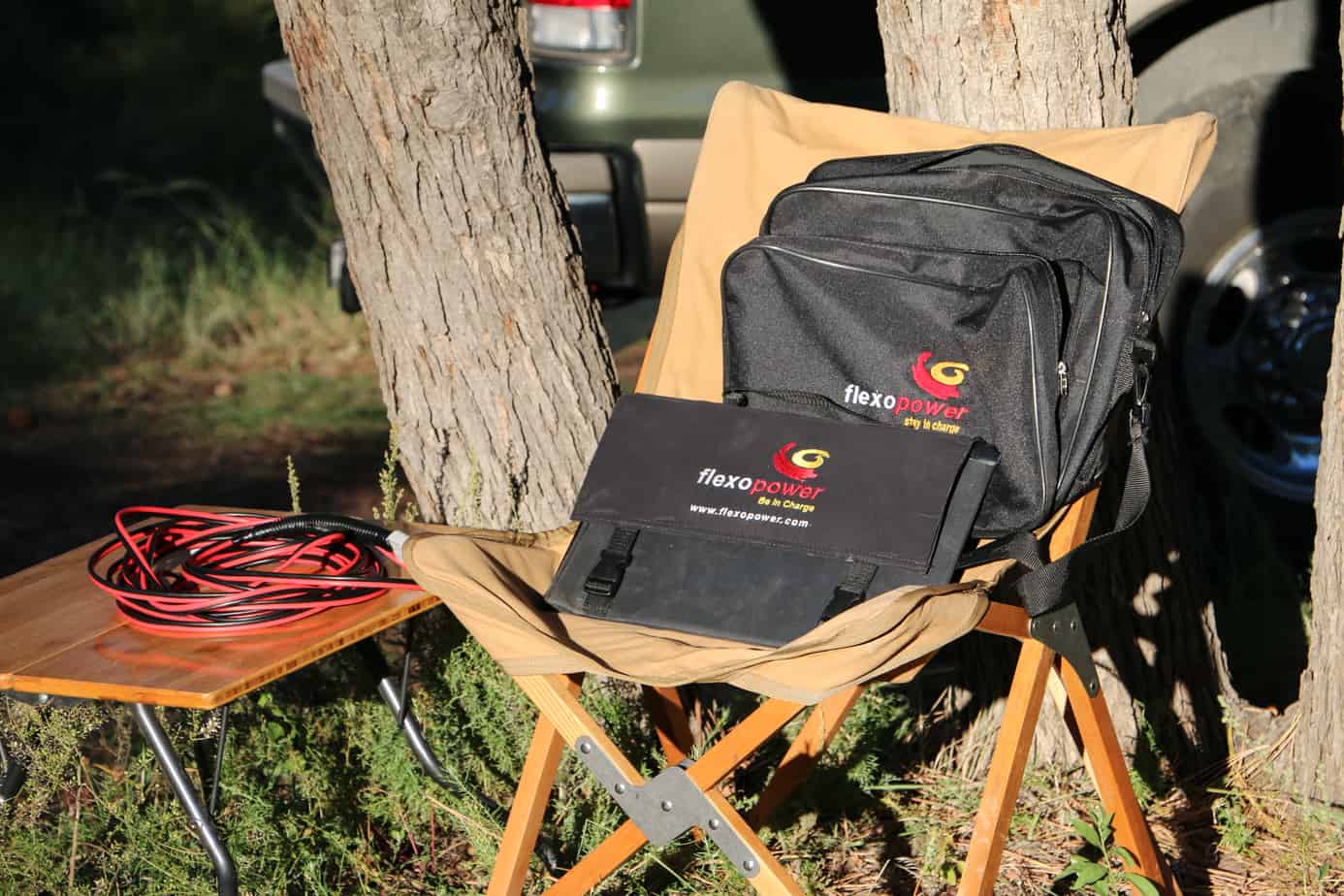 In order to ensure the most accurate test results and eliminate differences caused by aftermarket components and wiring, we opted for Flexopower’s ready to go complete camping kit, which includes the 79 Watt foldable panel, a solar regulator with LCD display, a carry bag, Anderson connectors, 33 feet of cable to run the panel away from the vehicle, and of course all the necessary connectors and hardware for installation. All of this will set you back $772.00 U.S., but you won’t have to purchase a thing after the fact. Tests were conducted in a variety of conditions including full sun, cloud cover, and partial shading, and in all situations the panel lay flat on the ground. The load placed on the vehicle was a National Luna 50L fridge/freezer which we opened multiple times a day, and stocked with a warm six pack of soda, cold meats and cheeses, and a gallon of warm sweet tea. To test the claim that this solar panel could replace a dual battery system, we used it on our stock Excursion which at this time is running on a factory spec battery system. 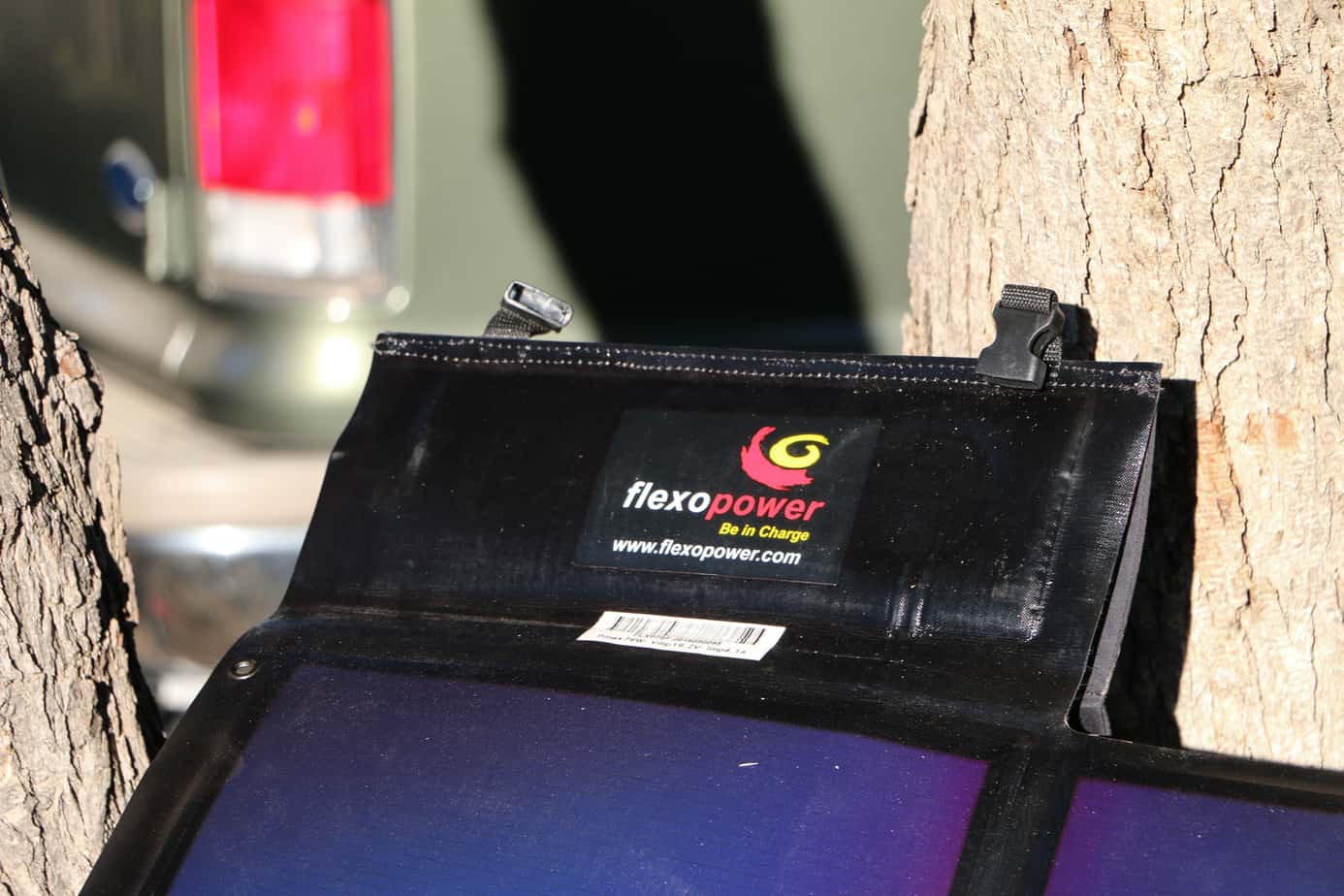 Upon removing the equipment from the bag the first thing I noticed was how robust the panel felt, despite weighing just 6.8 lbs. Unlike some of its competitors that use a light weight fabric on the seams, Flexopower uses an almost rubbery material which after being thrown in the dirt, slung over granite, and dropped in a puddle has shown no signs of wear. The heavier weight also eliminated the need to tie it down in most cases, so while the other panels in our test continually folded up on themselves, the Atacama kept pumping power to the battery. At 15.4″ x 10.4″ x 1.4″ folded, the panel packs easily into pretty much anywhere in the vehicle, and with a deployed footprint of 60.6″ x 30.6″ it fits windshields perfectly. All the supplied connectors and wiring felt sturdy as well, and I loved the regulator’s ability to display the panel’s output, your battery’s status, and the current load on the system at any time. Despite being perfectly functional, I did feel that the LCD screen felt and looked a little cheaper than I would have liked. Yes it’s a superficial complaint, but I’m not thrilled about a silver box being slapped onto the interior of my vehicle. 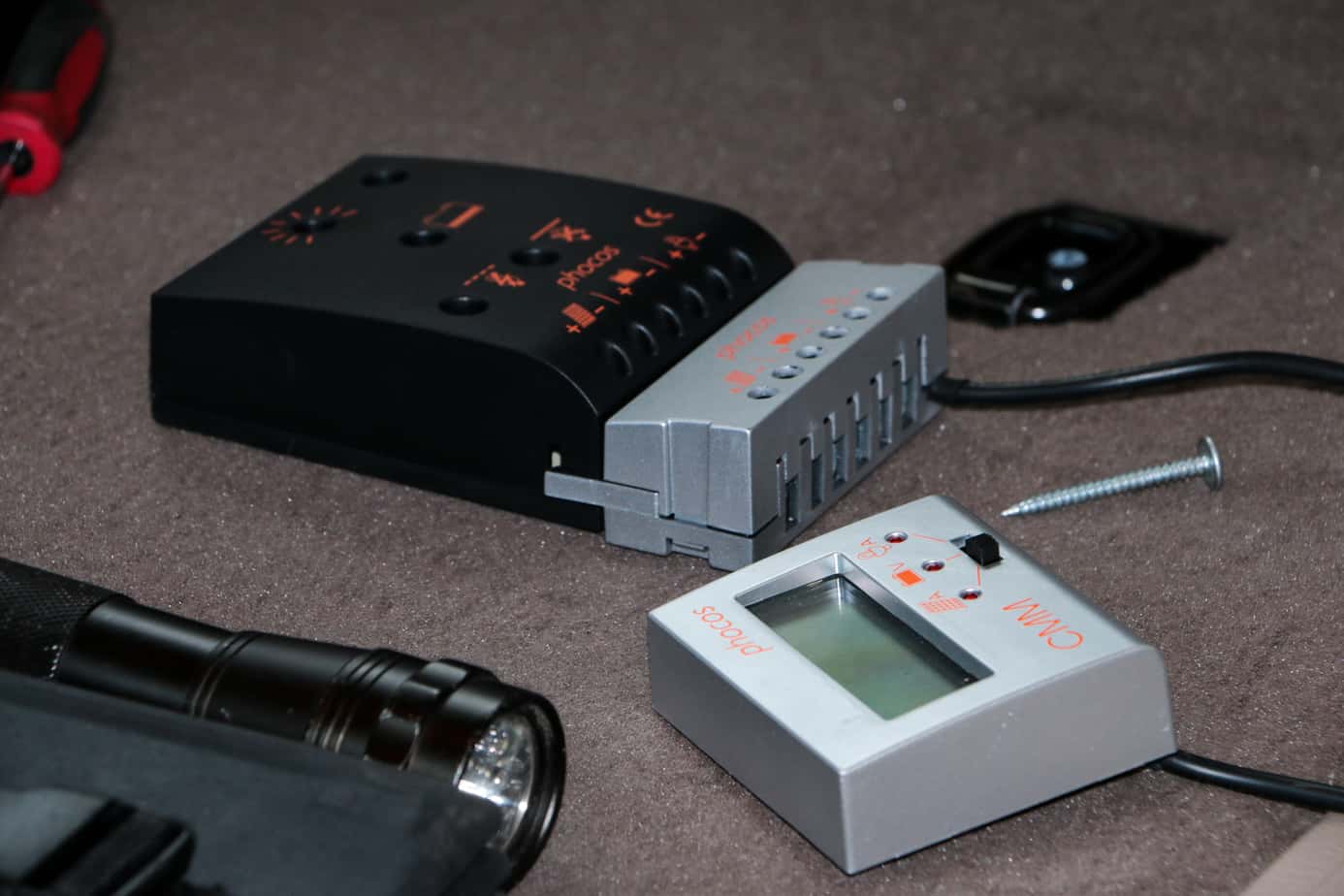 I usually find that the installation process can tell you a lot about how well a product was designed and produced. If things fit properly and come together easily, chances are that the engineers did their homework. If nothing works and the instructions are convoluted, well… not so lucky. Fortunately for Flexopower, their complete camping package made great marks for ease of assembly and ingenuity in layout. Instead of following the traditional system in which the panel is run to the battery before the fridge pulls from it, they ran the panel and the fridge to the controller first and then to the battery. This allows the fridge to receive power directly without the loss associated with conversion in the battery. Once the designated load has been met, usually around 2.2 amps on our national luna, the excess energy begins to funnel back to charge the system. This method not only powers the fridge longer, but improves battery life by greatly reducing the cycles incurred through constantly charging and discharging. 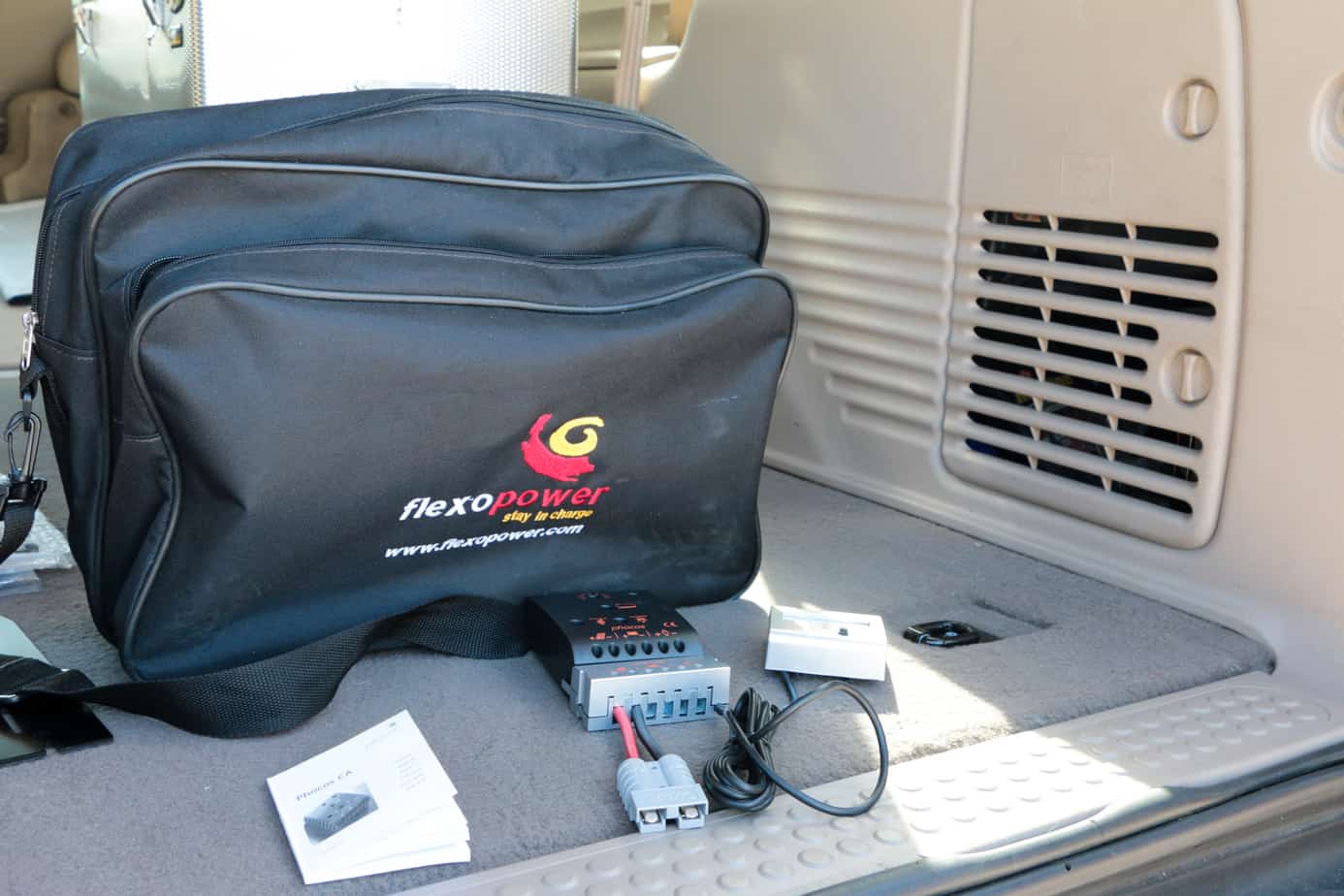 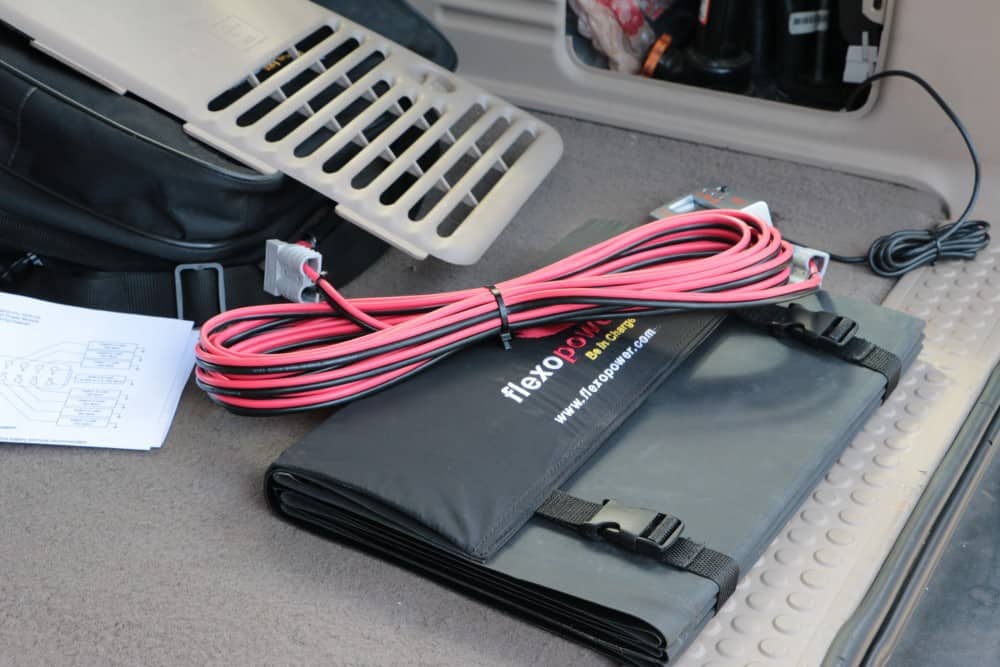 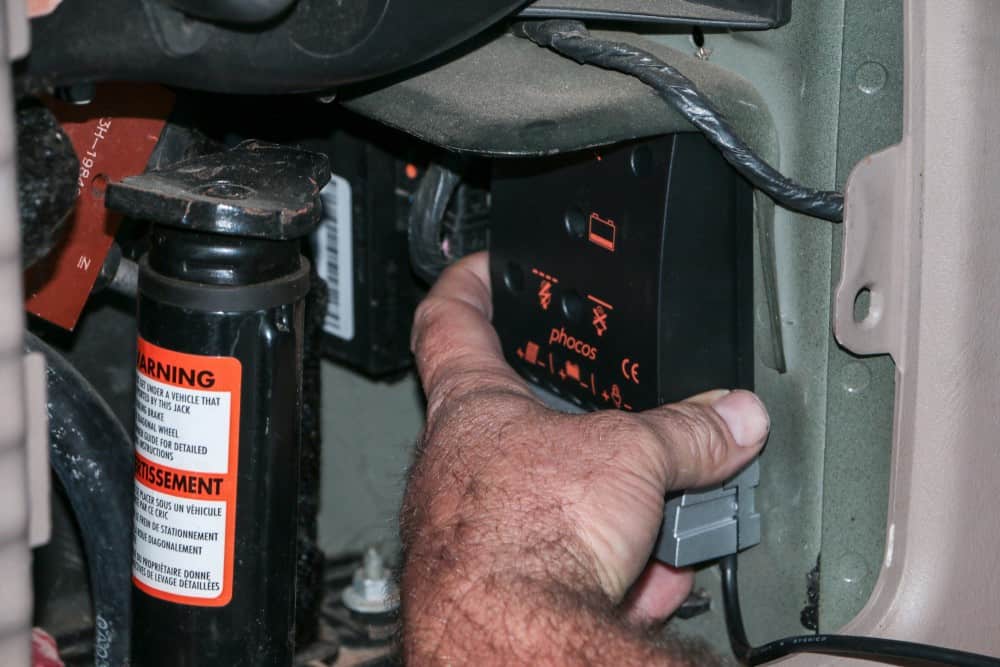 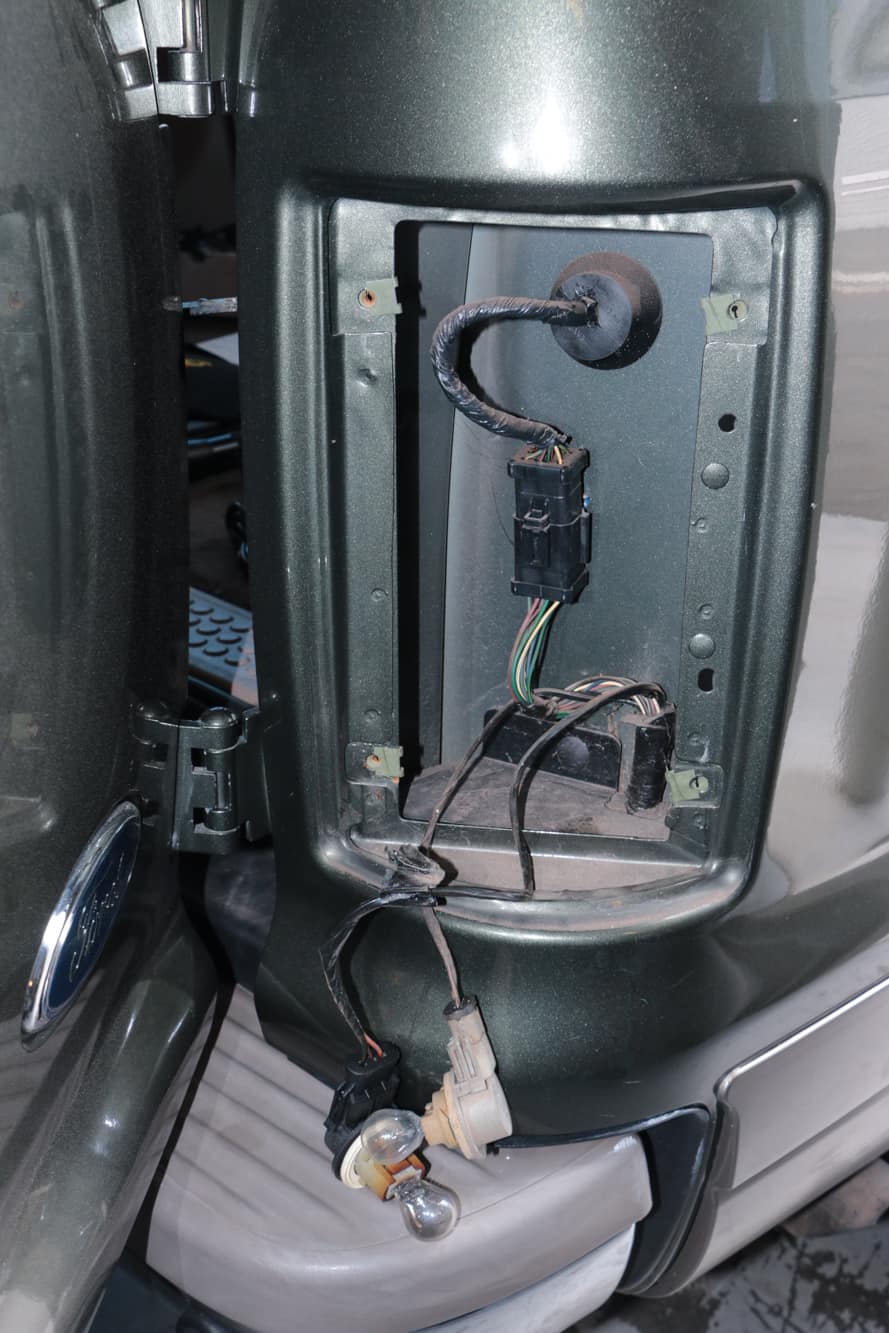 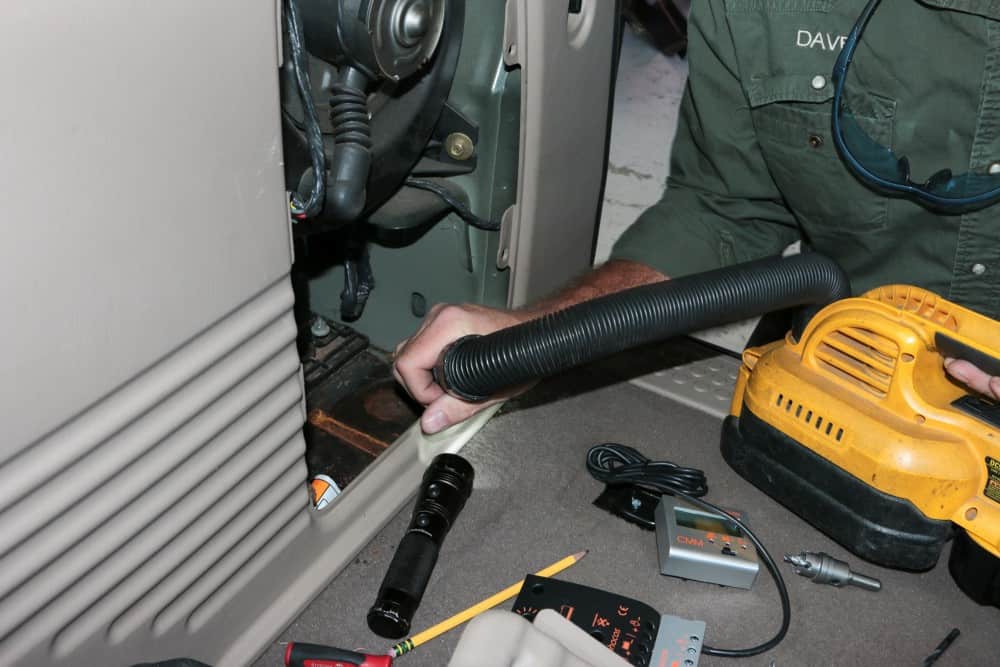 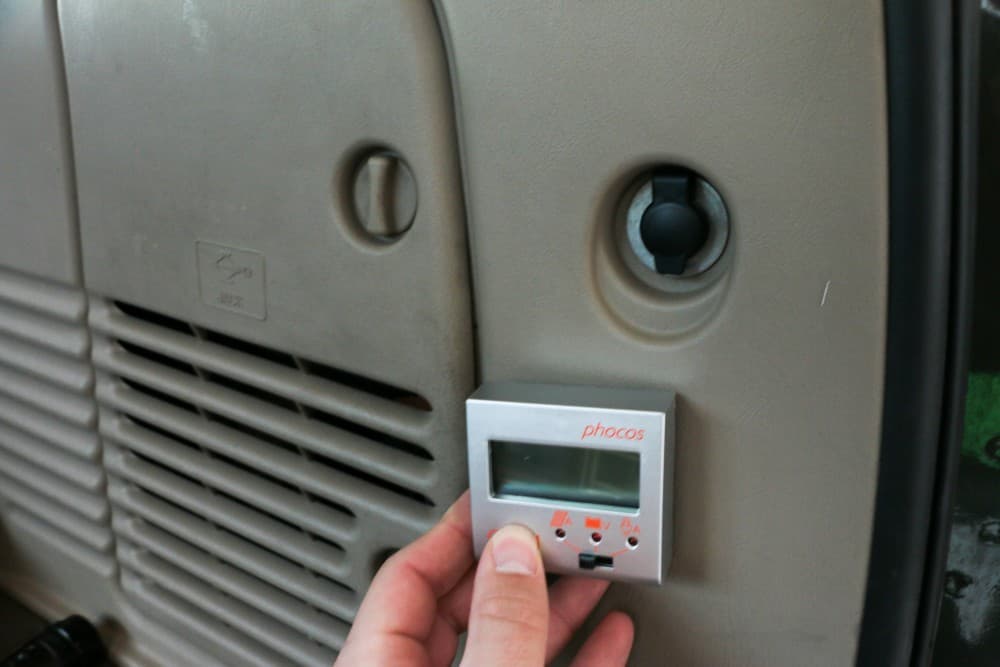 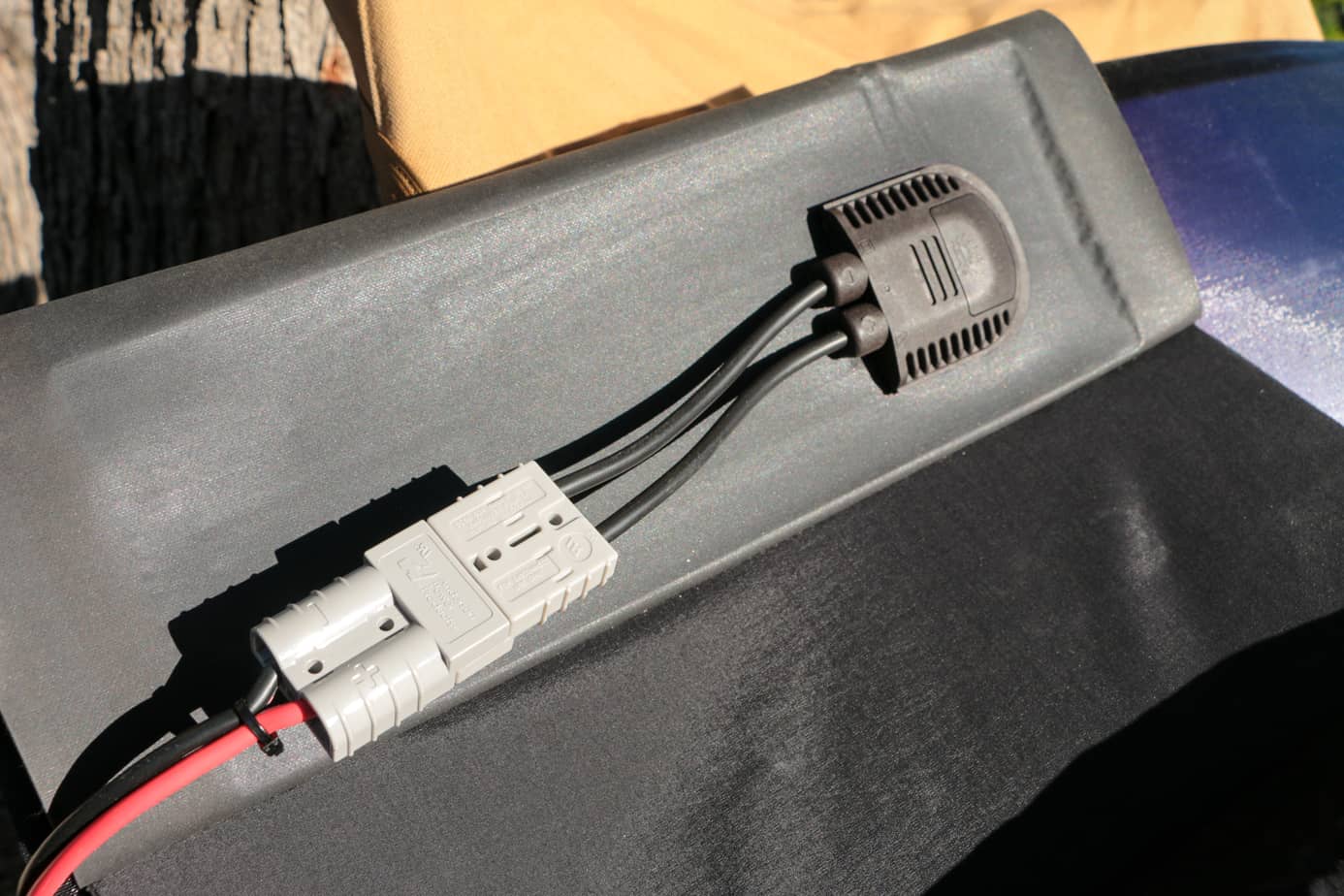 From the diagrams and parts provided the wiring looked to be well within my basic skills range, but for the sake of accuracy when testing I turned to the experts at AT Overland for installation. The hardest part of this system is determining where you are going to mount the components. We eventually decided to slip the regulator in behind the stock jack, and then temporarily mount the LCD screen on the back panel until the full storage system is installed. After wiring it to the battery we ran the anderson plug through an access hole behind the tail light and down onto the bottom of the bumper. This kept the power point as close as possible to the fridge and kept everything neat and out of sight. Once the process got started it went quickly and the crew from AT didn’t run into any strange issues or difficulties along the way. The only thing I felt was a problem was the lack of weatherproofing on the regulator. The instructions say it needs to be mounted close to the battery, however it also says it cannot be exposed to heat or water which means the engine bay is out.. Sadly that is usually the preferred location in most vehicles. 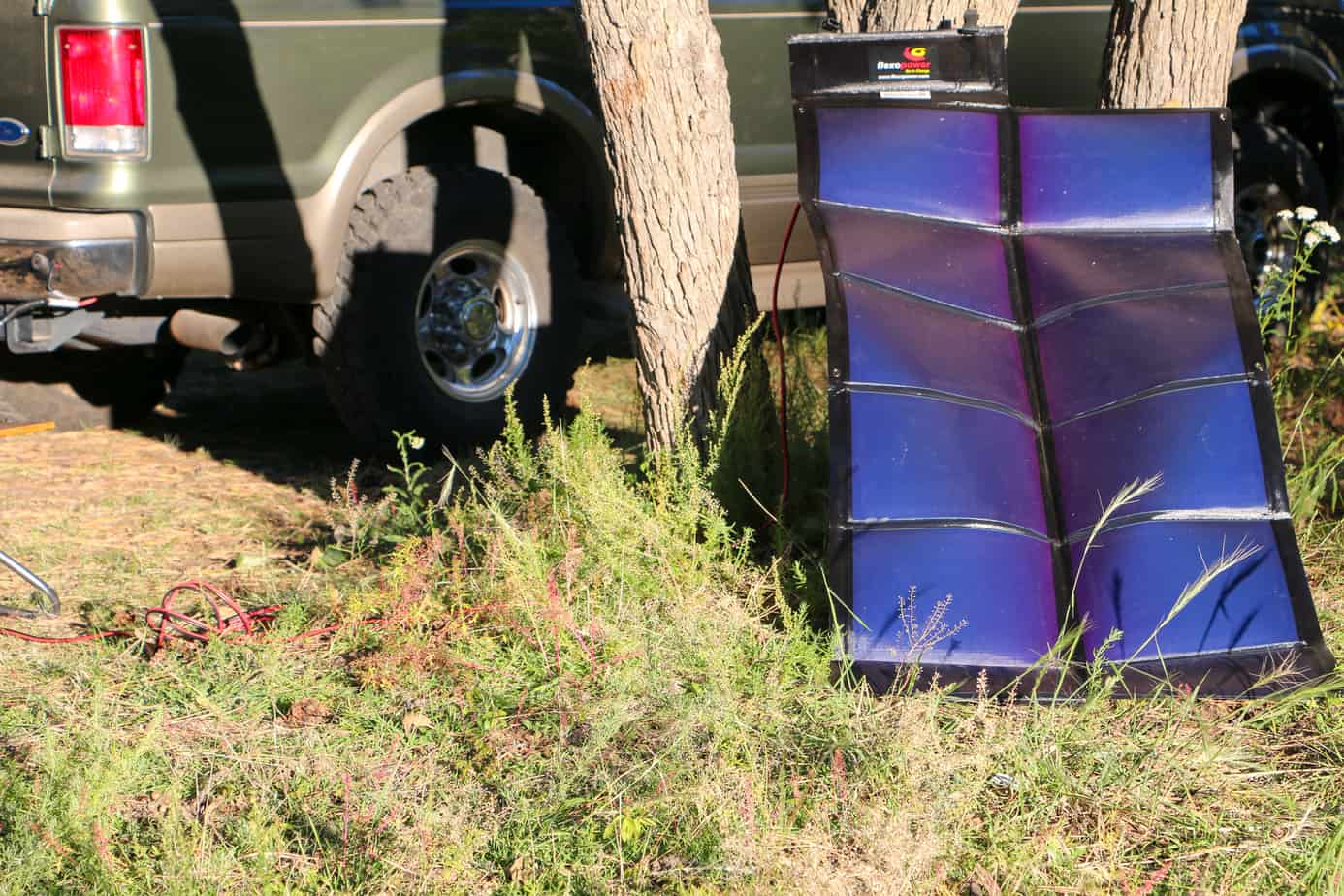 I started this evaluation by simply using the panel on weekend trips, but it didn’t take long for me to realize that intermittent stops weren’t a big enough challenge for the Atacama, so we switched things up a bit. We decided to park the truck for at least two days and use the fridge for all of our food, drinks, and ice like we would on extended camping trips. Since we didn’t know how the panel’s output combined with our stock battery system would hold up, we decided to complete this portion at our house and not chance having to walk home

. On the first day the panel had a rough start, as the weather was basically crap. Clouds were rolling in throughout the morning, and by mid day a thick haze settled in that stuck around until sun down. It was far from ideal conditions, but it gave us a realistic picture of how this setup handles the real world. Even with the overcast skies the panel still managed to pull 1.2 amps, so by the end of day one the battery system had dropped from 12.9 to 12.5 volts. 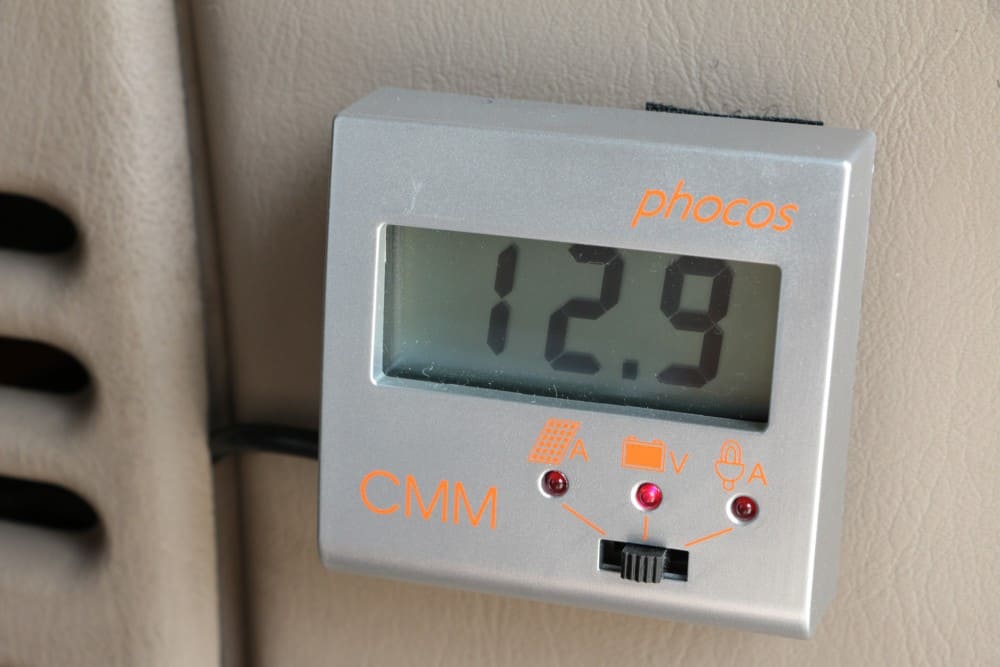 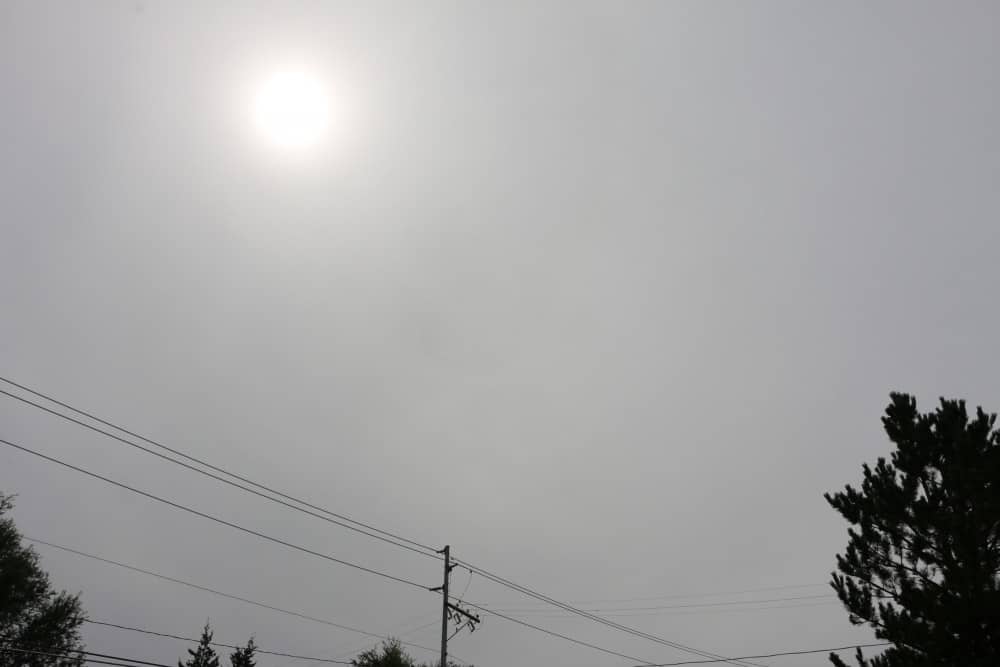 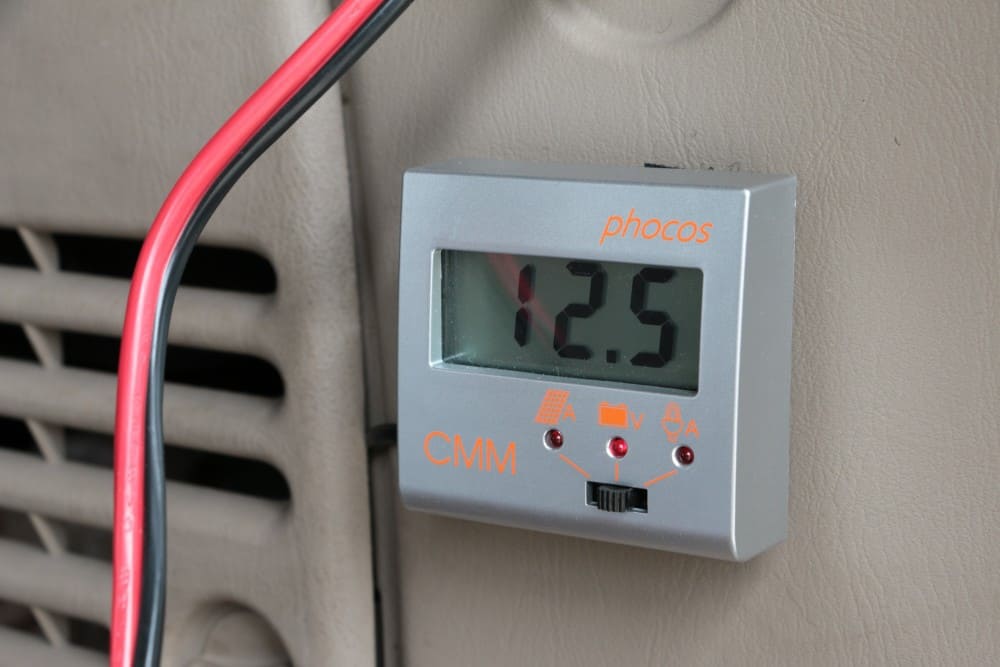 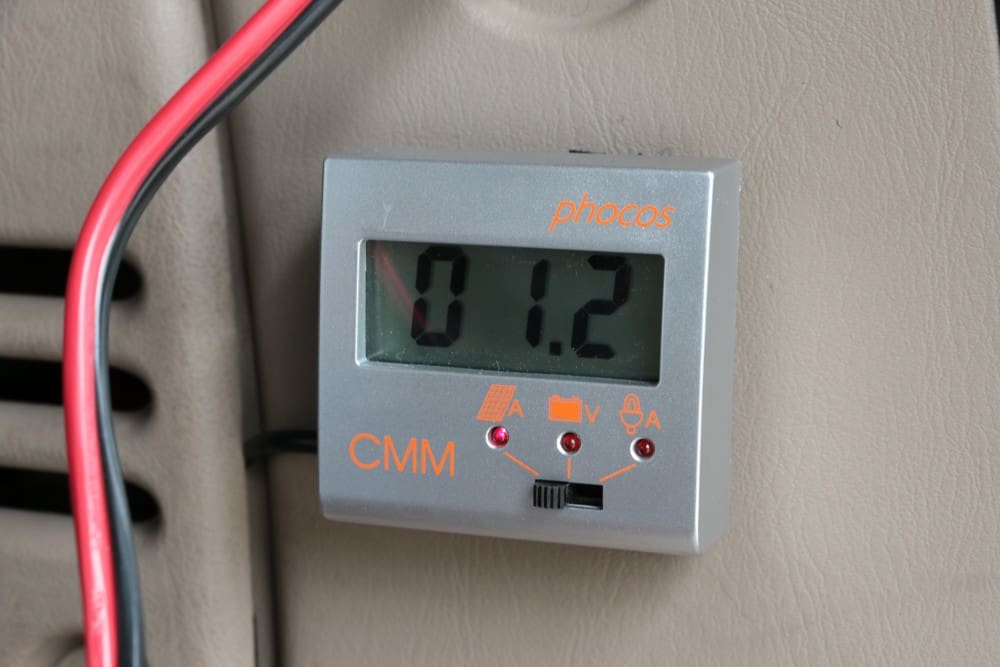 The second day of the test brought better weather with blue skies and scattered clouds. To my great satisfaction it also brought the battery back up to 12.7 volts by 0930, and the panel was pulling in around 4 amps consistently. By mid day the incoming amps were jumping between 4.4 and 5.0, and the battery had actually come up to a full 13 Volts, which is higher than when we had started. By the third morning the battery was back at 12.9 and rising, meaning that the panel had done more than just meet its claim of running a fridge for two days, but showed it could run one indefinitely with fair weather. 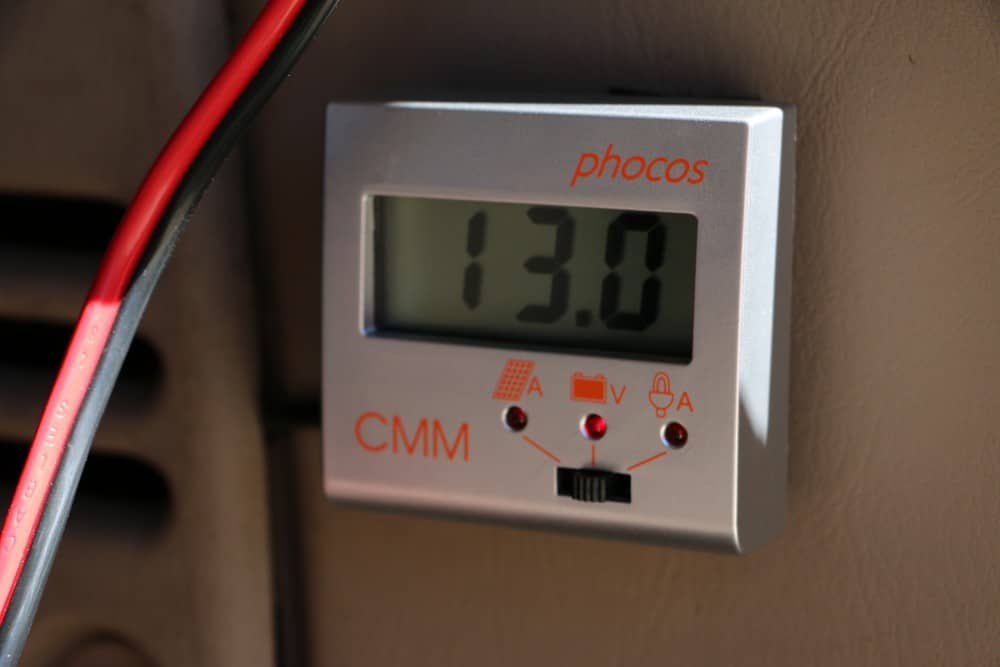 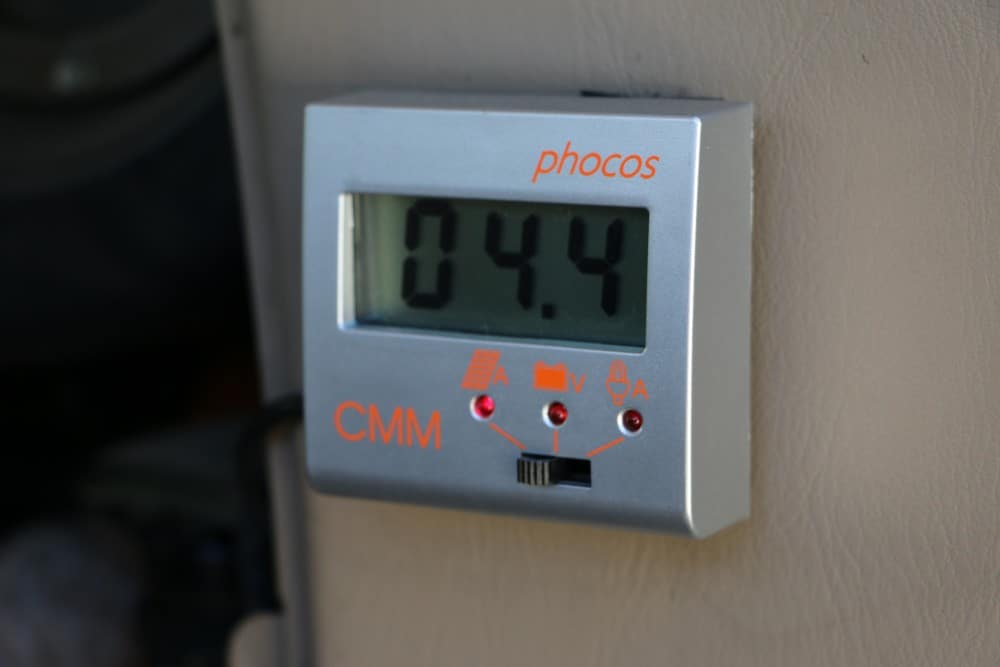 So far this was all great news for Flexopower, but their brochure had made a few more claims that we were eager to test. Among them, that their panels were up to 15% more productive than goal zero’s, had better performance in partial shading, and were better at angles of incidence.  Fortunately for us, we knew some people with various solar panels hanging about, so we brought them in and started to compare.

I wanted to tackle the 15% claim first, but sadly out of the squillion proprietary connections our company hordes for those products, not a one had the ability to hook into something that would allow us to measure their output. This was extremely disappointing, as it meant all the Goal Zero tests could not be conducted. Fortunately AT Overland found another set of glass panels in the back, and so we switched to testing partial shading on those. 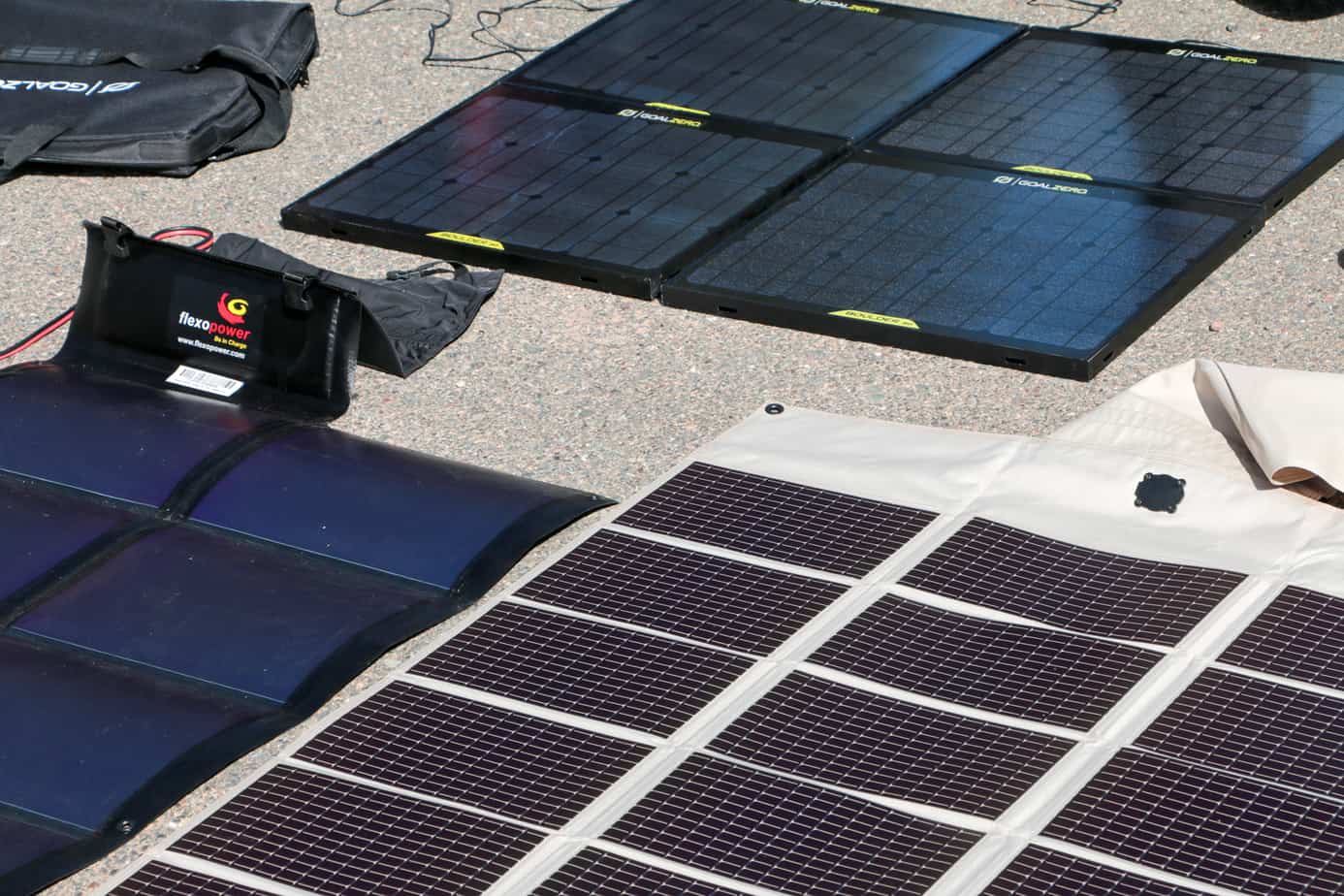 The core principle that Flexopower claims sets their panels apart in shade is their series rather than parallel wiring between soar cells. Think of them like Christmas lights, if you shade or damage one cell at the top of a row, all the cells after it fail to work or are significantly hindered. We decided to test this using a piece of cardboard to block out various sections. While it wont be as realistic as shade from a tree, it’s more controllable. Regardless of where we placed the square on the Atacama there was a consistent drop of .2 -.3 amps, a good representation of the square footage we blocked off. On the second folding panel you see above, the drop was between .3 and 1.0 amps depending on placement., meaning it was still good but less adept at handling partial shading. Finally we threw the cardboard onto the glass panels, and the results were devastating, up to an 80% loss of power. Now we should mention that none of these panels were the same size of wattage, but that just makes the Atacama’s performance even more impressive. It had the least surface area of the group meaning the cardboard covered a larger percentage of its total space, and it was rated 16 to 40 watts lower than its competitors, yet delivered equal or more power. 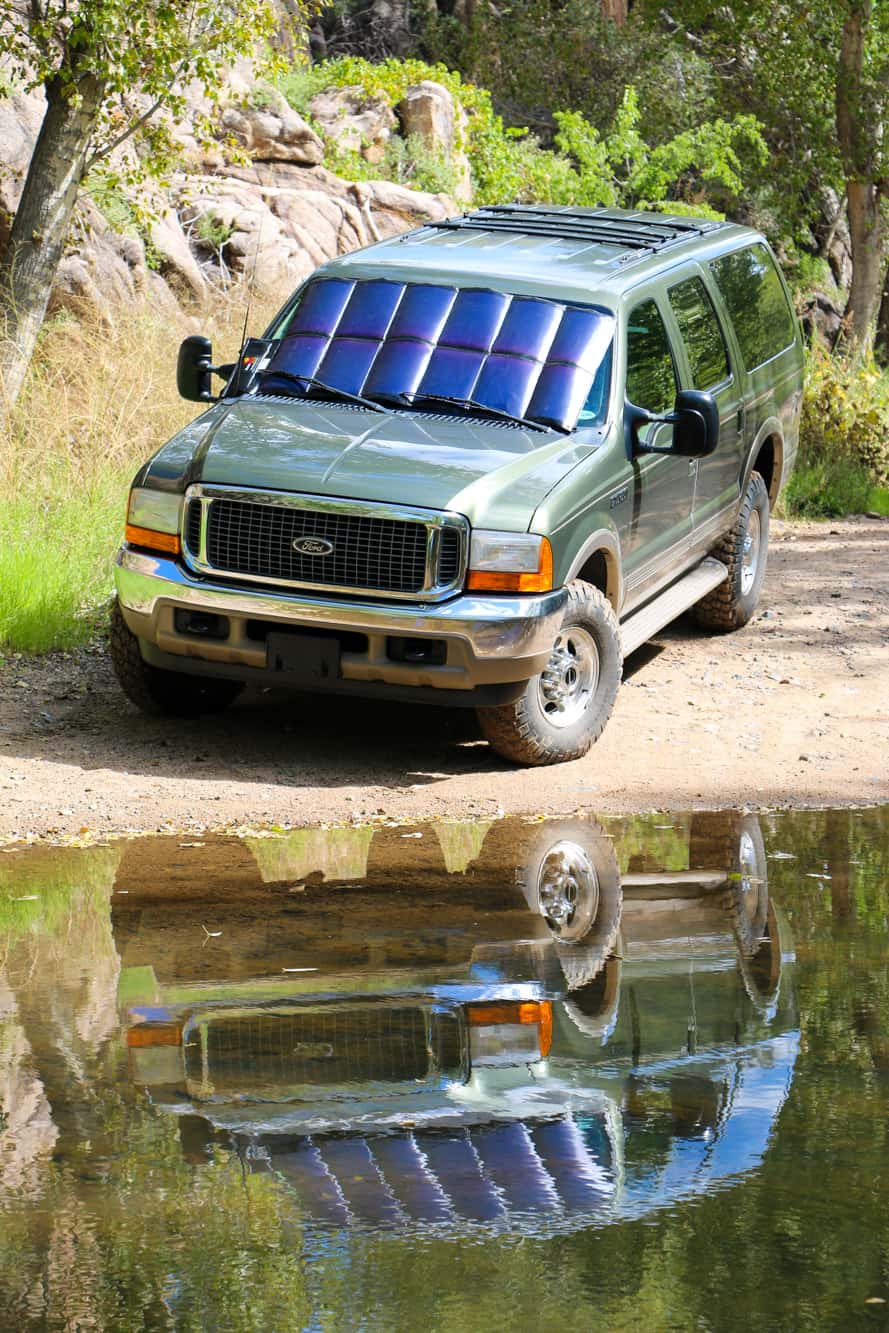 During our time with this panel we folded it repeatedly, tossed it on rocks and dirt, let it get wet, and dropped it from the back of the Excursion, but we didn’t feel there was much point in going past that, as we could never match what Flexopower had already done. They started by running one over with two cars, then a bulldozer, shot it with an AK47, and then threw it to a crocodile to chew on before taking readings. I encourage you to check out the video, but if you simply don’t have the time, the panel still produced 90% of its rated output after incurring all this damage. The carnage begins three minutes in.

By the end of our test I understood why Werner was so confident during our first meeting. Not only did their panel come in cheaper than many name brand competitors, but it outperformed them even when going up against higher output versions.  While it’s not perfect, it delivered on every promise that Flexopower made, and that’s a rare achievement these days. Whether or not this panel is the right fit for you I cannot say, but it will be  an integral part of our Excursion build, and my alternative of choice to installing an auxiliary battery in any future vehicles.

For more details, check out the Flexopower Atacama 79 spec sheet here, or visit the company website to see other options here.

And Here it Is: Land Rover's Latest Discovery 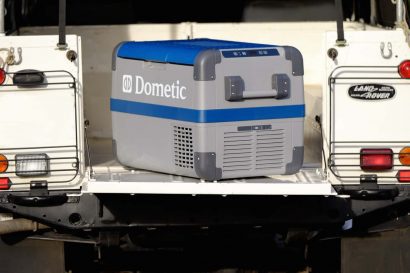 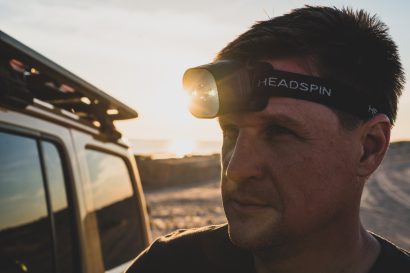 One Headlamp to Rule Them All? 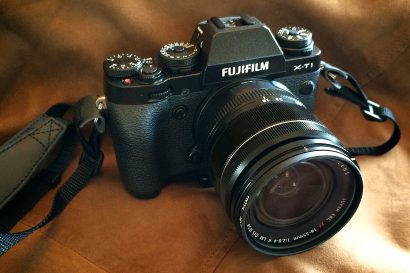