Whenever I’m lucky enough to spend time with experienced overlanders, I try to glean some knowledge from their travels. I’ve heard tips on packing, tricks to help win favor with border agents, and even recommendations on a leather hat selection for repairing engine gaskets, but there’s one piece of advice that seems to be universal, “Don’t drive at night.” Unfortunately, this is one of those rules that we all tend to break. Whether you’re making a late night move to higher ground as a storm rolls in, searching for your buddy’s campsite down some dirt road, or just laying down miles before morning, having good visibility is imperative to staying safe, and that’s where auxiliary lighting comes in. We’ve tested plenty of options over the years, from enormous filament bulb rounds to low profile LED bars, but this week we’re looking at one of the latest offerings from Baja Designs, a versatile LED combo light called the LP6 Pro. 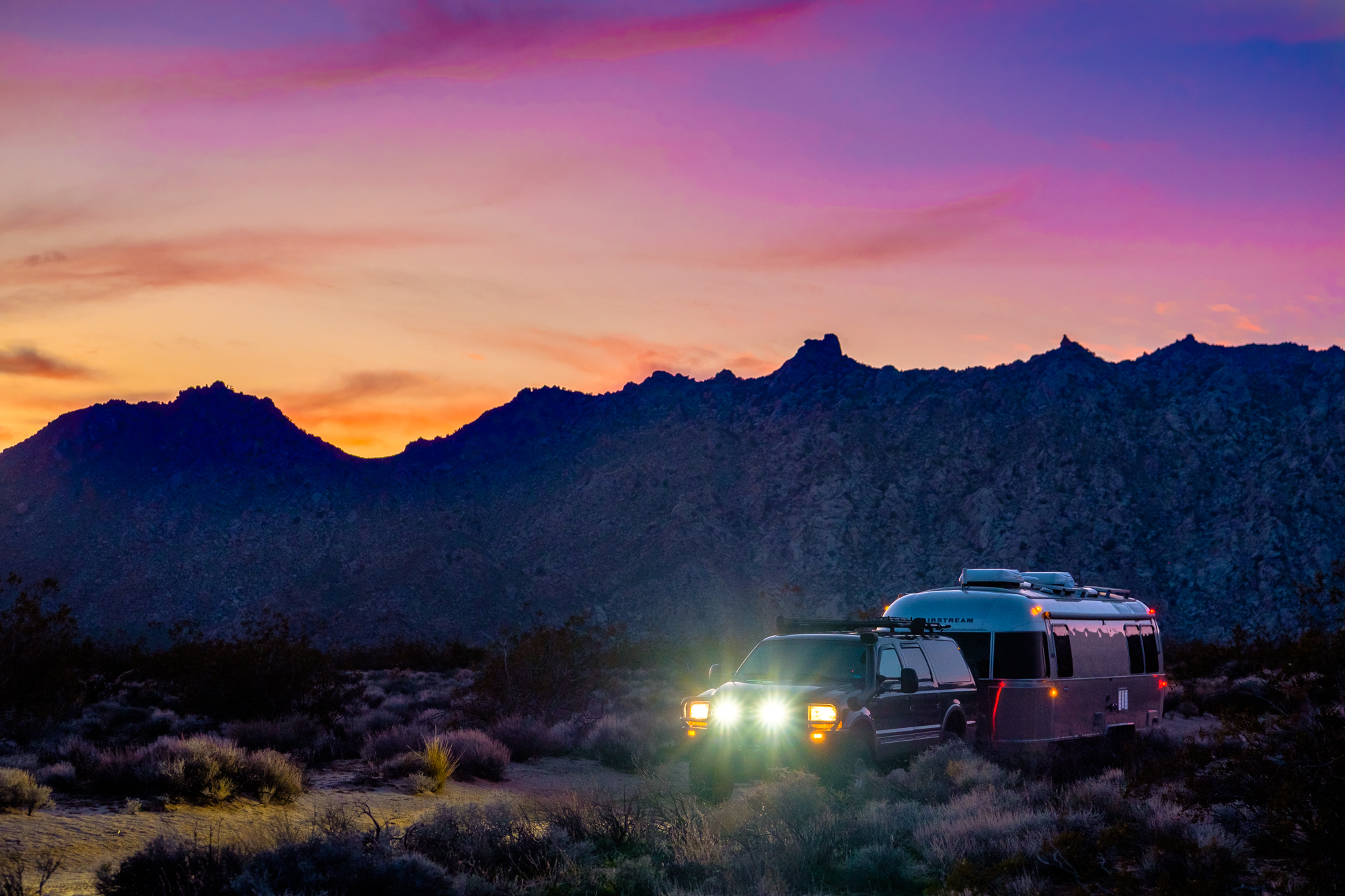 The LP6 is the smaller cousin to Baja Design’s LP9 but hails from the same ideology of throwing big lumens down range while casting a wide spread of useable light to the sides. Each light will pump out 8,600 lumens from six forward facing LEDs, with an additional 1,700 lumens via four side facing LED’s integrated into their patented Integrated Peripheral Technology (IPT). Amber LED backlighting gives the LP6 a dual purpose as a daytime running light, while also providing a nice aesthetic to the vehicle. Both a driving/combo and spot variant are offered in white or amber, so you can mix and match for your ideal color and beam pattern.

We found that the LP6 performs flawlessly in the field, providing a wider breadth of visibility in a range of situations. It looks fantastic, is built like a tank, and includes plenty of features you’ll love. You will absolutely want to buy these lights, but with a price tag of $485 a piece, plus a $95 wiring harness, you might not want to pay for them. Don’t worry though, they’re absolutely worth it. 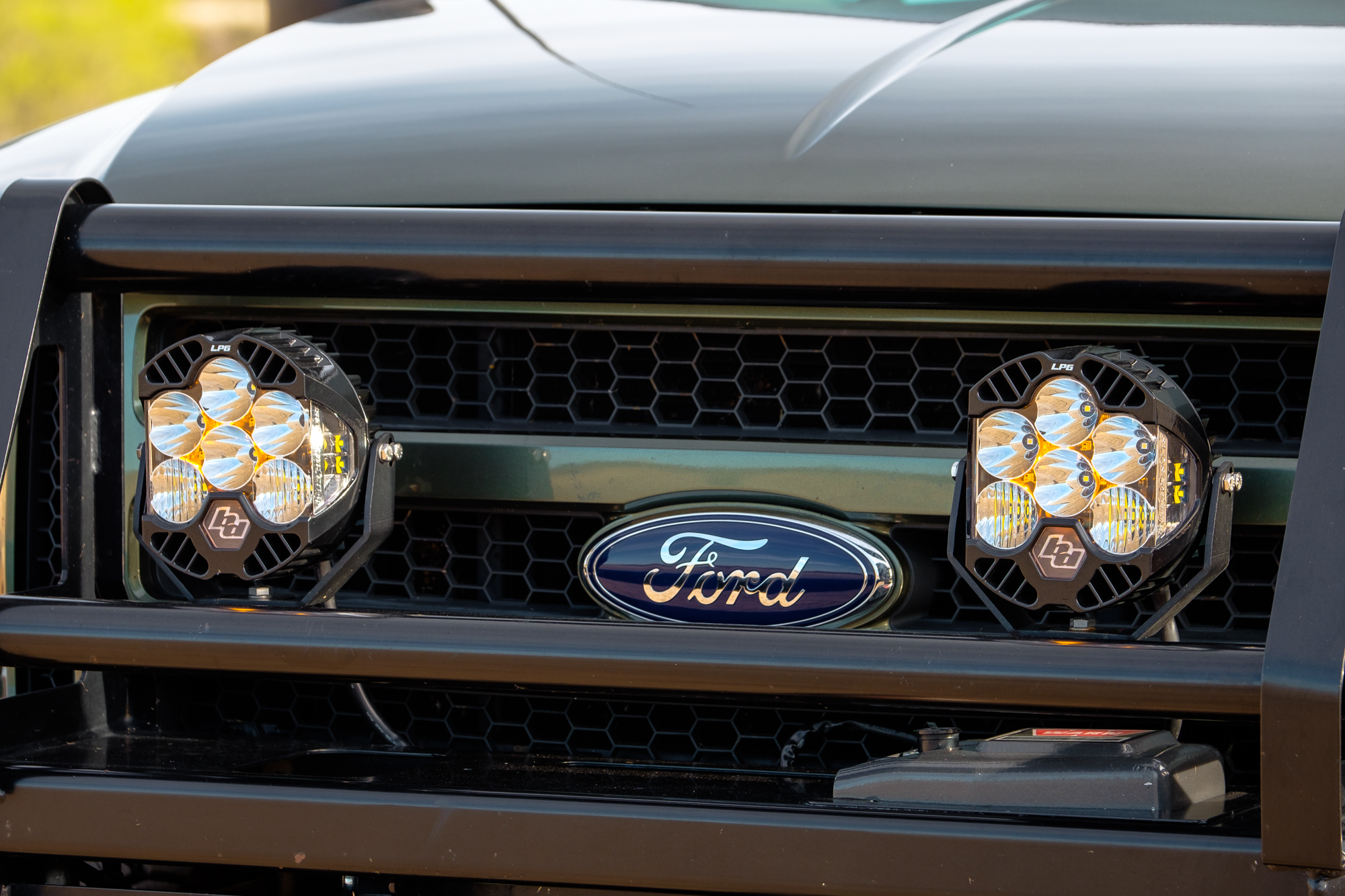 When most people first look at aftermarket lights, they get caught in the trap of simply counting lumens. After all, logic dictates that the brightest light would also be the best right, but the truth is that lumens are only part of the picture. If you’re going to choose the best product for your needs, you must also consider beam pattern, color, durability, and features; this is a balancing act that Baja Designs knows well, and their LP6 nails. 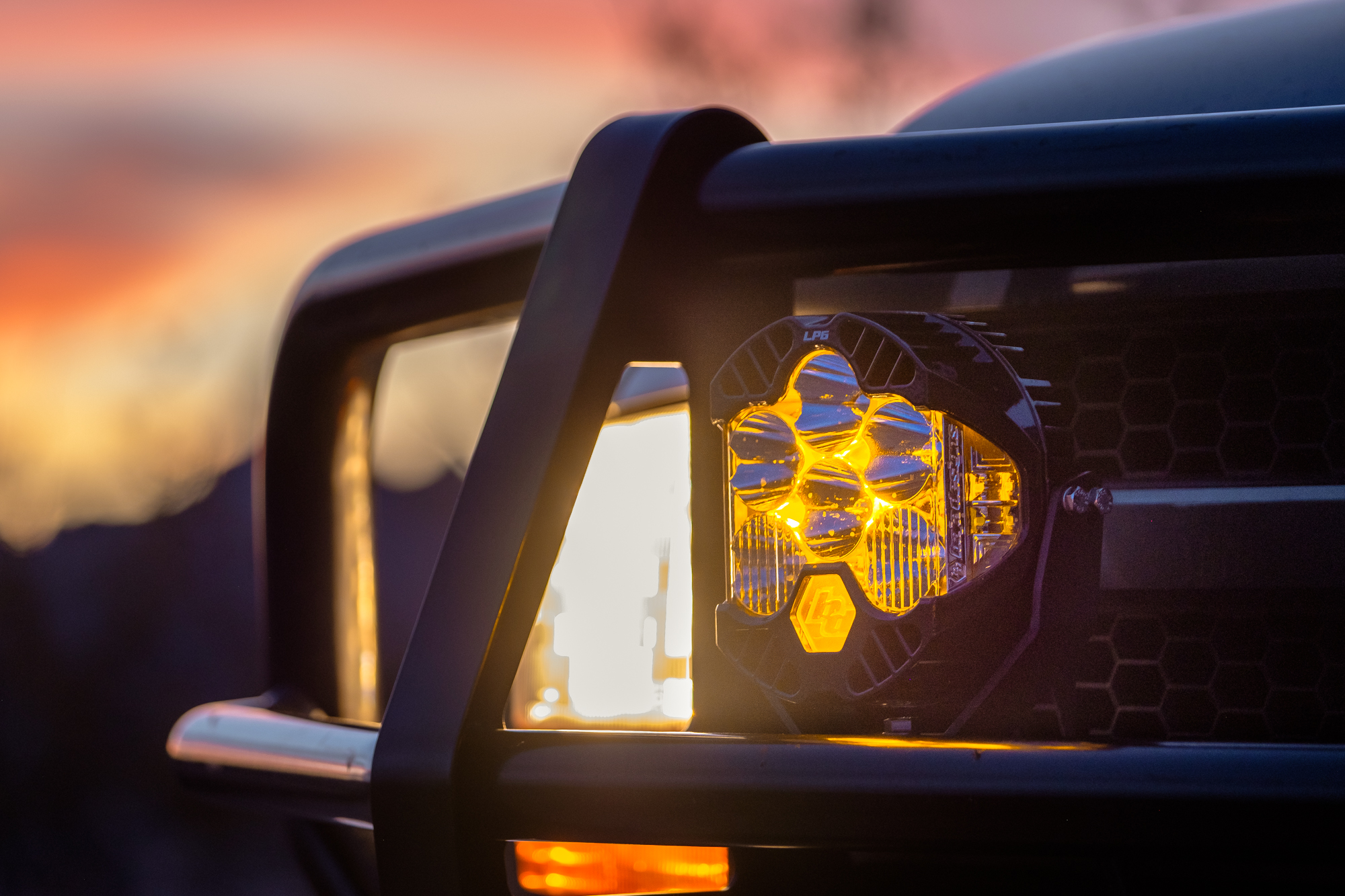 Now I’ll be honest, the first reason most people check out the LP6 is probably going to be for their looks, and I can’t blame them. The gloss black anodized machined aluminum housing and billet aluminum bezel curve and cut their way around six LED lights in a manner that would look perfectly at home in any sci-fi flick. Adding to this otherworldly effect is an amber glow emanating from the LP6’s daytime running lights, which besides increasing your vehicle’s road presence, is a pretty neat party trick to make your trail buddies jealous. Then there’s the finishing touch, Baja Design’s Direct Ducted Cooling (DDC) vents. These are sculpted like air intakes on a jet to maximize the light’s performance by funneling air through the front of the housing and over the rear heat sinks, thus reducing operating temperatures and allowing the LEDs to operate consistently at 100-percent power, a feat few other lights can claim. 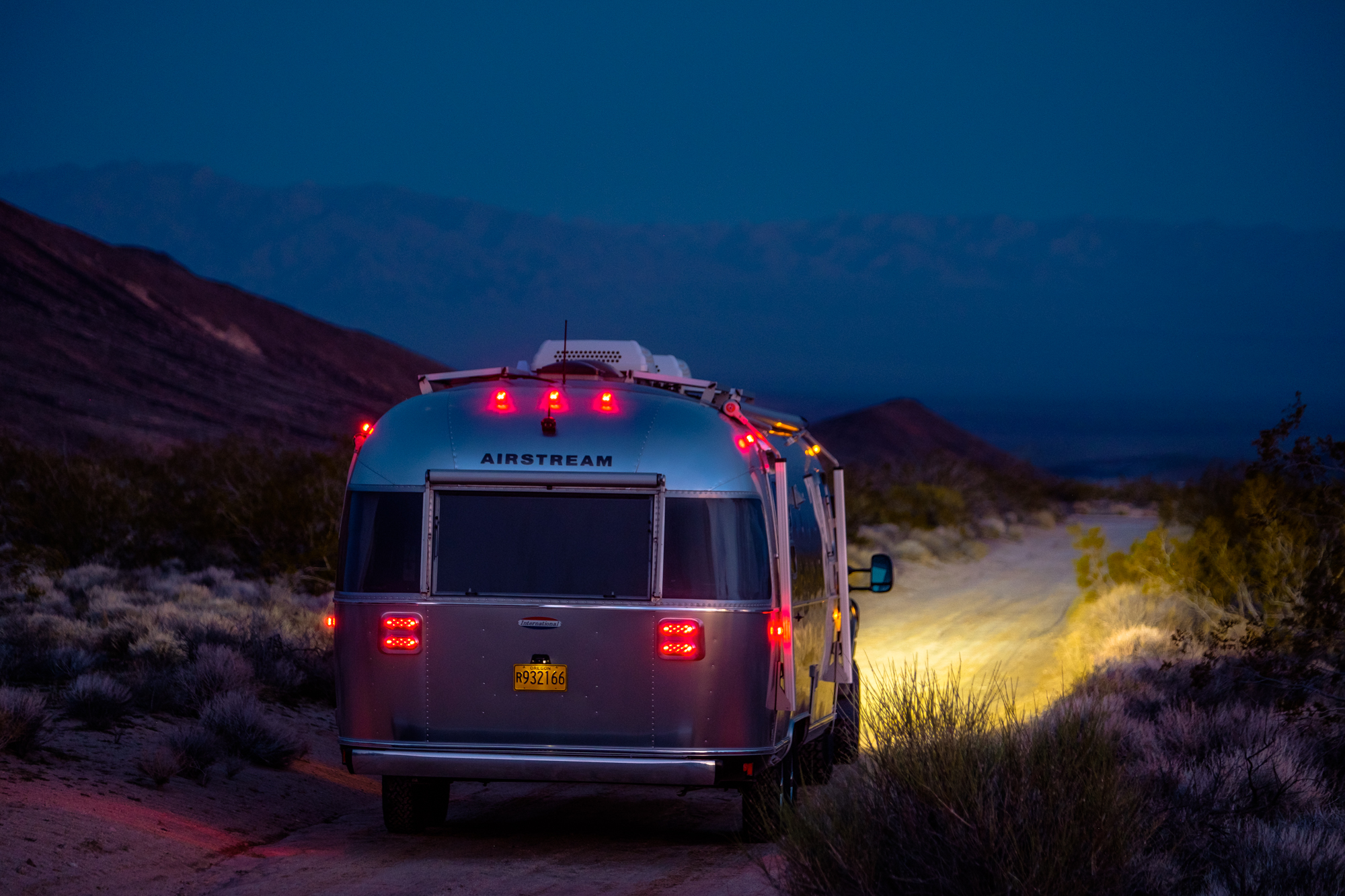 I also loved that Baja Designs has tinted their lights to a natural daytime color, instead of making them that obnoxious white you often see with cheap HIDs on the highway. This warmer tone lessens fatigue on your eyes after hours on the road and makes it easier to see what’s ahead without distortion of colors. This combination of looks and features is enough to draw just about any enthusiast’s attention, but it’s the performance that will make you fall in love.

The LP6 is waterproof and submersible up to 9 feet, compliant with IK10 mechanical impact testing, exceeds the MIL-STD810G MIL-SPEC testing, and when you lift it out of the box feels every bit as impressive as all of that sounds. Every component is made from anodized aluminum, machined aluminum, or stainless steel to ensure complete corrosion resistance and longevity, and a built-in over-voltage protection circuit prevents any electrical damage from occurring due to unexpected spikes. The lenses and optics are replaceable, and Baja Designs backs it up with a limited lifetime warranty and a 30-day satisfaction guarantee. 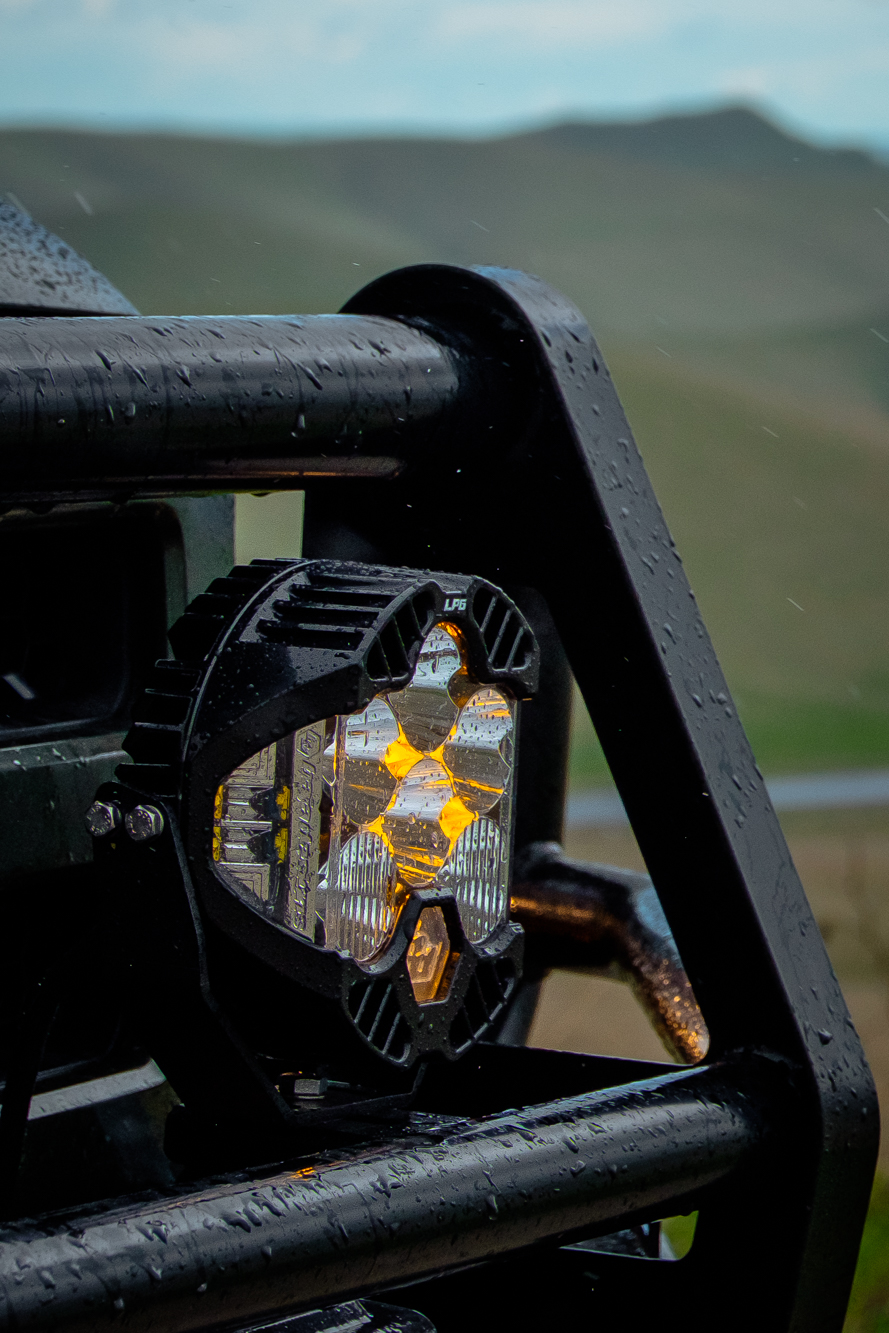 Installation was straightforward when using their proprietary wiring harness, and one of the quickest I’ve completed to date. There was plenty of wire length to work with even for long trucks, the materials were high quality, and the instructions were clear. Sadly, this harness is an additional $95, which feels just a little ridiculous after you pony up the cash for a set of these lights. Fortunately, you’ll forget all about that price tag when you fire up the truck for the first time and hit the trail.

Like the LP9, the LP6 blends distance, cornering, and close range lights into one package by using a main set of forward-facing LEDs along with the Integrated Peripheral Technology to round out the edges. The concept was theoretically the same as what I had been running previously, a staggered spot and driving light combo, but I was immediately struck by how much better the LP6 coverage was. 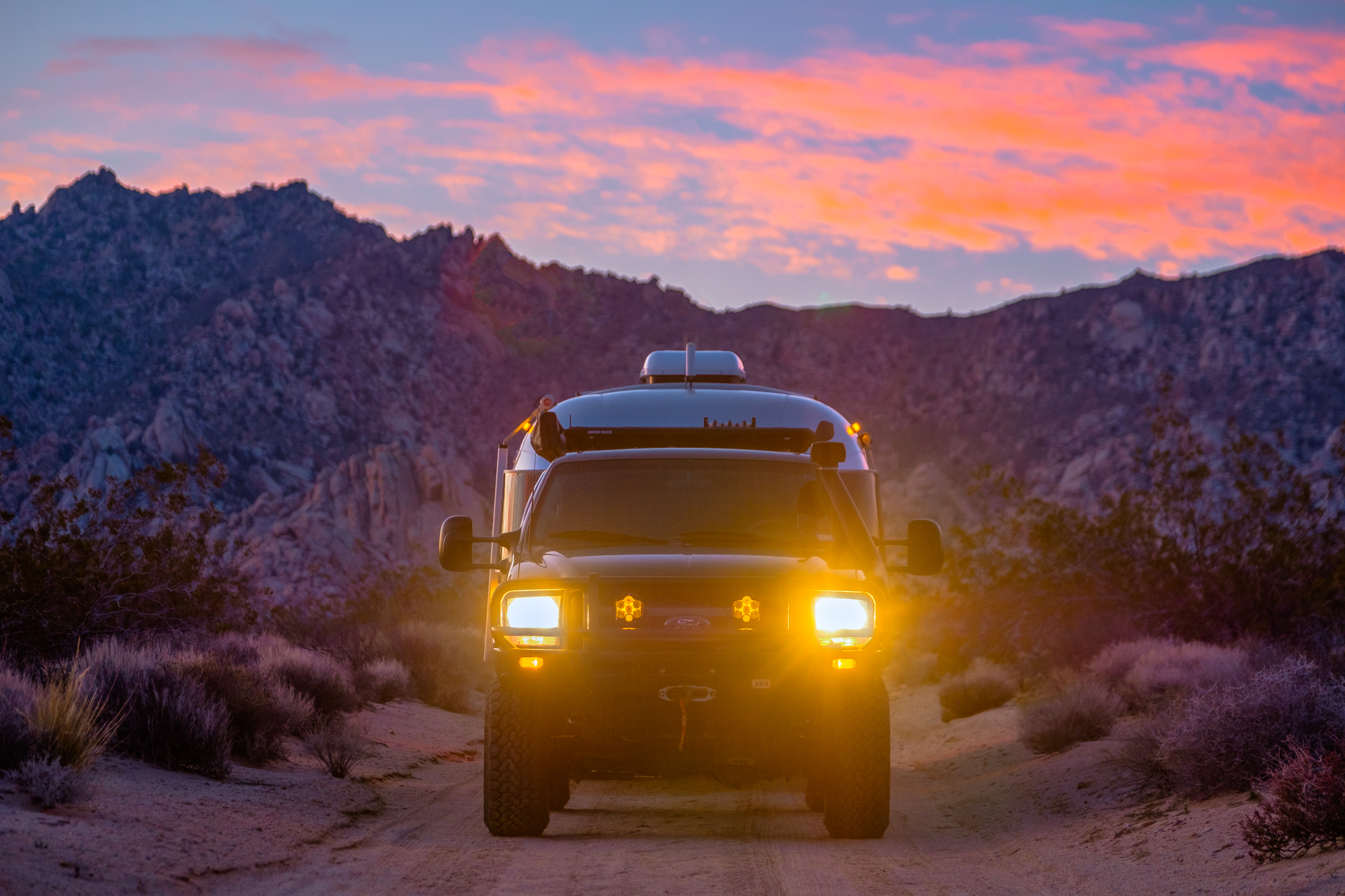 The driving light packs a 42-degree main beam with 200 total degrees of useable light thanks to IPT, which sounds good online, but experiencing it in the field is rather flabbergasting. When rounding corners on dirt roads, the lights illuminate a wide enough swath that I can actually see what’s ahead of me on the bend instead of just what’s off in the distance, and on extended straights, it’s possible to spot animals on the shoulders long before they become a threat. Small turnoffs and campsites off the sides of the trail I would have otherwise missed were now obvious, and the improvement in visibility on slower and more technical terrain cannot be overstated.

Instead of casting a very bright but narrow beam down the center of the trail, the LP6’s pattern spreads well across the road and even back toward your vehicle by 10 degrees on each side. That means you can not only see what’s down the line, but what’s directly in front of your tires as well. This made it far easier to navigate around or over obstacles, thread the needle on narrow two tracks, and even guide my Airstream into a rock-filled camp late in the evening.

Below: High-beam headlights versus LP6s at the same camera settings. Notice the amount of light casting back toward the truck. 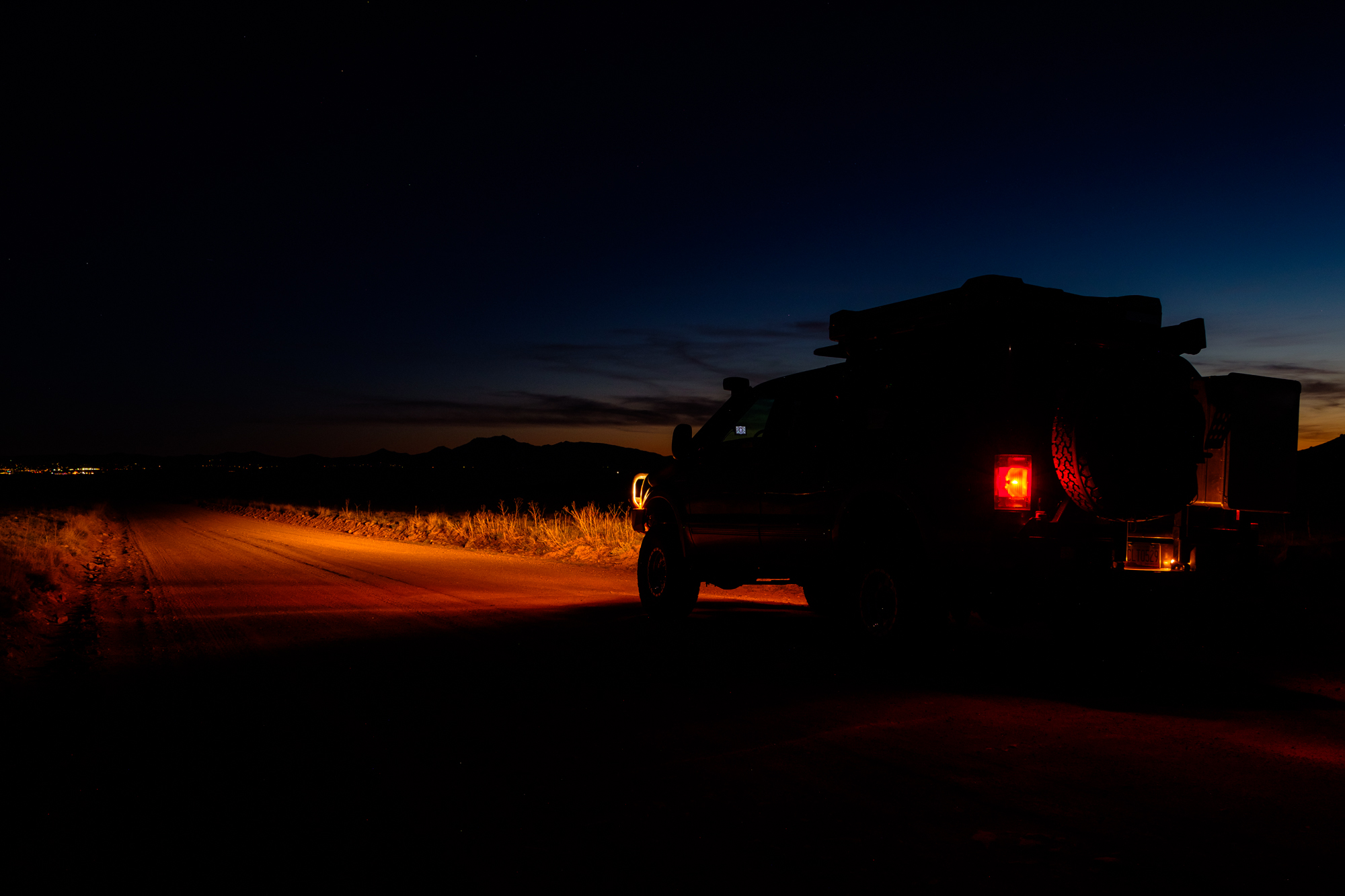 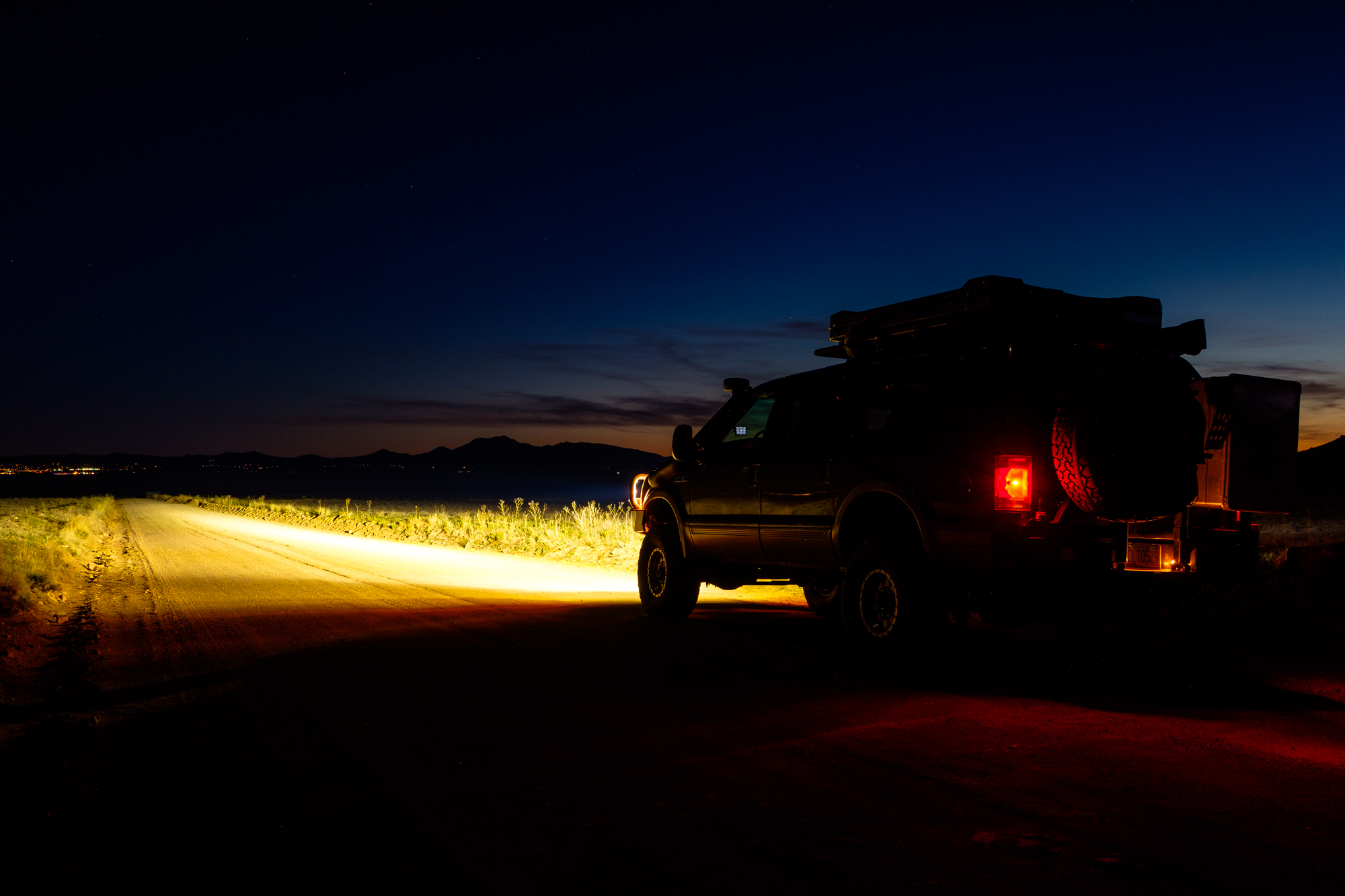 Of course, this excellent flood coverage doesn’t mean that the LP6 is any slouch when it comes to long-distance illumination. When driving at higher speeds I rarely, if ever, came to a point where I was at risk of overdriving the LP6s. That may come as a surprise to some, as the 8,600 lumens from the six forward-facing LEDs might not sound like a lot compared to the enormous light bars on the market. Baja Designs hasn’t gotten caught up in the lumen war though, so you’ll find that despite the lower total number, they’re able to cast a clear beam out past 1,000 feet. If you want something even longer and more focused, you can always throw one of their High-Speed Spots into the mix. These utilize the same peripheral technology as the driving lights but with a much longer and more focused 6-degree main beam. 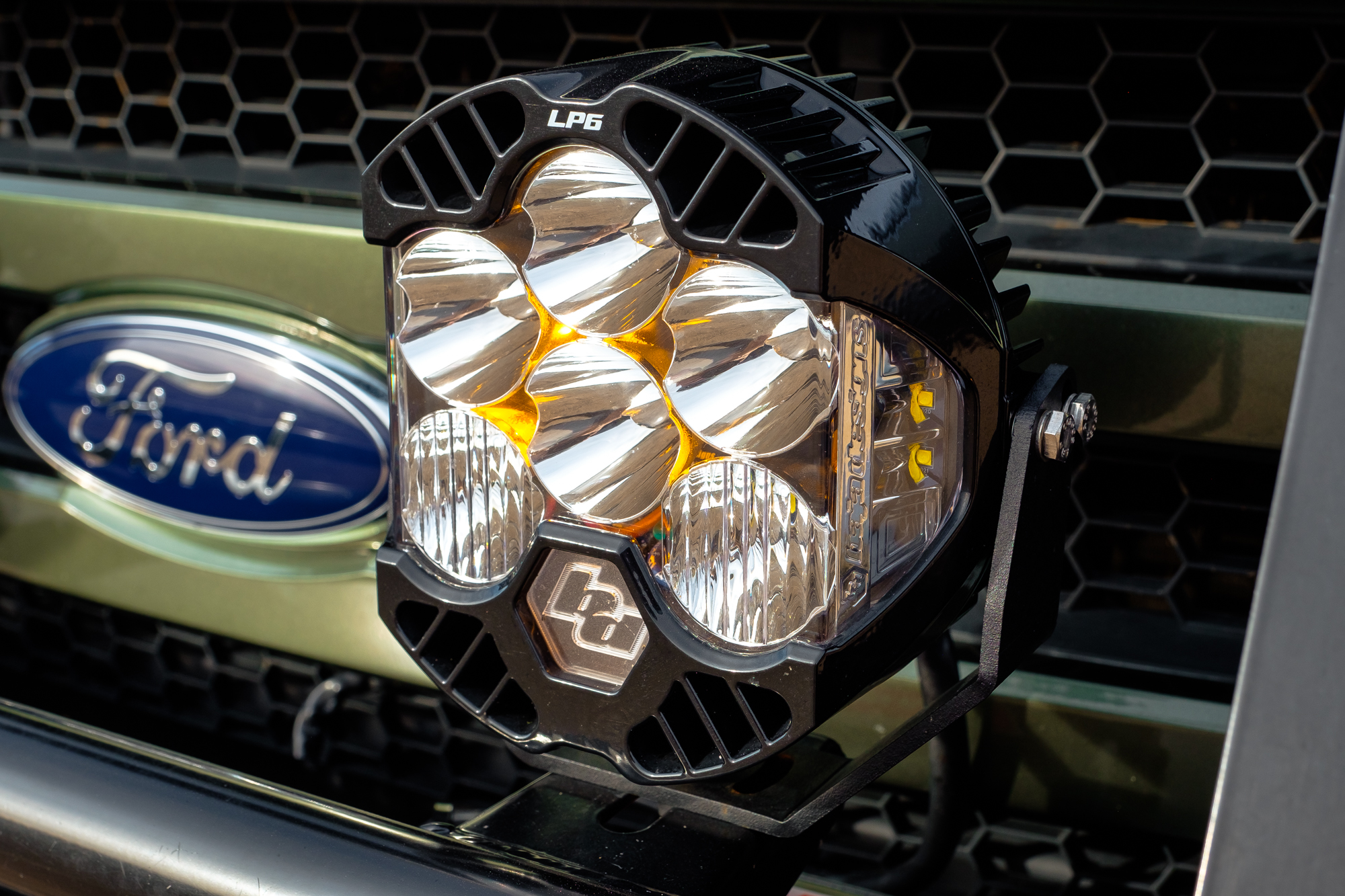 After several months of use, I can say that the LP6 is much more than just a pretty face. In this single light, Baja Designs has found a way to serve the role of three: driving, spot, and flood, and that combination has made my late-night runs safer and more enjoyable. Despite operating in ice, snow, dust, and heavy rain, I can honestly say I haven’t found any fault with this awesome product thus far. At $485 each, they’re far from cheap, but they’re worth it.

To learn more about the LP6 Pro, visit the Baja Designs website here. 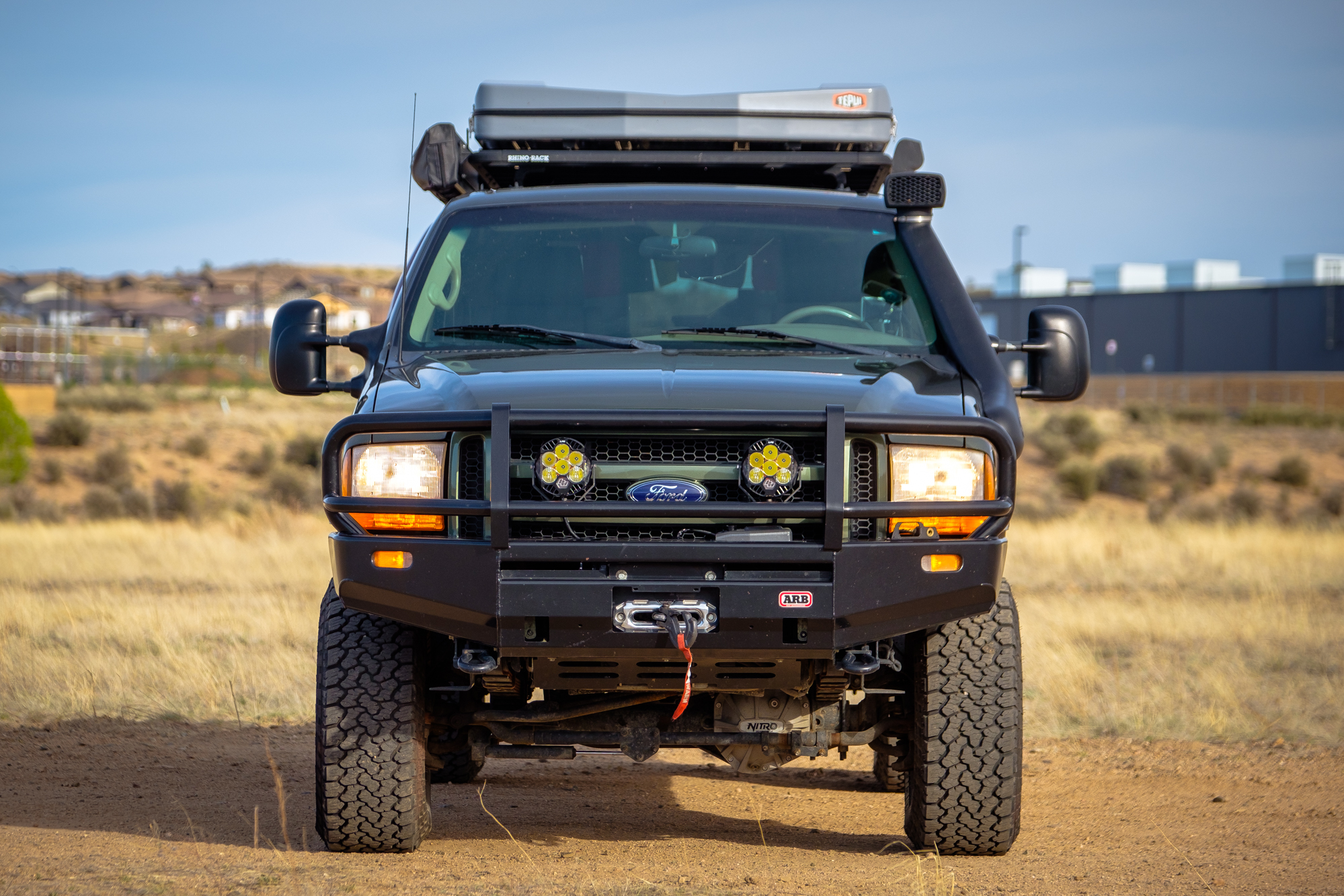 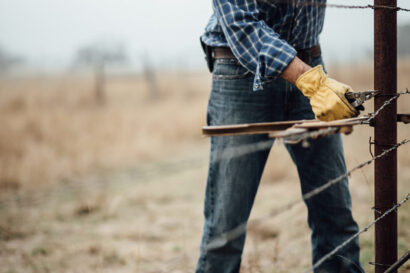 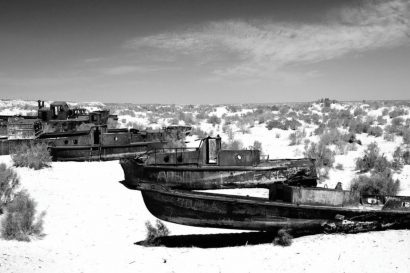 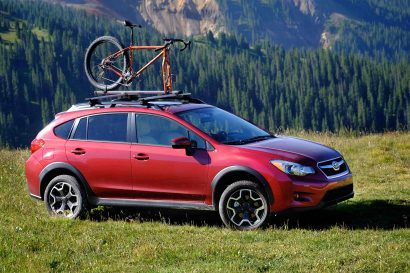