On a late October afternoon in Northeast Tucson, at one of America’s old-time ranches, “old-time” vehicles made their way through dark wooden gates, past the horse barns, and toward the main house of the Tanque Verde Ranch. The participants of the 2021 Copperstate Overland have gathered for a yearly excursion along forgotten roads, hidden waypoints, and incredible views. The participants on this dirty voyage are as unique as the event itself; many members have Copperstate badging dating back to its inception seven years ago.

The requirements to join this road rally include automobiles from 1979 or older though “special consideration will be given to exceptional vehicles manufactured after the 1979 model year.” As you might imagine, many extraordinary vehicles apply; this year, only 22 were accepted. Some of this year’s participants included classic Broncos, International Scouts, 40-Series Land Cruisers, and a 1974 Steyr Puch 710 Pinzgauer. 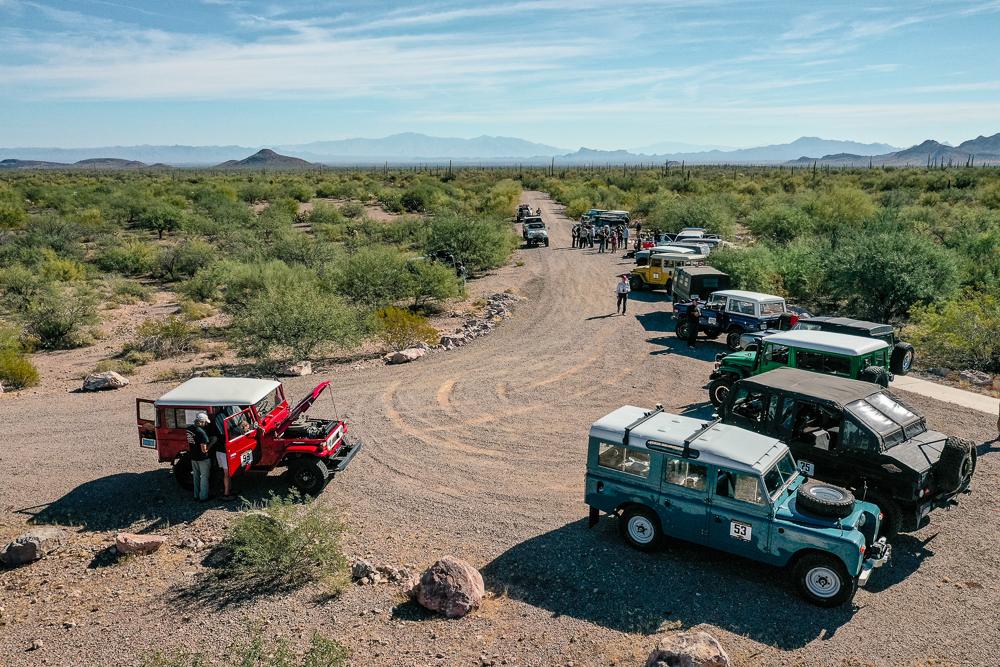 The crew, lined up for the morning’s coffee stop.

The Copperstate Series is special. There’s no other way to say it. A group of around 300 volunteers comprising the Men’s Arts Council (termed MAC) spend eight months mapping, pre-running, and building the logistics behind this fully supported rally. Everything from hotels to happy hours, coffee stops, meals, and on-road mechanics have been considered. The welcome gift, given during driver registration, isn’t filled with the normal grab bag garbage—we’re talking SOG knives, Yeti coolers, and Rugged Radios, just to name a few. It’s also the reason why the Men’s Arts Council exists and is a fun way to support the Phoenix Art Museum. 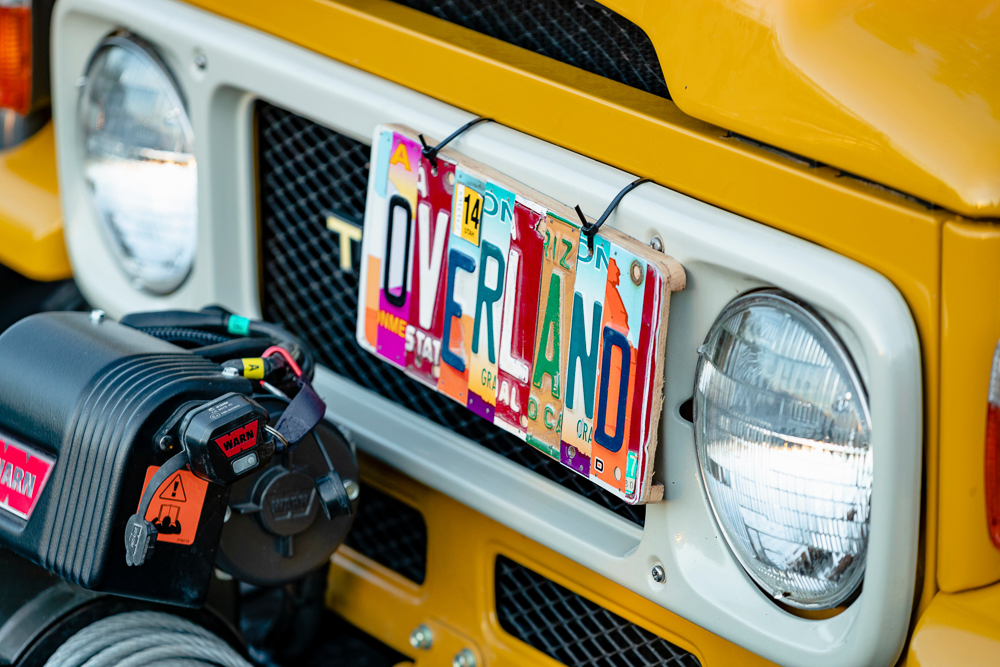 Sneak peek of participant gifts on this 1979 FJ43, which started its life in Colombia and was imported and fully restored in the US.

As the sun rises over Tucson’s Rincon Mountains, a chorus of Gambel’s quail, horses, and other desert sounds pair with the grumbles of vintage vehicles. Today’s route moves west through the high desert, putting the vehicles through a quick dirt shakedown before moving into more rocky terrain. About an hour in, we stop at a decommissioned missile complex for pour-over coffee, photos, and a snack. After a quick lunch, we head south through Saguaro National Park and through one of Tucson’s hidden gems—the Buenos Aires Wildlife Refuge. We keep our eyes peeled for the rare masked bobwhite quail, among other species. Jumping back on pavement leads us to the Tubac Resort for happy hour, dinner, laughs, and rest for the night. 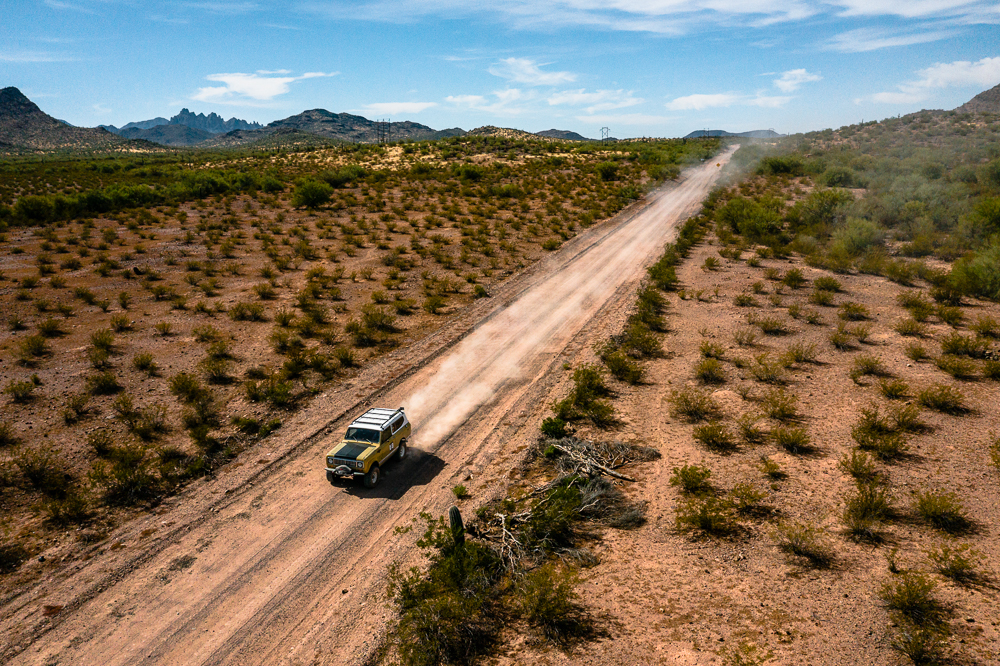 An International Harvester blasting through to Buenos Aires Wildlife Refuge.

On Day 2, drivers waved goodbye to a brisk morning in Tubac, heading east along the Salero Canyon Trail, tucked into the Santa Rita Mountains. This area is adorned with mining ruins, the smell of silver in the air, and adobe ruins initially discovered by Spanish Jesuits arriving as far back as the 1690s. Tucked under shaded trees, we enjoyed lunch, witnessing Arizona’s only Patagonia—a forgotten mining town with a colorful Tombstone-style past. Finally, running parallel to the Mexican border, we arrived in beautiful Bisbee. 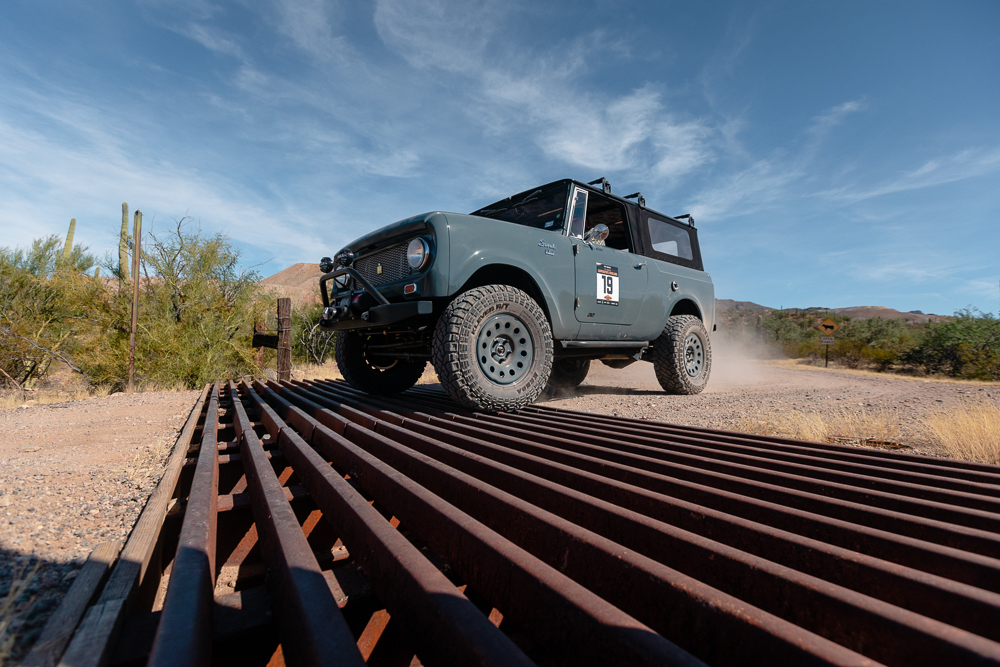 This 1962 International Harvester Scout 80 was originally purchased for $2,800 in the mid 2000s, and has participated in five Copperstate Overland events! Utilizing the original body, frame, and axles, the owner has fitted a 5.3L V8 paired with a 4L70e. Reliability and old taste, does it get any better?

The home of the Copper Queen Mine, Bisbee gleans a light into a lovely blend between Arizona’s past and present. Once a booming mining town, Bisbee is now a quaint and unique getaway for visitors and locals alike. From there, our tires hit dirt quickly, entering the Leslie Canyon National Wildlife Refuge, which houses some 270 bird species, often drawing large groups of photographers. Shortly after, our trails took us into New Mexico via the Geronimo Surrender Monument. After lunch on the trail, we headed back across the Arizona border to stare down the famous Chiricahua Mountains and the Cave Creek Canyon (also known to the locals as the Yosemite of Arizona). Weaving through rock spires, hoodoos, and the local animal population, these ancient dwellings are ripe for stops to drink in the views, and maybe take an Instagram photo or two. We knew we had made it when we saw Camp Overland, our own town of Cruise America RVs, chosen specifically for this event. Grab a cold one and put your feet up, for tomorrow, we ride! 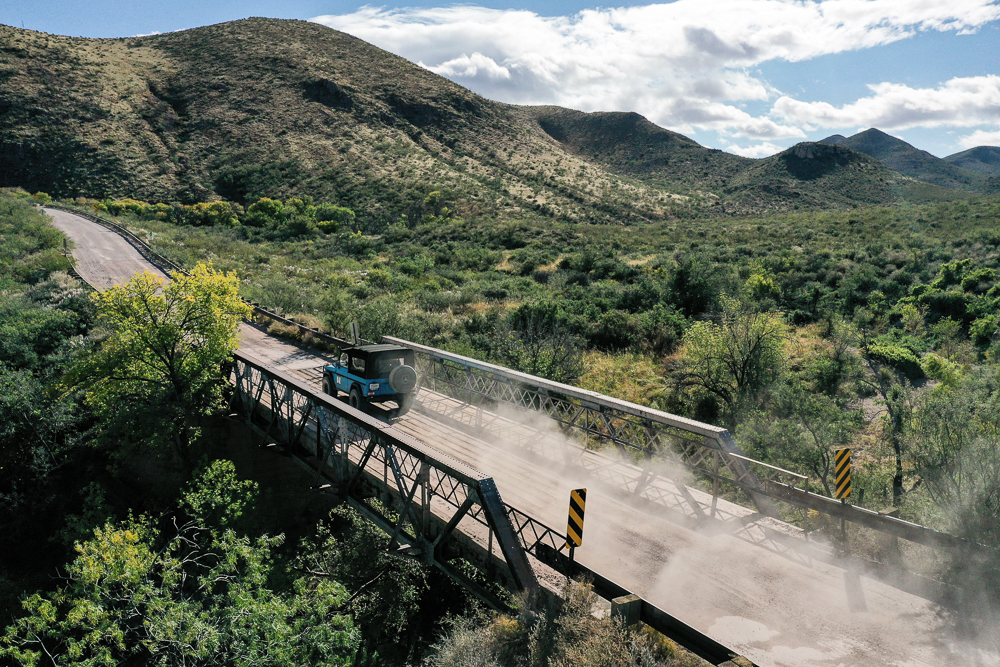 This 1988 Mercedes-Benz 240 GD was used by the Danish military for NATO duties until 2016. It was then auctioned and bought by a Polish company that performed a total restoration.

The next morning kicked off with adrenaline as we cruised along a private fast track of dirt trails that hug the base of the Galileo Mountains. We then reached the entrance of Arizona’s Inde Motorsports Ranch, where the 1,700-acre adult fun park is ready to hear engines sing. After we play race car drivers, we get back in the dusty rigs and point the compass north through the San Pedro Valley. We pass the Cascabel ghost town, and Rincon Mountain Wilderness Area, which boasts deep canyons, rocky ridges, and some of our most technical sections of the trip. The track ends back at our accommodation for the evening, the Tanque Verde Ranch, where we enjoy an evening of festivities and an awards banquet. 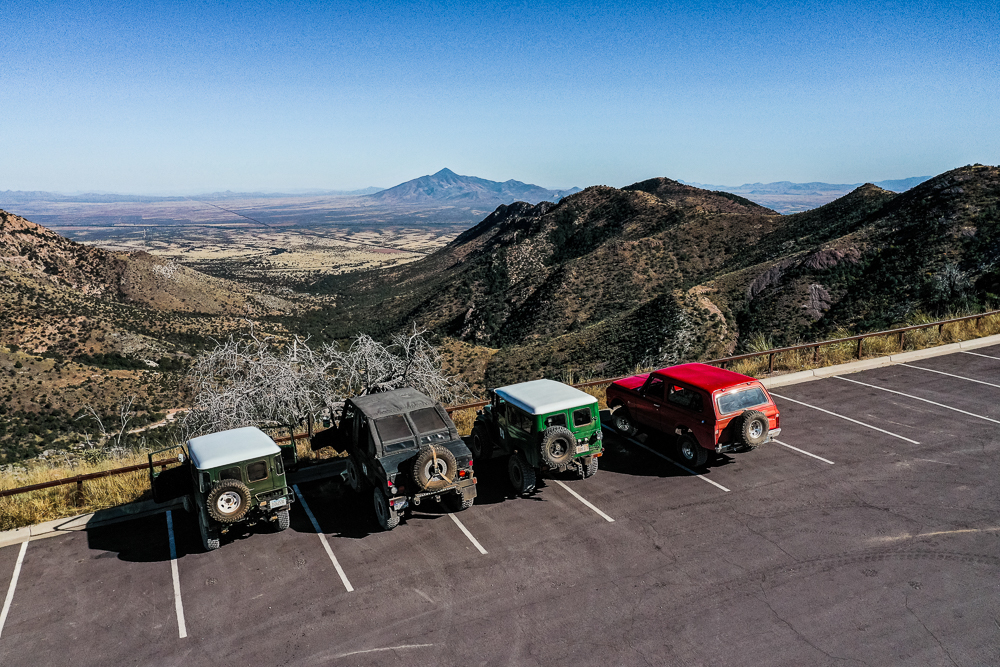 From left to right, enjoying the view: 1967 Toyota FJ40, 1975 Volvo C303, 1983 FJ43, and a 1972 Chevrolet Blazer. The unique Volvo monstrosity of particular interest in the middle has a street name is Terrängbill 11, roughly translated into “Terrain Vehicle 11.” This C303 is the base model of a range of military vehicles produced by the Swedish car maker. This version was produced as a 4×4 and this beautiful 6×6.

The trip concluded on a somewhat melancholy note. Some of us likely won’t see each other until next year. Some rigs will return, some won’t. The one commonality is the badge of honor participants take home from this non-profit event. Not because it’s the most difficult or technical, but because the participants themselves make this event entertaining and unique. 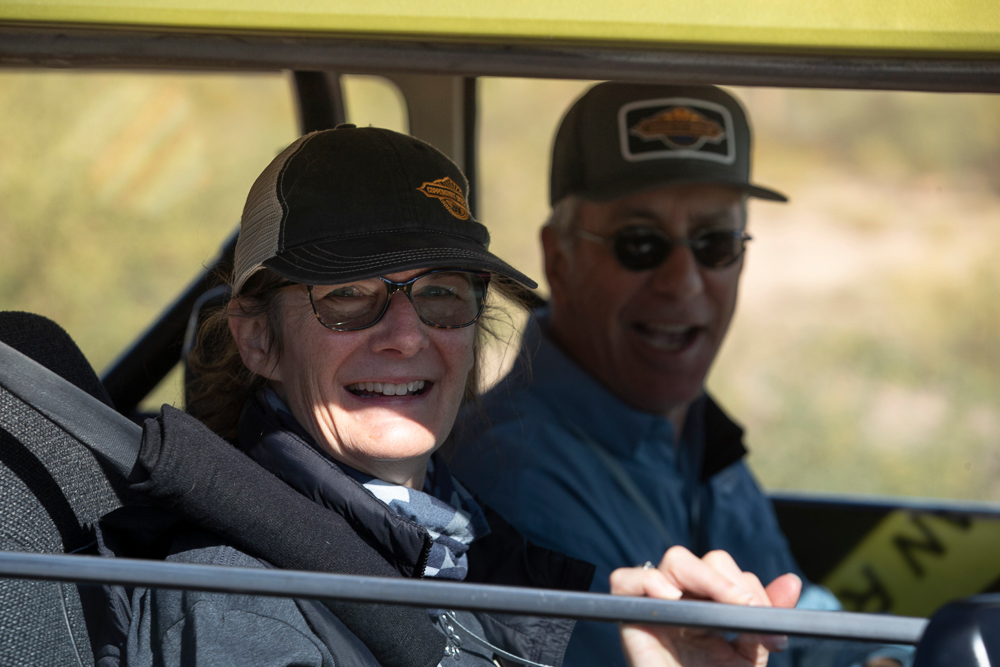 Founding members of the Copperstate Overland, in their 1973 International Harvester Scout II.

To learn more about the Copperstate Overland Rally, visit mensartscouncil.com.

Chuck Coolidge of HuntHikeHook lives in Phoenix, Arizona. He travels often to feed his fly-fishing and upland passions while always exploring new territories.