There are people who love old Triumph motorcycles and classic Italian sports cars, and for good reason. These machines were design icons in their time, and they force the user to become active and essential participants in the experience. For every thrilling apex, acceleration, wind in your hair corner, there is a greasy oil puddle to nurture back to life. The equivalent of the Coleman Stove is a Land Rover Series 3 with a V8 engine, soft top, British Racing Green. It won’t thrill you, but it has the potential to be powerful and impressive—if the carbs are tuned correctly, the spark plugs are set just right, the vacuum advance is doing its job, and the coil and distributor have ended the ceasefire. You will either love it or hate it and maybe not for the reason which you suspect. But either way, you are forced to become a participant in the experience.

For three years, we travelled across the Americas using a Coleman Stove which was lit as often as three times a day. Ours was a 414 variant with space enough for two decent sized frying pans. We had plenty of time to discover the pros and cons of this dual-fuel dinosaur. 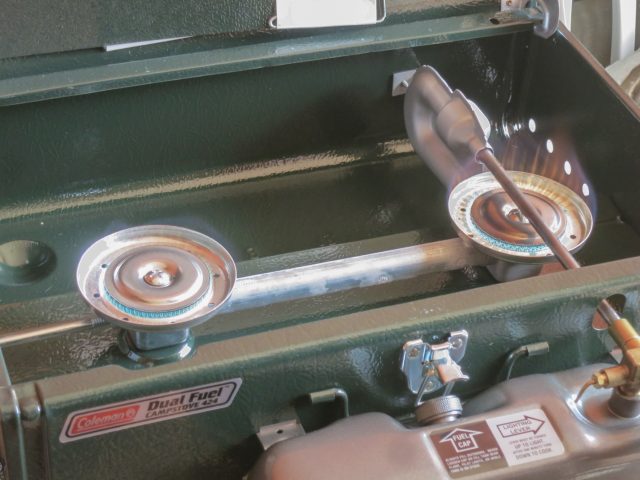 It is called the dual fuel for a good reason, and you can run the old bugger on either unleaded gasoline or white gas (petroleum naphtha) if you can find any white gold in the corner of the Amazon. Motorbikes run on unleaded fuel, and the developing world runs on the pillion of a 125cc Chinese motorcycle—you will always be able to find fuel, and if your vehicle runs on unleaded gasoline, you will usually have extra on board.

If you drive an ancient Toyota or Land Rover, wear no color from the 20th century, sport a leather hat, and listen to The Shadows while sharpening a wood-handled axe, the Coleman is the stove for you. If you despise composite materials, Lady Gaga, and K Pop (perfectly understandable), computers, the future, and any technological achievement since the moon landing, the Coleman is the stove for you.

Size matters. The Coleman is a real stove made to cook a real meal. Pansy slimline LPG modern stoves cook tacos, vegetarian food, noodles, and namby-pamby couscous based dishes. The Coleman is meat and two veg, large pots of potatoes, corn, and a frying pan of buttered, seared, salty flesh or a hand-caught trout. It has the heat and girth to cook for a group of six if it is in the mood. 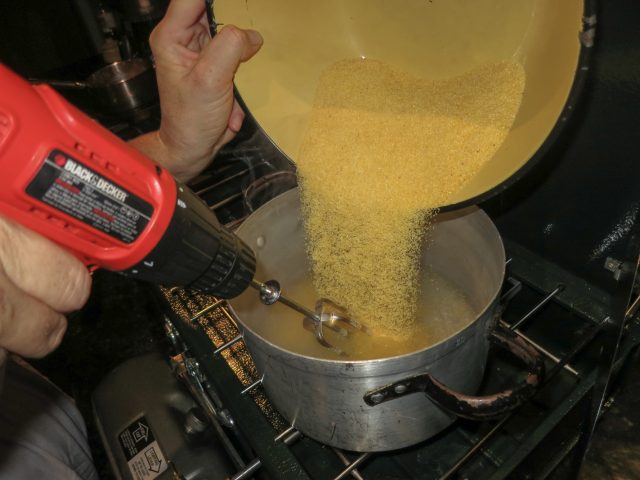 It gets hot, damn hot. If you can achieve blue flame nirvana, you could melt the sun. If.

When your firstborn throws the stove on the roof rack and forgets to strap it down, and the Coleman flies off the roof after the first serious bump and lands BANG on the trail, you can rest assured that it will survive. The dents and scars add character. The Coleman is the Clint Eastwood of stoves: it will sneer, grit its teeth, and growl “dumbass” before getting back to work. 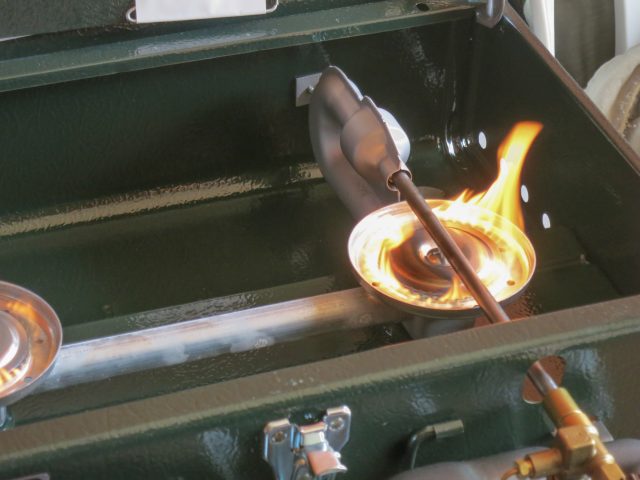 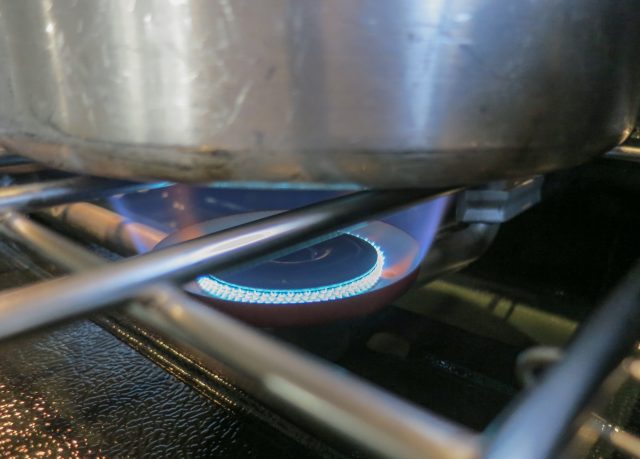 The Coleman is the equivalent of a hand-cranked Model-T Ford, if the Ford was a lot more difficult to start. First, you need to get the jerry can off the roof rack and then find the little funnel which your wife stores in a different place (every time). Then you have to fill the little reservoir without spilling highly flammable fuel. Next, the reservoir has to be lined up perfectly while inserting the stem into the manifold and clipping the reservoir onto the stove body—this takes some skill. Then we pump for pressure. Too much, and the fuel will leak. Too little, and blue flame nirvana will not be achieved. To light, simply open the choke and fuel valve, flick the Bic (don’t burn your hand), adjust the flow, pump, pump, pump, adjust the airflow toggle, open the second burner, pump, pump, adjust airflow, close the choke, then reopen the choke as the flame burns orange. Slowly now, patiently, micro-adjustments, yes, almost, yes, nearly, alllllmost—Blue Flame Nirvana! Until someone adjusts the heat, spills some water, or absentmindedly turns the burner off but still needs it on.

It is as if the designer of the stove one day achieved blue flame and then gave up on refining the design, declaring, “Heck, that’ll do.”

That overflow from the rare pot of rice must be cleaned off before the Coleman is packed away. To do this, you need to disassemble the cooker and clean the interior until it shines dry. Failure to do so will result in almost immediate rust as the Coleman is constructed of leftover sheet metal from World War II.

No matter which size Coleman stove you use, it will be as big as an old-school suitcase as there is not much more than a 4-inch difference between the two. Strapped on the roof rack beside the canvas duffel bag, jerry cans, ancient Hi-Lift jack, and cow horns is the perfect place for the 414, in a waxed brown waterproof bag circa World War One.

At the risk of achieving a chuckle and a scowl, lighting the Coleman Stove is the only thing on earth a man can do that a woman cannot. This has been proven by the science of observation. Yes, there have been the odd women who have been able to achieve Blue Flame Nirvana, and there are an equal amount of men who have given birth to live young. My wife, who drove across half of West Africa and is known and feared as the Shieldmaiden, is utterly defeated by the Coleman, despite being fiercely independent and needing three cups of tea a day. She hated the damn thing and eventually refused to even try to light it, calling me from my doze in a hammock or from under the Landy to light the bloody thing so she could have her cuppa. If you must have a Coleman Stove and a wife, insist on buying a Stanley flask and cry once, again.

This is not 1905. Jules Verne steampunk be damned. I like personal computers, the apps on my smartphone, the new Ducati, solar power, lithium batteries, LED lights, and indoor plumbing.

The Coleman will kill you if given a chance. It clearly states on the label “Do not use indoors, this bloody thing will kill you.” But those guys who grew up in the ’70s and ’80s will scoff and call you a lady boy in a gruff voice, “I have used mine in the Landy almost every night since 2016.” Yeah, but you will be dead by Tuesday, Brian. The label reads:

This appliance can produce carbon monoxide, which has no odor.

Using it in an enclosed space CAN KILL YOU.

Never use this appliance in an enclosed space such as a camper, tent, car, or home.”

But Brian has not suffocated all his brain cells just yet. You see, the warning says it CAN produce carbon monoxide; he is a smart lad and will take his chances with that loophole.

What is not odorless is the constant scent of regret and frustration. 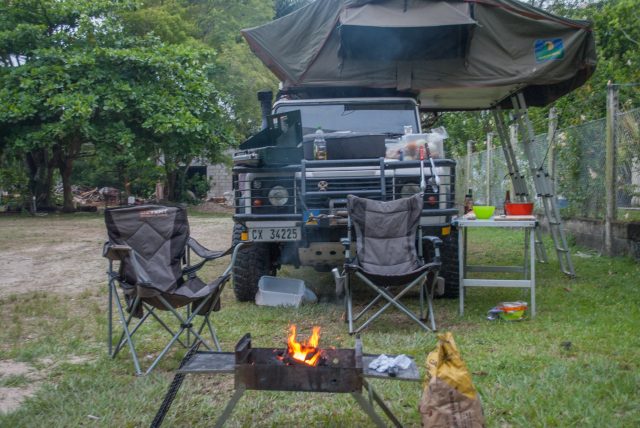 In summary, the Coleman stove is the perfect stove if you drive an ancient 4WD once a month to a place with few people, and a great view—where you can potter about camp, gin in hand after a short hike, bird spotting. It is perfect if you use a compass and paper maps for navigation and spend most of your time at home in the garage, repairing old things on a wooden bench beneath a 1983 Samantha Fox calendar, the smell of Old Spice and leathery grease hanging in the air.

The Coleman stove is not the perfect stove if you have a life, better things to do, and are on an overland trip which may involve inclement weather and more than a weekend on the road. We loved our shiny new stove for three minutes and hated it for two years, 364 days, 23 hours, and 57 minutes. But, to be perfectly honest, I would have loved the stove if Mrs. Bell knew how to use it, too. Despite all its weaknesses, the stove does remind me of an imperfectly perfect old Land Rover. coleman.com

Graeme Bell is a full-time overlander and author. He was born in Johannesburg, South Africa, but considers Europe home when not traveling the planet with his wife, Luisa, and two children, Keelan and Jessica, in a Land Rover Defender 130 (affectionately known as Mafuta). To date, the Bell family and Mafuta have for seven years toured Southern and East Africa, circumnavigated South America, and driven from Argentina to Alaska before traversing the US from coast to coast. In December 2016, Graeme personally transformed their Defender from a standard double cab into a camper with through access, a pop-top, and sleeping for four in anticipation of their current adventure: driving from Europe to Southern Africa.