For decades, dual-battery systems have been the go-to solution for anyone seeking auxiliary electrical power in their four-wheel drive or camper van.

They make it possible to run accessories like refrigerators without draining the vehicle’s starter battery, but they’re also costly, permanent, and complex systems that can be prone to failure or even fire unless expertly wired. Regrettably, there just weren’t a lot of viable alternatives, but a shift may be on the horizon.

Portable power packs from companies like Jackery and Goal Zero are becoming more versatile and powerful than ever before. Not only are capacities getting larger, but expanded input/output ports are finally enabling customers to integrate third-party solar panels and electrical components, which got us wondering. Could these plug-and-play systems finally be ready to usurp the dual battery as the kings of auxiliary power? To find out, we dove deeper into the weaknesses of portable power packs, as well as their considerable strengths. 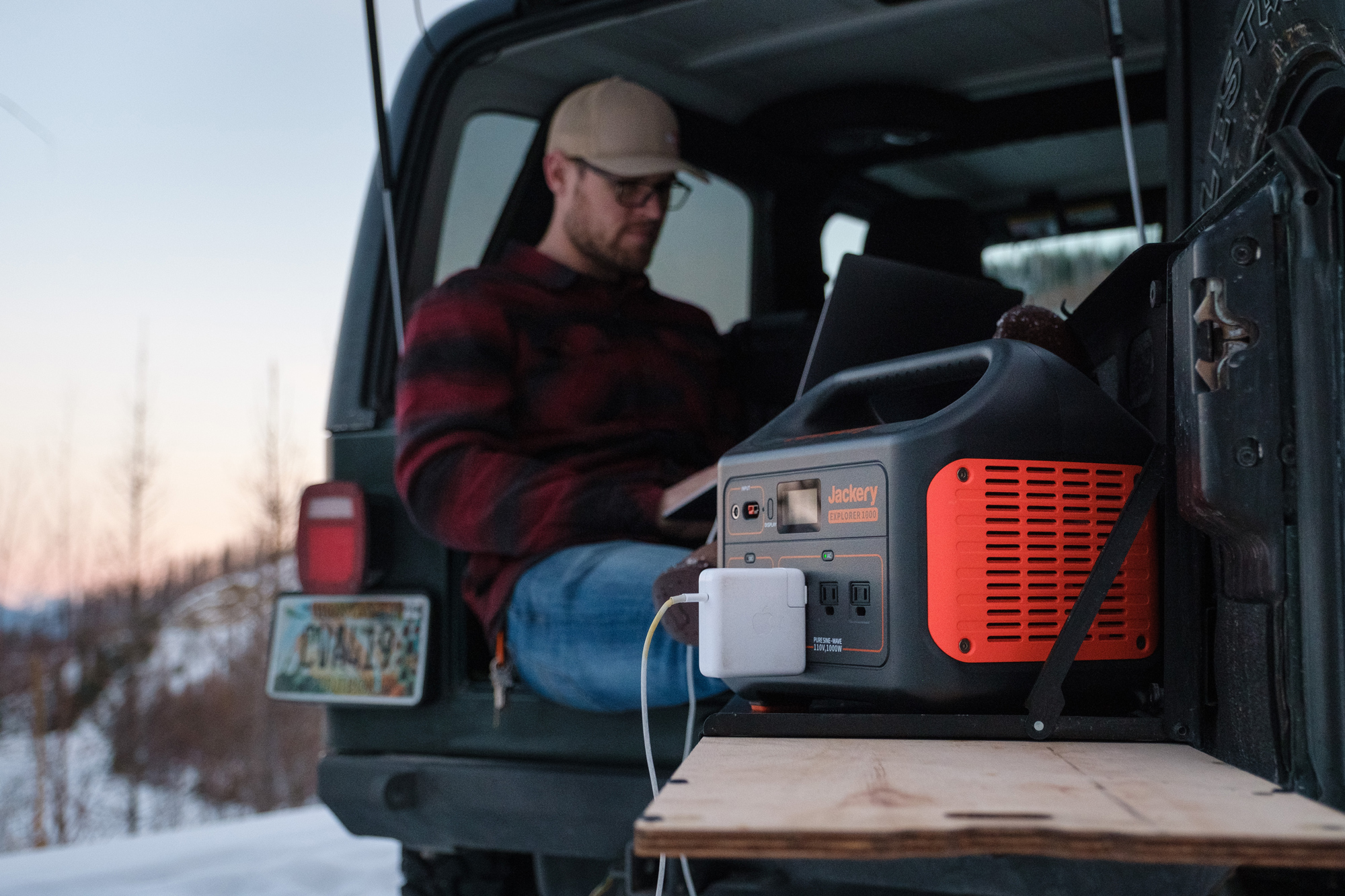 Capacity – Can it really power my fridge?

The biggest challenge power packs have traditionally faced is capacity. As anyone who has lifted a car battery can attest, lead-acid packs aren’t light, so the only way manufacturers could make them “portable” in the past was to reduce the total size. This made them impractical as dual batteries because their total capacity was limited. But thanks to great strides in lithium-ion technology, manufacturers can now pack far more power into a much lighter package. 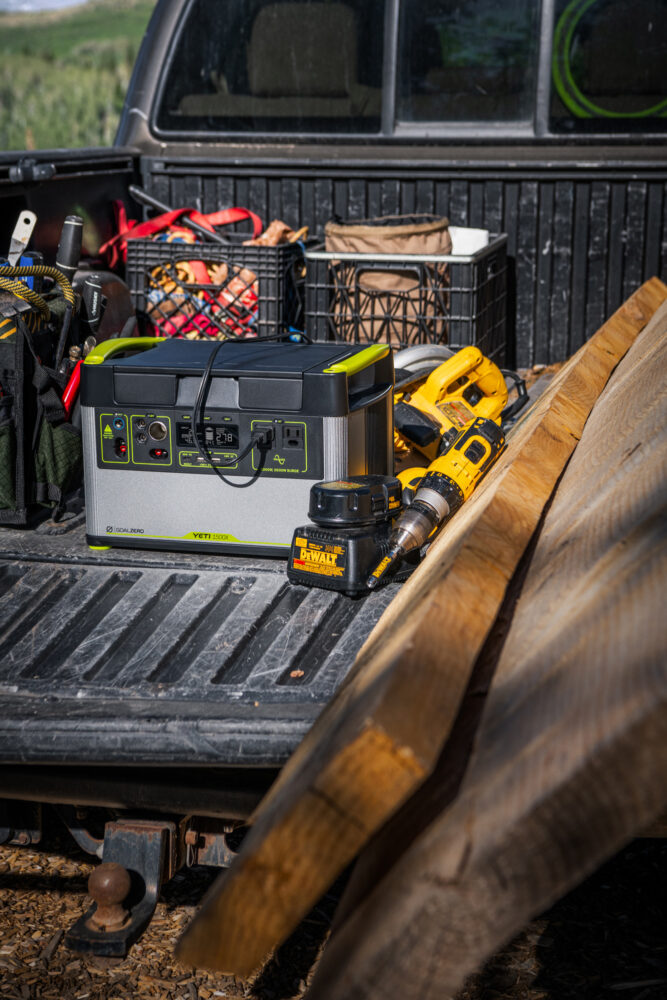 Case in point, the Jackery 1000 and the Goal Zero 1500x. Both of these systems are designed to meet the needs of the demanding outdoor enthusiast but are still safely within the acceptable range of price and portability. The Jackery 1000, which retails at $999, boasts an impressive 1002-watt-hour capacity with a 1000-watt inverter and 2000-watt surge capacity. That exceeds Optima’s biggest yellow-top which carries a 900-watt-hour capacity, and narrowly misses BattleBorn’s 100Ah LiFePO4, which touts a 1200-watt-hour capacity. Clearly, the numbers stack up, but what do 1002 watt-hours mean for real-world charging? 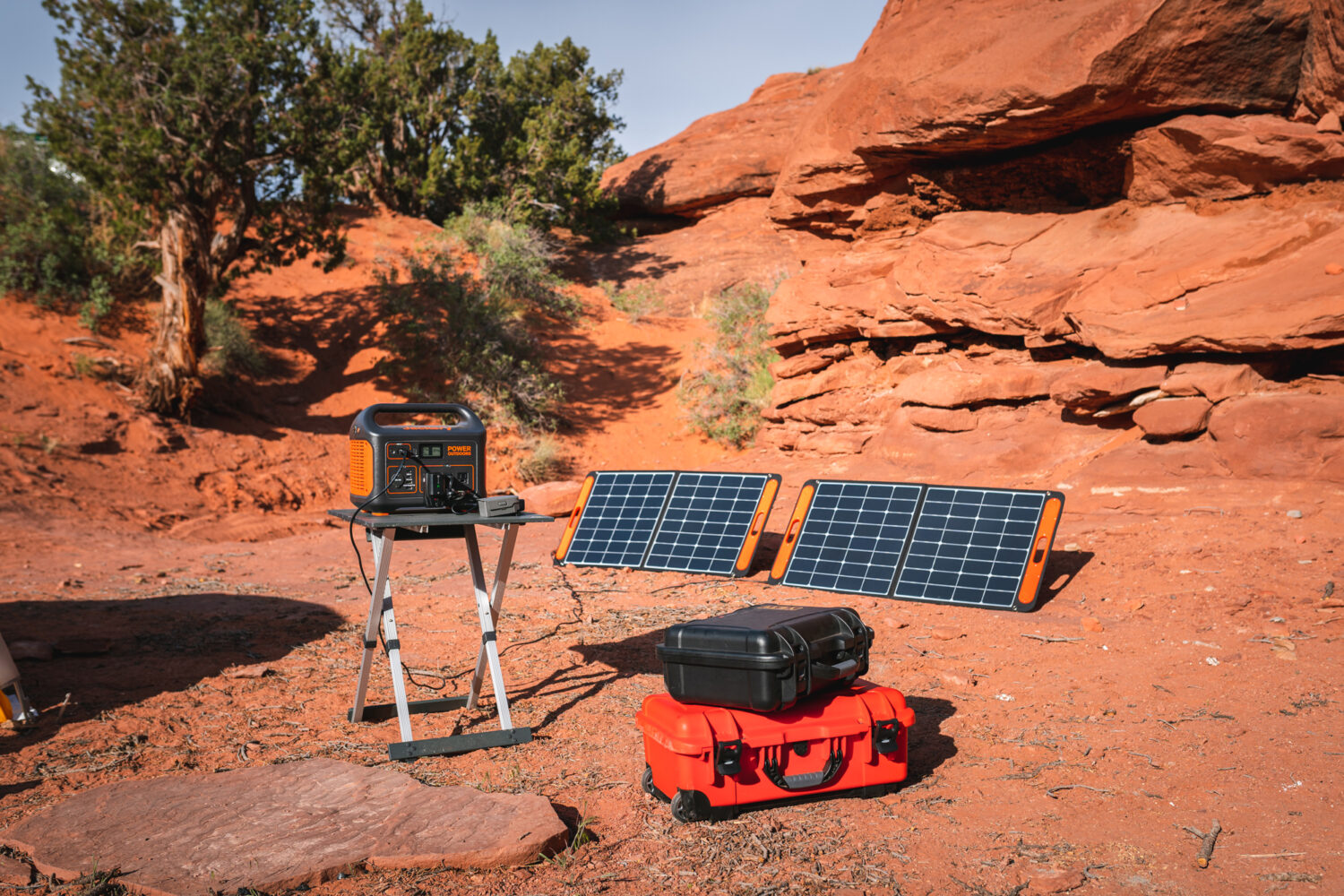 According to Jackery’s website, the 1000 can charge a laptop eight times, run a TV for 14 hours, charge a phone 100 times, or even run a blender for 13 hours. That’s all well and good, especially the blender on margarita day, but a more useful metric is that the 1000 can run a 12-volt fridge, USB lights, cellphone, and a tablet for around three days without being charged. Pair it with two 100-watt solar panels or direct charge it from the 12-volt outlet while you drive, and that time is extended significantly, if not indefinitely.

That’s just the tip of the iceberg, though. If you’re looking for even more performance and don’t mind spending twice as much cash to get there, Goal Zero’s 1500x will do the trick. This plug-and-play powerhouse retails for $1,999 and offers a larger 1516-watt-hour capacity, surpassing Battleborn’s and Renogy’s 100Ah offerings. It can charge your phone once a dayfor four months, recharge 300 headlamps, or keep your home refrigerator running for 28 hours on its 2000-watt inverter. Stick that in your plug and power it, Mr. Dual Battery.

Simplicity – No one likes electrical fires

Is your idea of a fun weekend solving for voltage drop using operating current multiplied by the product of length of wire times ohms? If so, this section probably isn’t for you. If not, don’t worry, you’re not alone! Wiring is a complicated task that few attempt and far fewer actually understand, a fact repeatedly proven by burned engine bays and melted components. That’s why the best argument for portable power packs is summarized in one word: simplicity. 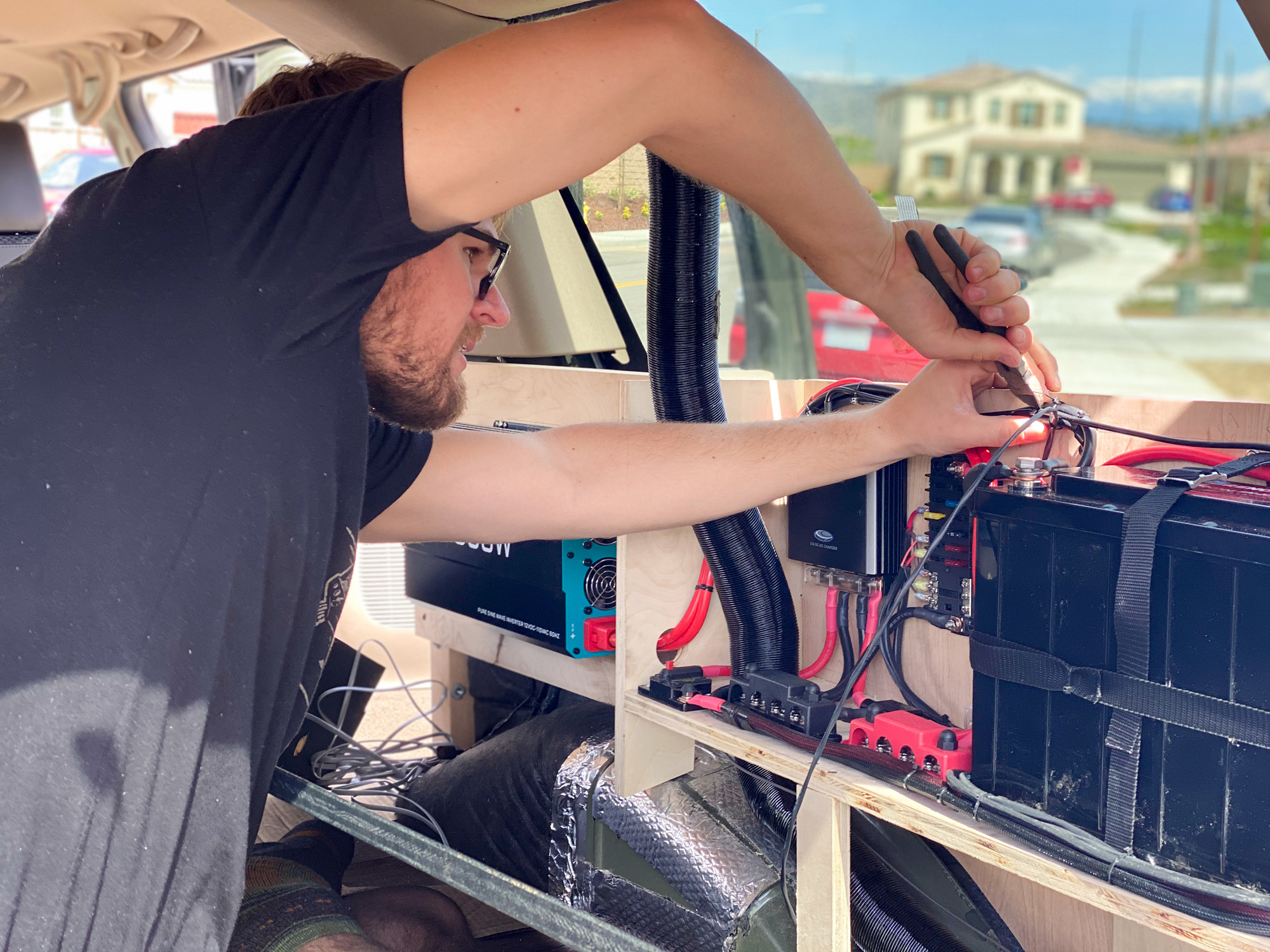 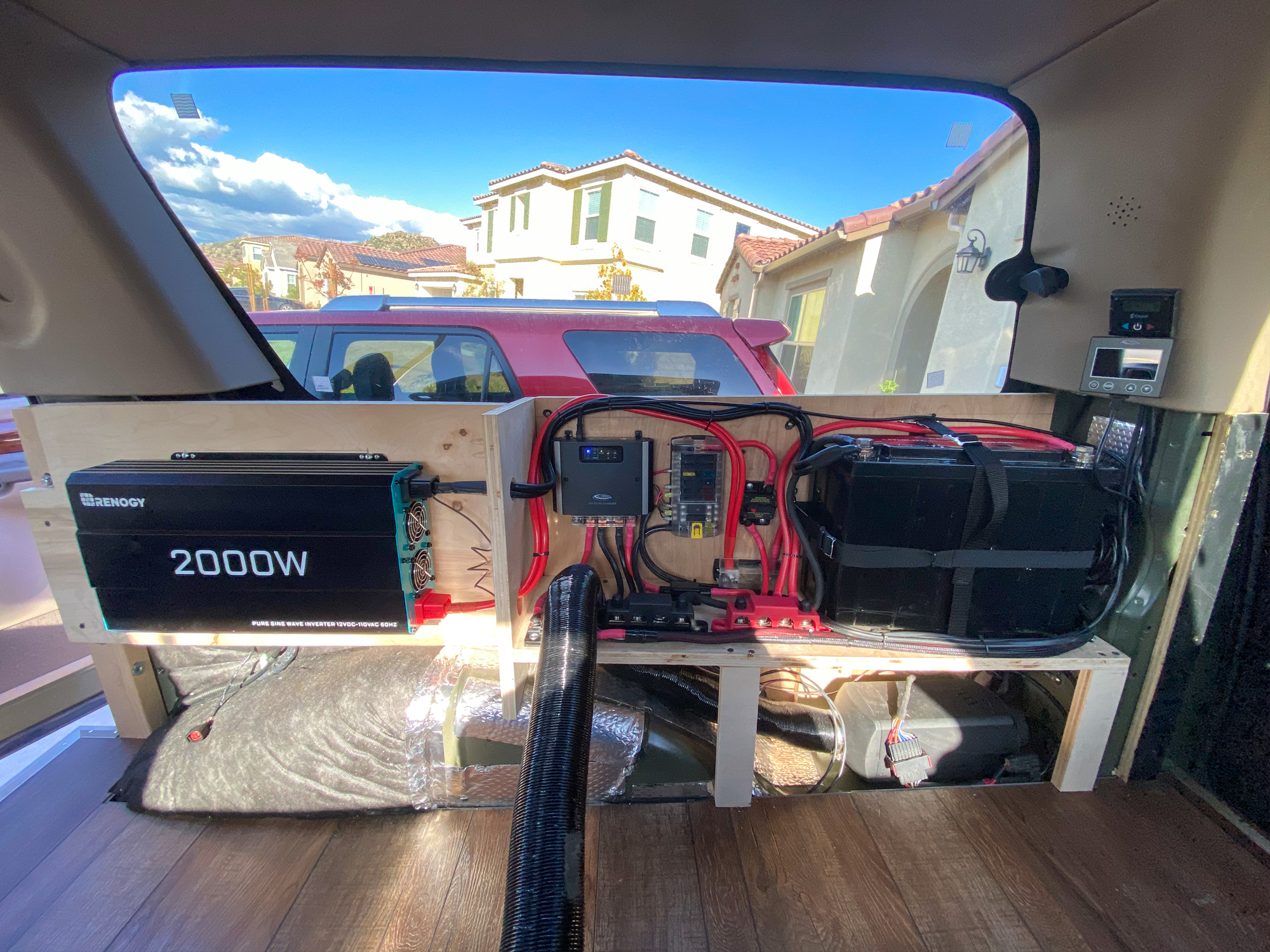 While there’s something inherently satisfying about successfully running the numbers and creating a reliable power system, most people just want to run their darn fridge without killing their starter battery, and that’s where power packs excel. Manufacturers like Jackery and Goal Zero have managed to roll a solar controller, dual battery charger, pure-sine inverter, status display, fuse box, circuit breakers, USB, 12v DC, and 110V AC outlets all together into a wonderfully designed box where all you have to do is plug in and hit the power button. It’s quite honestly miraculous, and it removes all of the risk and complication out of the process. Where I spent a month trying to piece together the auxiliary battery system for my last build, and several more wondering if it was going to suddenly burst into flames, these portable power packs offer a ready-to-go solution with long-term peace of mind. In my opinion, this alone makes them worth it.

It goes without saying that an advantage of a portable power pack is, well, being portable, but that means a lot more than dragging it out for tailgating or using it during a power outage. While those applications are certainly useful, the ability to transfer your power system from one vehicle to another is the real value. That’s because, unlike a hard-wired dual battery, there’s no need to bolt in a battery tray or splice into stock wiring, making power packs ideal for anyone leasing a vehicle or maintaining their factory warranty. Even if you’re well past worrying about a warranty, the ability to simply unplug and move your power system will save you a bundle of money and headaches if you ever decide to sell your vehicle. 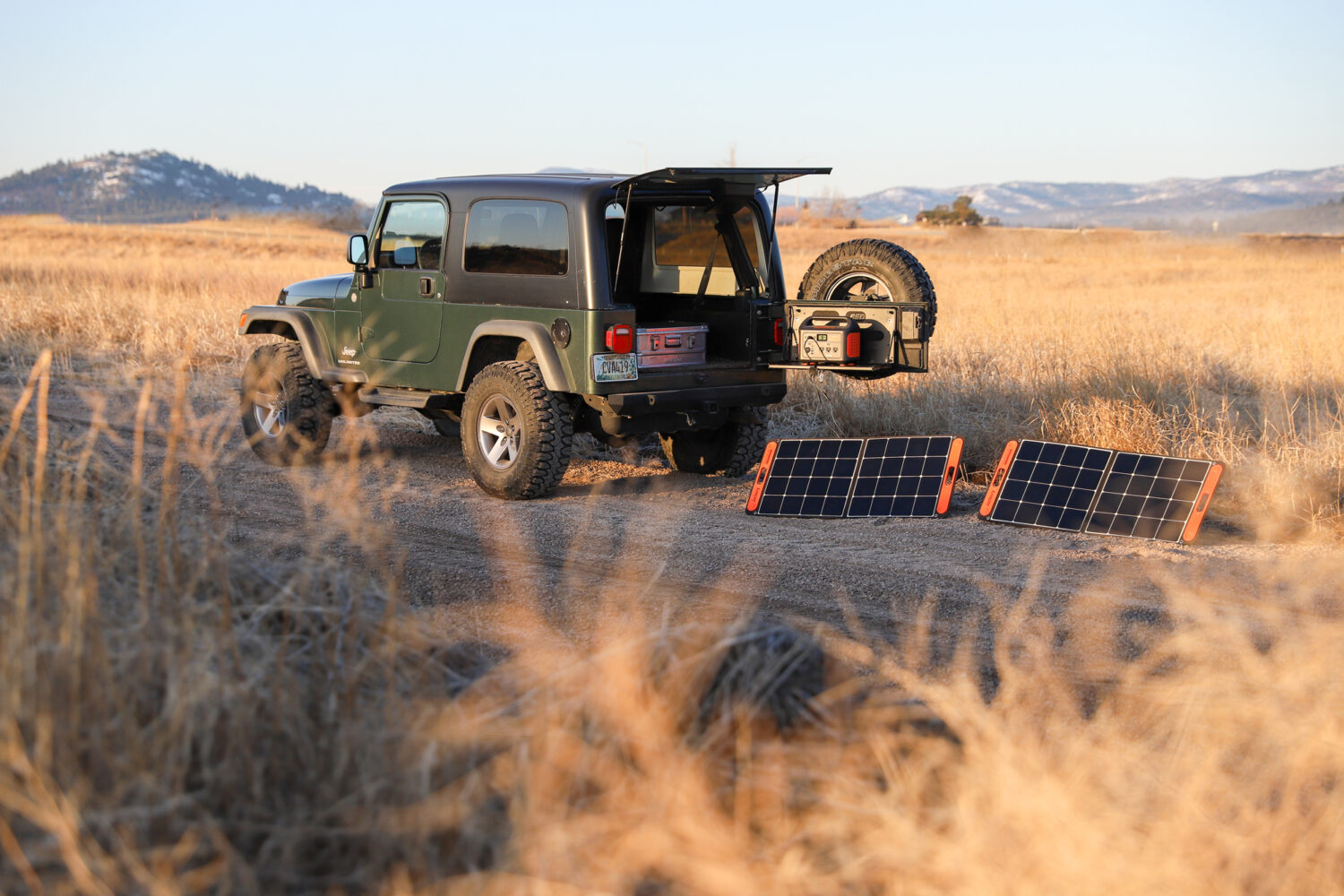 One of the larger concerns with portable power packs has always been cost. More specifically, their perceived value based on price versus total capacity. But when you start to add up the numbers for all the components, the results can be surprising. To demonstrate what I mean, I put together some of the basic supplies for a 1200-watt-hour lithium system on Amazon. I didn’t bother to include every little piece, but I didn’t need to, as the results became clear early on. 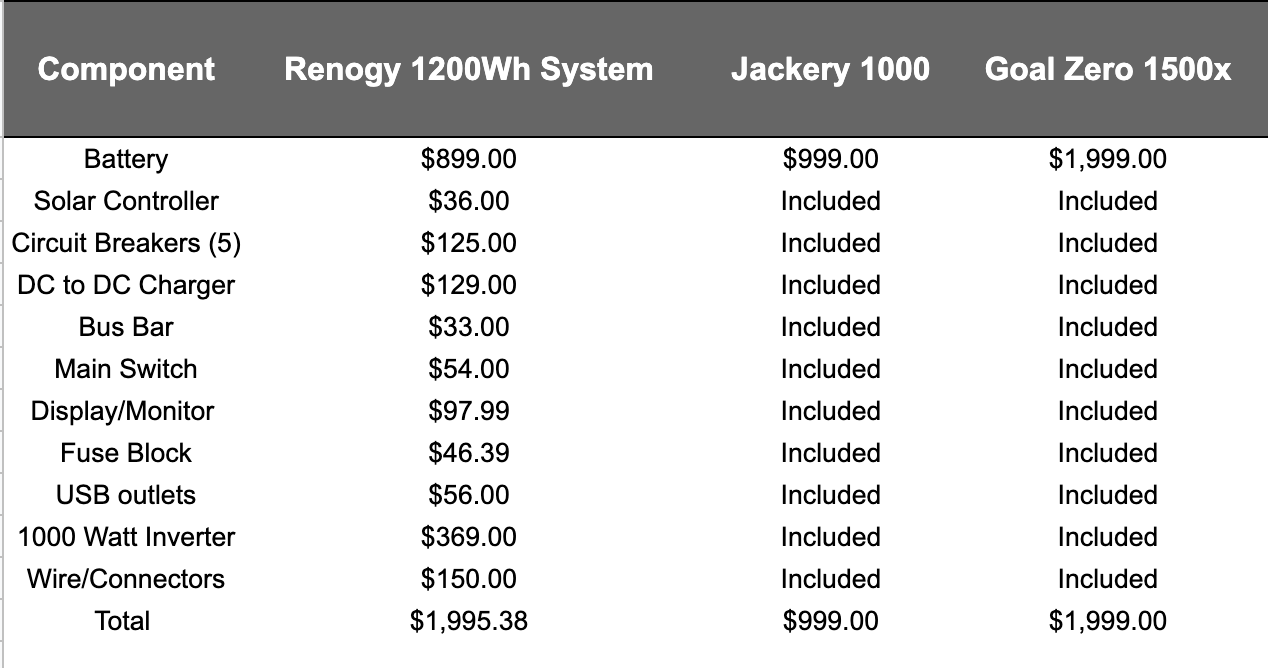 Amazingly, the Jackery came in at less than half the cost of the DIY system, while Goal Zero’s much larger 1500X comes in at roughly the same price as the DIY option. Of course, that’s before the cost of labor or the wire and connections themselves, which I assure you can be substantial.

At this point, you might be feeling like it’s time to close the case on whether or not power packs can compete with dual batteries, but there’s one last factor to consider, and it’s a doozie.

Ironically, the power pack’s greatest strength is also its greatest weakness. Because the entire idea behind the product is to avoid the complexities and risk of wiring things yourself, manufacturers didn’t spend much time addressing the needs of the DIYer. Instead, they tailored their products specifically to charging individual devices through standard 12-volt and 110-volt outlets and set the amp ratings just high enough for each port’s intended use. That way, even if you took the time to cut apart their cables and splice in a fuse block, a fridge would occupy 90 percent of the outlet’s amp-rating, preventing it from running lights or a water pump at the same time. This severely limited their use as dual-battery systems in campers. But recently Anderson connections have appeared on the scene, allowing customers to build outside of their manufacturer’s limited ecosystem and greatly improve performance. 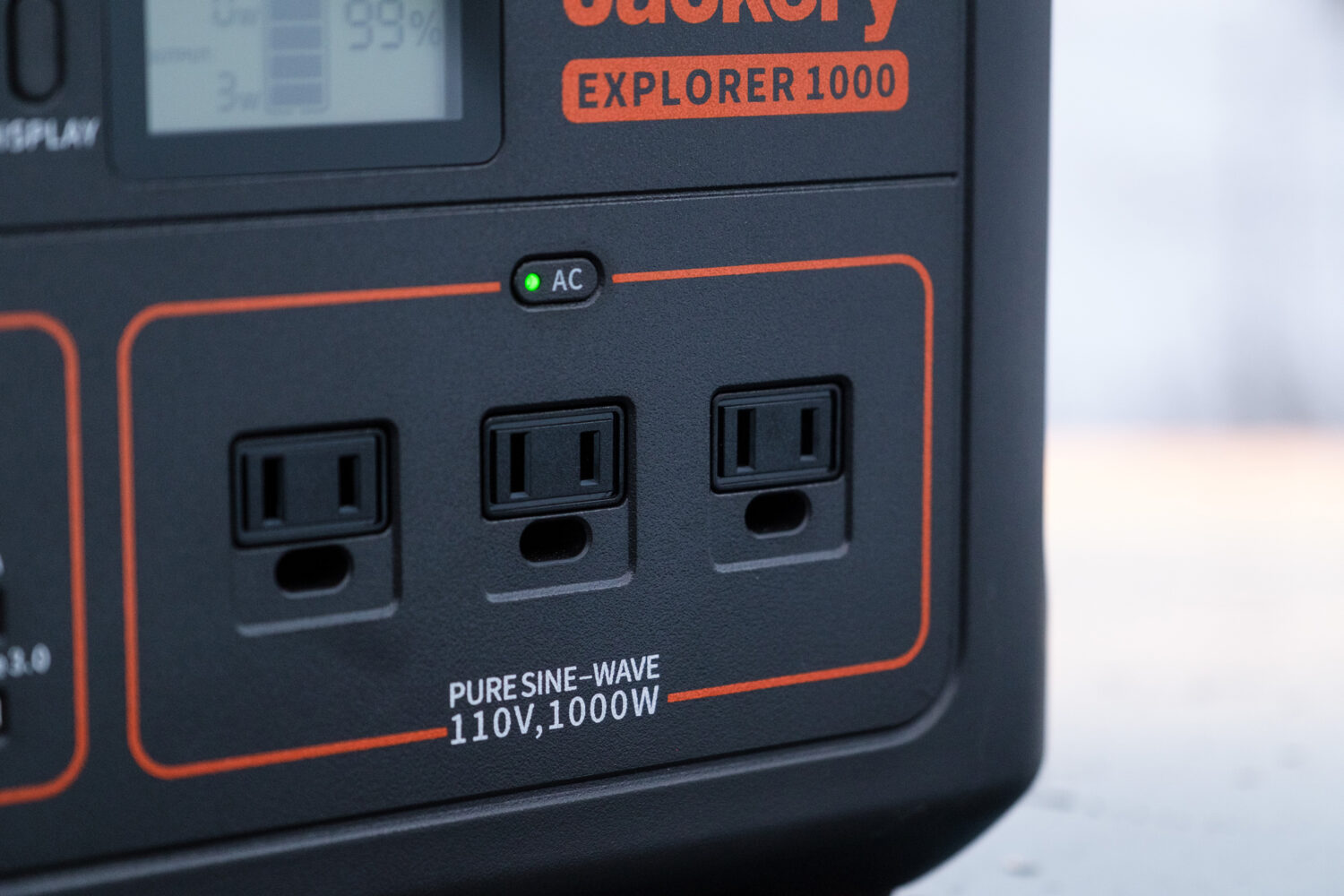 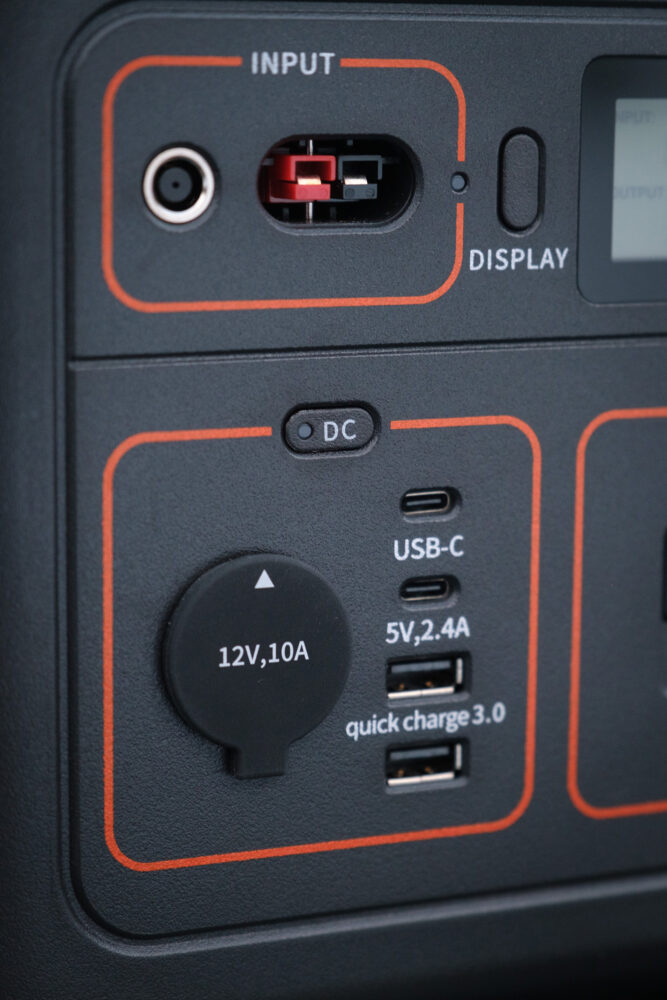 Jackery’s 1000, for example, now features a 12- to 30-volt (163 watts max) Anderson input, which allows customers to charge from a wide array of sources. We’ve seen someone wire this connection to a switch so that whenever their vehicle is driving, the Jackery charges from the alternator, but when the motor is off, it charges from hard-mounted solar panels on the roof. This keeps their Jackery topped up in almost all scenarios. Sadly, the Jackery is still limited to a max output of 10 amps from a 12-volt outlet, though, which means running a camper system isn’t really viable. Goal Zero, on the other hand, may have finally cracked the code.

Their Yeti 1500x offers a 50-amp (600-watt max) Anderson input AND a 12-volt Anderson output offering up to 30 amps of beautiful all-purpose power. That means it’s finally possible to connect an Anderson cable from this power pack to a fuse block in order to run a fridge, water pump, and lights inside your overland rig or van. Simplicity, meet versatility. 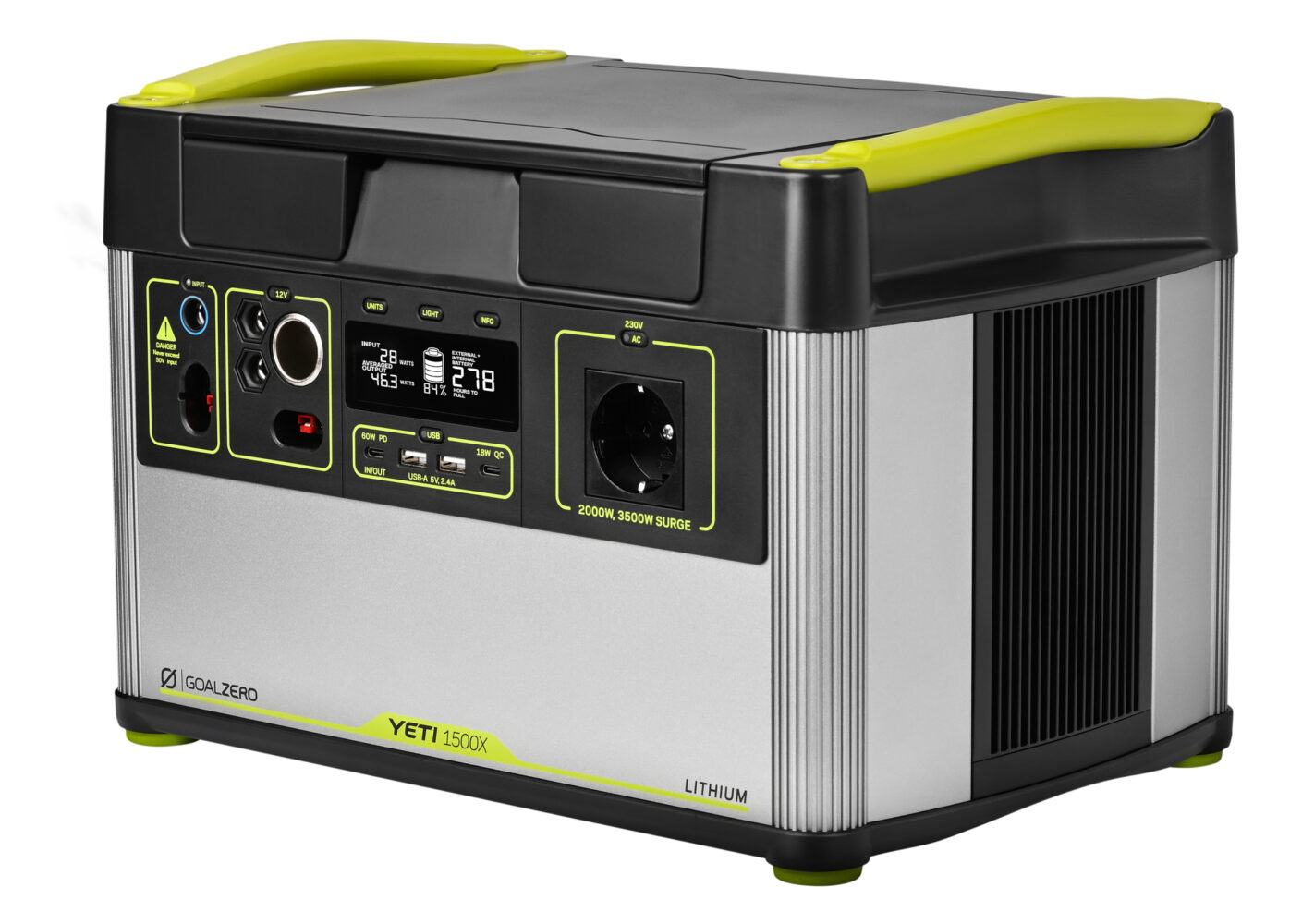 Portable power packs have come a long way from even a few years ago. They’re lighter, more powerful, and more versatile than ever before, and manufacturers like Jackery and Goal Zero continue to push the boundaries of what is possible. Sure, a fully custom power solution is going to afford you more flexibility, but after this test, I finally feel confident in saying that portable power packs will meet the needs of most enthusiasts, especially if they’re the Jackery 1000 or Goal Zero 1500x.

Note: On March 18, Jackery unveiled their new Explorer Line of products. Be sure to check them out, as well as our upcoming head-to-head review of Portable Power Packs in Overland Journal.