Many of us traveling overnight or long distances on motorcycles are going into bear territory; that’s why we love our ADV and dual-sport bikes—to get off main roads and into the backcountry. But what about storing food out of reach from bears while we sleep at night? 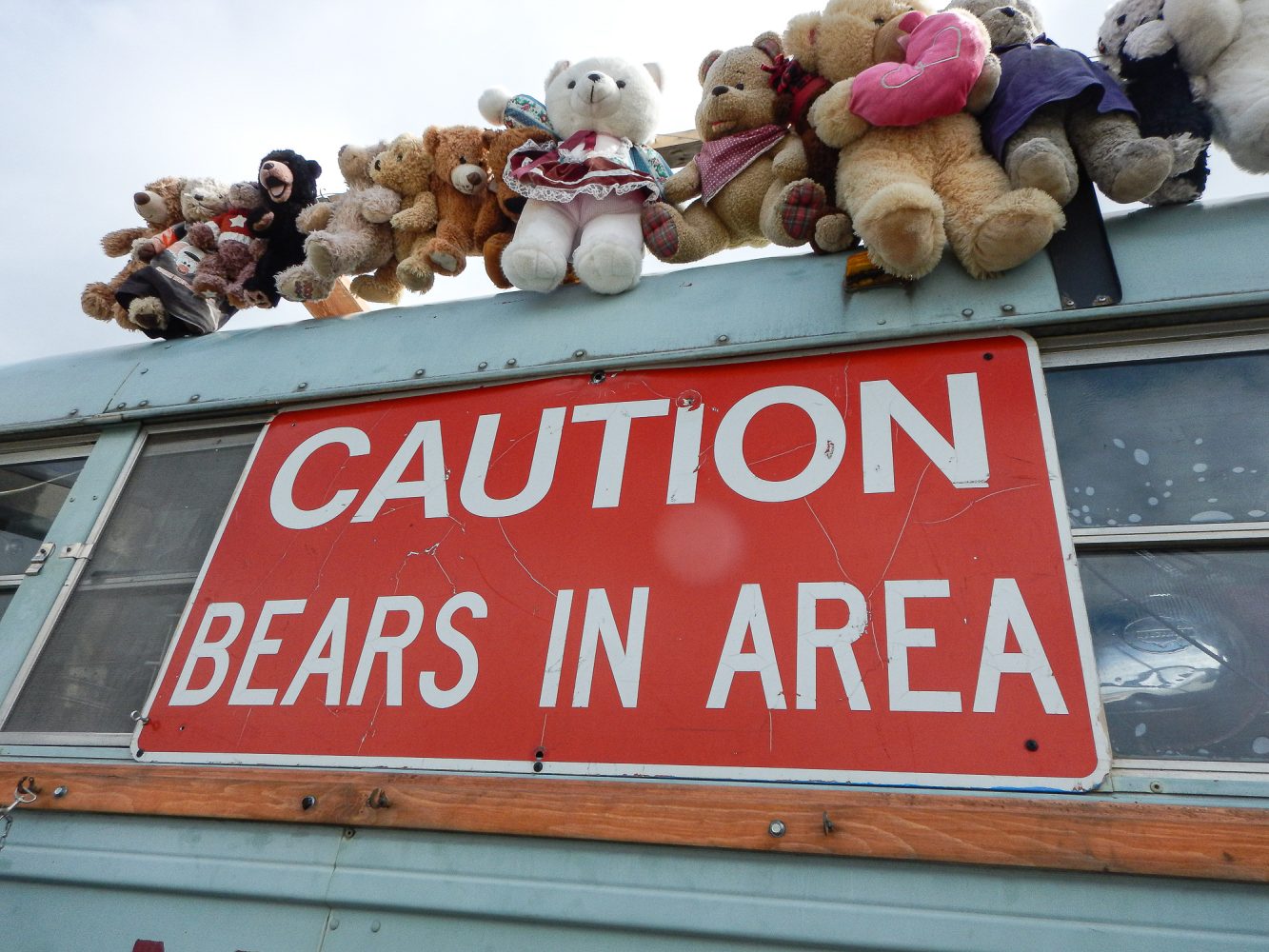 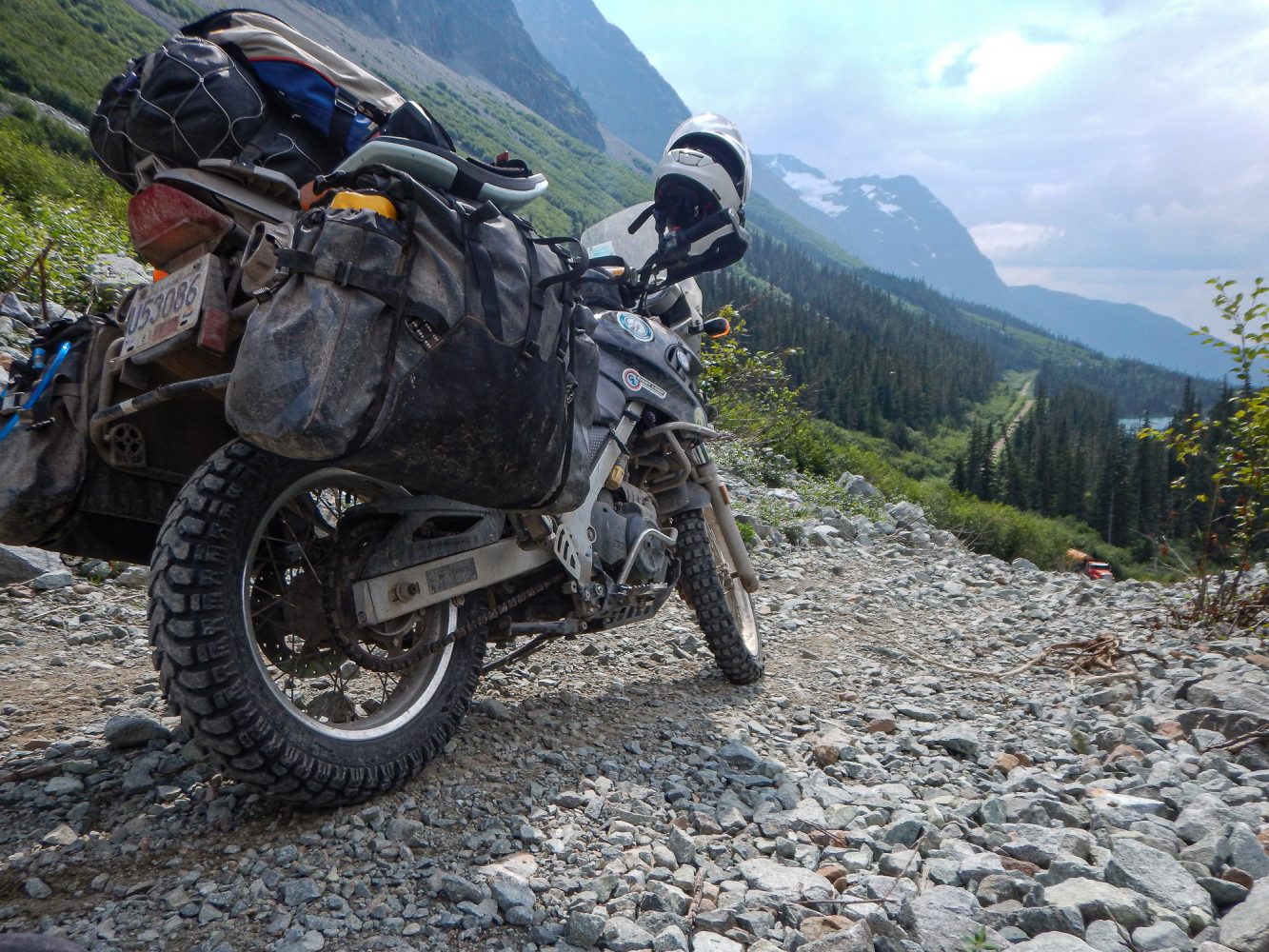 Growing up in the Canadian Rockies, I often heard that a fed bear is a dead bear. When any bear—black, brown, grizzly—has access to human food, they get lazy. Instead of foraging in the forest for healthy berries and bugs, they’ll go after the lower-hanging fruit. In this case, that could be the bag of dehydrated bananas you forgot in your day pack, which you’re now using as a pillow.

Sadly, bears will attack people inside their tents and vehicles just to get to that Snickers bar or shampoo bottle that smells like apples. “Garbage” and other problem bears caught eating people food become a safety concern and are often shot dead. 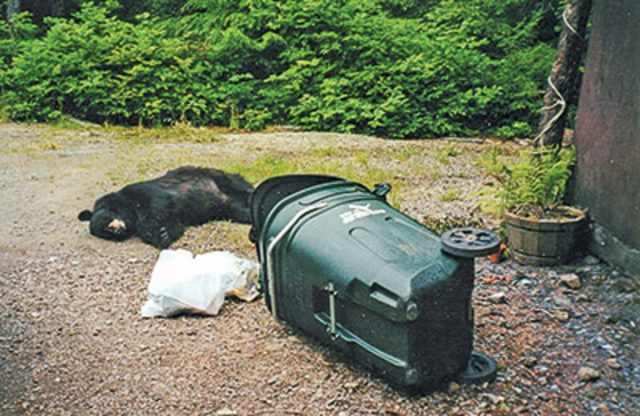 We may think we’re wildlife-aware, but human negligence is often what attracts bears to people and ends up in disaster. An Alaskan friend of mine was once forced into using his rifle to kill a grizzly that went after his water bottle in camp and wouldn’t leave. The bottle was empty but for a few drops of water with an electrolyte mix. Even a sealed drink container can be sniffed out.

In another example, one rider sent me a photo of his panniers destroyed after he kept food in them overnight. He was camping in a Colorado park that had bear bins sitting in the parking lot, but he didn’t have the budget to install them. You can’t always rely on outside resources to help keep things bear-safe.

Even if you’re traveling with a vehicle and can store odorous items inside, that may not be good enough. Bears are known for breaking into cars too. Always lock vehicles overnight in bear country.

When my husband and I rode to the Yukon and Alaska, we saw signs of black and brown bears almost daily, mostly in the form of fresh, steaming bear scat. 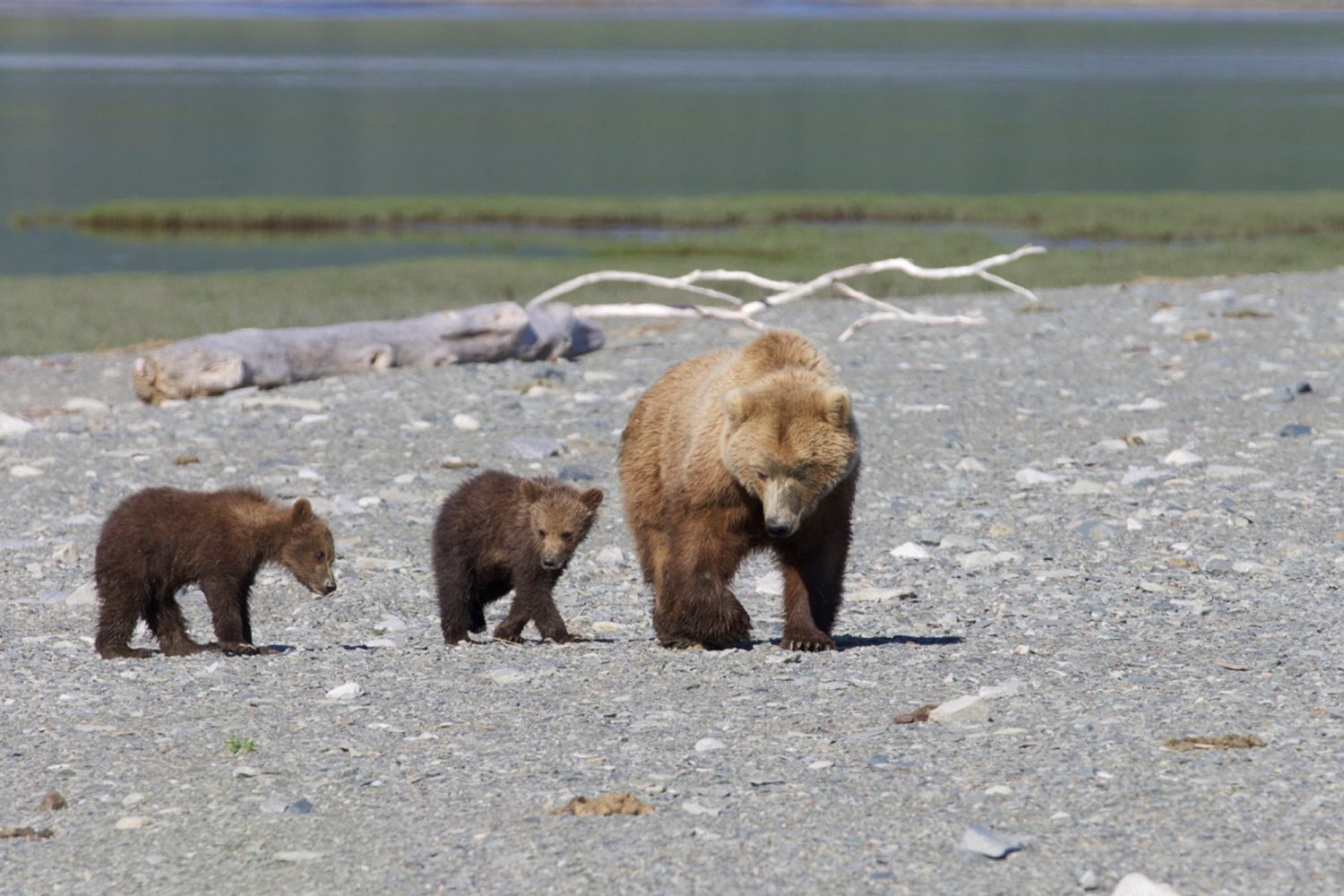 Sleeping in a tent surrounded by nothing but two motorcycles and miles of treeless tundra felt pretty vulnerable. 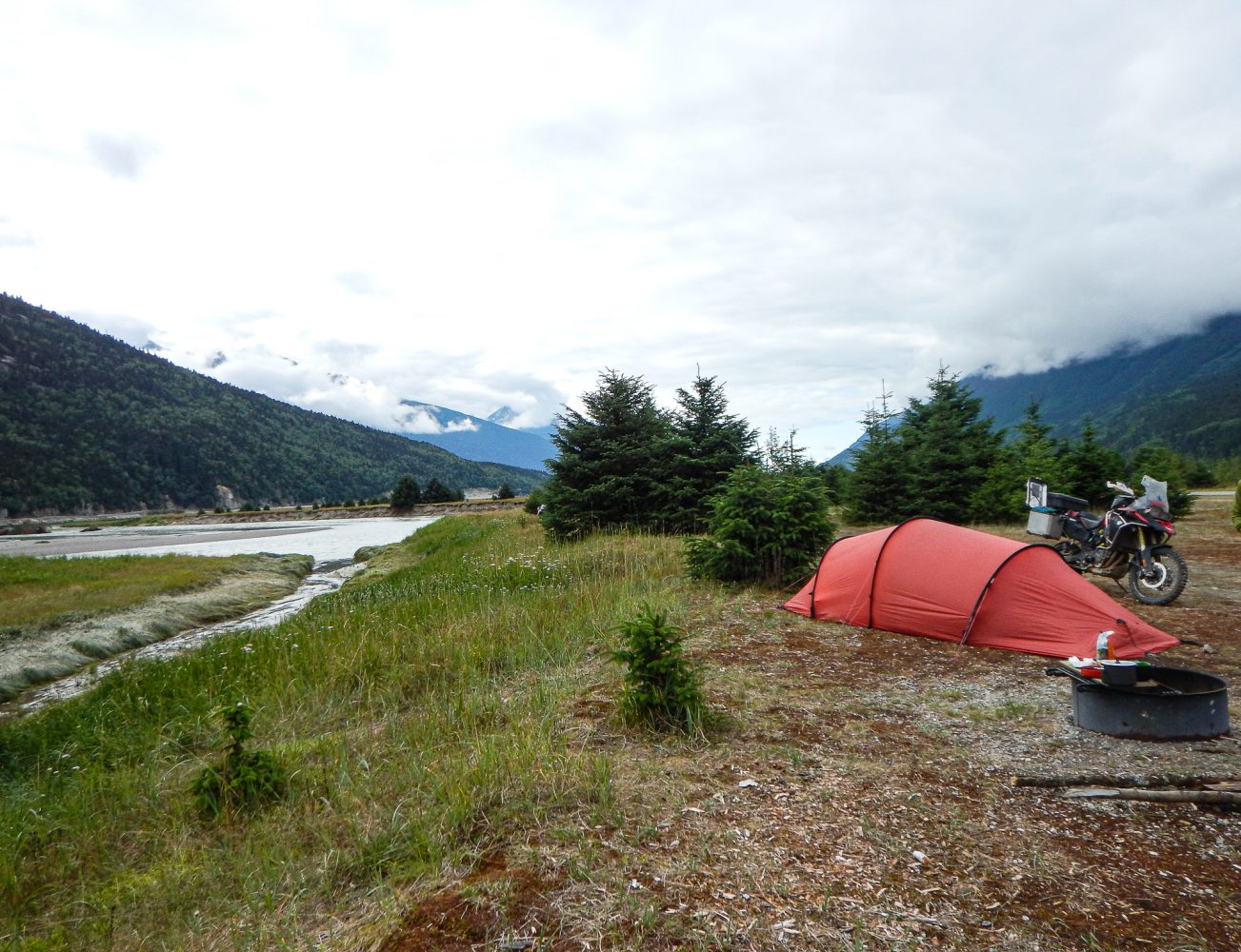 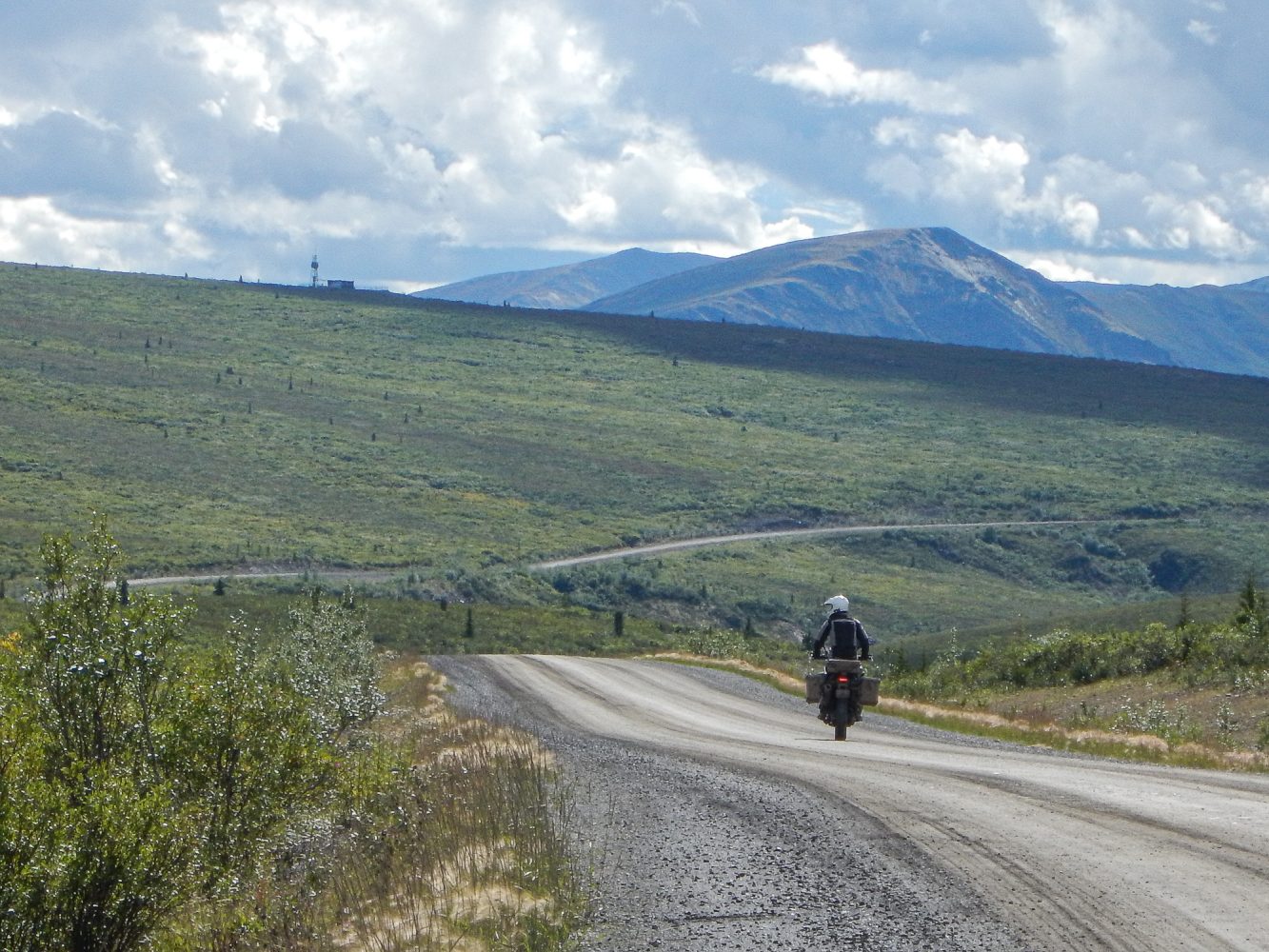 I’d lie awake most nights, alert to every noise. After a terrifying encounter a few years prior, where I was chased by a grizzly while hiking one day, I’m on edge in bear country. I do everything I can to not attract them. I don’t cover myself in sweet-smelling sunscreens and lotions and even spit out my toothpaste a good distance away from where we’re sleeping. I also walk far from my tent to use the bathroom. And, of course, I ask my husband and anyone I’m camping with to do the same.

It’s not just about our protection, though, but the bear’s as well.

Most paid campgrounds in bear country have bear bins or secure lockers where you can store food and other smelly items. Sometimes the containers are located right in the campsite, which makes it tough to keep your tent far away from any food smells. Other campgrounds will have large bins near a cook shelter, so meal prep is all in one place and away from sleeping quarters. These bins are the most convenient bear storage out there and mean you don’t have to carry anything extra on your bike. But what if the bins are full or you’re wild camping? 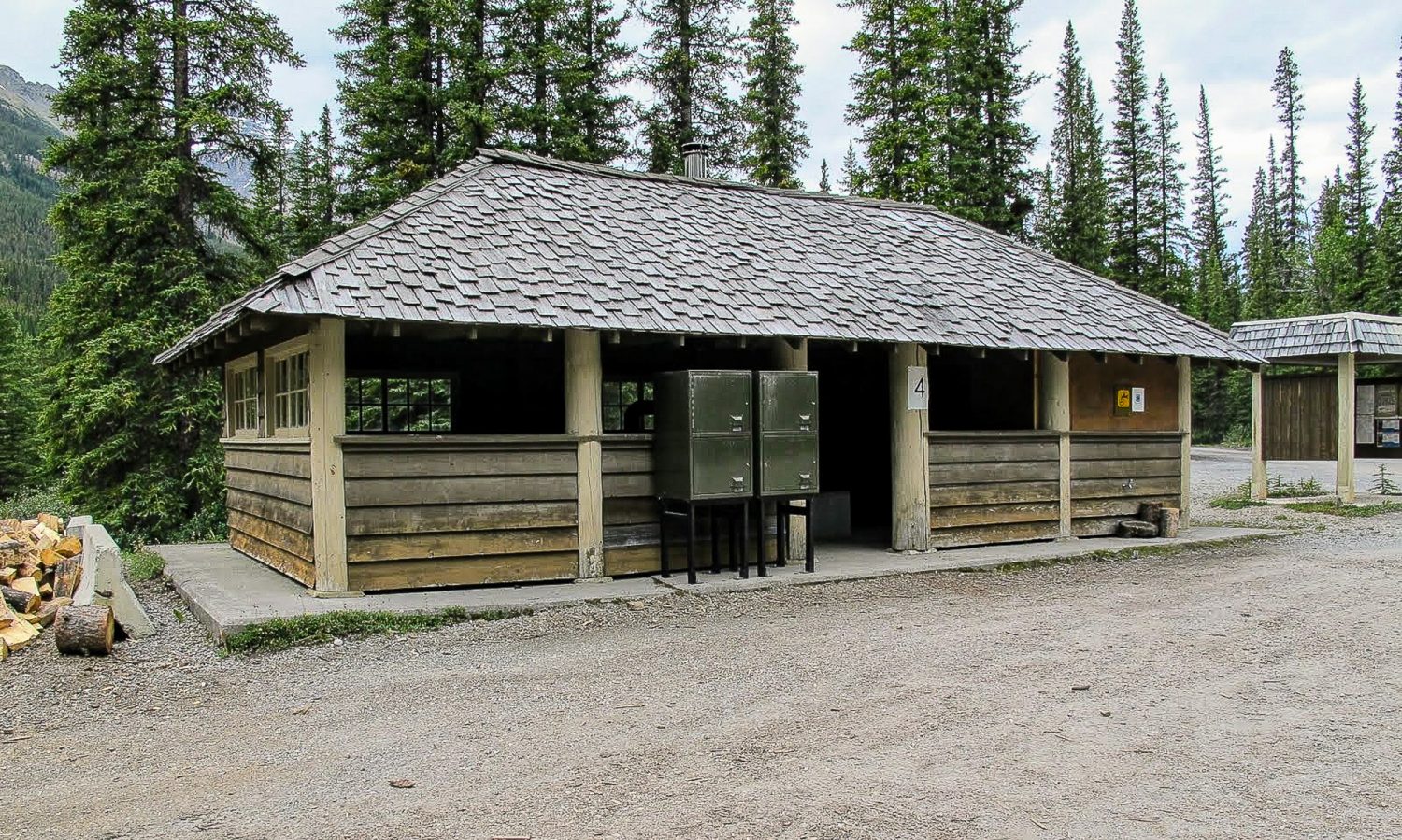 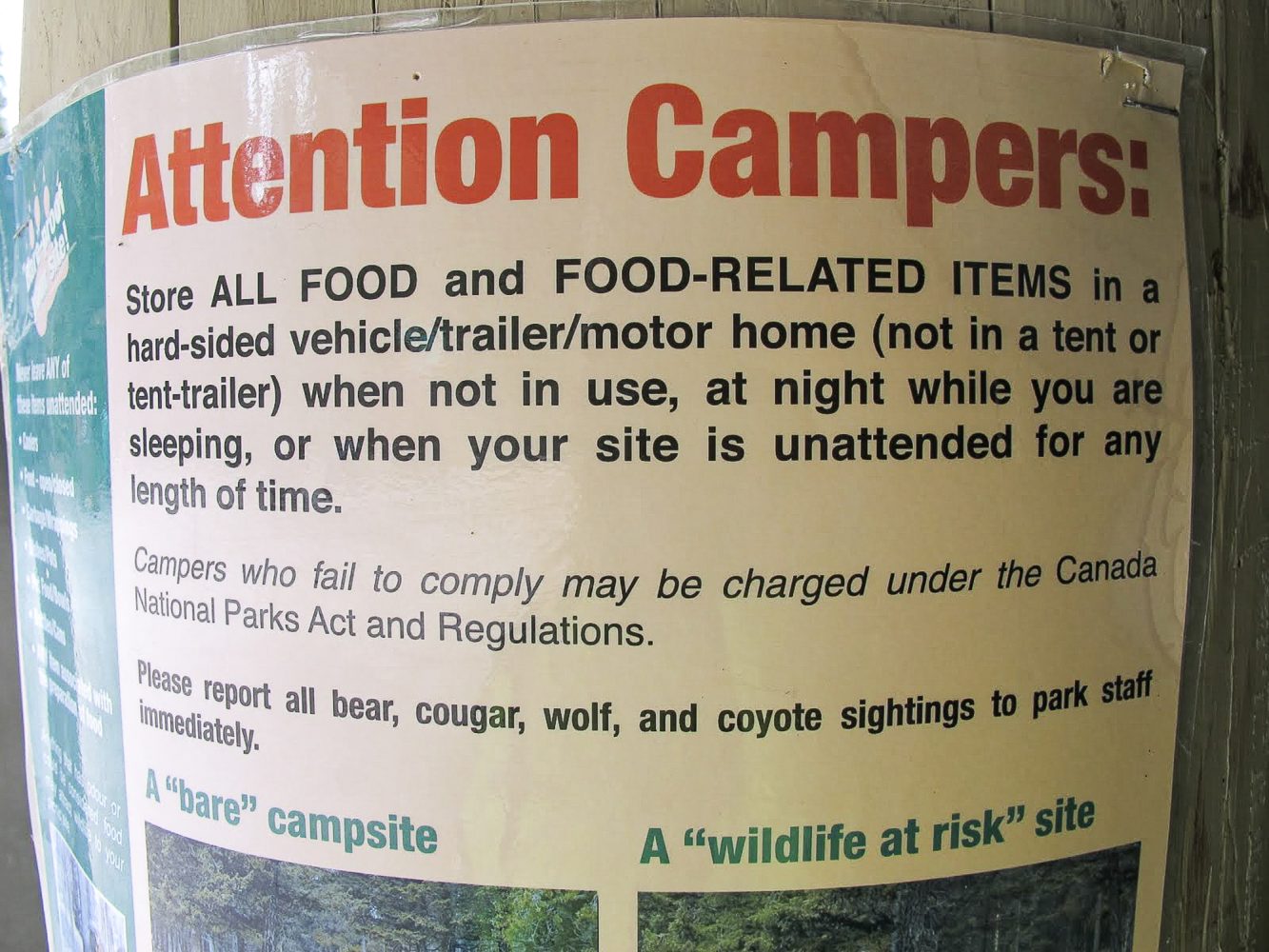 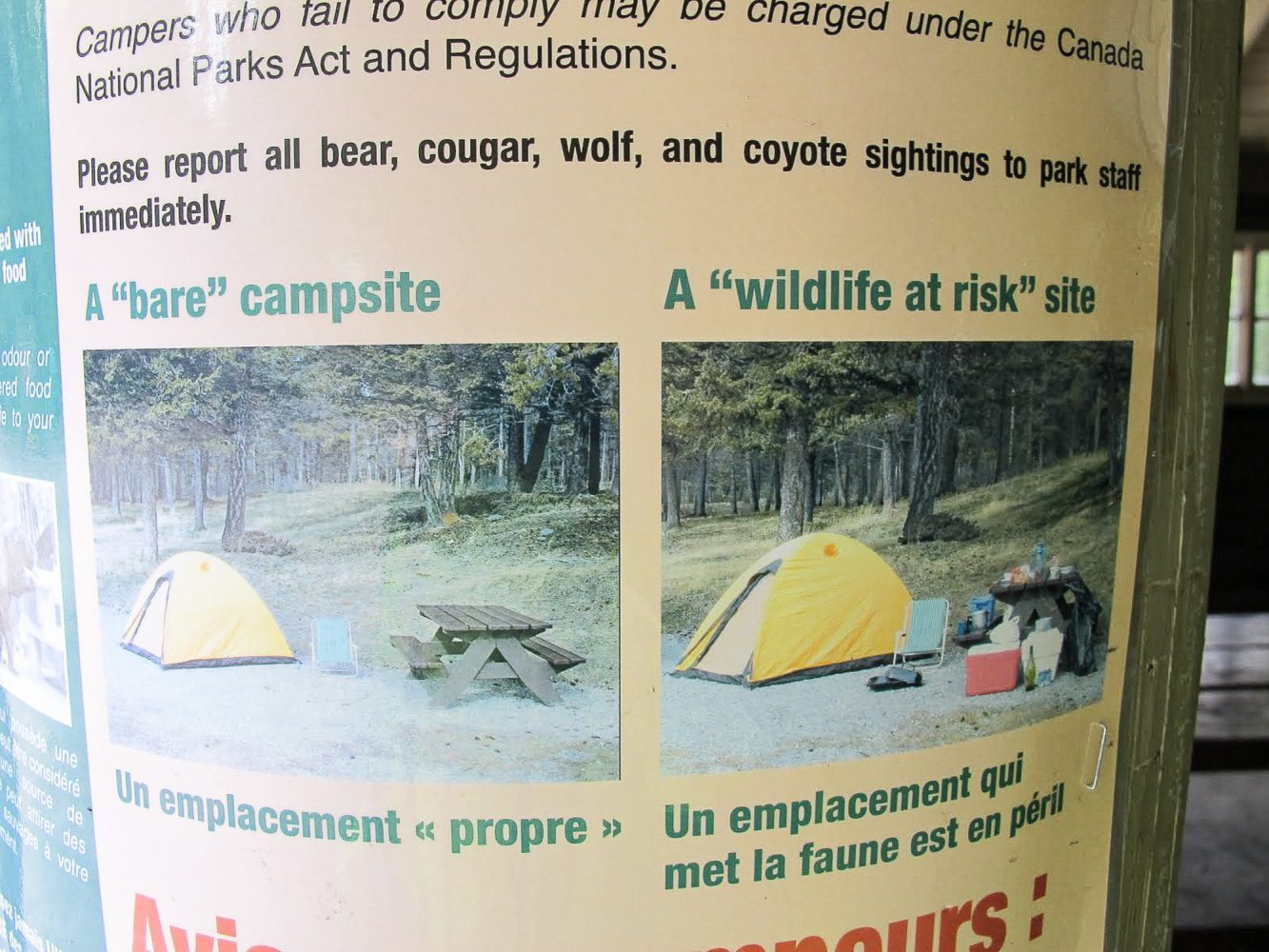 A Rope and a Tree

A cost-effective, space-saving method is carrying a rope and a bag that fits all your food and toiletries. A rope length of approximately 40-60 feet will be enough. You can get strong, abrasive-resistant string or cord from your local outdoor store, REI, MEC, or other online sources. The rope should be 5 to 7 millimeters thick. Salespeople can usually cut a custom length from a spool for you. Consider how much weight you may need to hoist into a tree and that you could find yourself helping out non-bear-aware campers with food storage. You’d be surprised how much a bag of canned food weighs. 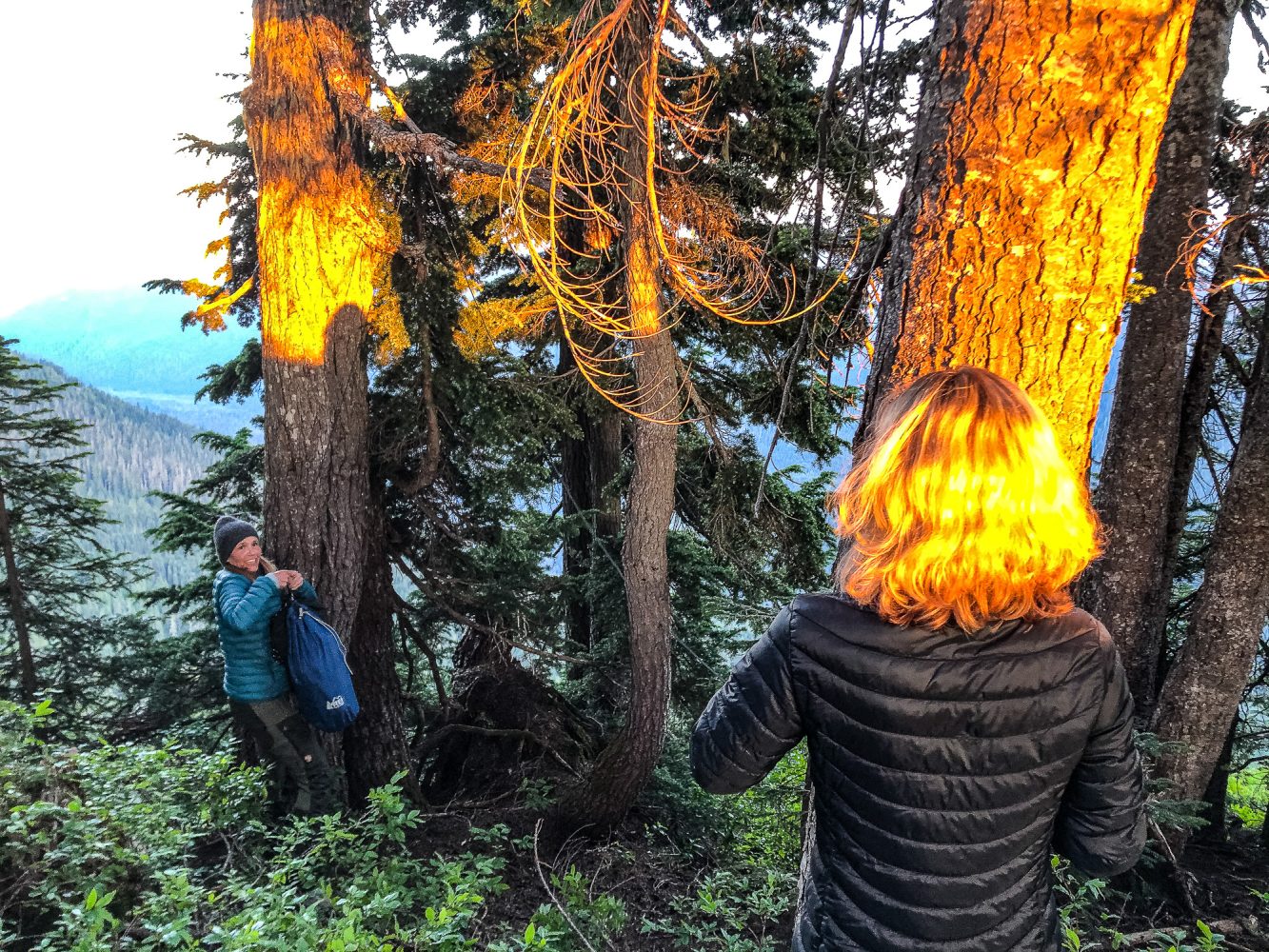 The hanging method only works in talltrees with a thick branch that sticks way out, so the bag free hangs high enough off the ground. Bears can be taller than 7 feet and walk on two legs. Choose your branch wisely—most bears, even grizzlies, are excellent at climbing trees. Ideally, your chosen branch is strong enough to hold 20-30 pounds of food but will break if a 400-pound black bear tries a trapeze act. In the end, though, the bear still gets the bag down.

Also, note this method isn’t always environmental as it can damage trees.

The bag itself can just be a stuff-sack you use to compact your sleeping bag or any other bag that can be closed tight.

But a specific bear bag will be made of tougher fabric, which, when you’re hauling several pounds of food up a tree trunk and over branches, will make a difference. Nothing’s worse than finally slinging a tree branch (no easy task) and ripping the bag open, so all your stuff crashes to the ground.

This is a reliable bag I’ve used. You can also search “bear-proof bags” online.

In the absence of tall trees or bear bins, there are bear canisters. These are usually made from hard-shell plastic and have lids that can only be opened with opposable thumbs, a coin, or screwdriver. Canisters can also be kept on the ground instead of hanging them. Their round, featureless design makes it more or less impossible for a bear to grip on to—it just spins continuously. Product research shows bears usually get bored with something so complicated and wander off. You should still store the vault a good distance from your campsite.

The downside with this method is you have to take it everywhere with you. Riders who camp rarely have extra space on a motorcycle for bear-proof canisters, which can be roughly the size of a full-face helmet or larger.

Riding in the north—where we did a lot of wild camping, but trees are sparse and stubby—I dedicated one of my soft-sided panniers for this USA-made bear vault. Although cumbersome and annoying to pack on and off the bike, the vault was an ideal solution for food storage and toiletries. I’d usually cram the most potent stuff inside, though space was an issue, even though I bought the larger container. Anything leftover, I’d secure in my panniers. Where possible, both the bikes and the vault were parked a good distance from our tent.

Search bear-proof food storage online, and you’ll get a variety of products available. 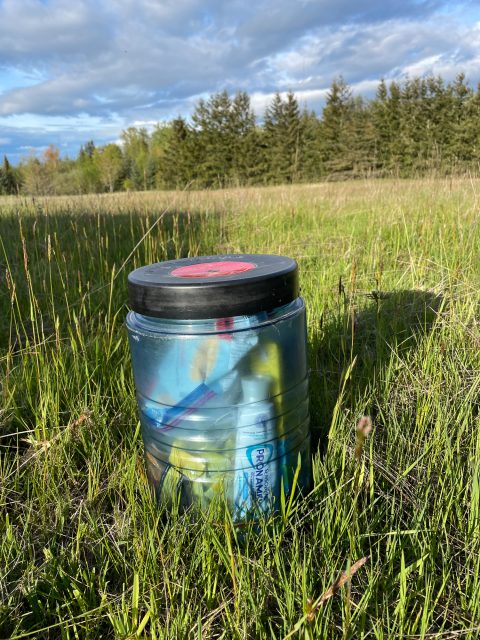 It sounds like overkill, but tell that to your over-active amygdala when you hear a twig snap in the night. Electric fences for campers are fairly low volume for carrying on a bike and can not only keep bears completely away but help you sleep—important on a riding holiday. They are designed to circle your tent on posts set into the ground. Electric bear fences are widely used in places like Alaska’s McNeil River. 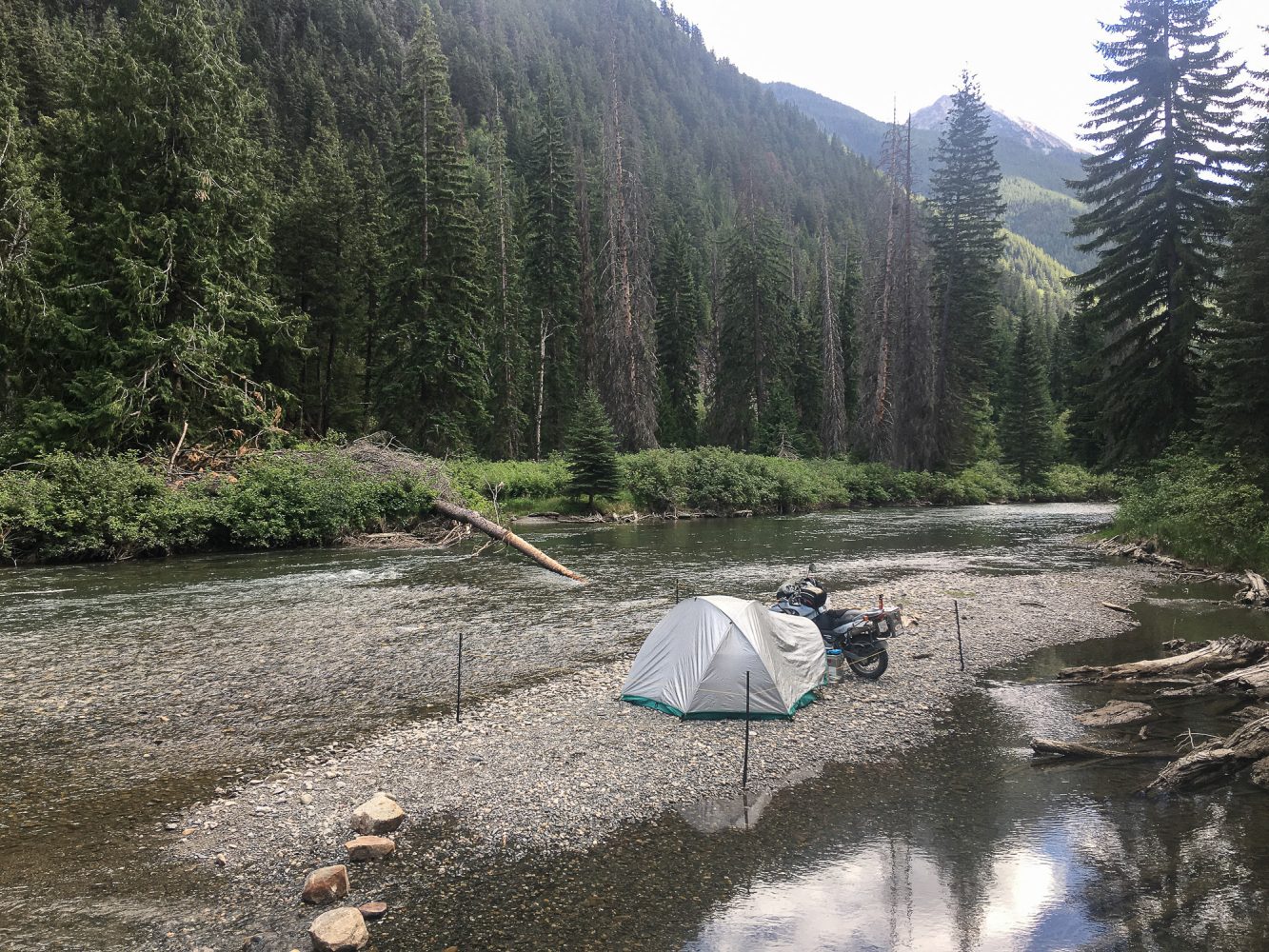 You can shoot a bear to defend yourself and your property, but the legalities are a little vague around self-defense, especially if you were negligent about proper food storage. Be sure to check the rules and regulations in the areas you plan to camp. Sleeping with a weapon may not be as foolproof as you hope. Carry bear spray instead. 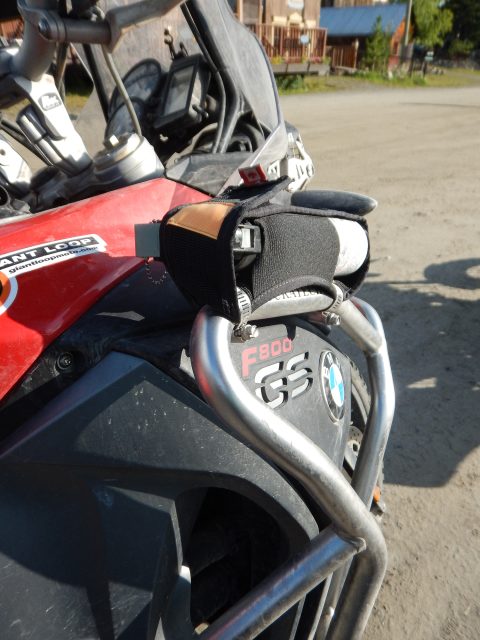 This spicy spray is directed toward the bear’s face and will shock them into running away. At the very least, it’ll buy you some time to put on your running shoes and toss your friend’s shoes in a tree.

(Except never run from a bear.)

Sometimes, you may be near a building or a bridge where you can improvise bear-proof storage. 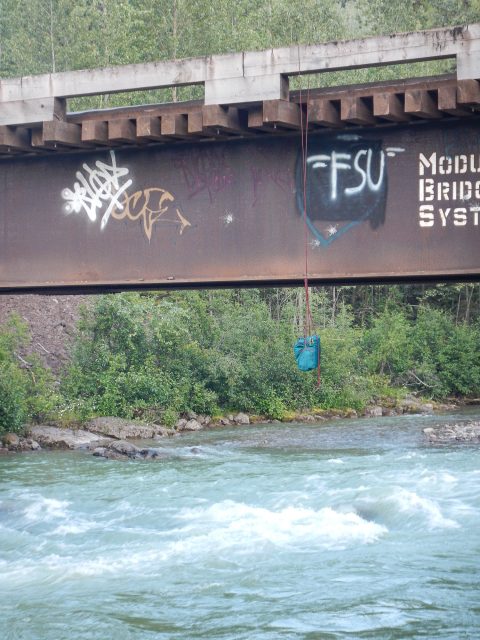 I know it sounds disgusting, but I once used an outhouse for food storage. We put our bags in there and put a thick stick through the padlock hook and a bunch of rocks in front of the door. A determined bear could have gotten in, but the outhouse was all we had available and was far from our camp.

More Bear-aware Tips for Around Camp:

What are your bear-proof storage solutions/stories? Let us know in the comments below.