This 36-Hours of Adventure is presented by Nimbl Vehicles. Nimbl also provided a loan of their Evolution camper, which we used for this journey.

Curiously, one of the last significant unexplored regions of North America was the Sierra Pinacate, a vast desert of lava and sand stretching from Southern Arizona to the Sea of Cortez. That map was not filled in until 1907. In the centuries prior, mapmakers were creative with the blank spaces on the map, oceans filled with multi-headed sea creatures, and markings for lands of the Amazons. Was it just horror vacui or the exaggerated tales of distant lands that inspired the cartographers of the day? Here be dragons!

“Now when I was a little chap I had a passion for maps. I would look for hours at South America, or Africa, or Australia and lose myself in all the glories of exploration. At that time there were many blank spaces on the earth and when I saw one that looked particularly inviting on a map (but they all look that) I would put my finger on it and say: When I grow up I will go there.” –Joseph Conrad, Heart of Darkness 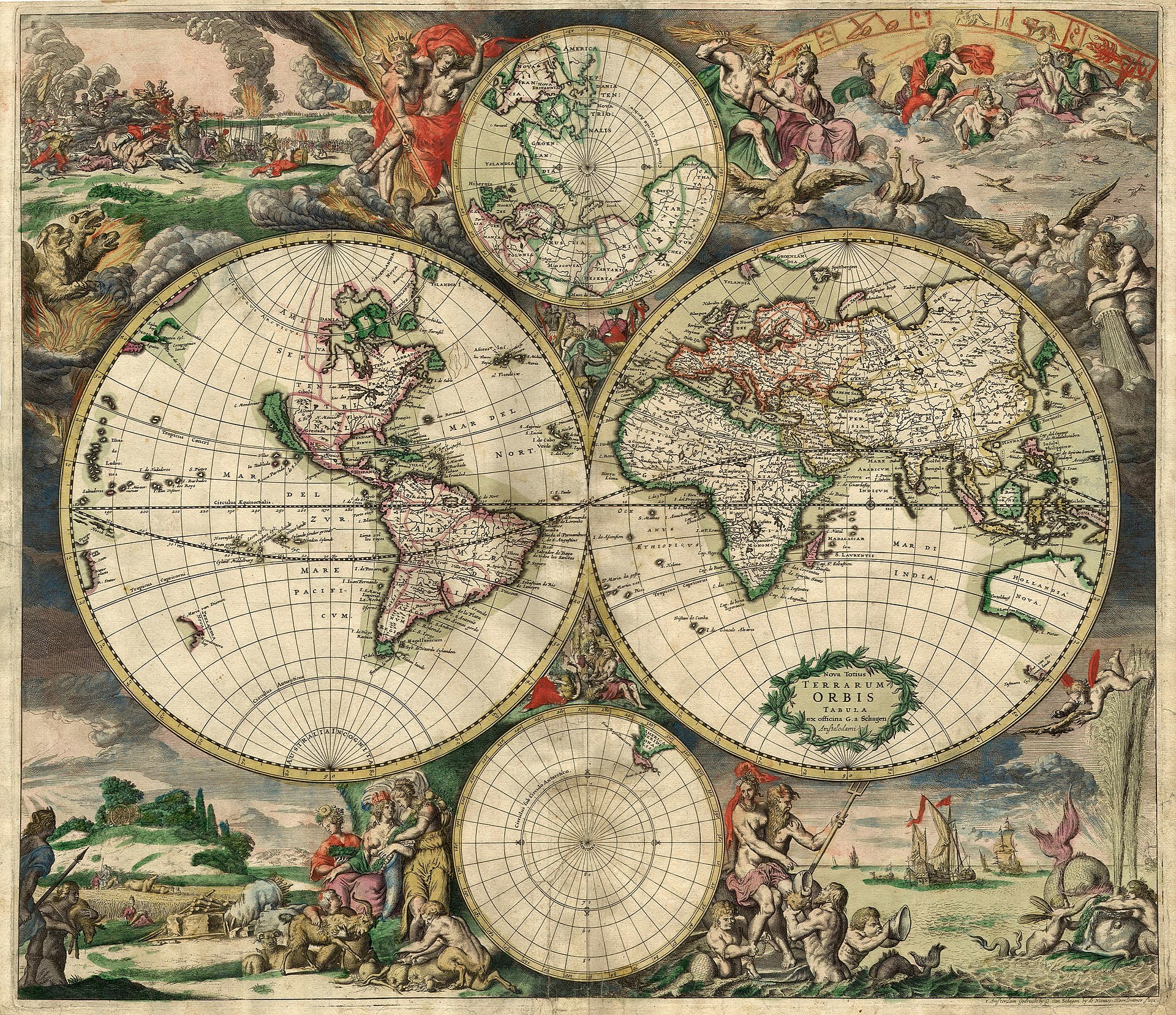 It wasn’t until 1820 that humans set eyes on Antarctica, but terra incognita reduced rapidly from that point, culminating with the launch of satellites for the landsat program in 1972. Even as I write this, planets are being mapped, and the far reaches of the universe are unfolding to new technology and the arrival of ancient light that reveals it.

Despite the mapping and knowledge that has closed the gaps, and unfortunately, revealed that dragons (most likely) do not exist, we all have our blank spaces of exploration and our own terra incognita that occupies our daydreams as travelers. For me, one of those places was the Black Rock Desert and the Calico Mountains of northern Nevada, certainly a remote place in the continental USA by any standard. 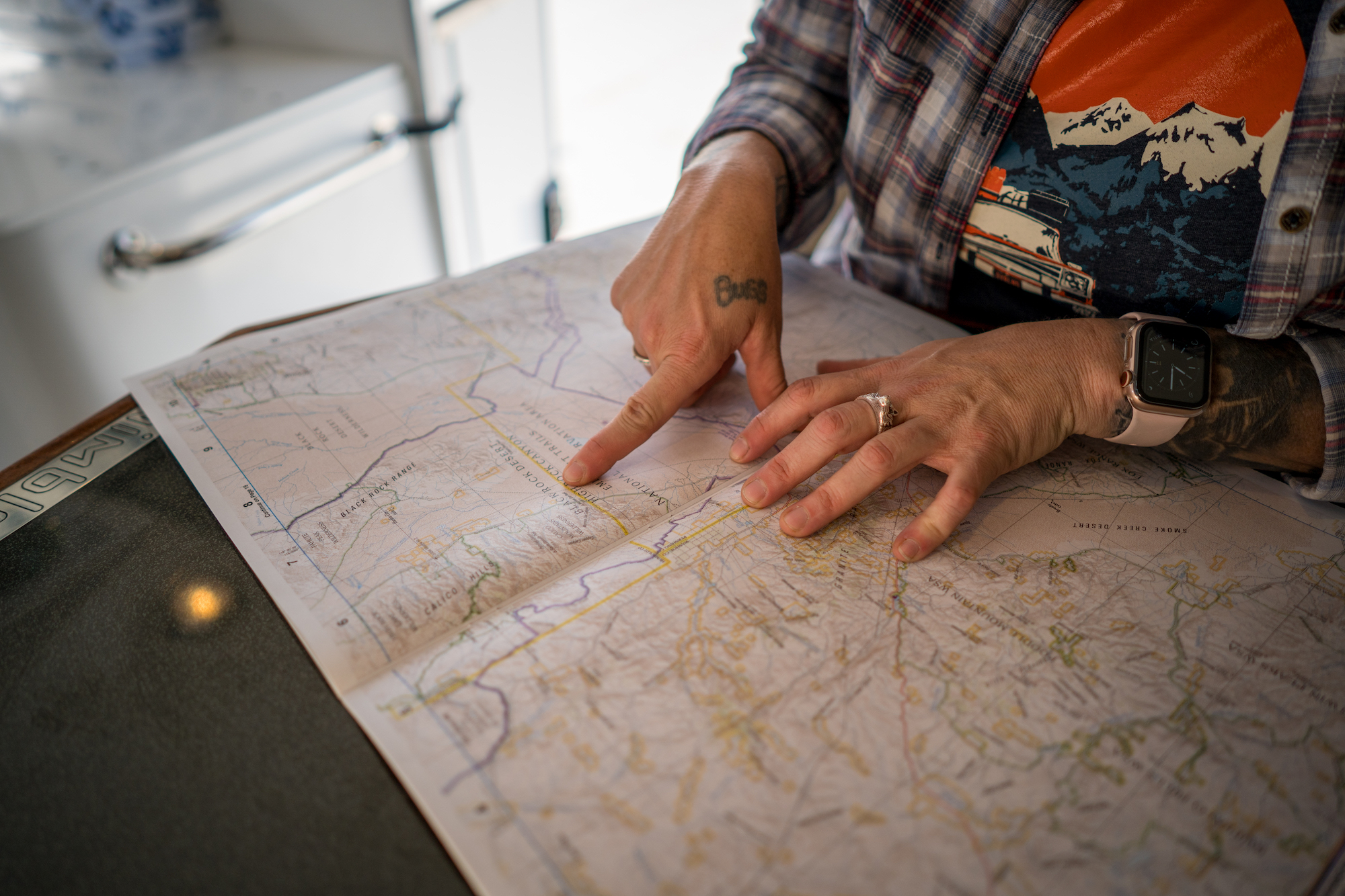 Great journeys benefit greatly from having friends along for the ride. For this trip, I was lucky to have some of our team with me, including Paula Burr (producer of the Overland Journal Podcast) and Ryan Keegan (our Director of Videography). We pored over maps before, during, and after our adventure.

I had arranged to drive the new Nimbl Evolution camper on the journey, which would include the rugged 4WD road from Jackass Flats over to Black Canyon. The goal was multiple nights of camping and allowing terra incognita to create new memories and photographs exploring a beautiful and rarely visited corner of Nevada.

Just getting to the outpost of Gerlach and the start of the Black Rock Playa took a notable amount of time, requiring hours of driving from the Nimbl facility in Colfax, California. But despite the distance, even the highway drive was beautiful, the High Sierra revealing azure lakes surrounded by granite cliffs. The Eastern Sierra gave way to high desert and carpets of sage, dotted with greasewood and juniper. Geologic features slowed our progress, each new wonder causing us to pull off the highway and meander about. One particular site near Pyramid Lake included tufas with blooming thinolite crystals. They looked more extra than terrestrial.

We continued north to the outpost of Gerlach, which claims to have 107 residents, but it looked to have been missing 105 of them. There were a refueling station and about a dozen RV storage lots housing the various transportation creations of the Burning Man attendees. I do not remember much beyond that, as I was excited to encroach upon the playa and make camp for the evening. 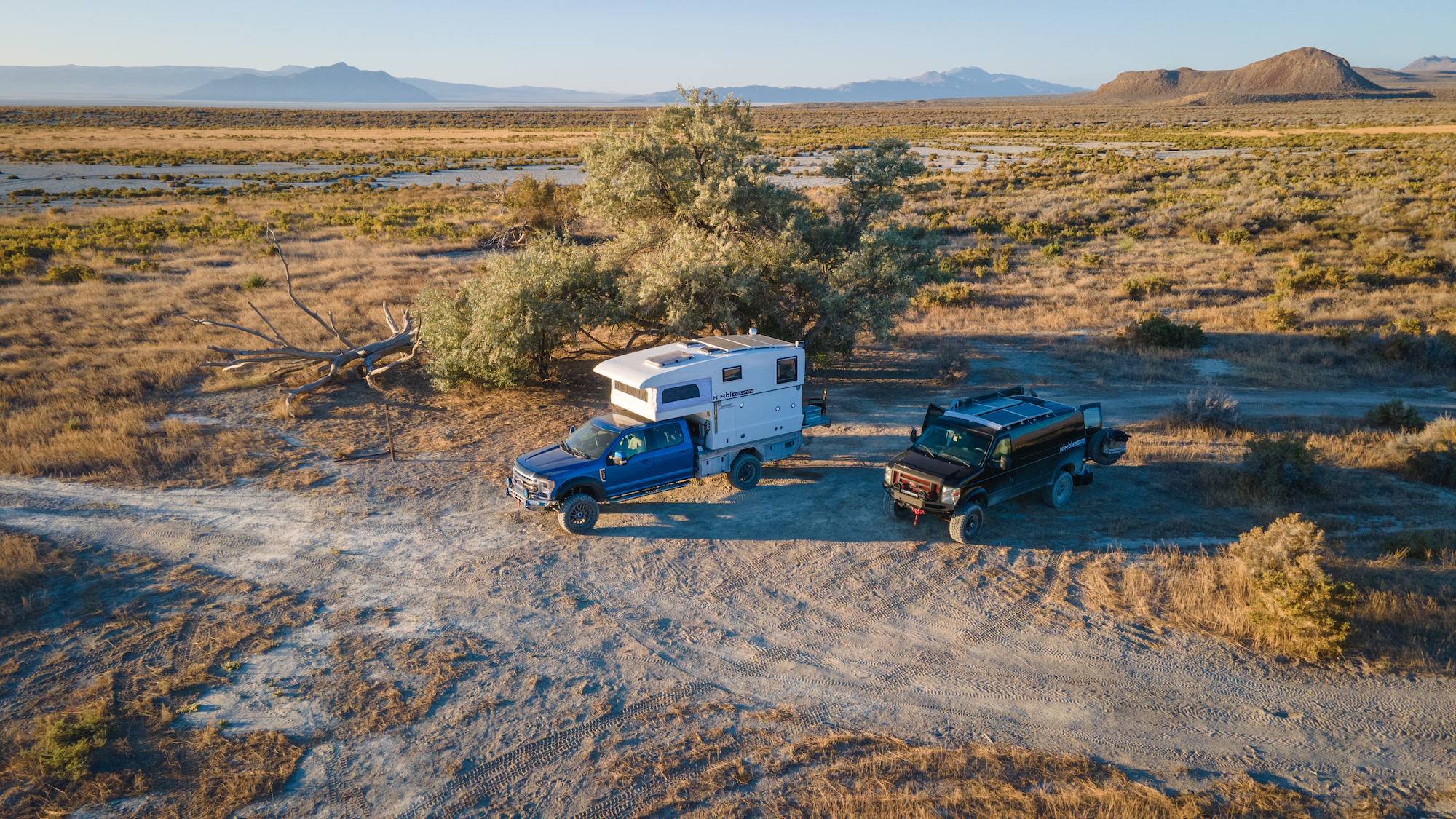 We camped the first night at the edge of the playa and awoke to a stunning display of warm light across the sea of sagebrush.

The Black Rock Playa still looks like a blank space on the map, a 100-mile-long (mostly) dry lake bed that appeals genuinely to my love for the deserts. The playa is also home to Burning Man and numerous eclectic events of various sizes and peculiarity. It is places like the Black Rock Playa that inspire the desire to explore and my love for overlanding. 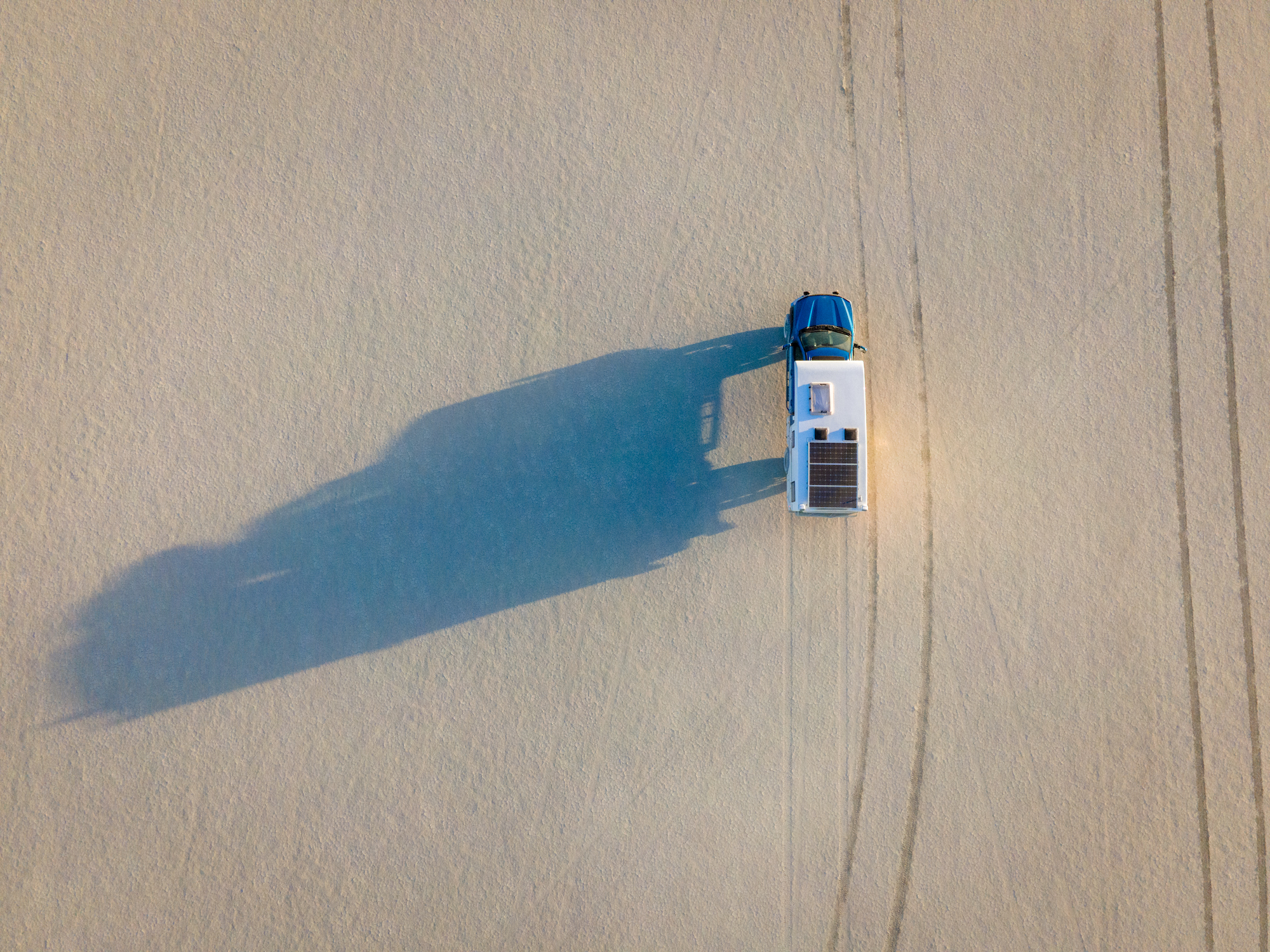 After breaking camp from night one, we shifted the F-350 into low range and climbed up the steep slopes of the Calico Hills, stopping to explore the abandoned cabin at Sheep Springs, a monument to the hardy souls that braved this desert landscape. 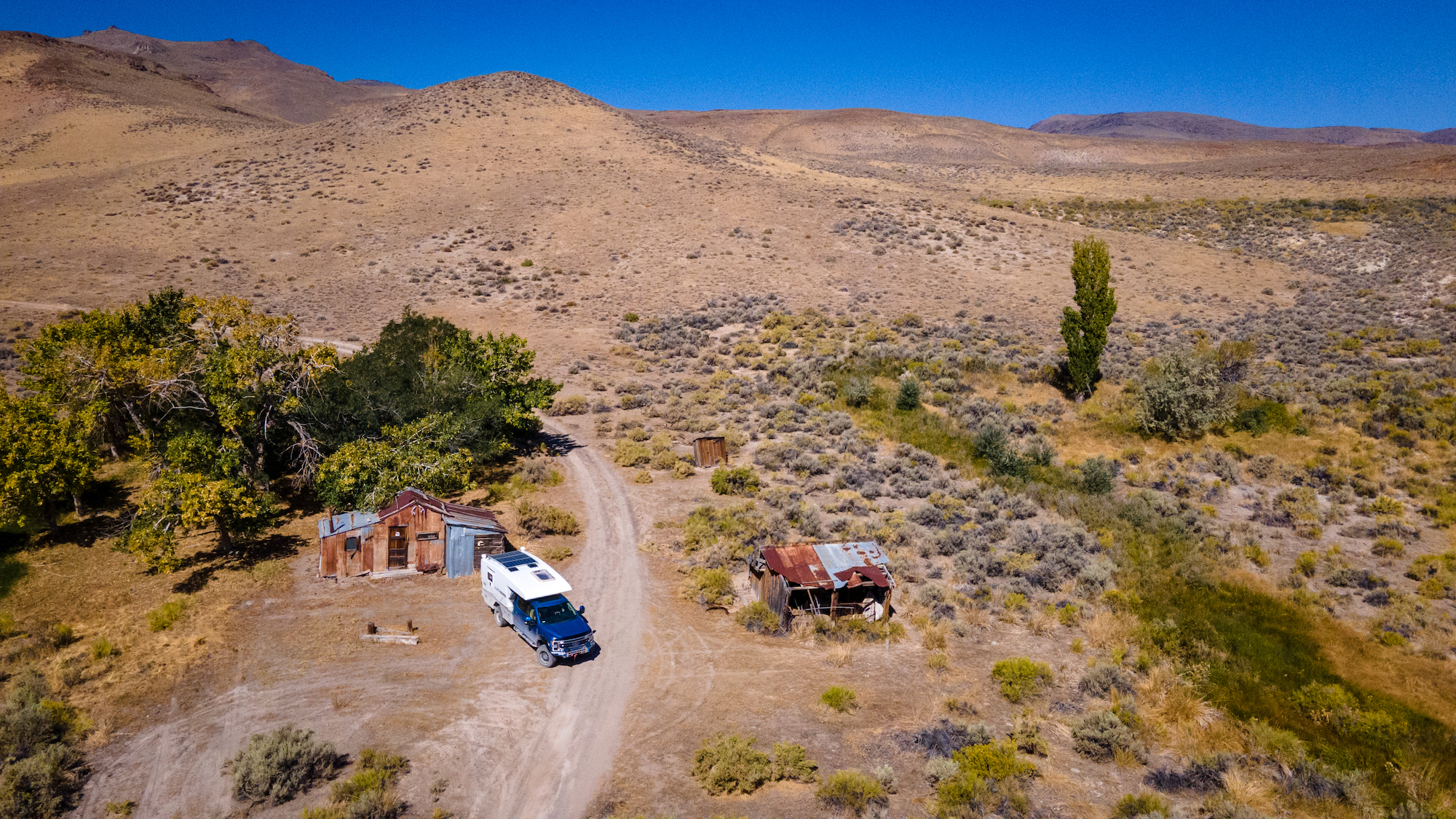 Life in this desert landscape is mostly supported by seeps and springs that dot the hillsides, providing a reliable source of water for livestock and settlers.

From Sheep Spring, the trail narrowed and became more challenging, threading the corridor allotted to the track as it passes through the wilderness area. 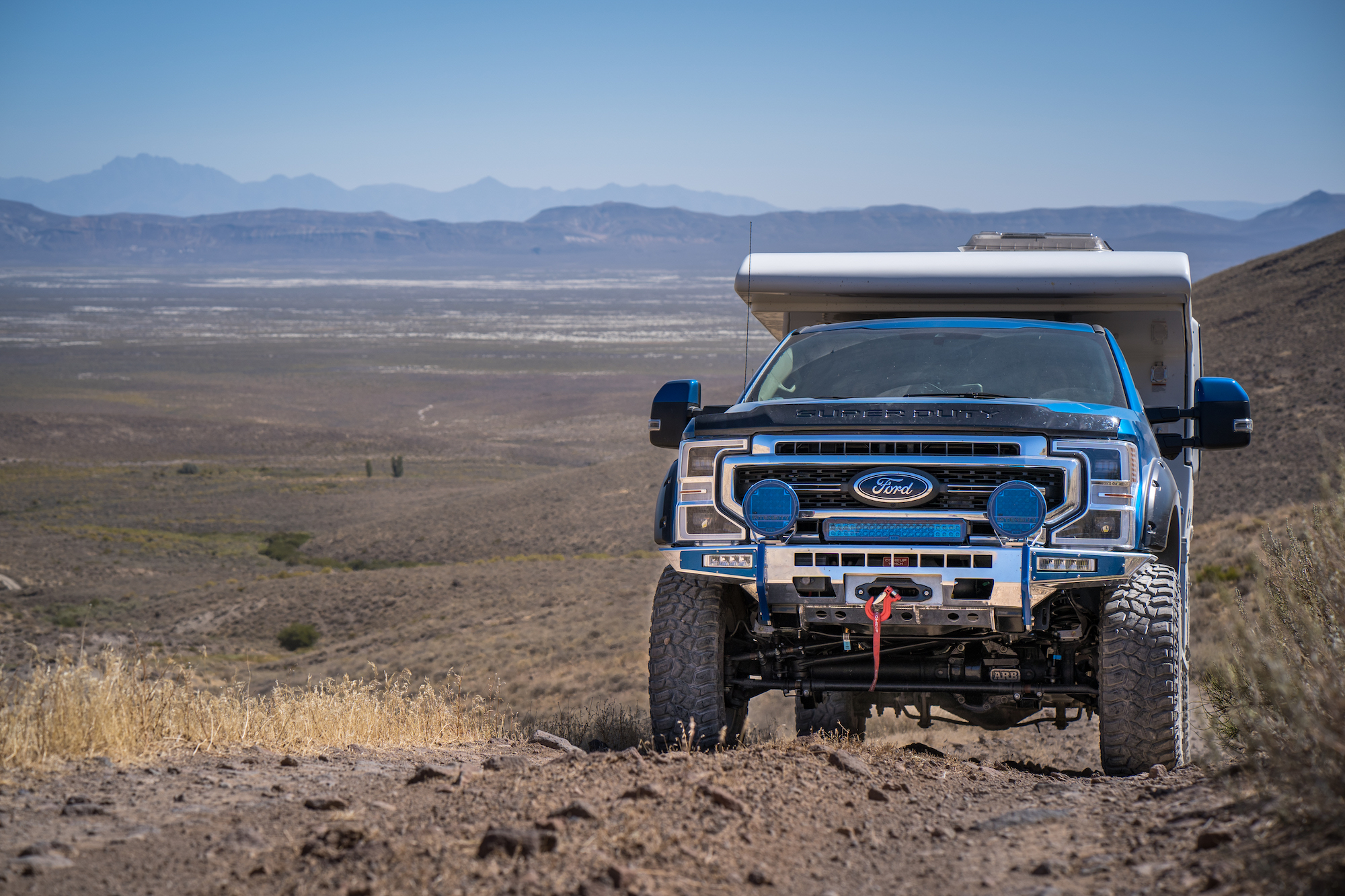 It is important to have a durable vehicle with sufficient ground clearance and traction to cope with the loose climbs through the Calico Hills. 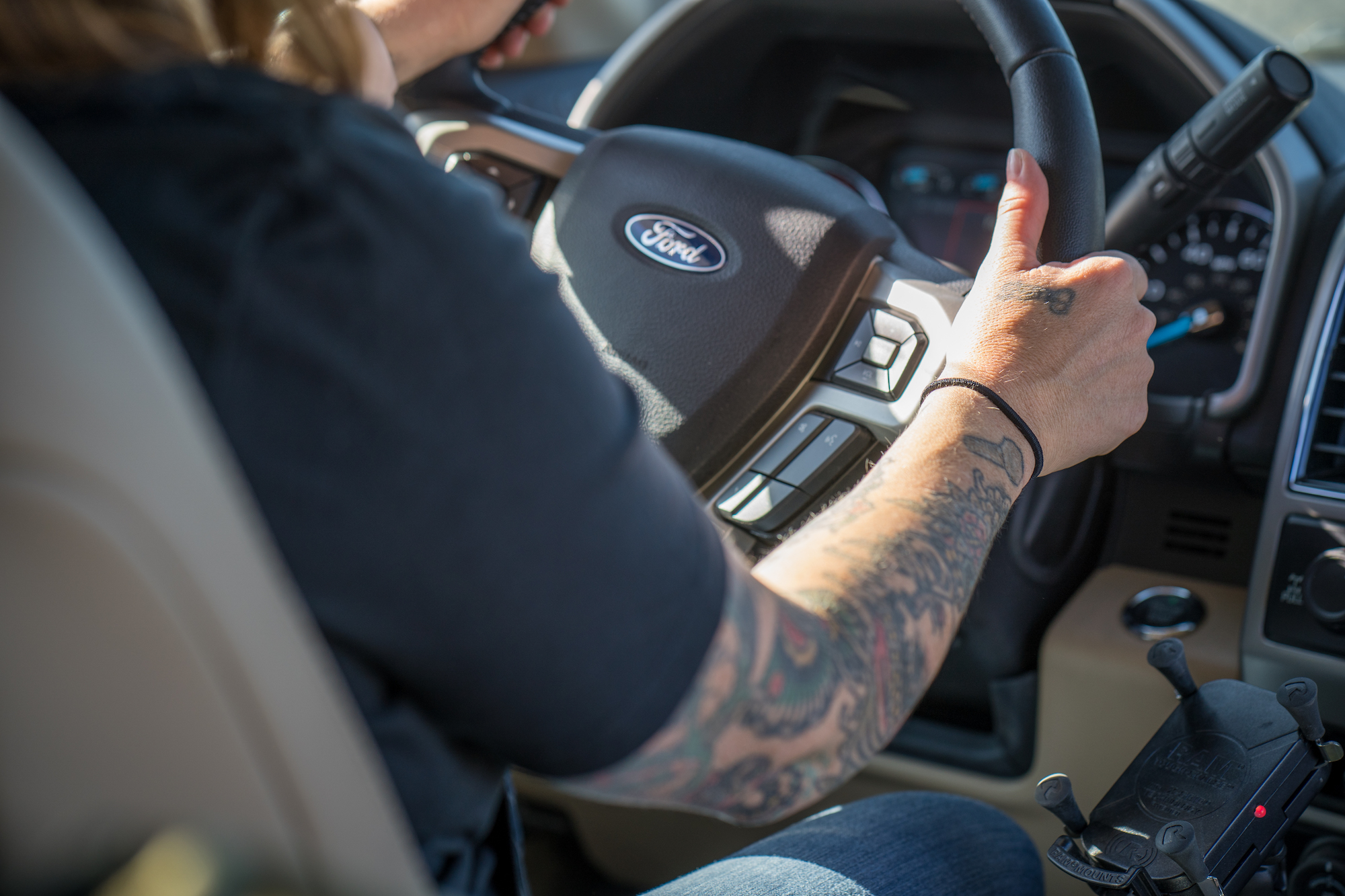 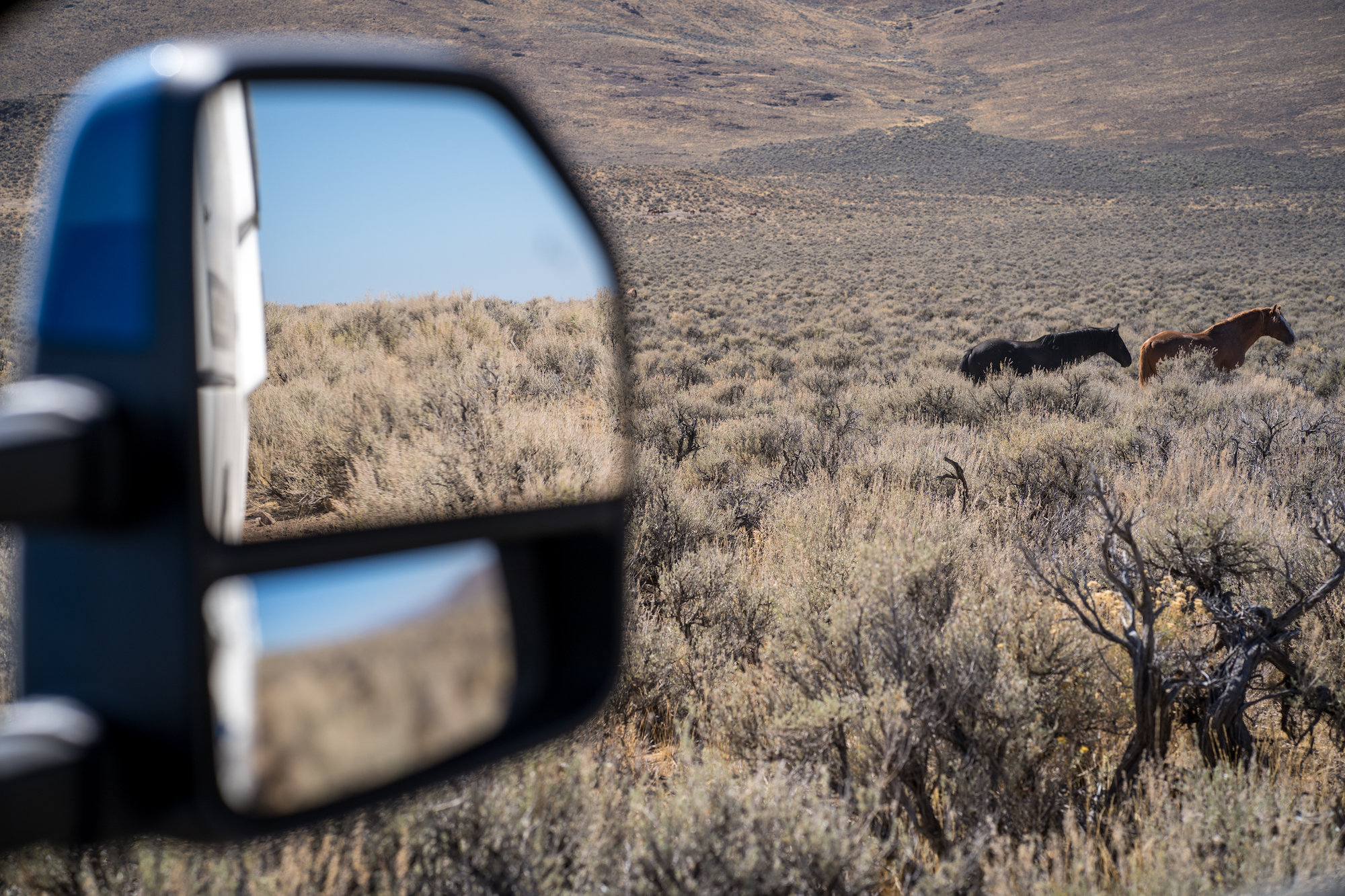 The drive was challenging and beautiful, complete with numerous wild horse sightings along the way.

Areas like the Calico Hills are filled with overland routes and near-endless backcountry possibilities. This is where maps continue their theme, and we stopped on numerous occasions to determine our path forward, ensuring that we stuck to legal trails and ultimately found our way to the western slopes of Donnelly Peak. 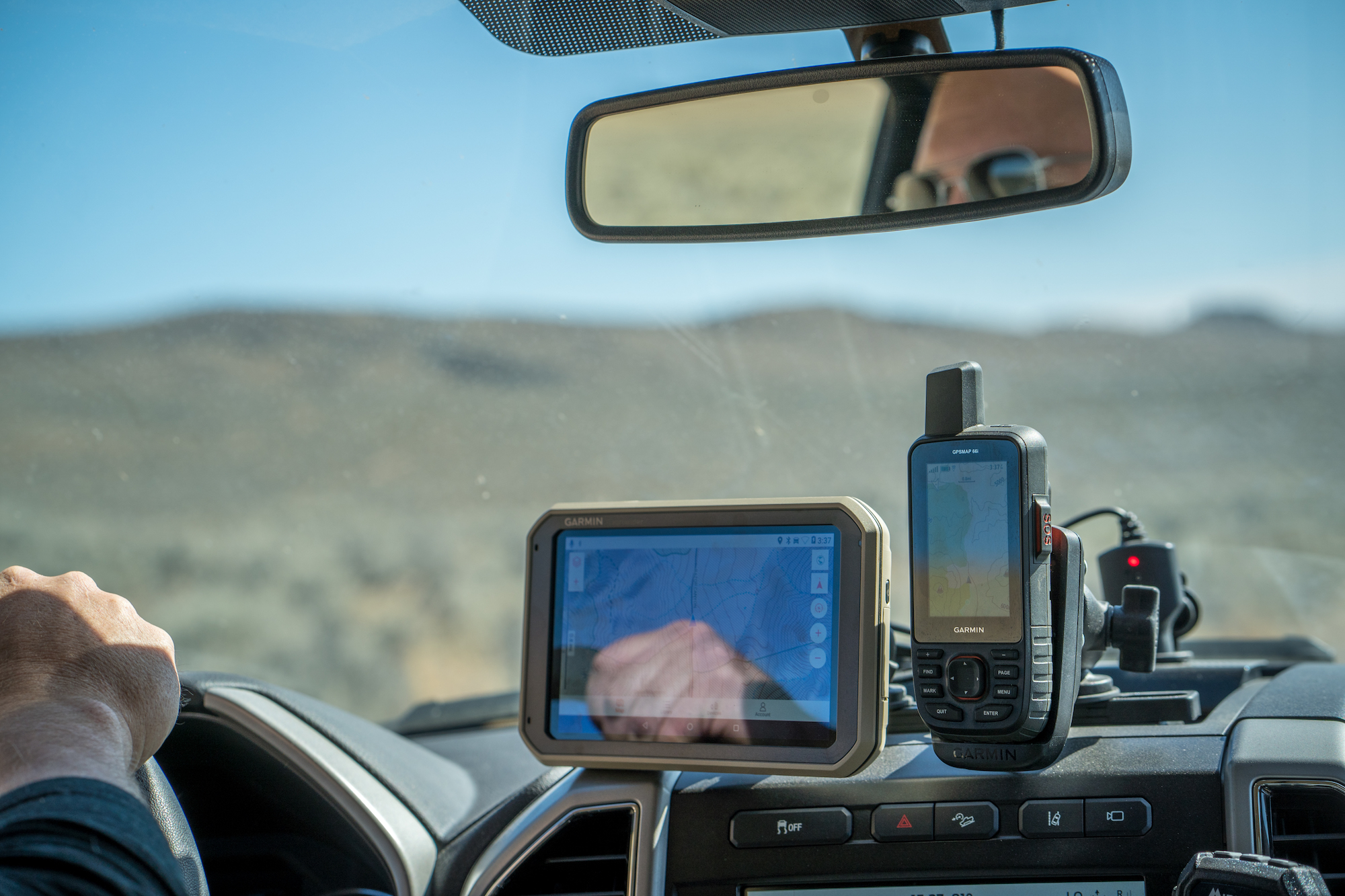 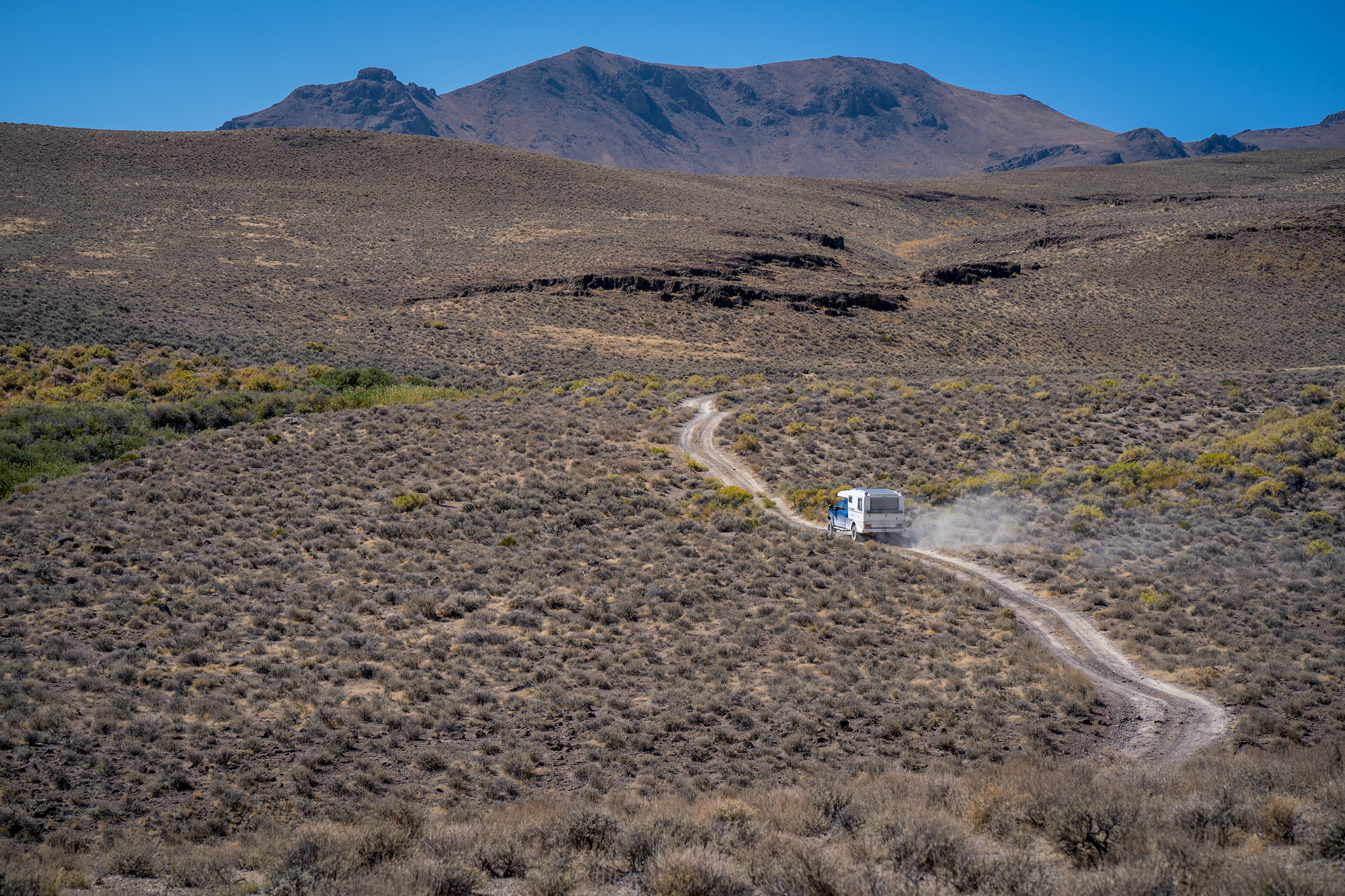 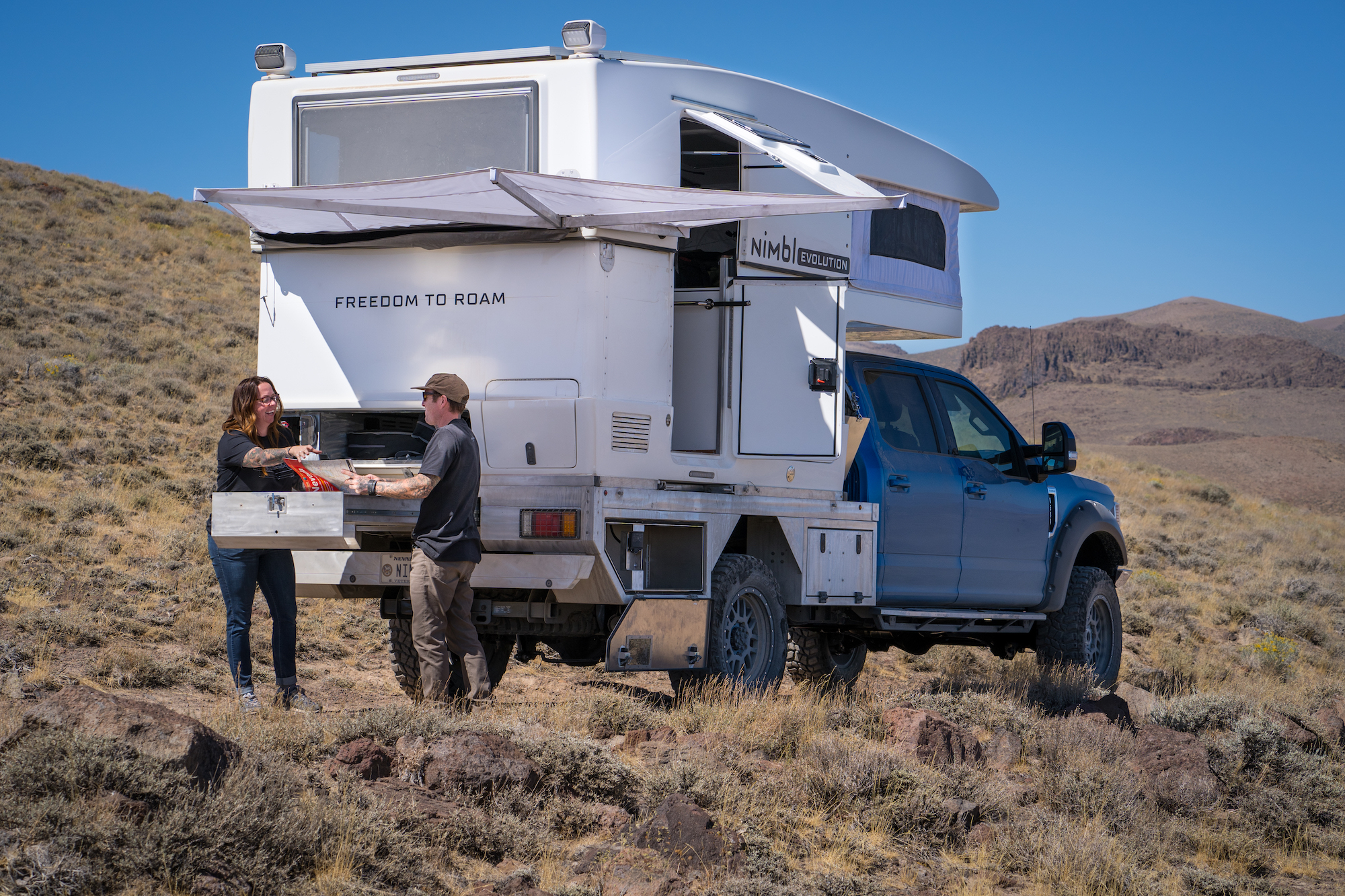 Paula and Ryan broke out the Nevada Gazetteer to orient their location in the Calico Hills. We have found it to be important to stop regularly and take a break from driving and the electronic maps. We would triangulate our position and familiarize ourselves with our place on the page. One never knows when a gadget can stop working, putting the traveler squarely back in analog mode. Looking at the map also seems to make the memories more vivid, and the place names come more quickly to mind. These breaks also give the opportunity to have a snack, sit on a rock, and just take all the adventure in.

Completing our track over the mountain gave a memorable tour of the higher-elevation terrain, a stark contrast to the playa below. But the playa was calling, with one of our goals being to make camp on the massive dry lake bed. We drove out onto the hardened crust and set our own version of an overland camper land speed record (we don’t speed and tell). The truck was filled with laughter as the plume of dust filled the mirrors, and we closed in on our chosen spot for the night. 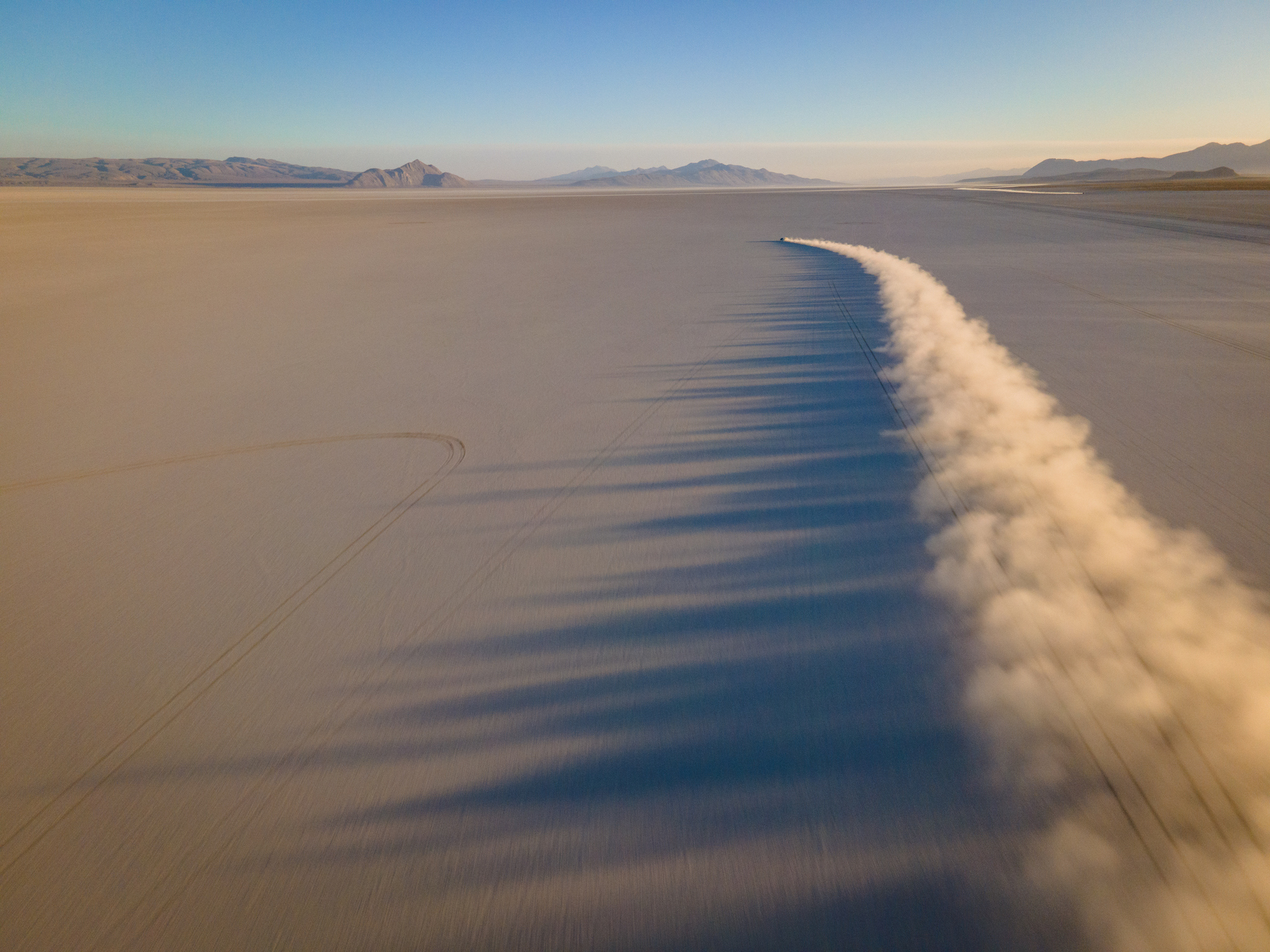 The sun slowly set, and we gathered around the propane fire, reminiscing about the day’s wonders, accessible because of a sturdy vehicle and the desire to see what is over the next hill. Even in 100 lifetimes, we cannot see it all, so we open maps, twirl globes, and daydream about the places we aspire to explore. Terra incognita is all around us, filled with blank spaces in our own maps of the world. Where will we roam to next? 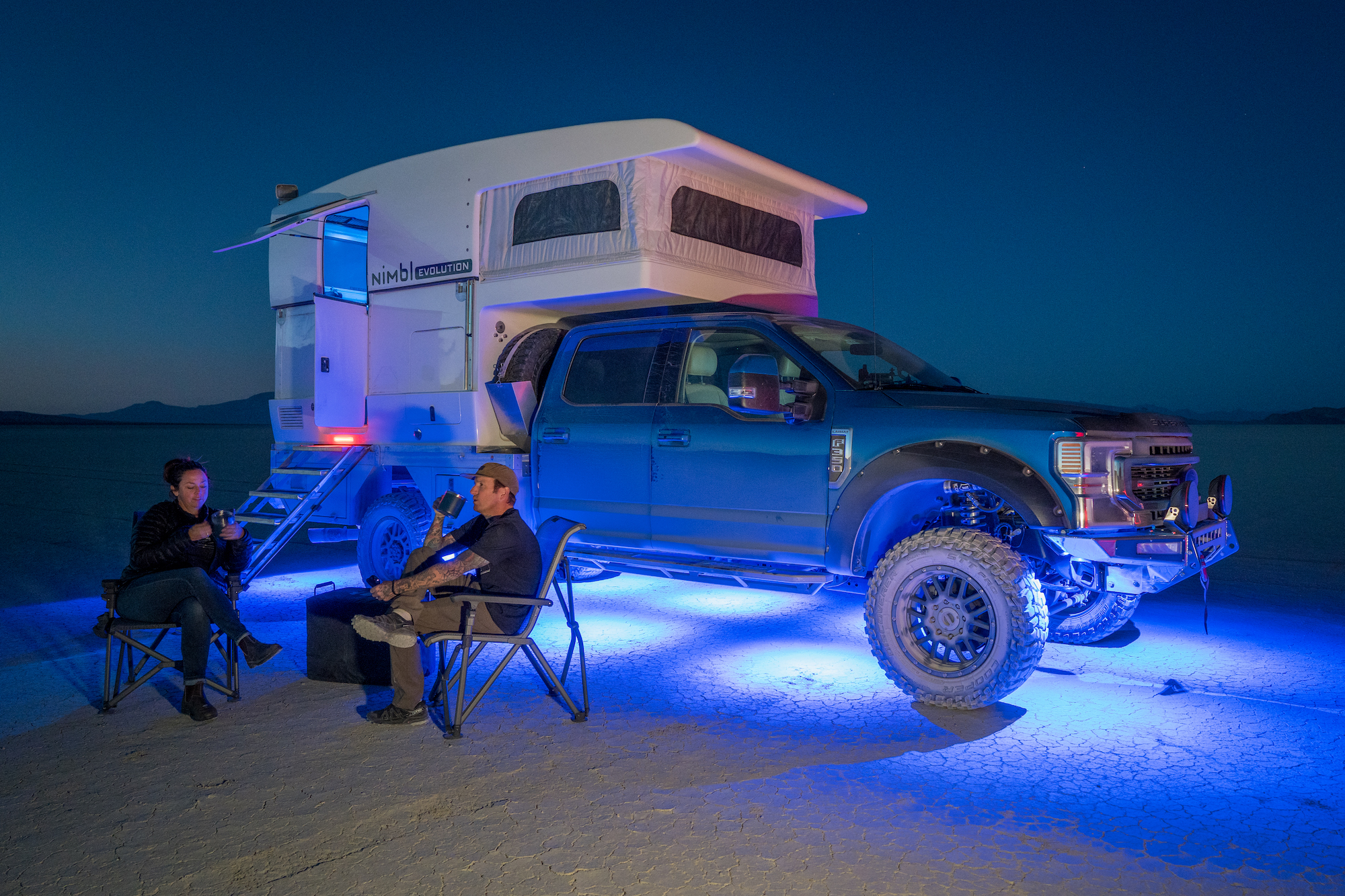 The vehicle we used for this adventure is the Ford F-350 7.3L V8 with the fitment of a custom Nimbl camper. For our review of this model, you can watch it on Youtube here. 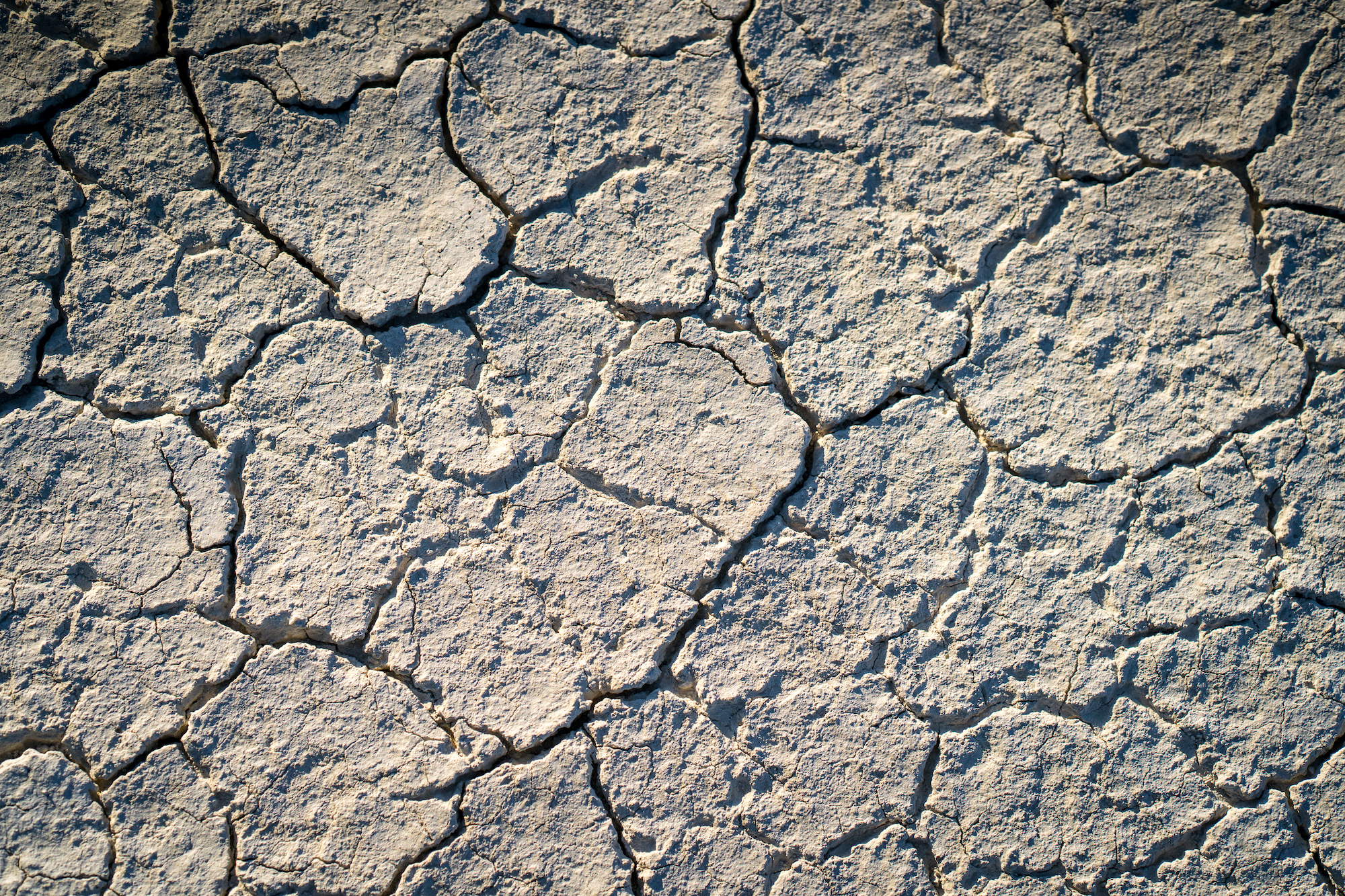