One of the priceless perks of traveling by bicycle is the unfiltered, free access to people and places that are virtually untouched by outsiders and the authentic experiences that come as a result of these encounters. This skeleton key does not come without its costs. In exchange for such access, one must be willing to delve headfirst into the abyss and surrender to the unknown. At times, it may just be a matter of taking off down a dirt track with no predetermined place to take rest for the night (or two) and no clear sense of when or from whence your next meal will come. The reward for accepting the inherent risks of being out of touch, sometimes far away from civilization, and embracing uncertainty is the amazing depth of experience that comes from simply letting situations unfold as they may. Things don’t necessarily happen the way you would choose, but sometimes a series of events occurs that feels as though an invisible magic carpet is guiding you along. Not to sound existential, or to paint the surrealist picture that bike touring is the magic Kool-Aid, but it does seem that our current trip has, at times, been sprinkled with a touch of fairy dust.

We had left the recently paved A3 that snakes across Lesotho through the middle portion of the Sky Kingdom. At some point we made the decision to traverse a very thin green line on the map that equated to dirt road on the legend. In hindsight, I’m surprised it is considered a road at all. No doubt, only well-versed 4×4 enthusiasts could forge many of the steep, narrow, and rough areas that include river crossings, water holes, and boulder fields, especially now, in the rainy season. 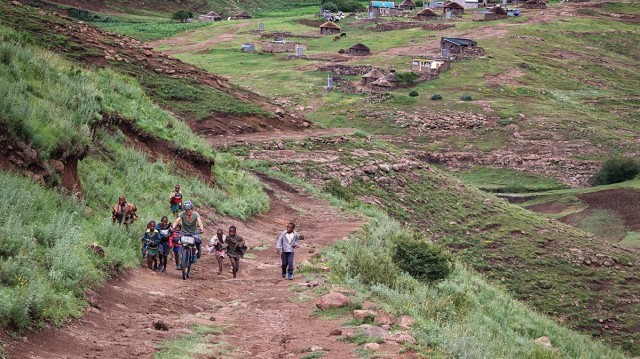 Day one was not only an indulgence of breathtaking scenery and a window into a vastly different culture; it also proved to be a test of our endurance and emotions as we rode some fantastically challenging dirt tracks and were temporary held hostage by two wonderful, remote Basotho villages. After stopping to filter water at the bottom of what looked like yet another several-hundred-meter climb, a distinguished-looking gentleman approached us on horseback. As it turns out, we had made the acquaintance of near royalty. The chief of the area villages, a very nice man, offered me a ride on his horse and laughed somewhat maniacally when I said I’d prefer to stay on my bike. After a few minutes of broken conversation (in and out of English and Sesotho, with a healthy dose of sign language added in), he introduced us to two other gentlemen who seemed to have been summoned from doorways in the giant green hills that surrounded us. We weren’t exactly sure what was going on, but were rolling with it as best we could. As it turned out, he assigned one man to escort my wife Virginia up the massive hill on his horse. He assigned the other to push her bike. I was left to pedal the nearly impossible, winding, rocky route, but the sheer and beautiful strangeness of the situation made it an enjoyable and humorous ride. 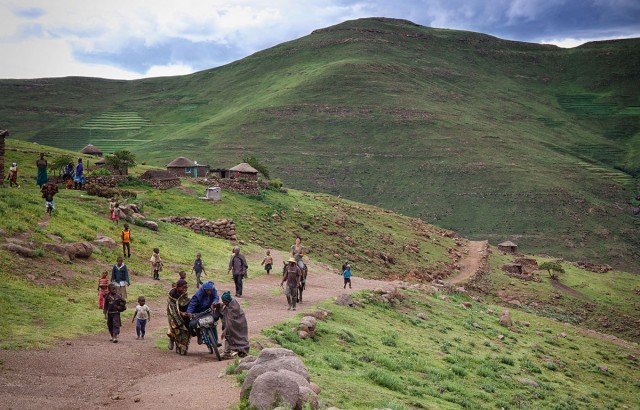 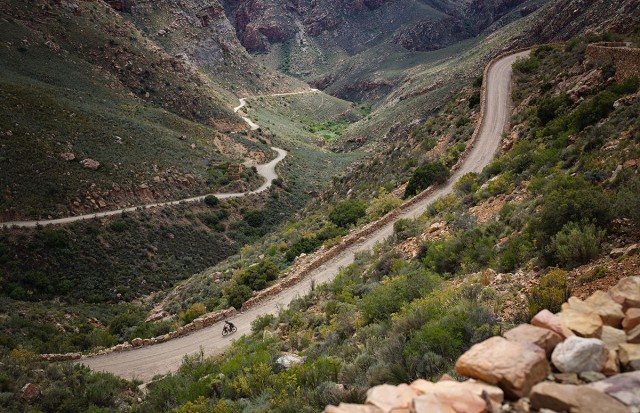 After clearing the crest of the hill, we came upon a village where dozens poured out of grass-pointed huts and greeted us with frenzied whoops and whistles. I can’t be sure of it, but I think they may have mistaken Virginia for some long-lost village princess. The impromptu parade that formed included several daring villagers, each contestant attempting to quickly learn how to ride Virginia’s Surly Troll by mounting the saddle whilst two others held each side of the bike to keep it from falling over. After crossing the couple hundred meters that constituted the village’s length, we were dropped in the front pasture of a pair of stone huts. As we overlooked the high meadow bowl formed by the surrounding vivid, green mountains, an awkward series of meetings, handshakes, and nods commenced. These interactions ensured us that we were destined to camp there for the night. As it began to rain, we proceeded to set up the tent for an audience of about forty children. Aside from a small, dedicated fan base, most of the children dispersed. Within minutes, the rain abated and left in its wake a technicolor, double rainbow that was clearly visible from end to end – the envy of any leprechaun. After meeting the local village chief, sharing some cookies, and whipping up an odd pasta mixture made of random, packaged flavors, we finally had a chance to breathe. We took one last look at the most amazing, star-filled sky I’ve ever seen and gently laughed ourselves to sleep. 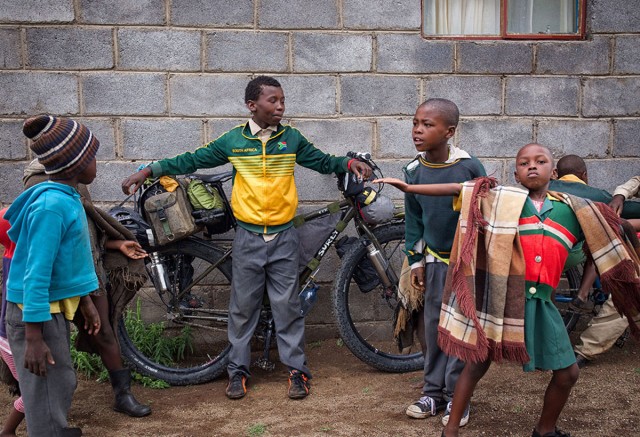 The following day was almost as interesting. We spent the morning traversing a spectacular and difficult track that crested and flowed over countless ridges and rolled us through more villages full of athletic and determined children. Later that afternoon, in an effort to dodge a massive thunderstorm, we ducked under a tin roof lean-to, which happened to be a trash incinerator. Within moments, a small band of shy children quietly approached and gave odd but direct orders to report to the principal’s office in the cinder block ruin of a school next door. As we chatted with the lively principal of the local school – one that served 200 children from the surrounding villages – the rain became torrential and the road became a mudslide. We realized that we weren’t going to make it much further. The moment this thought crossed our minds, the principal was already showing us where to sleep in a small office building for the night. There was no en-suite bathroom, electricity, or running water for that matter, but it would do.

We woke to a sunny morning as uniformed children started showing up two by two, peering around corners to catch a glimpse of the odd travelers staying in their school. After a frenzied photo shoot, the children gave us a tremendously heart-wrenching goodbye. It quickly turned into giggles and laughs as we rolled out in the thick mud, only to get stuck about 20 yards away. 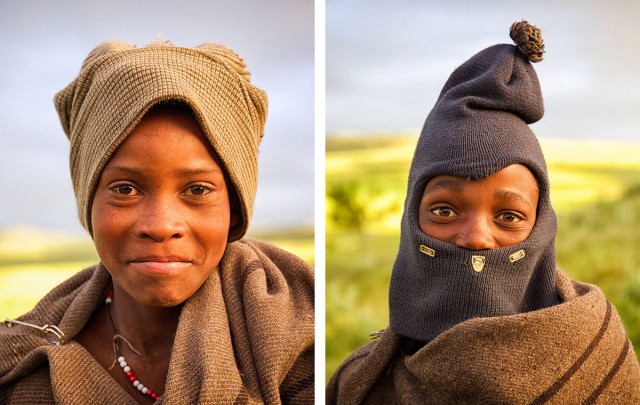 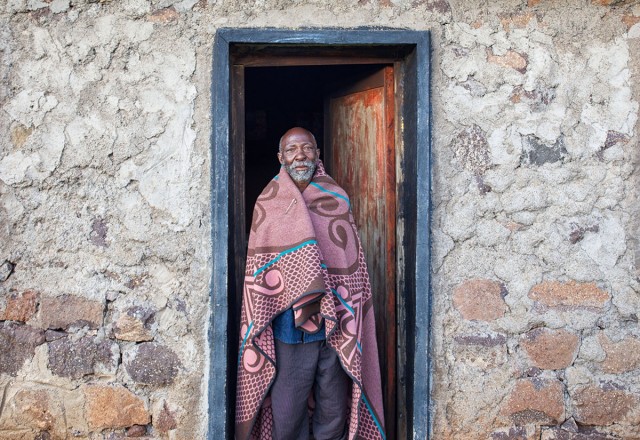 Our Lesotho dirt road odyssey concluded with two more days of wonderful dirt road riding, broken up by the usual small talk with villagers, which always started with an explanation of where we were from and where we were going. It’s pretty amazing to be in a place where it’s possible to run across a few people who have never heard of America or the USA. The final 40 kilometers were along the spectacular Sani Pass, a legendary narrow and rocky descent through untold switchbacks that provide a viewing platform for countless waterfalls, bizarre vegetation, and the breathtakingly beautiful Drakensberg Mountains.

As we crossed the border and the Kingdom of the Sky faded into the quickly forming clouds at our backs, I had already begun to miss the tiny country. It all started with choosing that thin line of unknown terrain on the map. Ultimately, it not only turned out to be some of the best riding I have ever done, it also became a magical portal that led us through beautiful places, seemingly untouched by outsiders, where priceless experiences seemed to unfold time and time again. It’s possible that similar events could have occurred along the more customary tourist circuit, but we believe that by “choosing the road less traveled, that has (truly) made all the difference.” Then again, maybe someone just slipped us the blue pill on the plane ride over. 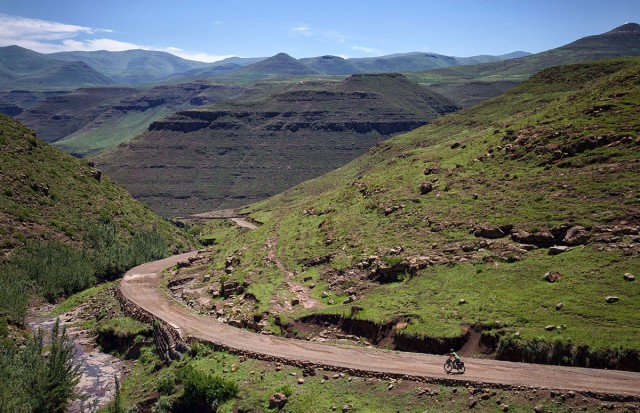 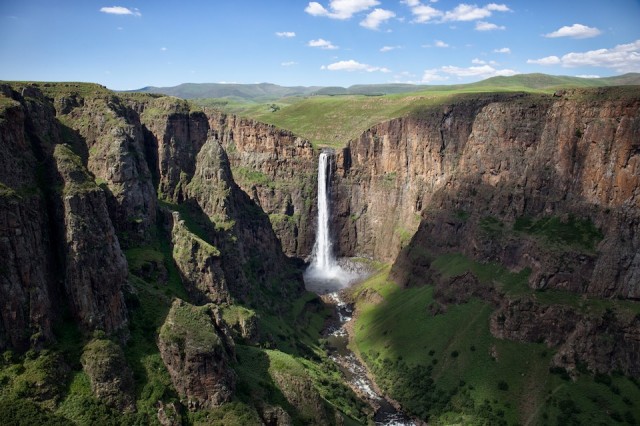 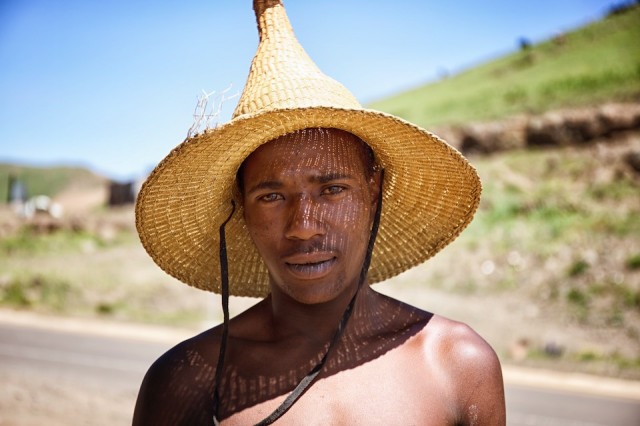 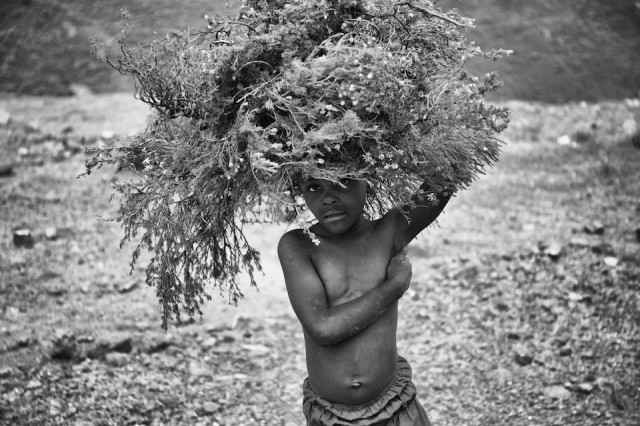 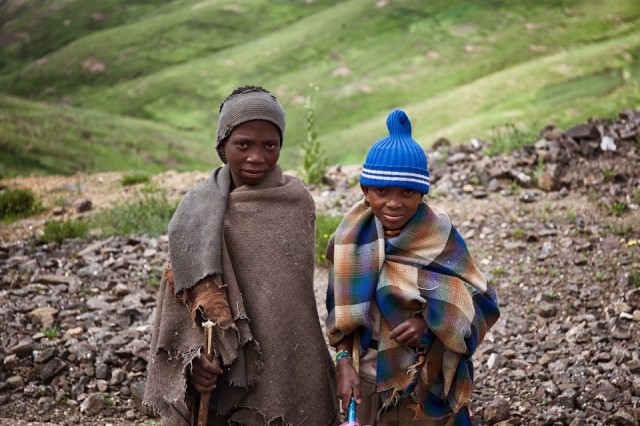 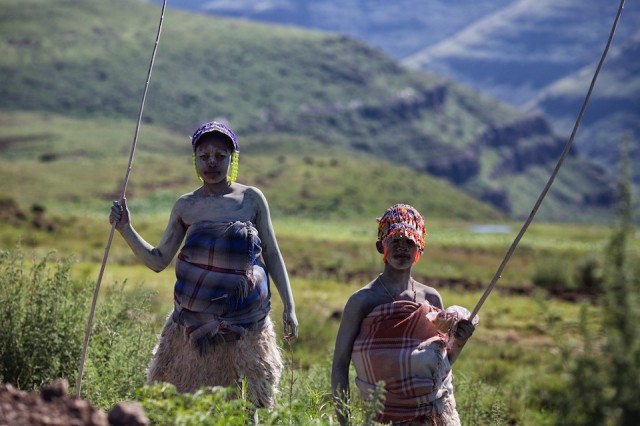 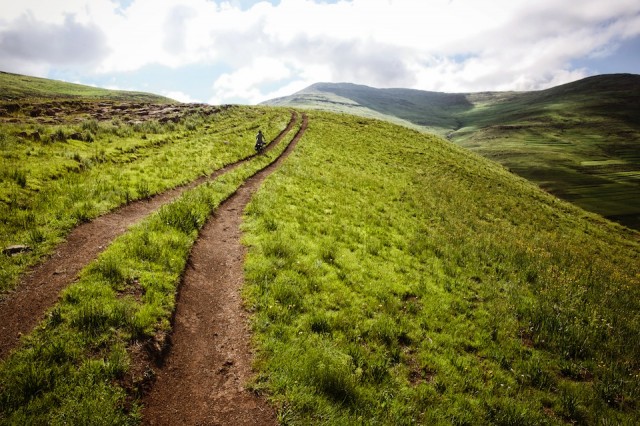 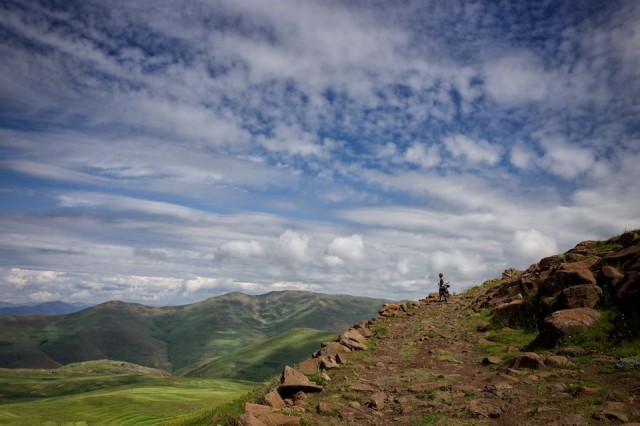 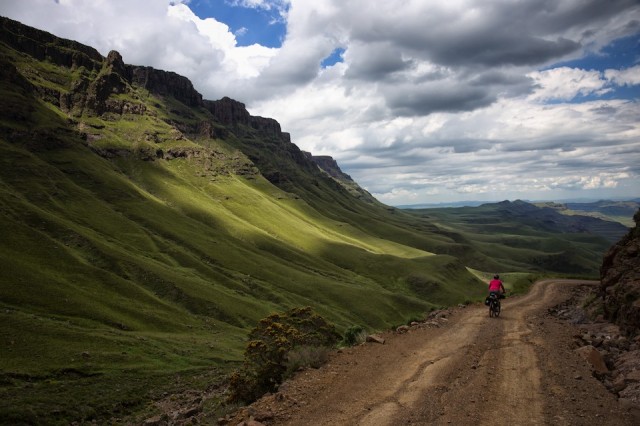 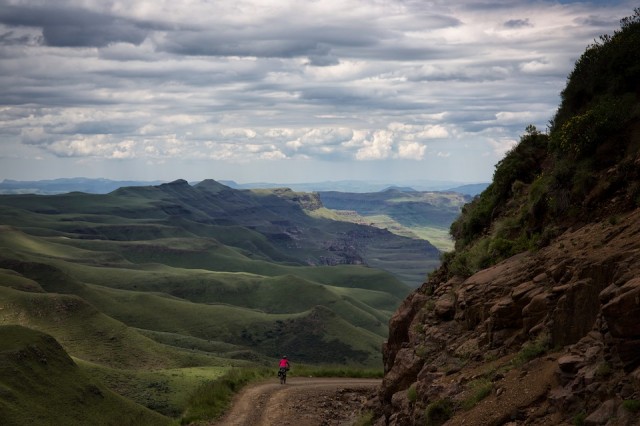 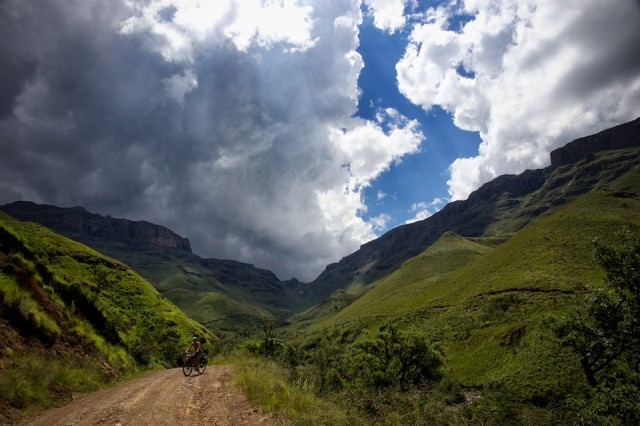 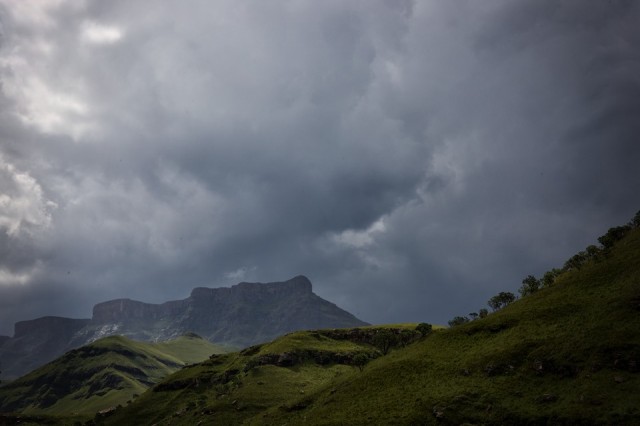 I started Mountain biking in the mid-2000′s and quickly fell head over heels (sometimes literally) for the sport. The more I got into cycling the more I uncovered the smorgasbord of adventures that can be tackled on a bicycle. My innate wanderlust was ridiculously amplified as I discovered blogs and information about the wonderfully epic mode of travel that is long distance bike touring. As a former business owner in the stressful world of digital marketing, I knew I would have to make some major life changes in order to make a big trip possible. So in 2012 I was able to merge my company, change direction and set out on my first long-distance bike tour… which led me to create Pedaling Nowhere. While documenting our travels, I realized that I enjoyed keeping a blog. It enabled me to purposefully practice several hobbies that I am very passionate about including photography, design, DIY projects and continued bike travel.