Youtube is awash with vanlife and overland channels, but very few feature the same level of daring expeditions, camera work, and charismatic storytelling as “Living The Van Life.” I was fortunate to speak at length with the channel’s founder Chad DeRosa back in January to discuss his early life, award-winning film “Out of Nothing,” Youtube success (634,000 subscribers), and his transition from a classic Vanagon Westfalia to an overland ready Mercedes Sprinter 4×4. During our conversation Chad explained that his vehicle swap reflected a desire to embark on more challenging overland trips (with aspirations to travel the world) and to further push the limits of his filmmaking. 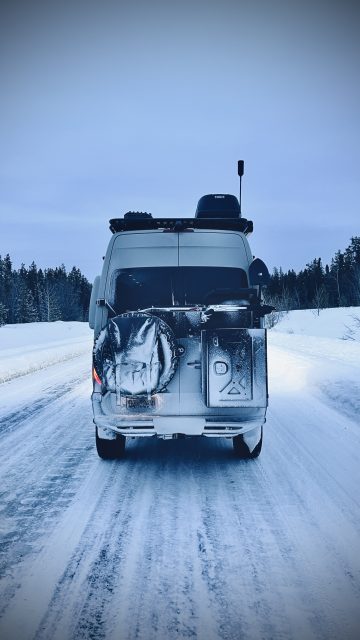 This new chapter began with an epic Desert Overlanding Adventure, which saw Chad traverse the Anza-Borrego Desert, Joshua Tree National Park, the Mojave Desert, and concluded in Las Vegas. The trip was a resounding success, and remains one of the few videos online that showcases the capabilities of a modified 4×4 Sprinter on technical 4WD trails. However, Chad is arguably best known for his Winter Stormvideos up in Washington State, with one such episode being viewed over 16,000,000 times. It was therefore no surprise when he announced that he would be turning his compass north for the winter, but this time he would undertake his biggest expedition to date, driving to the Arctic Ocean.

In this three-part series Chad battles ice roads, heavy snowfall, vast uninhabited wilderness, unforeseen logistical and mechanical setbacks, and lives in his rig in temperatures below -25-Fahrenheit (-31-Celsius). As always, the storytelling and camera work is nothing short of extraordinary, but it’s the moments of genuine fear and uncertainty that make this such an edge-of-your-seat experience. If you’d like to know more about Chad’s latest trips then I recommend subscribing to the LTVL Channel or checking out his website.