There’s no denying a modern vehicle’s comfort, reliability, and luxury. Safety features are on point, climate control creates the perfect interior environment, and infinite power lies beneath our fingertips, allowing us to tackle many trails and obstacles. But there is something timeless about the classics. They make us smile, instill a sense of nostalgia, and transport us back to a simpler time. They have stories to tell, and, typically, so do their owners. Parked on the grassy fields of this year’s Northwest Overland Rally, the classics stood out from the crowd. Here, we celebrate the antiquated, the character-building, and the one-of-a-kind. 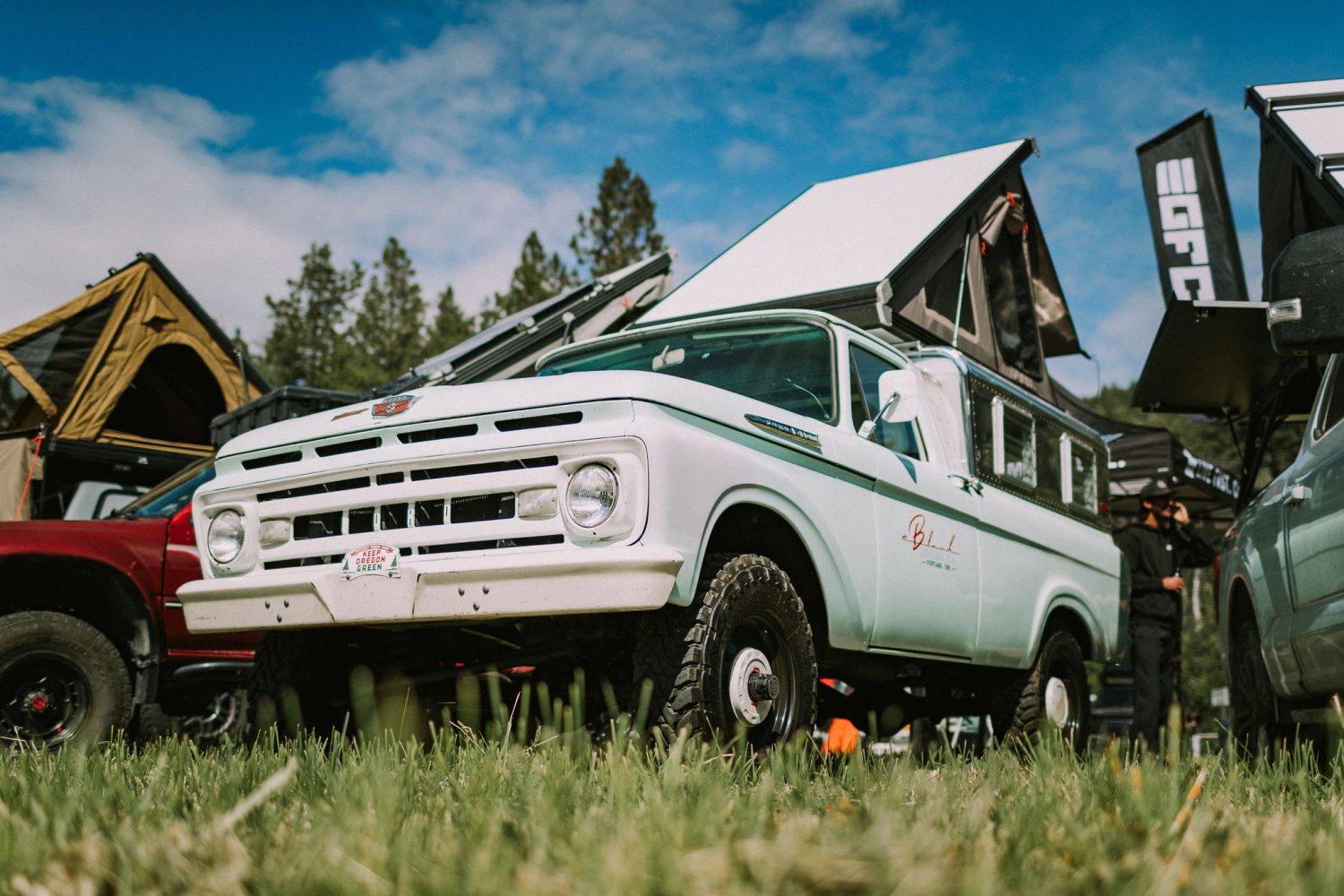 Based in Portland, Oregon, vintage automotive designer Eric Black brings an architectural spin to his vehicle designs, including this 1961 Ford F-100 Unibody. Clad in a cowboy hat, Converse sneakers, and speaking with a soft southern drawl, Black could easily be cast alongside Matthew McConaughey, bringing his casual coolness to each of his builds. Parked in the Go Fast Campers booth, Eric wowed visitors with his vintage Primus stove and 1973 Bultaco Alpina motorcycle.

Known as Mr. Green Jeans, this Ford F-100 lived in the hills of Borrego Springs, California, before it was purchased as a 2WD in San Diego. “I bought it from the second owner about 16 years ago,” Black says. “I initially lowered it, which was definitely the wrong direction. Four years ago, I had the talented duo at Allied Fab do a 4×4 conversion, which consists of 1978 F-150 axles, brakes, suspension, and steering attached to the original but now boxed frame.” The truck features a 300 inline-six mated to a 5-speed and 205 transfer case. Eric has grand plans for the build, which has become the test bed for the new Trail Cap and Go Fast Camper vintage-style camper shell prototype. “My goal is to get the truck back down to the Borrego hills where it can revisit its youth, and then perhaps further south into Mexico.” 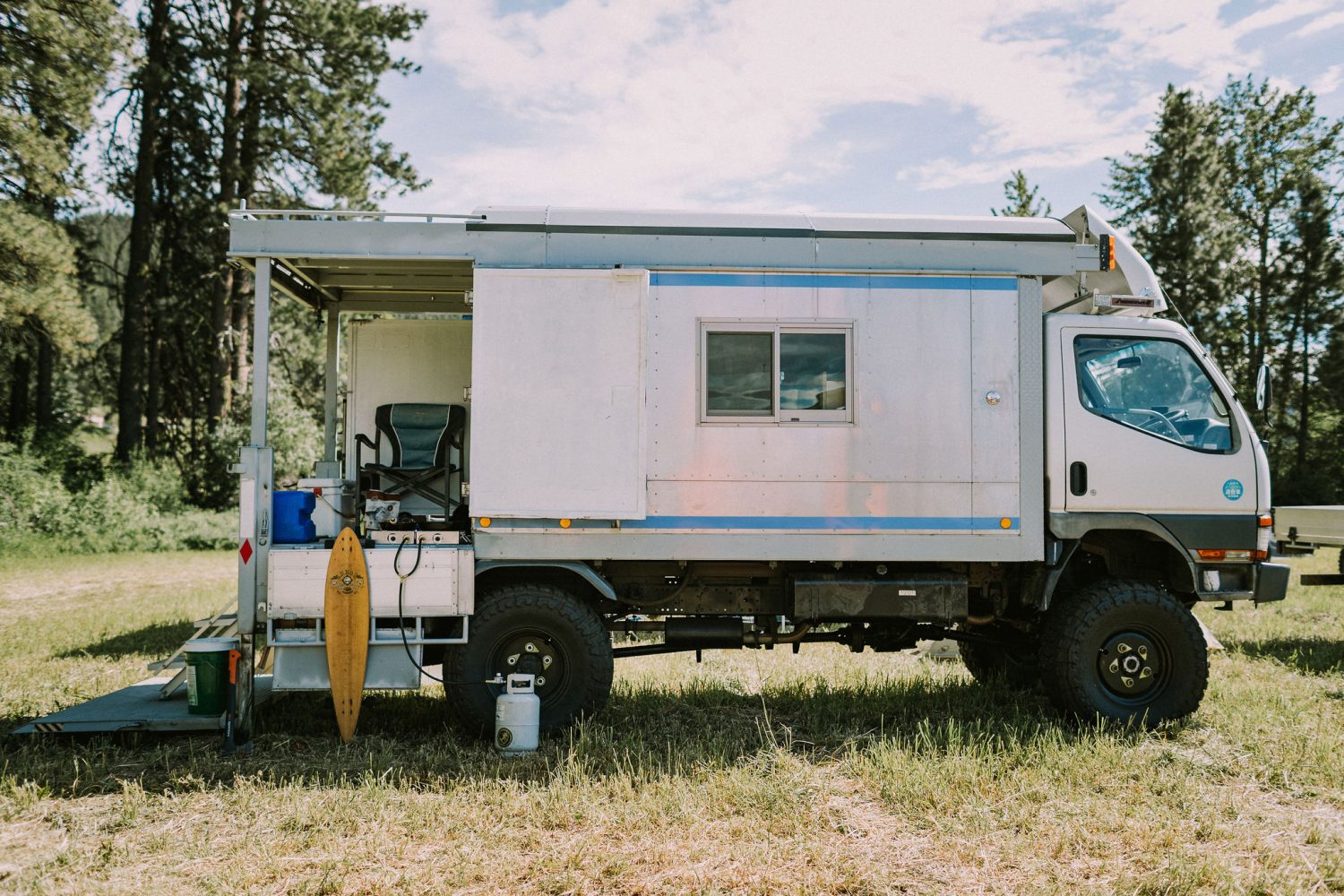 JDM Offroad founder Brian Cox developed a passion for 4WD vans while living out of his 1987 Astro and surfing the SoCal waves in Encinitas, California. Heeding his lifelong obsession with finding “the ultimate 4×4 van,” Cox launched JDM Offroad in 2016 and continues to import unique Japanese vehicles into the US. Northwest Overland Rally visitors enjoyed two Mitsubishi Canters that Brian brought to the event: a 1996 Fireservice Canter Doka and a full-size Canter built out as an RV in Japan.

Imported from Japan’s Kyushu region, the 1996 Fireservice Canter Doka Double Cab 4×4 was a portable fire pump truck in its earlier life. Cox added 37-inch Maxxis Razr tires and Super Singles, bought a plasma cutter, and cut the back of the firebox from the frame. A 6- x 8’4-foot bed from Ute Ltd rounds out the look of the build. “I had the cab and windshield tinted with heat-resistant ceramic tint, upgraded the headlights to LED H3s, and built a flatback winch bumper kit from Coastal Offroad,” Cox says. “NWOR was the first serious trip for both of these rigs.” With a mere 12,000 miles on the odometer, this Canter features a 4D35 naturally aspirated 4-cylinder diesel engine and manual hubs. 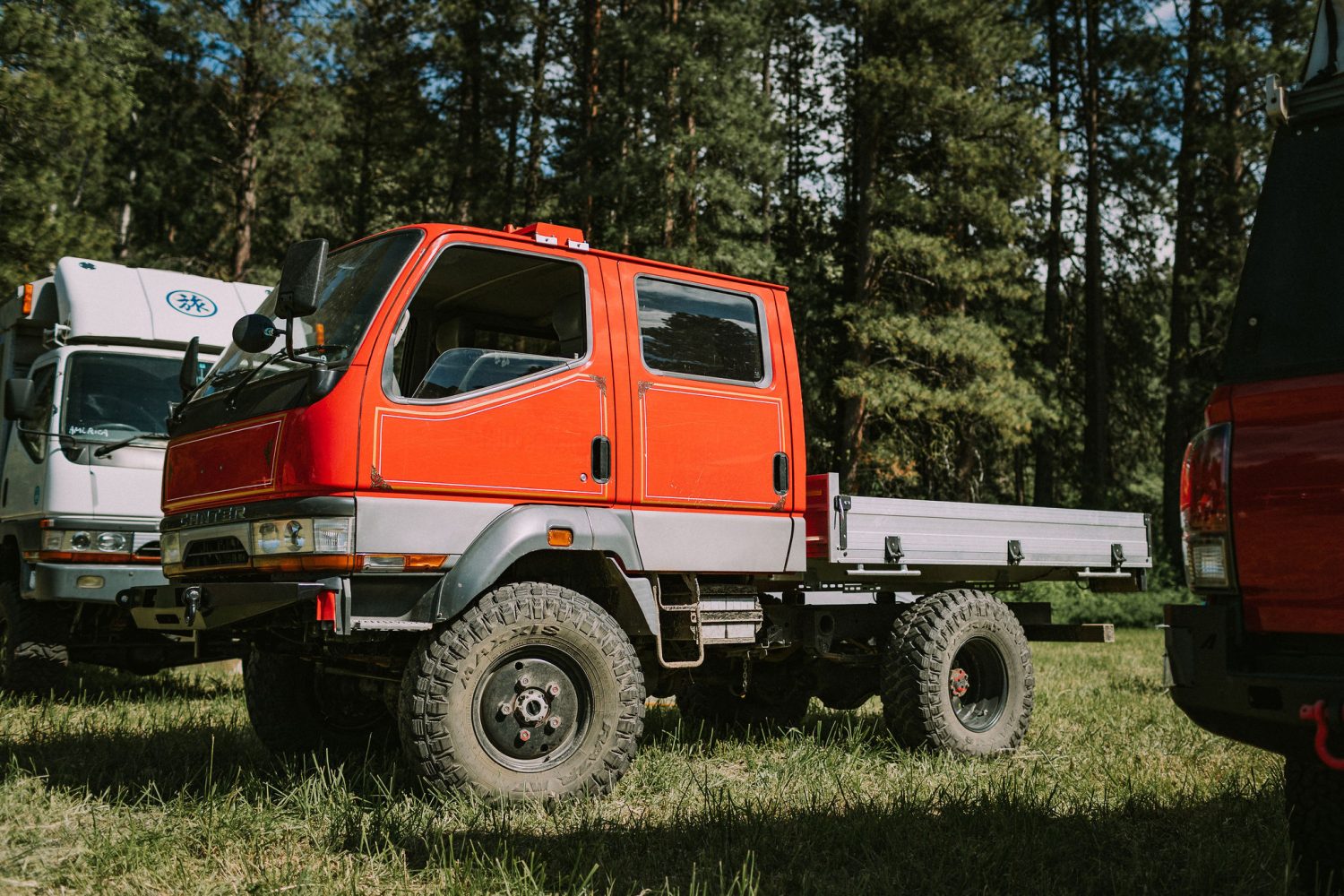 Adorned with a map of Japan on one side, this full-size Canter stood out from the crowd. Interesting attributes include a 4D35 4.6-liter diesel engine, 17,000 kilometers on the chassis, and 2-ton solid axles with push-button activated 4×4 and high low transfer case. Brian made some changes to the platform, including hiring Aalbu Brothers to re-arc the springs and adding a 3-inch lift. “I built a turbo using a Holset HX30 60-millimeter housing, swapped the wheels out for Australian Super Singles, and sized up to a 37-inch Toyo M/T.” The interior was transformed into a livable space with a live edge oak counter, copper sink, and 36-gallon freshwater tank. “It currently has 200 watts of solar panels, 24-volt 100-amp-hour LiFePO battery, and a 3,000-watt inverter,” says Cox. “This powers a double bank induction stove, marine pump, 12-volt 6-liter hot water tank, and under-counter lighting.” 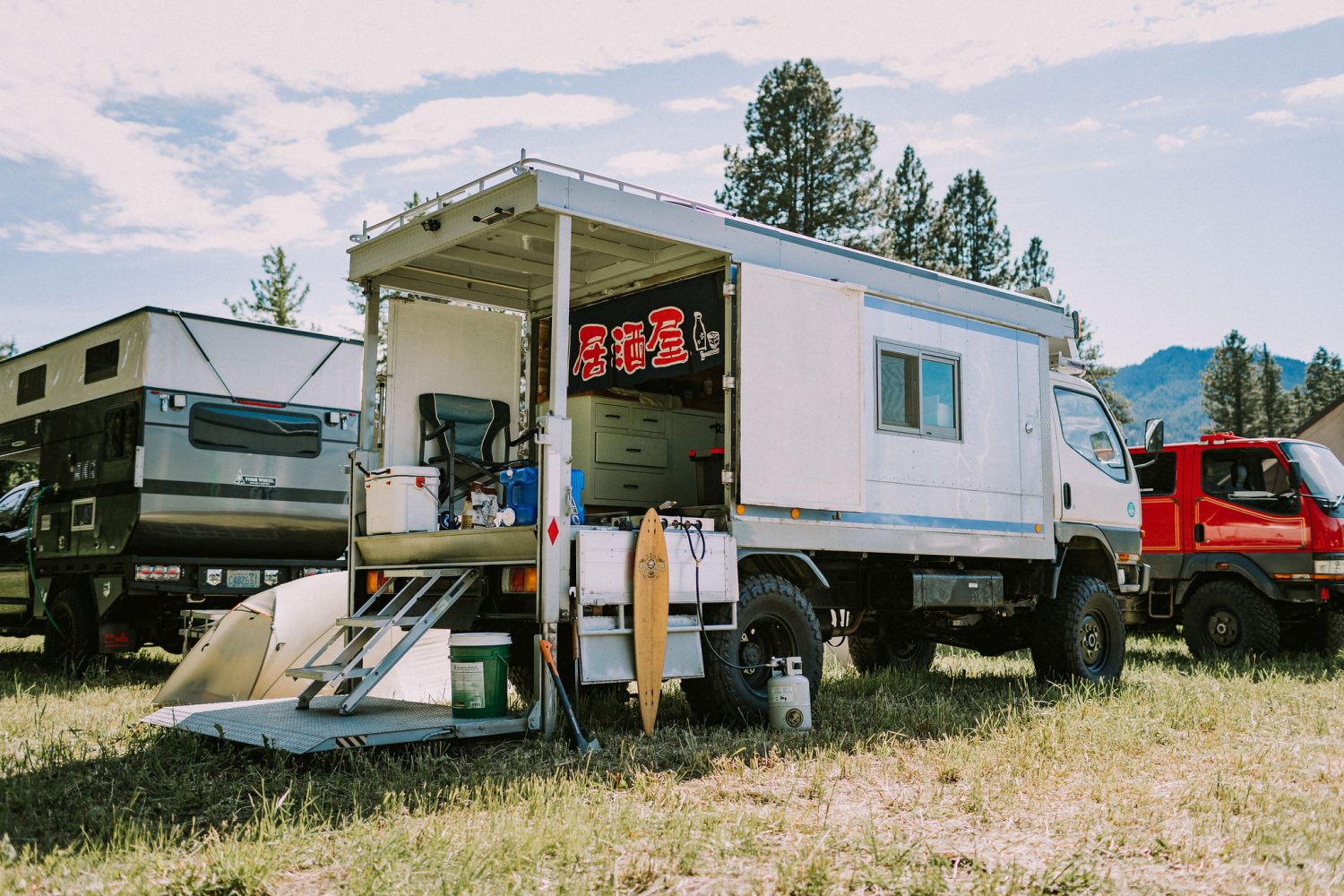 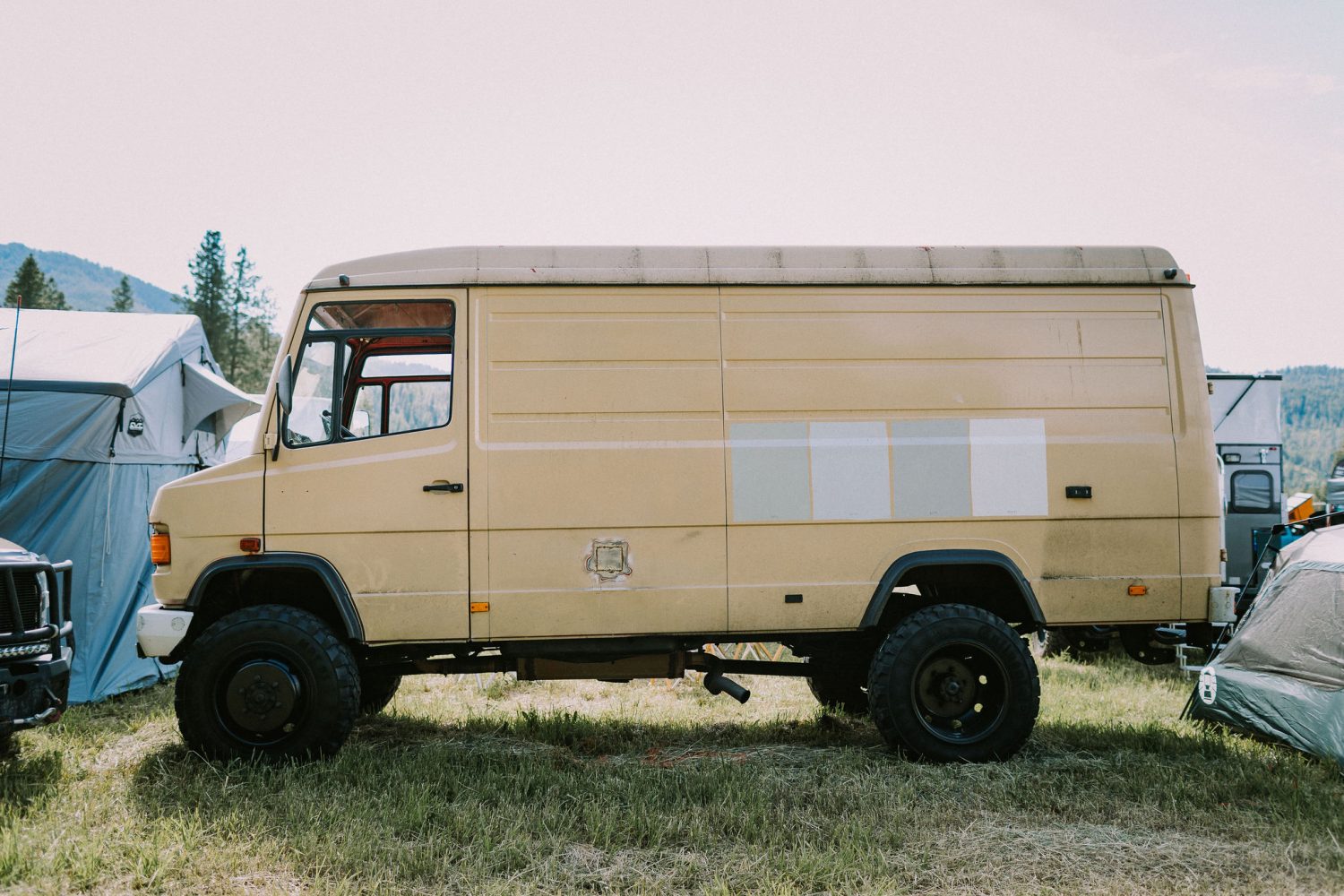 This 1992 Mercedes Vario was hidden in a barn in the Netherlands when Carl Jonsson purchased it sight unseen from the US. Also known as a second-generation Transporter 2 (T2), the vehicle was moved to a Dutch garage and prepped for its roll-on-roll-off journey to Tacoma, Washington. Now that the Vario has arrived stateside, Jonsson’s goal is to restore it, which has so far included fixing eight of the 16 body-to-chassis mounts. “[The van] has the sought-after factory four-wheel-drive which uses pneumatic controls similar to a Unimog, with low range, center, and rear diff locks,” Jonsson notes. “The fuel economy is surprisingly reasonable due to the 4-cylinder, 4-liter inter-cooled turbo diesel engine. It may look old, but it even has ABS brakes!” Carl has been “noodling on” camper layout designs in AutoCad, leaning towards a Scandinavian design aesthetic: simple, functional, and minimalist. 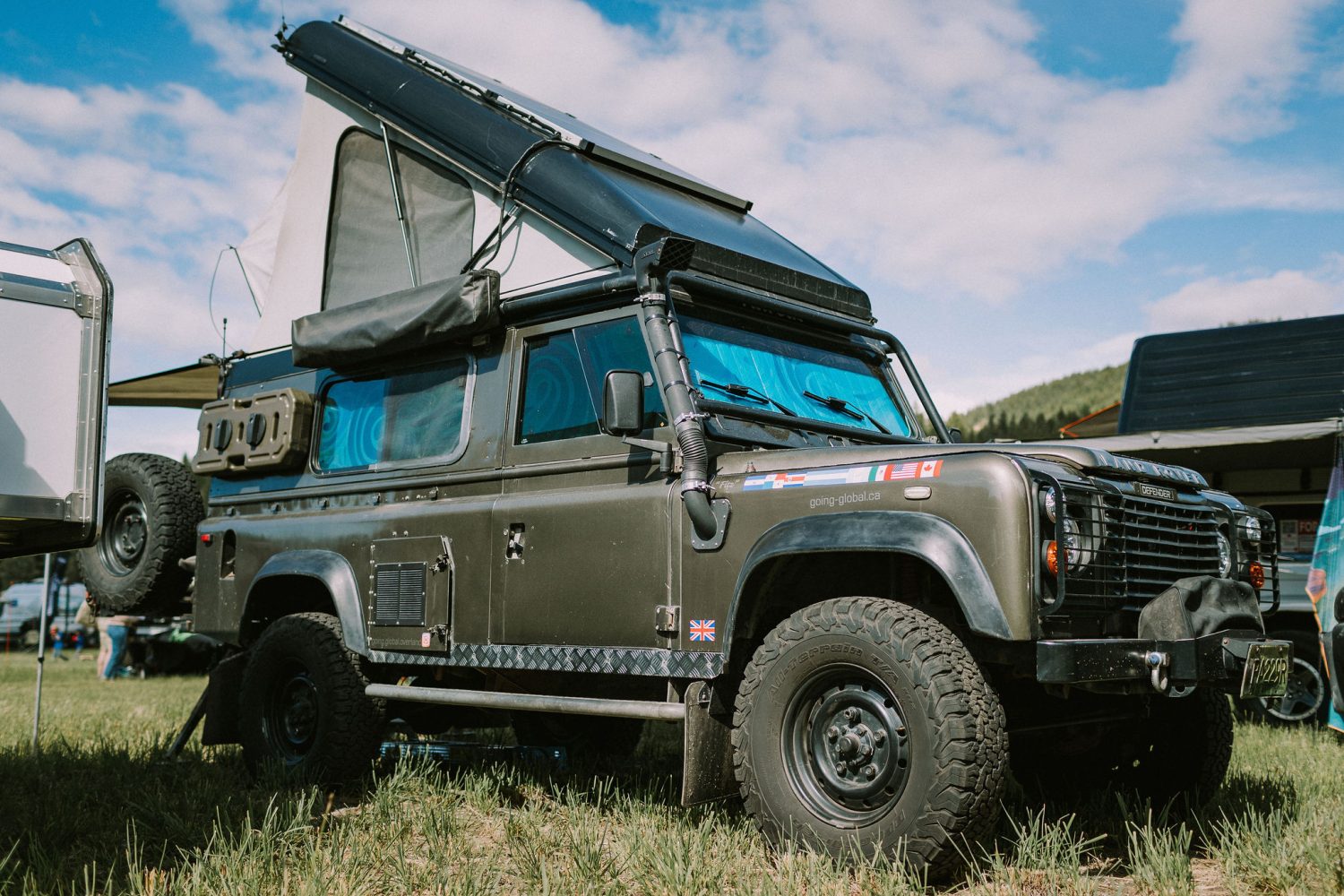 Dave and Pamela Blair’s 1995 Land Rover Defender is a phoenix that rose from the ashes of several trucks used by the British Army unit for training in Suffield, Alberta. “From five wrecks, they made three Land Rovers, and Fitz was one of them,” says Pamela. The couple added an Alu-Cab Icarus roof conversion (the first that was imported into Canada), a snorkel, and a custom roll bar. “The roof is glued and bolted on, which means there’s nothing above the windshield,” Pamela explains. “The roll cage on the front would probably save our life.” Dave and Pamela drove from British Columbia to Panama City and back with their ol’ boy Fitz, whose name was inspired by the fact that “everything fits.” Pamela says they carried lots of tools and spare parts on their trip, courtesy of a custom aluminum trailer from Express Custom Trailers out of Parksville on Vancouver Island. “Structurally and mechanically, we built this truck as strong as we could make it,” Pamela says. “We haven’t had any show stoppers. [Fitz] was a champ, all the way down to Panama City and back. 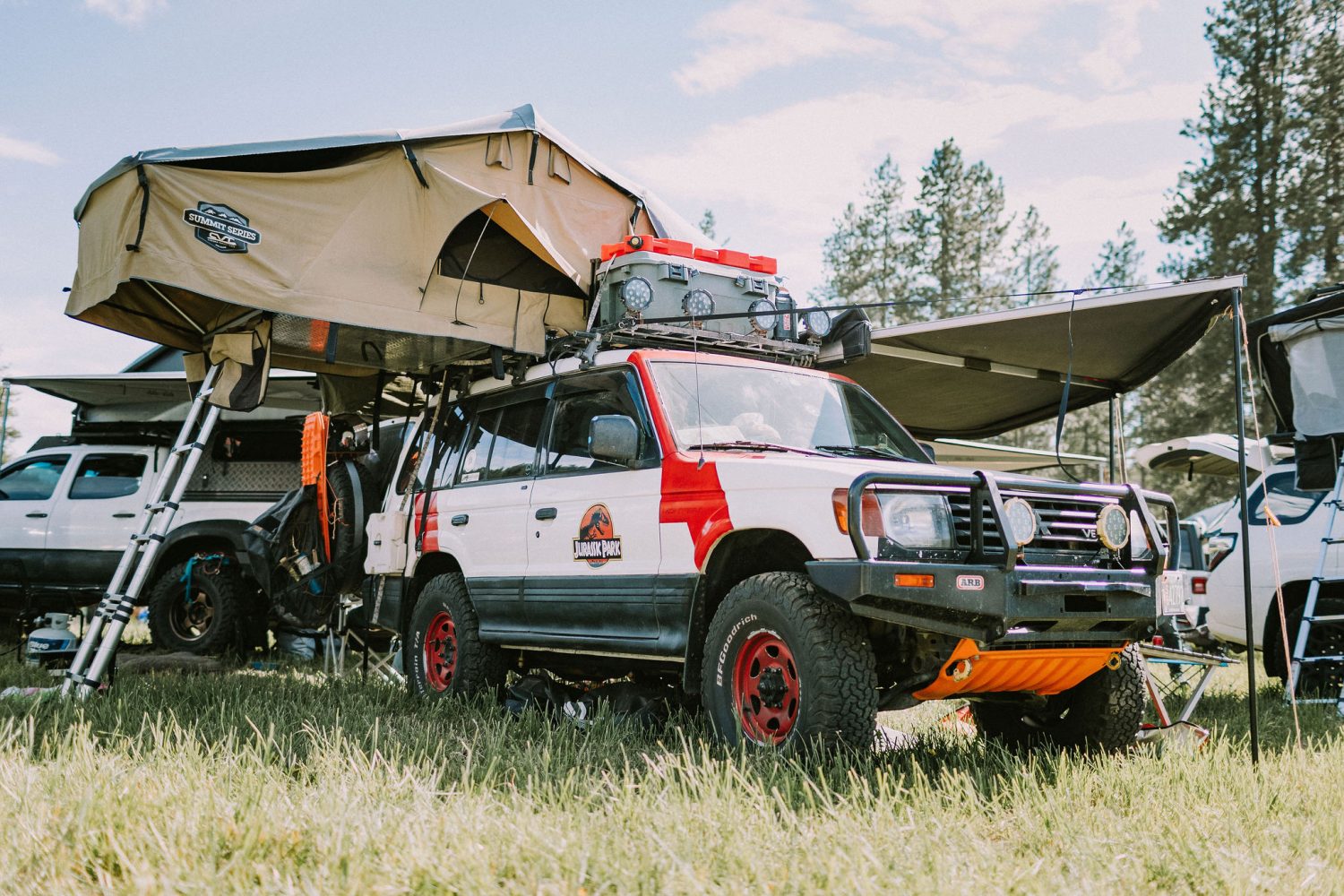 Seeing David Riker and Jamie Walker’s 1995 Mitsubishi Montero on the trail is like being transported to Isla Nublar. The truck’s tasteful livery is a nod to Jurassic Park, and a set of four spotlights, a roof box, and an ARB bumper add to the theme. Topped with a Cascadia Summit Series rooftop tent and 23 Zero USA awning, this truck is where David, Jamie, and their pup Odessa have called home for the past two years. “I bought the vehicle 10 years ago with the intention [of] taking more adventures in a reliable vehicle,” Riker says. “Since then, I have put on over 130,000 miles exploring new places. The Jurassic Park theme fulfilled a childhood dream since it was my favorite and the first movie I [watched] in the theater. I always love seeing the excitement on parents’ and their kids’ faces when they do a double-take as we drive by.” 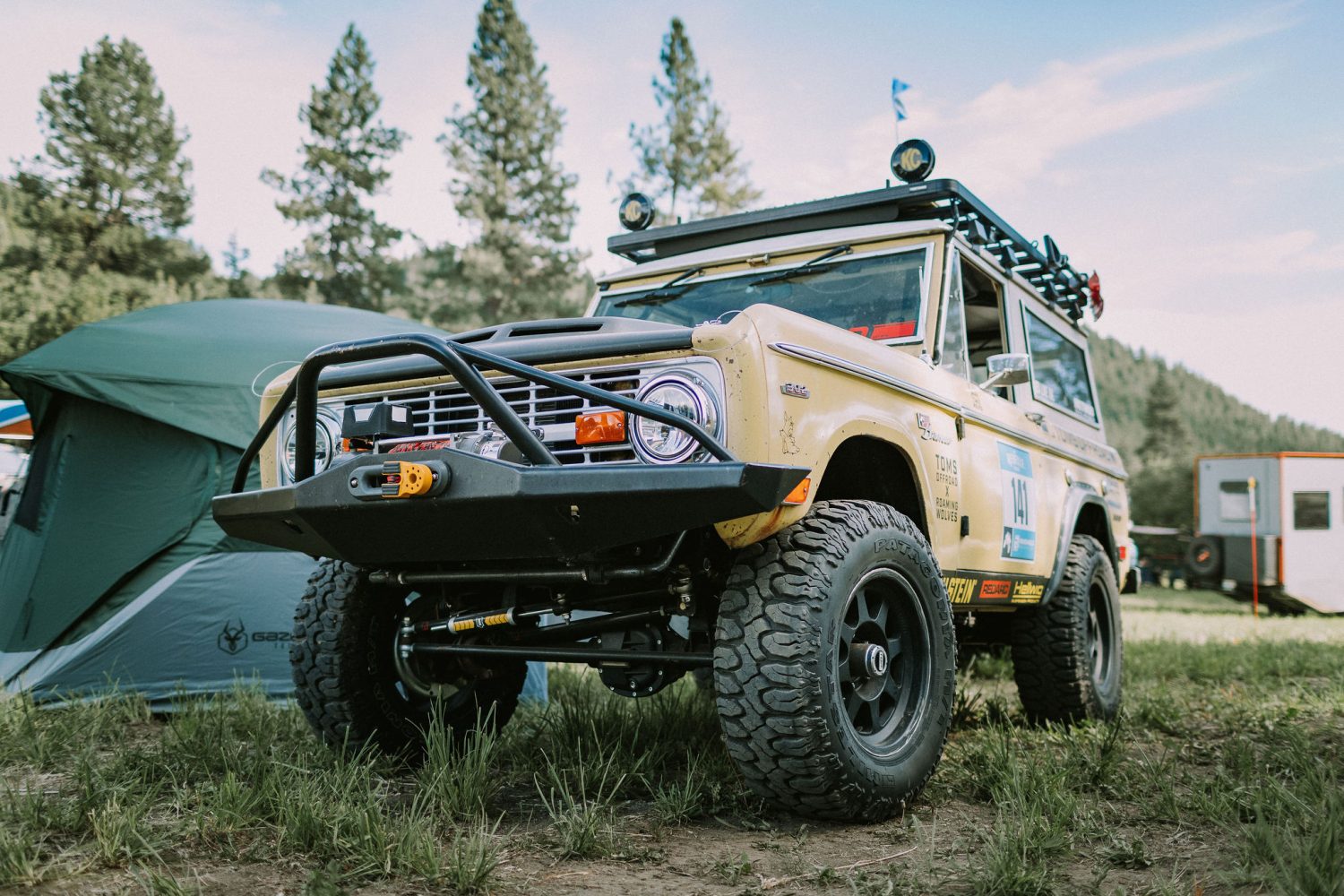 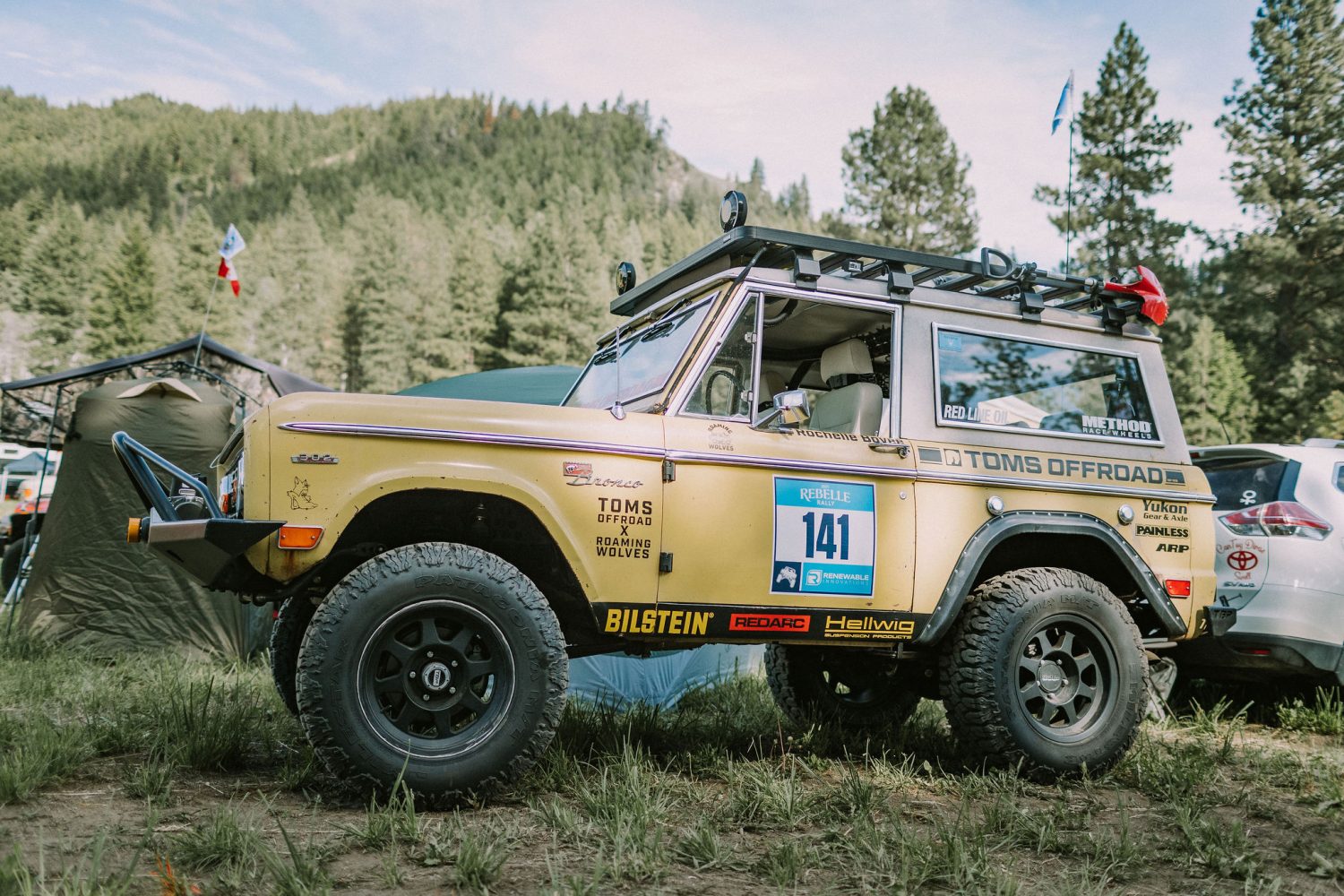 There was a strong Rebelle Rally contingent at this year’s Northwest Overland Rally, with various classes on offer and a good turnout of past, present, and future competitors. Team Roaming Wolves brought their canary yellow 1969 Ford Bronco to the party, which remained in the family since it was purchased in 1968. “The Bronco has always been about family—outings with Dad, rebuilding it as a family, making memories in it with our own kids now, and rallying it as a sister team,” says navigator Melissa Vander Wilt. “Now that family includes fellow Rebelles, our title sponsor Toms Offroad, and the overlanding and Bronco communities. It’s been the catalyst for many positive life experiences, and we feel so lucky.”

The Bronco features a Mustang engine mated to a 1973 Ford C4 three-speed transmission. “I love the power of the 302 roller motor and the Toms Offroad premium seats,” says Driver Rochelle Bovee. Other modifications include a 2.5-inch Toms Offroad suspension lift, Hellwig front, and rear sway bar, and Energy Suspension poly bushings, which help with comfort during long rally days. Thirty-three-inch Patagonia mud-terrains and Method race wheels accentuate the Bronco’s vintage vibe. Melissa says her favorite thing about the Bronco is the growl. “Throaty. Loud. Powerful. I also love her smell—fumes for days, but somehow comforting and nostalgic… in a choking kind of way? It’s a smell that means fun.”