In 2012 we cycled from Cape Town to Tanzania. You’d think that a single big African cycling trip would be enough for one lifetime. For some folks, I’m sure it would be. For others, the allure of Africa is irresistible. To quote an elderly British woman who we met in our travels, “There’s something about Africa that just gets in your blood.” For her, the infection has kept her on the continent for 50 odd years. For us, it meant a return to the motherland after only 1 ½ year’s absence. 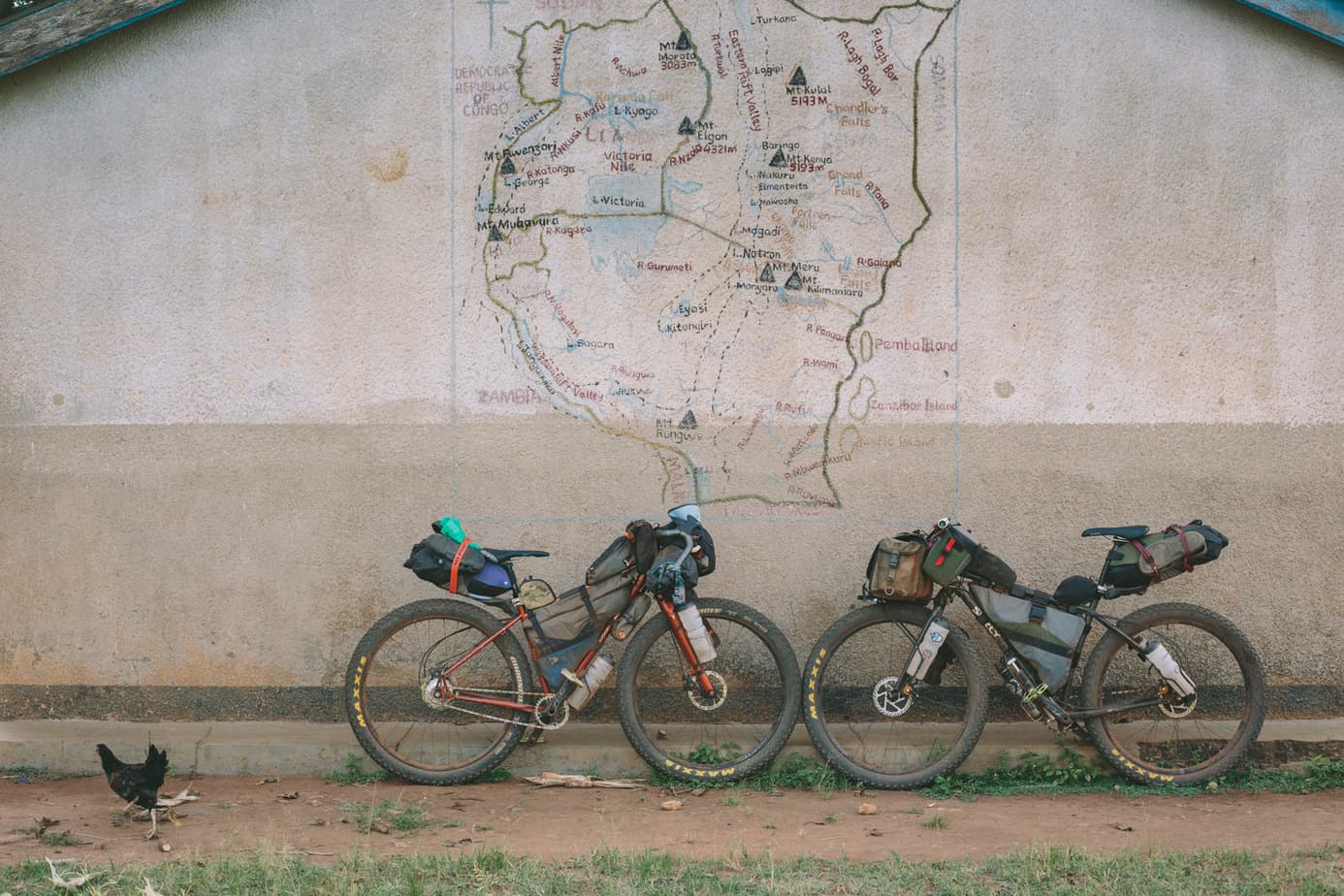 Why did we go back? That’s a question we’ve been asked many times and by many people, including friends, family, fellow bikepackers, and many of the local people we’ve met along the way. It’s a fair question, I suppose. Traveling in Africa is a challenge, especially when going at ground level, off-road, and by bicycle. Over 25 percent of its landmass is covered in desert, while the jungles and rift valleys of equatorial East Africa can be exquisitely hot and humid. There are dangerous animals, scary viruses and parasites, and, unfortunately, regions and people who experience seemingly ceaseless conflict. Many Africans suffer from extreme poverty and hunger, often the result of political “mismanagement” of their country’s capital. Pedaling there can be, and often is, difficult, exhausting, and even painfully sad. So, what’s the draw? The short answer is, that despite all of its baggage, the Africa we’ve experienced can also be sublimely beautiful, joyful, and bursting with life like nowhere else we’ve ever been. 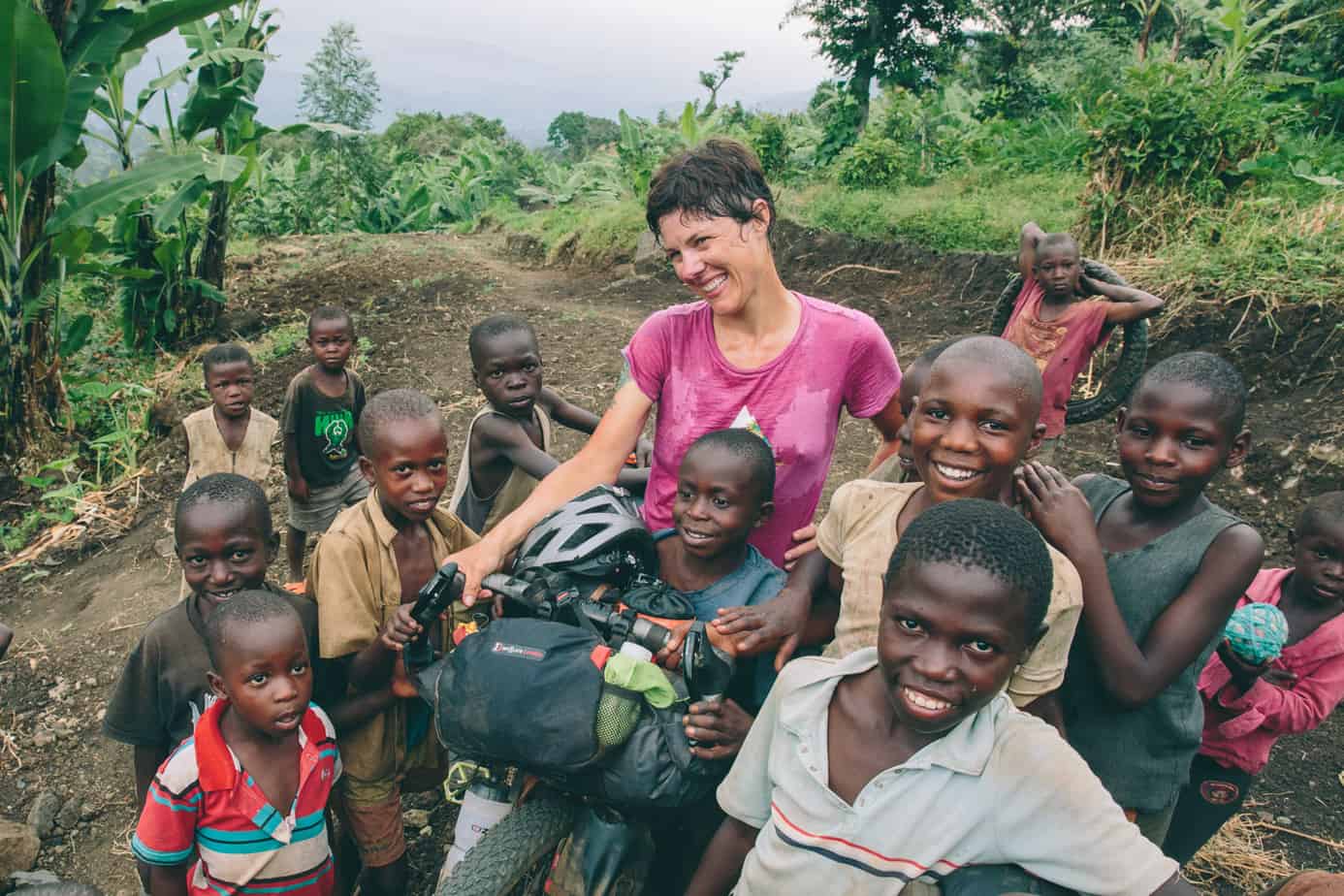 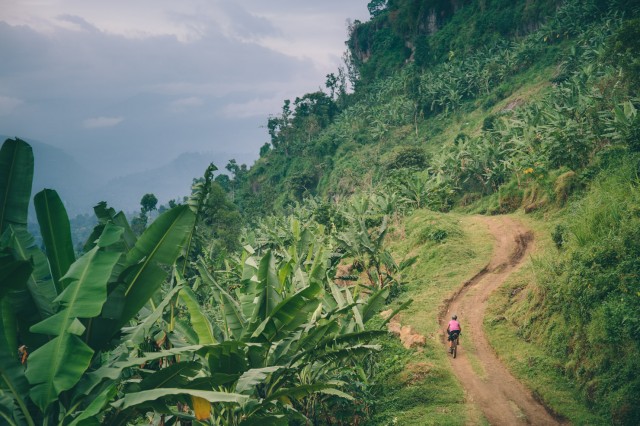 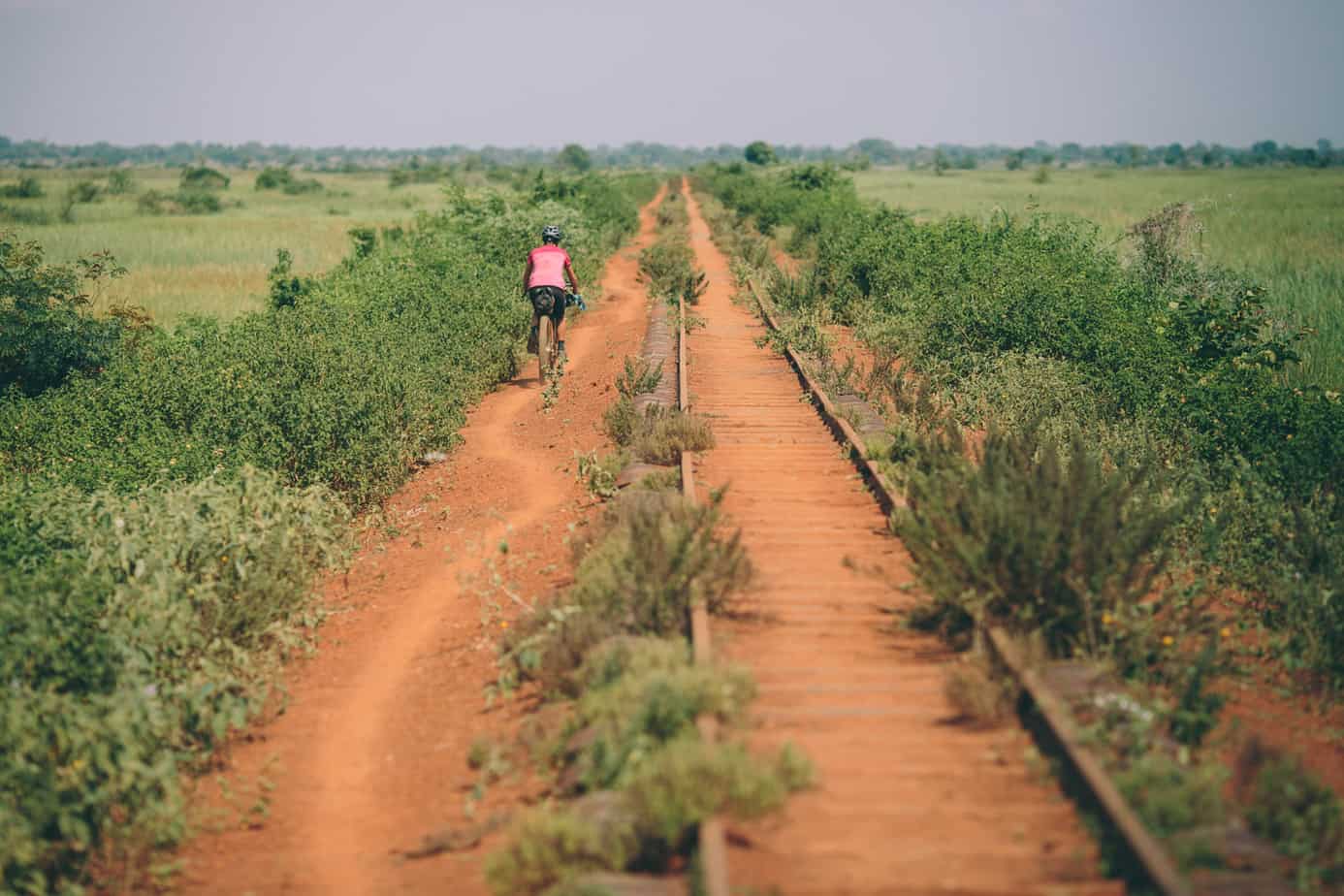 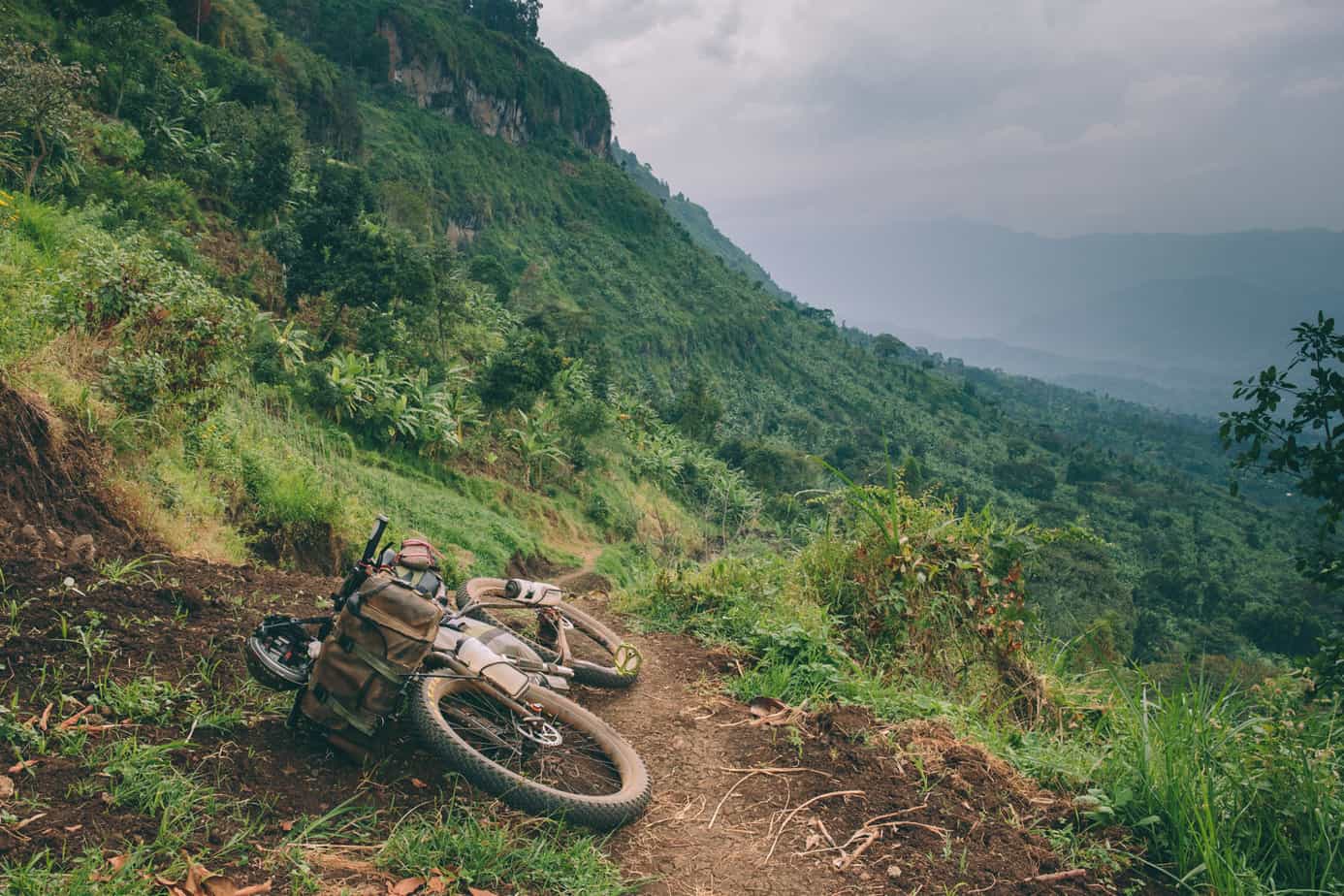 Our decision to cycle through the specific countries of Uganda and Rwanda is a little less complicated. On our first cycling trip in Africa, we had included the two countries in our itinerary. We both had romantic visions of primal rainforests teeming with all manner of life, and Gin has wanted to see chimpanzees and gorillas in the wild since she was a kid. As it turned out, time was not on our side. The incredible hospitality we found in South Africa, the captivating beauty and endless climbs of Lesotho, and the easy friendships and comfort we found in Malawi tempered our pace. In retrospect, our ambitions had been way too lofty. Instead of racing through them, we chose to truly experience our surroundings and its people. So, with flights already booked for Morocco and a quickly approaching monsoon nipping at our heels, we left sub-Saharan Africa without ever visiting the Rift Valley. 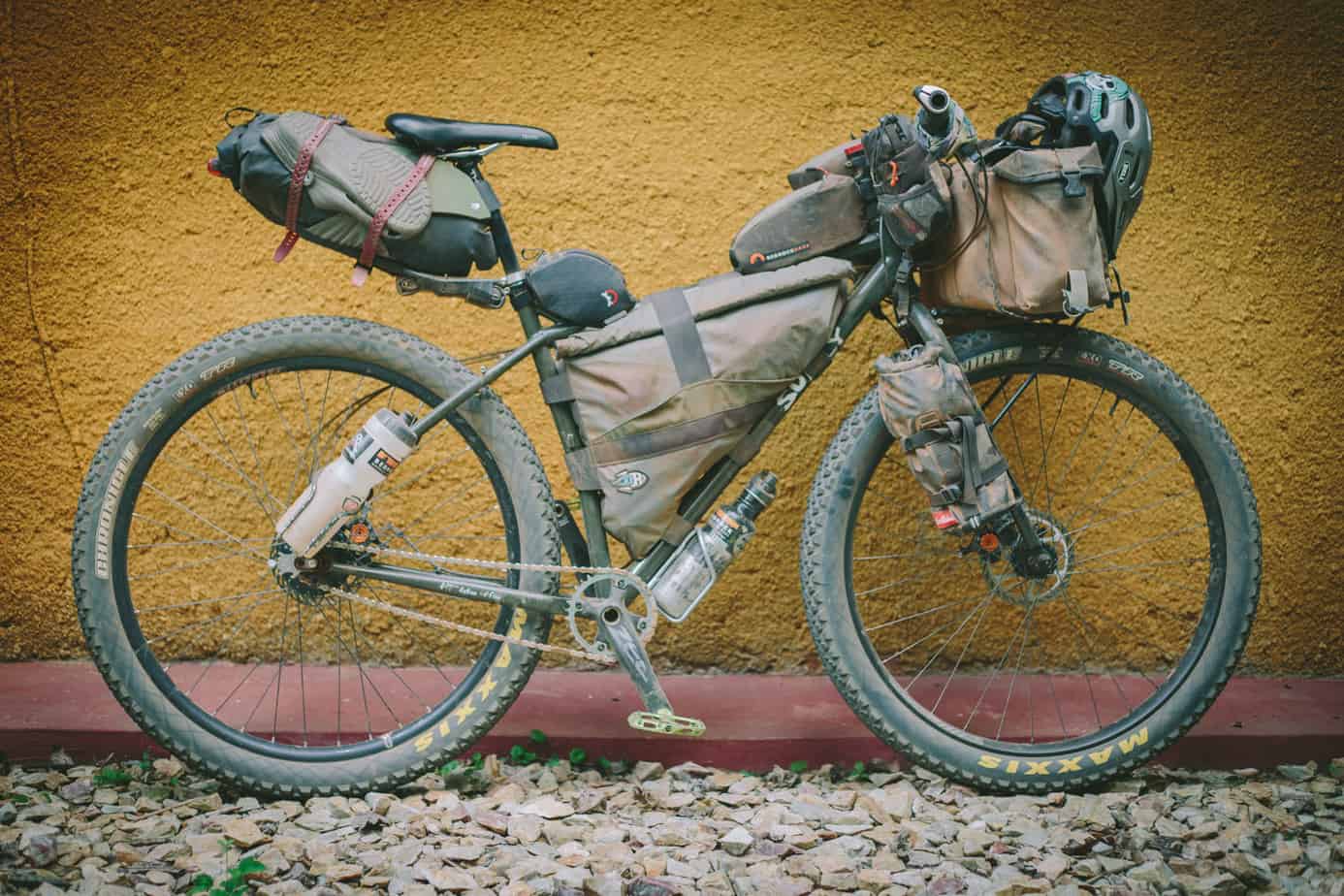 From the moment our plane departed, we both ached to return. Time usually heals such wounds, but not this one. So we set out to map and cycle the Trans-Uganda, an off-tarmac, 2,000+ kilometer loop starting in the capital, Kampala. Uganda is approximately the size of Utah and sits directly on the equator, Kenya to its east and the Democratic Republic of Congo (DRC) to its west. To the north of the country, bordering South Sudan, is an arid plain, flanked by Kidepo National Park. To its south lies Lake Victoria, the largest lake in Africa and the source of the Nile River.

The Trans-Uganda route led us east through the farming communities along Lake Victoria’s northern shore. We followed the Nile River near its source and made our way across tracts of fertile volcanic soil on the slopes of Mount Elgon, a massive 14,177’ (4,321 M) extinct volcano that creates Uganda’s eastern border with Kenya. The undulating hills and countless waterfalls are breathtaking and beguiling. In a place where one might expect to find serenity and solitude, there are, instead, people… lots of them. In the most populated region of Uganda, there is no opportunity for quiet reflection. But, where calm and quiet are lost, the joy of roadside conversation, high-fives, “well done”s, and laughing children is found. 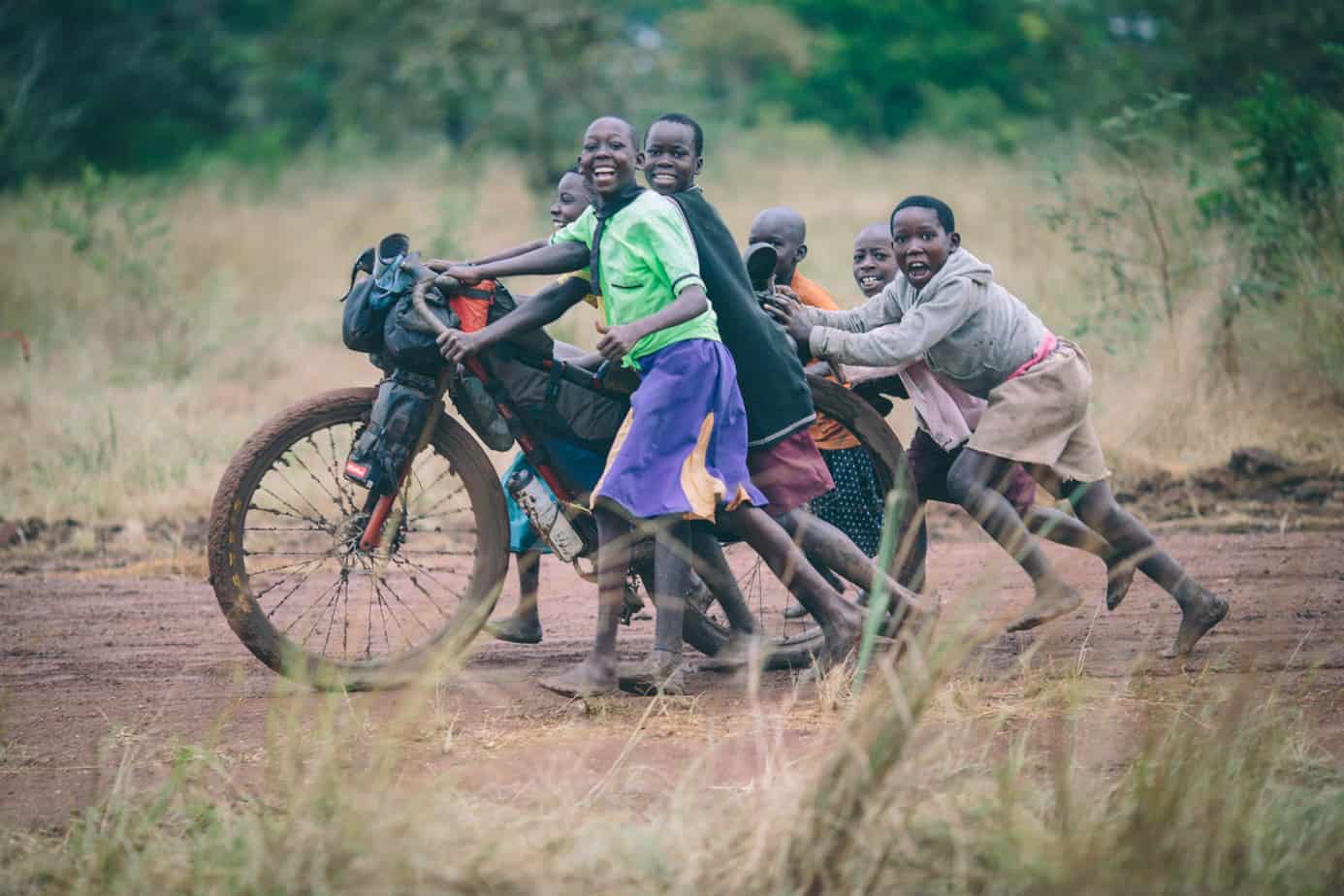 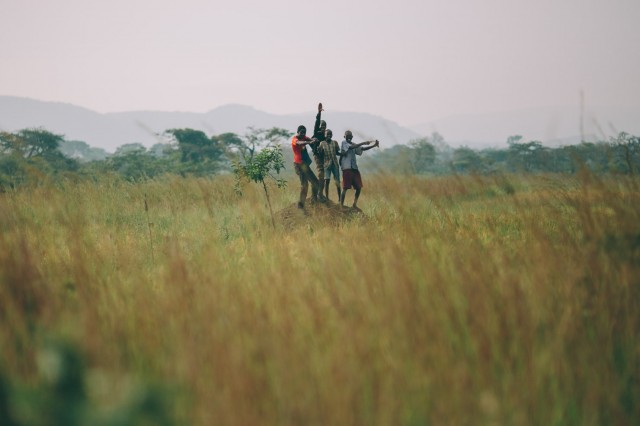 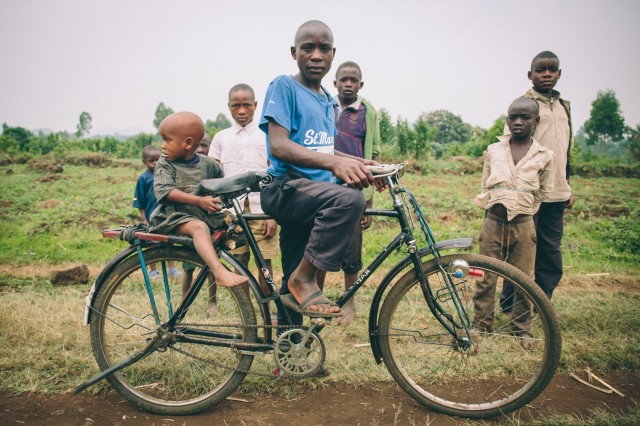 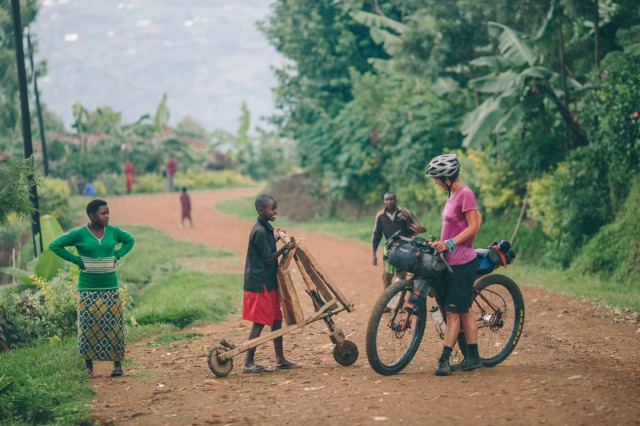 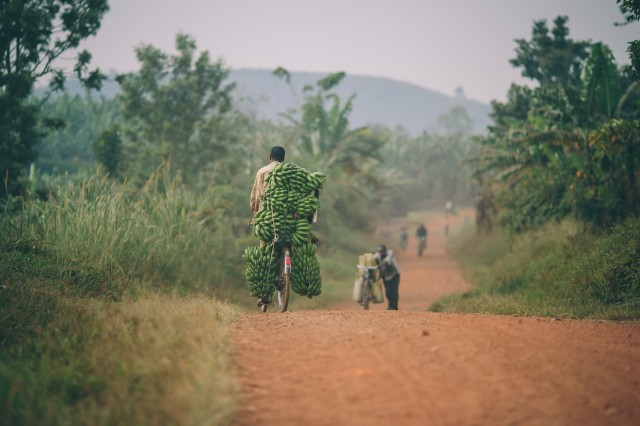 After descending Elgon, we slipped into Uganda’s central region and a web of tertiary dirt roads, rail trails, and footpaths which meander in and around the tributaries north of Lake Kyoga. Scenery changed and the riding was completely different. The slow churning of pedals was replaced by high speed grinds up and down dusty rolling hills. Crumbly dry farmland replaced the lush mountainous slopes of Elgon. In the districts of Soroti and Lira, the impact of Joseph Kony’s Lord’s Resistance Army (LRA) is still palpable. The years of unfathomable brutality and violence have left scars…on both the people and their environment.

From Lira town, we made our way westward. From the moment we arrived in Masindi, things were different. For the first time in several weeks, we weren’t the only Mzungu in town. Tourists actually visit the western and southern regions of the country. The Albertine Rift Valley, which extends from the northern edge of Lake Albert (Uganda and the DRC) to the southern end of Lake Tanganyika (Tanzania and Zambia) is made up of dense montane forests, spectacular mountains, and deep rift valley lakes that are teeming with life. This area is, in fact, considered to be the most species-diverse region on the African continent. As such, Uganda’s most popular attractions lie along its length. 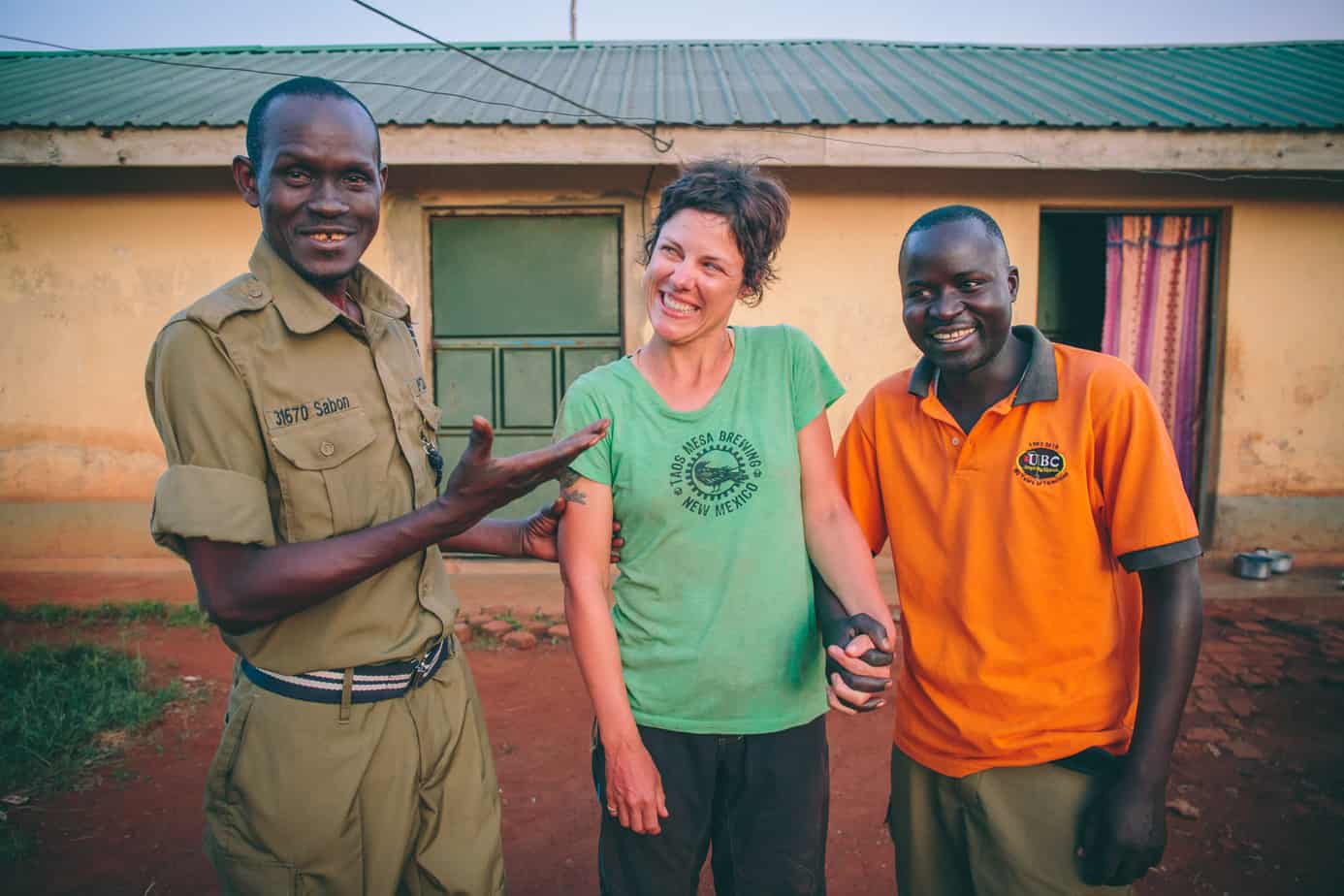 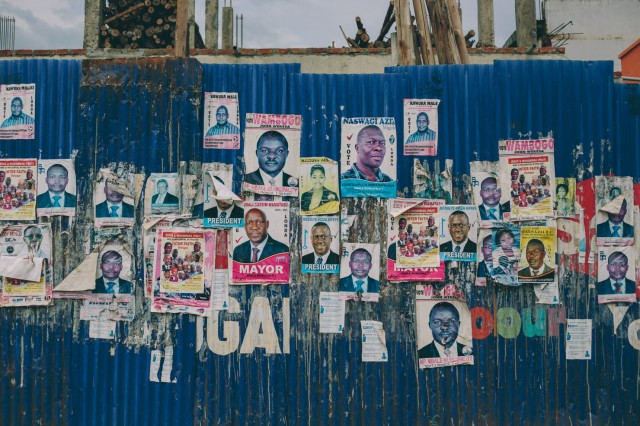 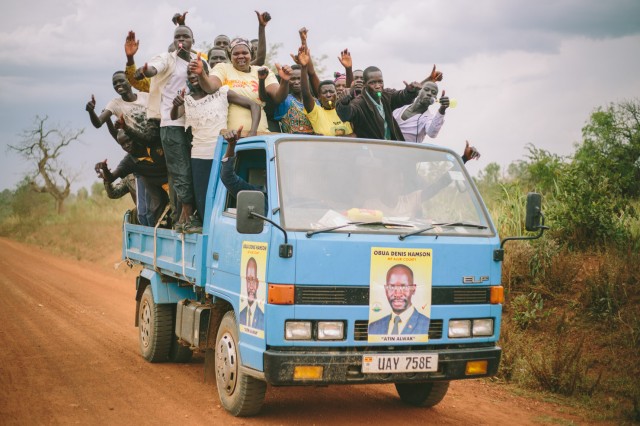 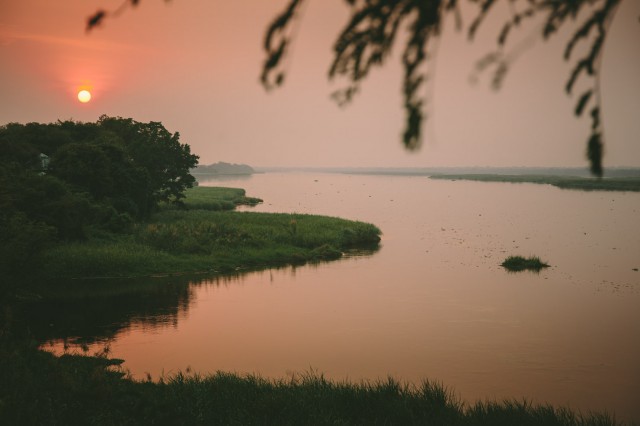 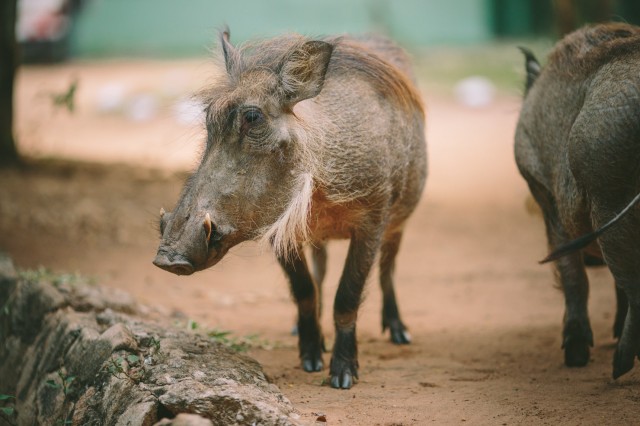 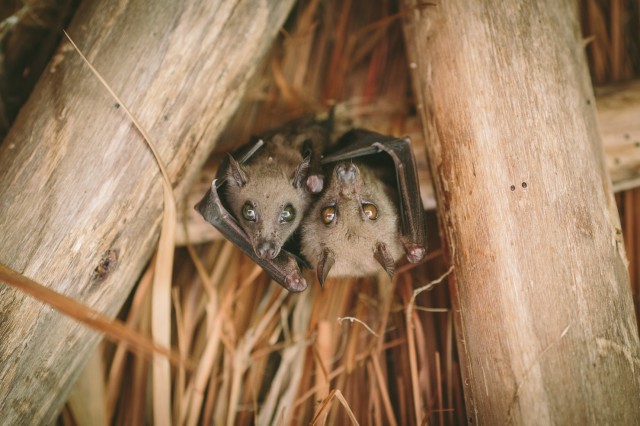 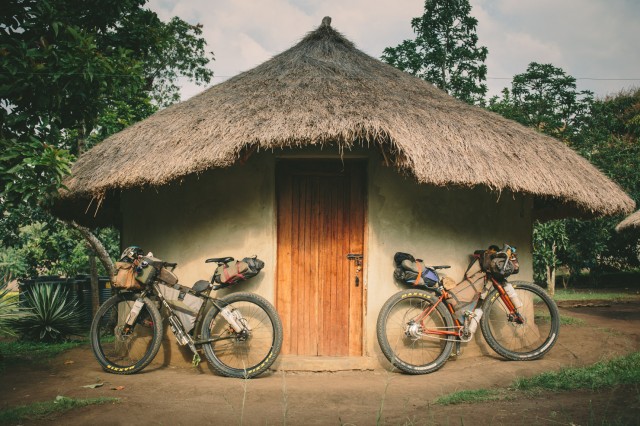 Near the rift valley’s northern terminus, we cycled through a small sector of the Budongo Forest and had a chance, if somewhat terrifying and very brief, encounter with a family of non-habituated chimpanzees en route to Murchison Falls National Park. We treated ourselves to a safari in the park and then made our way back to Masindi Town before heading further south. After a few days of rough climbing roads through remote villages and fields of sugarcane, we arrived in the tourist and expat haven that is Fort Portal. From there, we navigated through a landscape dotted with beautiful crater lakes and made our way to Kibale National Park, where we had the privilege of spending some quality time with a number of our closest relatives, one of these chimps was very laid back about the whole encounter and managed to plop down about 5 feet away from Gin. After leaving Kibale, we cycled our way to the foothills of the Rwenzori Mountains, which, like a giant fortress wall, create a border between Uganda and the Democratic Republic of Congo (DRC). “The Mountains of The Moon”, as they are often called, seem to violently erupt from the earth, there jagged, glacial peaks mirroring the tension and instability that have plagued this region for so many years. Heading south from the Rwenzori, we cycled through Queen Elizabeth National Park, where we enjoyed a few animal sightings right from the saddle… Cape Buffalo grazing along the side of the road, a small herd of elephant crossing it and countless sightings of all sorts of monkeys, birds and lizards. 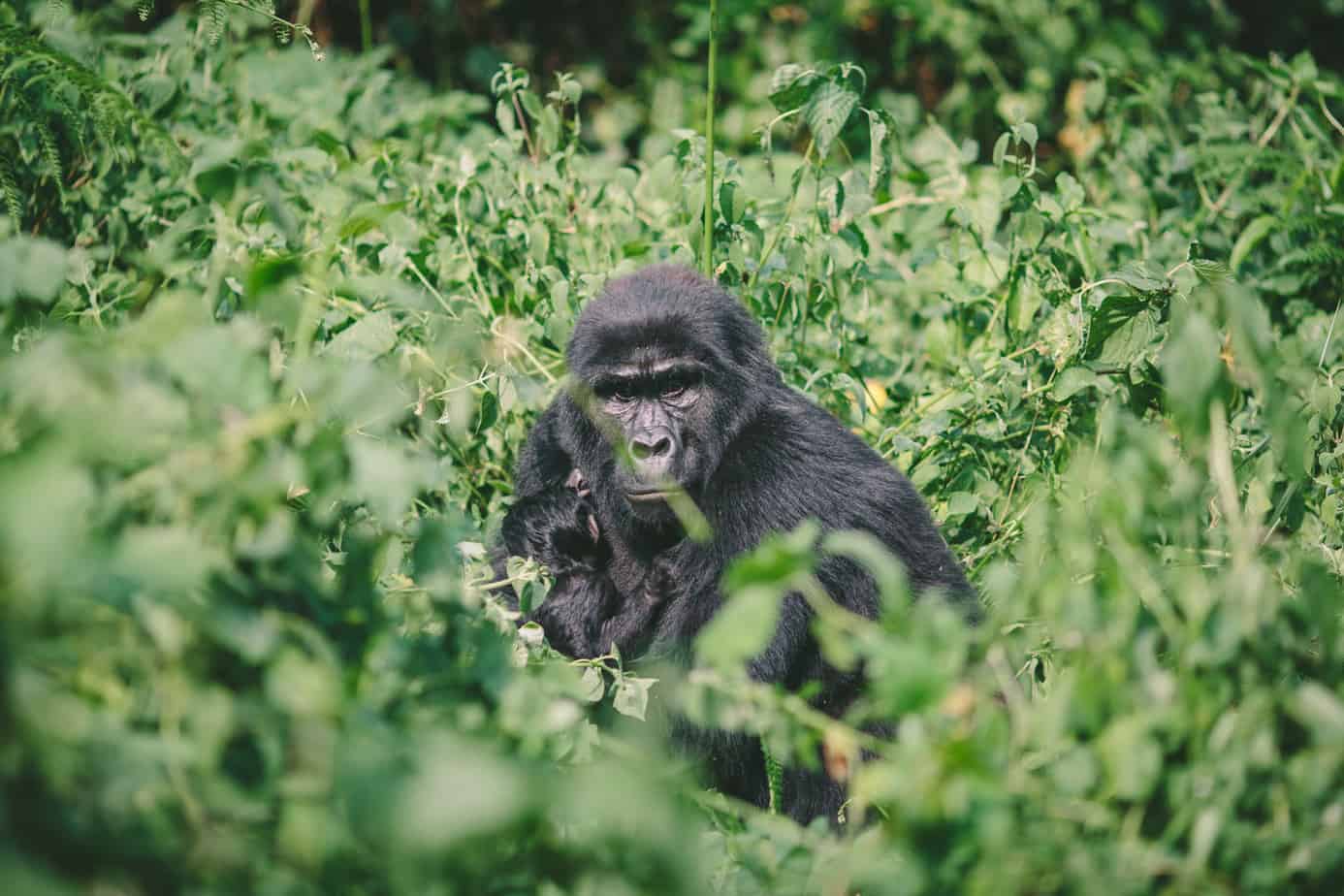 The most southwestern of Uganda’s national parks is Bwindi Impenetrable Forest. Getting there was a bit of a chore, slow climbs along dusty and remote roads just a stone’s throw from the DRC. But, like the vast majority of the places we’ve cycled, the pay off more than makes up for the work. Bwindi’s mist shrouded walls and dense jungle are truly enchanting, and its most famous inhabitants, the critically endangered mountain gorilla, are magnificent. Bwindi is home to approximately 320 of the 880 mountain gorillas alive today. While staying at a small community camp in Buhoma, we were treated to an unexpected visit from one of Bwindi’s resident gorilla families, the Rushegura. We were lucky and the brief period of time that we spent in their presence was a humbling experience. 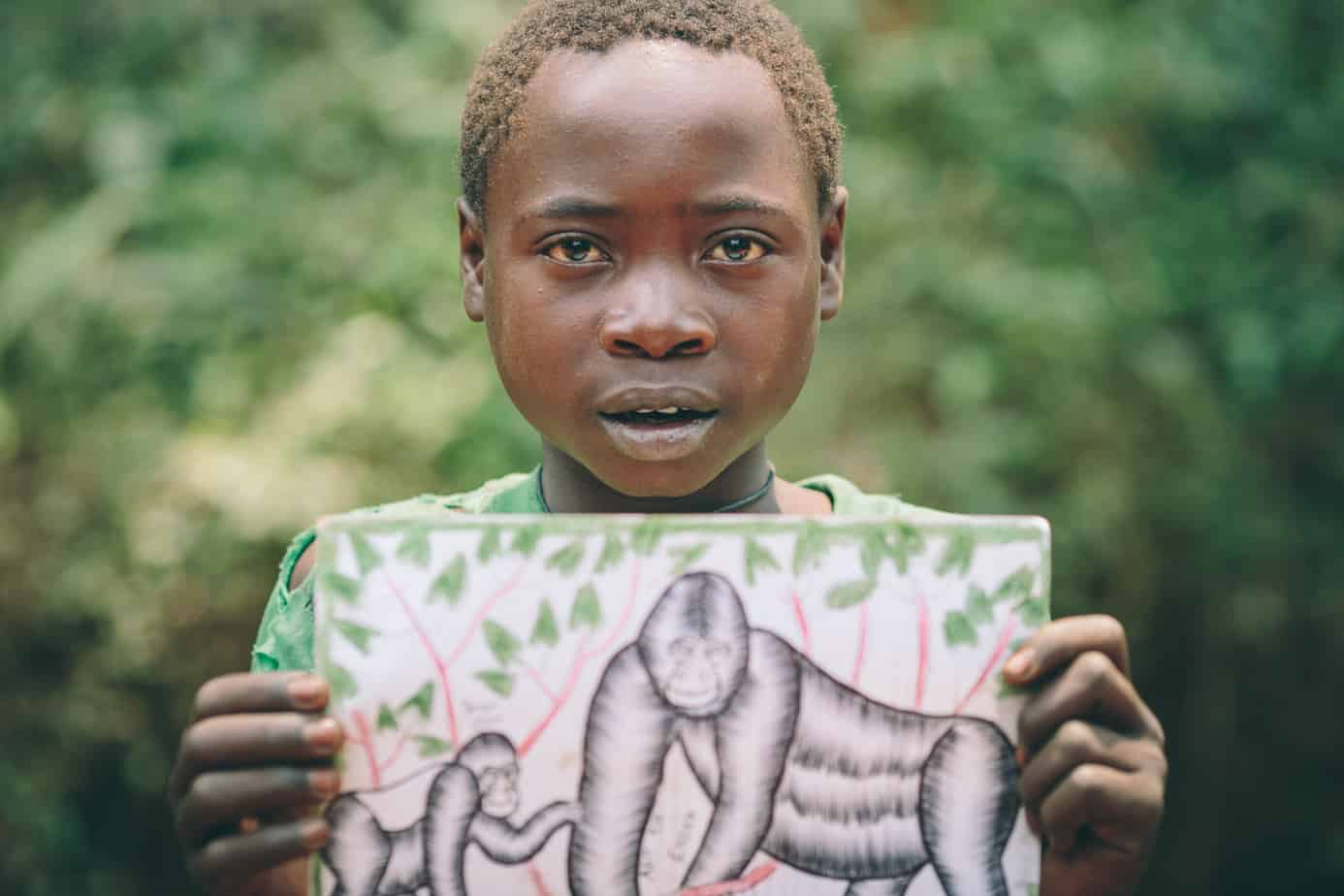 As we made our way past Lake Bunyoni and closer to the Rwandan border, we were excited. The anticipation of a new experience and new culture is hard to resist, but the comfort of slightly more modern amenities is equally hard to deny. There was also a touch of homesickness that was already swelling/developing/growing/setting in… Uganda had become our home, if only for a short while. The recitation of town’s names that made up our route had become a mantra of sorts. “Hello. How are you? I’m fine” rolled off our tongues. High fives and the nuance of Ugandan handshakes had become second nature.  We’d gotten to see those wild spaces and experience childhood dreams. We saw wildlife from a unique perspective that few others have and had political discourse and heartfelt discussions about politics, the environment, life. Of course, these are the highlights of our journey through Uganda. There were lots of dusty, dirty, and exhausting days that filled the space in between, full of seemingly endless series of climbs, tackled with dirt in the eyes and children running alongside us. There were reminders of the pain and unimaginable heartache her people have endured. But we also saw happiness and love in the face of adversity. We saw people who care about their country and family. 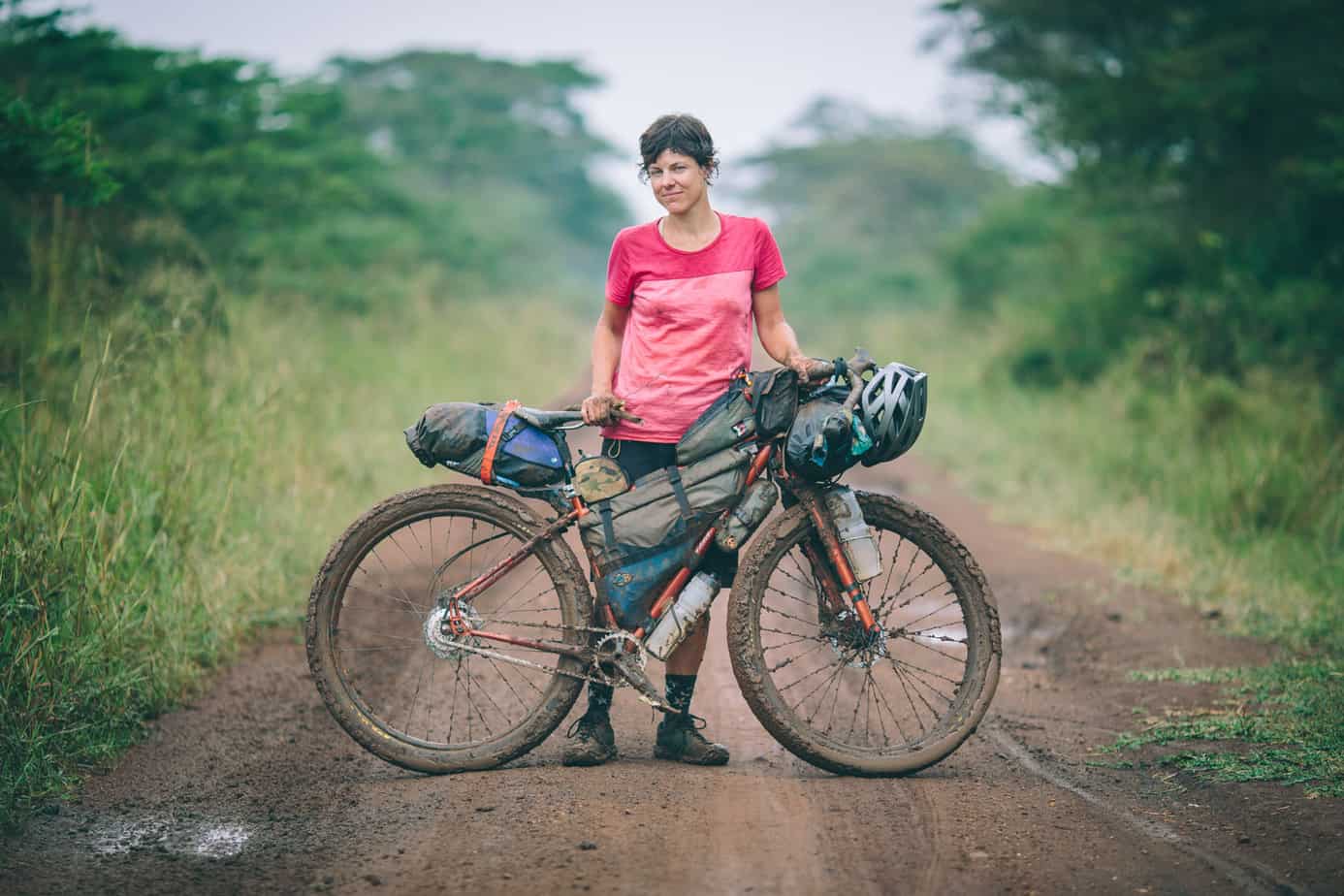 The most unique and cherished of these encounters were with the countless people who were far removed from normal tourists. People in the backwaters who’d never seen a Mzungu before and who wanted to know where we were going, to shake our hands, and introduce us to their children and friends. It wasn’t a selfish affirmation; instead, it felt like we are connecting with these people and reminding them that they live in a beautiful place and there are people who want to visit these forgotten places. Ultimately I feel like we left an impression on them, but there’s no doubt that they left an indelible mark on us. I’m sure within a matter of months memories of their smiles and faces will start calling us back to the motherland once more.

Read more bikepacking adventures from Logan, Gin and others at:

I started Mountain biking in the mid-2000′s and quickly fell head over heels (sometimes literally) for the sport. The more I got into cycling the more I uncovered the smorgasbord of adventures that can be tackled on a bicycle. My innate wanderlust was ridiculously amplified as I discovered blogs and information about the wonderfully epic mode of travel that is long distance bike touring. As a former business owner in the stressful world of digital marketing, I knew I would have to make some major life changes in order to make a big trip possible. So in 2012 I was able to merge my company, change direction and set out on my first long-distance bike tour… which led me to create Pedaling Nowhere. While documenting our travels, I realized that I enjoyed keeping a blog. It enabled me to purposefully practice several hobbies that I am very passionate about including photography, design, DIY projects and continued bike travel. 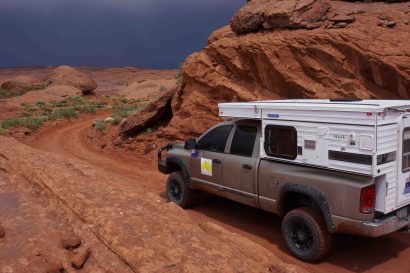 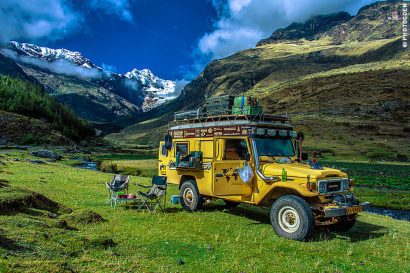 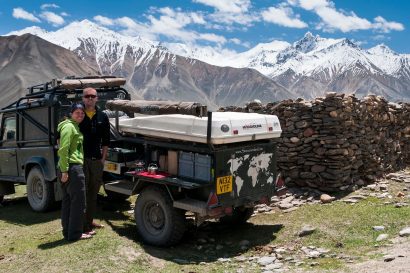