Just a couple of years ago, any review of a fatbike had to begin with a carefully worded preamble, a convincing declaration that the fatbike is not a fad, a novelty, or an alternative to a real bike. Thankfully, such formalities are no longer necessary as fatbikes are here, confirmed as legit, and frankly, everyone is doing it. There are however, some clearly doing it better than others as evidenced by the Salsa Cycles Beargrease.

Now in its second year in full carbon, the Beargrease already has a loyal following and understandably so. When it first hit the market, the Bear’s full carbon frame and fork instantly recalibrated rider expectations of what could be achieved with a fatbike. Gone were the assertions that all big-tired bikes had to be slow and heavy, and in short order the Beargrease was snatched up as a high performance whip for snow racing and spirited rides on all surfaces. A sure sign of success, it has also been widely imitated, if not outright cloned by competing brands. 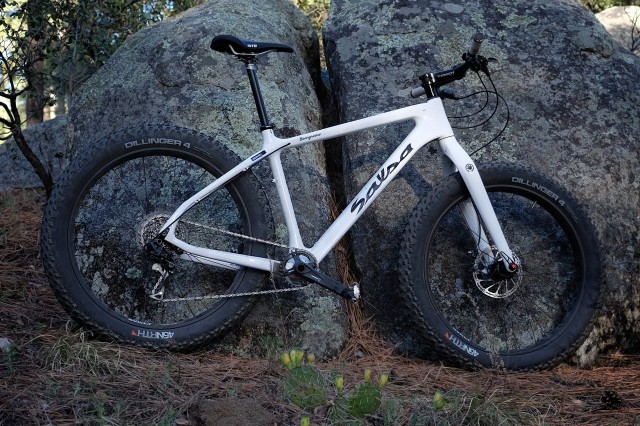 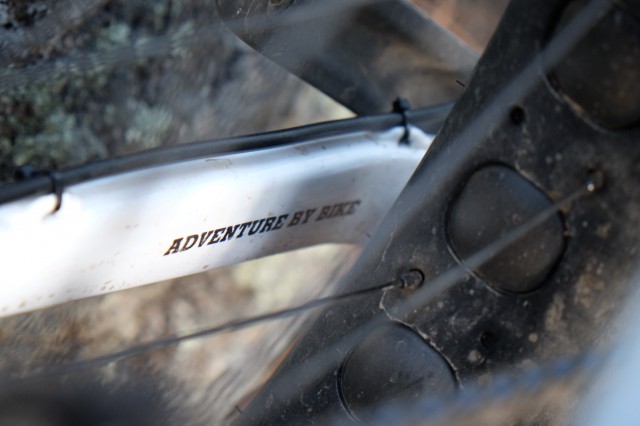 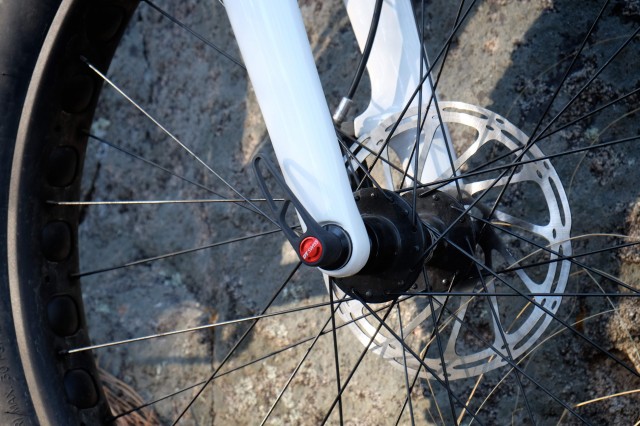 For 2015 the Beargrease line received modest tweaks and is currently offered in two carbon fiber variants and one entry level aluminum-framed bike. The top model is packaged with carbon rims and a full SRAM XX1 drivetrain and is a sight to behold. The $5600 price tag puts it out of reach of most consumers, but speaks to the direction of the once kitschy fatbike. The $3699 Beargrease Carbon 1 is still not an insignificant investment, but given the bang-for-buck ratio, I would say it is actually a very sound value.

Both of the carbon Beargrease models feature one of the more impressive frame and fork combos in all of mountain biking. The downtube is massive with the bottom bracket junction an imposing chunk of carbon like nothing I’ve ever seen before. The wide flare of the 177x12mm rear spacing paired to the huge tubing diameters gives the Beargrease a sense of purpose––that being the delivery of every precious watt of power to the rear wheel. On the sharp end, the full carbon Makwa fork is not just beautifully shaped, it has the lateral stiffness needed to carve hard turns with authority. This is a bike that charges hard and begs to be pushed to the limits of traction. 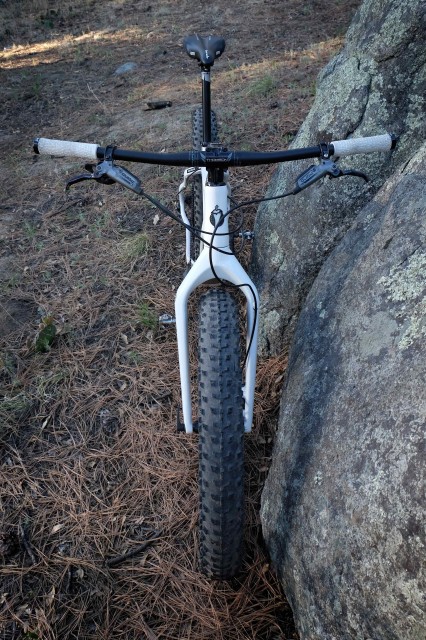 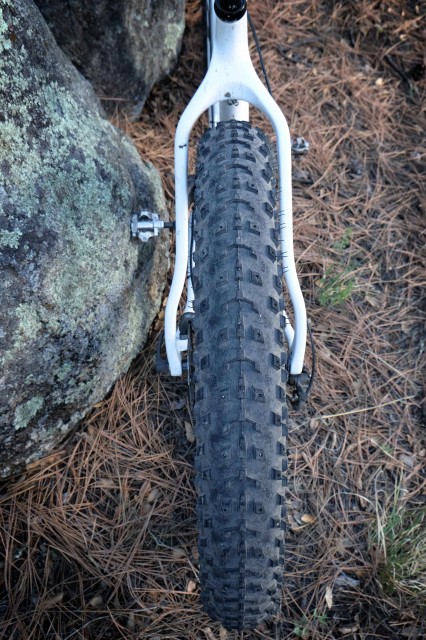 The lines of the Beargrease are elegant and imposing at the same time.

Following in the large footsteps of the Bucksaw, a bike I also adore, the Carbon 1 employs a 1×11 drivetrain, this time using SRAM’s X1 components. I have bikes fitted with SRAM’s XX1 and XO drivetrains and the price point X1 shifting is just as accurate and precise as even the top tier setup. The 30×42 bottom gear ratio provides the low end grind required for plowing through deep snow or conquering the long and steep climbs near my central Arizonan home. What goes up must come down and SRAM’s newest DB5 single piston caliper brakes do an admirable job of slowing the Beargrease. For our mountainous region, the dual piston Guide RS brake might be better suited to our high-speed downhills, and may be the one thing I swap out in the coming months.

The one significant change over the 2014 Beargrease, outside of the one-by drivetrain, is the reduction in rim width from 85mm to 65mm. This not only carved out a few critical grams from the wheels, it gives the 45North Dillinger 3.8 120 tpi tires a more rounded shape with a bit more compliant interface with the trail. 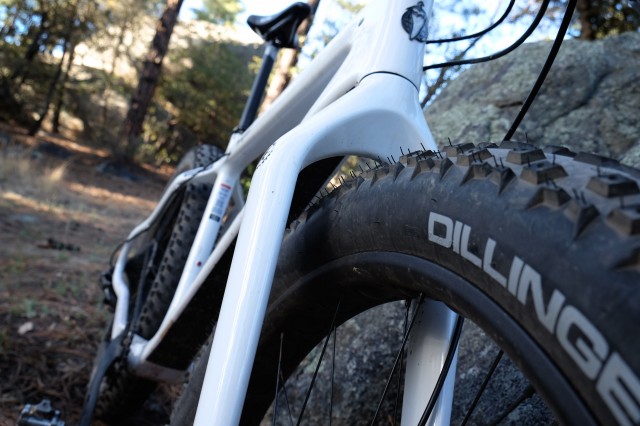 The fork on the Beargrease just might be the most stout, accurate, and steadfast fork I’ve ever ridden. Point and shoot. It holds a line with tenacity.

At 27 pounds, the Carbon 1 is not ethereally light, but once in motion it feels surprisingly spry. I was able to quickly shed an additional pound of wheel weight by converting to a tubeless setup, something that was a total hassle, but worth the effort. The wheels feel much more lively and responsive to inputs and power.

The handling of the Beargrease is quick but not nervous and displays all of the favorable attributes of a performance oriented machine. The wide 750mm bars allow me to really yard on the controls in a hard lean, the fork not yielding a nanometer of flex. Coaxed into a mean turn, it holds a line with tenacity. The result is an ear to ear grin that persists until the trail has no more turns to burn.

As a Bucksaw owner, I find I ride out of the saddle more frequently on the Beargrease, which is no real surprise. The Bucksaw’s suspension permits more seated pedaling, just as the rigid Beargrease feels more natural while standing and hammering on the pedals. In that, the Beargrease climbs briskly, even over chunky terrain. Because it lacks any suspension at all, I do find I spend a little extra energy and attention keeping the front wheel planted, but that’s only on trails with gratuitous bumps, rock and chunk, places where the Bucksaw excels.

It’s another beautiful offering from Salsa Cycles. Without talking to their designers, or reading their marketing materials, it’s evident in just my initial ride that their intended result with the Beargrease was to offer the rider the precision and performance of a high end racing rig, but with the addition of 4-inch tires. They nailed it––again. 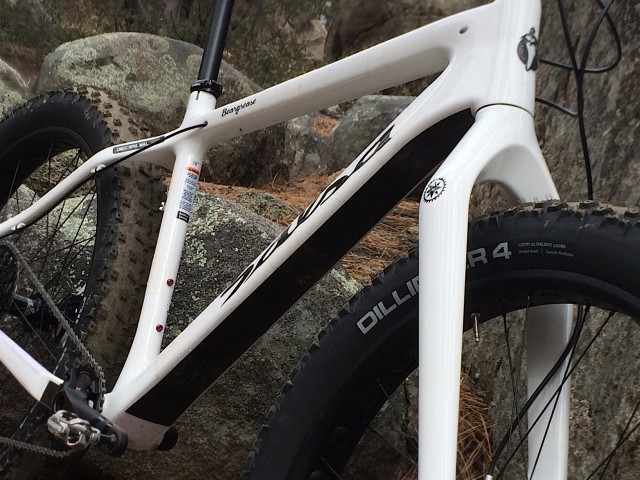 *Editor’s Notes: I did eventually swap out the brakes to SRAM Guide RS hydros with 160mm rotors in the rear, 180mm up front. The stopping power for our steep downhills is much improved. I also added a longer Thompson stem because, well, I have high ape index; long arms.