The 1980s were defining for Honda. Stalwart models like the XR600R and the XRV750 Africa Twin won numerous Baja 1000 and Paris-Dakar Rally victories, ushering in over a decade of global powersports domination. Adventure motorcycles were gaining popularity, and Honda’s Transalp XL600V made a short appearance in the United States from 1989 to 1990. Life was good for Big Red, but its ADV glory would slowly fade over the next few decades—until the debut of the CRF1000L.

The adventure motorcycle community has been waiting for the new Africa Twin; early sketches and teasers have kept forums and blogs reeling with every new detail. Speculation achieved a frenetic pace when a muddied and incomplete prototype graced the stage at the 2014 EICMA show in Milan, Italy. It was clear that Honda was serious about constructing a true adventure machine, but details were veiled. Again, we waited. This changed when I swung a Sidi boot over the new CRF1000L in early May in Moab—a location that would prove to be the perfect testing grounds for the bike. 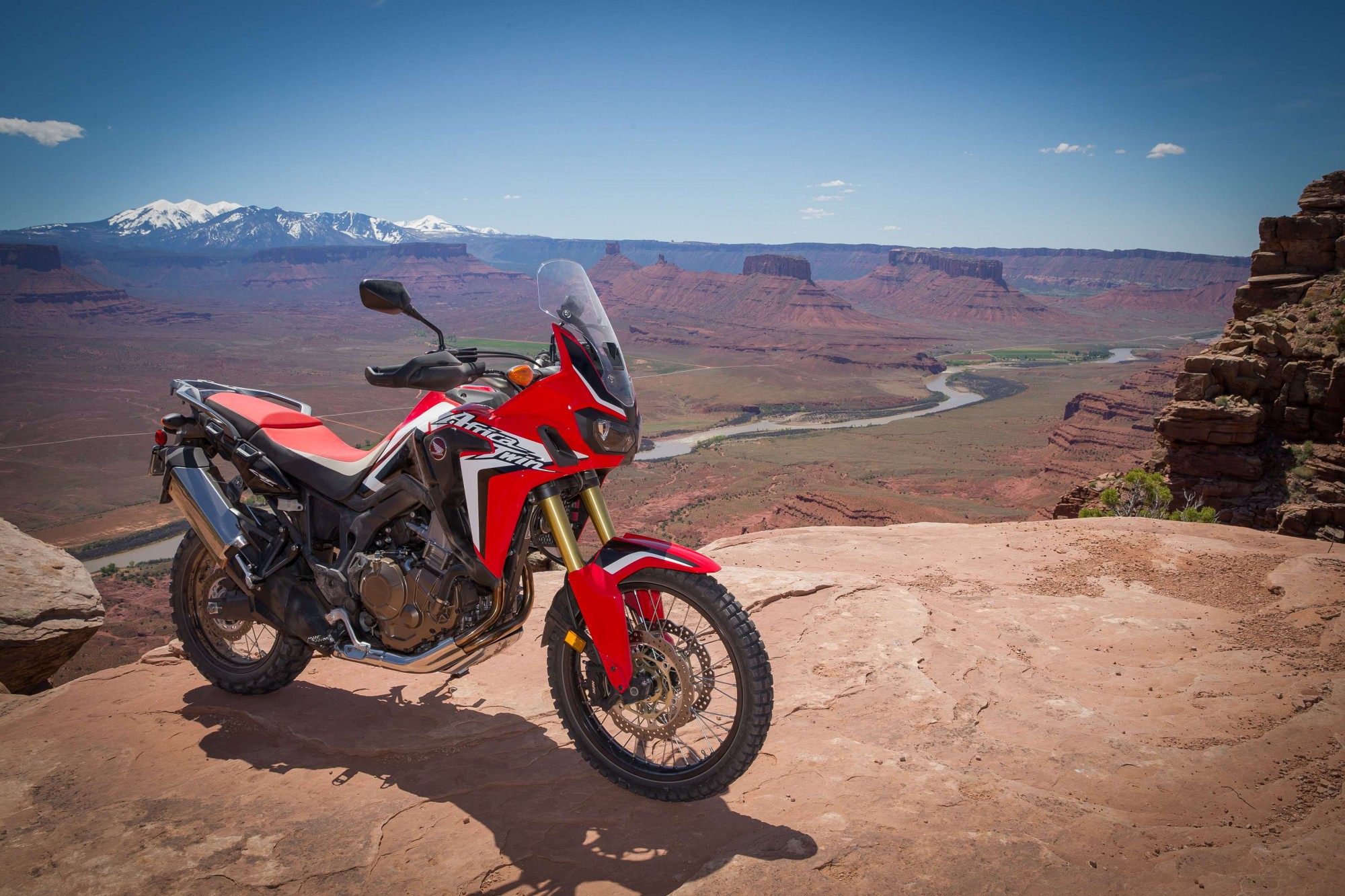 I will share the good news right off the start—the Africa Twin rips on the dirt. For a 500-pound motorcycle, it rides far lighter and more effectively than its weight or classification would indicate. Most of this is owed to the narrow forward portion of the seat and appropriately sized wheels (21-inch front, 18-inch rear). The suspension is also surprisingly flexible and rewarding in this day of electronic adjustment and automatic load-leveling. After a short trail briefing from Baja 1000 motorcycle champion Johnny Campbell, I removed the rubber peg inserts and rolled the handlebar up to accommodate a more comfortable standing position. As I started the 998cc parallel twin, the motor settled into a smooth idle and a welcome rumble resonated from the exhaust. Throttle modulation was linear and predictable, allowing fine adjustments in concert with the clutch; this was an advantage on Moab’s ledges and slickrock.

Throughout the day, my assessment of the bike kept returning to the confidence it instills in the rider. It was simple to operate yet exceedingly capable; a rare trait in most large adventure motorcycles. Within minutes I was looking for bigger rocks and ledges, pushing the limits of traction and damping. For most of us that ride big bikes, sand is our nemesis—not so with the Africa Twin. It is without question the easiest of the large ADV machines to operate in the sand. I credit this to the combination of its modest weight and 21-inch front wheel. The bike’s geometry is another factor, as the same frame angles that make it stable on the highway also help on low-flotation surfaces. 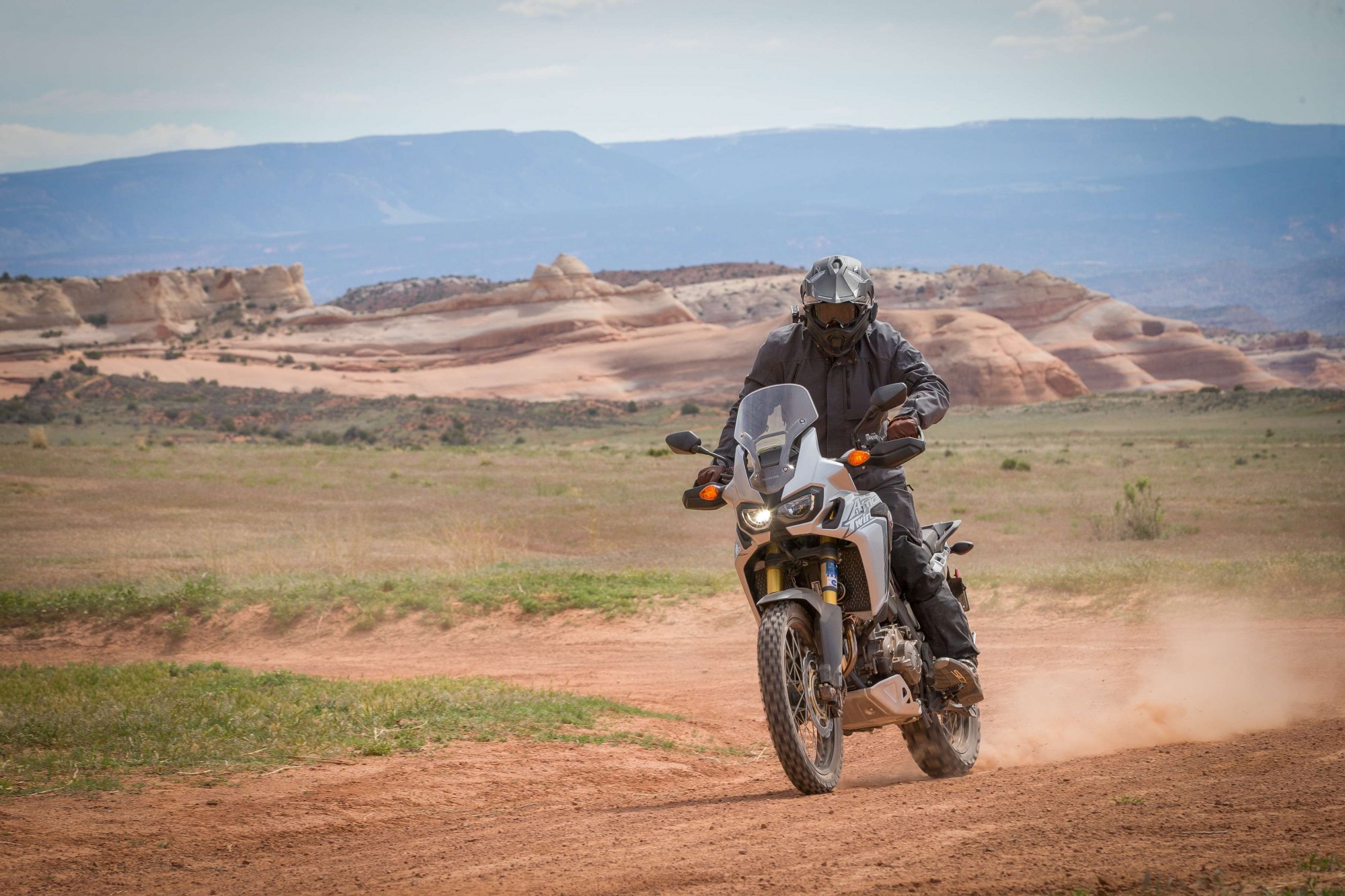 The suspension is compliant, nearly approaching soft, but the lighter damping is appropriate given the long stroke (230 mm front and 220 mm rear). Even under significant G-outs at speed, the fork never imparted a hard bottom, remaining stable and predictable. A curious complaint I have read with regard to its 98 horsepower is that it needs more power. This is laughable and reflects the critics’ limited experience in both dirt and international travel. Even the 162 horsepower of the KTM Super Adventure is electronically limited to (you guessed it) 100 horsepower in dirt modes—nearly the same as the CRF1000L. Power was more than adequate for every scenario we encountered, from gravel roads to slickrock ledges. Another pleasant surprise is the ability to shut off traction control and the rear ABS in the dirt. Don’t worry that the front ABS cannot be disengaged, it is well-tuned and I preferred it to remain on.

The CRF1000L is exceedingly comfortable on long stretches of highway; the wide and supportive seat takes pressure off the sit bones while the windscreen all but eliminates buffeting. Although the windscreen is not adjustable, it works well, besting most of the competition. 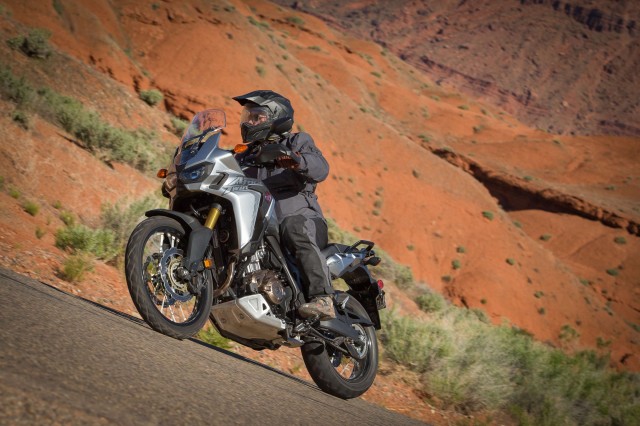 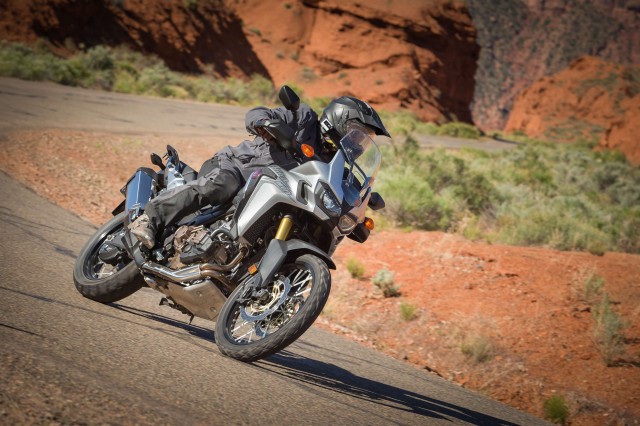 The motor provides more than enough power for two-up or fully loaded adventuring. At higher speeds the Africa Twin is smooth and stable, with none of the dreaded wobble or wander, and it pulls strong to well north of triple digits. The bike’s lack of cruise control will contribute to rider fatigue though. One could easily compare the CRF1000L to the larger displacement adventure bikes, but this motorcycle has exactly what we want in a global touring platform. 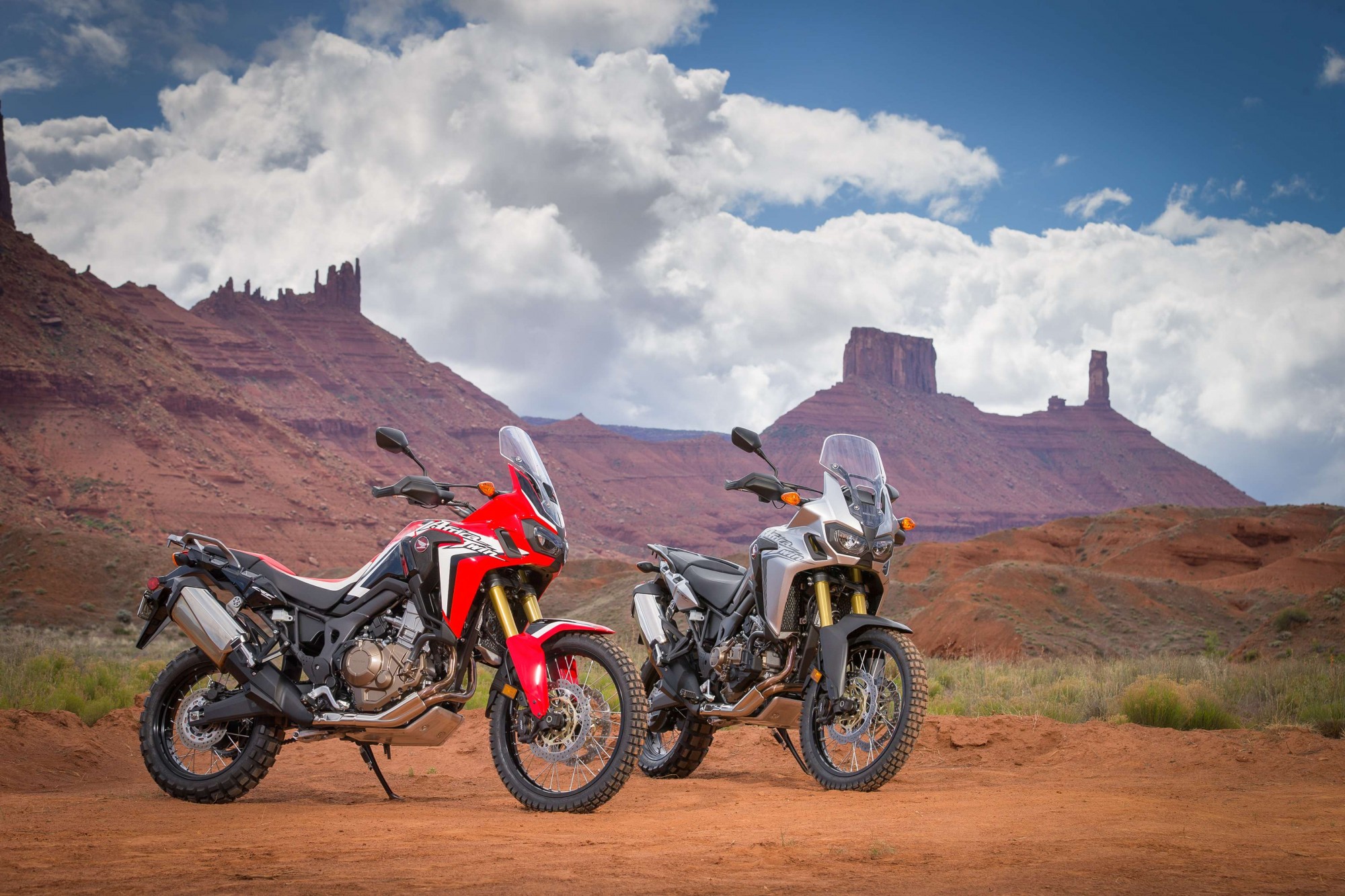 The 2016 Africa Twin is certainly not perfect, but it does combine several exemplary traits. The first that stands out is Honda’s legacy of reliability and serviceability, something I have experienced from my first dirt bike (an XR250L) to our recent XR650L project. Honda has won dozens of Baja 1000 victories because their bikes don’t quit. As an adventure traveler, I view durability and capability as stalwart attributes, and am happy to give up gadgets and CAN bus wizardry for a machine that will start every time. I cannot overstate how competent the CRF1000L was in the dirt, defying several laws of physics as I tossed it over jumps, ledges, and boulders. What really impressed me though was the $12,999 price tag—that leaves a lot of money for fuel and visas. powersports.honda.com, 866-784-1870

Capable in all types of terrain

Gauges are nearly impossible to read while standing 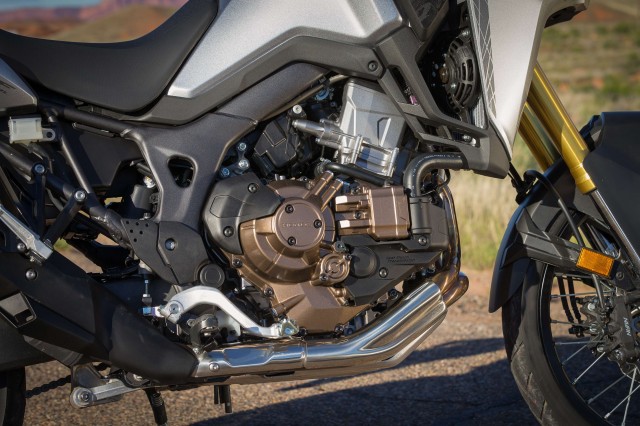 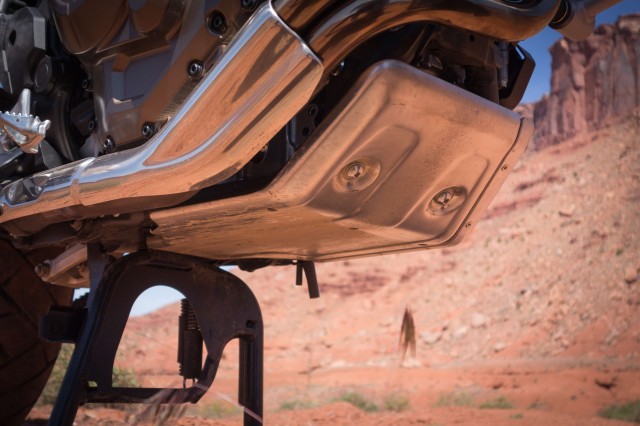 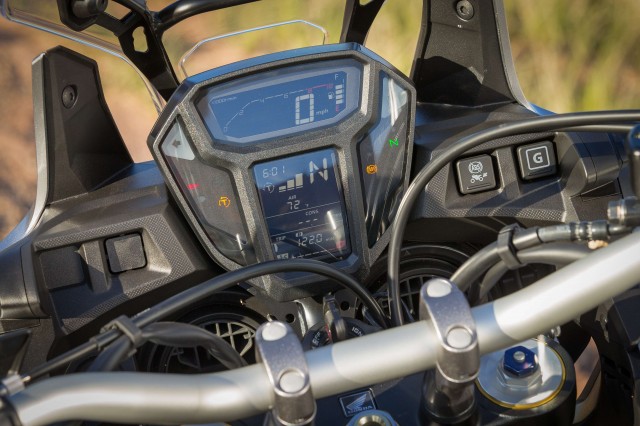 The Africa Twin is available in a DCT variant, which costs an additional $700 and adds 23 pounds to the GVW. This is the feature I have been asked about the most, so a sidebar and a healthy dose of candor are warranted. In use, the DCT is a marvel of engineering and allows fully automatic control of the transmission. The rider simply starts the bike and pushes the D-S toggle to engage first gear. Rolling onto the throttle, the system smoothly modulates the clutch and off you go; shifting happens automatically all the way through sixth gear. It works exceedingly well in technical terrain and will never stall, despite how slow you move. Additionally, computer control will no doubt extend the life of the clutch. 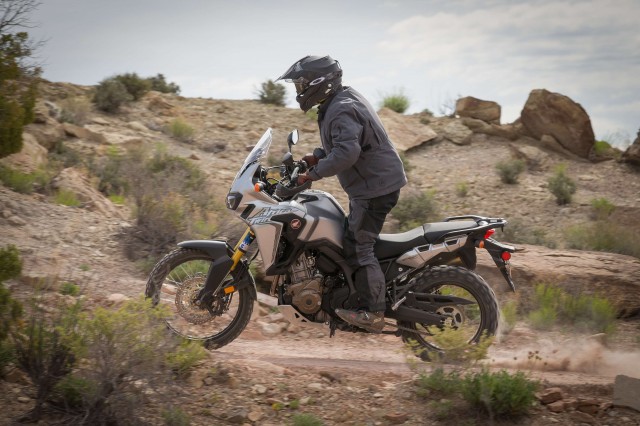 Having stated its positive attributes, I still want to be able to shift my own gears and fully acknowledge the vanity and nostalgia of doing so. The CRF1000L manual transmission is a pleasure to operate and the clutch is light and precise to modulate. Call me a Luddite, but I have left my lights on more than once, returned to a dead battery, and had to bump start my bike; this is impossible to do with a DCT. The lack of manual control of the clutch also limits a few advanced actions and one naughty one. When stuck in deep sand, the technique of selecting second gear and grabbing a handful of throttle before dumping the clutch will often help. This typically launches the bike from its resting place in a similar fashion to a Harrier Jump Jet. I also use the clutch to initiate a loft over larger ledges and logs, which is much more difficult to do with a DCT. Oh, and there is that naughty bit too…everyone loves a second gear wheelie!