Standing on the crest of a raw red dune I was straining my eyes to catch a glimpse – any glimpse, no matter how small – of a marker or post that indicated the present day border of the Northern Territory and Queensland. We were just under 113km (exactly 70 miles) directly north of Poeppel Corner, where the borders of South Australia, Northern Territory and Queensland come together in the sea of sand that is the Simpson Desert.

Over 120 years ago when Augustus Poeppel (pronounced Peppell) carried out his survey of the SA/Qld border and then the NT/Qld border he had supposedly marked it with a post or peg every mile and a major post every 10 mile. For the more significant Corner Post he had a 7-foot long post cut from a coolibah tree on the Mulligan River flats some 100km east and dragged to its resting place by camel.

A short time later Poeppel discovered his survey chain (22 yards long) was stretched by over an inch, so the last section of the SA/Qld border was re-surveyed by a young Larry Wells, Poeppel’s 2IC. He placed the corner post in its current position in 1884, near the crest of a sand ridge just to the east of what we now call, Poeppel Lake. 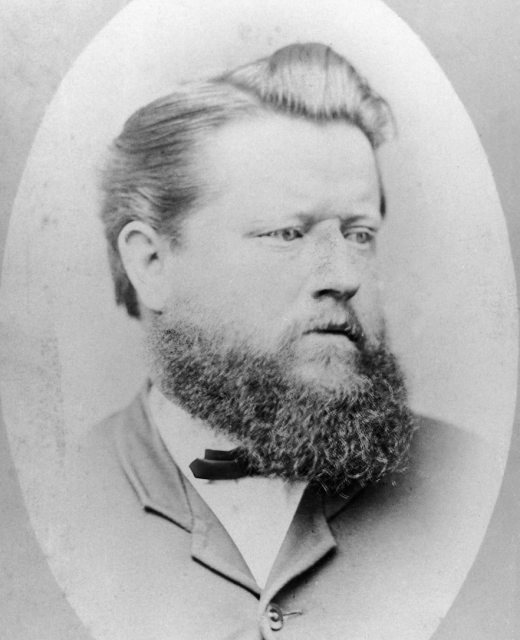 Next seen by Ted Colson in 1936 when he crossed the desert on camels, the post was recovered by Reg Sprigg and his family when they made the first vehicular crossing of the Simspon Desert in 1962 – it now resides with the History Trust in SA. The replica that stands at the corner today is visited by nearly every Simpson Desert traveller, which number about 4000 or more every year!

The border line we were following north though, doesn’t exactly follow the 138th Meridian of Longitude as Poeppel and his men had been instructed. Because of the relatively poor standard of the survey equipment of the day the border post, even after Wells’ re-positioning, was still out by modern mapping standards by about 110m, while the error is around 330 metres at the Gulf. But the border, as marked, is what is still recognised today – a High Court and then a Privy Council decision back at the turn of the 20th Century, regarding the South Australian-Victorian border, set the seal on any similar dispute – but that’s another story! 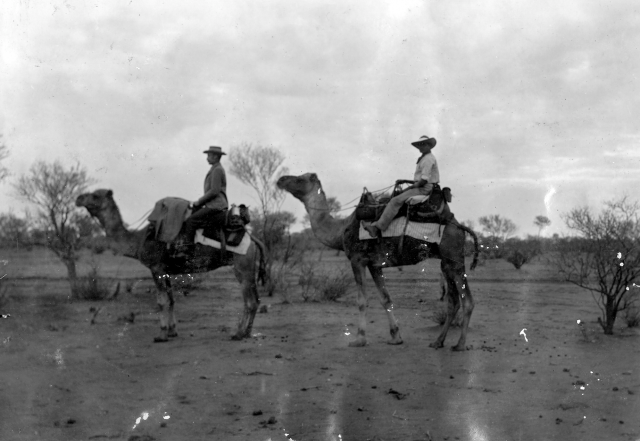 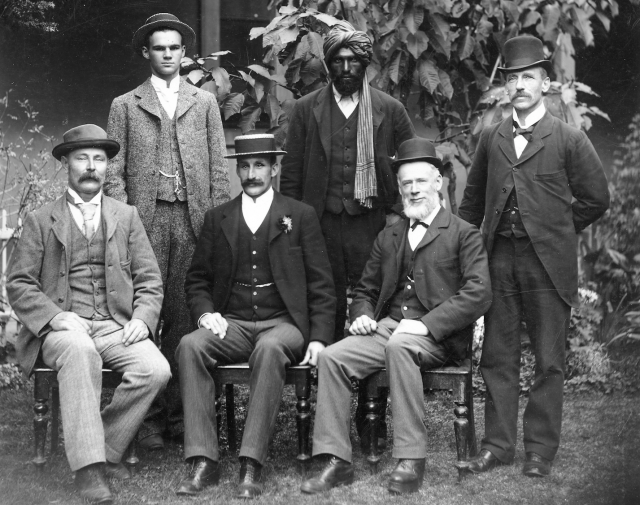 We had found one border marker (a star picket) from the re-survey carried out in 1986 and beside it what we believed was the remains of an original post. Now we were looking for the 70-Mile peg and we could guess, from the vast burnt out area we were then travelling through, that there would be no chance of an original post here. It’s probably the same in all of the Simpson, although maybe a lucky, termite-resistant one still stands.

Even so the cluster of star pickets that marked the 70-Mile point was easily missed and it took a call over the UHF radio by one of our keen eyed adventurers to bring my attention to it. It was a good find and after a few pics we pushed on, happy with ourselves, across the relative smooth going of bare red sand towards any other historic point we could find in this part of the northern desert.

Four days later we were out of the desert and into a vastly different landscape of savagely hewn rock and contorted hillsides along the Nicholson River, just upstream from the well-presented Kingfisher Camp, a low-key tourist enclave on the surrounding Bowthorn Station (ranch). Earlier I had spoken to owner, and asked him about tracks further west along the border, which their pastoral lease covers and he put me straight about the country out that way. 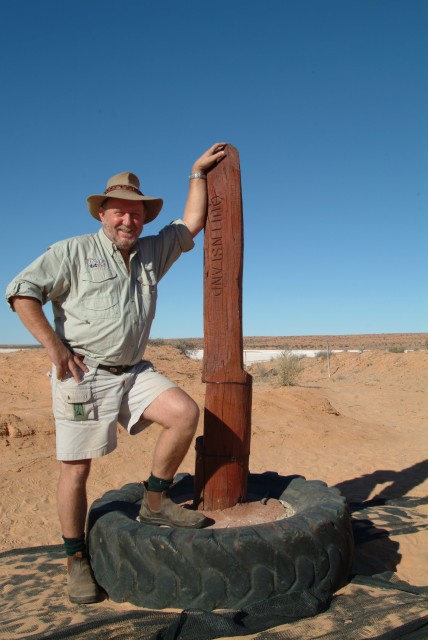 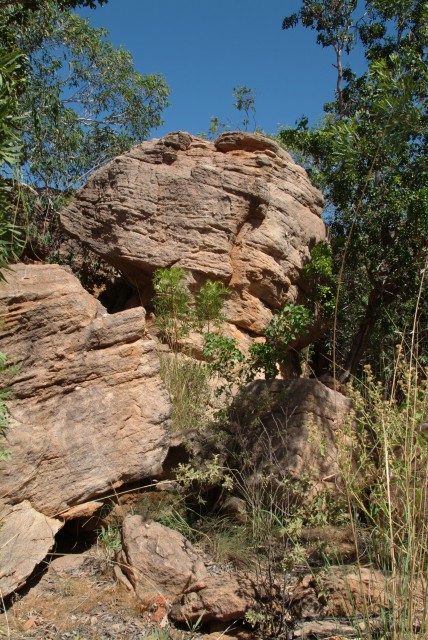 “There’s no tracks out there – you can’t even ride a horse through that rocky stuff – it’s helicopter country! He continued, “Back a few years ago the mining companies pushed a few tracks through the ranges but they haven’t been used for ages and they would be badly washed away, if they still exist!”

It was this very country that had stymied the original border survey party. By this time, Augustus Poeppel had left the group at the 324-mile peg (NW of Urandangi, in western Qld), having been blinded in one eye near the 180-mile post. His replacement was John Carruthers and under his leadership, with Larry Wells continuing as 2IC, the party had pushed steadily northwards across grassy plains. Progress was good until they were over 500 mile from their starting point in the vicinity of the Little Range on the western extremity of present day, Lawn Hill National Park. Continually repulsed by the craggy and uneven country the leaders then decided to detour around the hills and to attack the border line from the vicinity of the Nicholson River. We had done the same. 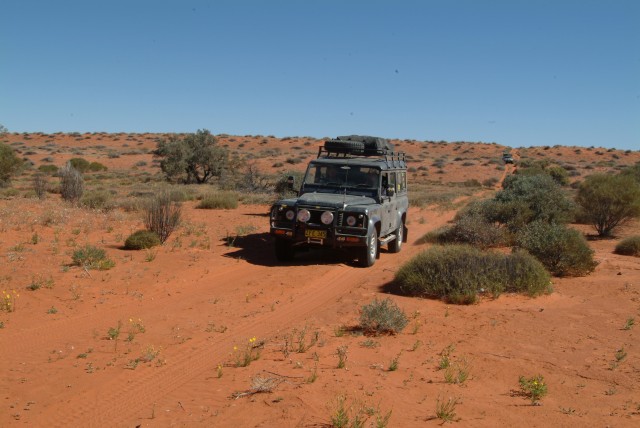 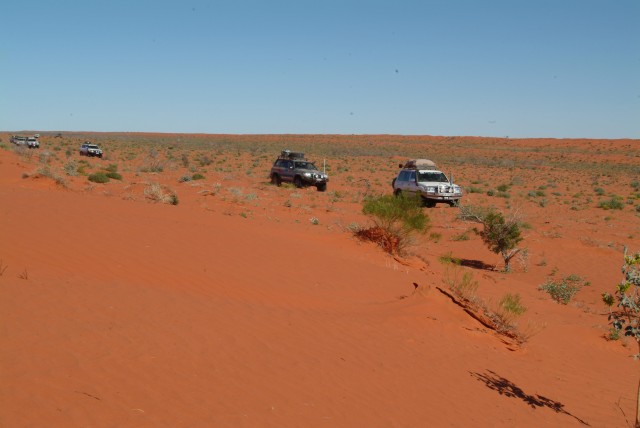 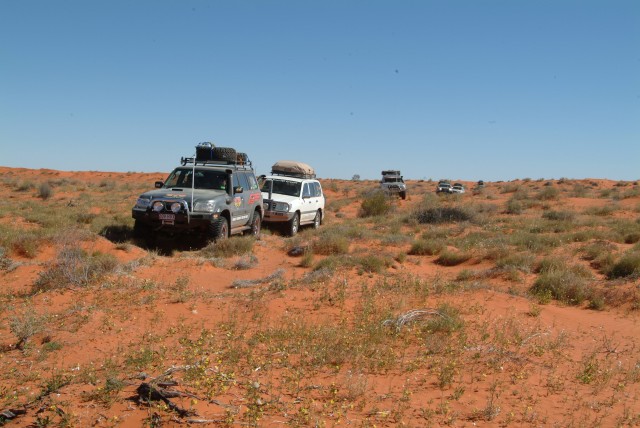 After our river sojourn at Bowthorn, where we had taken to a small tinnie to explore the section of the Nicholson River upstream from Kingfisher Camp, it was back onto the dusty tracks of the Gulf country.

The modern-day route from Kingfisher Camp meets with the main Gulf Track just north of Turn-off Lagoon, which back in the 1880s was on the Port Darwin Track used by the legendary drovers (cowboys) and other travellers of the time. It was here that the original survey party set up a new base depot to attack the border line by following the Nicholson River up stream.

After months of work they finally came out on to less rugged country to the southwest of present day Westmoreland station. A short time later they pegged the 600-mile post (about 7km south of the present day Gulf Road crossing of the NT/Qld border) – it had taken the party nine gruelling months to mark the border from the 517-mile peg. 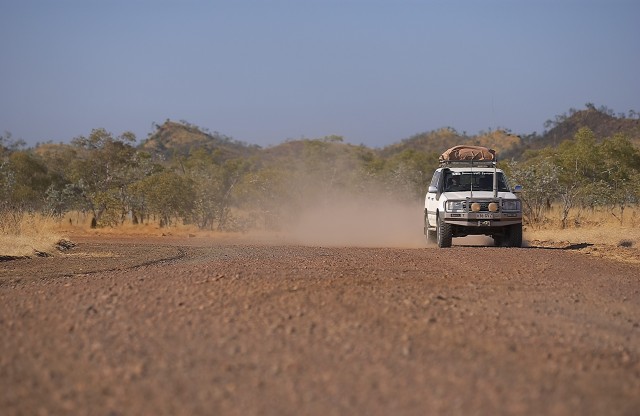 When John Carruthers and Larry Wells arrived here around the 17th August 1886, Wollogorang station, which straddles the Qld/NT border was already in existence – but only just. JW Chisholm, from Goulburn, had taken up the lease over the area two years previously. Still, it wasn’t until 1883 when Henry and Frank Carne arrived with cattle and built a few rough buildings on the edge of what they called, Settlement Creek, that a permanent European outpost was established.

For our trip we stopped at the homestead to see Stuart Zlotkowski, who runs the family owned property and confirm our permission to traverse his land to the coast. With a mud map in hand we left the sprawl of buildings and took the ‘Beach Track’ north to the Gulf. Stuart’s words though were resounding in our ears, “I don’t know if you’ll get through following the border – I’ve never been there by vehicle – the last group that tried gave up after eight punctures!” 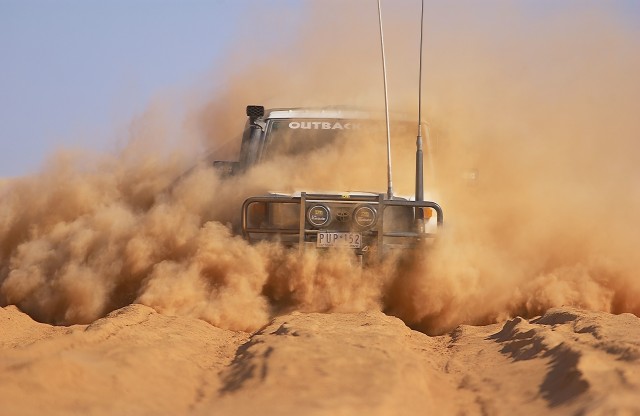 We hoped we were better equipped. As it turned out we were … and luckier!

With instructions from Stuart of, ‘some blazed post’ we found our most impressive find of the trip. The 616-mile post blazed by the original party still stands proud and it is in such good condition that it looks like it was just done yesterday. For some reason, even though the original border party’s brief was to use a prominent post for every 10-mile mark, the 616-mile marker was the most outstanding marker we found.

We followed that find up with a nearby tree blazed by a prominent ‘W’ (for Larry Wells we assumed) and then a series of original mile posts and more blazed trees.

By now the track had became non-existent. Instead, the route north was marked by a level of grass and scrub that was lower than on both sides of what was once the cleared line of the border. The spiky scrub tore relentlessly along the sides of the vehicles and I was expecting the convoy to be called to a halt at any moment with a flat tyre, but such wasn’t the case. 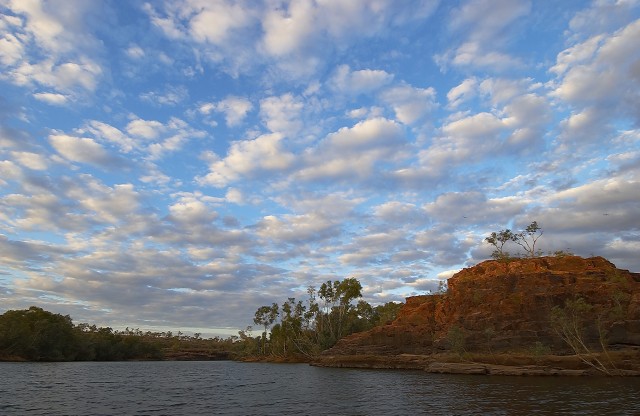 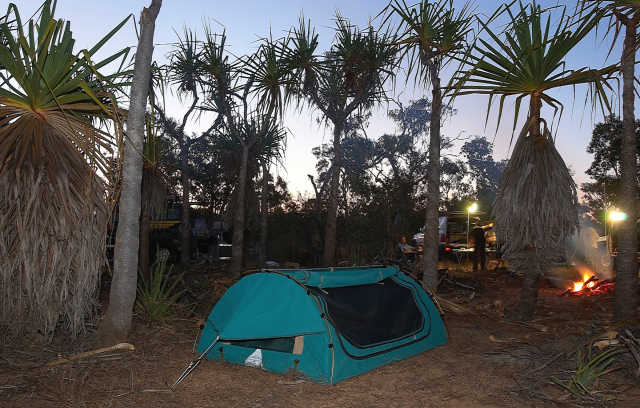 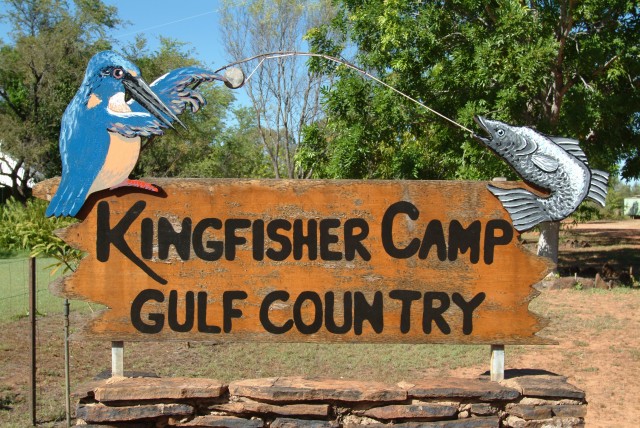 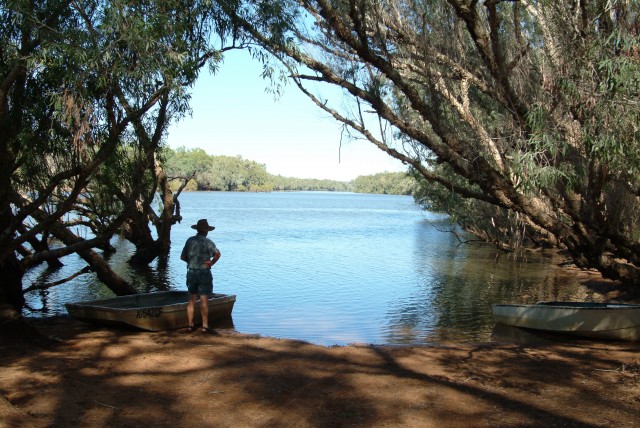 We were soon within eight kilometres of the coast and everyone was looking forward to a beachside camp, but then our luck ran out. A creek or two, then a wide mud flat that floods every Wet season and where three of our vehicles became bogged, followed by a few kilometres of near impenetrable scrub, meant it was to be another 24 hours before we got to the beach. The trail we blazed through this section giving us just an inkling of an idea of what the original surveyors had to contend with.

Then the call we had been waiting for came from our advance foot party, “We’ve found the main border marker just back from the beach!”

The last 100 metres was along a scrub-lined grassy alleyway that led to the marker, now a cement post, the original paperbark post having long decayed. We stopped briefly to take a couple of photos, to read the words ‘651 mile 57 chains’ from Poeppel Corner and the date ‘29.9.1886’, and to congratulate ourselves. 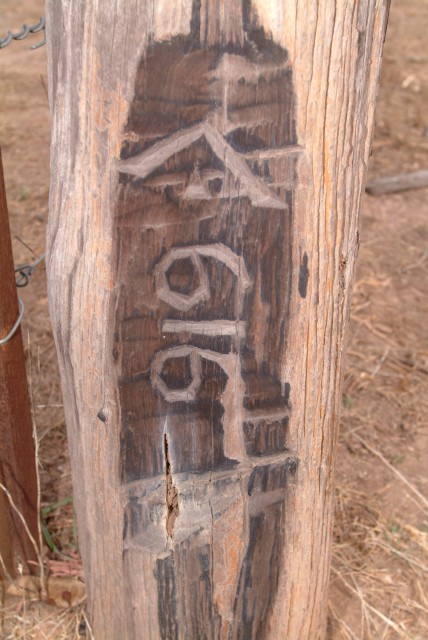 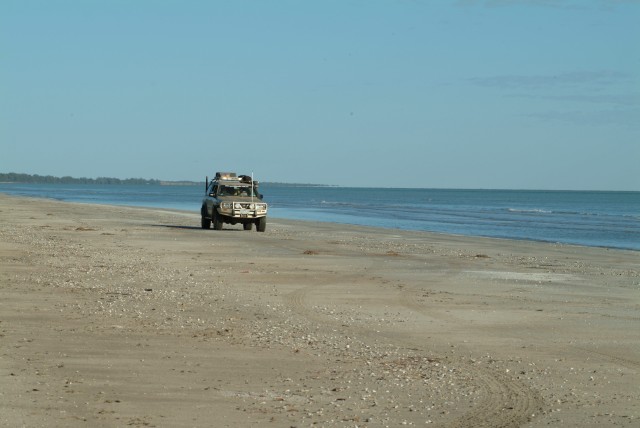 We pushed through the screen of casuarinas onto a wide sandy shore. The feeling of achievement was fantastic, even for our rather paltry effort when compared to the near three years of endeavour of the original survey party and what they must have felt.

Only Larry Wells and one other worker saw both the start and the finish of that historic endeavour to mark the 651 mile (1049km) length of the NT and Qld borders. A rather fit 23 year old Wells weighed 83kg at the start of the trip, but at the end, in testimony to the rigours he endured and somehow survived, he was down to a thin, but wiry 68kg.

After a brief ceremony to mark the completion of the line, the party left next day to retrace their steps back to the station on Settlement Creek. We did much the same! 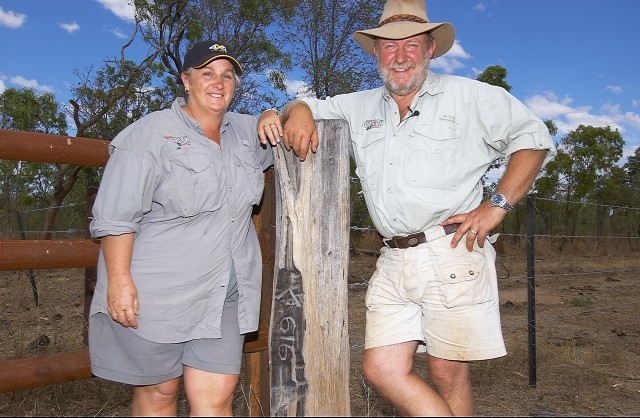 Access across many of the properties that this trip traversed is rarely given while a trip of this magnitude demands a lot of planning and prepartion as well as properly prepared vehicles. A permit to cross the Traditional Lands of the Aboriginal people in the northern Simpson Desert is available through: http://www.direct4wd.com.au.

The closest facilities to Peoppel Corner are located at Birdsville in south-west Queensland. This small town of 190 people is the major resupply point for travellers tackling the Simpson Desert crossings.

The small community of Burketown on the Gulf and Hells Gate Roadhouse, further west are the main supply point for people travelling the Gulf Road. 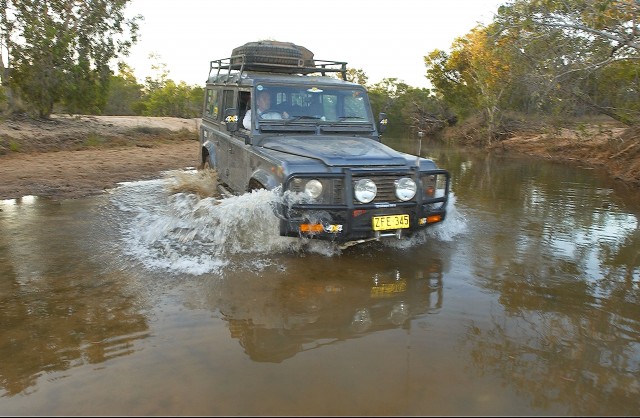