The anticipation is finally over as Toyota unveils the all-new 300-Series Land Cruiser at a premiere in Dubai. This will be the first new Land Cruiser SW (station wagon) model since the release of the 200 in 2007 and will take its place as the new flagship in the SUV range. 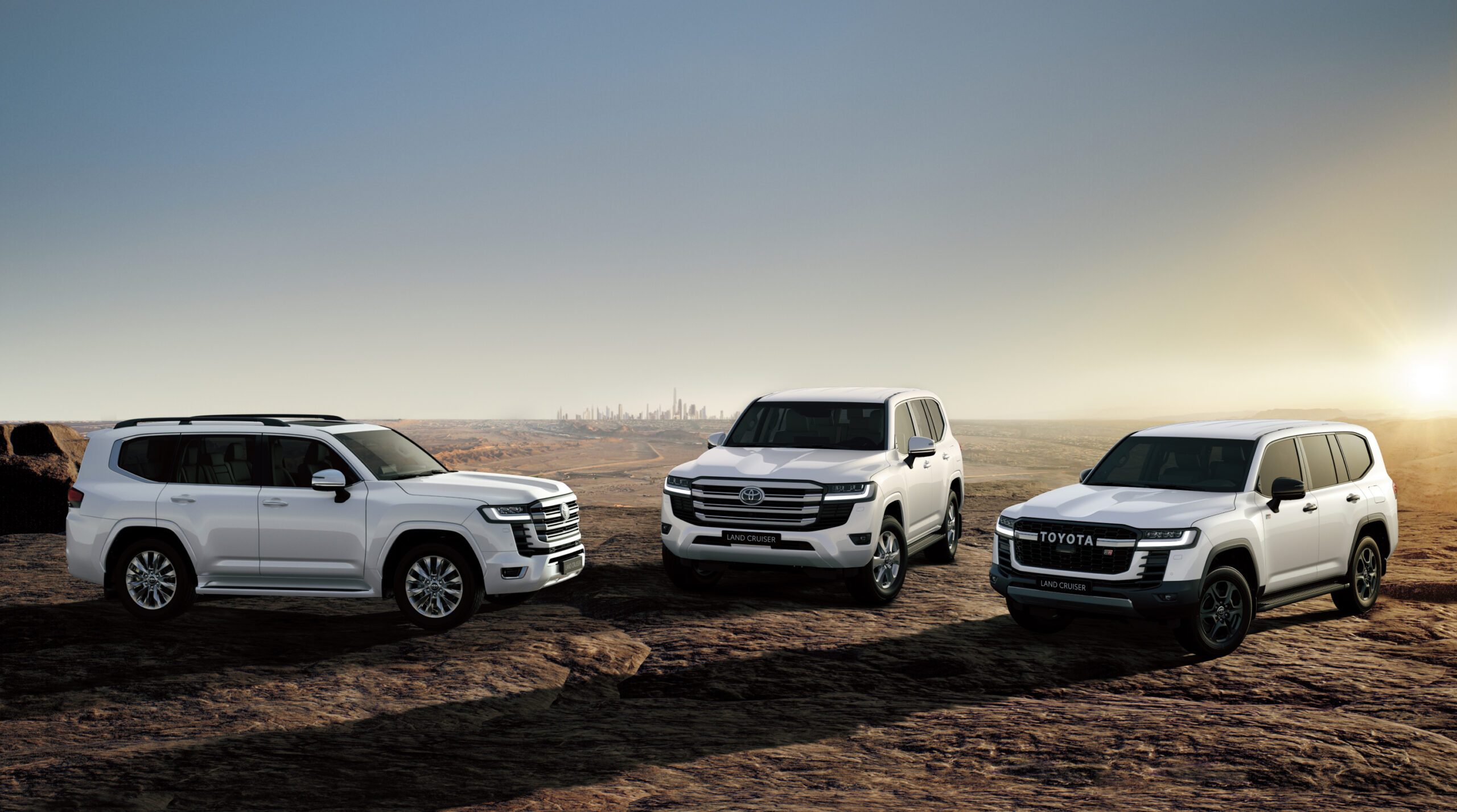 Since its launch in 1951, the Land Cruiser has continued to be a vehicle synonymous with dependable reliability, and more than ten million units have been sold over the past 70 years. In this 70th-anniversary year of the Land Cruiser, Toyota has completely redesigned its character by “merging technologies accumulated over many years with the latest technologies.” Toyota states that their two primary objectives for the 300 series were: 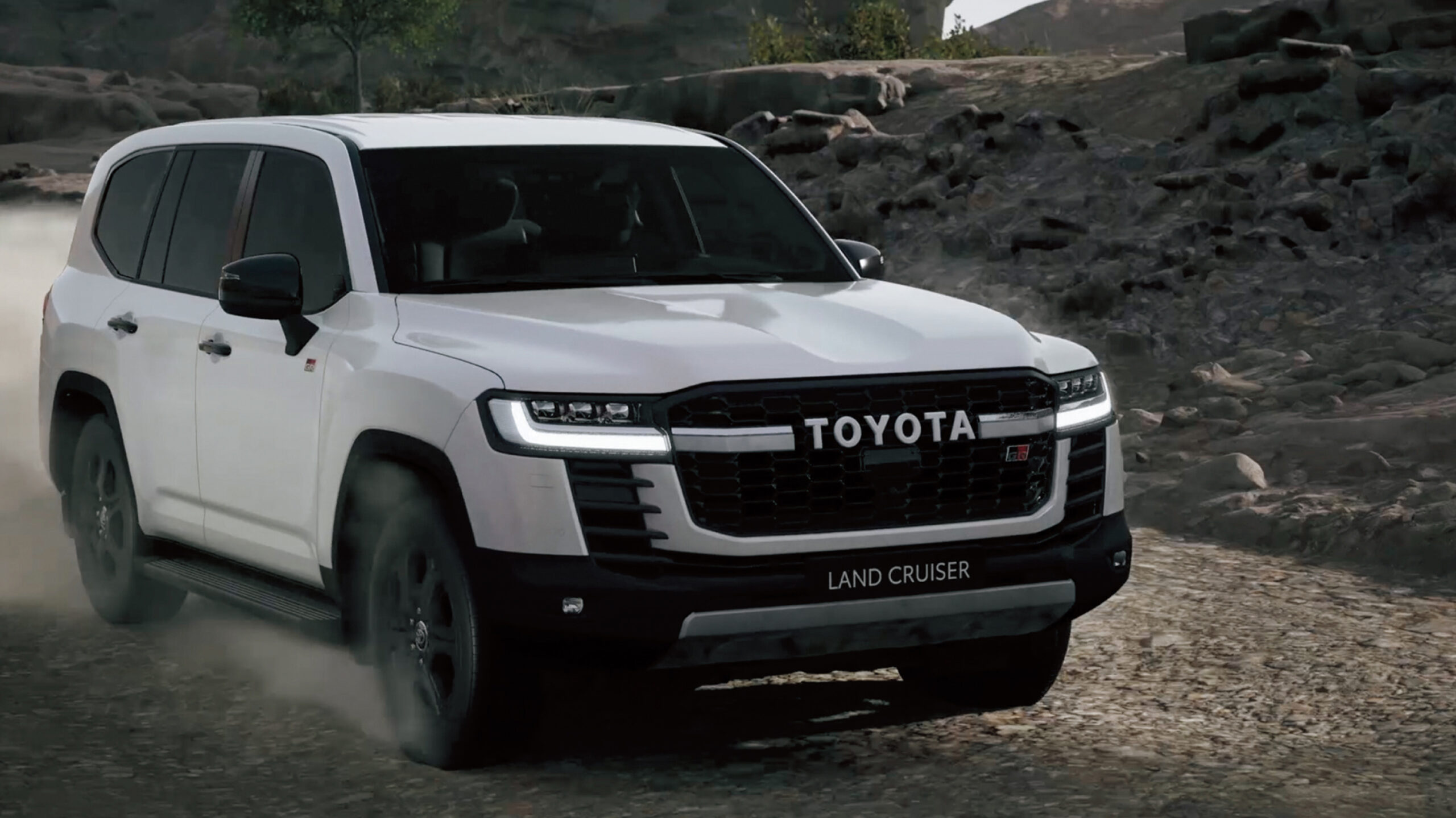 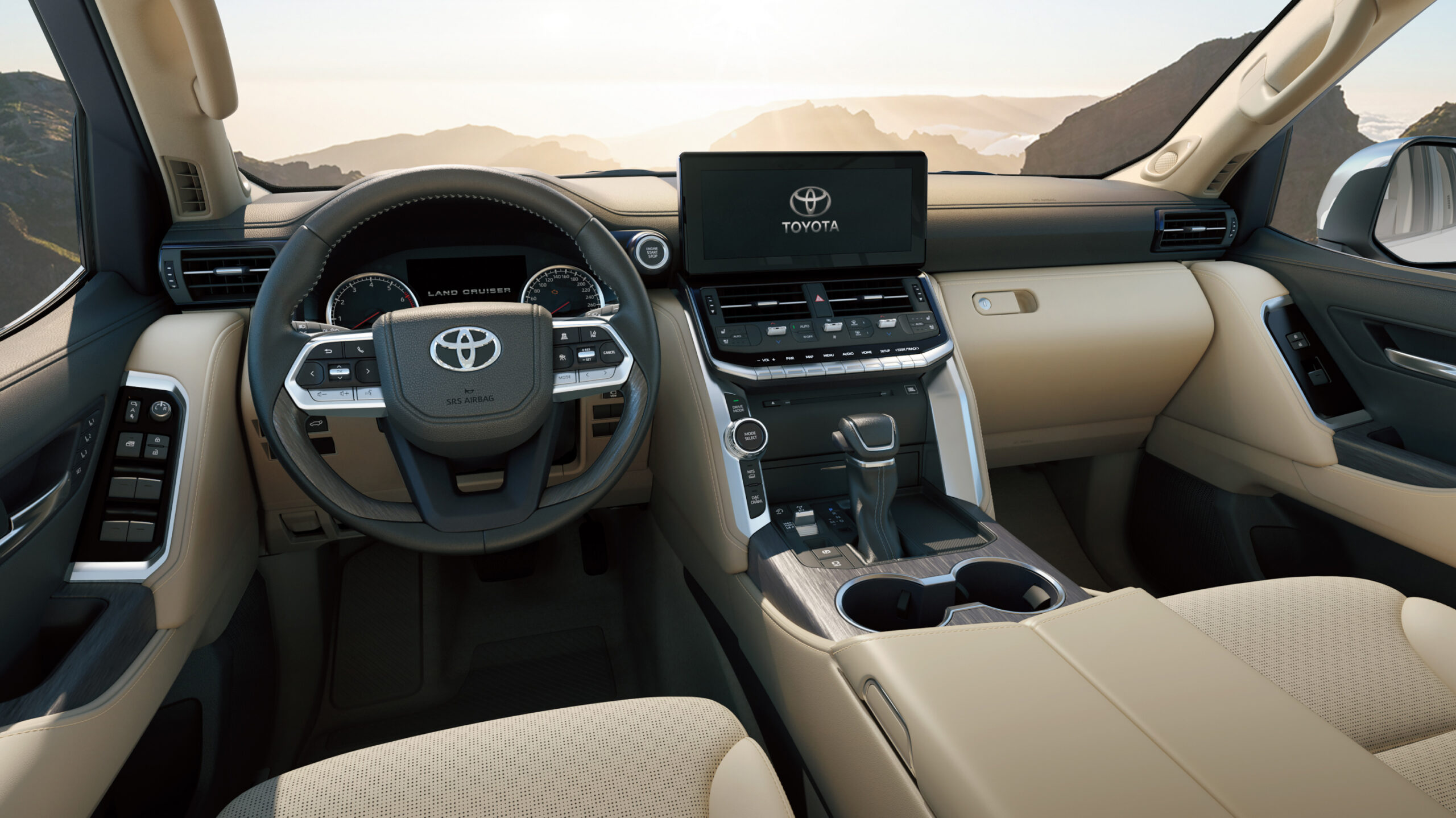 The engines, transmission, and platform are all brand new and showcase an “unprecedented” leap forwards in performance both on-road and in the “toughest” off-road environments. The 300 Series incorporates “world-first” technologies whilst promising not to compromise its reputation for bombproof reliability, with Toyota stating the Land Cruiser will “go anywhere and everywhere, and bring you back safe and well.”

Toyota has made use of a new TNGA (Toyota New Global Architecture) platform, the first to be designed for a body-on-frame vehicle. The GA-F platform provides “exceptional off-road capability while bringing new benefits in terms of body rigidity, strength, and dynamic balance.” So, what does this all mean? Well, it provides the basis to introduce new technology, reduce weight, lower the vehicle’s centre of gravity, improve safety, allowing for new designs for the exterior and interior. The 300 Series is a whopping 441 pounds (200 kilograms) lighter than its predecessor, and that will undoubtedly improve handling both on and off the road. 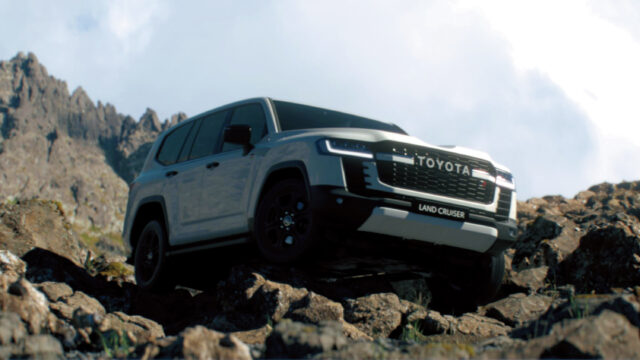 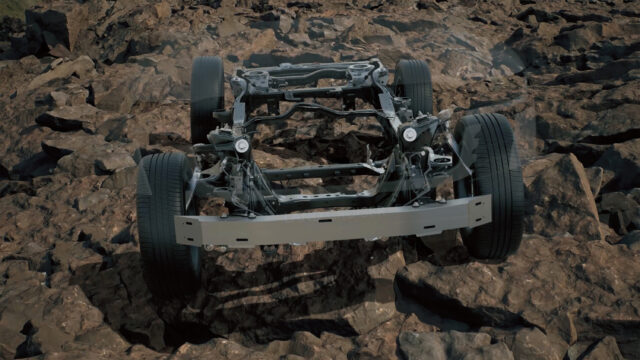 The all-new suspension system was developed with the help of Dakar rally drivers and engineered to be highly capable but also easy to control whatever the terrain. One key focus was to improve wheel articulation whilst introducing a world-first Electronic Kinetic Dynamic Suspension system that improves road-holding. Additionally, the 300 is the first Toyota to adopt a Multi-terrain monitor, which gives the driver a real-time view of the road surface beneath and immediately surrounding the vehicle and the position of the wheels. A Multi-terrain Select system automatically judges the quality of the driving surface and adopts the best-suited driving mode. The new model will preserve the dimensions of the current SW generation, including overall length and width, the wheelbase, and the departure and approach angles. 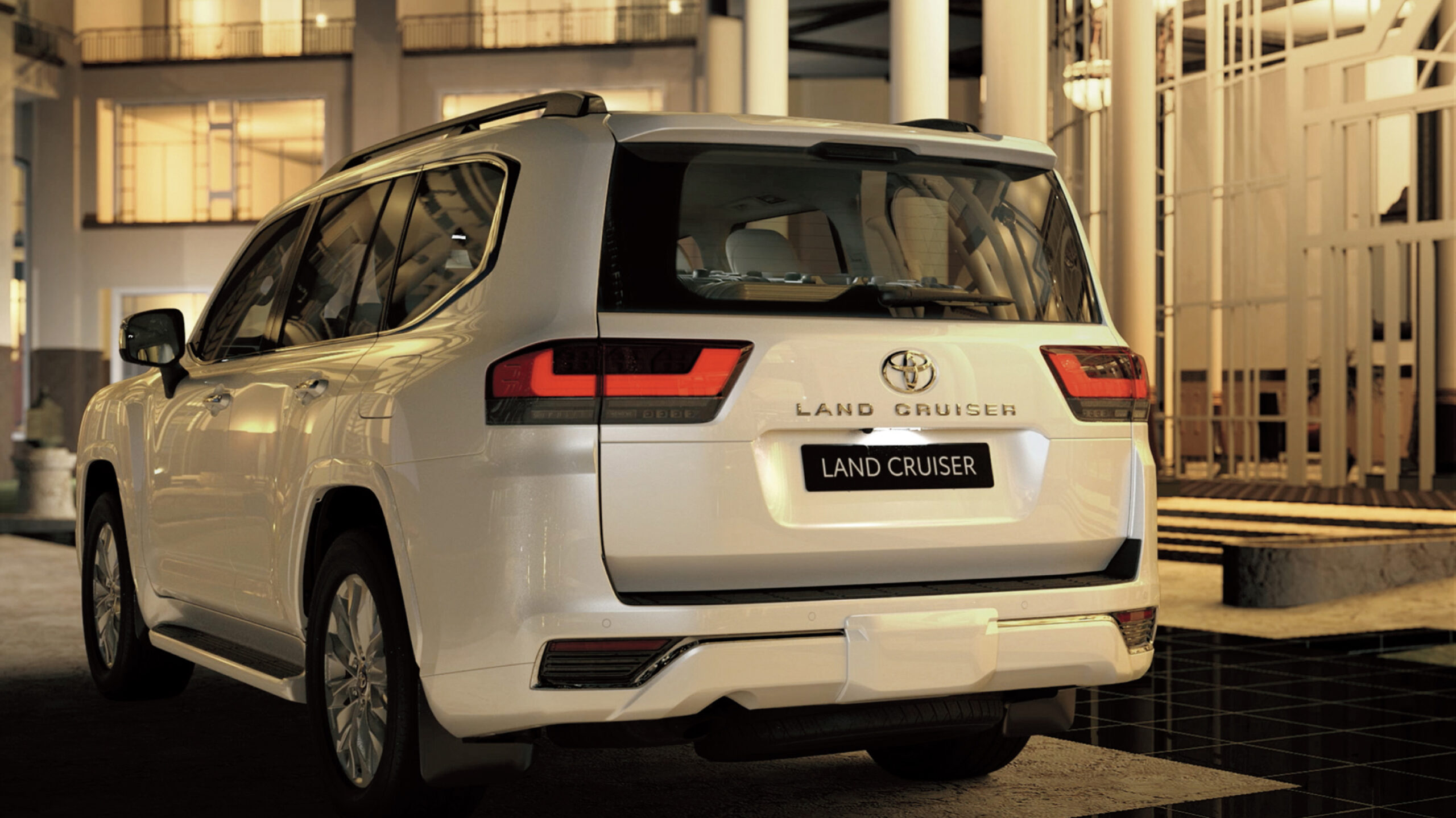 The advancements in engineering are matched by a new design “that is faithful to the model’s heritage and status.” The new appearance certainly continues the boxy dimensions associated with the Land Cruiser, and though I’m not totally in love with the new look, I accept that they’ve done a good job within the latest safety and emission laws. Inside, the cabin, much like the new Defender, offers a premium upmarket finish. There are significant advances in safety, from the inherent robustness of the vehicle’s construction and its sophisticated systems for secure driving to additional and upgraded safety and driver assistance systems (provided by the second generation of Toyota Safety Sense). The ability of the Pre-Collision system has been enhanced, so it’s now able to detect pedestrians (daytime and nighttime) and cyclists (daytime). At junctions, it can recognise potential collision hazards with both oncoming traffic and pedestrians crossing the road into which the vehicle is heading. A new parking support brake identifies obstacles in front and behind the car when moving slowly in a car park and when approaching vehicles and pedestrians while reversing out of a parking space. 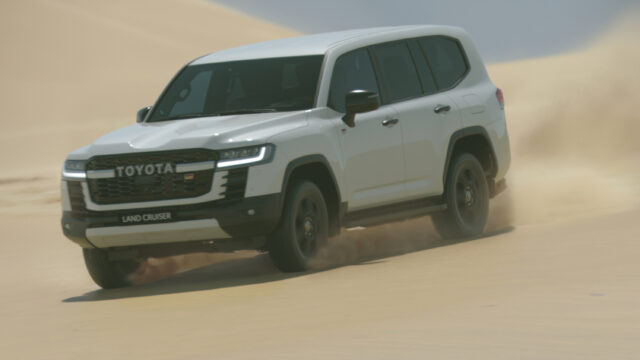 It’s clear with the 300 Series that Toyota wanted to create a vehicle that showcased the very latest in SUV technology without compromising the Land Cruiser’s existing notoriety for dependability. As someone living full-time in a 36-year-old 4WD camper, I shudder reading about all the complicated electrical systems featured in vehicles like the Land Cruiser. That said, with over 14 years of meticulous research and development, it’s evident Toyota has taken the time to test these systems thoroughly. Will the 300 Series live up to the Land Cruiser badge? Time will tell, but on paper, it looks very promising. The new model will be launched this summer.