There has been a long-running debate over the question of which is better, the free-and-easy automatic transmission or the venerable manual gearbox. Though I’ve spent plenty of time in vehicles with a slushbox between the mill and rear wheels, I will disclose upfront that I prefer manual cogs. This is not to say that the automatic does not present benefits. Many admirers of the automatic cherish the idea of not having to think about which gear they should be in, when to shift, or managing the clutch. However, these attributes are in my opinion, vastly outweighed by good old manually selected gears. Here we go…

For the pure joy of driving the crown goes the manual transmission. Need I say more?

This one goes to the manual hands-down. The reason automatics are called so, is because they replace a human-operated clutch with a torque converter, internal bands, and friction plates (clutches). Shift points are determined by hydraulic, vacuum, and/or electronic means, and all the driver has to do is, well, nothing (reread Fun Factor). This is what allows an automatic to stay running while still in gear at a stoplight. The problem is that torque converters are designed to slip, and slippage generates heat, which can be the death knelll of the automatic transmission. I’ve been on the trail many times when someone with a slushbox had his or her transmission boil over. In extremely cold climates the fluid thickens, components contract, and tolerances loosen up. None of this is good for a piece of machinery that relies on hydraulic pressure. On exceptionally cold days it is a good idea to run the engine for a period of time long enough for its latent energy warm up the transmission. 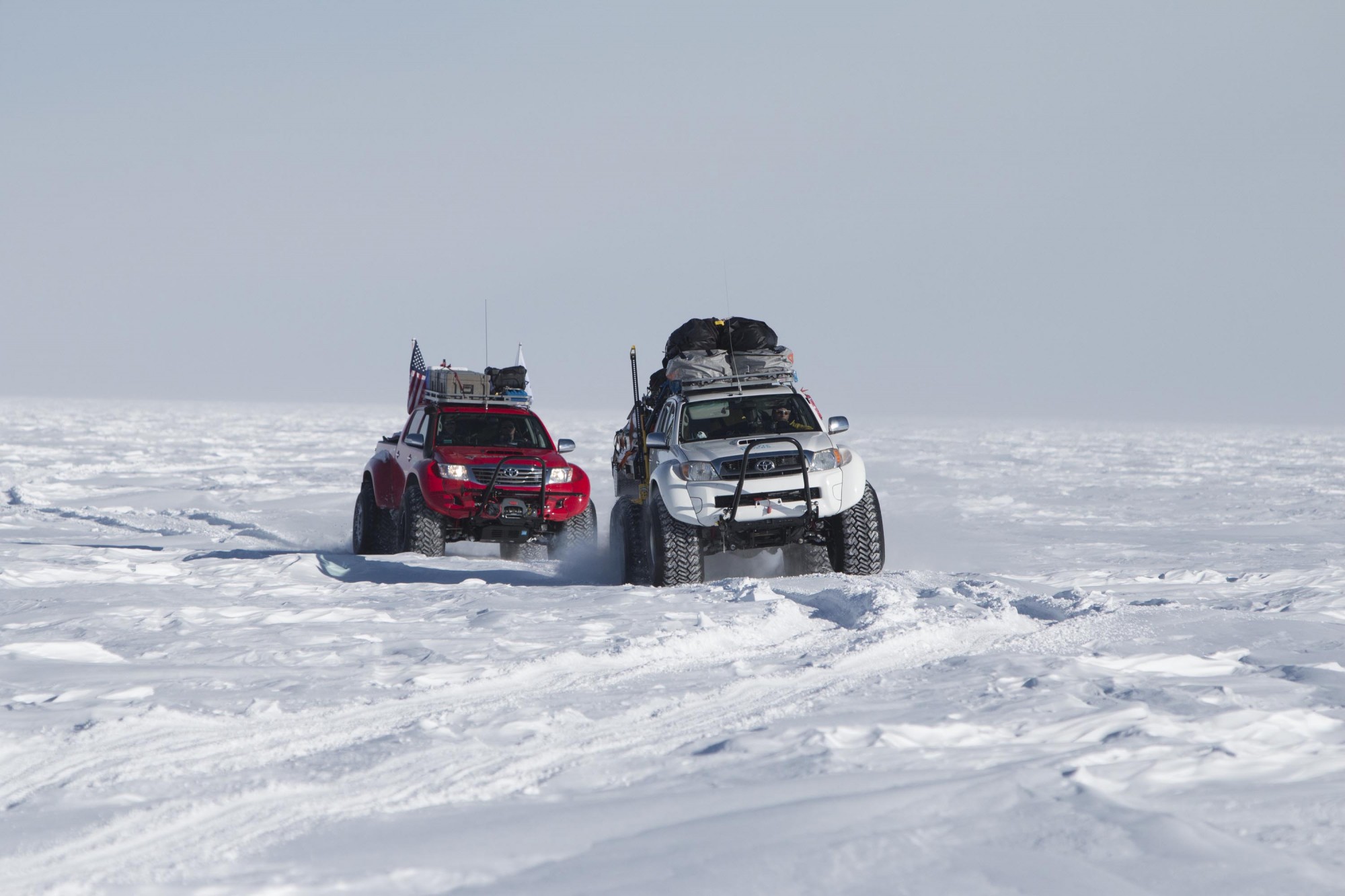 Again, the manual gearbox has this one in the bag, no questions. Although water in any transmission can be detrimental if not addressed immediately, if an automatic takes in water while fording a river or creek, it’s most likely toast. The lining of the friction clutches will absorb water and basically disintegrate if you keep driving it. I suggest turning off the motor immediately and getting towed to spot where you can flush the system. This can be done by draining the transmission, disconnecting the hydraulic return line (inflow from the transmission cooler) and placing in a container of fresh tranny fluid. Place the other end of the line (attach a hose to output of the tranny cooler) in an empty bucket and restart the motor. Cycle the transmission through the gears (while parked) until the outflow is clear of water or contaminant. This might, and I repeat might, save your transmission. If possible, it should still be towed to a shop for proper inspection. A manual, on the other hand, will still function if filled with water (if temporarily). Other than the need to flush it thoroughly in the near future, it will get you off the trail. 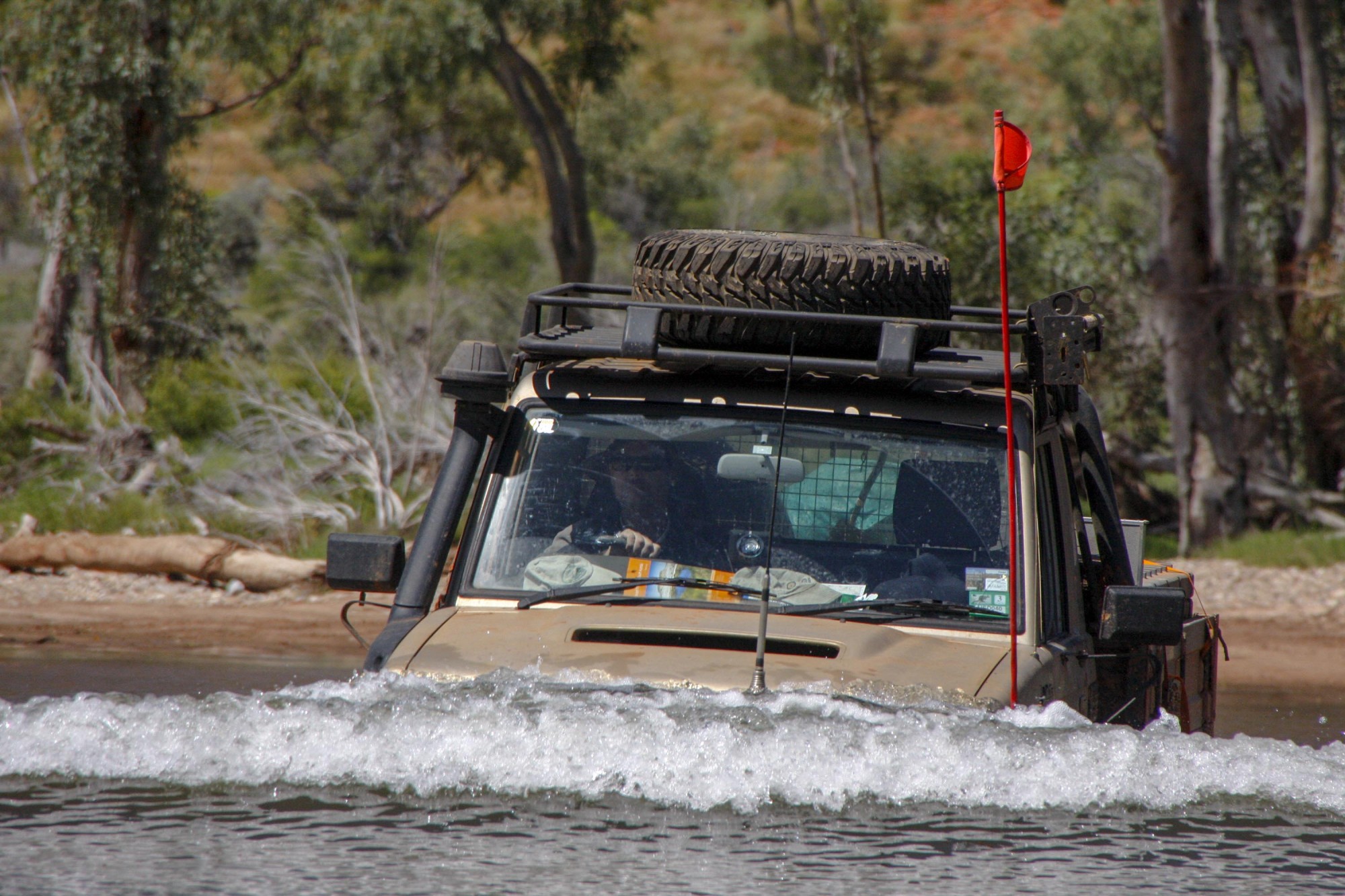 Again, the manual takes this one with ease. Anyone with an automatic whom has experienced the “click” associated with a dead battery will attest to this. A manual transmission is perfectly content being pushed, pulled, or coasted down a hill and “bump started.” An automatic, not so much.

This one goes to the automatic. With all things being equal, an automatic usually as a taller final drive ratio (lower RPM at highway speeds) and will demand a few less greenbacks at the pump. Newer vehicles, some of which are equipped with 8- or 9-speed transmissions, have stretched this advantage even further.

Aside from vehicles equipped with electronic features such as hill decent control and tow/haul modes, an automatic can cause you serious grief while descending steep grades. Hauling a heavy load or towing a trailer will compound the problem. For example, the road to the astronomical observatory in the San Pedro Martir in Baja, Mexico, rises from near sea level to 9,000 feet over the span of 40 miles, the majority of elevation gain being in the last 10 miles. Descending this grade with a non-tow/haul equipped automatic will most likely melt your brakes and have you reciting the Hale Mary before you reach the midpoint. With a manual you can select a low gear and let the engine’s compression do most of the work. Yes, this can be done to an extent with an automatic, but with much less efficiency. 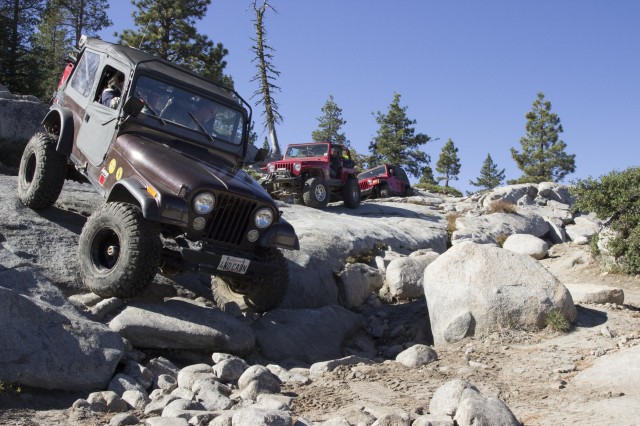 The automatic has some defined advantages in technical terrain…unless you are going down hill. Because it will slip indefinitely, an automatic allows you to surmount obstacles at literally a snail’s pace. However, most automatics have relatively tall gearing (higher low-range gear ratios), which causes slippage and the associated heat generation (reread Thermal Management). Over an extended period of time this can become an issue. A stick (though not as graceful at times), via careful use of the clutch and gentle inputs to the accelerator, will force you to master your technical terrain driving skills…or smoke the clutch.

In steep descents (or on the backside of an obstacle you just cleared) a manual, which allows the driver to use compression braking, wins nearly every time. The reason is that with an automatic, the engine is continuing to “push” the vehicle; thus relying completely on the brakes to manage speed. The exception to this would be a late-model vehicle equipped with an automatic and hill descent control. 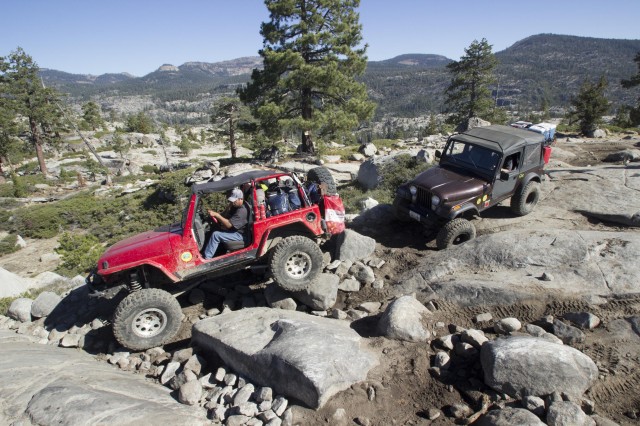 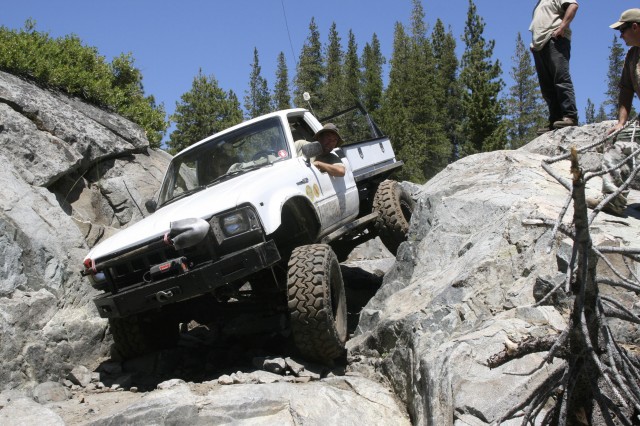 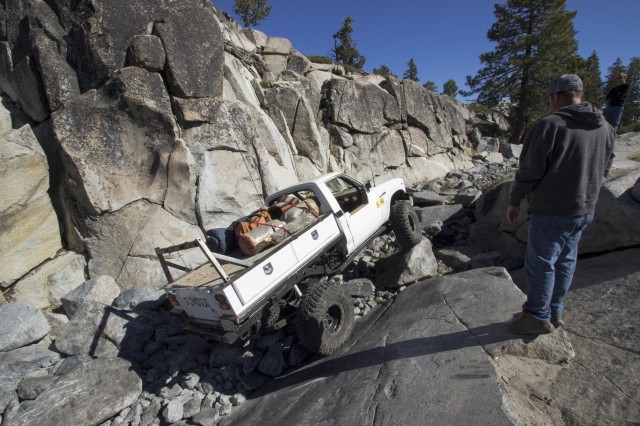 In deep, soft snow, sand, or mud, where more is not always better, the automatic has some defined advantages. The principal is its ability to apply force to the drive axles/tires in infinitely small doses. In many cases this allows the tire’s tread blocks and sipping to gain purchase; where the more direct and immediate input caused by releasing a clutch will cause the tires to dig down rather than produce forward movement. Another plus for the automatic is quicker and smoother shifts once the vehicle is in motion, which reduced the possibility of the tires digging a trench to China. The negative aspect of an automatic in these conditions is when you need to “rock” the vehicle fore and aft in quick succession to “bounce” out of a quagmire. It has been my experience that a manual is much more suited for this task. 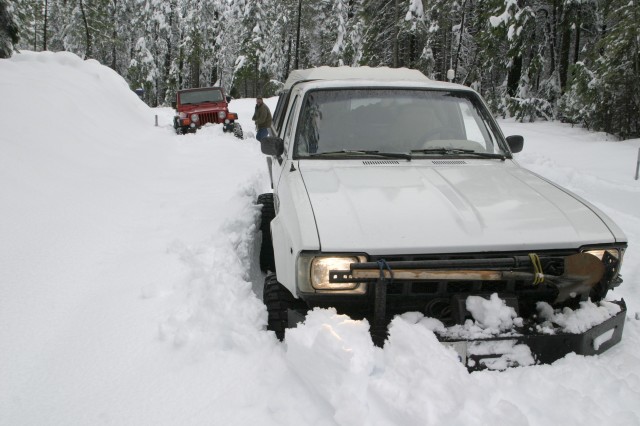 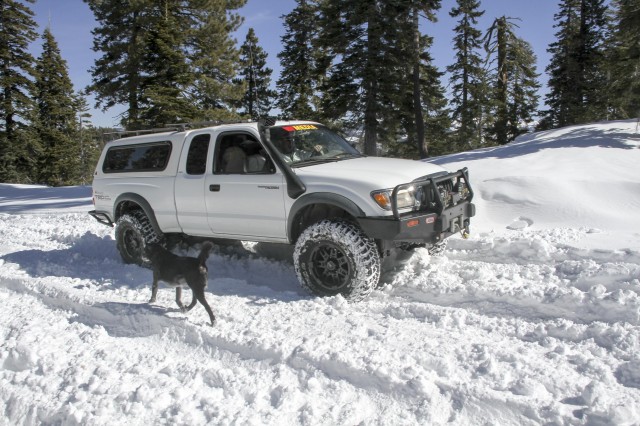 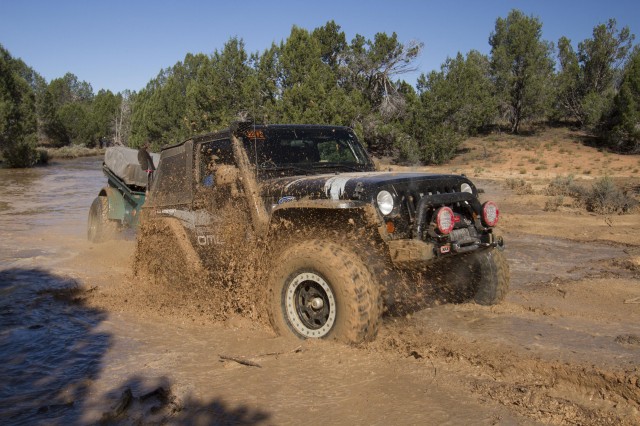 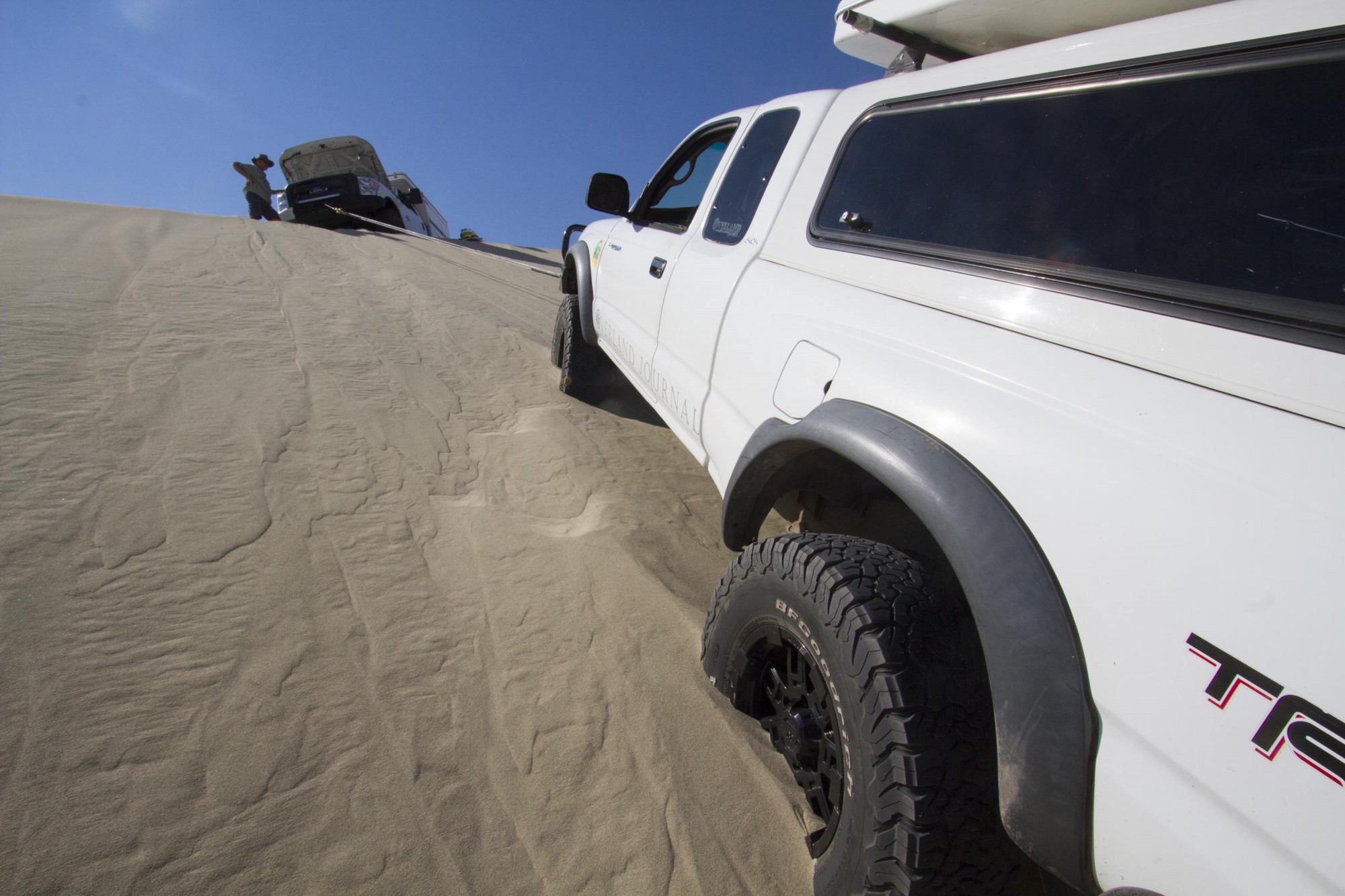 I wouldn’t consider myself a great mechanic, but if I had my druthers I’d rather be tasked with dismantling a manual transmission over an automatic. I’ve had the 5-speed (as well as the transfercase) in my `82 Hilux apart, and short of needing a press and a few specialty tools for certain components, manuals consist of nuts, bolts, shift forks, detents, bearings, and gears. Also, you can find shop capable of a makeshift repair on a manual just about anywhere in the world. They probably won’t have what we might consider “proper” tools, but they will figure it out. 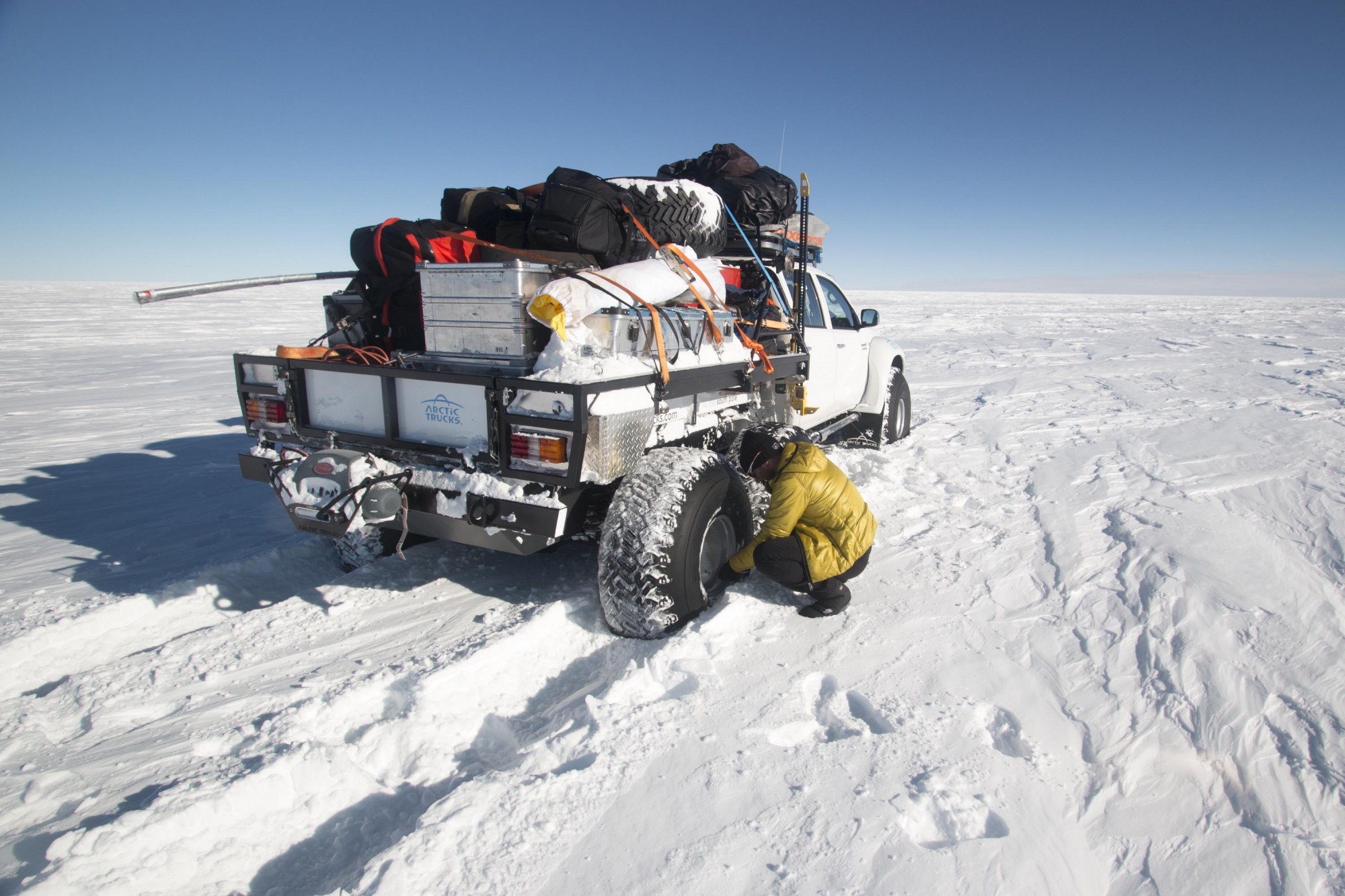 Taking the human element out of the shifting and gear-selection process is arguably better for the transmission and everything attached to it. Stabbing the accelerator and dropping the clutch when one is ticked off at their boss, red light, or soon-to-be ex-spouse is rough on everything from the pilot bearing to the axle seals. Then there is the grind-a-pound missed shift, which results in fine (or not so fine) metal shavings drifting around with the transmission fluid through bearings and other machined surfaces. Unless you are running a high-stall torque converter, the drivetrain preservation nod goes to the slushbox (note, this is why most race vehicles sport automatic transmissions).

This is where the slushbox shines. Sammy Hagar sums it up in his I Can’t Drive 55 lyrics, “One foot on the brake, and one on the gas.” Short of the aforementioned heat dissipation issue, an automatic will allow you to dive into and push through corners faster and with more control. The theory behind this is left-foot braking. Rather than lifting from the throttle and dropping a gear when entering a corner, an automatic allows you to brake with your left foot while delicately applying pressure to the skinny pedal (throttle). The result is the ability to brake later, accelerate earlier, and reduce the chance of jerky clutch inputs causing the tires to break loose. Having said all this, the manual is still more fun to drive.

As for driving around town in traffic, sure, I’ll give this one to the automatic…but who wants to drive in the city.

Overlanders' Handbook: Worldwide Route And Planning Gu...
by Chris Scott
From $22.13From CAD$24.15 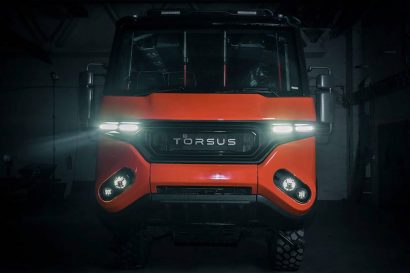 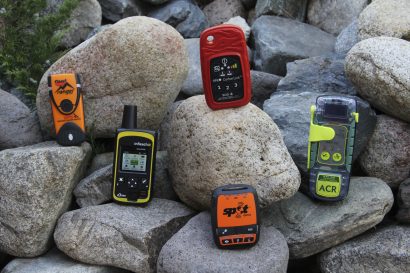 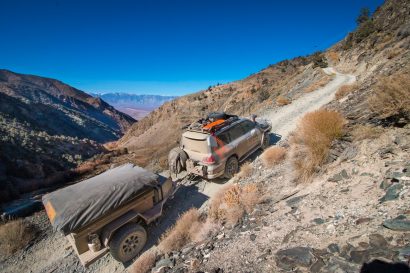