Julia Albu was baking brownies when she decided, spur-of-the-moment, to drive her 1997 Toyota Conquest to London. Measuring ingredients and mixing chocolatey batter in her Jakkalsfontein, South Africa, kitchen, a radio program announced the expenditure of 8 million dollars on cars for President Jacob Zuma’s wives. Outraged, Julia picked up the telephone and dialed the radio show Afternoon Drive, speaking pointedly to host John Maytham. “Listening to your program now about all these motorcars, I just felt I had to ring you because I plan to drive my little car—which, next year will be 20 years that I’ve had it, and I will be 80 next year—I plan to drive it to London.”

After a good little chat with John, Julia hung up the phone. Oh my god, she thought. I hope no one heard that stupid announcement I just made. The reality was that she had never even considered the trip before. She didn’t know how far it was or what countries were en route. “Once I’d verbalised it, though, the idea seemed to take on a life of its own,” she wrote on her blog, which eventually formed the book My African Conquest: Cape to Cairo at 80. After roughly a year of preparation, with countless chocolate biscuits and thousands of Bic pens in tow, Albu left at 5:00 a.m. on June 13, 2017, the morning of her 80th birthday. 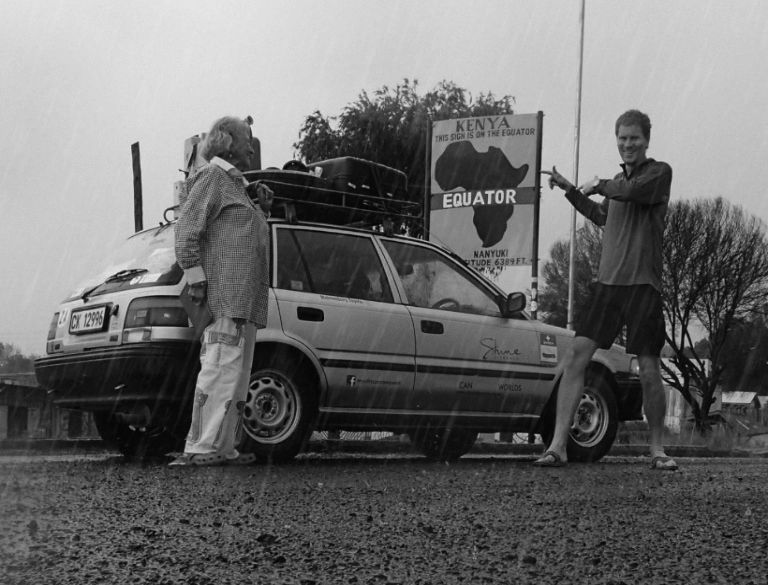 Although Julia’s Toyota Conquest, “Tracy,” was a capable (albeit underrated) platform for the journey, the car had 330,000 kilometers on the odometer and required a bit of a refresh before departure. The saggy headliner, worn door panels, “ghastly” seat covers, and visors were replaced with a bold jungle-print fabric featuring large palms and ferns. With the help of her son-in-law, Joost, the car was fitted with larger wheels and tires, a lift, a roof rack, spare petrol tank, and a water purifying container. Albu tackled paperwork and logistics, securing carnets, tourist visas, and intel on the Great North Road route, which was made into a full-length personalized map by Map Studio in South Africa. After two years of planning, she was ready to go. “When I’d finally been inoculated against practically every known virus—although the doctor said he didn’t think I’d need one for sexually transmitted diseases, which I thought was a bit insulating—my bank balance was a hell of a lot lighter,” she wrote.

Accompanied by her youngest daughter, Zambi (“the bravest—and the bossiest”), Albu left in style, surrounded by a convoy of roaring Harley Davidson riders in Pretoria. Like many about to embark on a journey into the unknown, she had doubts. “As we battled our way through the city in the downpour, my tears and the rain beating on the windscreen obscured my view … I was miserable.” Fortunately, the snowclad peaks of Cape Town’s Hex River Mountains pulled Julia out of her funk, and she settled in for the long haul. Her first carnet and passport stamps were at the Kopfontein border into Botswana. 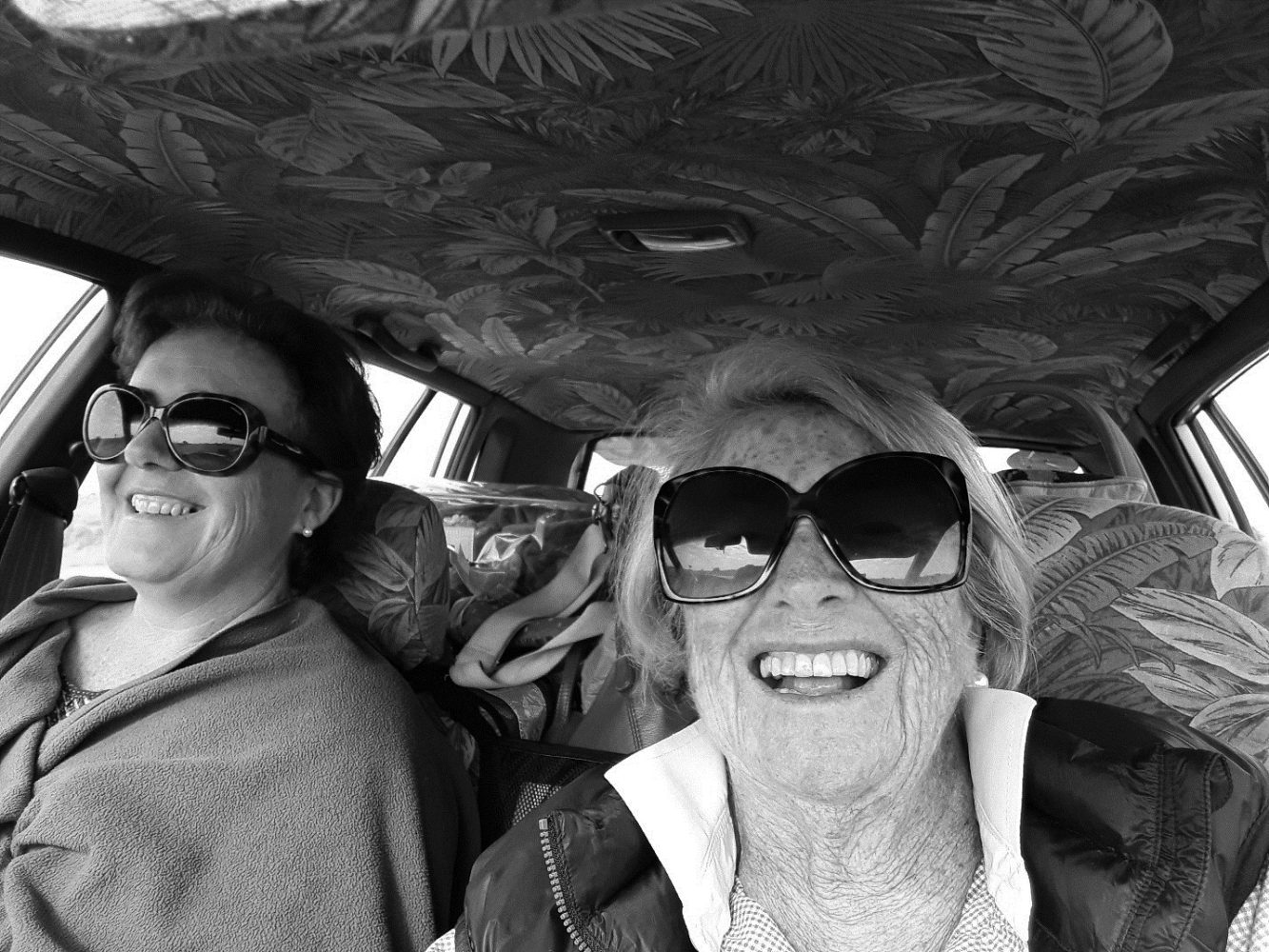 The journey from Botswana to Kenya was filled with potholes, elephants, glowing sunsets, and the overwhelming magnitude of Victoria Falls. Julia’s son Giles, who had previous overland experience through parts of Africa, joined her in Zambia; the two mixed like oil and water as their travel pace, patience, and expectations of the trip clashed. She made friends in Dar es Salaam, Tanzania, delighted in the sweet smells and cooling juice of fresh litchis, pineapples, and grapefruits on side streets, and swooned over the wafts of the spice market: cardamom, ginger, cinnamon, and curry. In Nairobi, Tracy received a new alternator and lost her front left wheel at the perfect time. “I was going like a Boeing, but as we drove, we detected a slight bumping noise coming from somewhere in Tracy’s innards,” she wrote. “Like a mirage, a Total garage appeared out of the gloom. As we gently eased off the potholed tar, wham! Off came the left wheel!”

Julia seemed to make friends everywhere she went, but the overlanders were “very special people, genuinely interested in us and our stories, and I was in theirs.” She remarked on the “close and caring” community and met up with many other overland travelers during her journey. Albu’s friendly enthusiasm is evident in her writing, so it’s no surprise people surrounded her along the way. She had organized travel companions to accompany her during the drive, sharing responsibilities and keeping her company. “Life is so busy and we don’t take the time to really get to know our families and friends,” she wrote. “Tracy’s two-seater sofa became that safe place to let off steam, cry and (mostly) laugh with utter joy.” From friends to guides, strangers, and family members, there was always someone to chat with. Perhaps her most intriguing road companion was a Rastafarian guide named Lucky, who smelled of dagga and would, without warning, stop the car to do push-ups in the street. 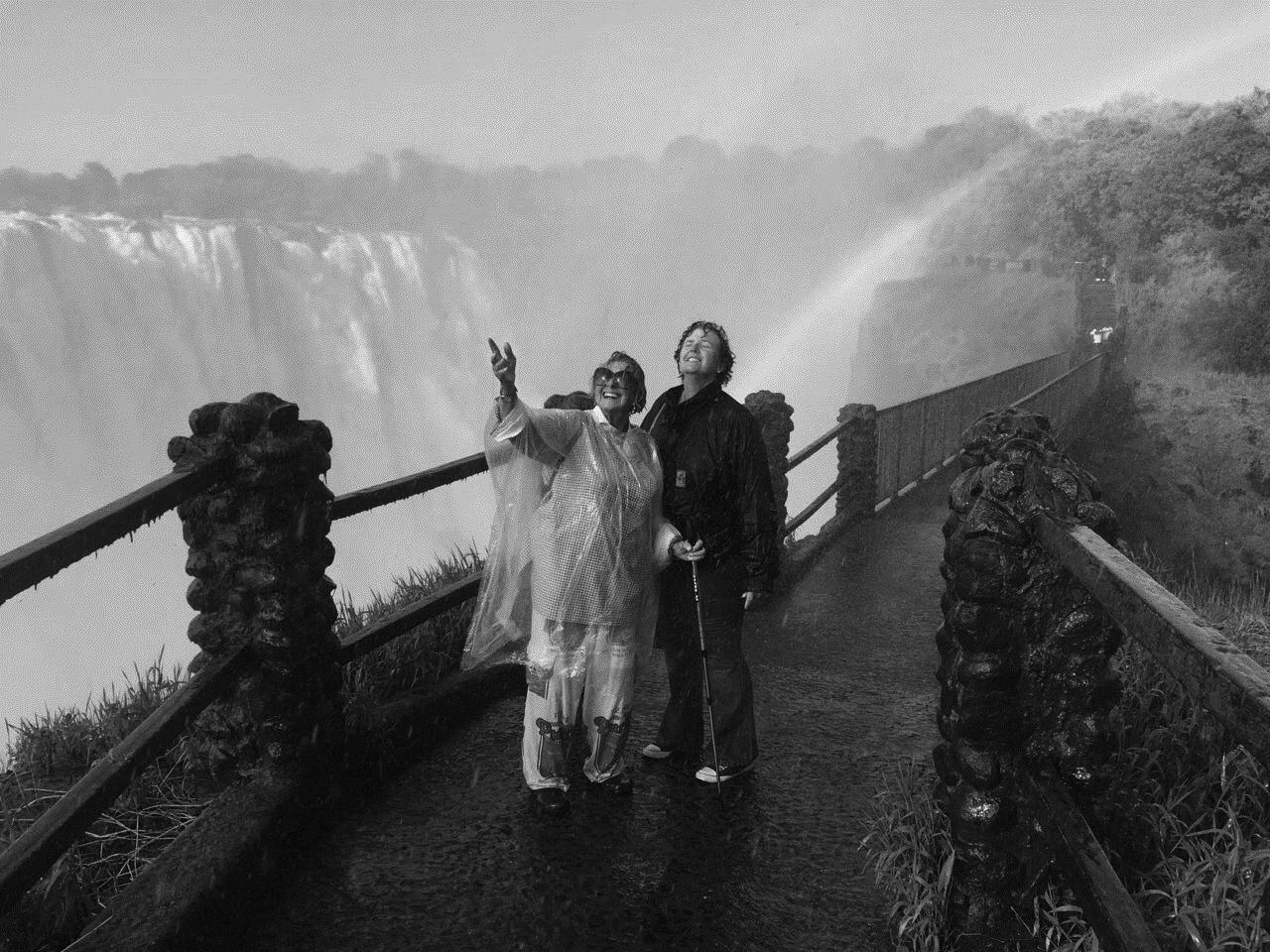 In Uganda, the idea of continuing to London to meet the royals seemingly came out of nowhere. Amid a border crossing, Julia was bantering with an official who asked where she was going. “To London,” she replied, “to have tea with the queen.” Eventually, she did arrive in London, but not before she was surprised by Sudanese officials during an attempted border crossing into Egypt. Tracy, it seemed, had no carnet. She and Joost spent Boxing Day in the customs cafeteria, setting up her stretcher bed, complete with her mother’s linen sheets, a down pillow, and a hot water bottle, the smell of old cooking oil distracting her from sleep. They weren’t alone—the shop owners and their families slept on benches underneath large Pepsi signs, with blankets pulled over their heads.

Julia met fellow travelers from Holland and Cape Town, read Vanity Fair, caught up with family on WhatsApp, and enjoyed a brandy-laced Christmas pudding brought by Joost during their days at the border post. Tourist visas allowed them to explore Egypt, where they visited the temple of Ramses II on New Year’s Eve, enjoying a light show under the moon’s glare. Carnet secured, and the two took off for Luxor, the Valley of the Kings and Queens, and the Great Pyramid of Giza. Alexandria, located on the shore of the Mediterranean, marked the end of the road on the African continent. 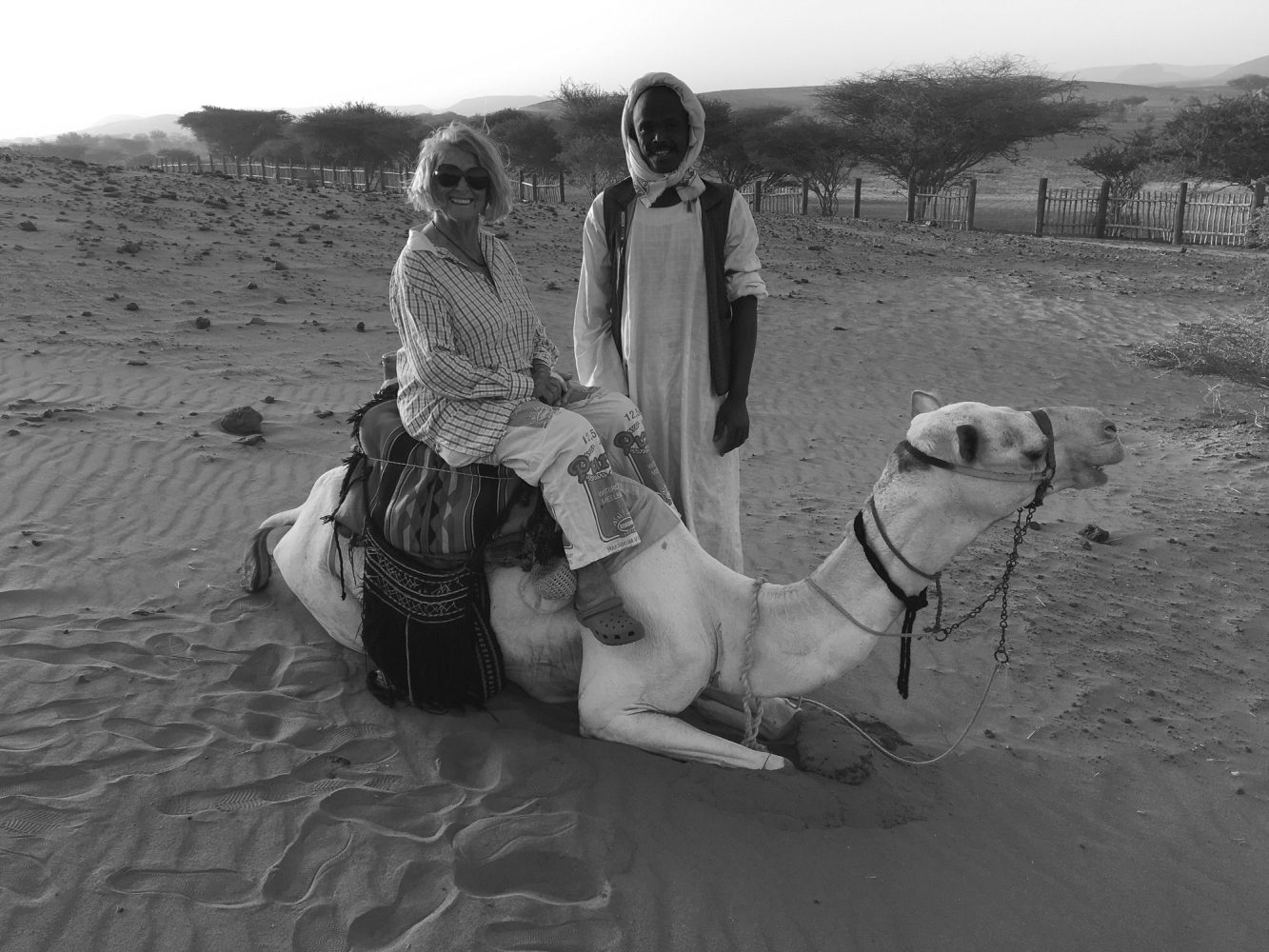 In January 2018, Albu flew home to Cape Town for three months while Tracy continued by ferry to Greece. The two were reunited and continued through Croatia, Slovenia, Austria, Germany, and Belgium, before arriving in London for Julia’s 81st birthday. The plan was to drive Tracy back to Cape Town, but she fell ill and was hospitalized for five months due to bilharzia and double pneumonia.

Many say you should travel while you’re young, which makes sense in many ways. Julia casually wrote about her age, mentioning incontinence pads, achy bones, painkillers, and the benefits of waterproof crocks in grungy hotel rooms. She realized she hated camping, tents, and communal showers and bathrooms. Rustic facilities wore her out, and she couldn’t partake in many activities due to knee pain, but she went anyway. “Age was also afforded such respect and grace,” she wrote. “I was treated so well everywhere I went, from the border posts where I was allowed to go first, to the truck drivers who fell over themselves to ease our passage.”

Hunter Thompson wrote that “life should not be a journey to the grave with the intention of arriving safely in a pretty and well-preserved body, but rather to skid in broadside in a cloud of smoke, thoroughly used up, totally worn out, and loudly proclaiming ‘Wow! What a Ride!'” Julia Albu certainly did that. The octogenarian died at home on August 2, 2021. She was 84. 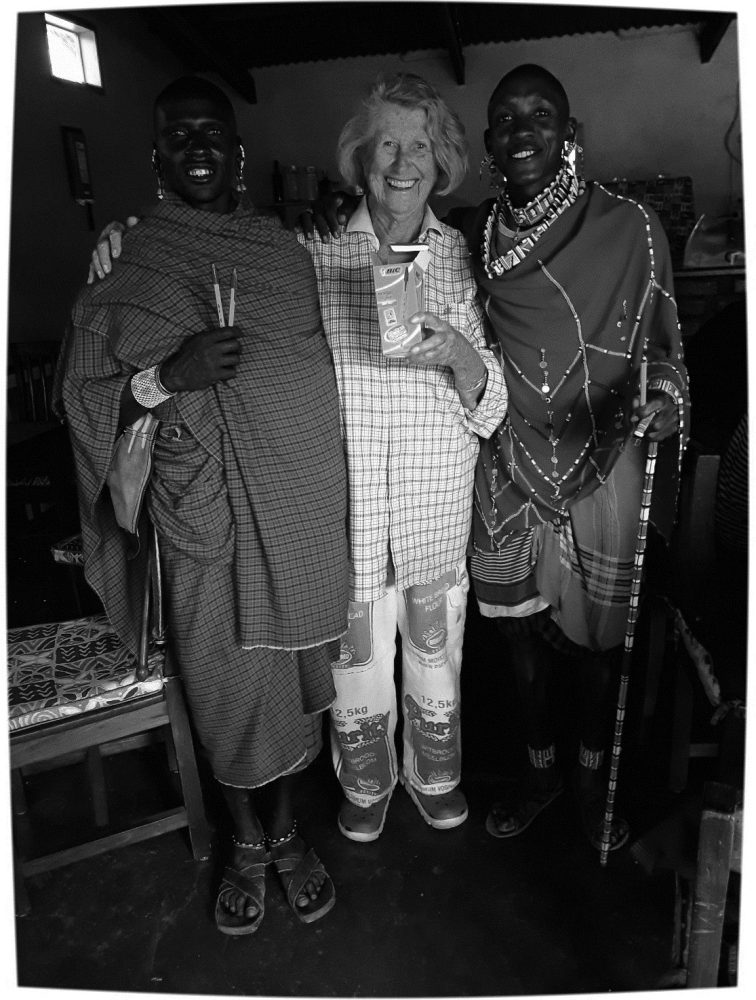 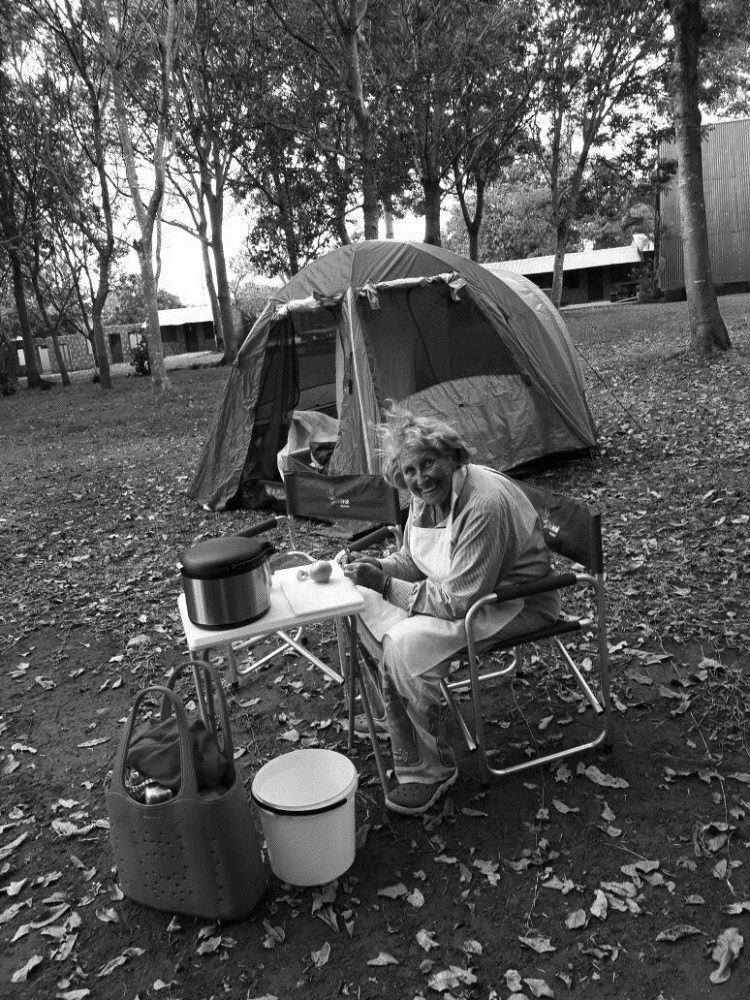