I still remember handing over the $500 for my first Volkswagen van. It was a 2WD 1980s Vanagon, with no pop-top, no back seats, and to be honest, hardly anything that actually worked. The color? Light brown on dark brown on rust-brown, the latter taking over more of the two formers every day. The fuel hoses leaked, the bushings creaked, and the transmission was so bad I had to drive the short distance home from the used car lot in reverse. It was, without a doubt, a complete piece of crap, and I loved it. I spent the next year fixing that van, which became known as Lana, and driving it around with a stupid grin on my face, pursuing adventures with the windows down and a tool kit close by. Eventually, the honeymoon phase passed, though, and I realized that my circle of adventures was rapidly shrinking. As much as I wanted to explore the world in this VW, its tired chassis and lethargic motor weren’t up to the challenge. So, like countless Vanagon owners before me, I put away my classic rock tape, took off my flannel, and passed my beautiful money pit on to its next loving caretaker.

The old rusty VW was soon replaced by a trusty Toyota, and while that 4Runner did everything I asked of it, I couldn’t help but dream of a modern successor to my old Vanagon. The annoying part was that if I lived almost anywhere but the United States, I could have one. In places like Germany, you can not only buy a modern Volkswagen campervan capable enough to take you around the world but one cool enough to live up to the Syncro-Westy legacy their predecessors left behind. Case in point, the Multicamper. 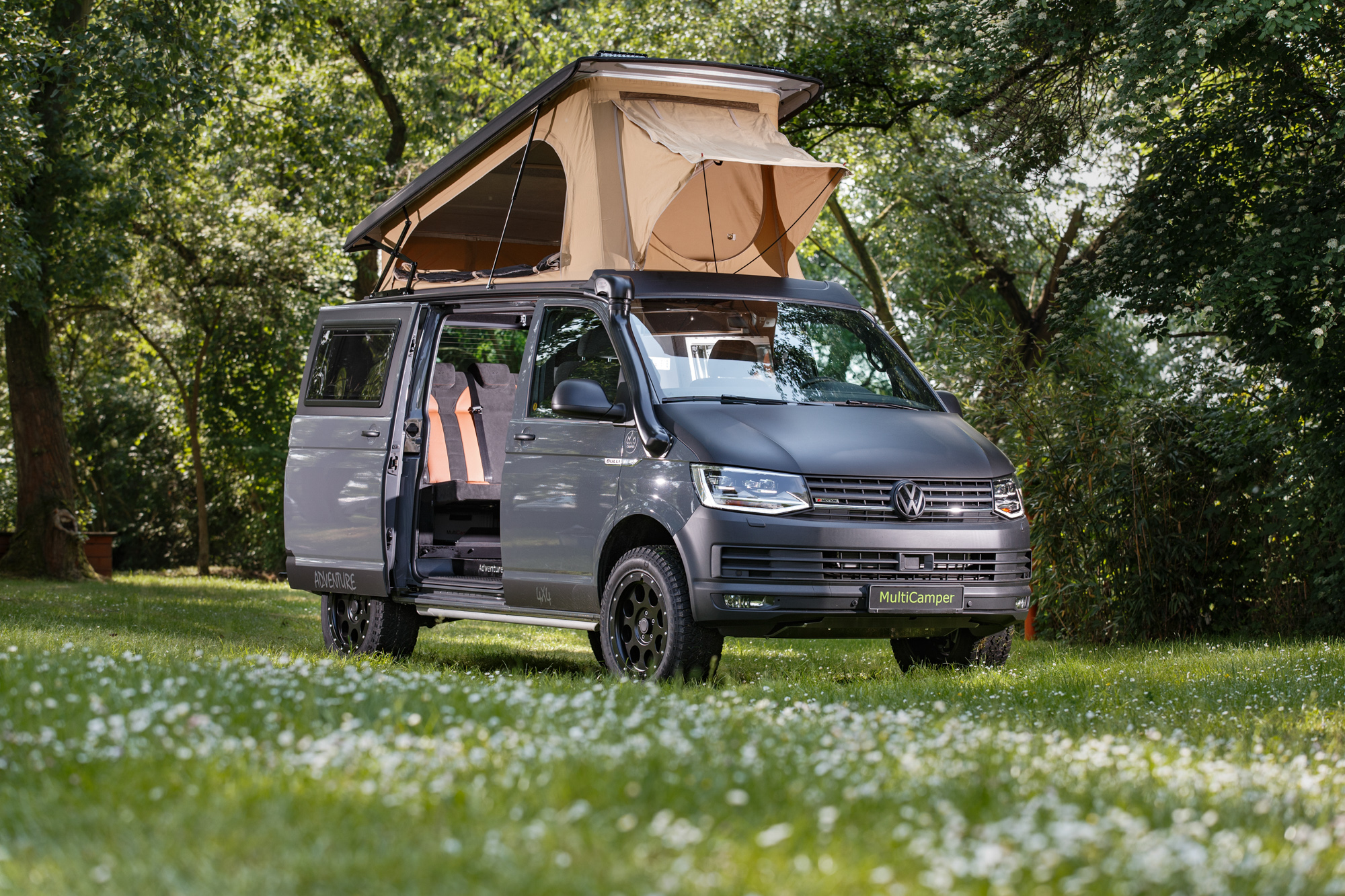 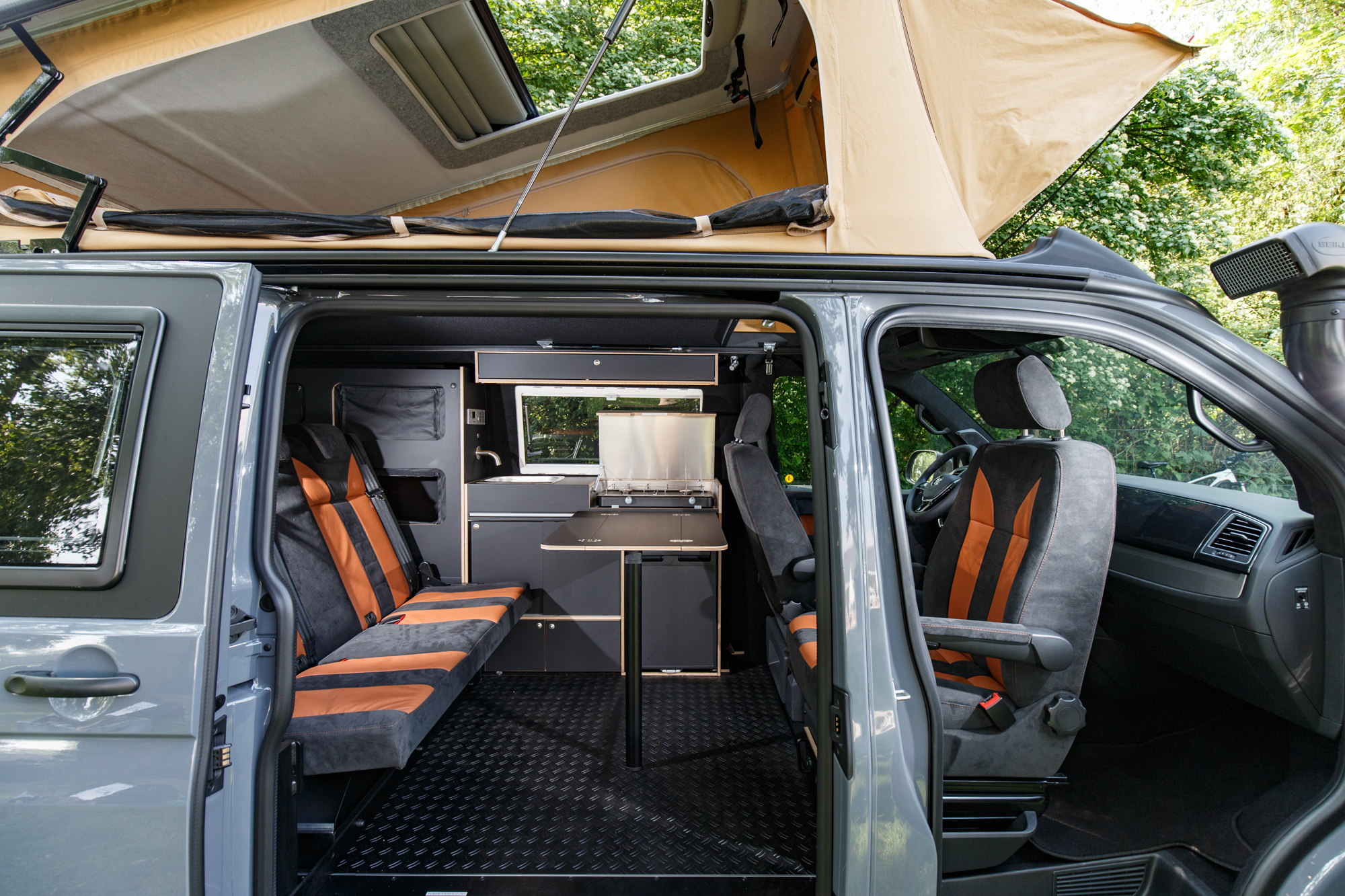 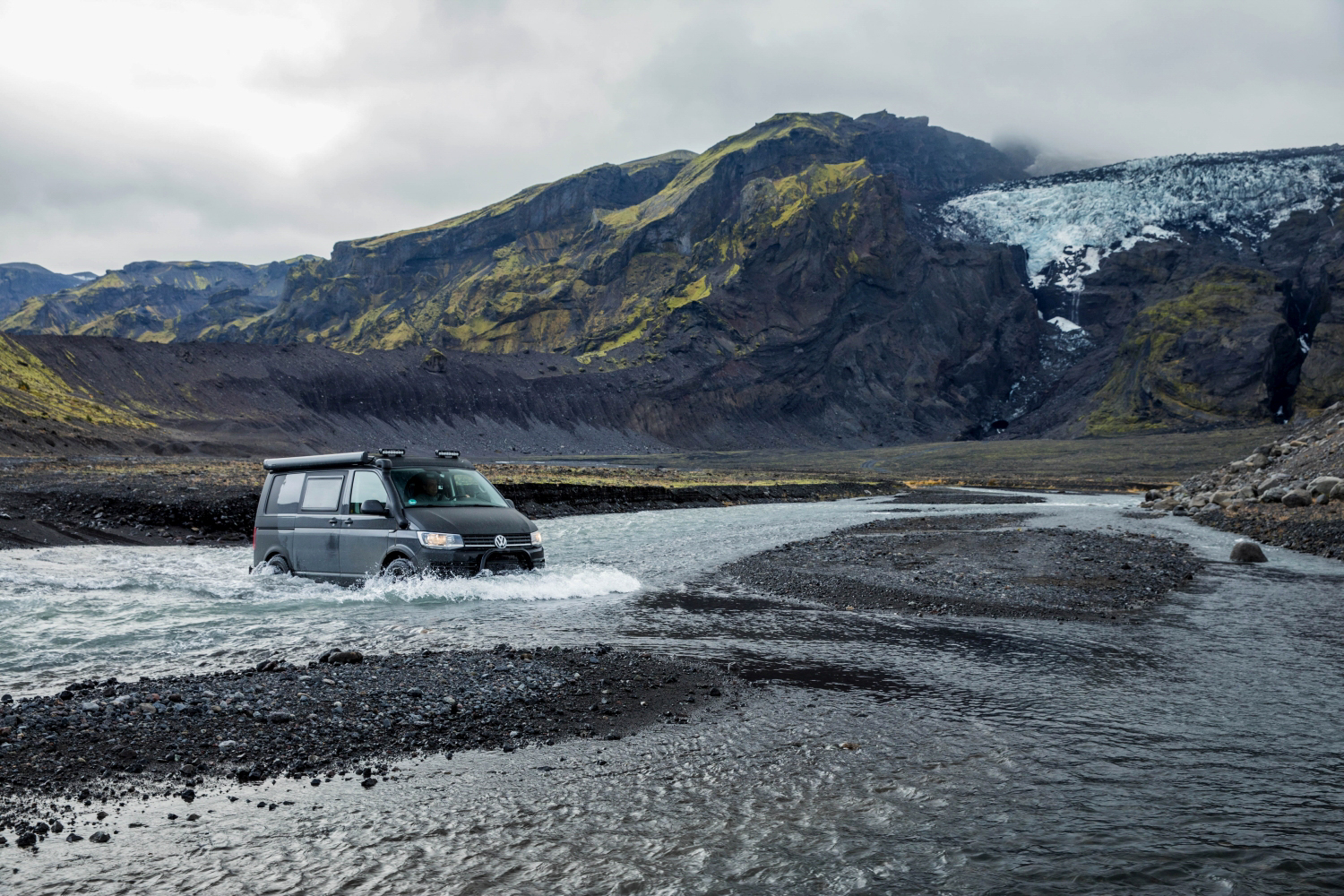 If the Vanagon was a wrinkled flannel shirt and a Grateful Dead tape, the Multicamper is a tailored Fjällräven jacket and an electro-beats playlist. It’s stylish, rugged, and adventurous, but with a twist of refinement and European chic. The pop-top silhouette and compact design deliver those warm VW vibes we love, but the chiseled lines, LED lights, and rear locker sends a clear message to any onlookers: this isn’t your grandfather’s Bus. What this is, is a 199 horsepower dream machine with sleeping and seating for four and a driveline that won’t leave you stranded on the side of the road—an adventuremobile for the 21st century. 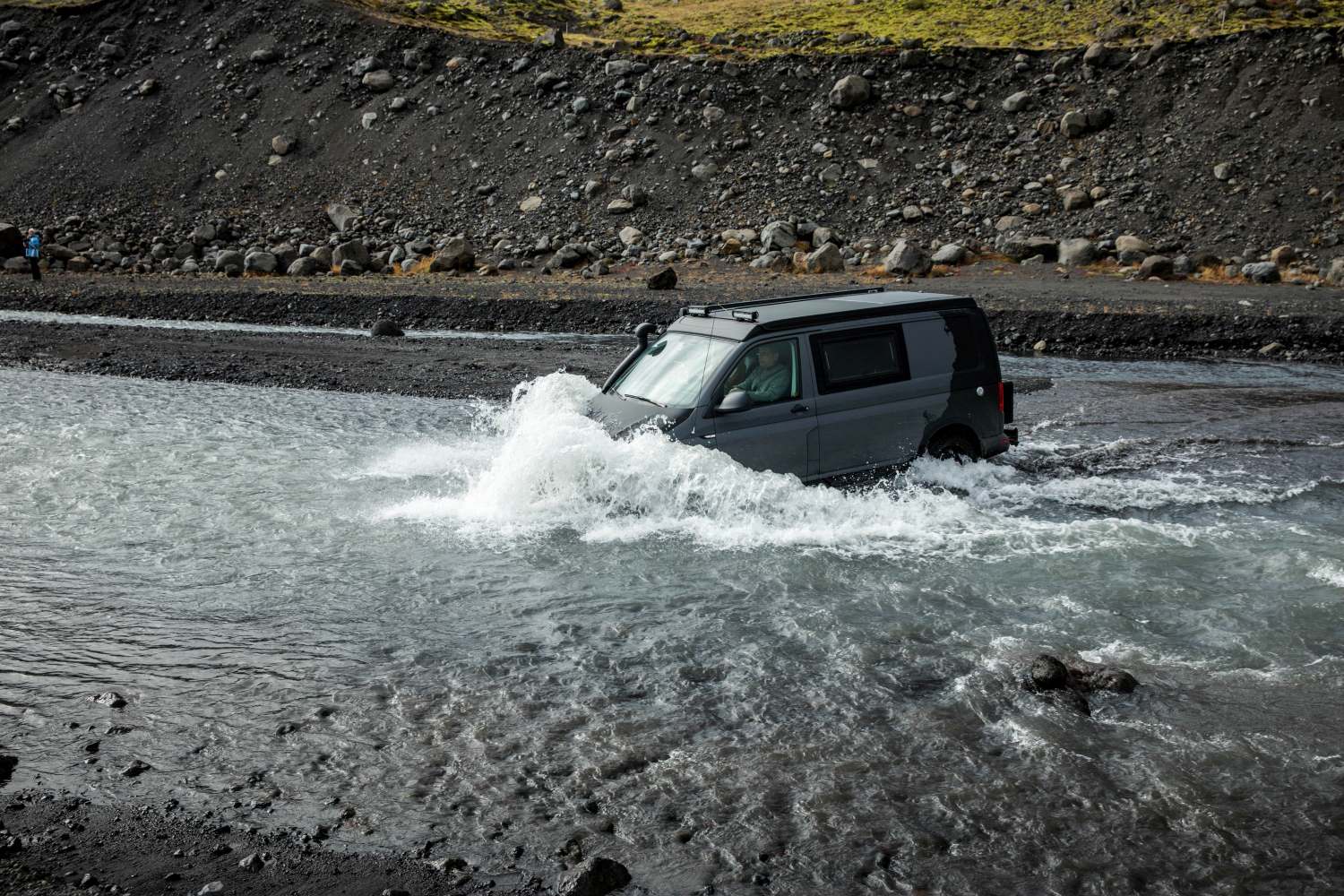 It’s all part of a custom package developed by Multicamper Founder Joe Neureuther back in 2010. At the time, Joe had been camping and off-roading for over 30 years, and he longed for a modern rendition of the Syncro Vanagon that could truly live up to his expectations of quality and capability. His solution was to offer vehicles based on the new Volkswagen T5/T6 Transporter, with custom additions specced to customer orders. It started with basic additions to the interiors, but as time went on, their team’s builds got serious, and they began developing parts like their Multidream seat and sleeping bench, Grand View cloth tent for the pop-up roof, and an HD dual swing-out rear carrier. 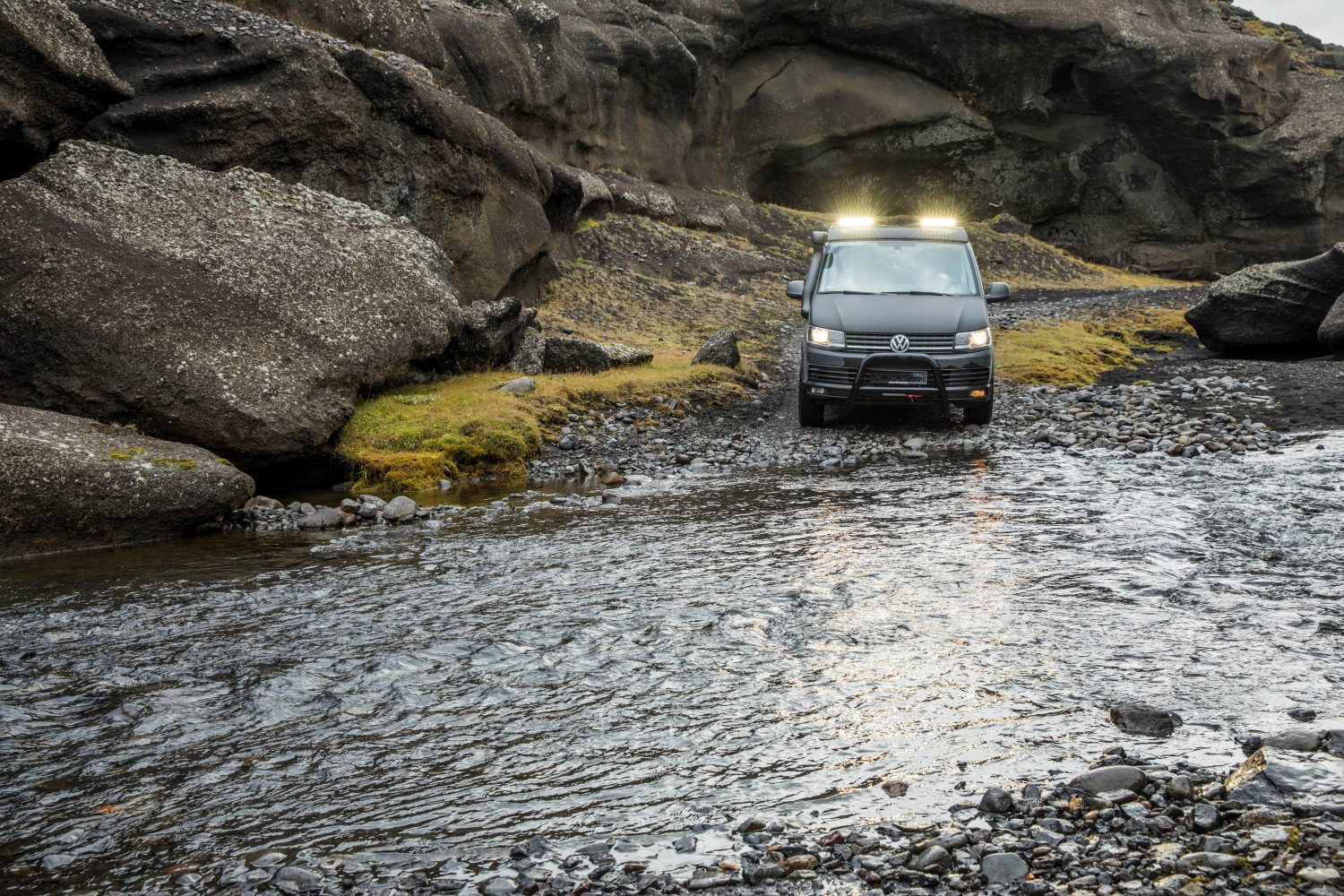 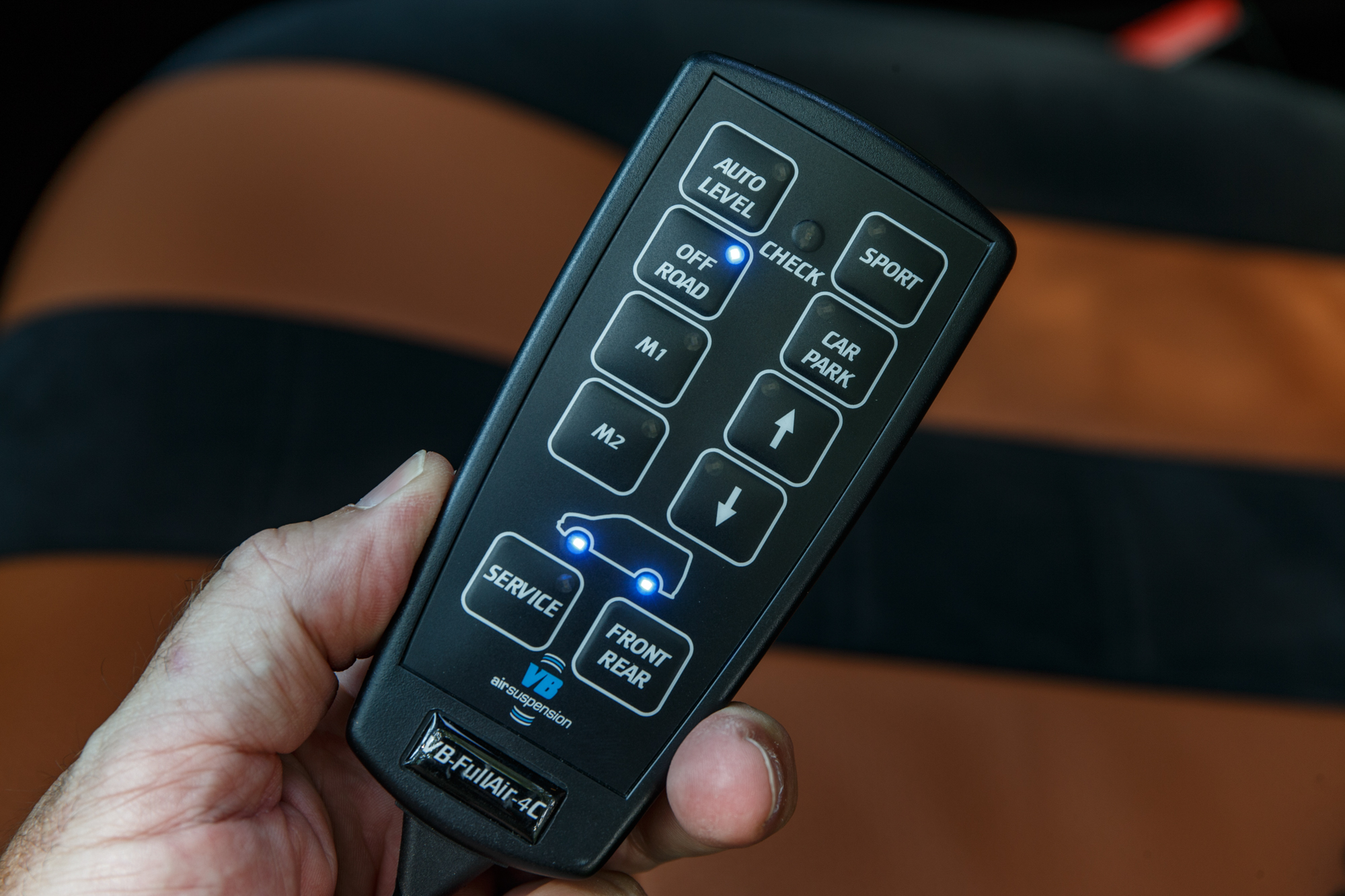 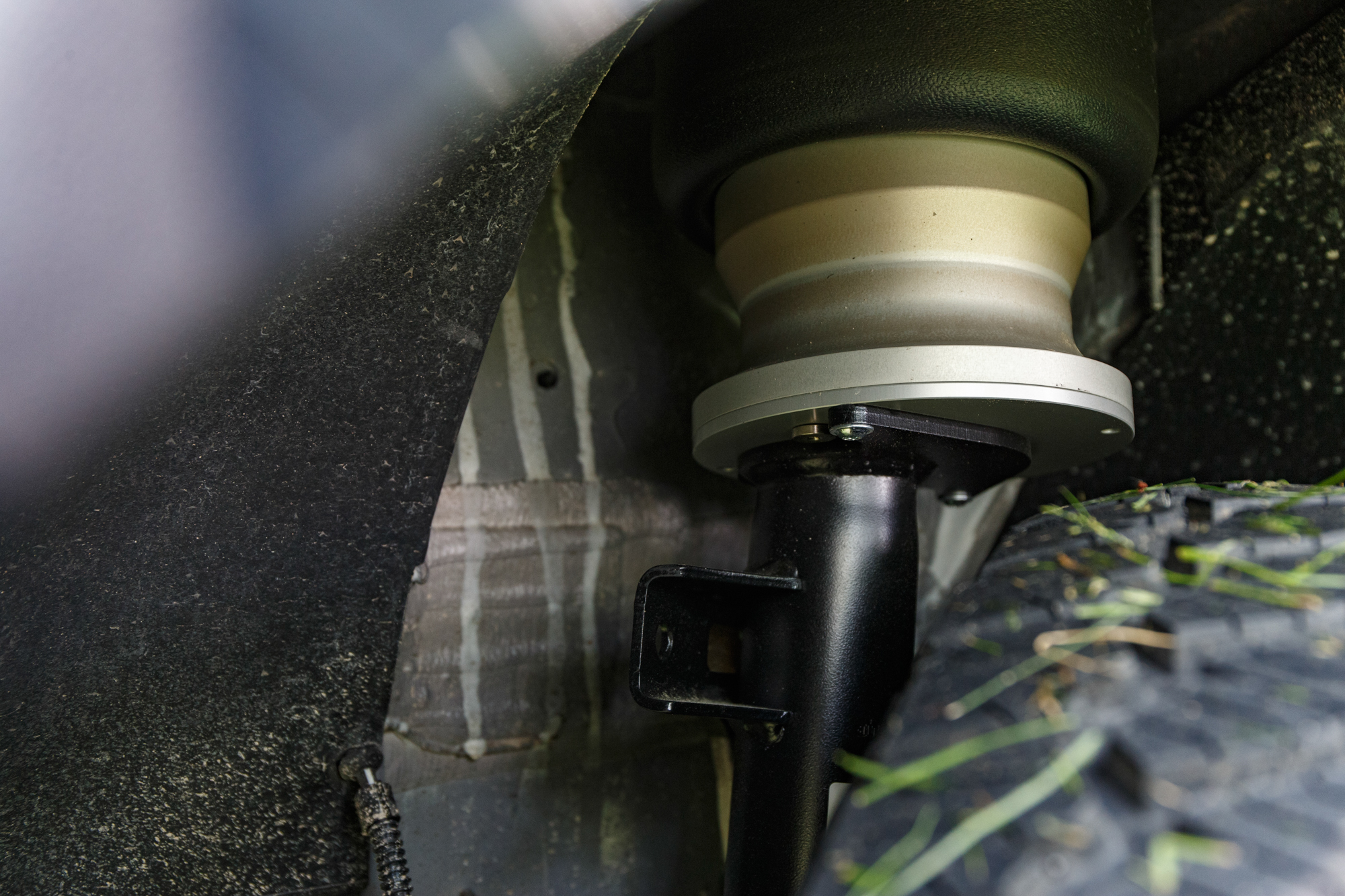 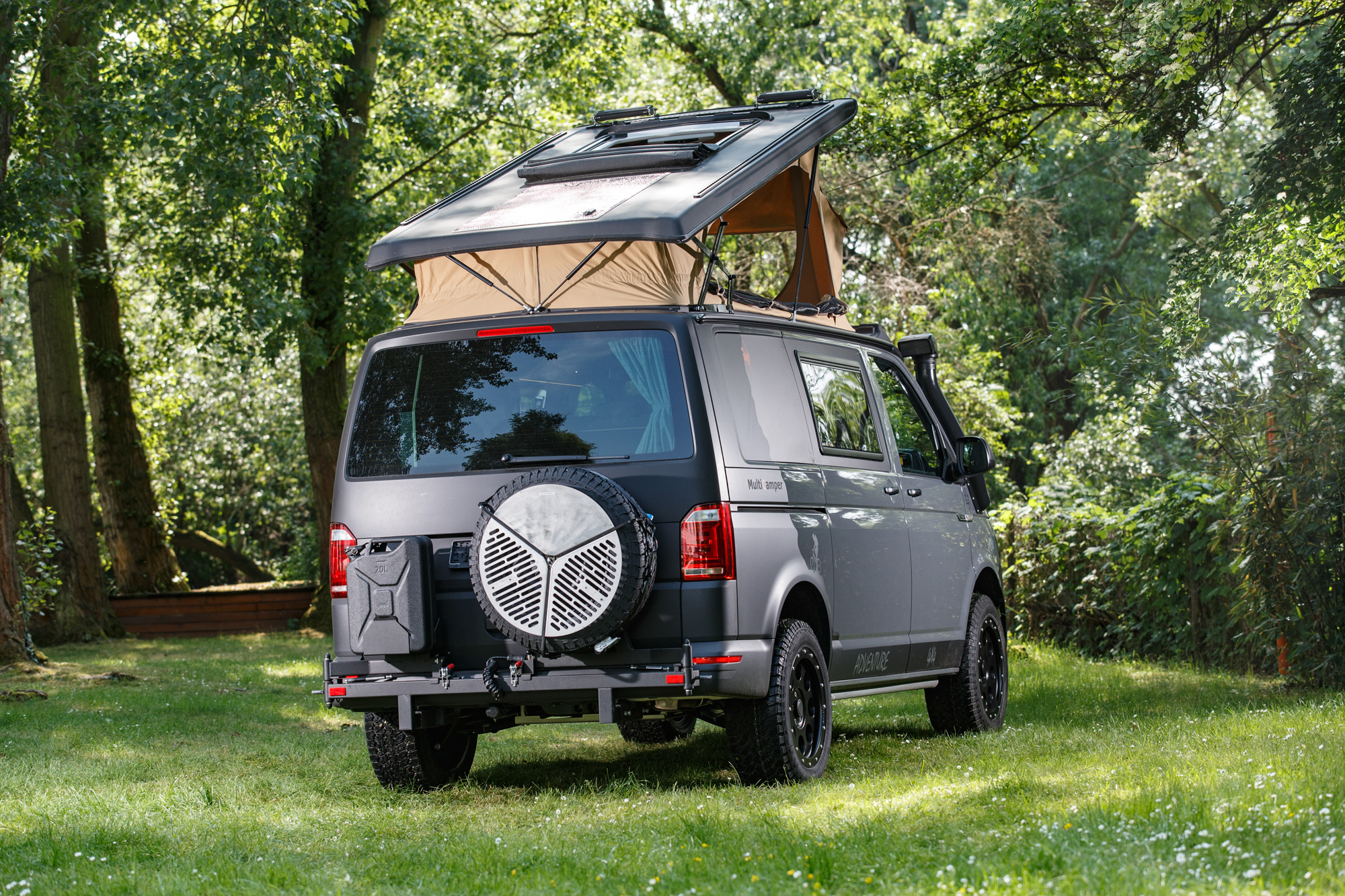 It wasn’t long before people started to take notice, including some rather big names like professional climber Stefan Glowacz and Triathlon professional and Ironman Hawaii winner Faris Al-Sultan, who wound up filming with the vans. Even Red Bull will be running three of their adventure campers at the Destination Red Bull Event in Verdun, France. “The Multicamper community is still growing,” noted Christian Quintel, their sales and marketing representative. “Our customers are testing their Adventure Campers to the max in offroad areas around the globe. We have vans exploring Iceland, Morocco, Turkey, North America, and even Central and South America.”

To be honest, I’m not the least bit surprised. Volkswagen vans have covered nearly every corner of the globe over the years, and the Multicamper platforms have a whole lot more to offer than the originals. The vans rolling off their factory floor are equipped with four-wheel drive, a rear differential lock, additional skid plates, sliders, lift kits, and even optional Seikel or VB air suspension systems with selectable ride height. Their top-end “adventure” campers can be equipped with a winch and front mounting plate, a snorkel for dust and deep water, and high-powered LED off-road lights for additional visibility. Then there are the living amenities which are certainly not shabby. 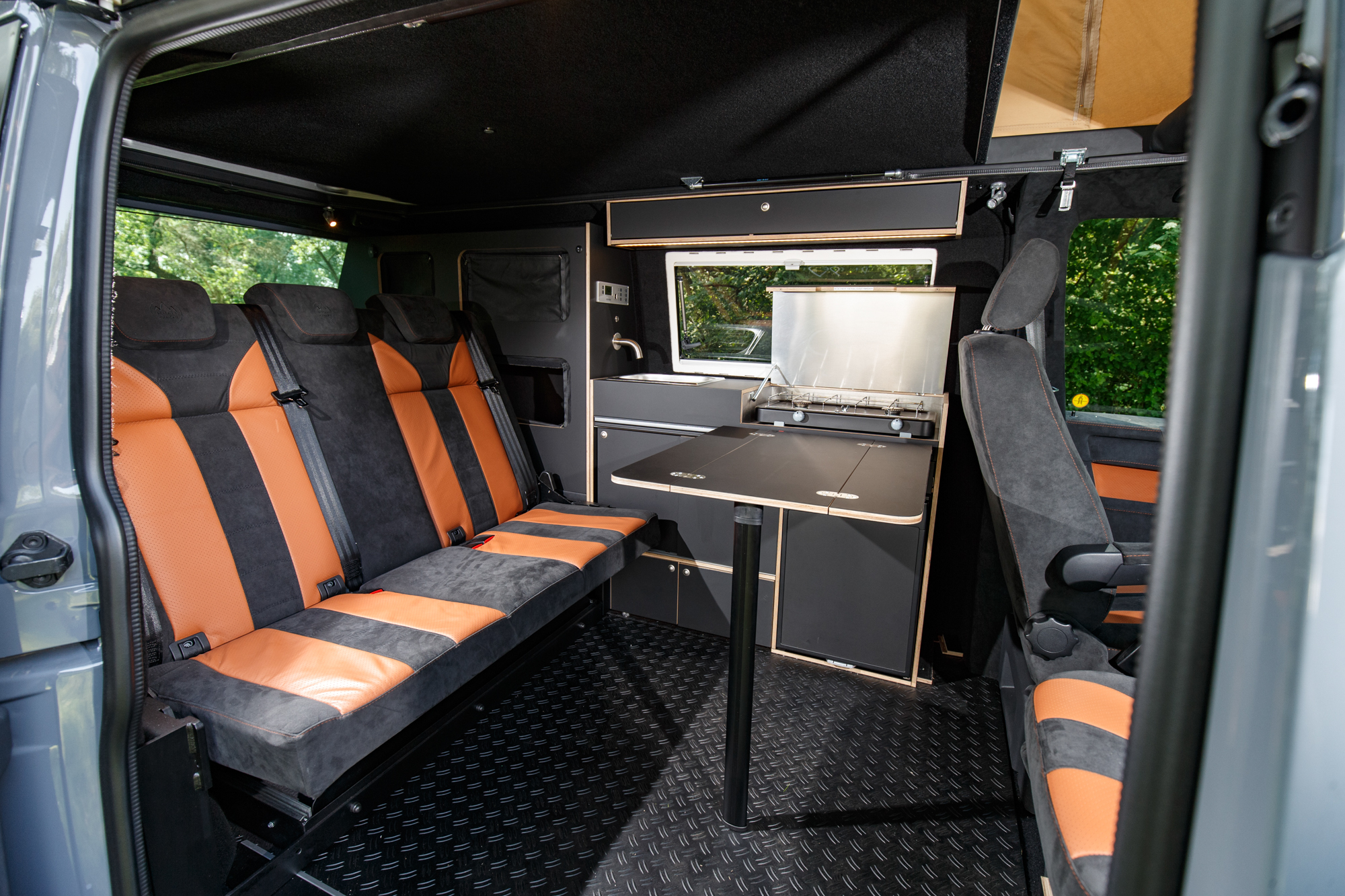 A compact kitchenette with plenty of storage and clever use of space adorns the middle of the van behind the driver’s seat. It features a sink, faucet, and removable camp stove with plenty of storage for pots, pans, plates, and cutlery in drawers and cabinets with marine-grade latches. A refrigerator sits below the stove, and a 40-liter fresh water tank is tucked inside the cabin and out of the elements. There’s also a smaller 12-liter gray tank which is used wherever environmental impact is a concern. House batteries run all the power ports, lights, and pumps inside the van, and can be charged by driving or the 150-watt solar panel mounted to the roof.

For eating meals, playing cards, and generally hanging out, a tri-fold table can be deployed between the rear sofa and the two front swivel seats to establish a comfortable living room for four. This is ideal for bad weather situations, where owners can retreat into the well-insulated van and crank up the heater for a cozy evening.

In the back, there’s a wardrobe for clothes and cubbies for personal belongings, as well as an exterior shower for rinsing off on the road. Of course, Multicamper understands that most outdoor adventures are going to require gear, so they included plenty of room in the ruggedized rear garage. It even has a cargo slide to make accessing everything a breeze. Oh, and speaking of a breeze, you can catch a nice one up in the Grand View pop-top with a retractable sunroof, perfect for stargazing at night or soaking in the warm in the middle of the day. 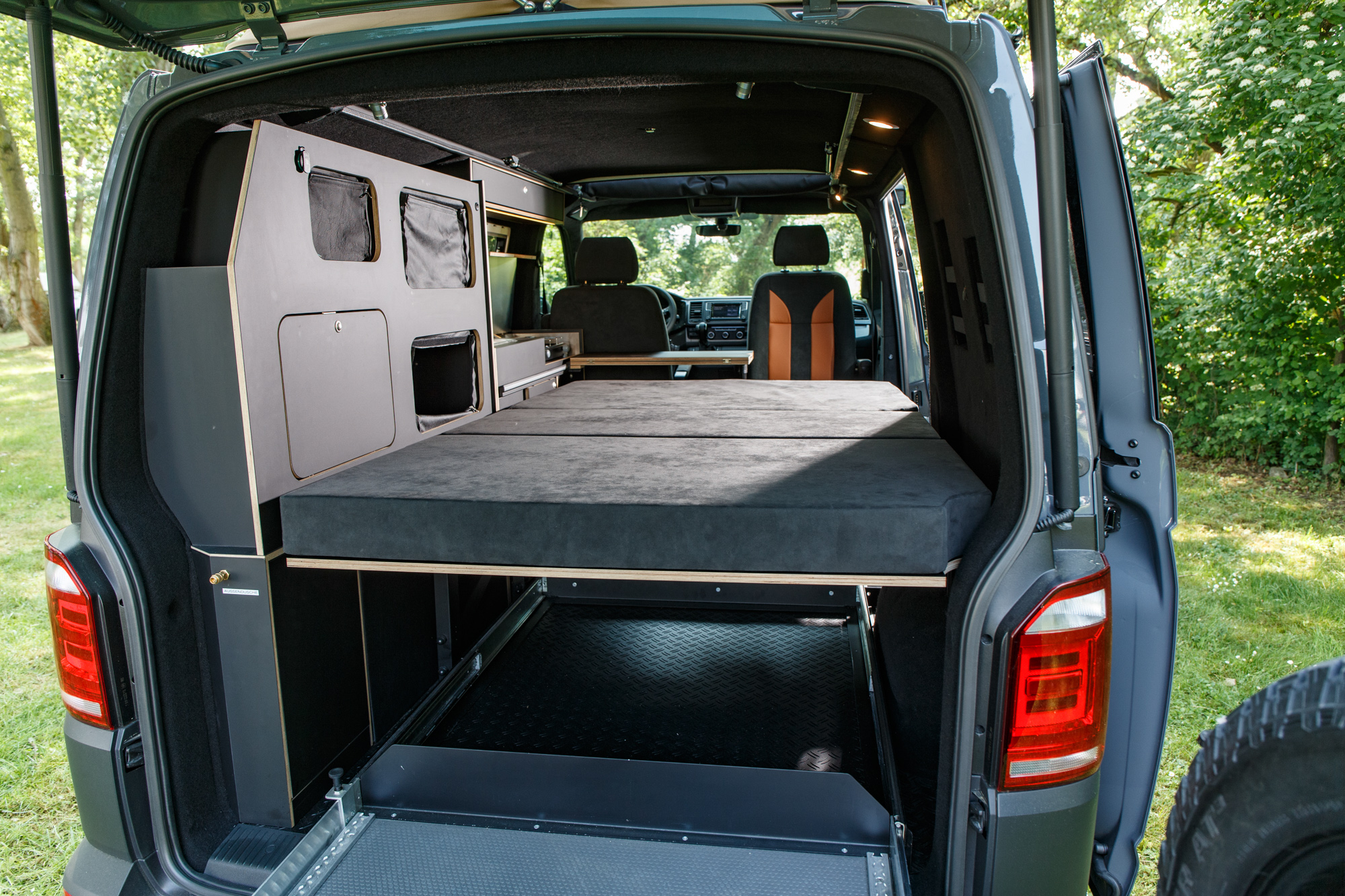 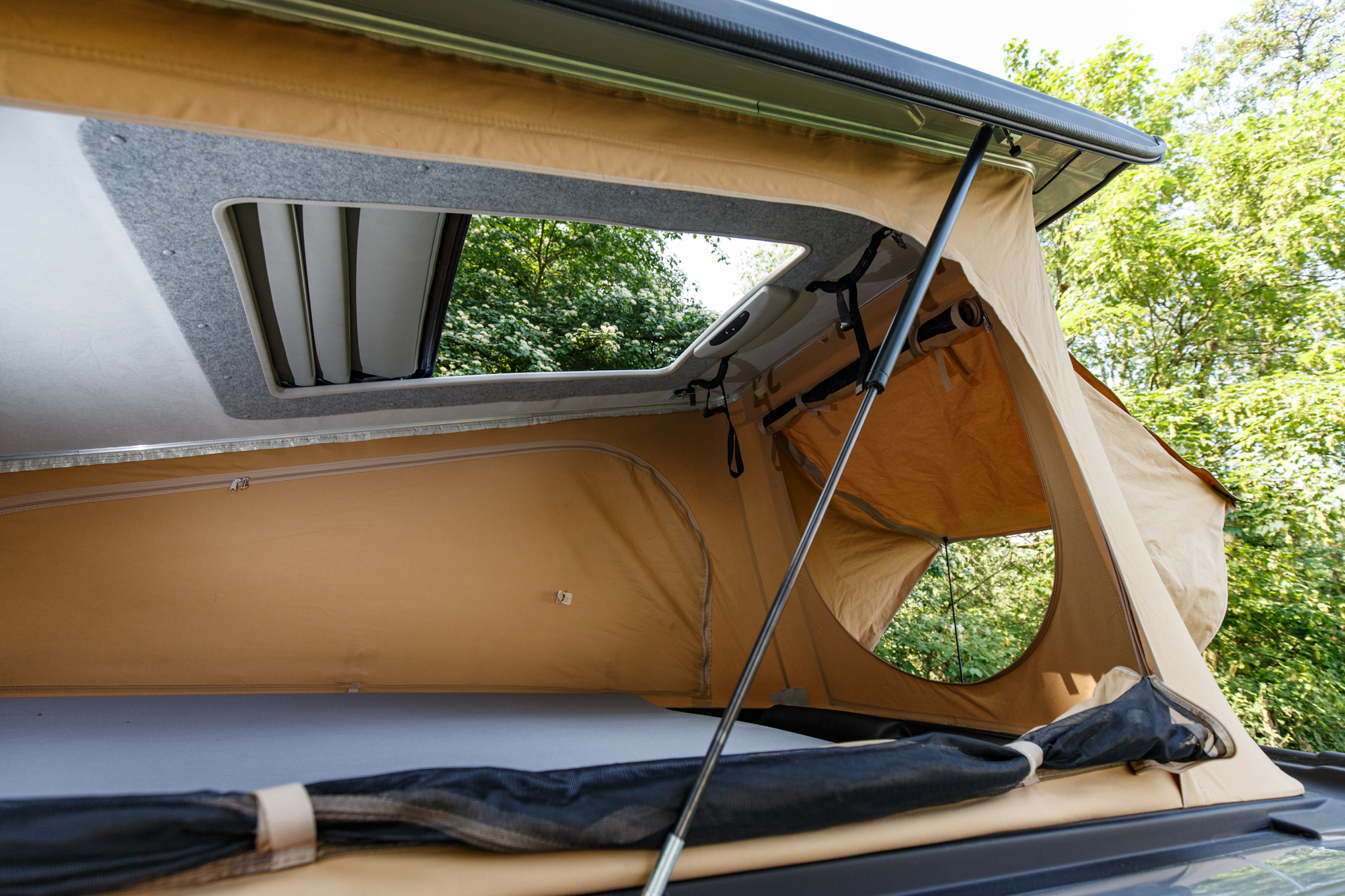 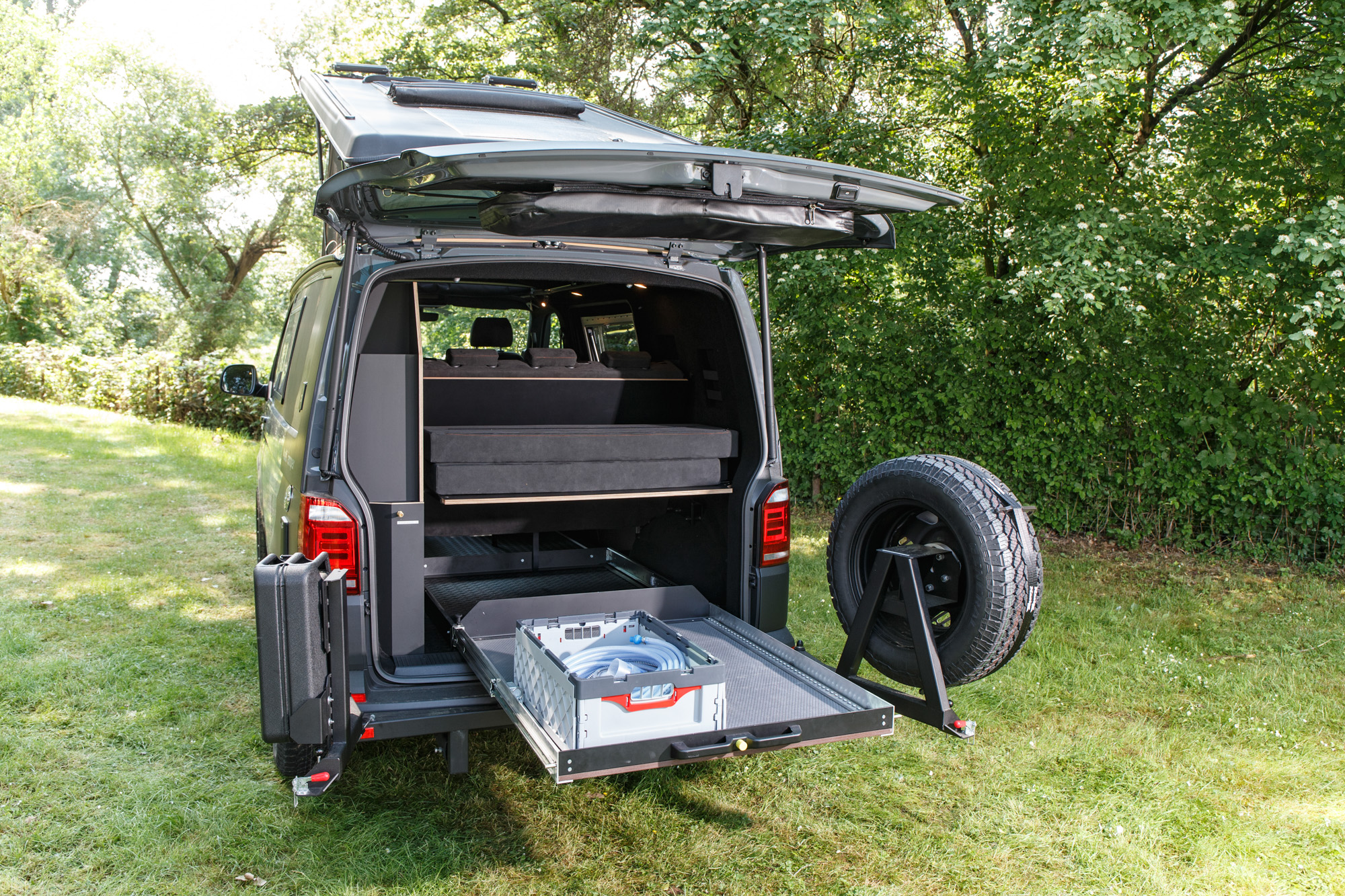 As you can imagine, with a vehicle like this, the build can be as big or basic as you dream it. Prices soar up to $90,000, but some vans can be purchased for less than $40,000. When you consider that 35-year-old Westfalias are fetching that much here in the States, and Winnebago is selling their 4×4 van for a base of $163,000, those prices start to look really good.
Unfortunately, the price doesn’t matter for those of us in North America, because unless you’re lucky enough to have an overseas address, you won’t be bringing one of these beauties back home anyway. For now, at least, we are stuck limping our aging Vanagons along, hoping they’ll carry us through to our next adventure. At least we’ll have stories to tell around the fire, right? I just hope it’s not another engine fire.
To learn more about Multicamper, visit them on their websitehere. 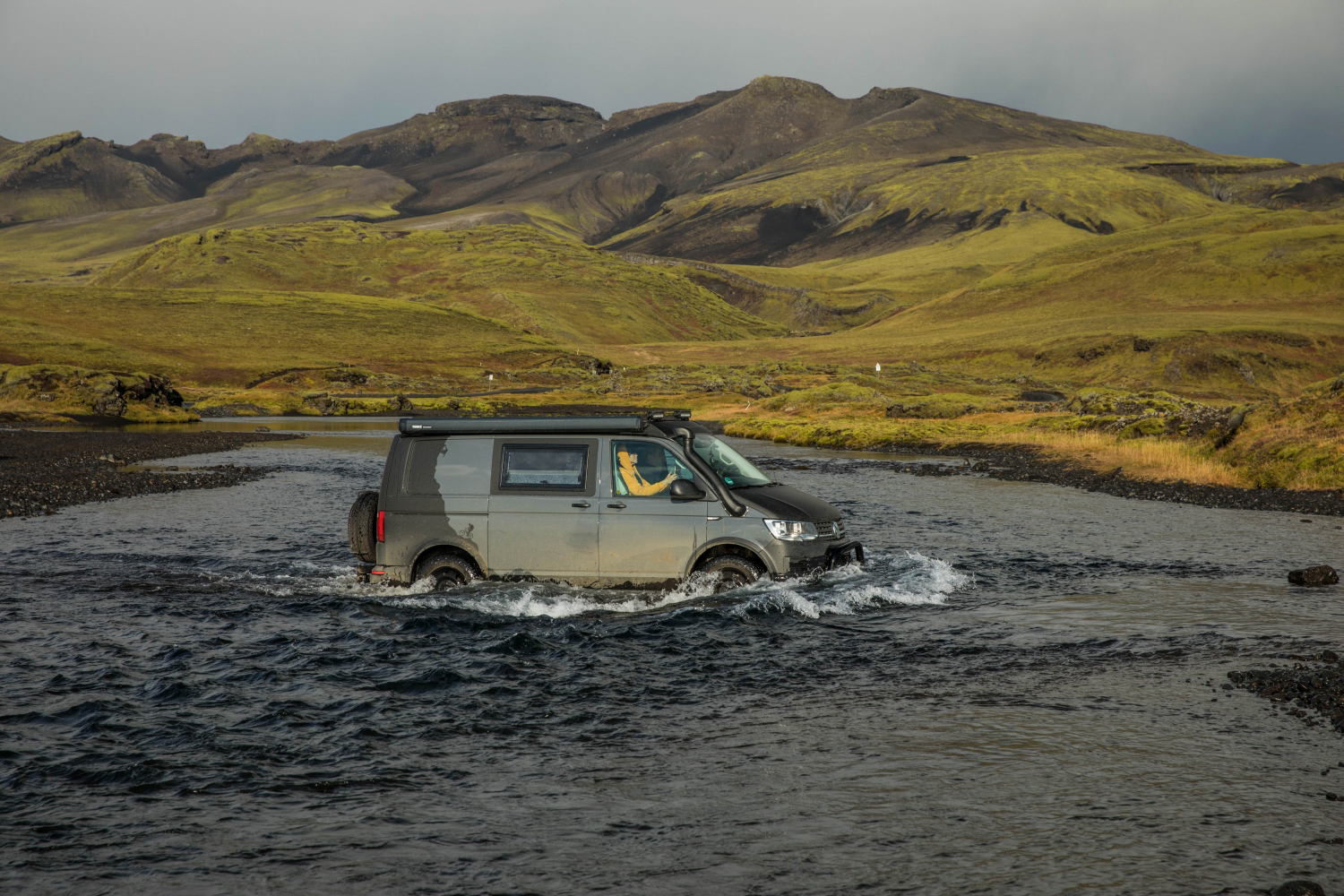 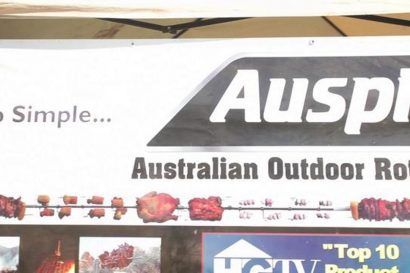 Auspit: An Interview with Jon Sattler 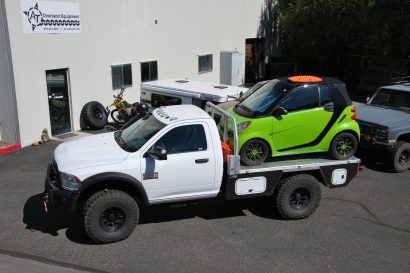 AT Overland Launches Their New Tray Bed and Composite Boxes