Thomas Lermer, the owner of EXTREM Fahrzeuge GmbH, welcomes us with a wide grin to his workshop and the introduction of a very special Land Cruiser. Known mostly for his EURO4 and EURO5 conversions for the Land Cruiser which he´s developed in house, he´s now taken a leap into the future. “Everybody talks about clean energy and e-mobility, and as we were looking into developing a EURO6 conversion for the Land Cruiser”, Thomas Lermer explains, “we also looked further and wondered if it would be possible to convert a Land Cruiser to full electric drive”. “This was about the same time when we were approached by a customer with the request for an all-electric off-road vehicle for a game farm in southern Africa. His requirements were 40-60bhp and a range of 60-100km on a full charge.”

And this is just what we are looking at as Thomas Lermer leads us into the workshop: The Toyota EJ79. 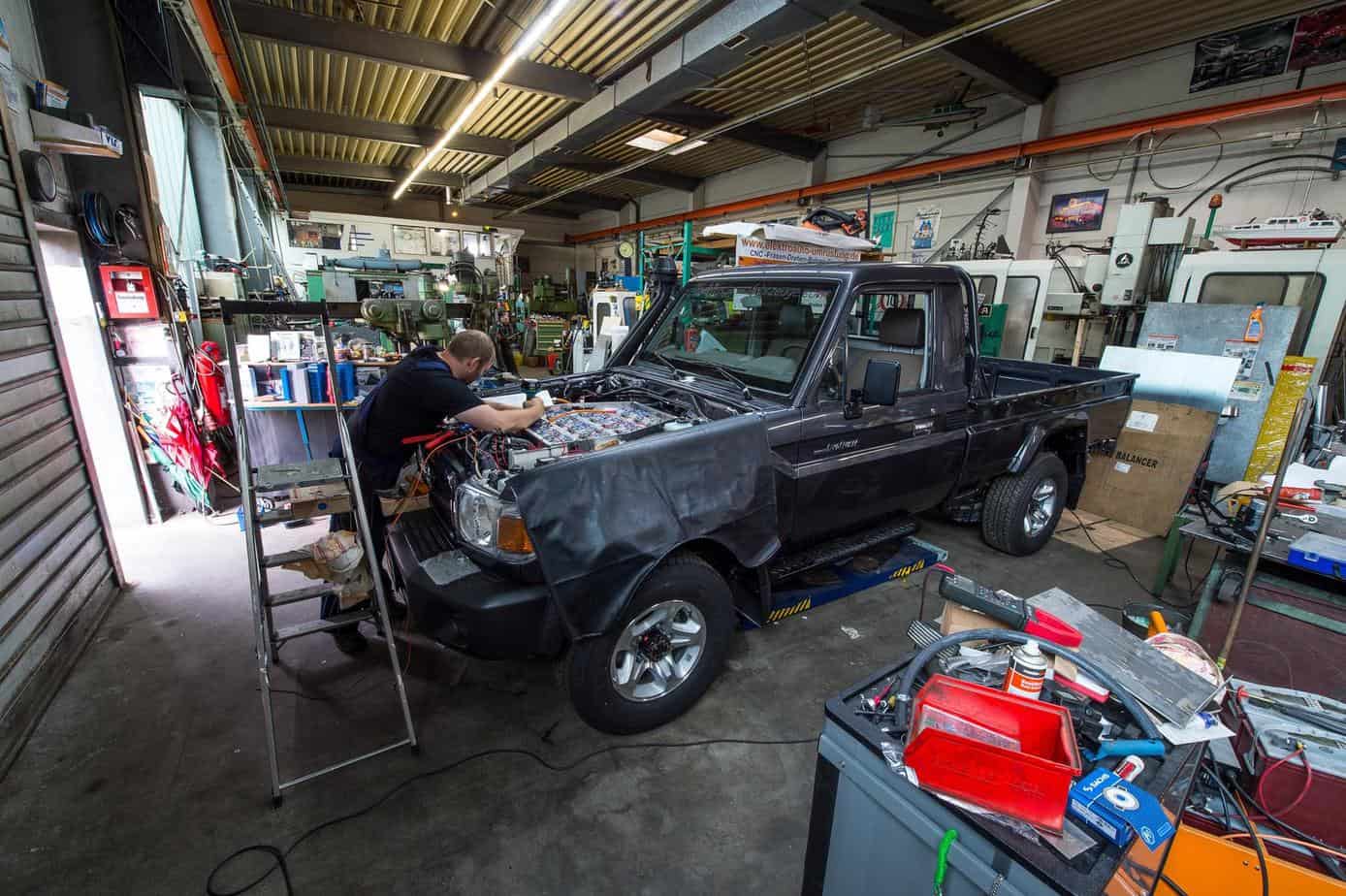 From the outside it´s a standard Bushtaxi and the only clue visible is the electric plug where usually the fuel tank cover would have been. 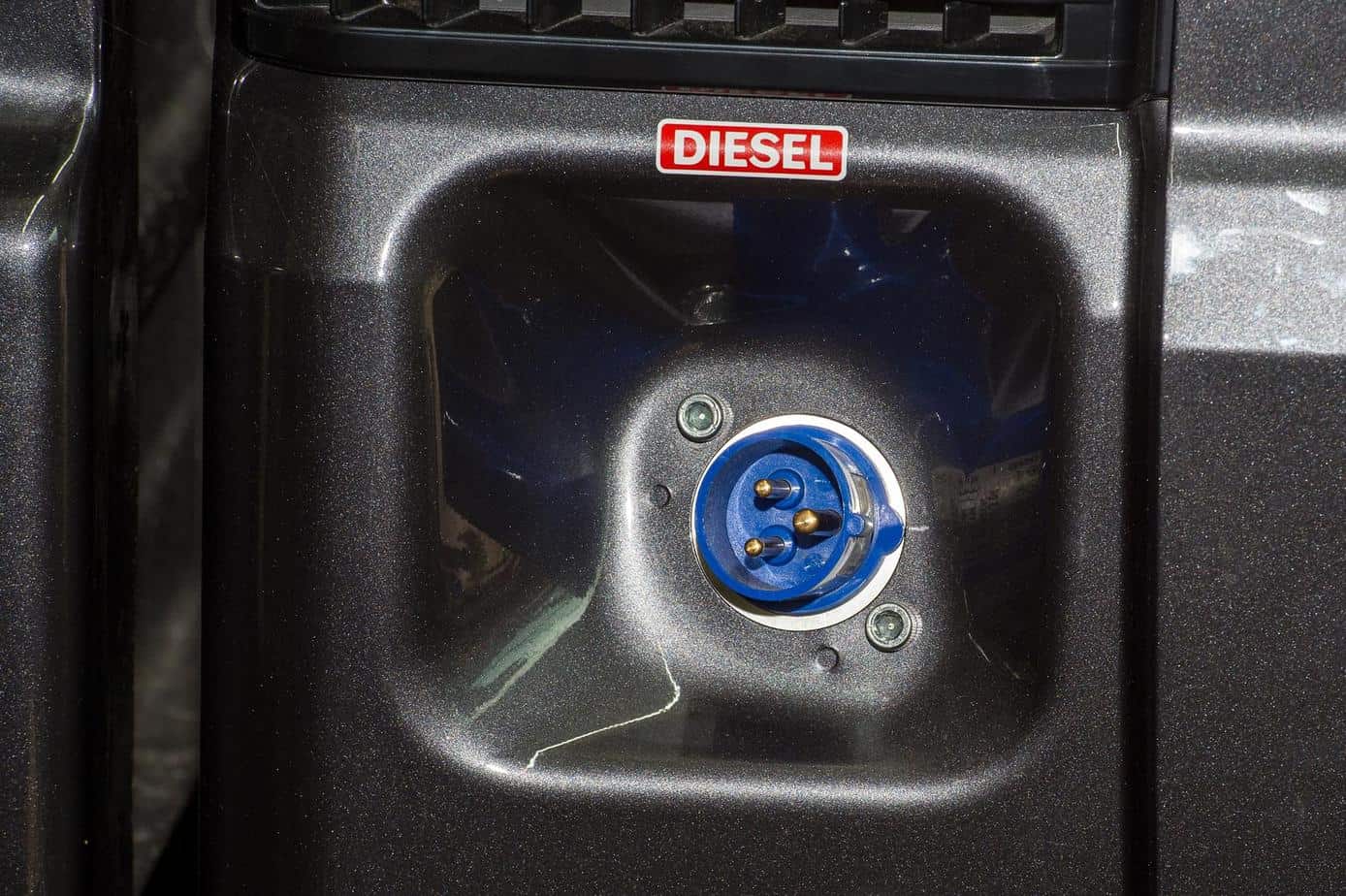 On the inside there are no surprises either, just pure Land Cruiser simplicity. 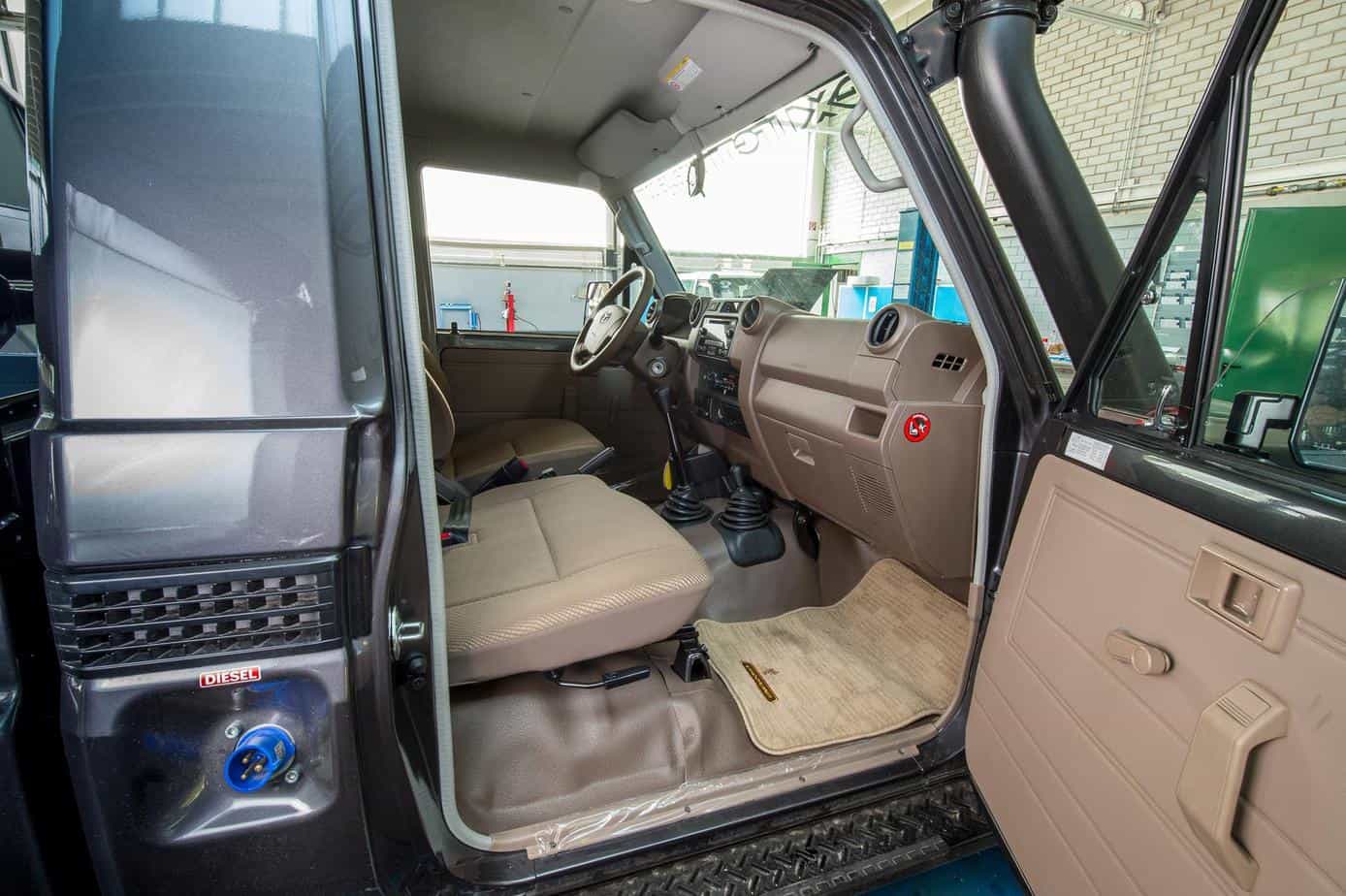 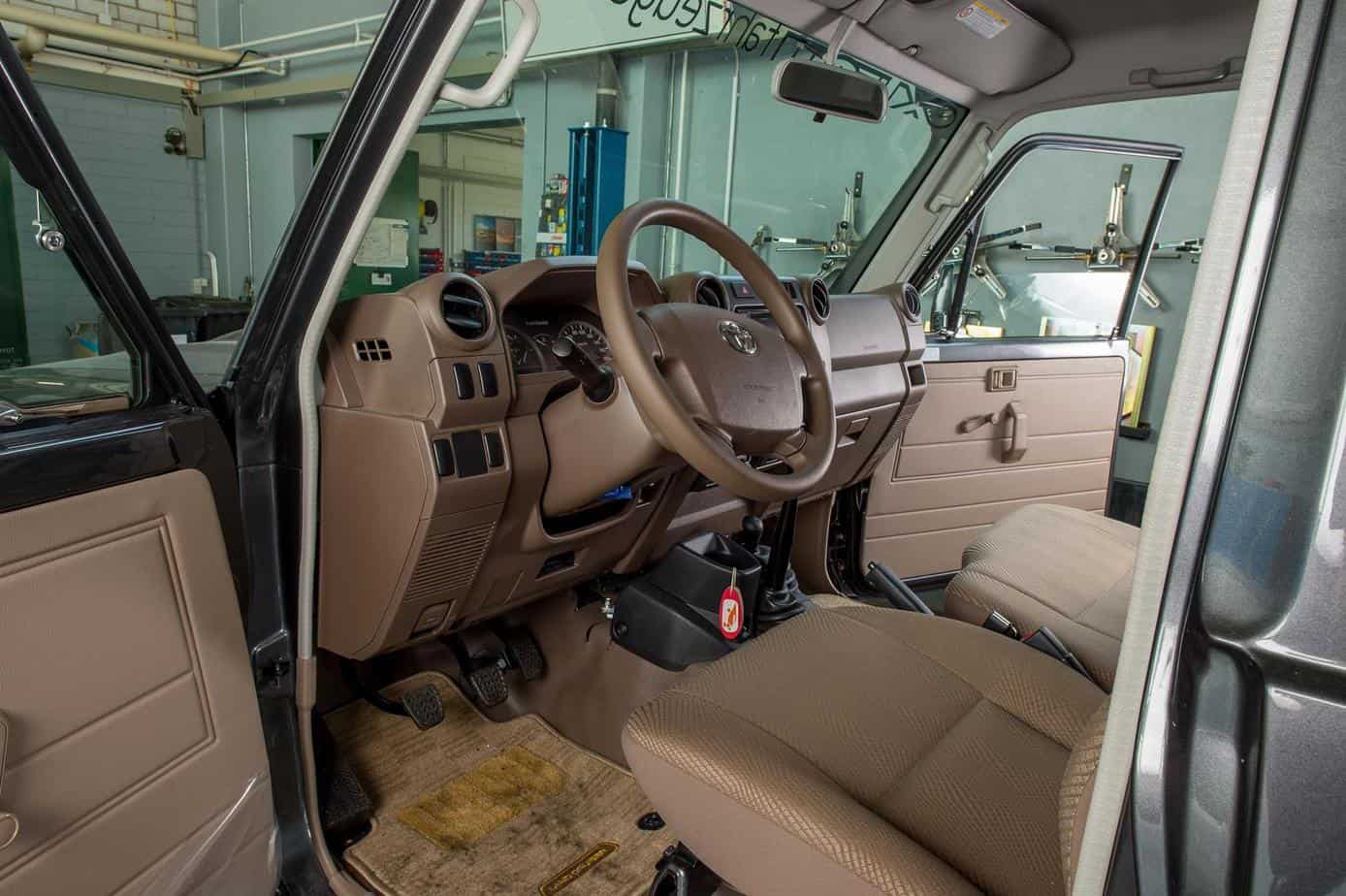 But turning the key in the ignition (yes there still is a key!) one realizes that this isn´t a normal Bushtaxi at all.
Instead of the accustomed sound of six cylinder engine there is……nothing! Really!
“Starting the EJ79 is a bit of a new experience” laughs Thomas Lermer seeing my puzzled look “but” he adds “just put in the gear and let´s go for a ride” 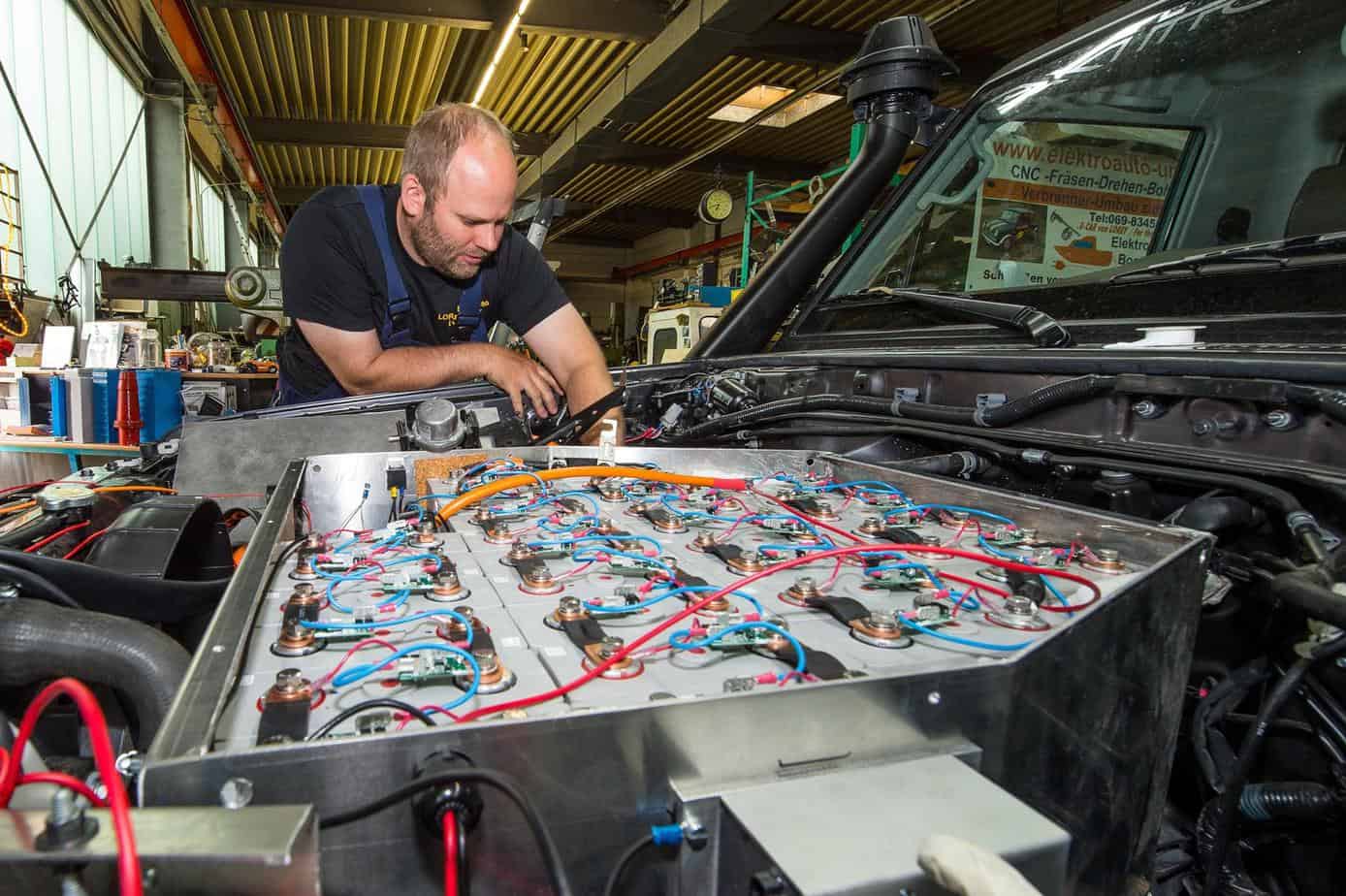 As the electric motor is directly connected to the manual gearbox by an adapter flange you engage and shift using the clutch and drive it just like any other combustion powered car. 45bhp move the Land Cruiser forward and acceleration is nothing to be expected from this power output as it feels more like driving an old Land Rover Series 1. The top speed of this very first prototype is somewhere between 90 and 100km/h depending on the wind´s direction 😉 After a few miles through the villages surrounding the workshop we take the EJ79 offroad and are surprised by the agility of the electric drive. 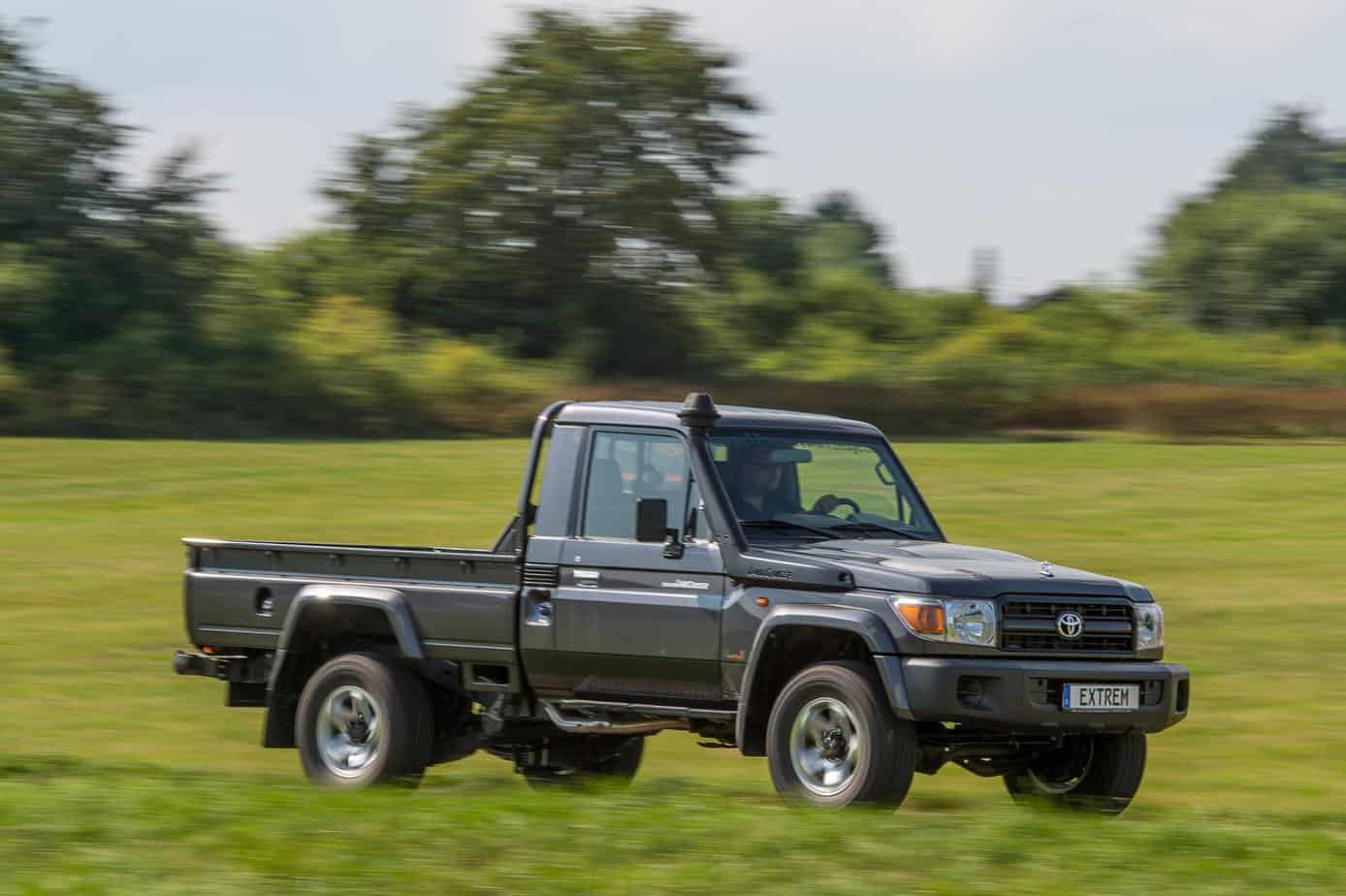 Okay, it could do with a few more ponies and it takes a little while for me to get used to the moment the electric motor kicks in when parked uphill, but Thomas explains that “there are two further vehicles being built with stronger engines and a bigger range of operation as these vehicles will receive 2 battery packs, thus giving them a top speed of 120-140km/h and a range of approx. 200km with about 80bhp from the motor.” 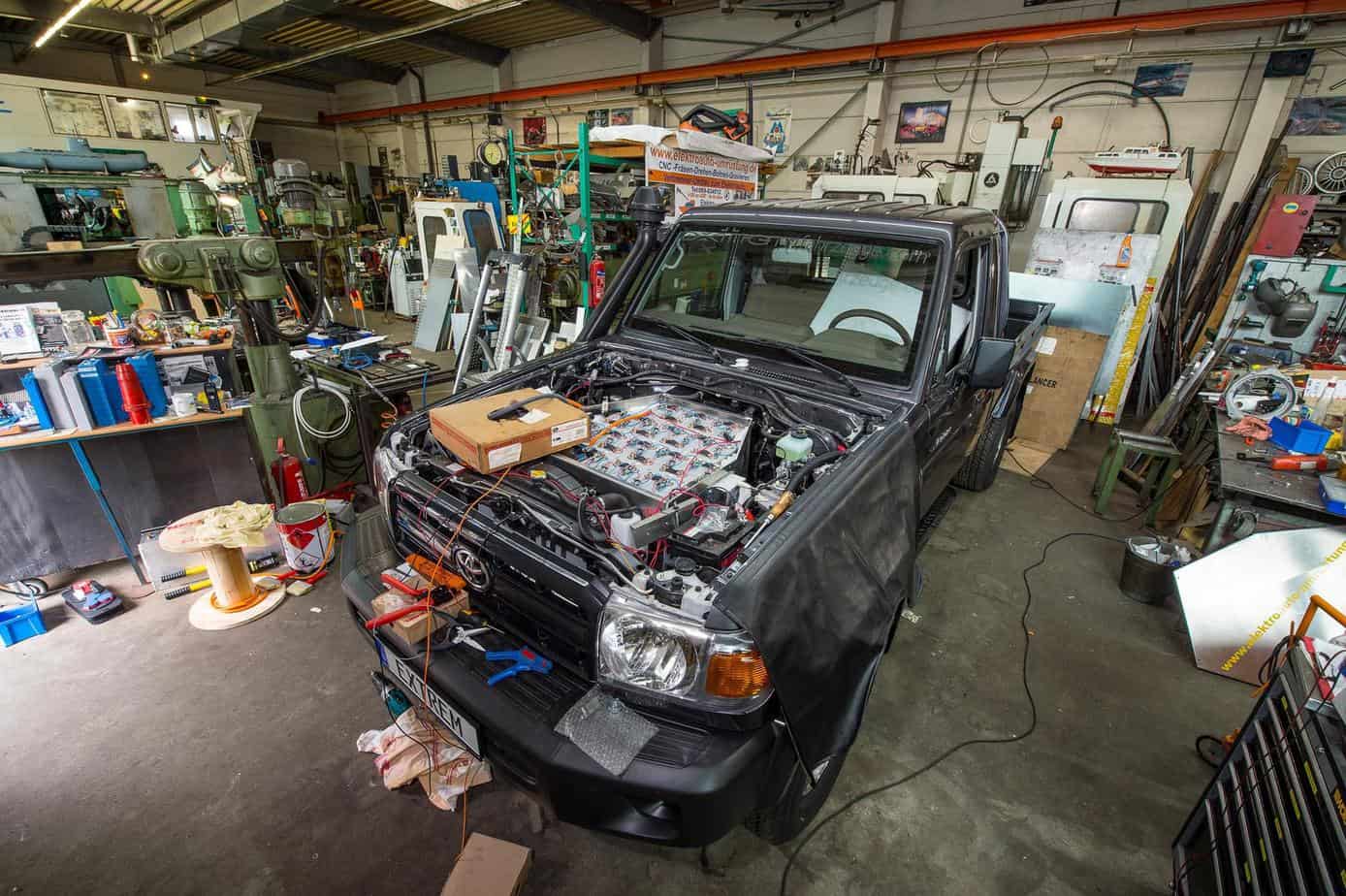 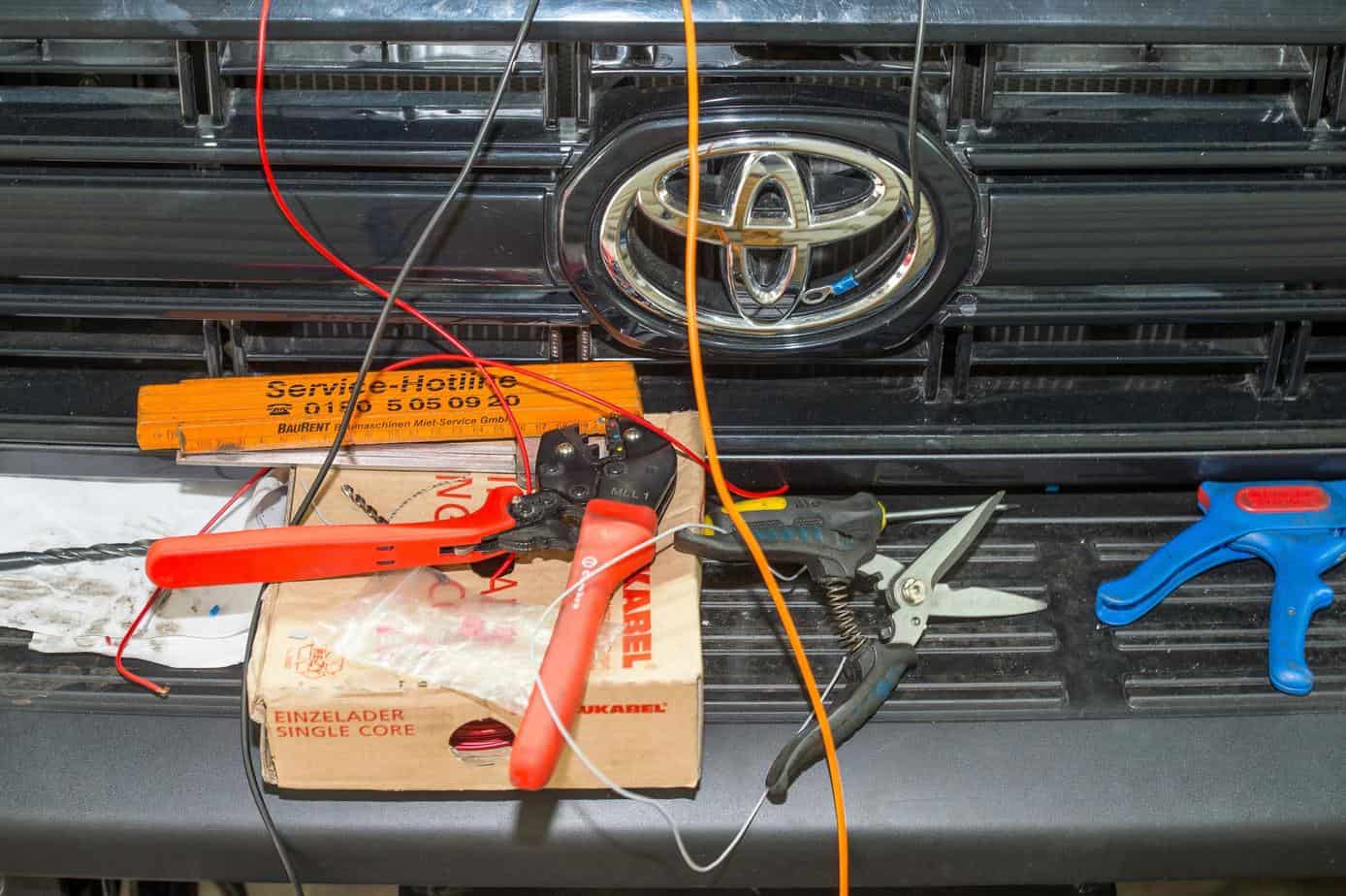 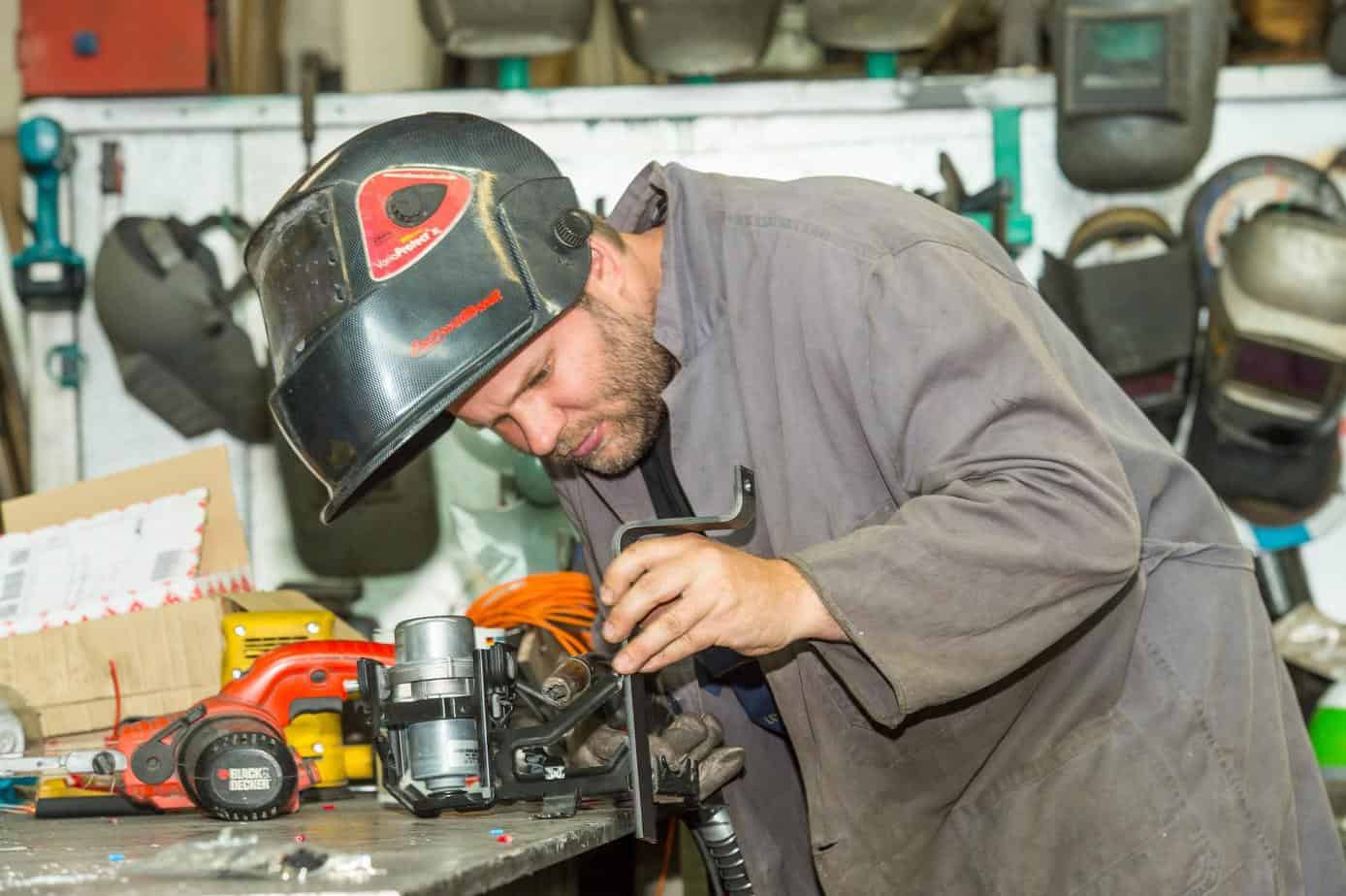 This prototype was build exactly to the customers specifications for the use on his game reserve in Africa and the two new vehicles will be tested in an underground mining operation in Europe.

“This is exactly one of the fields where this electric conversion package really makes sense” explains Robert W. Kranz of Rallyewerk Automotive, who working with Thomas Lermer on this project. “Electric drive offers many advantages in critical environments, e.g. noise or atmospheric. Having a highly off-road capable vehicle with an operation range of approx. 200km is a great improvement of climate control in mining operations, e.g. underground salt mines, but also in operations in game parks and nature reserves, where the noise level emitted by a vehicle is critical to the wild life. 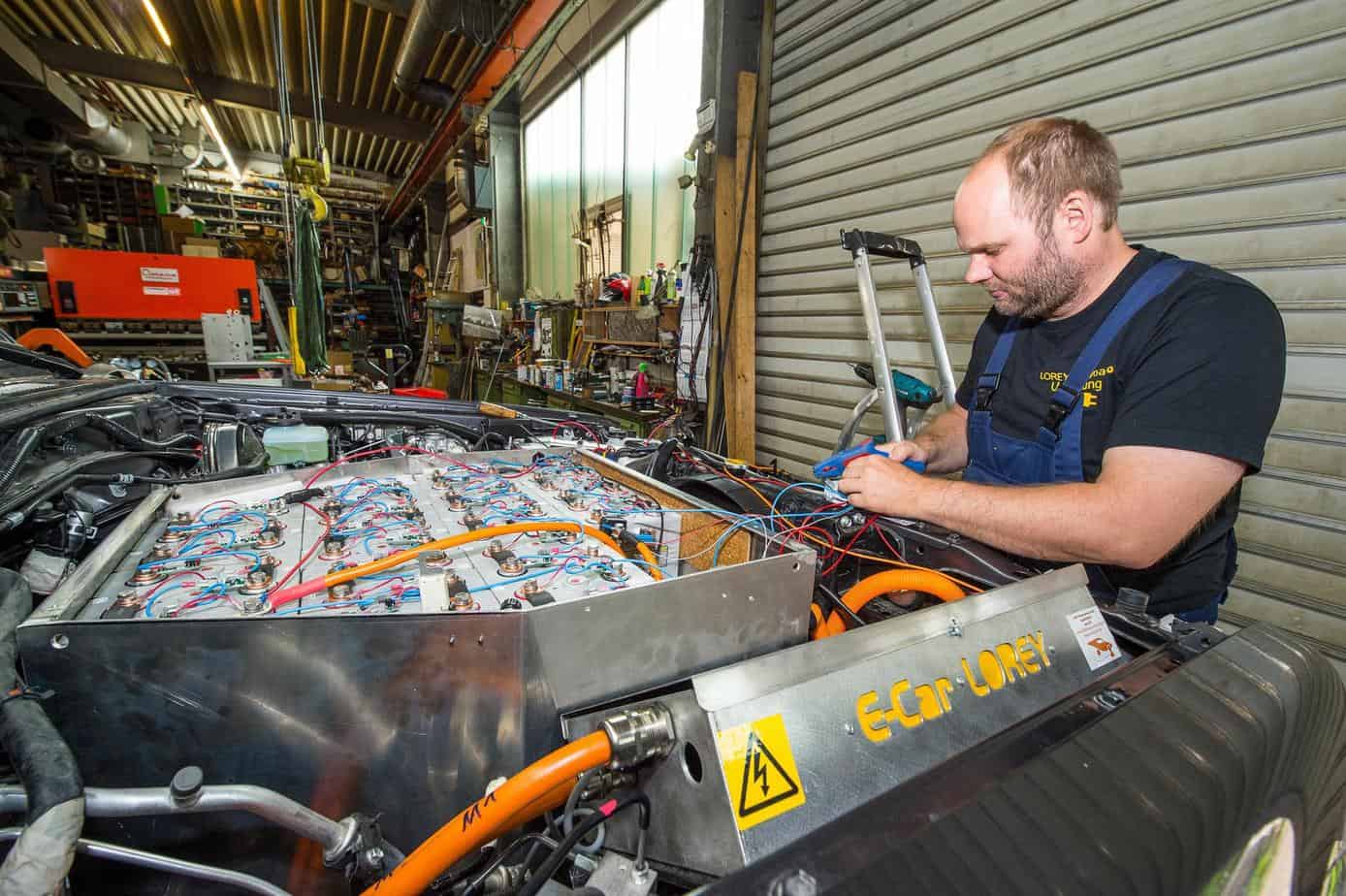 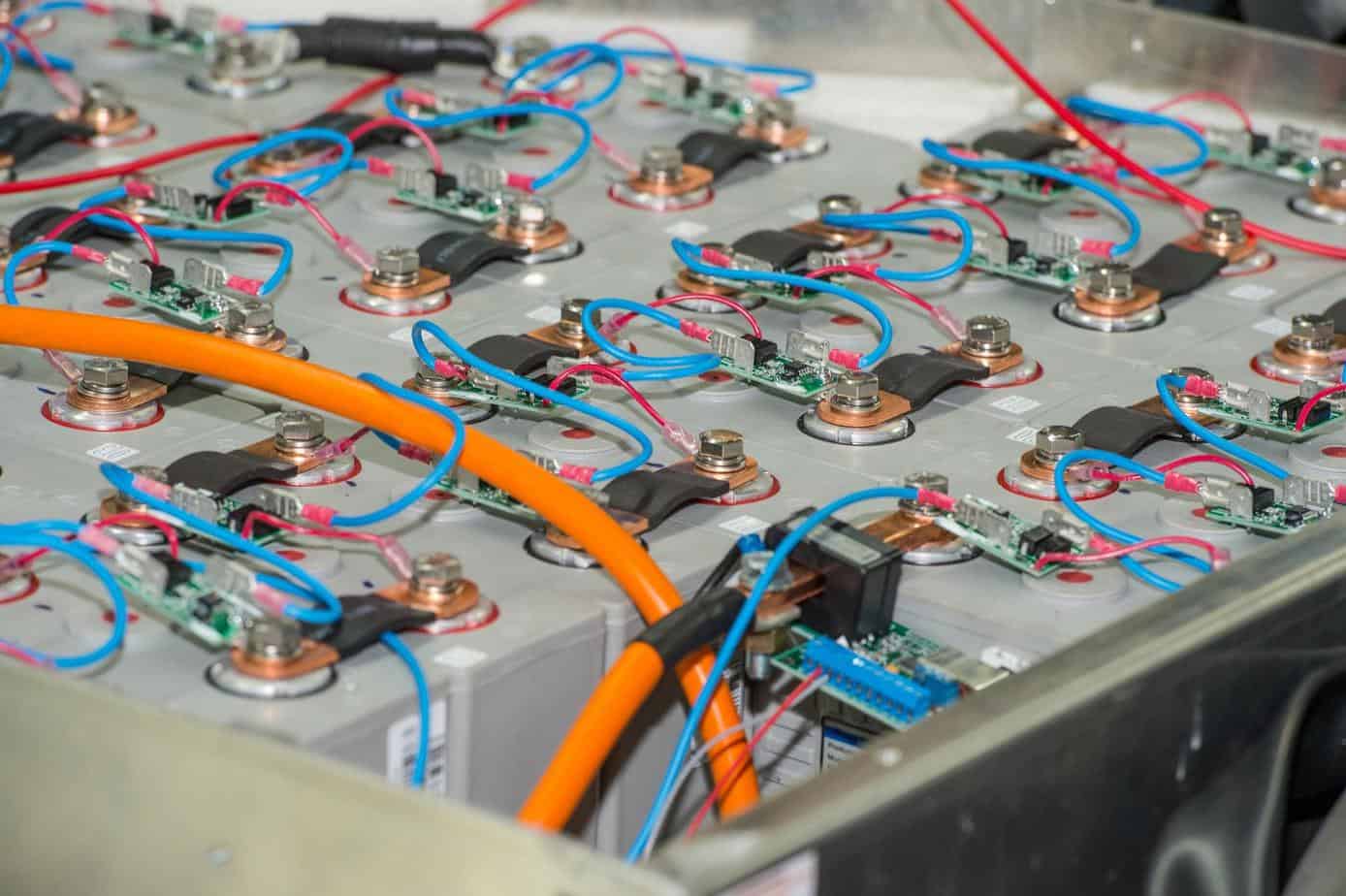 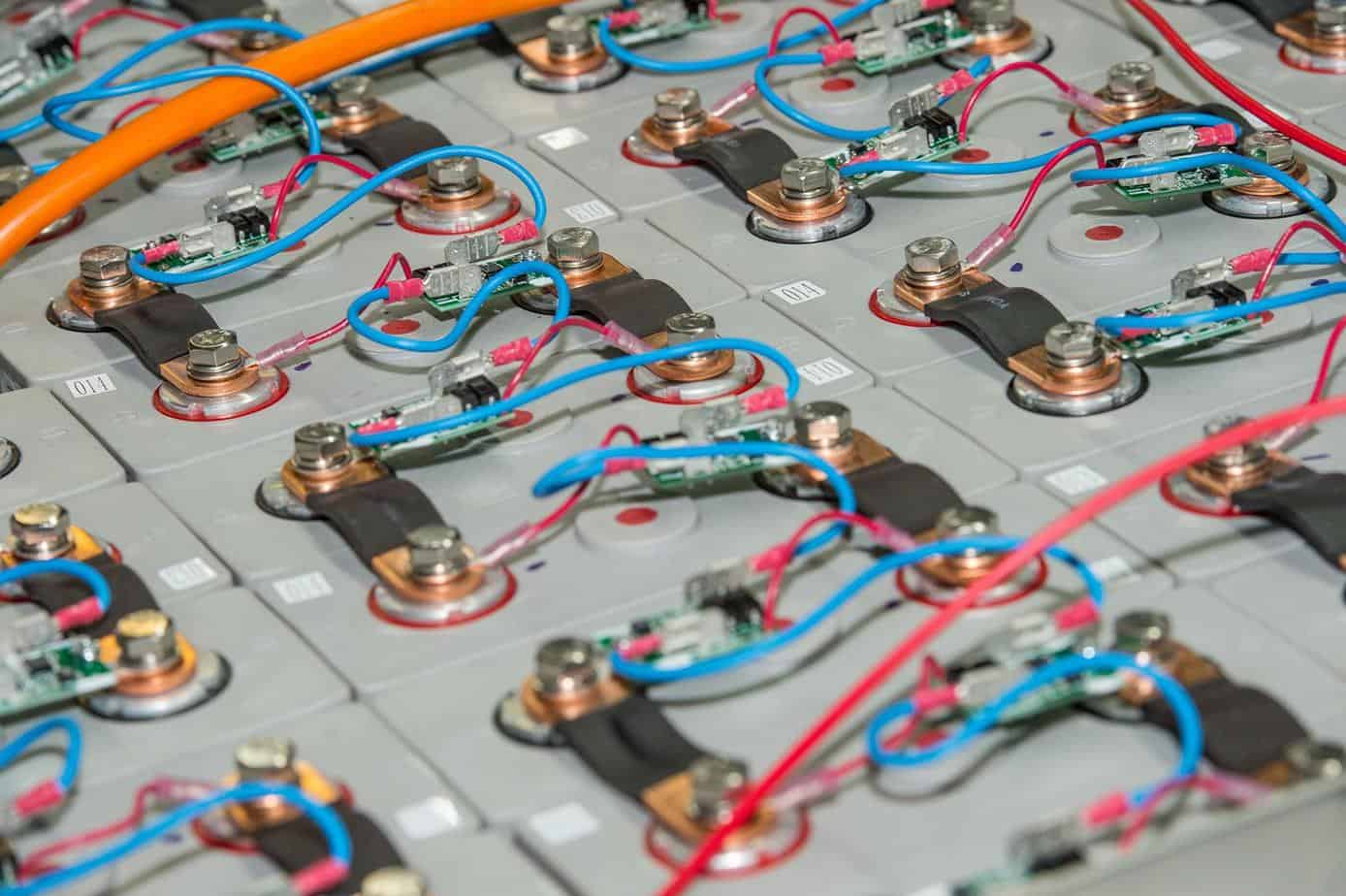 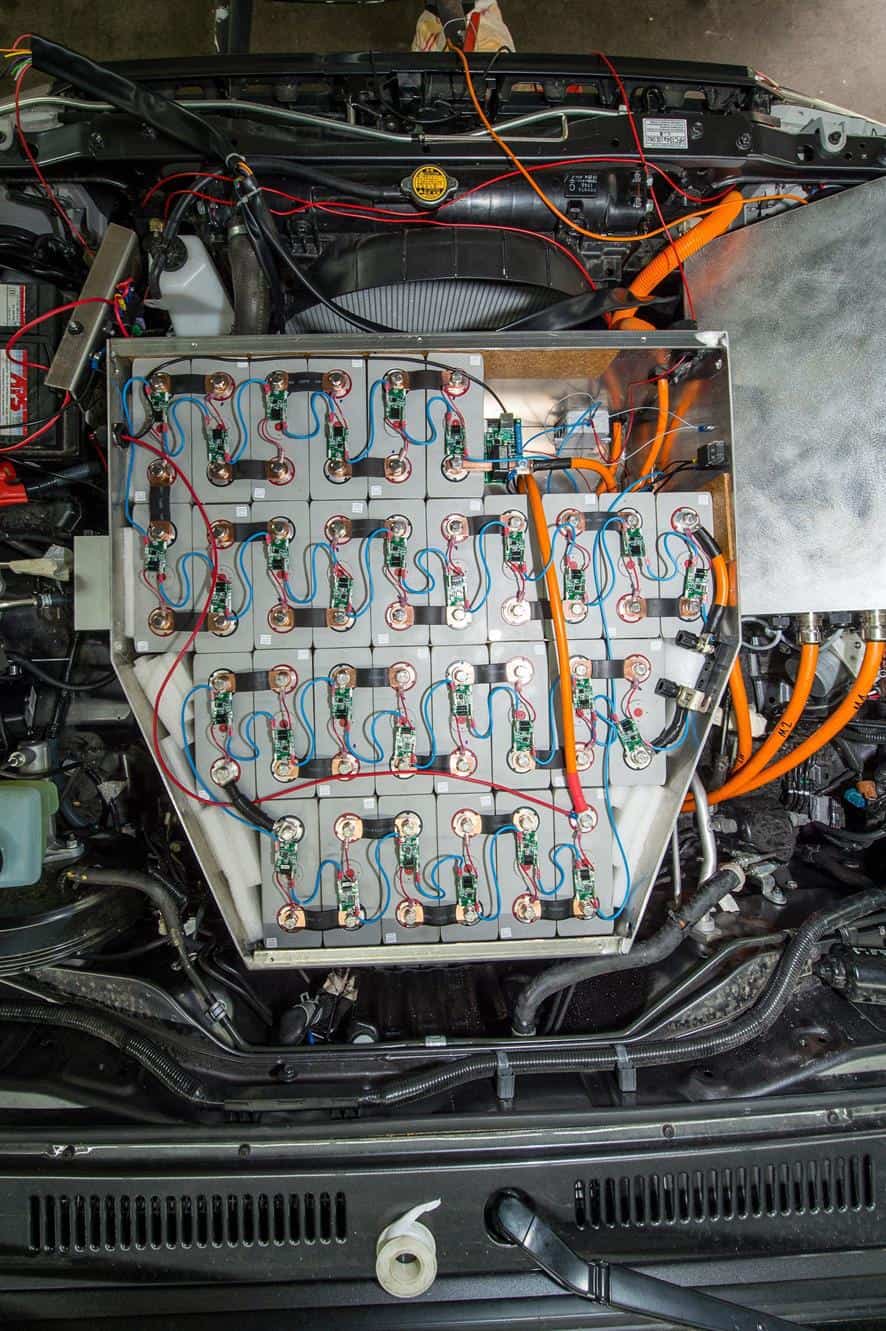 As we come to a little creek in the forest the next question arises. With all the electrics added how does that affect the wading capabilities of the Land Cruiser?
“It doesn’t really, as the customer defines the grade of sealing for all electric components depending on his requirements” explains Thomas Lermer “this prototype, being built for a rather dry environment in Africa doesn’t offer great wading capabilities, but the electric motor and the battery pack(s) can be sealed to IP76 which leaves the question to how long can the passengers breath in the cabin when fully submerged!” 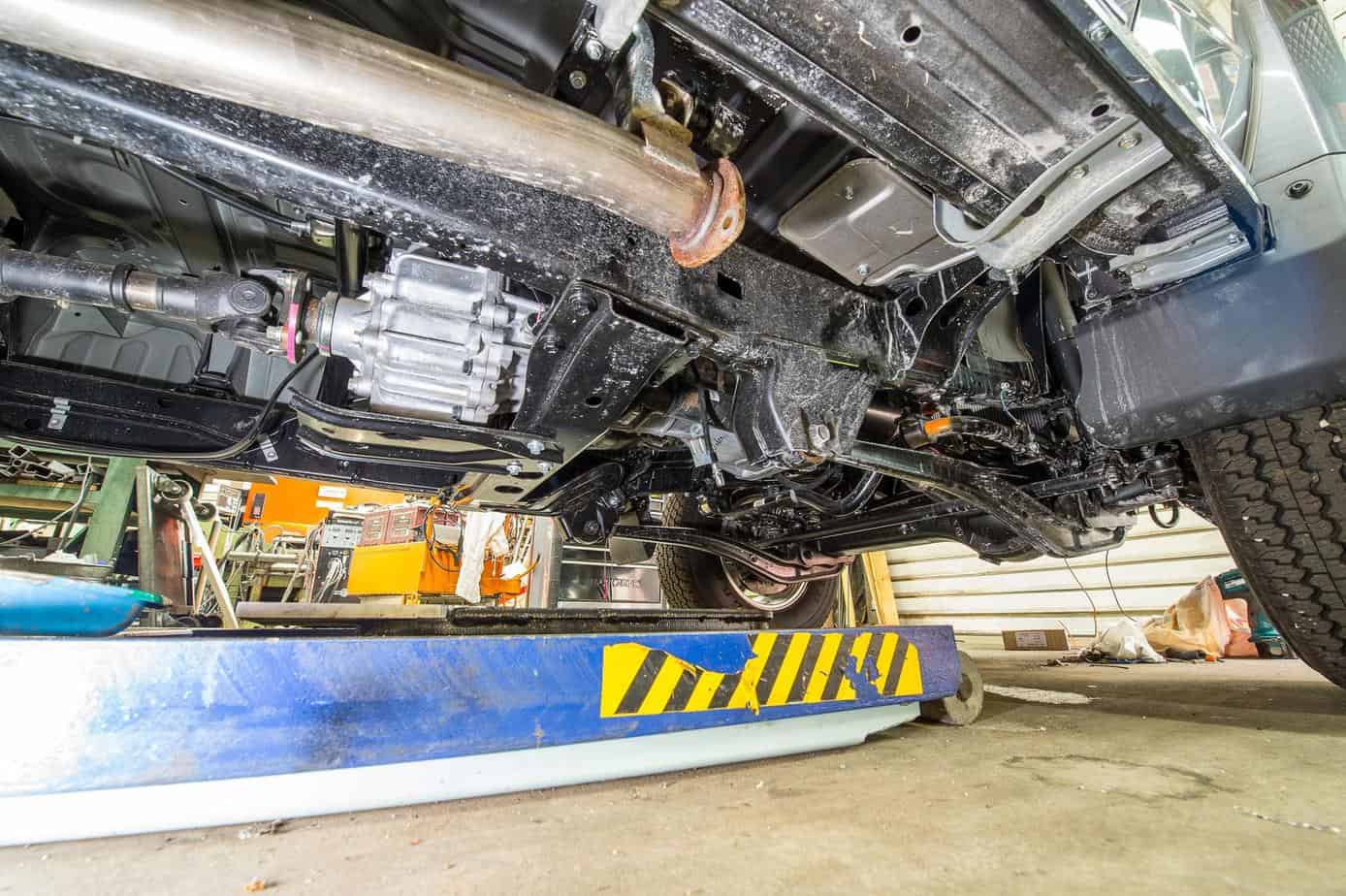 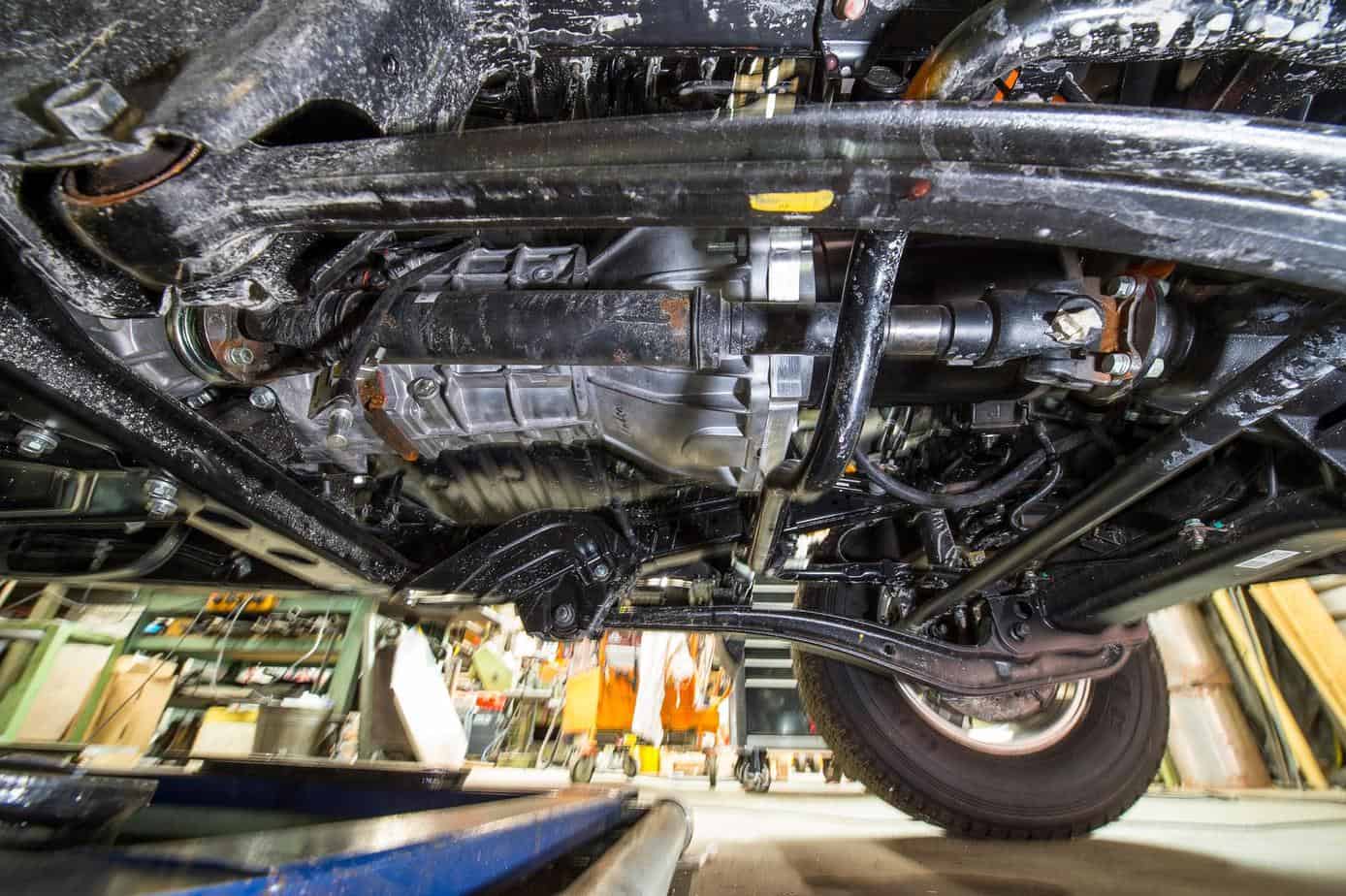 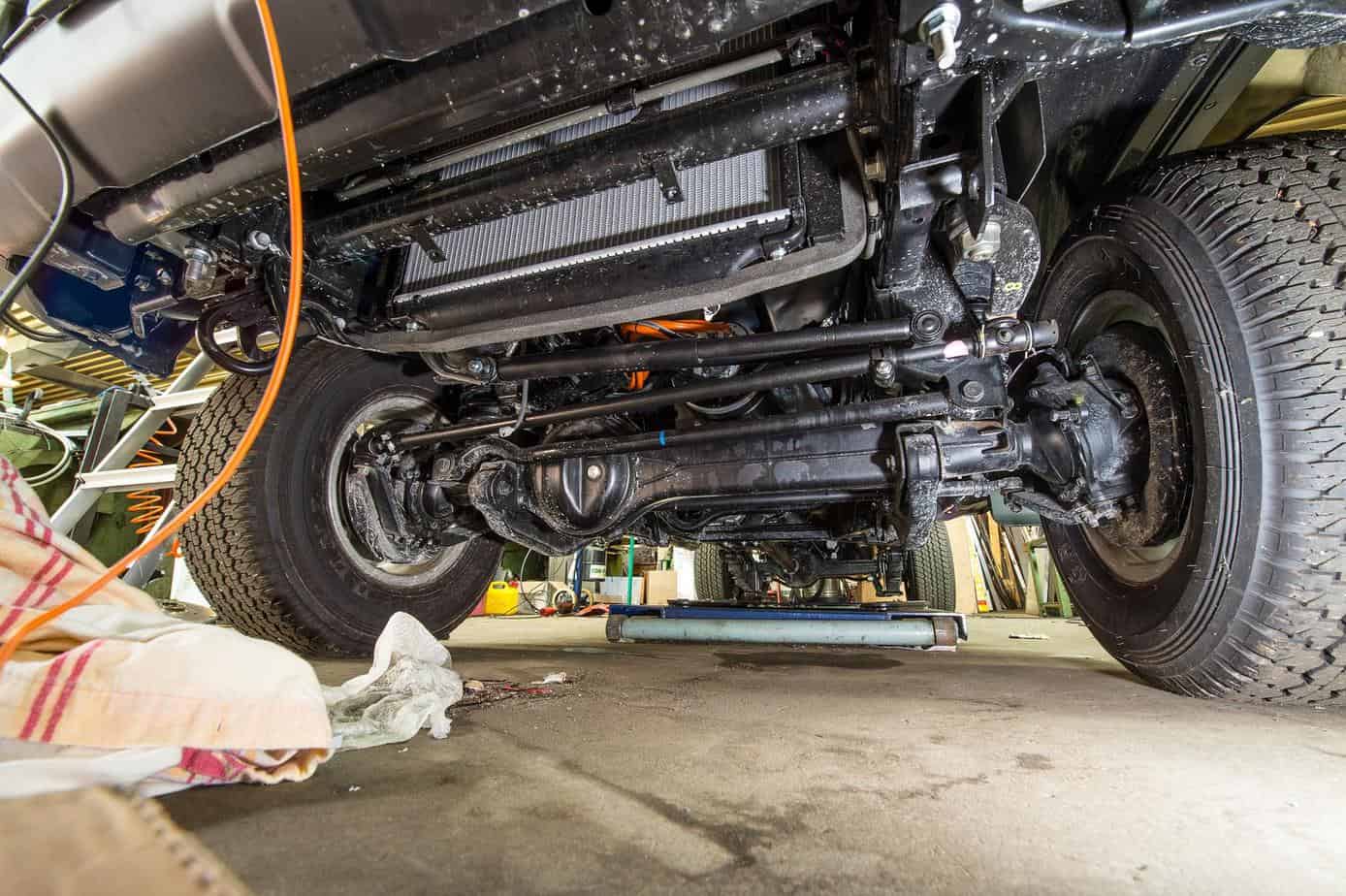 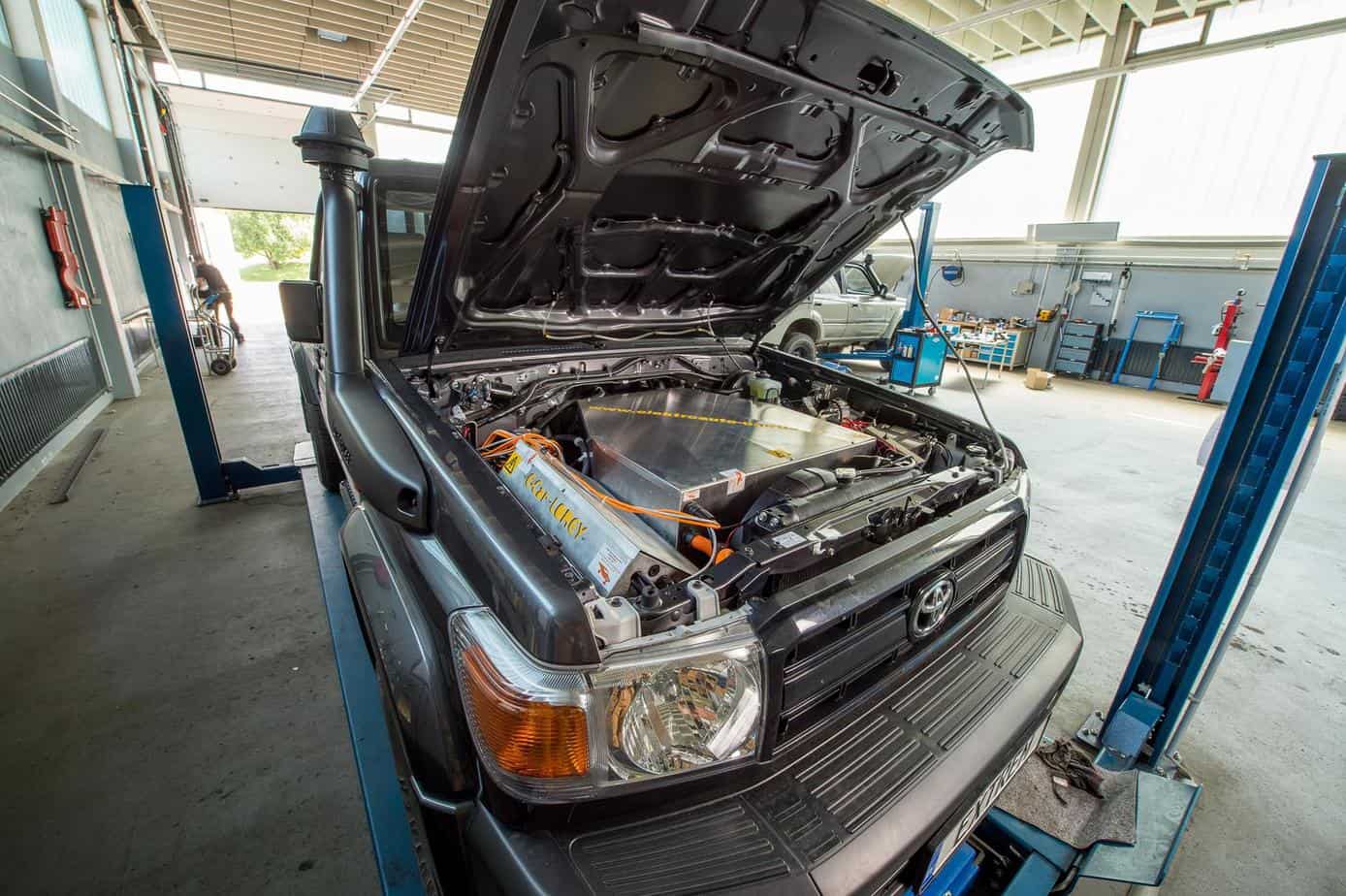 Back at the workshop and a very comfortable drive through the northen parts of the Black Forrest the EJ79 is plugged back into wall socket and recharged. A full regular charge takes about 8hrs per battery pack and 2-2.5hrs on fast charge. For the next two vehicles being built for the mining operation there will be 2 chargers fitted, thus allowing the personnel to charge both battery packs fitted in these trucks simultaneously. 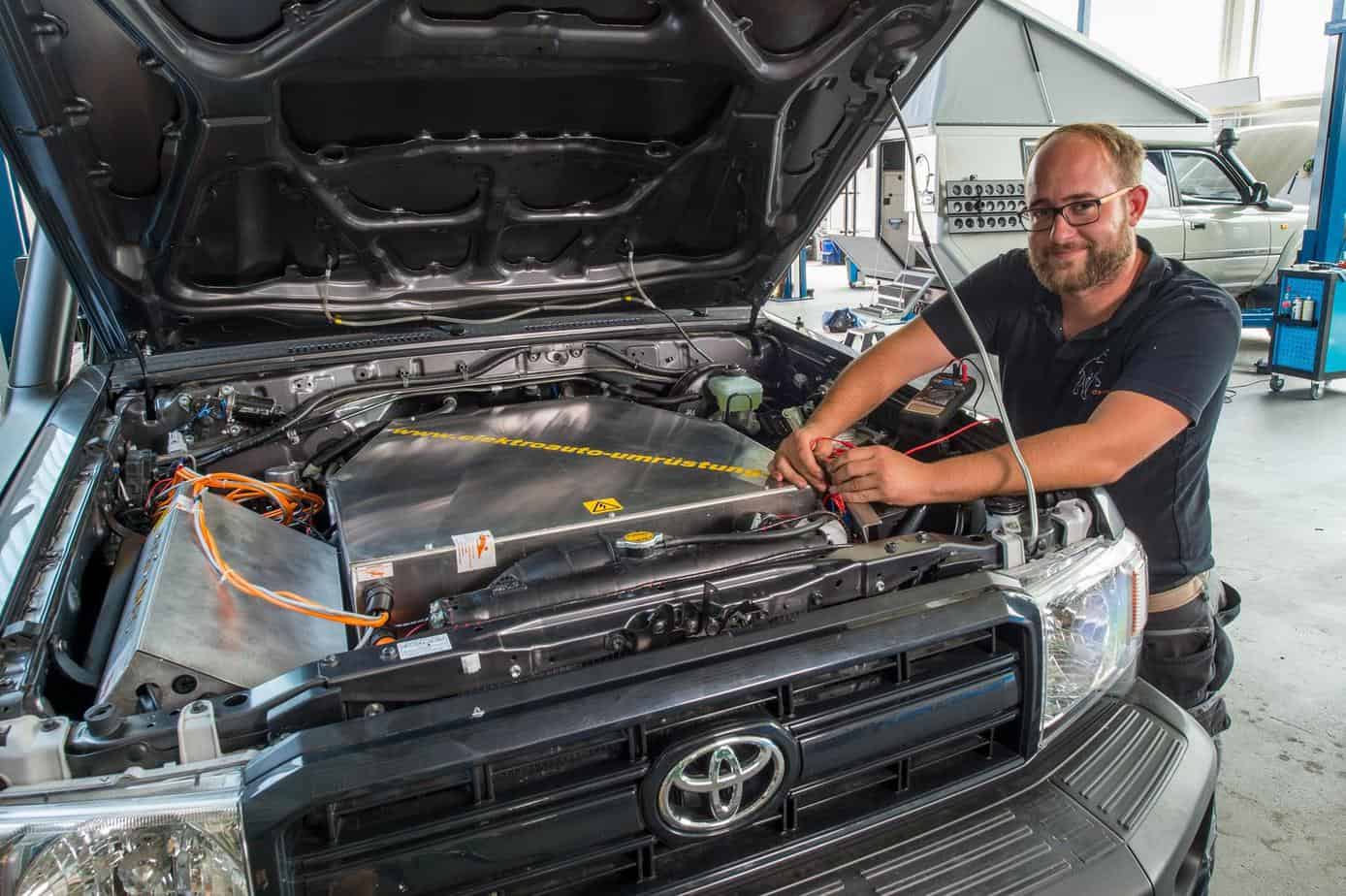 With all this said, does this electric conversion make sense for overlanding? “It actually does,” replies Thomas Lermer, as we can easily fit 3 battery packs into the Pickup and depending on the batteries used we can thus store enough electric power for a range of 350-500km. Charging can be done while driving through Solar Panels or when stationed.” 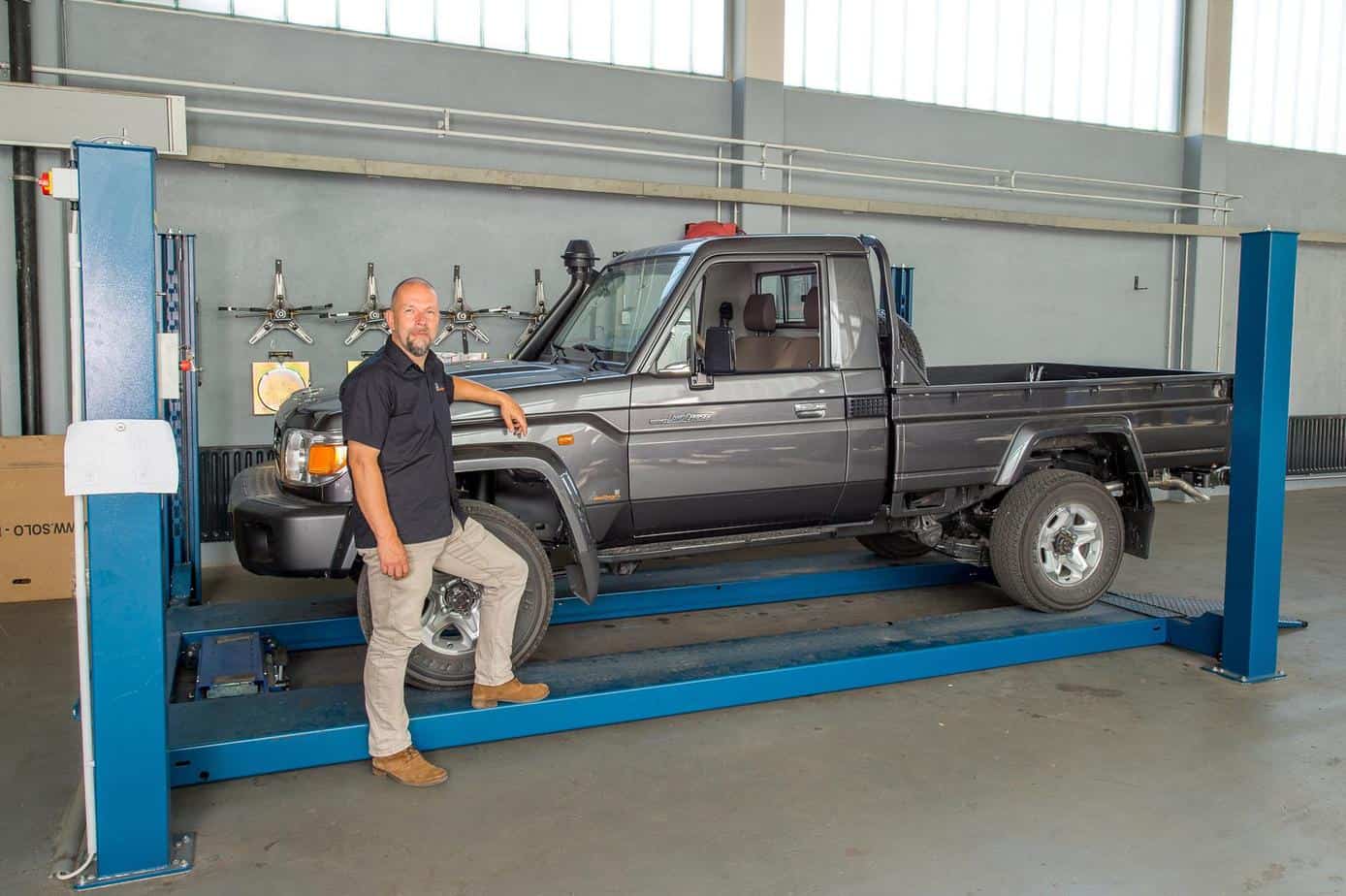 “Actually there are a few inquiries for just these packages” add Robert W. Kranz “one of them being a press team covering the Dakar Rallye in South America. They are planning to use a full electric off-road vehicle as their press car in the Dakar 2017 and recharge their batteries with fold-able solar panels while stationed alongside the track” 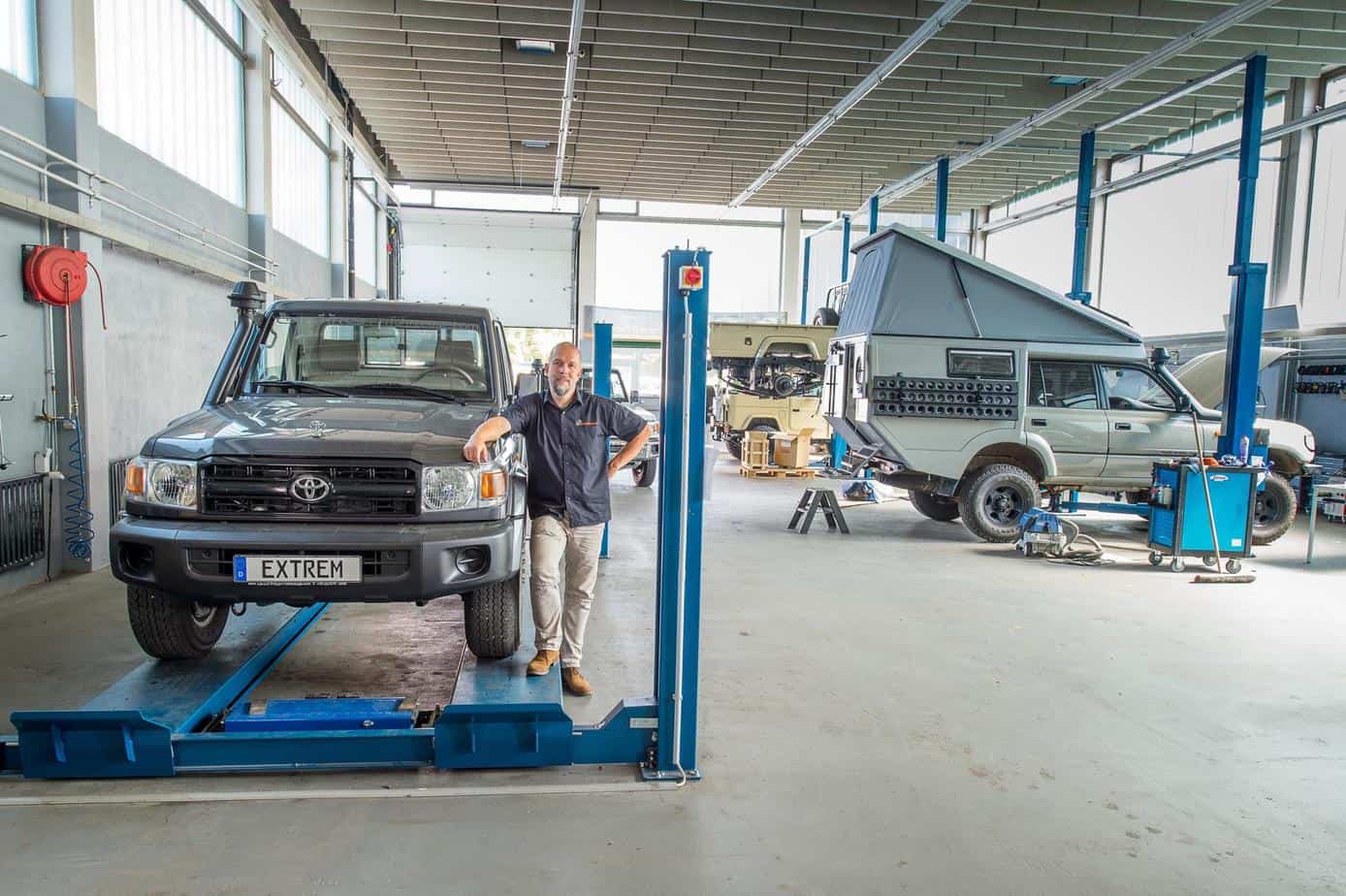 “Another option would be fitting a range-extender” notes Robert “and here one can either use a multi-fuel combustion engine to power a generator or even hydrogen. Unfortunately hydrogen units are still to big for cars, as they still weigh above 120kg and are pretty bulky. So the former, a multi-fuel engine combined with a generator, could extend the range of the EJ79 considerably, e.g. 30 liters of diesel would produce enough electricity for approx. 800-1000km of electric drive” 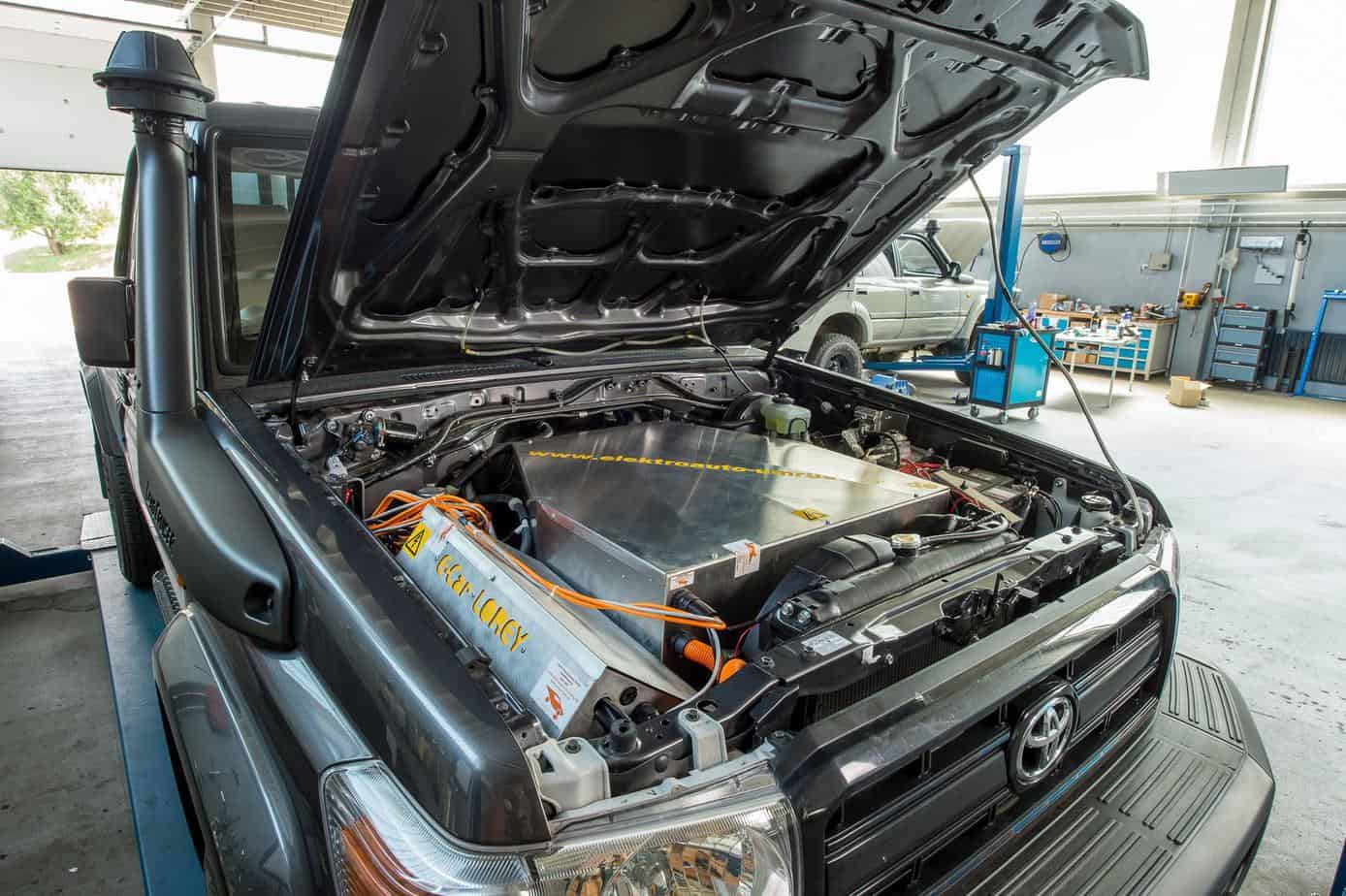 Thomas Lermer adds “the whole package is currently developed for the Toyota Land Cruiser but it can easily be adapted and fit into any other off-road vehicle like the Land Rover Defender, Mercedes G Wagon, Jeep Wrangler, or others. For the moment we focus on ´older´ models that haven´t got too much electronics, thus offering this conversion for example to customers who have old, much loved, vehicles which they can´t drive in the environmental exception zones of many cities anymore.”

Our Resumé: A very promising development and something we´ll watch closely next year. The next vehicle to be build will be fully road legal in Europe and thanks to the use of a 100V system the electrics are fairly simple and safe to operate, too.

Technical Data of the EJ79 Prototype 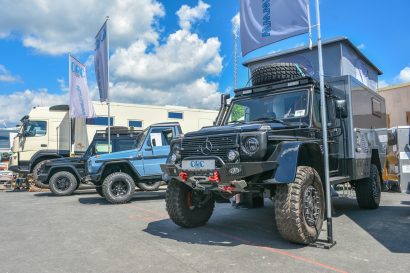 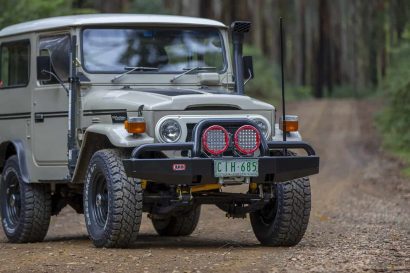 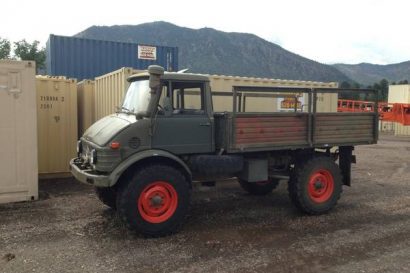