If Mrs. Bell had her way, we would eat Greek yogurt with seeds and nuts and bananas and a small spoon of jelly for breakfast every day. Last night’s dinner was pasta which was actually baby marrow (did she think we would not notice?) with watermelon for dessert. I am forced to drink a gallon of water every half an hour, and the proper beer has been replaced with small quantities of tepid Lite. If I eat one more avocado, it might incite murder. It is time for a revolution! I am a man, and I like to eat macho food, fried in butter, served with salt! Vive la France!

In France, French toast is known as pain perdu (lost bread). The ancient Romans called the ever-popular dish pan dulcis (sweet bread). Back in the day, not too long ago, when bread only lasted a day or two, there were few options for reviving stale bread. Soaking bread slices in a mixture of egg and milk, then frying in butter or oil delivered a delicious meal from potential waste. 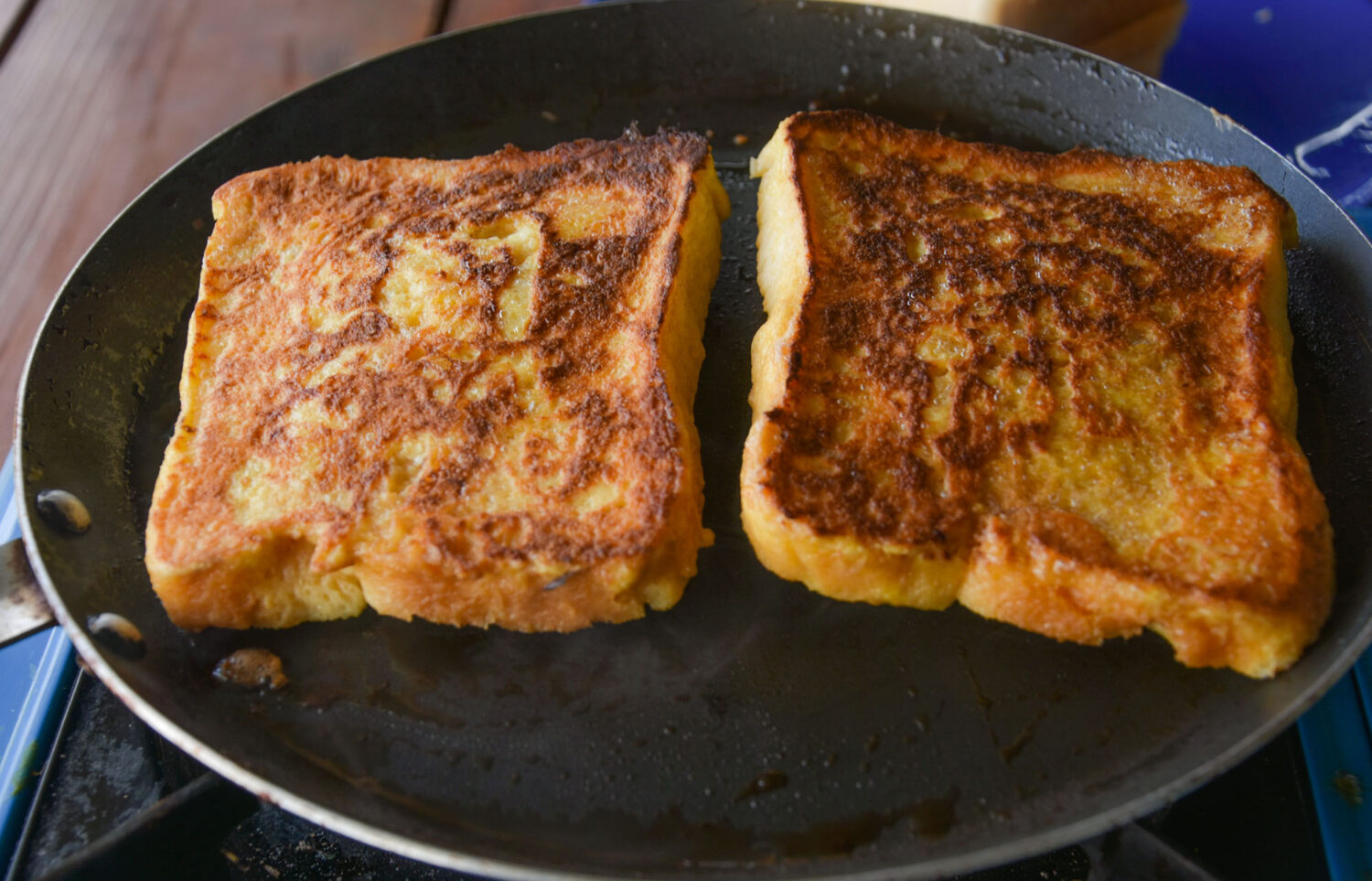 When Mrs. Bell allows the consumption of bread, we try to buy the most natural option available. But that is also the type of bread which is superb fresh out of the oven and less palatable a day later. The only drawback of French toast for a family is that other than the meal not being incredibly healthy, you can usually only make two slices at a time unless you have a large two burner and two large frying pans. Yes, the greatest challenge is making enough, fast enough. We tend to eat French toast on high activity days and before hikes. At a ratio of one egg per slice of bread, a meal of two fried slices is not at all expensive, which pleases the Department of Finance and Taxation no end (Mrs. Bell).

For a grand total of $0.35 (less cooking gas) per slice, a family breakfast for four eating two slices each will cost the grand sum of $2.73. Long-term, long-distance overland travelers count pennies and love a good value meal. But that is a basic slice of buttered French toast. You can take it to the next level by adding strawberries and blueberries, syrup and cream cheese, bacon and syrup, figs and goat cheese, banana and dark chocolate, cinnamon, etc. We don’t. The boys have their slices with fat blobs of salted butter, and the girls eat theirs with maple syrup—simple.

To make perfect French toast, you will need: 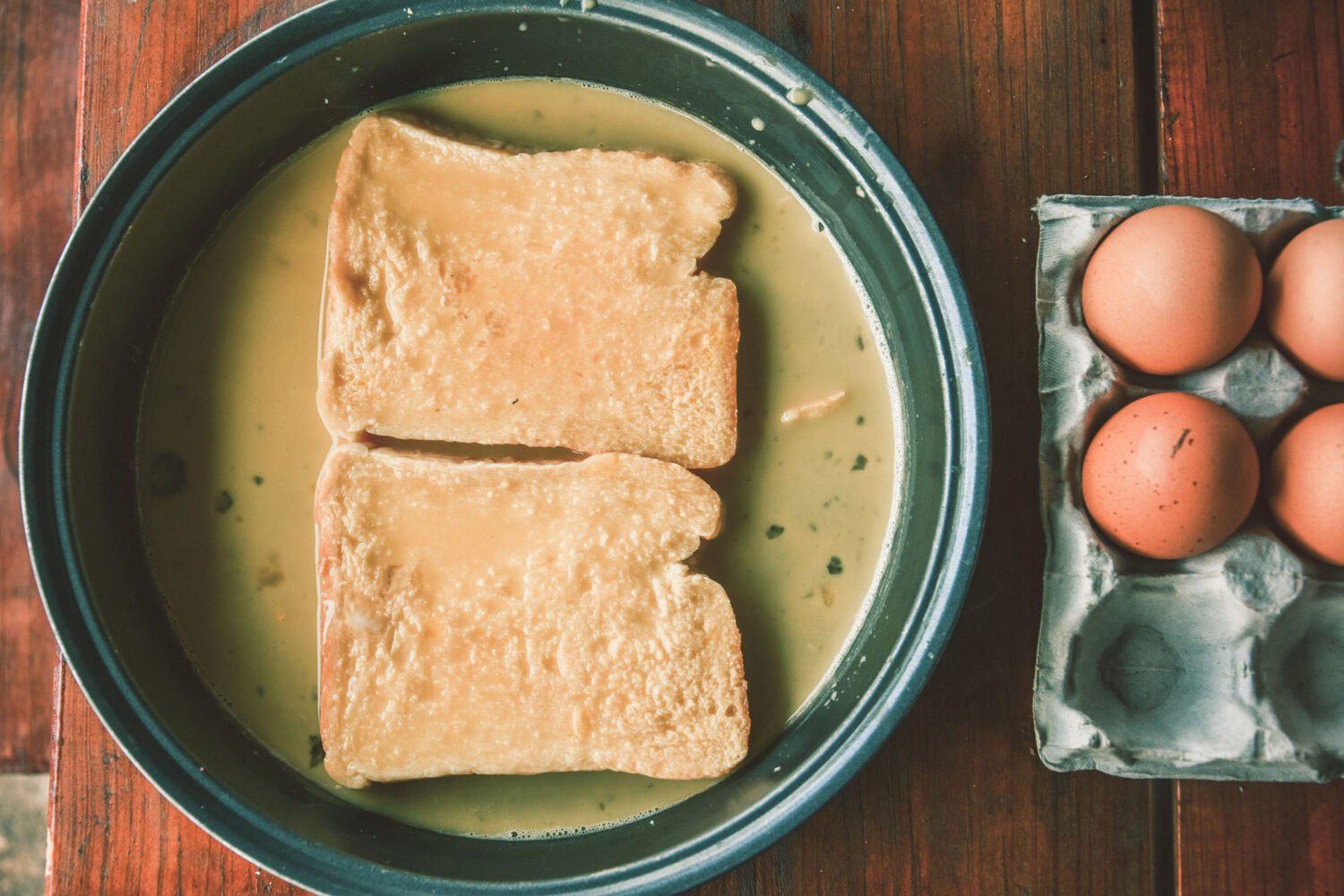 When ready, either put to one side while you prepare the second batch or serve in stages, most ravenous first, usually the male child or SWAMBO (She Who Always Must Be Obeyed). Or feed yourself first, a good excuse to check the flavor. Allow the pan to cool between batches. Serve with optional toppings. 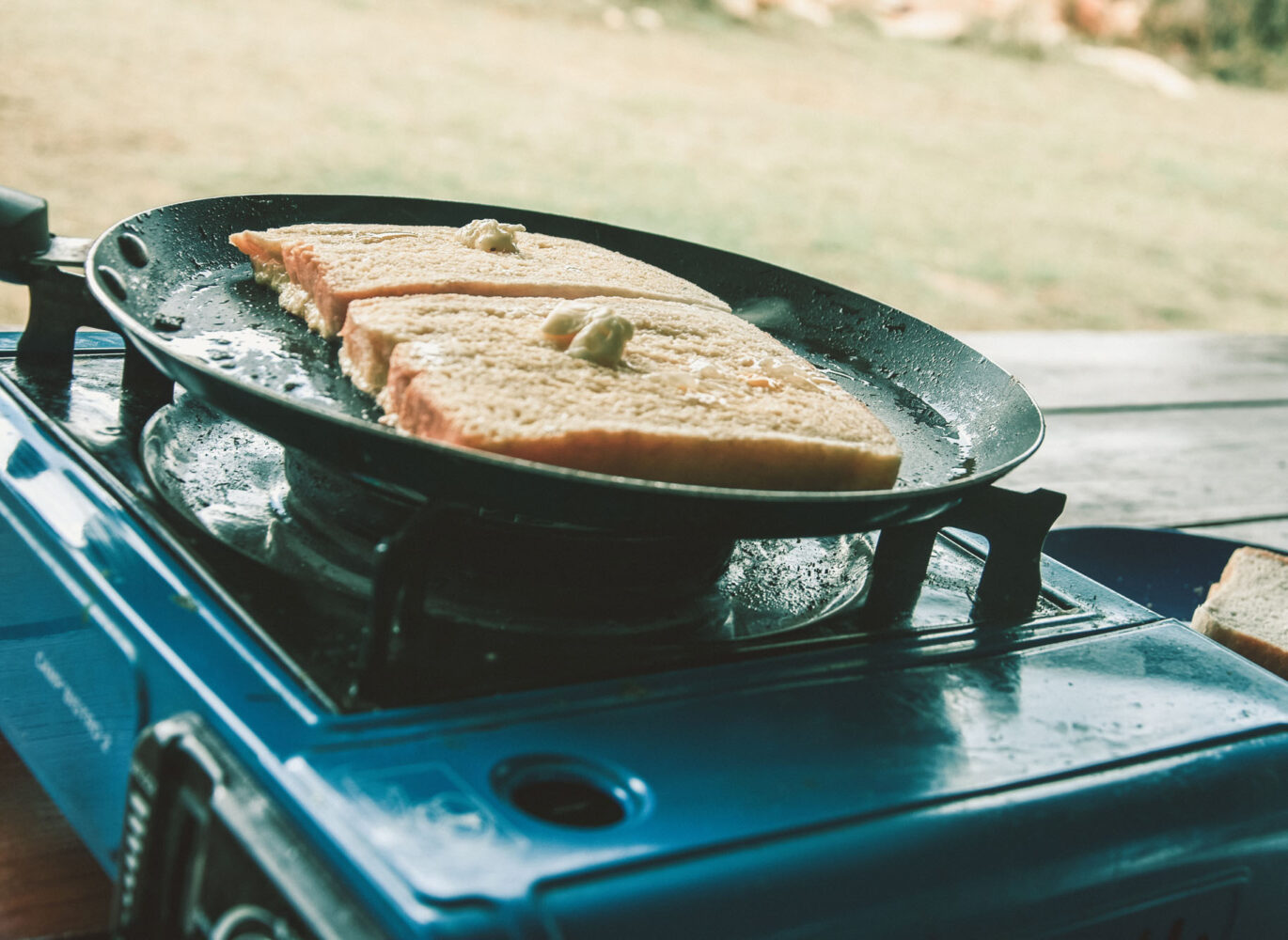 Bear in mind that you will smell delicious the entire day. You can limit the number of dishes the ravenous male child has to wash by serving in stages using one plate repetitively, using one dish as the mixing and soaking dish, and one non-stick frying pan. We carry a light and inexpensive pancake pan that works perfectly.

So, liberate yourself from the campsite rabbit food and enjoy a slice of delicious history!