Not every story has a happy ending, and the woeful saga of the Indian made Mahindra pickup bound for American shores is as protracted and desperate as a Bollywood drama. How a plucky little truck became a tale of automotive heartbreak began more than seven years ago with a string of tantalizing press releases and the promise of a 30+ mpg compact diesel truck in America.

The first media reports in early 2006 through 2008 were ever so exciting and even included the possibility of a diesel hybrid Mahindra with estimated fuel efficiency reaching into the upper 40’s. There was teasing talk of importing Mahindra’s snazzy Scorpio SUV, also powered by a small diesel engine. It all sounded too good to be true, and as the plot unfolded, it was apparent serious challenges lay ahead. 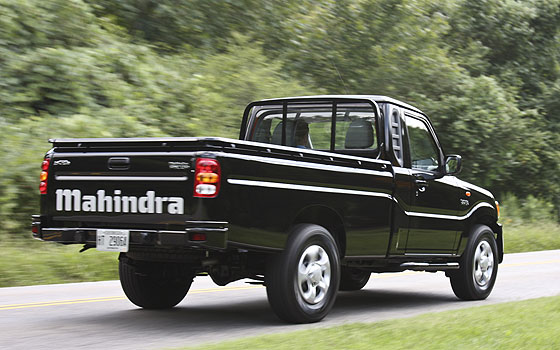 By 2009, despite minor setbacks like the crash of the global economy, pieces were falling into place and things appeared to be on track. Atlanta based Global Vehicles had assumed the roll as the sole American importer for Mahindra trucks and quickly signed up more than 350 dealers across the country. As things rolled forward, they took samples of their trucks to the E.P.A. for emissions testing, and things started to go pear shaped. Delays ensued and the year passed with little hope of seeing any trucks within the 2010 model year. The likelihood of seeing the diesel hybrid or SUV were quashed completely, never to be mentioned again. This is when things got interesting with the inclusion of the Chicken Tax. Yes, you read that correctly.

In 1963, in retaliation for a European tax imposed on U.S. raised chickens, Washington’s finest passed a 25% tariff on all foreign-made pickups. As Mahindra and Global Vehicles did their best to navigate the automotive lobby in a desperate attempt to retain their low price advantage, time continued to drag on. Meanwhile the E.P.A. was not making things easy for the little diesels and getting them ready for market was looking bleak. Then came the death blow.

In the latter months of 2010, Mahindra executives decided it was time to kill the deal. Claiming the contract had expired, they simply walked away leaving Global CEO, John Perez faced with 350 invested dealerships and no trucks to sell. Enter the next cast of players, the litigators. As fast as lawsuits could be filed, gavels fell, and the story was no longer about 2.2 liter engines or 5,000 pound towing capacities. This was a full blown legal drama with the slighted dealers claiming Mahindra never intended to sell in America, and used the entire charade as a means of gaining critical intel on the inner workings of the American automotive market. As of this spring, Judge Thomas Thrash cast a critical verdict allowing five would-be Mahindra dealerships the ability to pursue litigation against Mahindra of India. Even if they win, it will be a shallow victory.

As the final chapter is written by the attorneys, Mahindra trucks trundle on, just not on American soil. Available in other markets, these unassuming trucks sell for low sums and have more than lived up to their boastful durability and efficiency claims. It could have turned out so much better, but not all stories do.