I was told several times––not to go. Baja they said, is a place of many dangers and to visit there is a fool’s errand, reckless at best. Seldom one to heed hyperbolic warnings, I quickly dismissed reports of kidnappings, shakedowns, and horrifying accounts of gastrointestinal distress. Instead, I resigned myself to the notion that somewhere between the fear mongering and blind optimism, the truth of Baja would be found. This is not to say I didn’t construct my own list of theoretical hazards and as the wheels of my motorcycle churned ever closer to the border crossing at Lukeville, I began to catalog those potential pitfalls. Would we miss our weather window and the spring-like temperatures in the forecast? Would the beers be as cold and the fish tacos as delicious as promised? Would my high school Spanish break through the communication barrier? I had so many pressing and imposing worries.

Our trip to Baja began as a casual sortie, a means of severing the tethers that bind us to computer screens and mobile phones. Few things are as liberating as seeing “no service” on an iPhone, and I for one relished the moment when those tiny little words first appeared. A small group of four, we made quick work of the first hours from Prescott to the border, opting to take scenic roads where possible. Our leader, Scott Brady, had designed a beautiful route, a patchwork of small roads seemingly crafted just for two wheels. Rolling through the verdant farmlands just south of the border, our trajectory placed us at a solitary confluence where the day’s waning light met with the craggy peaks on the edge of the Altar desert. It was here all of the unforeseen dangers of Baja began to befall us, one by one. 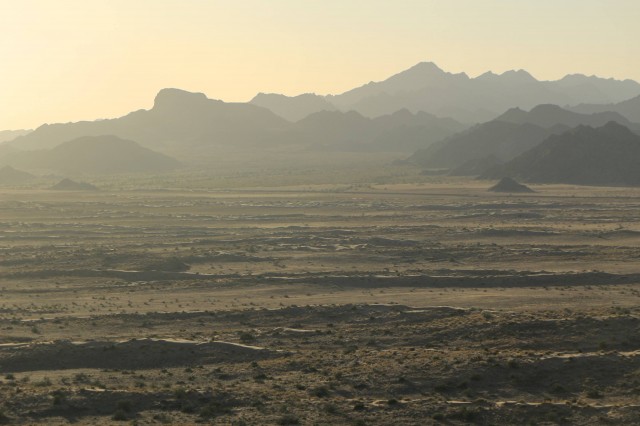 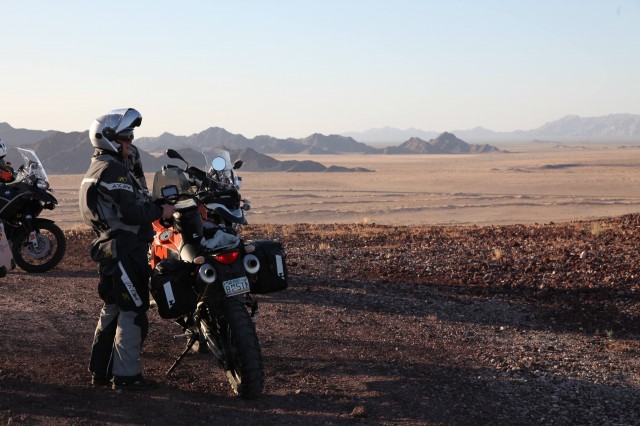 As our first day came to a close, we found ourselves in complete isolation, tiny figures in a vast and enveloping landscape. The Altar desert is a stunning place, otherworldly in its contrasts. Shifting dunes flank rocky escarpments and lush arroyos bisect what appear to be lifeless voids. Around us in all directions, the ground was pocked with holes, homes to mysterious creatures we would only see in fleeting glances. With the sun quickly abandoning our adventure we pitched our tents and settled in for a night under the stars, the moon casting an etherial glow over our camp. Solitude proved to be nothing to fear. 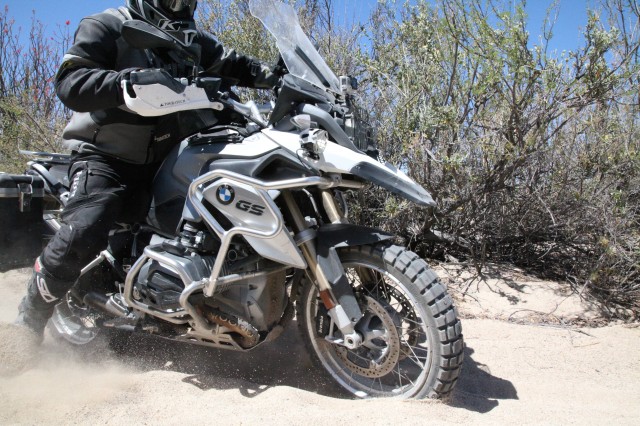 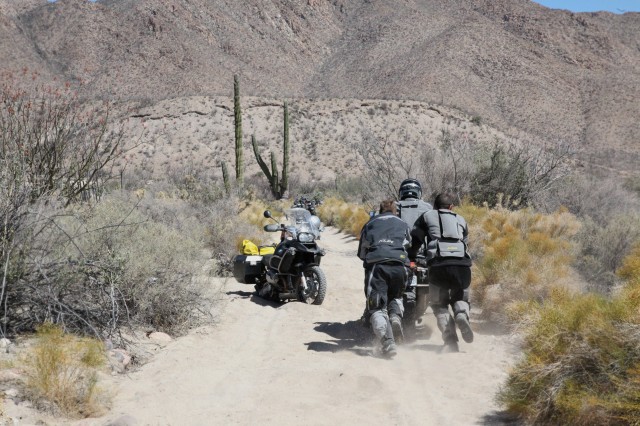 Within ten minutes of turning off the pavement we came face to face with one of Baja’s most infamous challenges––sand. To the adventure motorcycle rider, sand is either a welcome sparring partner or a nerve racking nemesis. Not new to motorcycles by any means, I am nonetheless a wet-eared newb to riding in sand. Knowing it was going to be big trouble, I sized up my first stretch of sand with my enthusiasm meter reading…dead zero. Realizing it was of no use staring at it like a hypnotized chicken, I rolled onto the throttle, gathered precious momentum, and promptly flopped on my side, a scenario I’d repeat many times over. But, as the days progressed, and with many tips from my cohorts, my sand-charming skills would drastically improve. By week’s end, sand would cause no ills, not that it ever did for Scott, Brian, and James. For them the sand was a minor nuisance, hardly something to be feared. 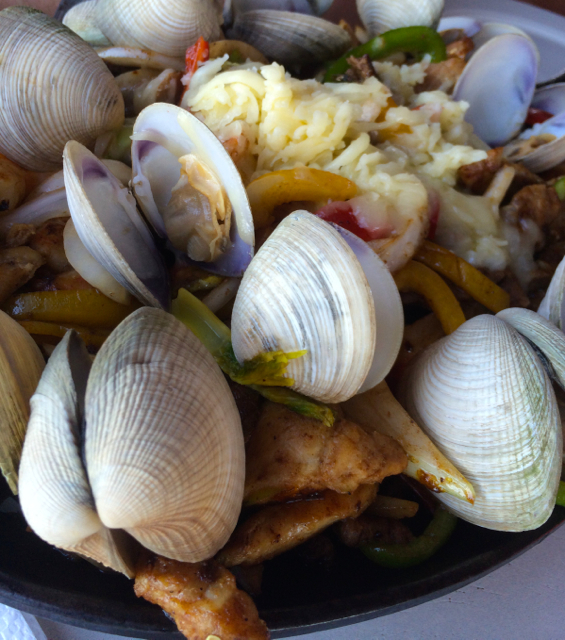 The food of Mexico has long endured a duplicitous reputation. To some it is a vibrant collage of flavors and textures, the product of recipes handed down for generations. For others, a tortilla is tantamount to a petri dish, a saucer of death on which an army of bacteria are delivered to the gullet. Death be damned, if it looks good, I’m eating it, and that cavalier attitude served me well. Over the course of a week, our ravenous crew missed but one meal. In retrospect, the week was a dizzying cavalcade of fish tacos, huevos rancheros, frijoles, tortillas, e mas. The fire roasted chicken we encountered on day two was so succulent and flavorful, we hit the same spot on the return trip. How could we not. Roasted chicken, fresh jalapeños and cold Fanta to wash it down. Such a simple meal, it betrayed every high-dollar dinner I had ever paid for. Four hungry dudes all fed for $18.

If there is a culinary highlight to our adventure it was without question the entire experience had in Bahia de Los Angeles at the Hotel Costa del Sol. Arriving at sunset after a long day on the dirt, we rode into their courtyard and before any of us could remove our helmets, a bright faced young woman was asking us if we’d prefer a cold beer or a margarita. My high school Spanish quickly kicked in and my response was an immaculately fluent, if not a little confusing, “Si!” Probably sensing potential trouble she brought me just a beer. Smart lady. Those cocktails made a refreshing compliment to the garlic and butter poached halibut, shrimp, and scallops that comprised our main course. The takeaway––be not afraid of the food of Baja. 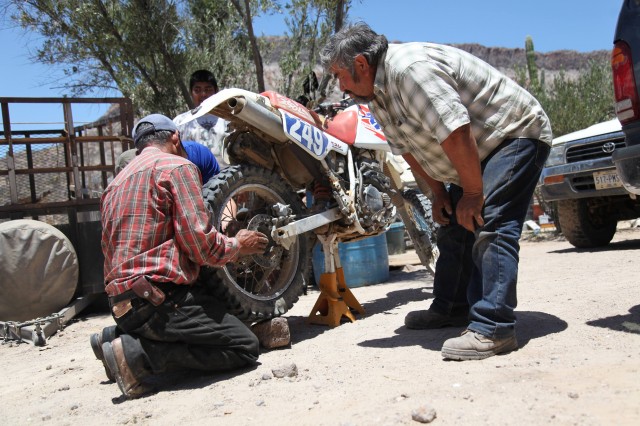 We were able to help one of the locals with the simple gesture of a spare tube. It’s the little things in Baja that make all the difference. 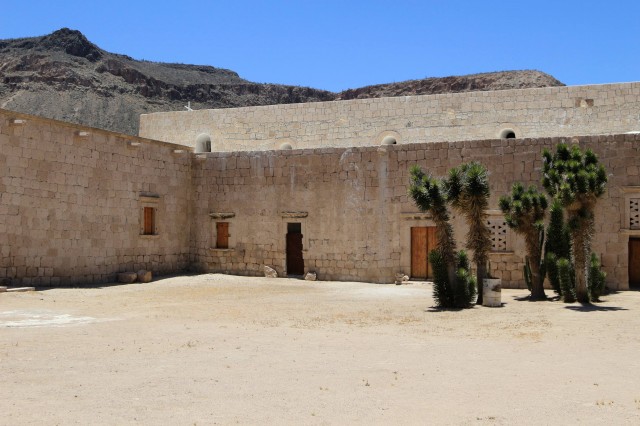 Mission San Borja was built in the late 1700s and stands today as a proud monument to the region’s rich history. 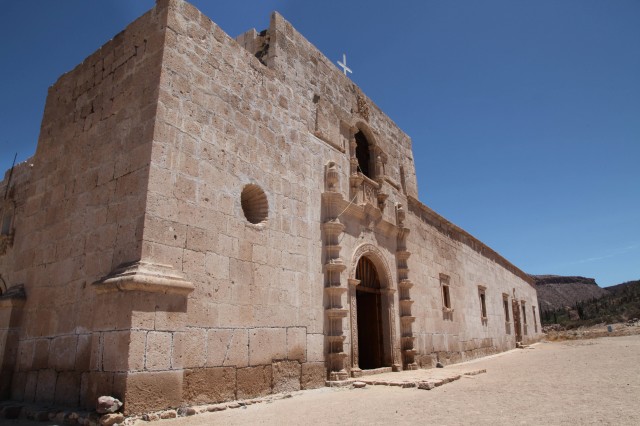 If there was one singular element that suppressed any concerns of safety in Baja, it would be the collective hospitality of its people. There is a warmth to the people of Baja that is demonstrated in every interaction. From the checkpoint guards eager to chat about our motorcycles, to the charming restaurant owners serving meals from their home kitchens, there is a humility to the people of Baja that is infectious, even envious. Simplicity defines life in Baja, something we could all better master. Do nefarious individuals penetrate the idillic backdrops of Baja? I’m aware some do, but using our trip to isolate a sample-set, we encountered nothing but happy people anxious to share in the splendors of their homeland. 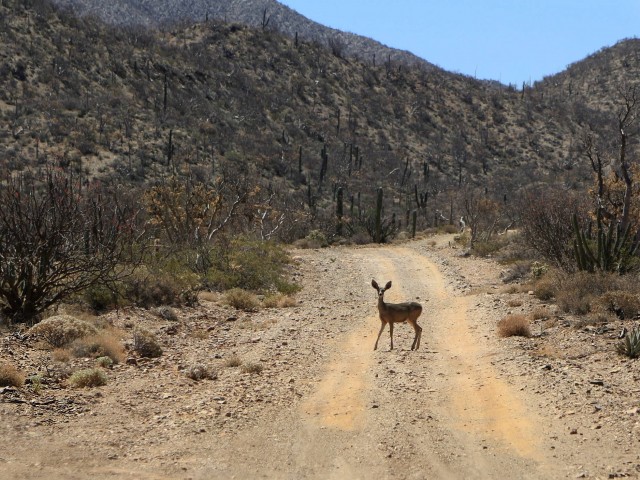 If there is something to fear in Baja it is the rapid passing of time. Our week, one not squandered, went all too quickly. Six days after it all began, we pointed our machines northward for the long journey home. As we floated down the highway, our motorcycles droning on under the fading light of day, I began to reflect on those who cautioned me against going to Baja. Their unfounded exhortations of the peril to the south were by now reduced to punchlines. The danger in Baja is in the not going.

Carving the final turns into Prescott, our headlights piercing the dark of night, I took another mental inventory, this time of the souvenirs I brought home. On my riding suit, the dust of sands conquered. In my tank bag, three seashells for my wife’s collection. There was the sunburn on my neck and the memories of stories told amidst tilted beers. There is plenty to fear in life. Many of those fears will wear teeth and demand validation. Fears of Baja? I have none. 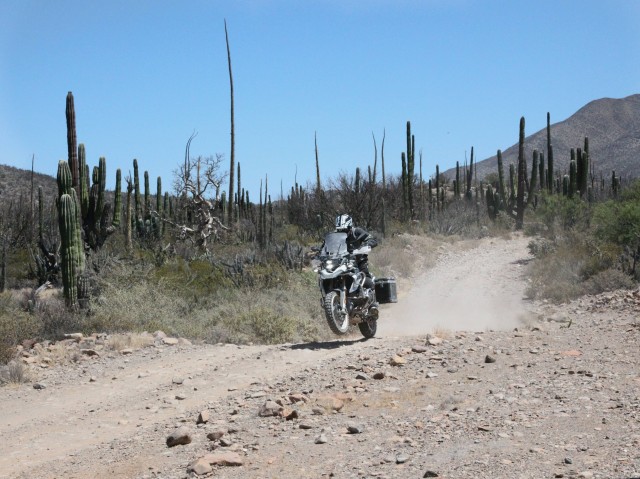 Every group needs a hooligan. Scott Brady was ours. 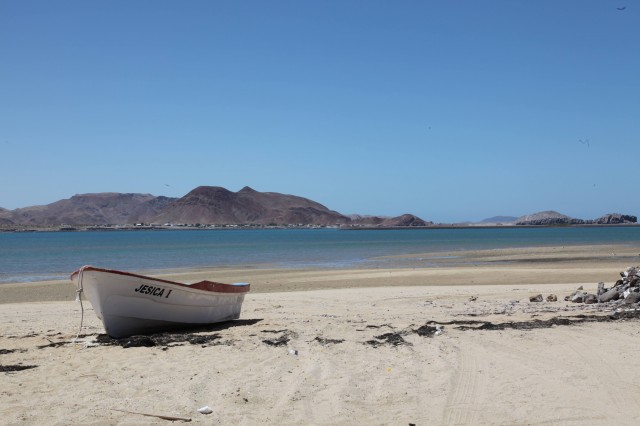 The beach life in Baja is intoxicating. A beer and a beach chair and you may never return home. 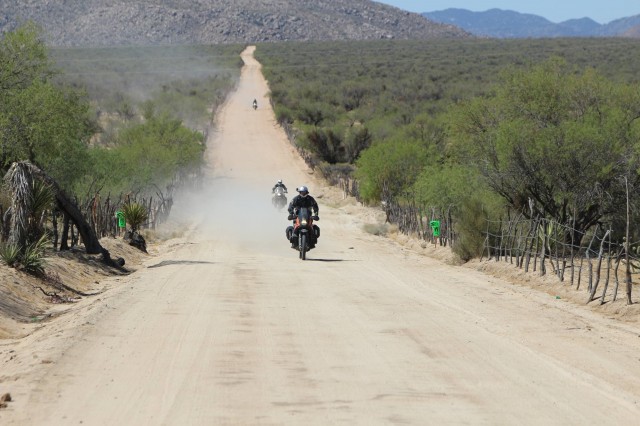 The riding was spectacular and a perfect way to visit the more remote locations of northern Baja. 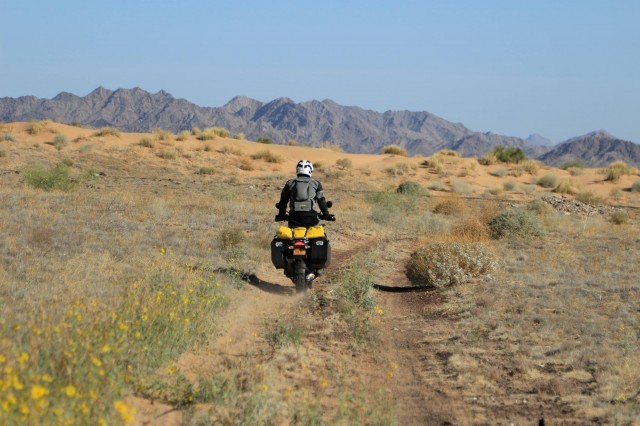 The edge of the Altar is a beautiful interface between rock and sand. 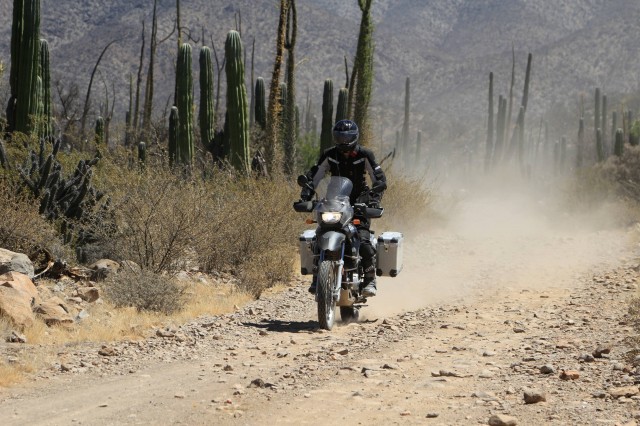 The density of cactus in the interior of Baja is only surpassed by the diversity of species. 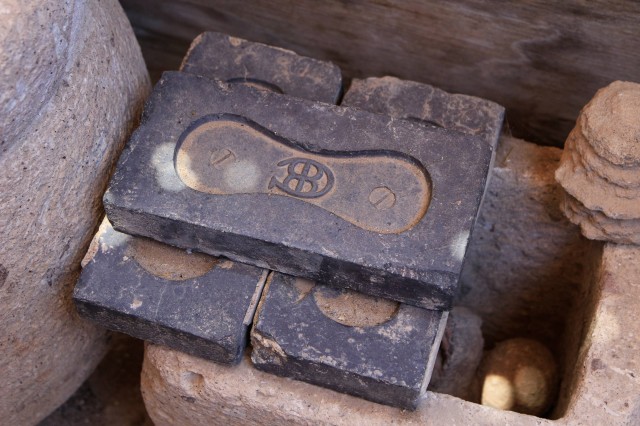 Mission San Borja was once an active mine site. The molds for Spanish gold bars are still in immaculate condition. 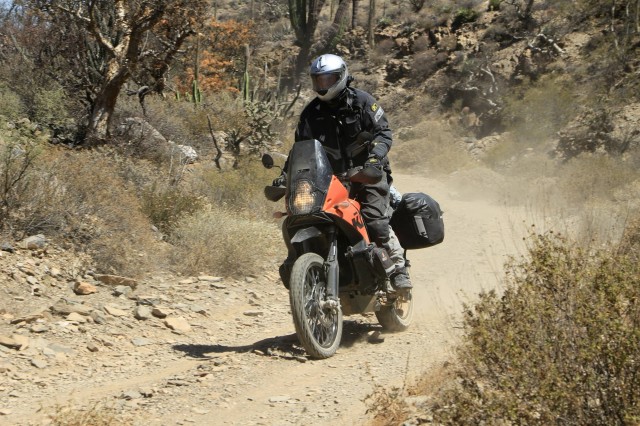 Overland International’s Brian McVickers won many a fan with his iconic orange KTM. 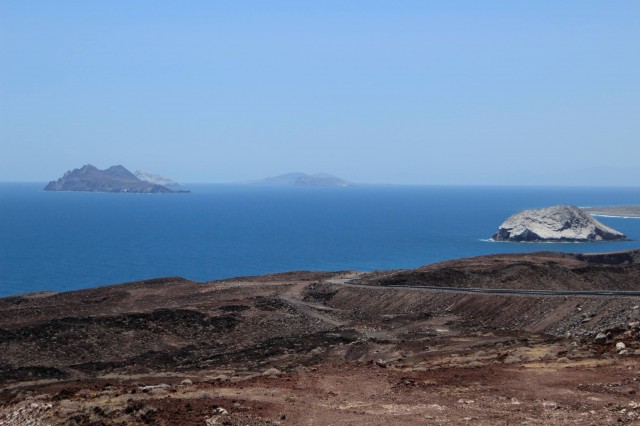 Even the paved roads north of Puertocitos were a thrill to ride. Baja is developing rapidly. 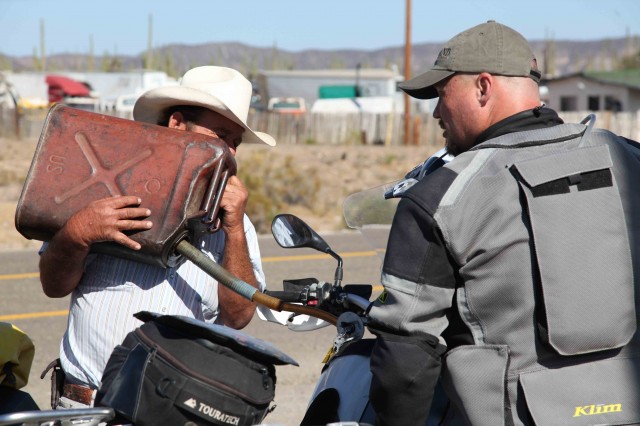 Gas stations look a little different in the remote parts of the region. Spend your gas carefully. 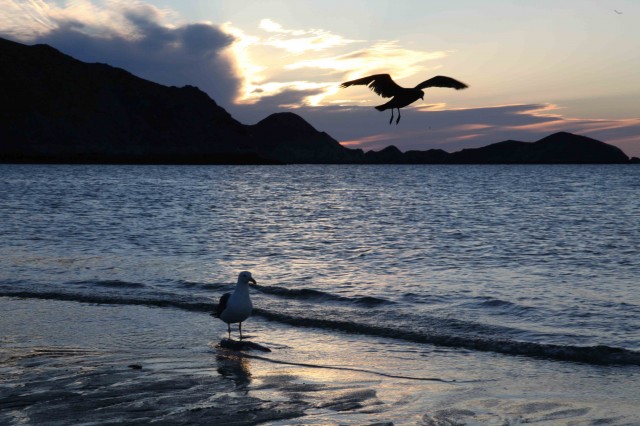