As a long-time fan of Otter Box phone and pad cases, I was a little surprised to see the Colorado-based company enter the seemingly saturated cooler market. That said, I knew they had the resources and design acumen needed to create a winner capable of standing above the competition. After receiving an early sample of their mid-sized Venture 45 cooler, I’d say they created one of the best and most innovative ice chests in the industry.

Well known for their extensive line of protective cases, I assumed the Otter Box cooler would be heavily fortified. The inner and external shell layers are made of thick polypropylene made even more stout with well-placed ridges and reinforcements. Whereas some coolers are shaped with rather crude and doughy edges, every aspect of the Venture’s molding is crisp and precise. From the outside it is a veritable vault and passed the grizzly test to earn its official bear-resistant IGBC certification. 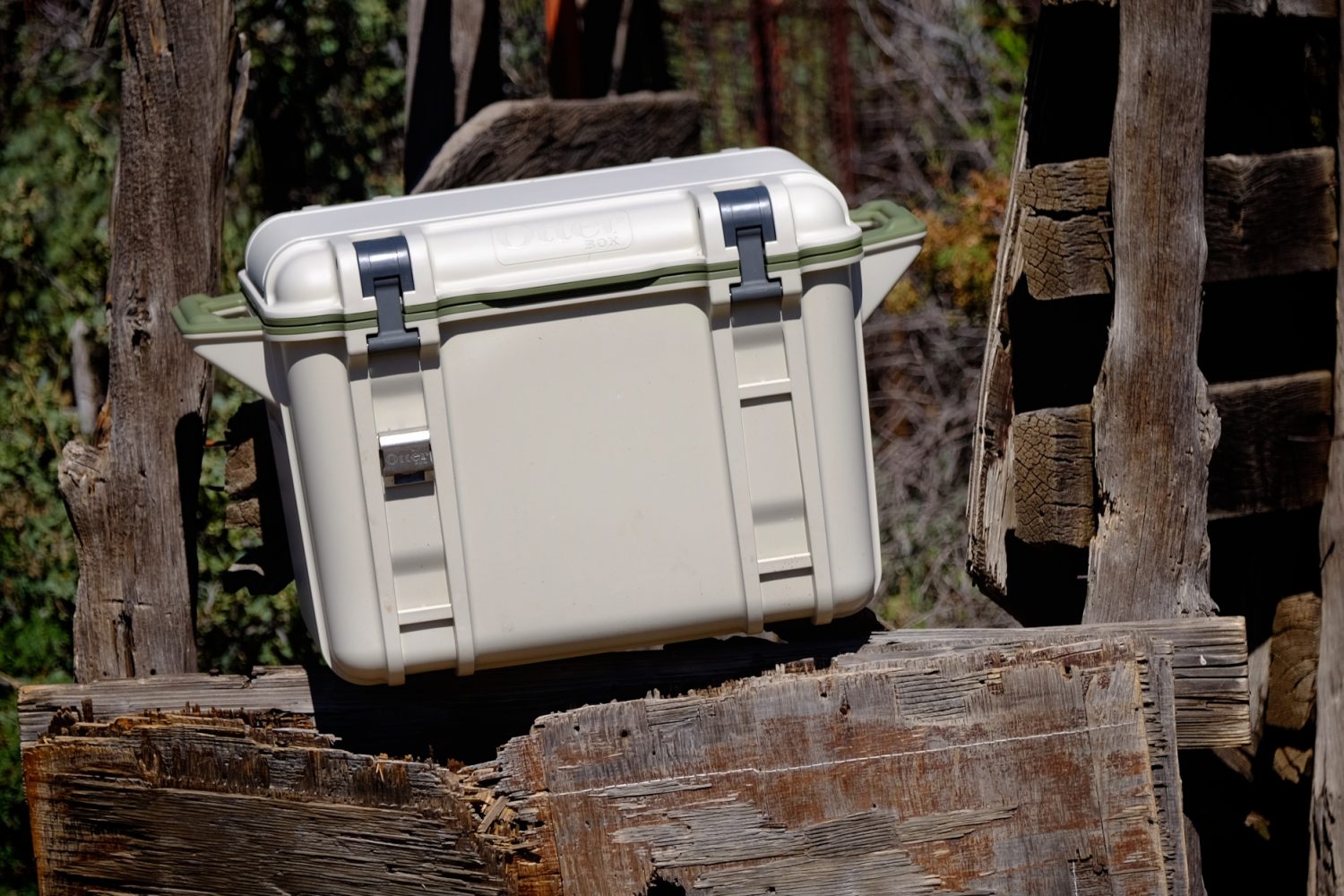 If you haven’t noticed, cooler manufacturers have become somewhat desperate to woo buyers with features I would couch as pure gimmickry. That includes coolers with built-in speakers, elaborate wheeled mechanisms, and even—a blender. Feel free to insert a roll-eyes emoji here. Otter Box used far more design restraint when creating their list of add-on accessories. Never before have I used a cooler in the way I do the Venture. It’s not just a place to drop ice and beers, it’s become a campsite tool.

The unique rails molded into the front and back of the Venture not only add to the shell’s rigidity, they include eight individual attachment points which pair to a number of modular accessories. In all, Otter Box offers more than a dozen attachments to help personalize your Venture experience. From stainless steel locking mechanisms to bottle openers and cup holders, there are countless ways to customize your cooler. My favorite add-ons include the large side table and internal organizers like the slide-in divider and drop-in tray. 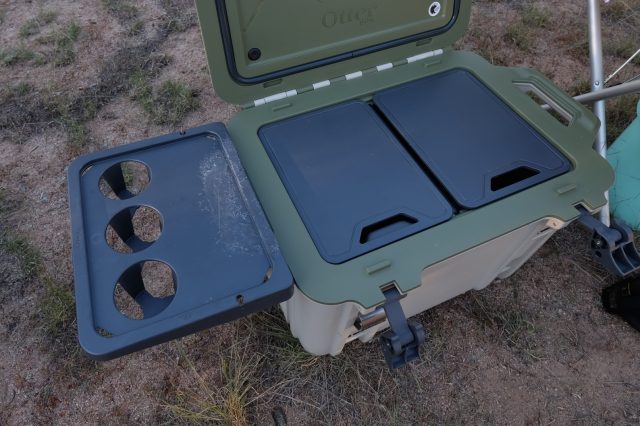 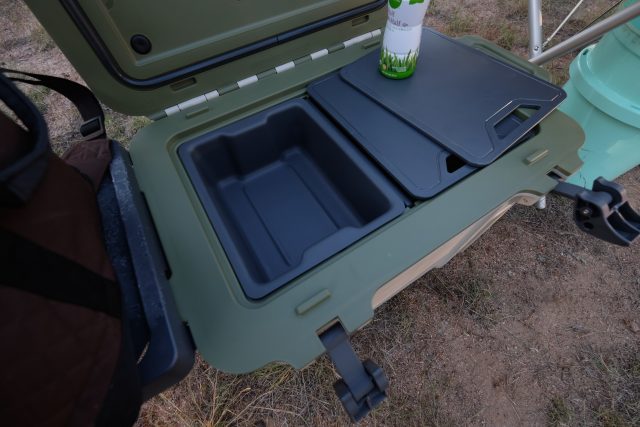 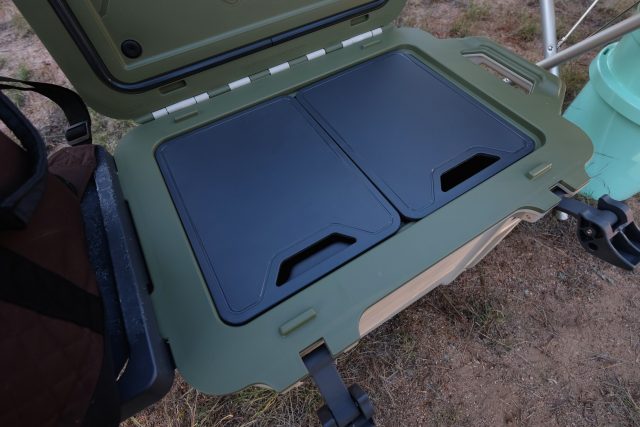 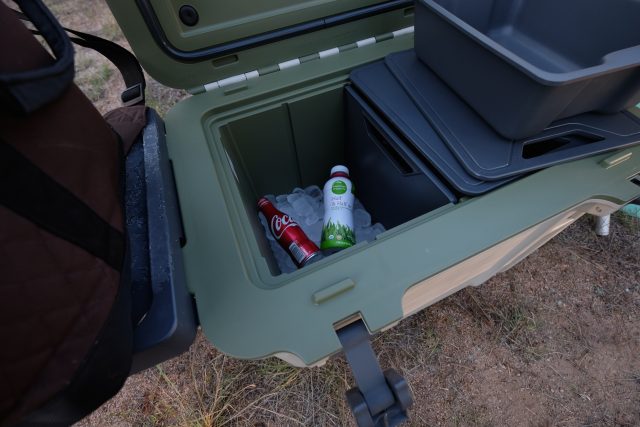 As clever as the user features are, it is the ice retention of the Venture 45 which impressed me the most. With the tail end of summer still producing temperatures in the mid-80s, it was a perfect time of year to see if the Otter Box could keep my beers cold for an extended trip. I loaded the 45-quart interior with a 12 pack of brews and 20 pounds of ice. I then placed the unit in my backyard where it would get a split mix of sun and shade throughout the day. Tedious as it was, I opened the lid three times each day simulating efficient, but not excessive use of the cooler. After 13 days, the ice was completely melted, but the water within still measured 40ºF, a safe temperature for food storage according to the FDA.

Just looking at the Venture 45 when I plucked it from the box, I knew it was going to perform exceptionally well. The design creates a uniform layer of insulation with 2 inches of high density foam throughout the body and lid. A heavy-duty rubber seal helps retain the cool temps within and the dual cam-lever latches are easy to use and fold flush with the lid so they don’t snag or catch on anything. 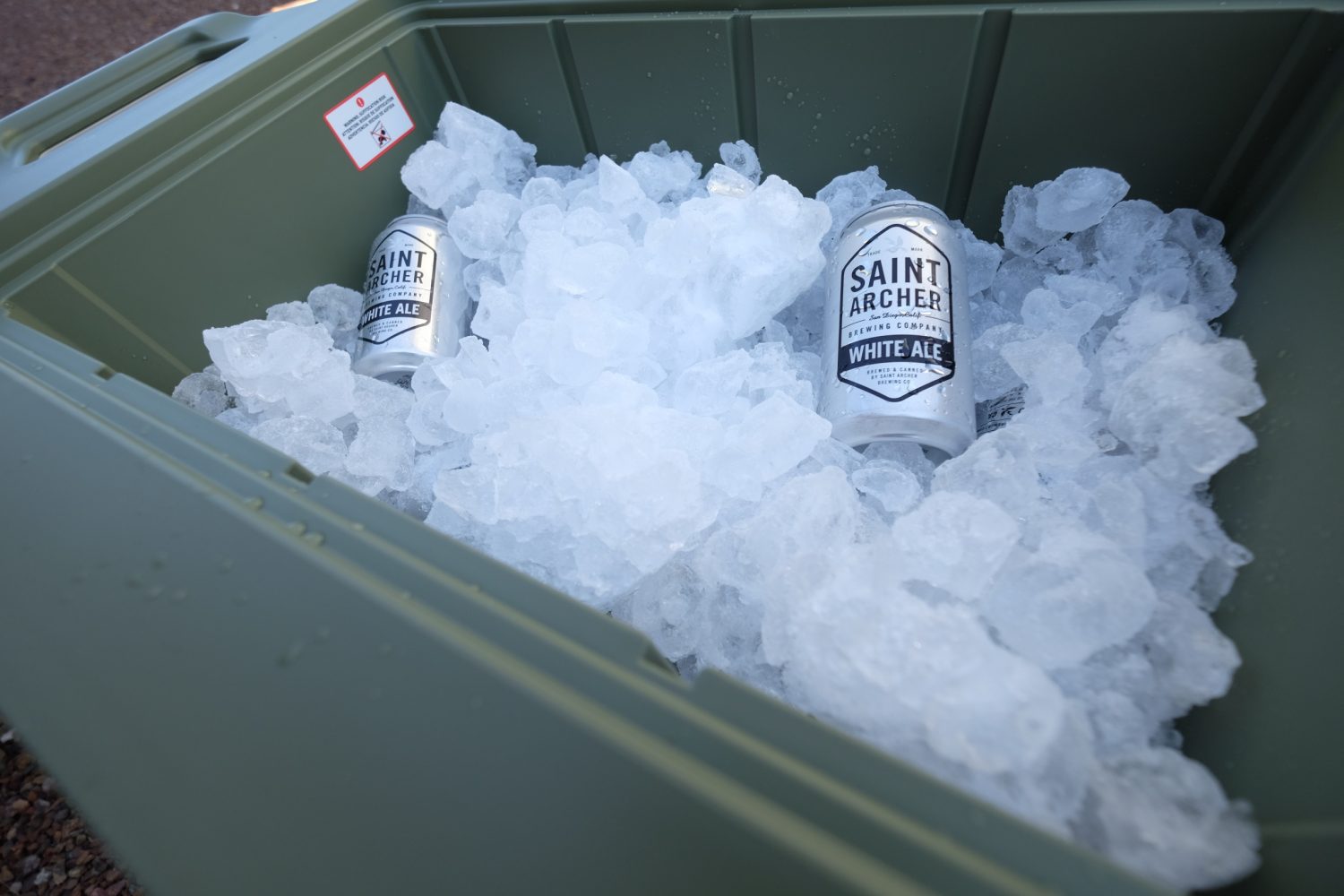 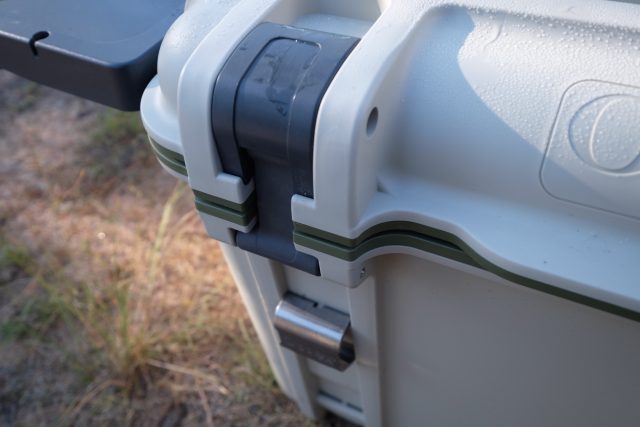 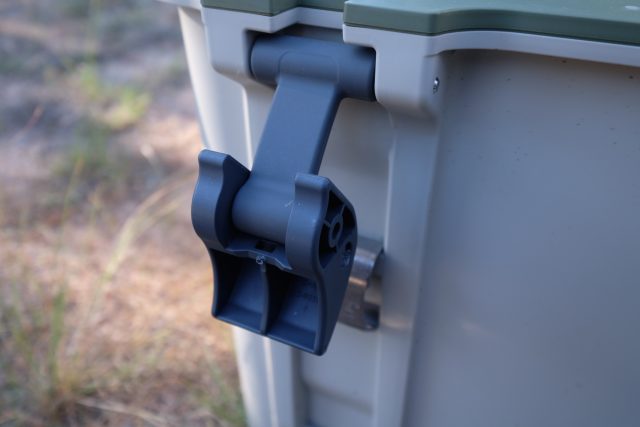 In my opinion, every cooler should come with anti-slip rubber feet, as does the Venture. I admit it makes sliding a fully loaded cooler in and out of a vehicle nigh impossible, but then again, do you really want 80 pounds of plastic and ice sliding in transit? To keep the cooler secured in place, the large handles make for secure tie-down points and each end fits two hands for a balanced and comfortable carry. Other less obvious design details include a tapered interior to promote quick and complete draining through the high volume drain.

As with any product, even the near perfect Venture 45, there are a few elements to the design worth considering before purchase. At 27 pounds it is a touch on the heavy side, and it does have a slightly large exterior relative to the 45-quart storage capacity. Because the handles don’t fold into the body, they too compound the large size. Those are not negatives, but something to evaluate before making your purchase. 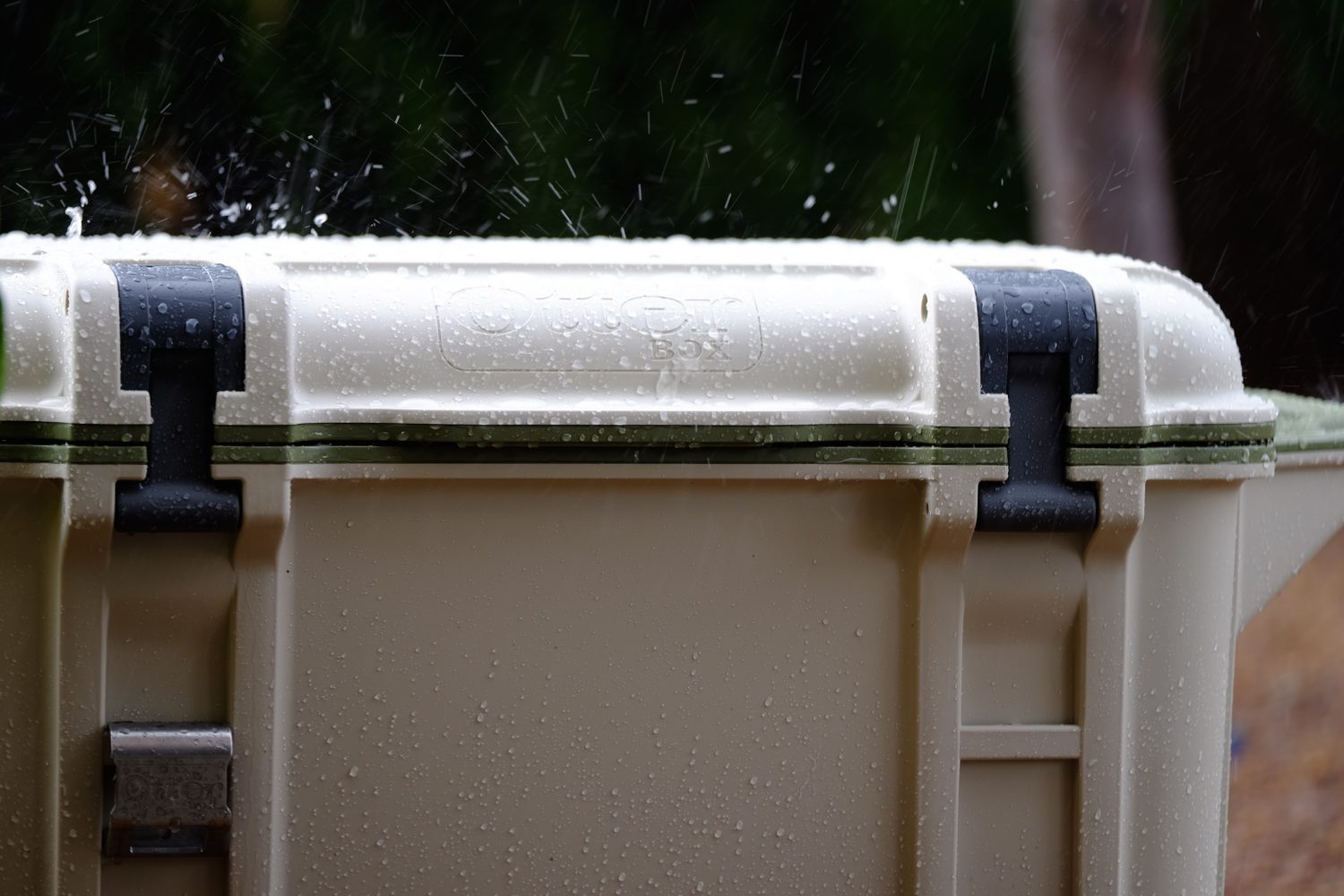 It’s not very often I get excited about a cooler, but the more I use the Venture 45, the more I want to use it. The ice retention is nothing short of incredible, and while the additional accessories don’t seem necessary, I find they’re my favorite part of the design and greatly add to the utility of the system. I even like how the exterior of the cooler is finished to a high sheen. Other coolers with a more porous exterior are tough to clean and stain easily.